Sandy Komito started his Big Year in 1998 with a Code 5 (aka - pretty damn rare) bird - the Nutting's Flycatcher. This bird even made it into the movie. It's a Myiarchus flycatcher, and it's a tough id - only sublty different from the other birds in this group. It's best told by the tail pattern, and by voice - a characteristic "wheep"!

Sandy saw his bird at Patagonia Lake - but this bird was being reported from Bill Williams Refuge near Lake Havasu - typically heard calling at sunrise, and sometimes also seen. It's presumably the same bird that overwintered the previous winter. It was first seen this winter on Nov 30, 2012 by Lauren Harter. But recently, it hadn't been reported since Weds. It's a 5 hour drive from Phoenix, which meant getting up at 3 am...(unfortunately, this will be a continual theme in pretty much all of these posts...)

Coffee in Parker at the Crossroads Cafe at 6am. This place is not Starbucks. But I think my coffee (black, polystyrene cup to prevent the acid from dissolving your hands) actually came with change from a dollar note. Still - requisite amount of caffeine (the finding and drinking of which will also be a continual theme in these posts...)

Planet Ranch Road is the entrance to the Bill Williams River refuge, and, it's not a very good road. The condition was, at best, challenging. After getting a flat tire yesterday on a dirt track, I was worried my car wouldn't make it. They're grading the road (which means you need to park off the main road in case they come by while you're not with your car, and presumably push it into the canyon.) It's also scarily steep in places. I gave up at about 1.5 miles - and walked the final 0.5 mi. 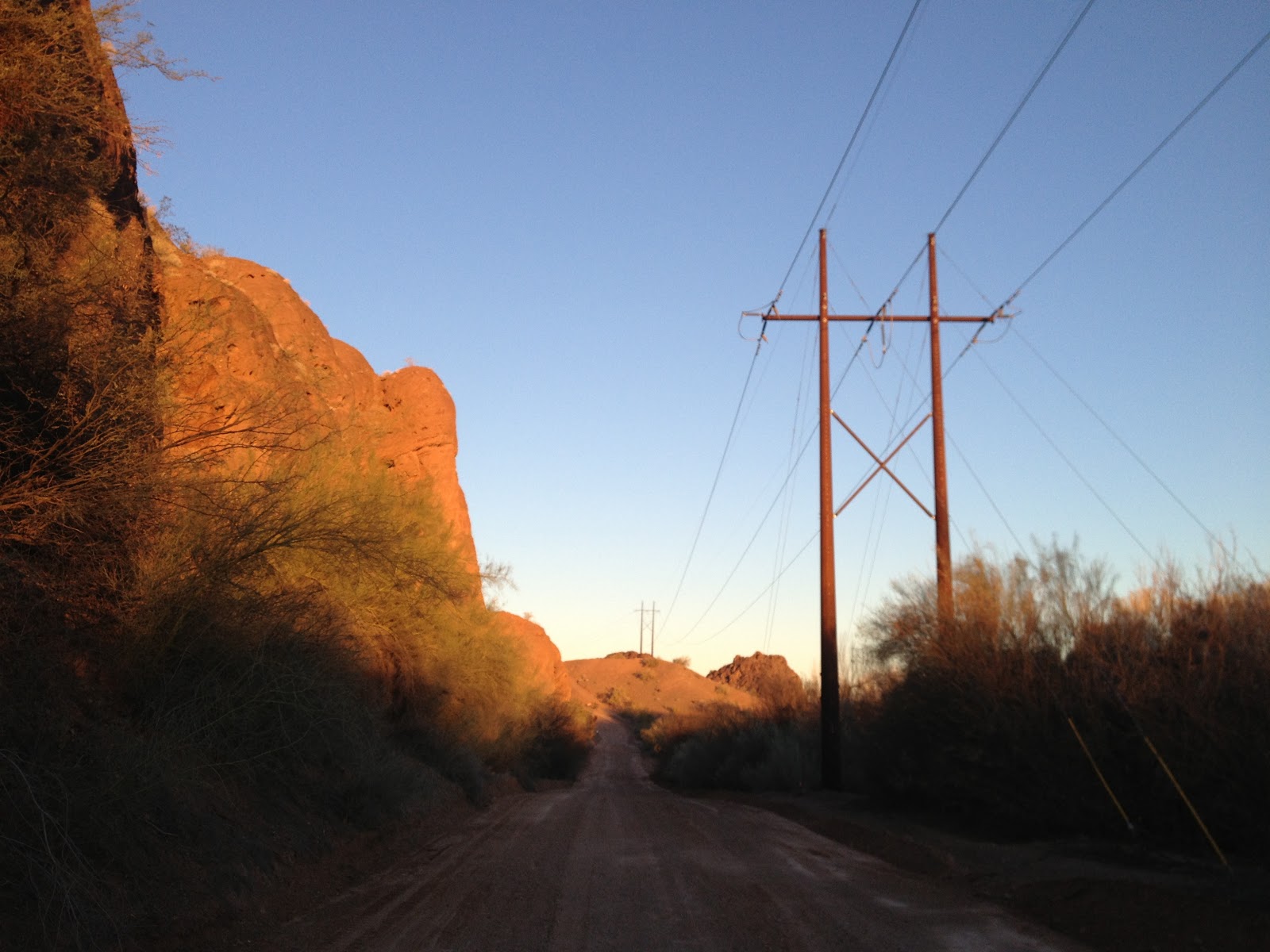 I stood nearby the double pylon post as instructed. And waited. It was cold - 40 degrees - as it takes some time for the sun penetrate the canyon.

What? Whoa! Pretty much the first bird call I heard was at 7:45 - the "wheep" of the Nutting's. I couldn't quite believe it would be this easy! Was I mistaken? Could that really be it?

But would it show? I waited patiently, and finally saw some movement. And saw some Nutting's.

The Phainopeplas started calling shortly afterwards (the Nutting's was louder, with a more ascending tone.)

The bird continued to call while I was there, at: 7:50, 7:59, 8:04, 8:18, 8:33 (after which I left.) The bird was initially heard and then shortly afterwards seen on the left (NE) side of the road just past the double pylon / posts (labelled #44) which are just past the mile 2.0 marker. The bird then moved further up the road, and then crossed to the right side, where it stayed in view for almost 10 mins flitting around in a large mesquite, sometimes low, almost on the ground. The bird seemed quite active, moving around frequently, and sometimes being driven away by a Phainopepla. 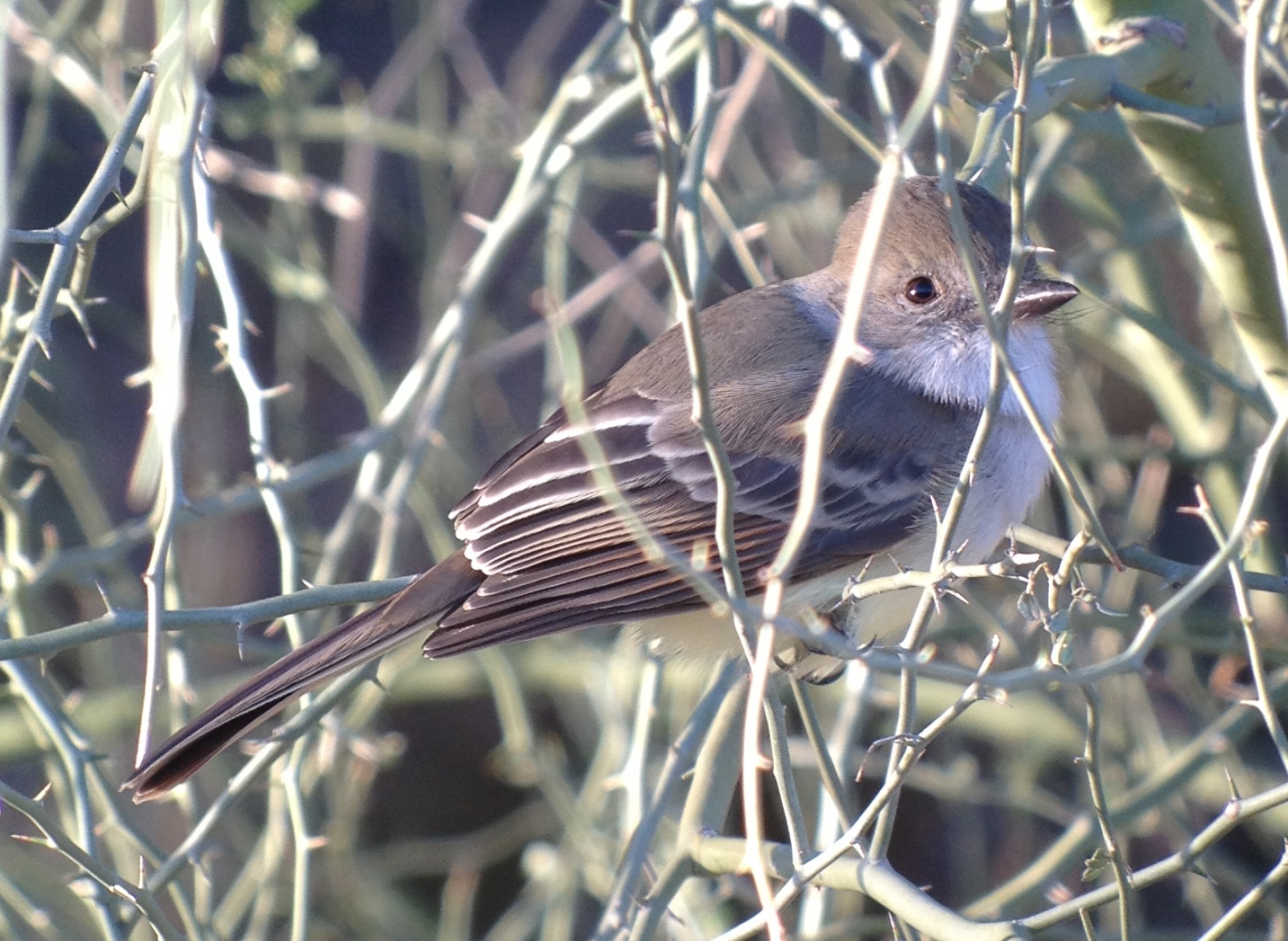 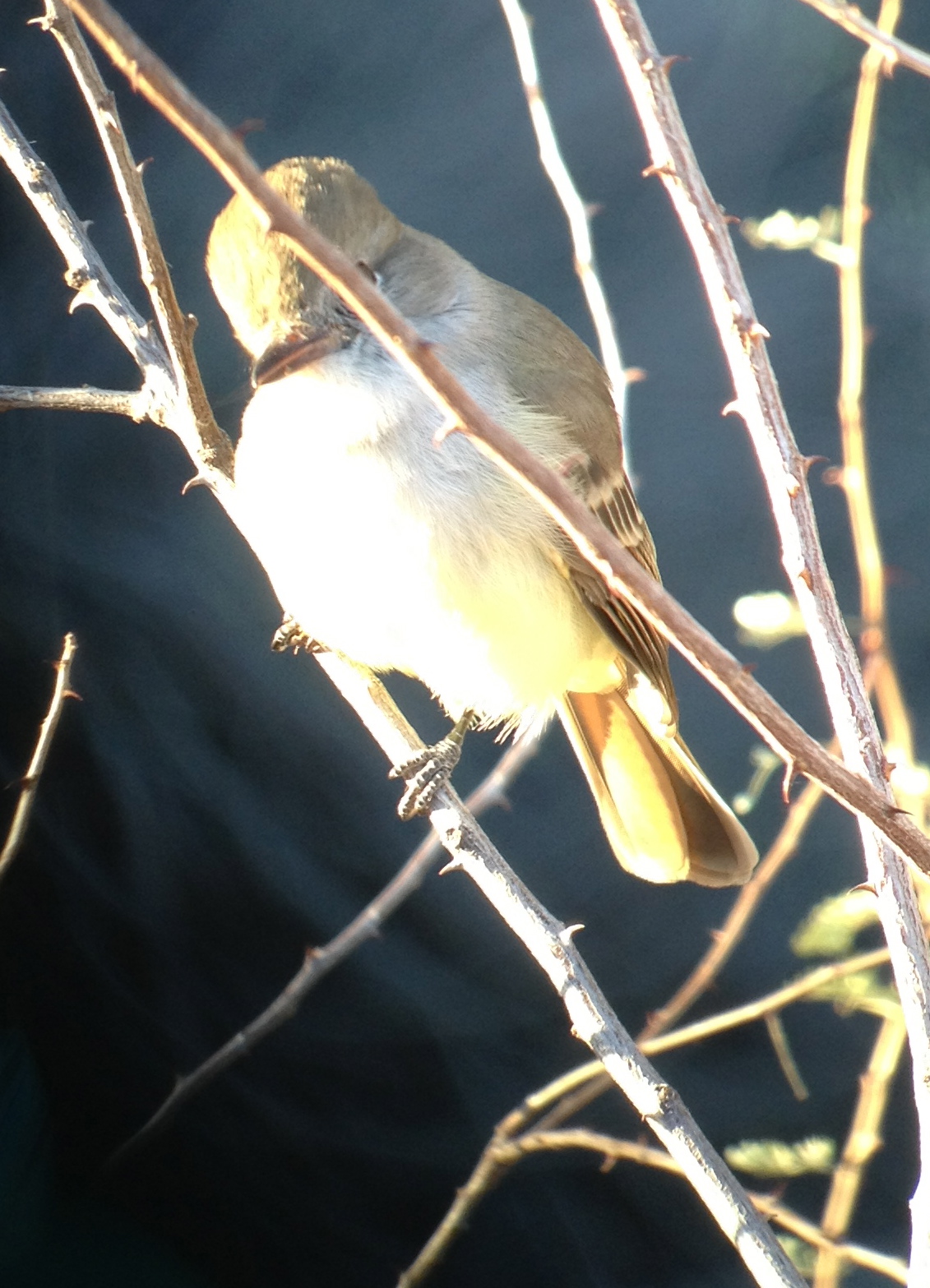 Plumage details: quite bright yellow breast, and olive-green back. With the bird facing me, I could see that the inner brown of the tail feathers underneath extended to the end of the tail (in Ash-throated I believe these end before the darker tip of the tail.) There was a hint of yellow in the folded secondaries.

This has to rank as one of my favorite birding experiences. It was a long drive from Phoenix, and I really wasn't confident the bird would even show. The refuge is very beautiful, especially as it comes to life with the sunrise, and having the bird to myself was magical. It was probably 10' away at times, and incredibly confiding.