ARIZONA? IT'S ON THE WAY TO MINNESOTA

I should be writing this from home (MA.) Actually - I shouldn't be writing this at all! I should be sleeping, catching up with Gerri and the cats, hanging out at my favorite coffee shops (1369 and Simon's if you're ever in need of Cambridge coffee recommendations!) Instead, I'm still on the road - for 3.5 weeks with 1 week's worth of packing! You do the olfactory math!

Alaskan volcanoes and fog really screwed up my schedule. So, instead of heading home before Alaska Part II (Nome), I'm squeezing in a side trip to AZ and then MN. AZ is for the late-arriving flycatchers, and more goatsuckers (a rare Buff-collared Nightjar was recently reported from Madera canyon) as well as tracking down that pesky Mexican Chickadee. MN is for all the warblers that I missed in migration.

Arizona is my favorite place to bird. The scenery is stunning, and the birding really is heavenly... 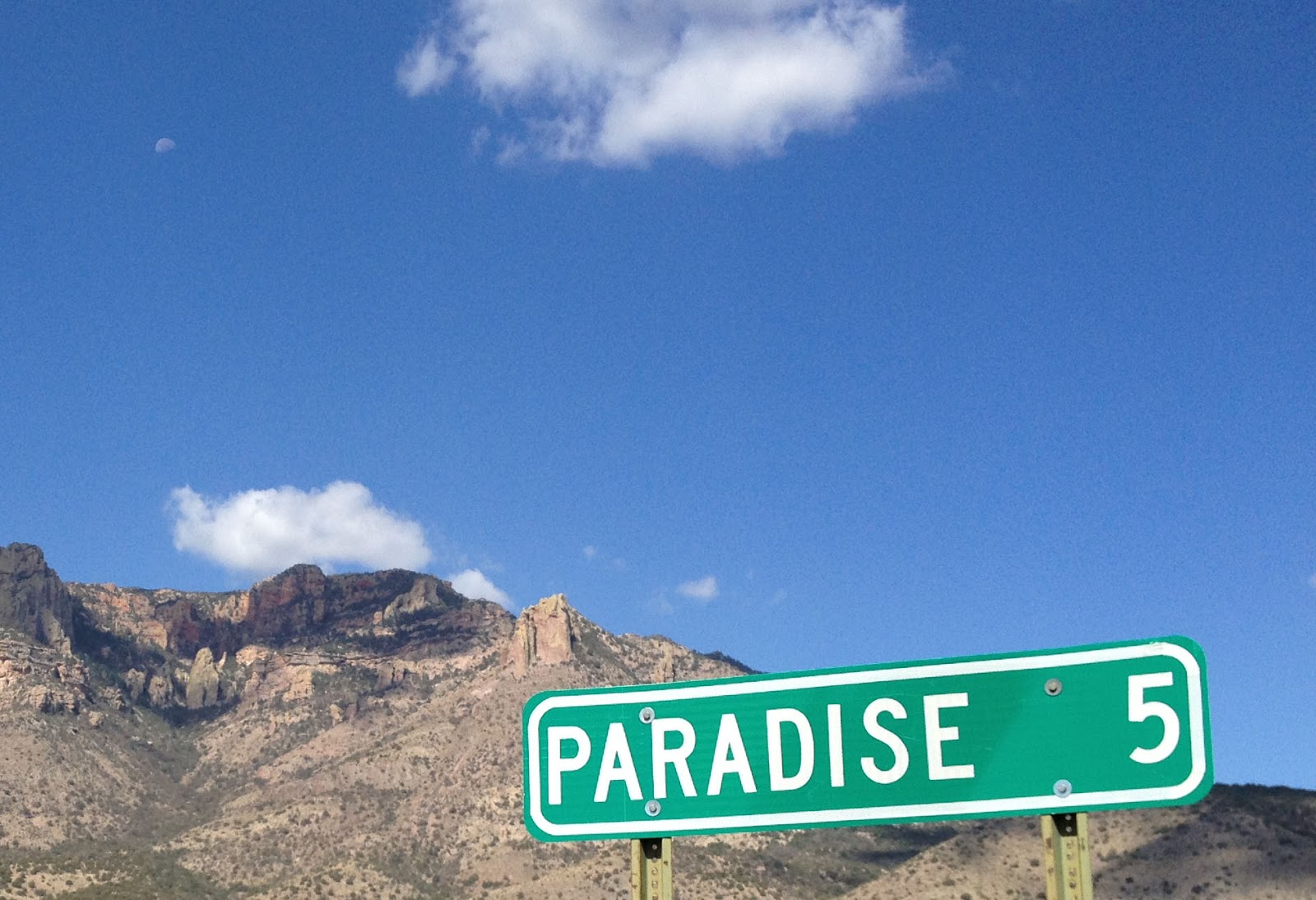 Paradise is in Arizona (Chiricahua Mountains) 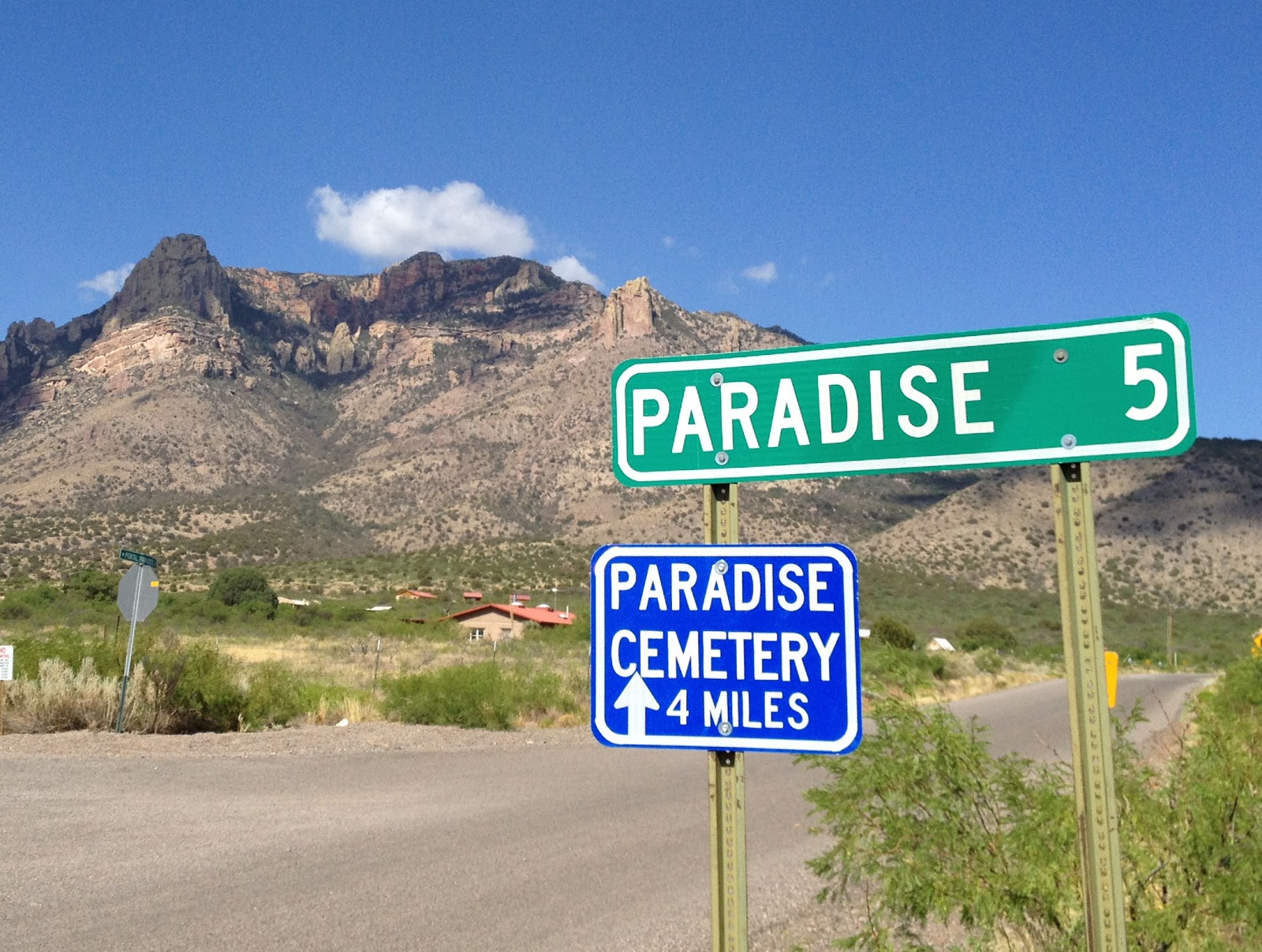 What? People die in Paradise?

The highlight of this quick trip was the owling. I've tried for Northern Pygmy-owl at least 5 times this year, and come up short. This time, I went back to the same places - Huachuca Canyon and Miller Canyon - determined to see this little gem of a bird. Northern Pygmy-owls are diurnal, meaning they hunt during the day. At this time of year, they're probably very active with hungry nestlings to feed.

Huachuca Canyon: (got through the military complex again - despite the eyebrow-raising British accent) arrived at the parking lot. No owls. It was a hot day (it's been near 100 most of this week), so I sat and waited. "Took...took...took...took..." I heard it - Pygmy-owl calling. It did this twice during the 2 hours I was there. Very exciting, even though the bird never showed itself.

So - on to Miller Canyon. Tom Beatty, the owner, has reported an active nest recently - which is the empty hole I saw last time. With some excitement, I made the climb back up the canyon. As I approached the nesting hole, I could see: 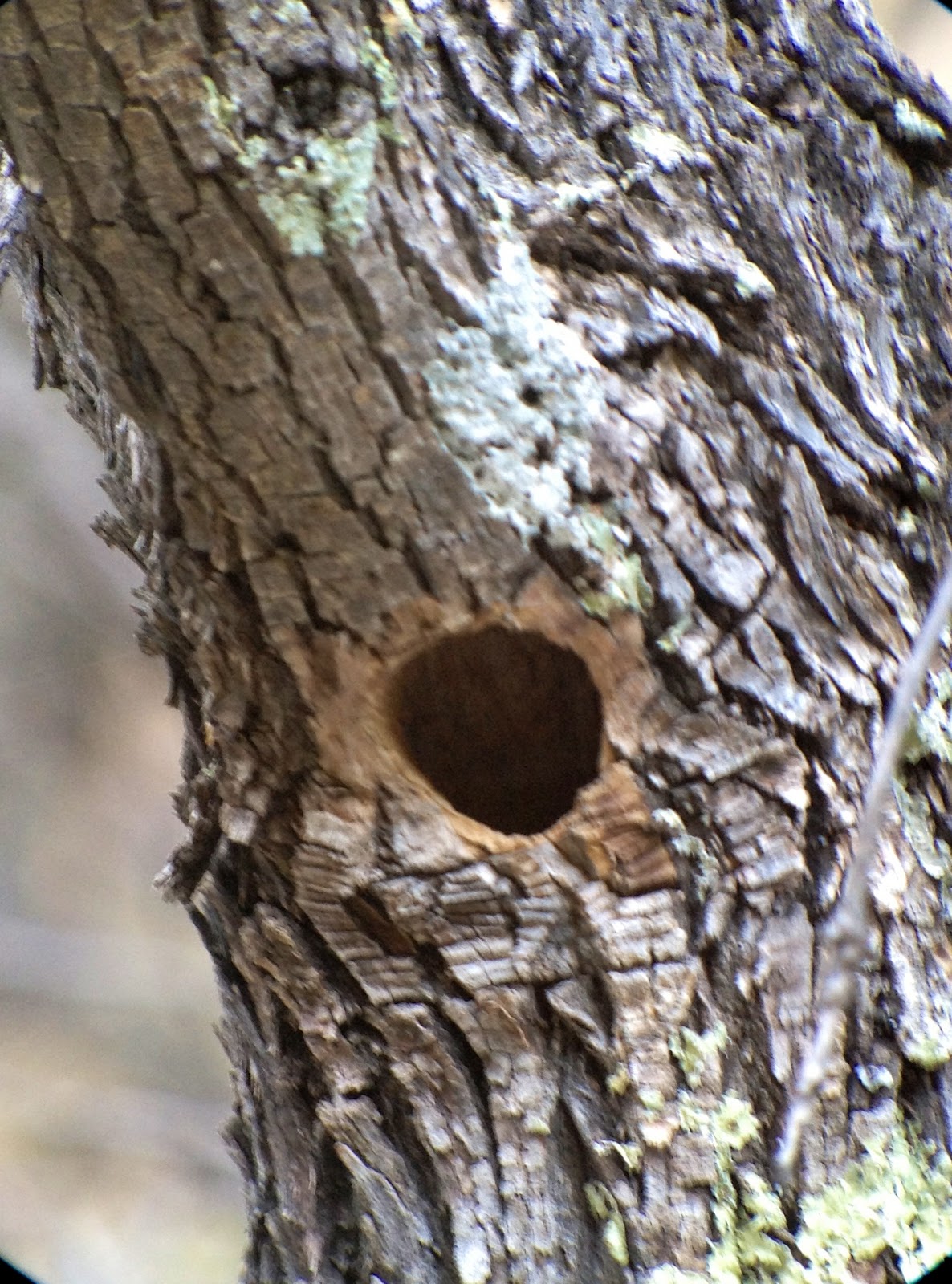 Deja vu, all over again.

I sat down far enough away and waited to see if anything would turn up. Suddenly - as I was watching the hole, this appeared: 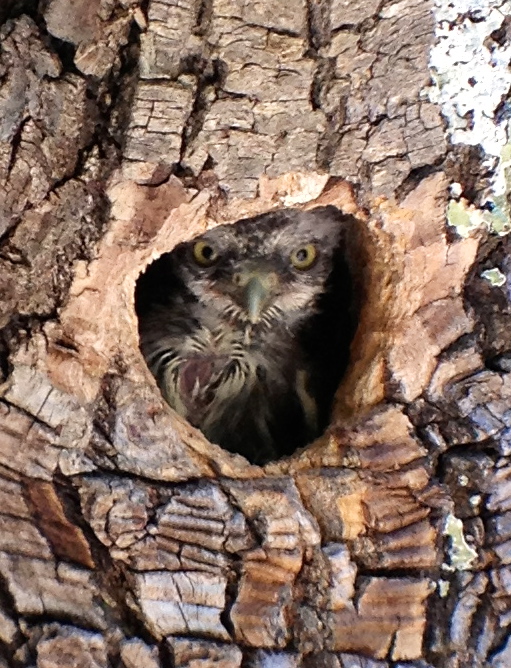 Owlet. Baby Northern Pygmy-owl!
(Actually, there were two - I suspect one was standing on the other!)

And it wasn't long before an adult showed up: 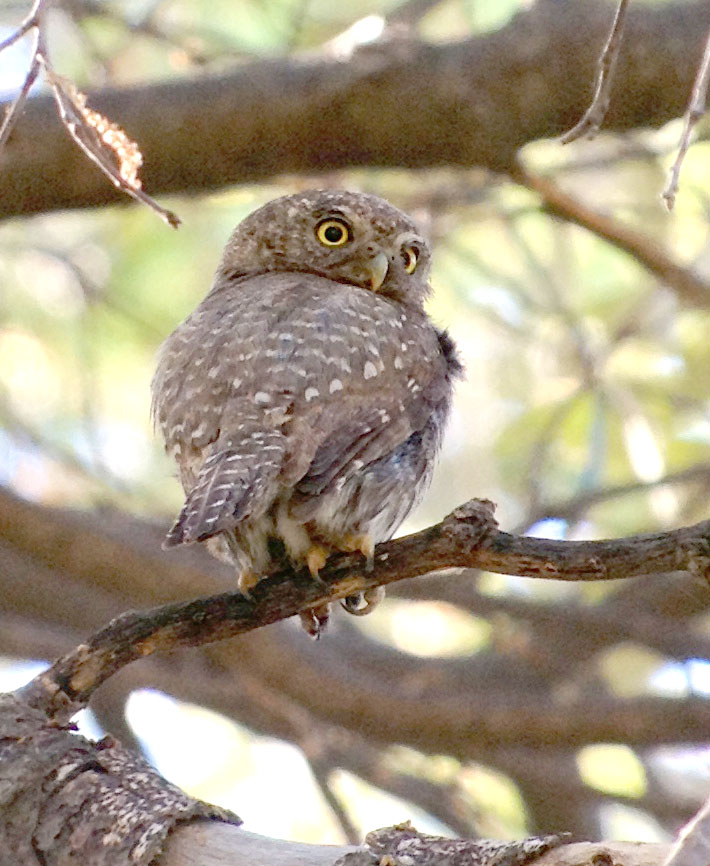 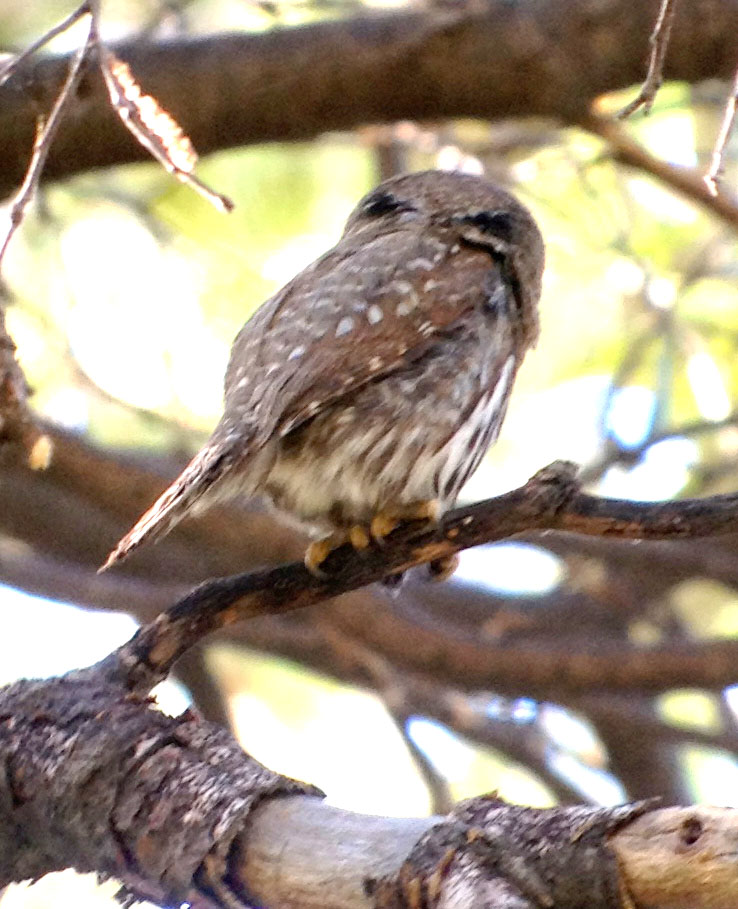 Pygmy-owls have false eye marks on the back of their heads.
Helpful for panoramic menacing.

The owlets were in for a treat - dinner was a big yummy lizard... 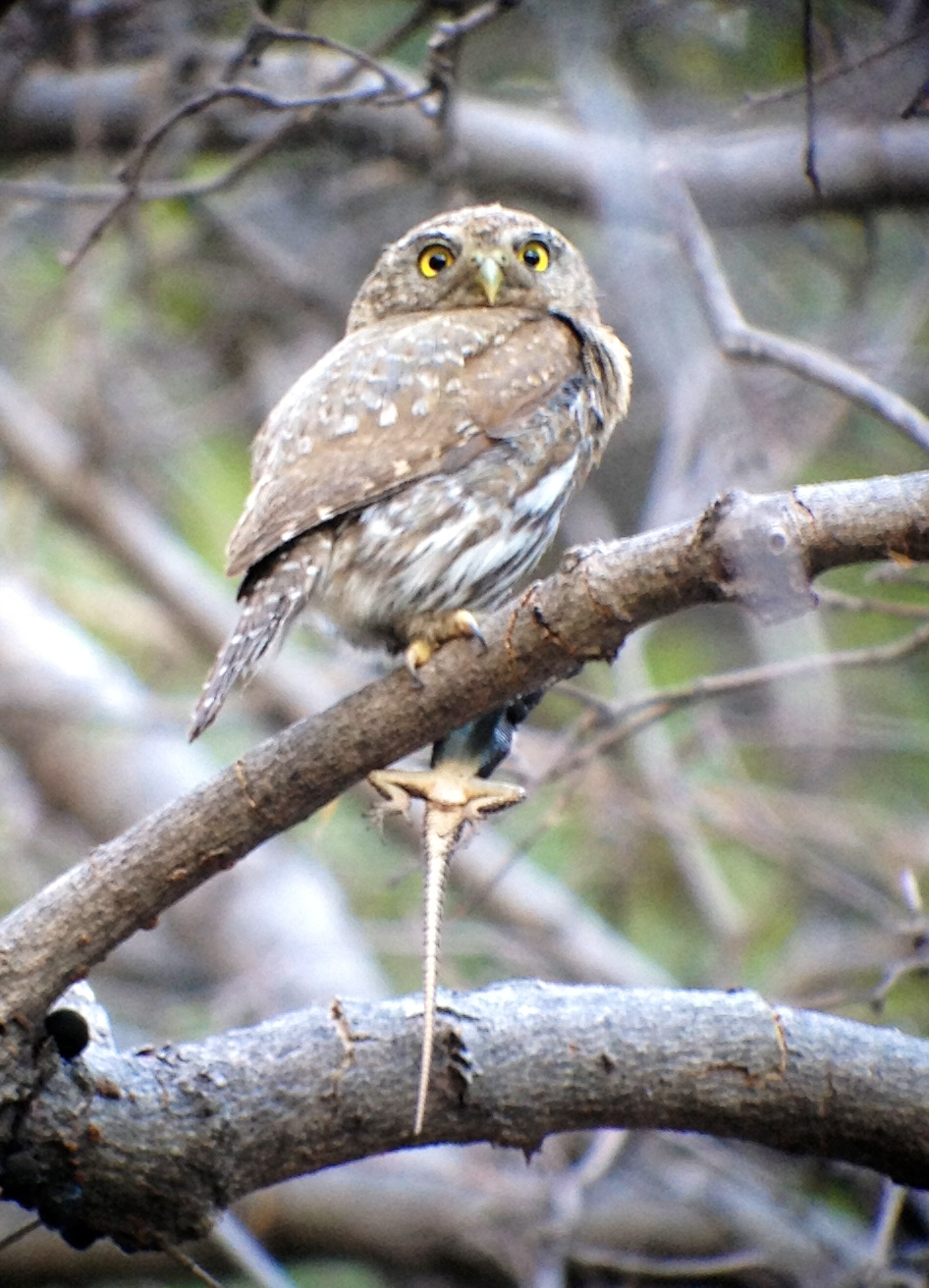 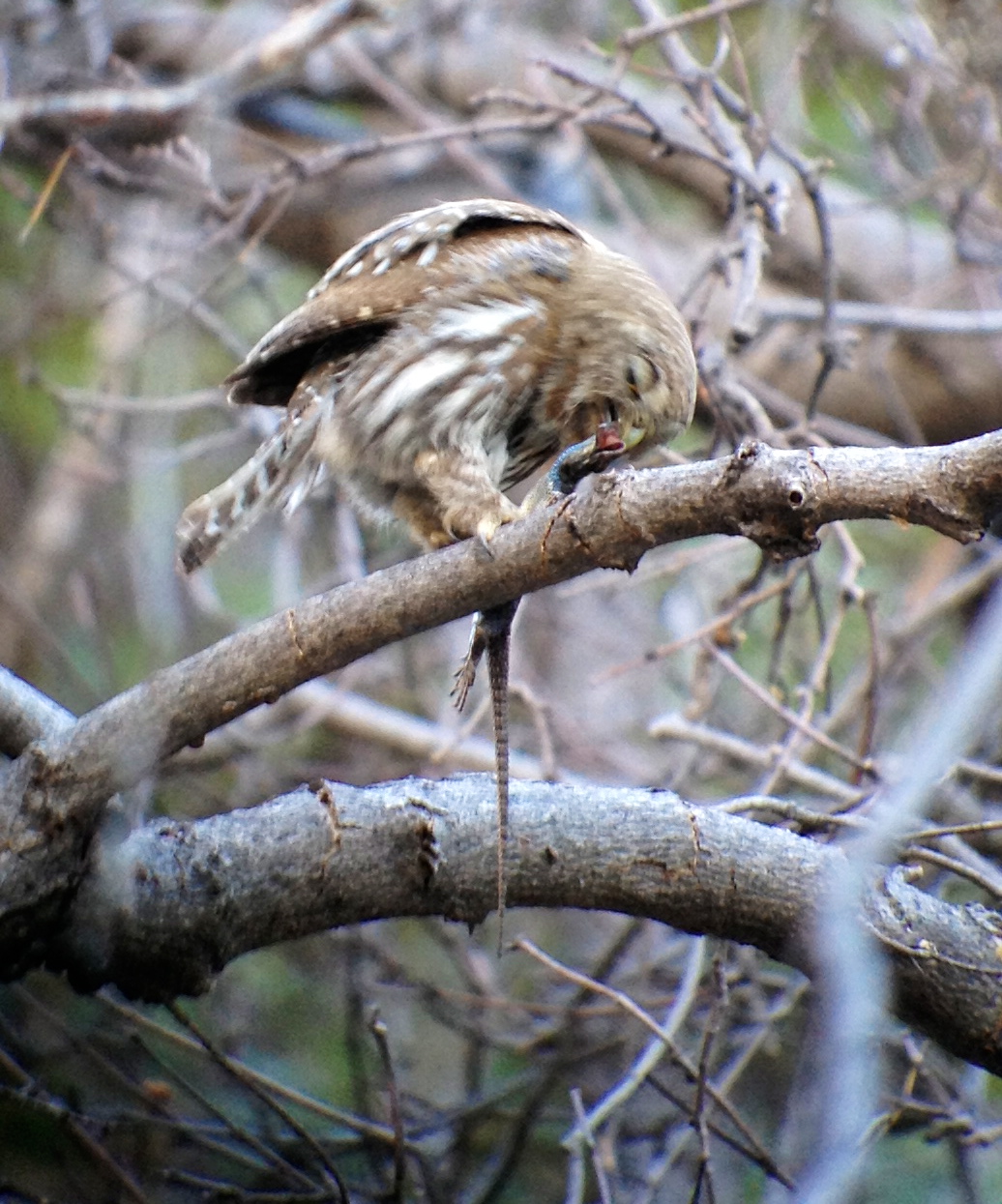 Here's a movie of the owl, just before it takes the food to the hungry owlets. It's calling - probably to alert the young.

While at the Chiricahuas, I heard lots of Elf Owls around the Portal Lodge, and finally managed to see one using a flash-light. Elf Owls are our smallest owl - just 5-3/4" long. I didn't manage to get a photo - the bird didn't hang around while I was manipulating scope, iPhone, and flash-light, but I did manage a pic of a sleeping Cassin's Kingbird in the same tree... 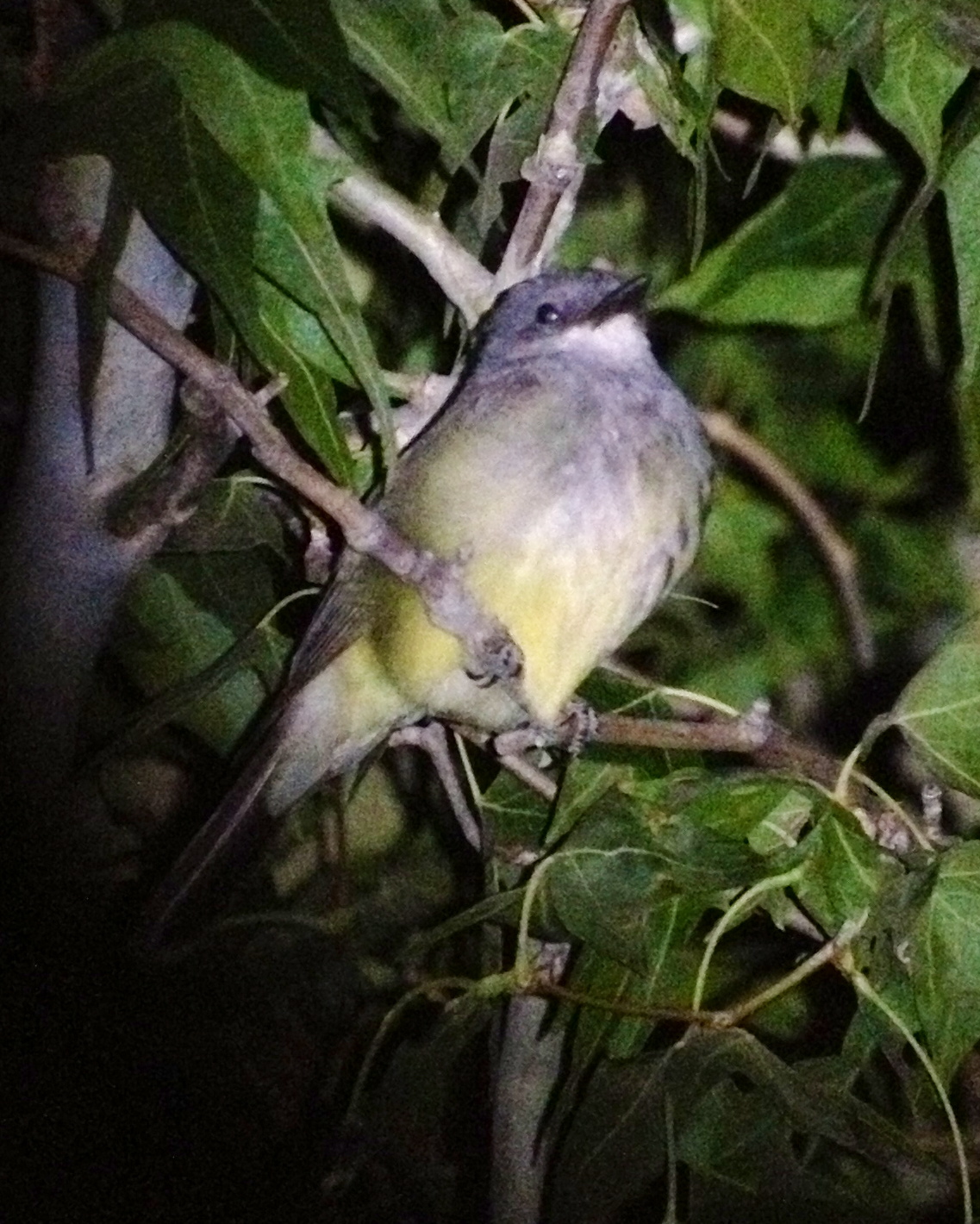 Not an Elf Owl.
Cassin's Kingbird - roosting in the Portal Lodge parking lot

Other night birds were 2 new goatsuckers for the year: Common Poorwill, and the rare Buff-collared Nightjar. I didn't see either bird, but heard both well.

It's difficult to plan a spring trip to Arizona as birds arrive in very definite phases. Two birds that are right at the tail end of migration are both flycatchers, and I managed to catch up with them on the first day: 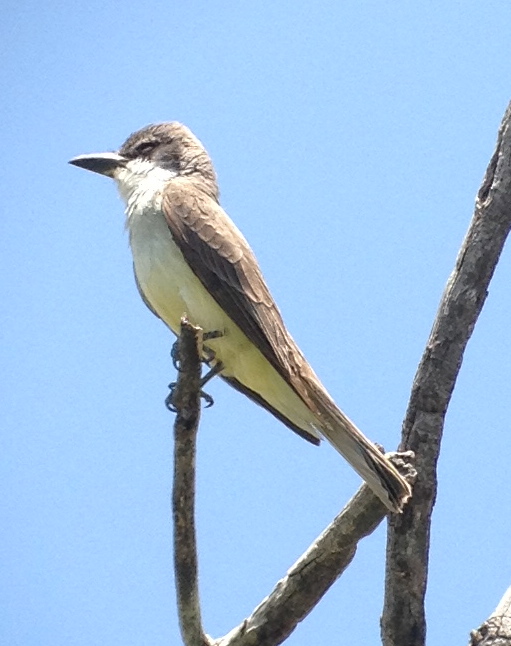 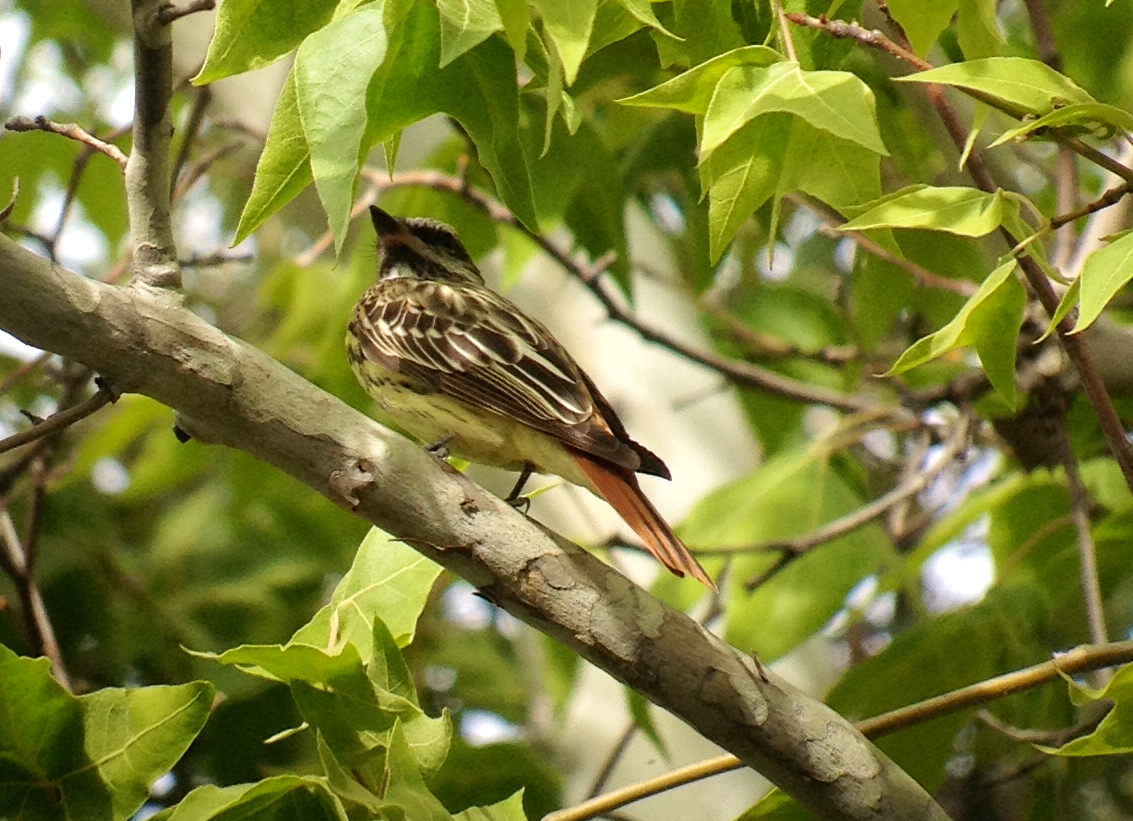 Sulphur-bellieds have a unique call - they sound like a squeaky toy:

I've mentioned the Chiricahuas a few times, which meant I made the long trek to the very far south east of the state - for Mexican Chickadee. I missed this bird last time after a *lot* of searching. I was back again for a repetition - only this time I got up much earlier!

There aren't many places to search for this bird, as, sadly, much of the upper Chiriacahuas looks like this: 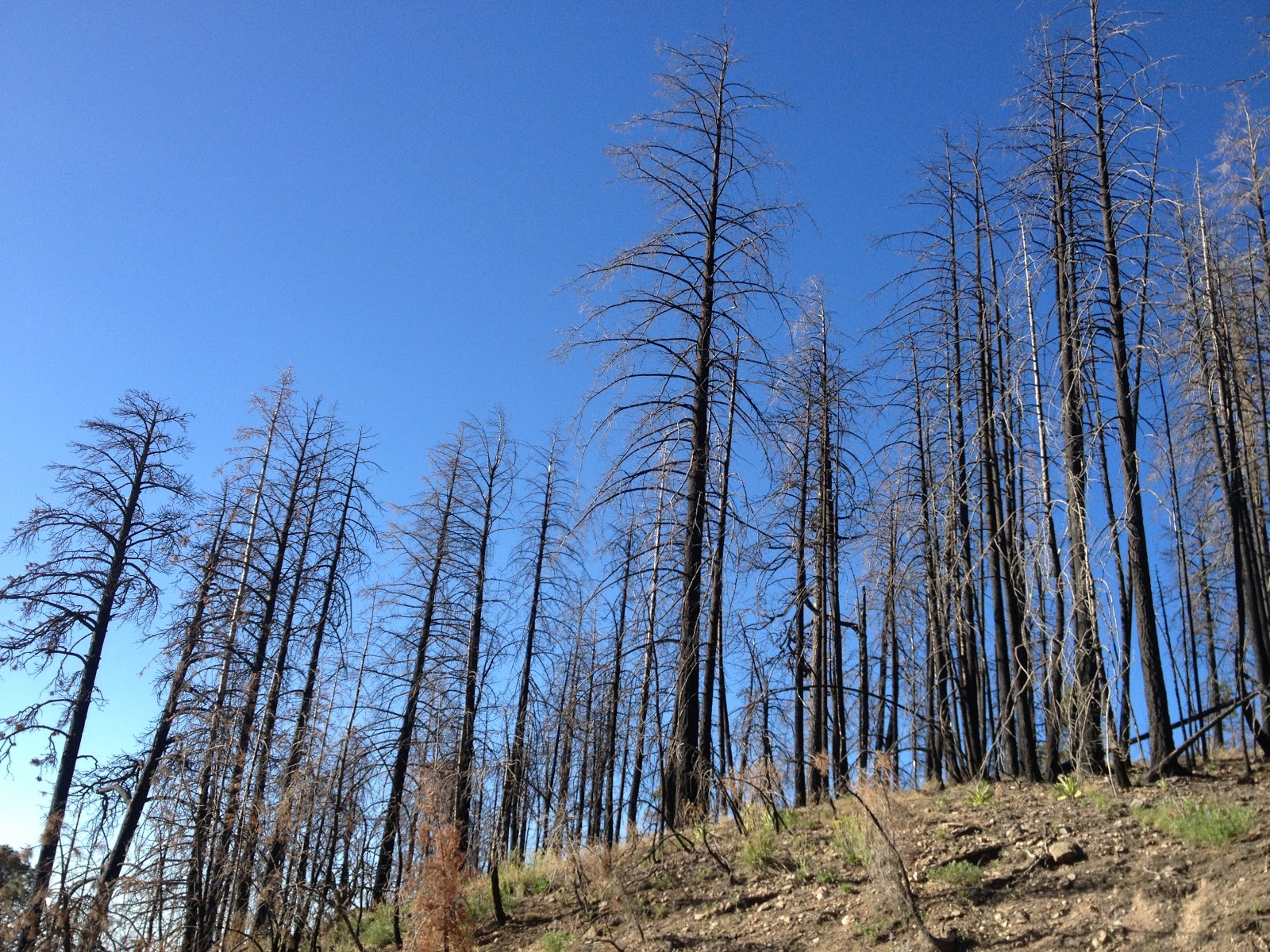 I started at Turkey Creek at 5:30, and after 15 minutes was rewarded with a bird singing. It was high in a fir tree, and never moved or came out, or showed itself. Success! - and a great start, I remember thinking. I didn't know at the time, that in the next 3 hours of searching multiple places, this was all I was going to get - a single heard bird. The pressure was off - but I sure would like to see one of these little fellows. Apparently they're nesting now, which makes them more difficult than usual. Again on this trip, Northern Pygmy-owls stole the show - I had two birds calling during the middle of the day.

It was a short visit - but packed with some great birds and wonderful memories. It's fun (and frustrating) chasing rare birds, but slowing down and spending an afternoon watching owls going about their business was one of the highlights of the year for me. Thank you again Arizona... 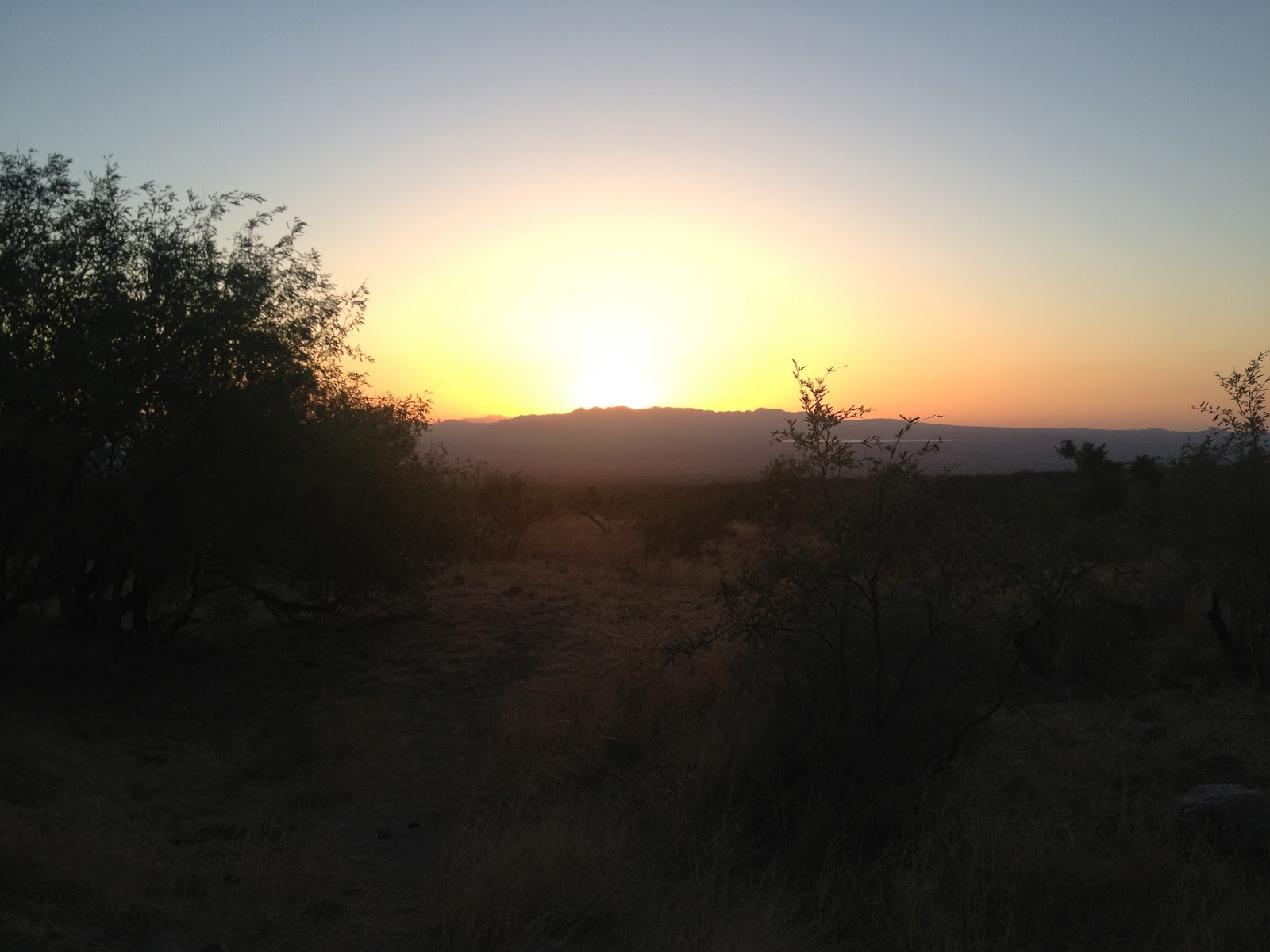