#699 AND THE SEARCH FOR THE HOLY QUAIL

I'm back in California this week for some hard-core pelagic trips. Yesterday I was on Debi Shearwater's boat out of Monterey. This was the same trip that a week ago saw Hawaiian Petrel - a life bird for many on the boat including passenger and Big Year record-holder, Sandy Komito. I was hoping the Petrel might stick around. And on Monday, I'm heading out of San Diego for a 56 hour pelagic. Yikes - that's a lot of sea. And hopefully a lot of good birds.

Pelagic trips are the proverbial box of chocolates. You never know what you'll get until you get on the boat and open the box. Sometimes you get a delicious truffle. Or a Swiss ganache. Other times, some other bastard's eaten the lot and it's empty. Yesterday's trip from Monterey was the latter. The weather was great for humans (clear, bright, no wind) and terrible for birds, which were few and far between. But - I did get a pretty awesome life chocolate - Blue Whale. We saw at least 6 of these giants off Santa Cruz county. 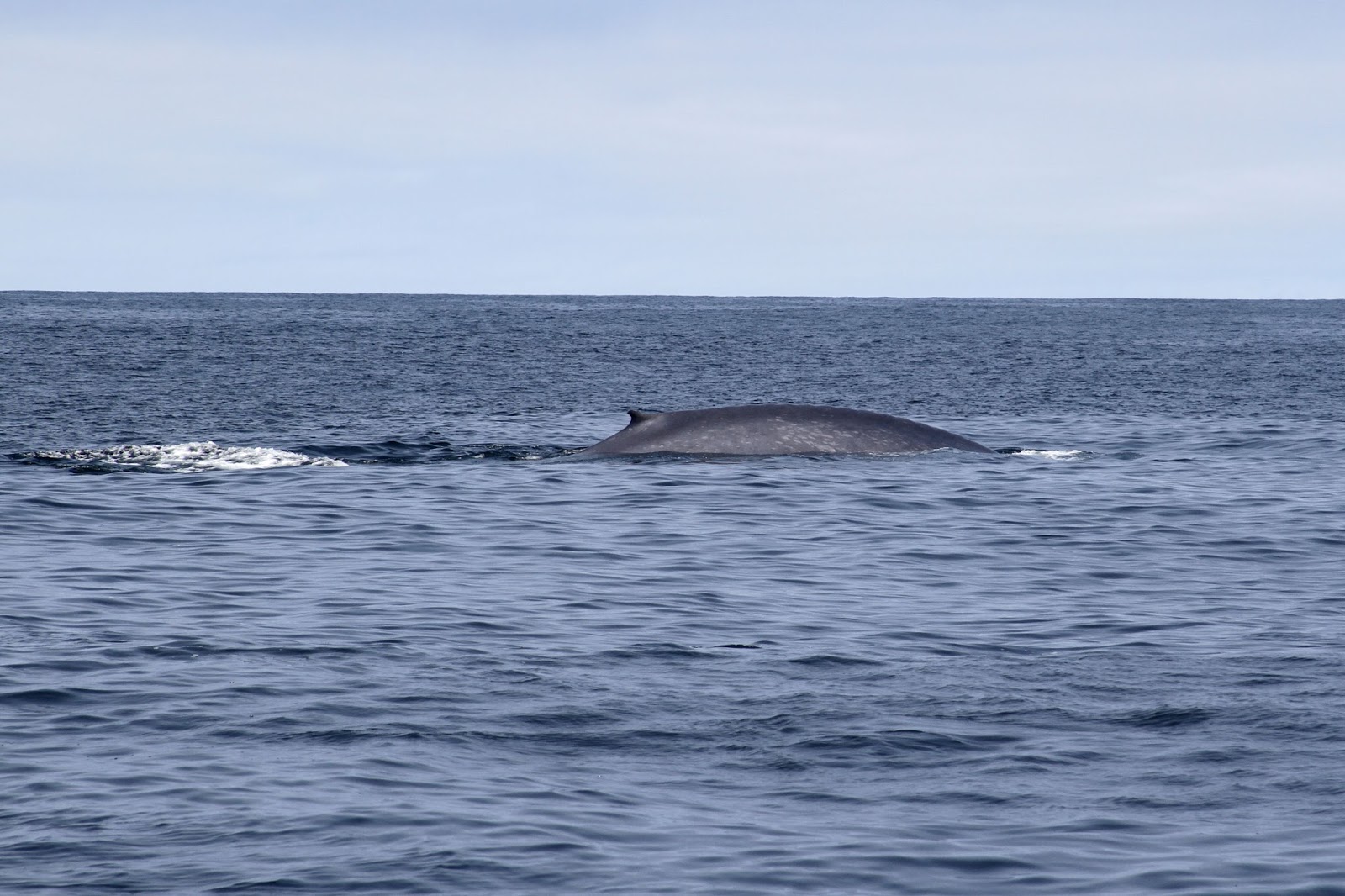 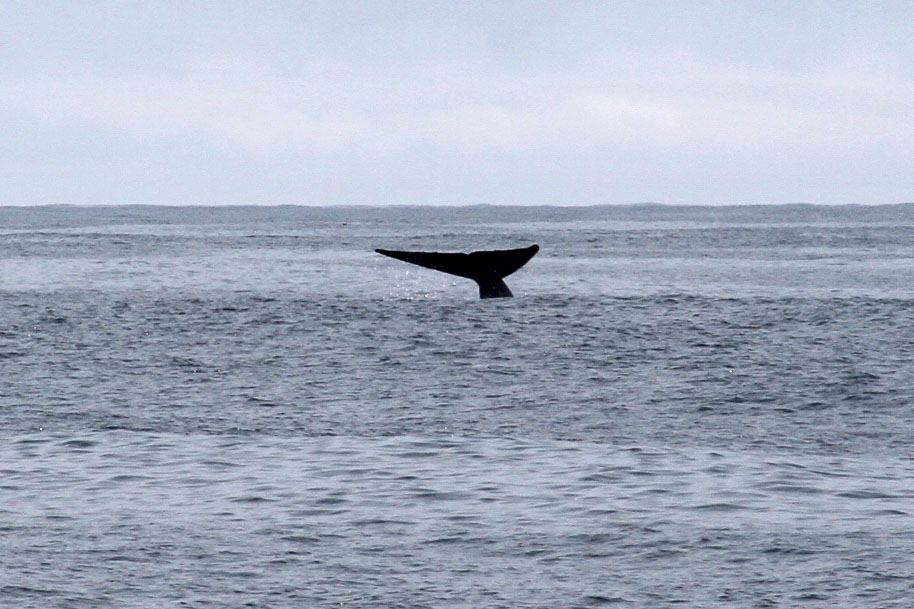 The largest known animal to have ever existed on the planet

As we're heading back, Debi asked me how my Mountain Quail trip with Bob Barnes worked out. I told her it was a lot of fun, Bob was fantastic, and we saw some great birds - the only thing that would, perhaps, have made it even better was *actually* seeing or hearing a Mountain Quail. And then Debi starts doing what everyone else does when I tell them about my nemesis - they describe their own secret spot for the birds. It seems that everyone has a Mountain Quail spot. Everyone, that is, except me. 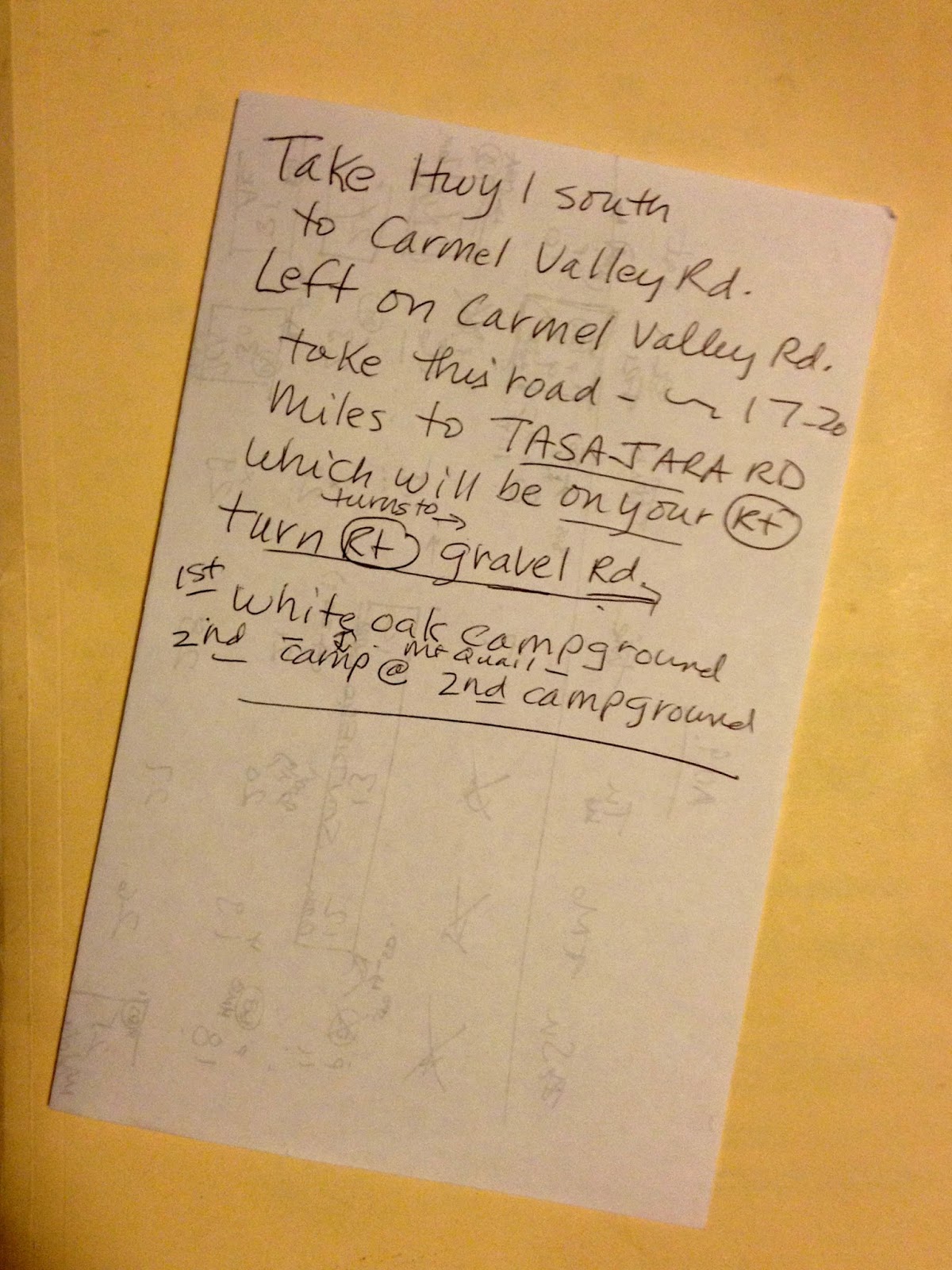 I have the next day free - which I was going to spend hunting for quail back at the Piute Mountains. But Debi's place is 1.5 hours away, compared to 5 hours. Oh well - I'll probably miss them at either place, so might as well try the closer!

I leave Fisherman's Wharf in Monterey by late afternoon. My plan is to scope out Debi's site - Tassajara Road - before dark and then come back in the morning when the quail might be more active.

The road is unpaved, and steep in places as it winds up into the mountains of central Monterey County. I pass a busy campsite on the way, open meadows and heavily wooded hillsides. I'm about 10 miles up when I stop enjoying the view, and remember why I'm here - Mountain Quail. Must focus! I start imagining what it would be like to actually see one - turning a bend, and suddenly discovering one crossing the dirt road. And as I'm having this exact thought, imagination and reality suddenly fuse: as I turn the corner, there is a quail standing on the side of the road. I slam on the brakes just as it starts running to the other side of the road and disappearing up into a thickly-wooded slope. Wow - a quail! Could it be Mountain Quail? As I'm thinking this, another pops out, standing long enough for me to get my binoculars on it and see the diagnostic white vertical stripes on the burgundy flanks. Mountain Quail! And then it quickly follows the first. Where's my camera? Up pops another quail. Damn - where *is* my camera? And away up the slope. And another! My camera? There it is. And another appears! Remove lens cap....

Eight (!) Mountain Quail cross the road as I'm fumbling between binoculars, camera and the thought that I'm actually seeing Mountain Quail. I never do manage to get a photo, and searching around up the slope is hopeless - the vegetation is too thick to see them and too steep for me to clamber up. But they do leave behind one clue that I didn't just imagine the whole thing... 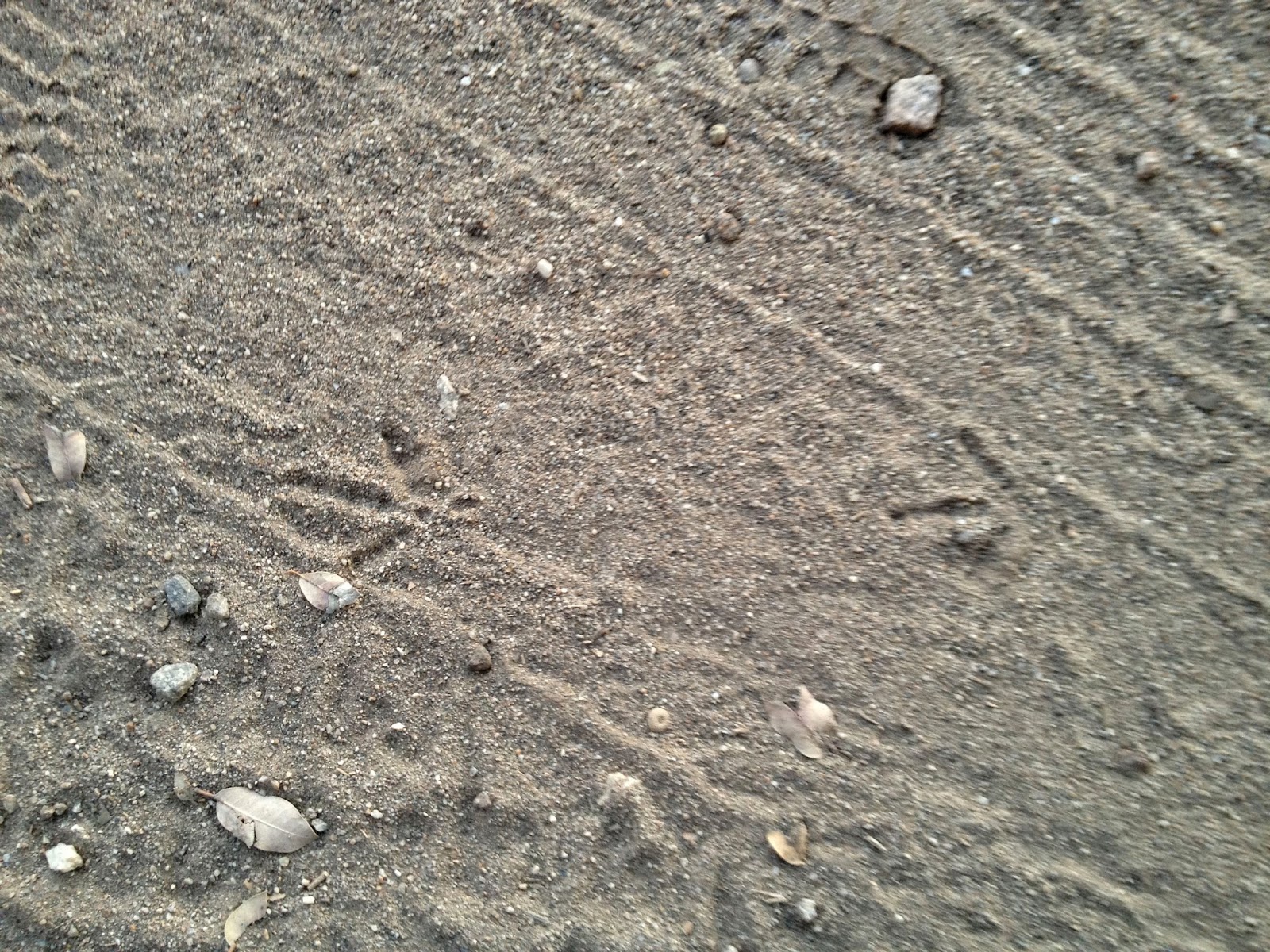 And this is where it all happened... 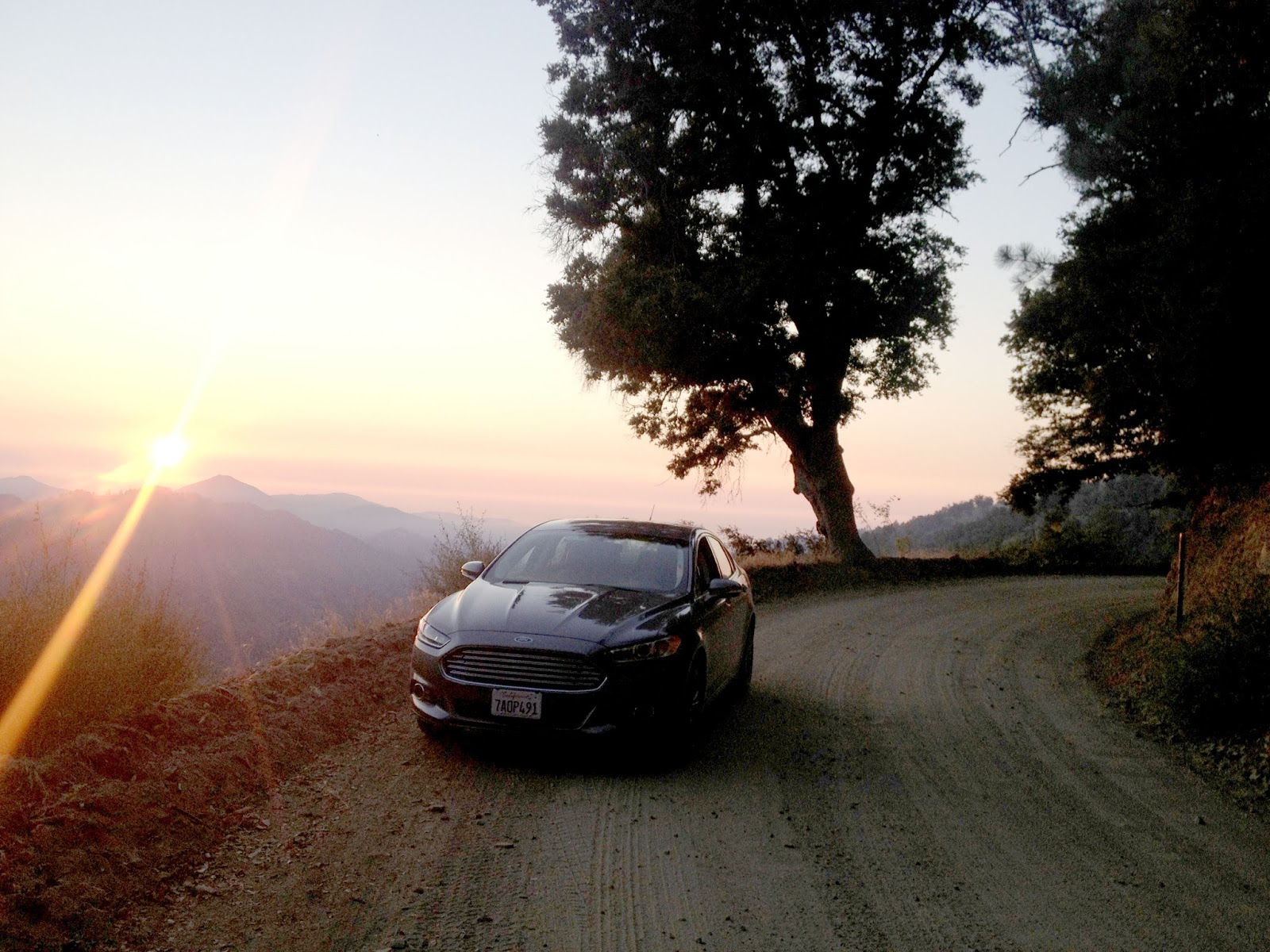 No - not an ad for the Ford Fusion (although it was a very comfortable car!)
- but the location of the Mountain Quail road crossing drama

Hoping for more after such a tantalizing view, I sleep on the mountain and try again in the morning. As I'm driving up the road I meet a Fish and Wildlife ranger who tells me today is going to be busy: it's opening day for deer season. He asks if that's why I'm here.

"No - I'm looking for Mountain Quail."

"Oh, I haven't seen one of those for years. Are you sure they're here?"

I hope so! I'm pretty sure I wasn't imagining yesterday's encounter. Well - I was imagining it, but also seeing it, kind of both at the same...wait, this wasn't the time for this type of conversation. I left the guy sitting in his truck while I drove further up the mountain.

The rest of the mountain was pretty quiet, and I turned round before the road started disintegrating. The ranger was still parked where I left him. This time though, he's waving frantically at me: "I just saw two of them!" What? "They crossed the road. Less than a minute ago!"

I drove near where he'd seen them disappear and waited. They never did come out, but I could hear their soft contact calls deep within the foliage.

And on the way back, I stopped at the place I'd seen them last night. And this time I heard it, the loud call of the male Mountain Quail, "quee-ark!"

Thank you, Debi! My nemesis is finally over. Wasn't there some idiotic hipster dufus who recently suggested that Mountain Quail were extinct?! I'd seen them, and heard contact calls and the male song. Definitely not extinct. I didn't, however, find the Sasquatch - but then, I didn't go all the way to the end of the road.

Mountain Quail is #699 for the year - although, if the Rufous-necked Wood-rail is accepted, it would be #700. After the many, many hours of Mountain Quail chasing this year, I couldn't think of a more fitting bird for such a milestone.