BARROW - BIRDING ON TOP OF THE WORLD

"We'd like to welcome you to Barrow, where the local time is 10am and the temperature is 22 degrees. We'd also like to congratulate the local boat crew: they landed a whale yesterday!" 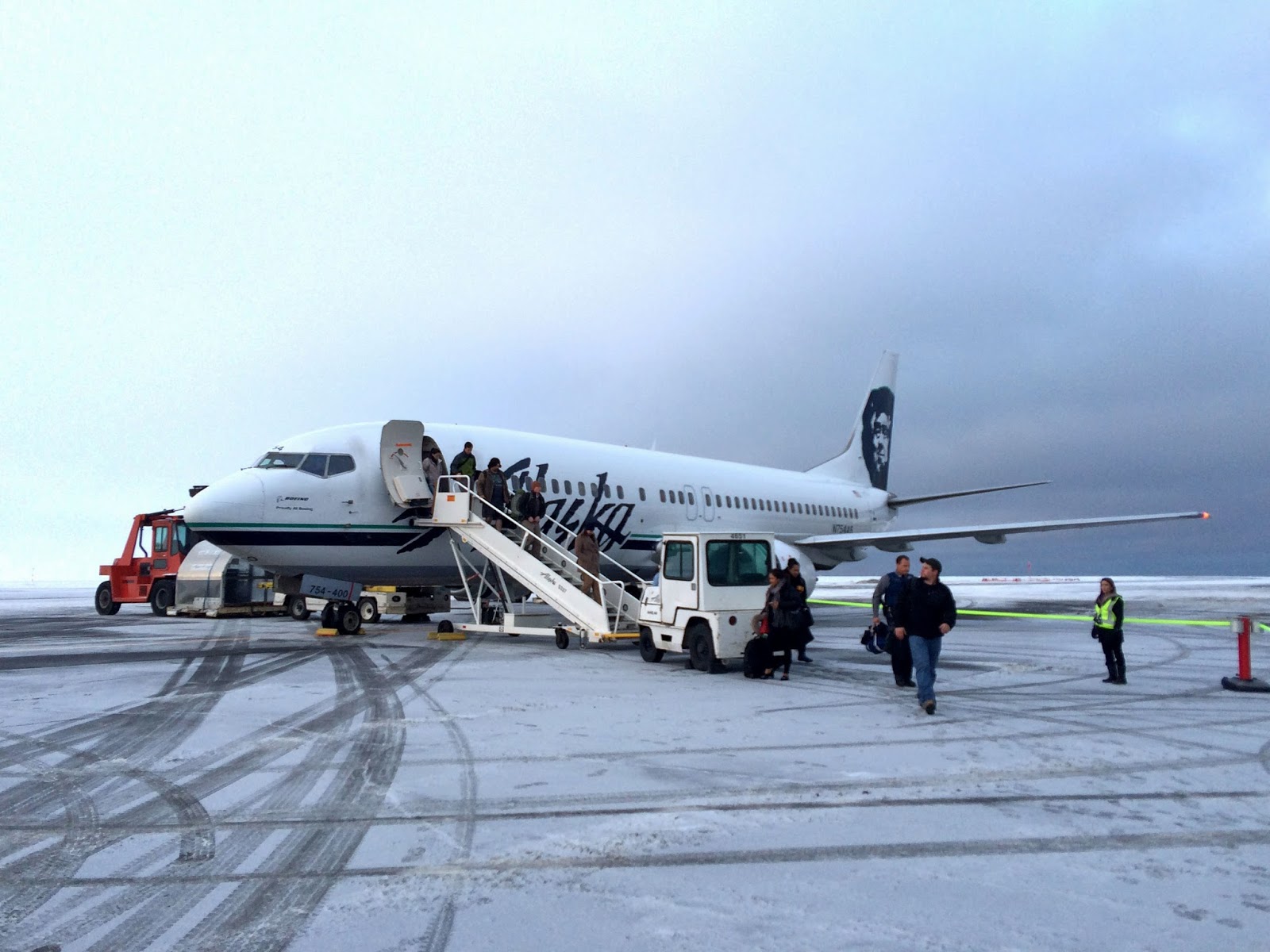 I've swapped the Bering Sea of western Alaska for the Arctic Ocean of the north. I'm here for Ross's Gull - a bird that's famously difficult to track down, spending its entire life above the Arctic Circle. Thankfully, Ross's Gulls migrate along the north Alaskan coast during October, and Barrow - which juts out into the Arctic Ocean separating the Chukchi Sea to the west from the Beaufort Sea to the east - is one of the best places to see them. At this time of year these delicate, pink-flushed birds pass by in the hundreds or even thousands. (I'm hoping for at least one!) I'm also looking for Ivory Gull, a bird I've previously seen in Massachusetts - an all-white bird that feeds on carrion - especially whale carcasses. So hopefully the local dead whale news is good news for Ivory Gulls too. 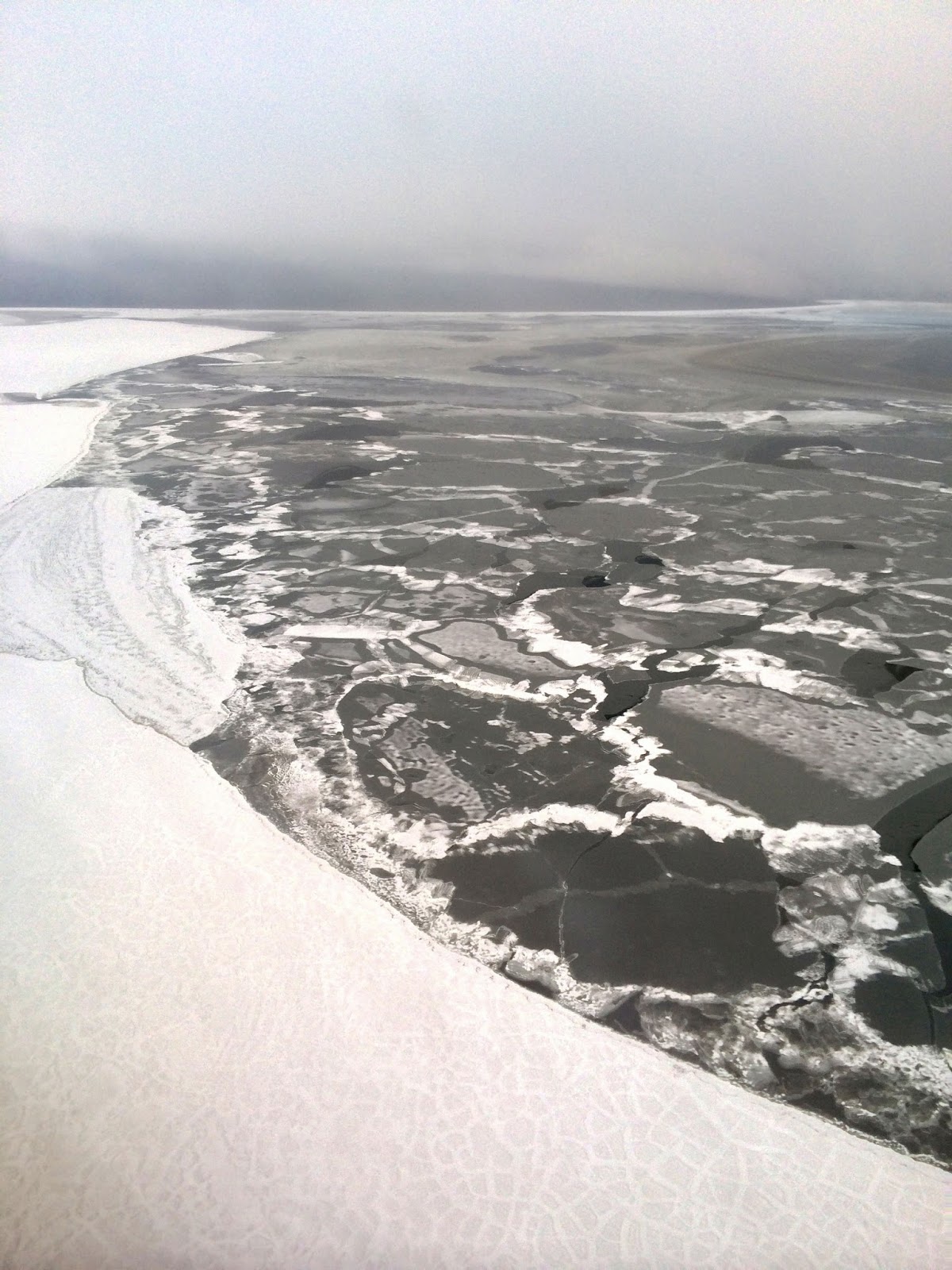 Flying into Barrow over the frozen Elson Lagoon to the east.
The thin strip of land at the top runs out to Point Barrow at the top right.

Barrow is the most northerly city in the US, 300 miles north of the Arctic Circle and 1,300 miles south of the North Pole. It's mostly tundra over permafrost (up to 1,300 ft thick.) Being surrounded by ocean on 3 sides and being pretty flat, it's gets very windy which makes the cold (160 days a year below 0F!) feel even colder. It's technically a desert climate with only 29 inches of snow of year, most of which falls in October. Wait - that's now! 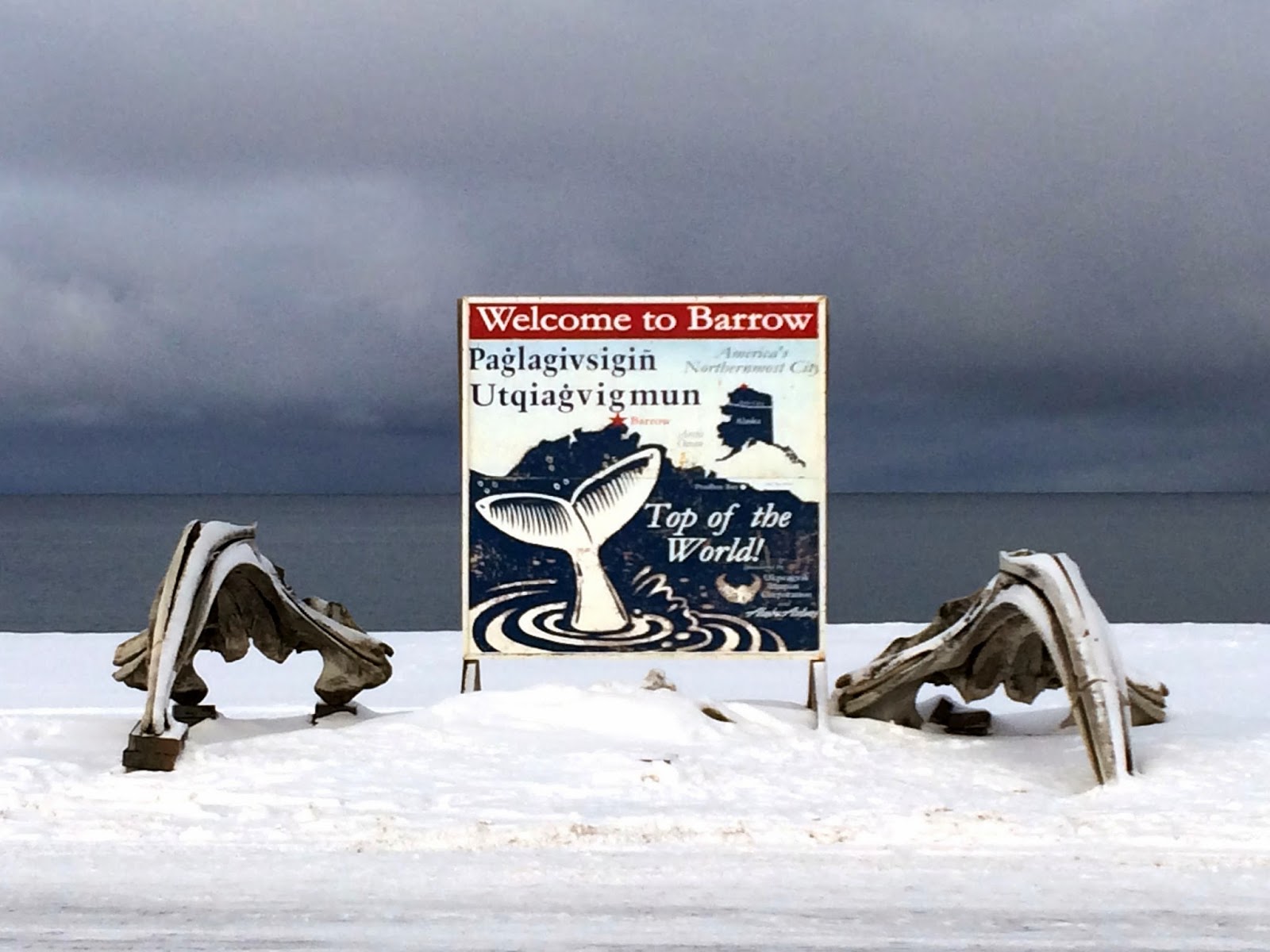 I'm here birding with John Puschock, who's leading an ABA tour of Barrow later this week with help from nature photographer Jess Findlay. Fellow big year birder Jay Lehman's joined me, so there are four of us. 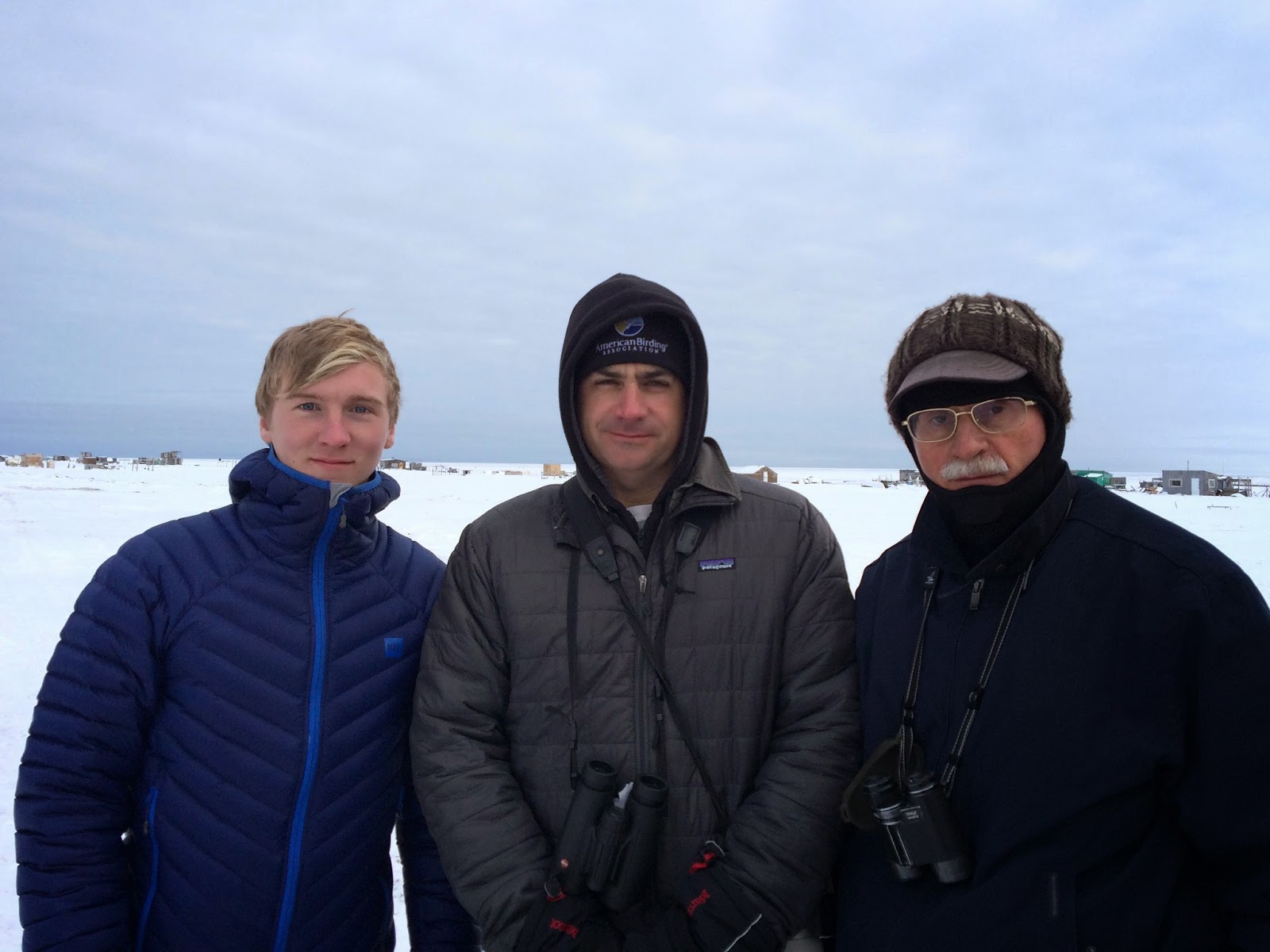 As we drive through town we find the site of the recent whale catch. 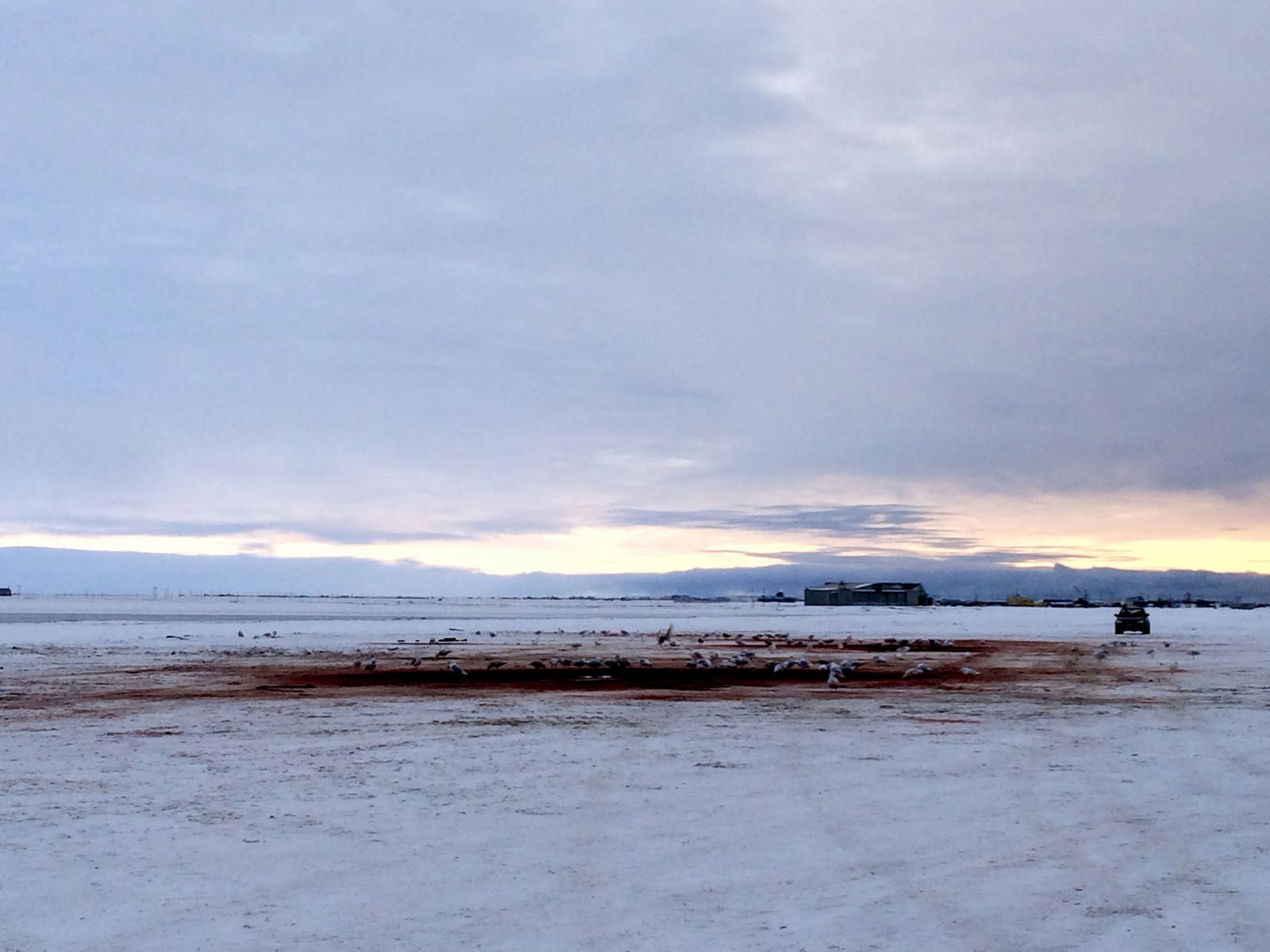 The blood and blubber remains have attracted a large crowd of hungry, screaming Glaucous Gulls 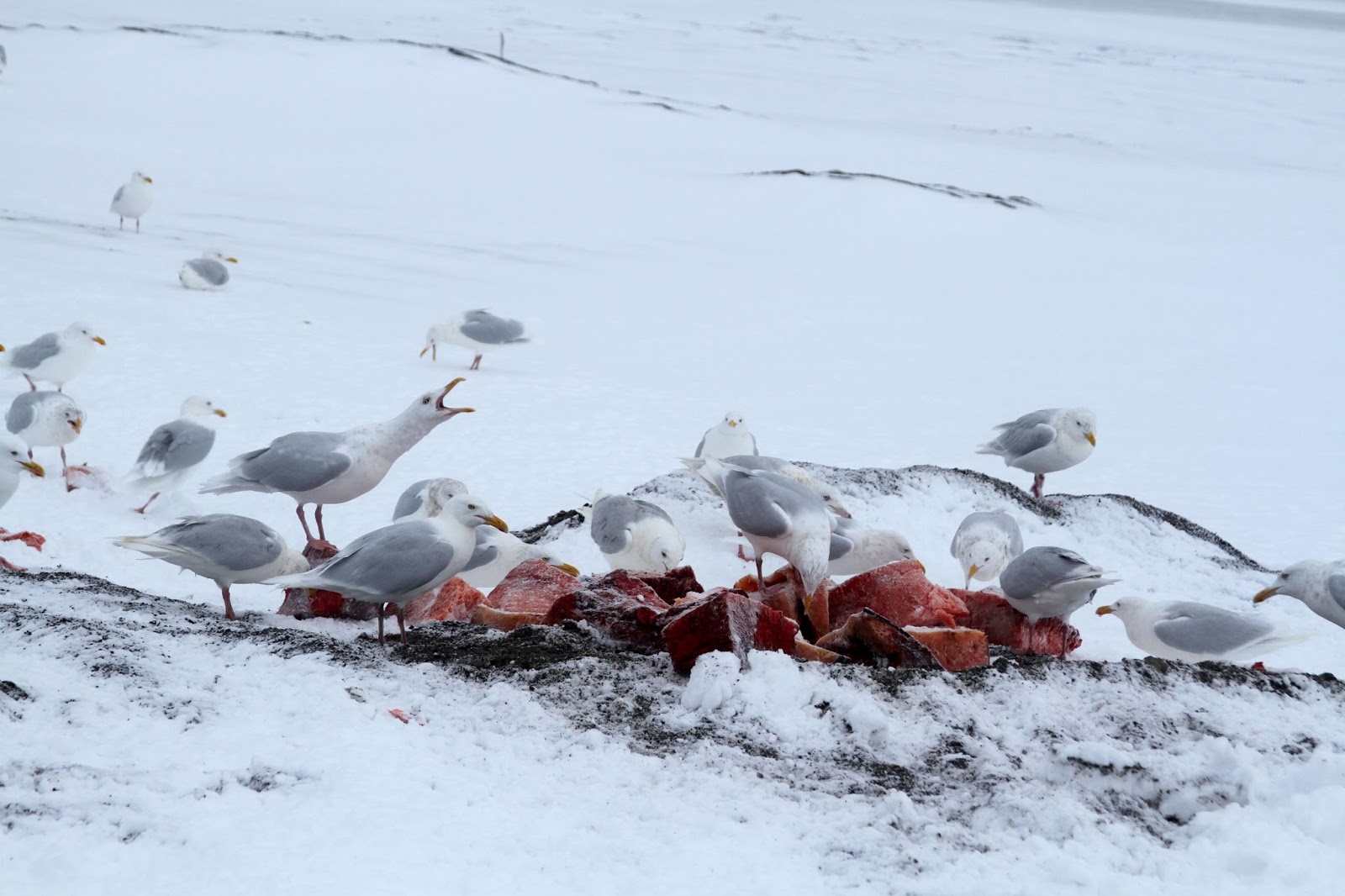 Whale remains not only attract gulls but also polar bears. And unlike other bears, polar bears see humans as a legitimate food supply and will actively hunt them (apparently human goes down well with a nice cold bottle of Coca Cola.) So, after the whale meat and skin has been divided up among the boat crew the carcass is taken to the end of Point Barrow, far enough away from town. 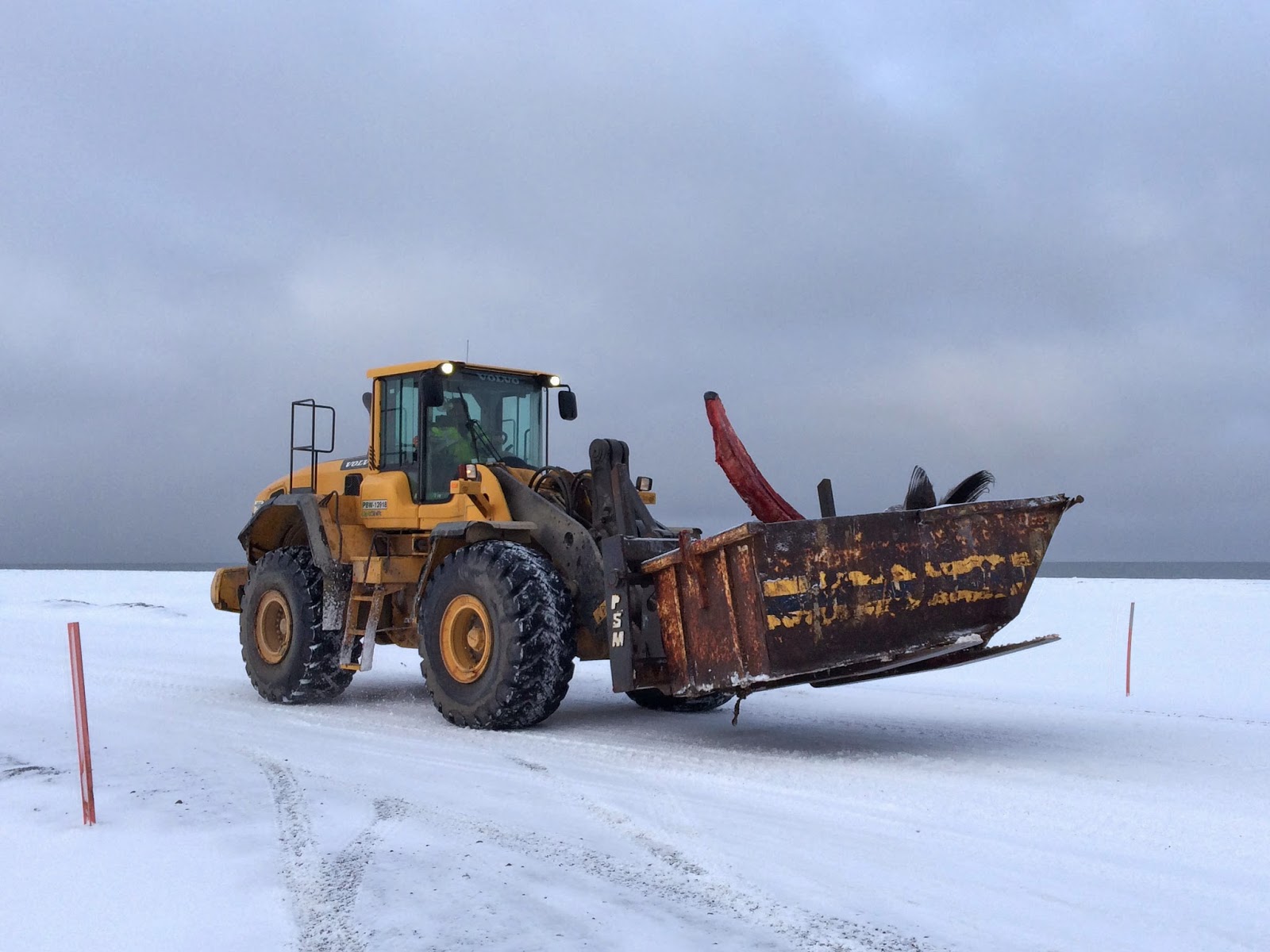 Follow that carcass! Luring the polar bears away from town.
This is the last of the whale: jaw bones and baleen. 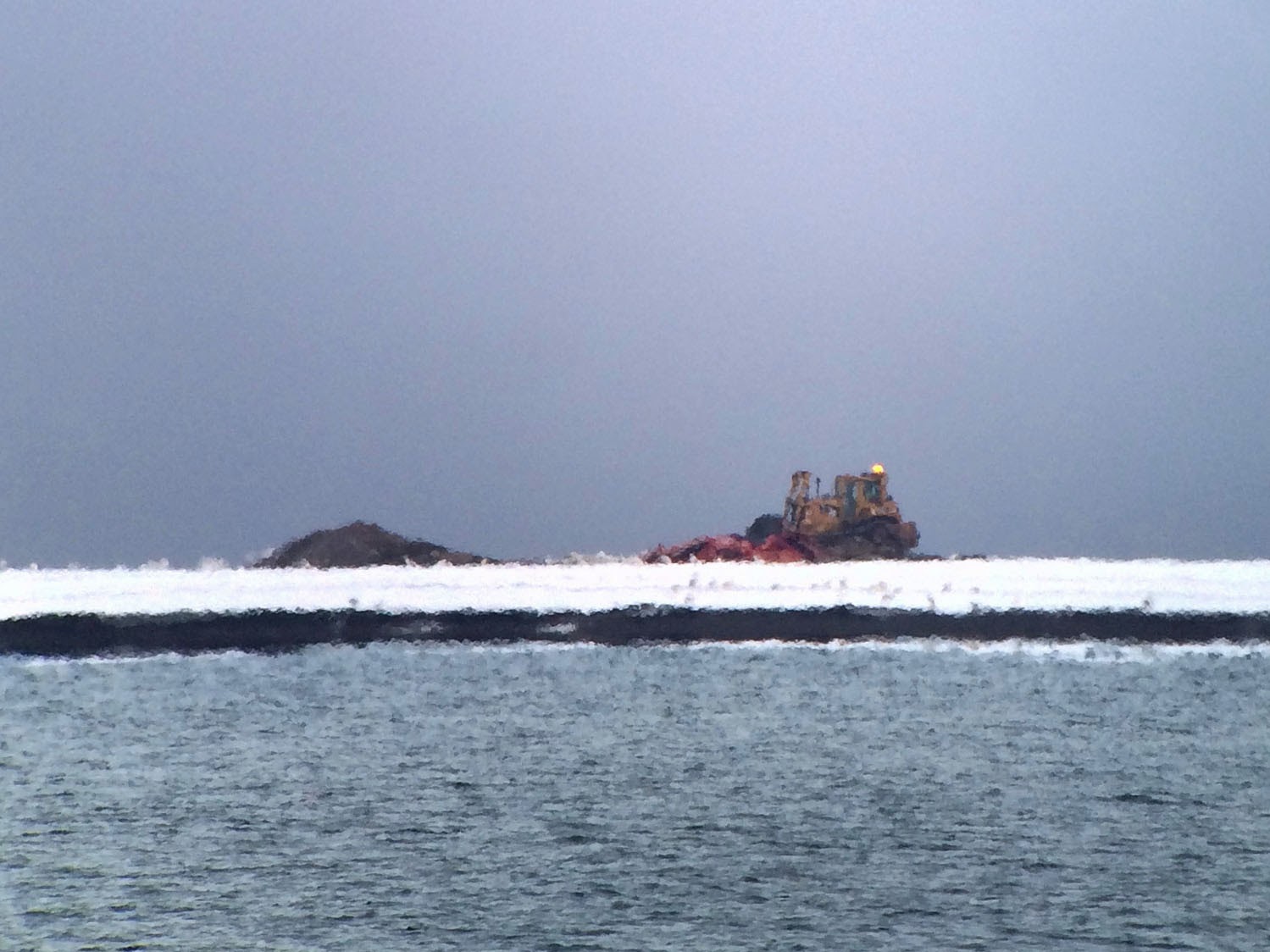 The protocol for finding Ross's Gulls is simple - stand outside near the beach, and wait for pink gulls to fly by. 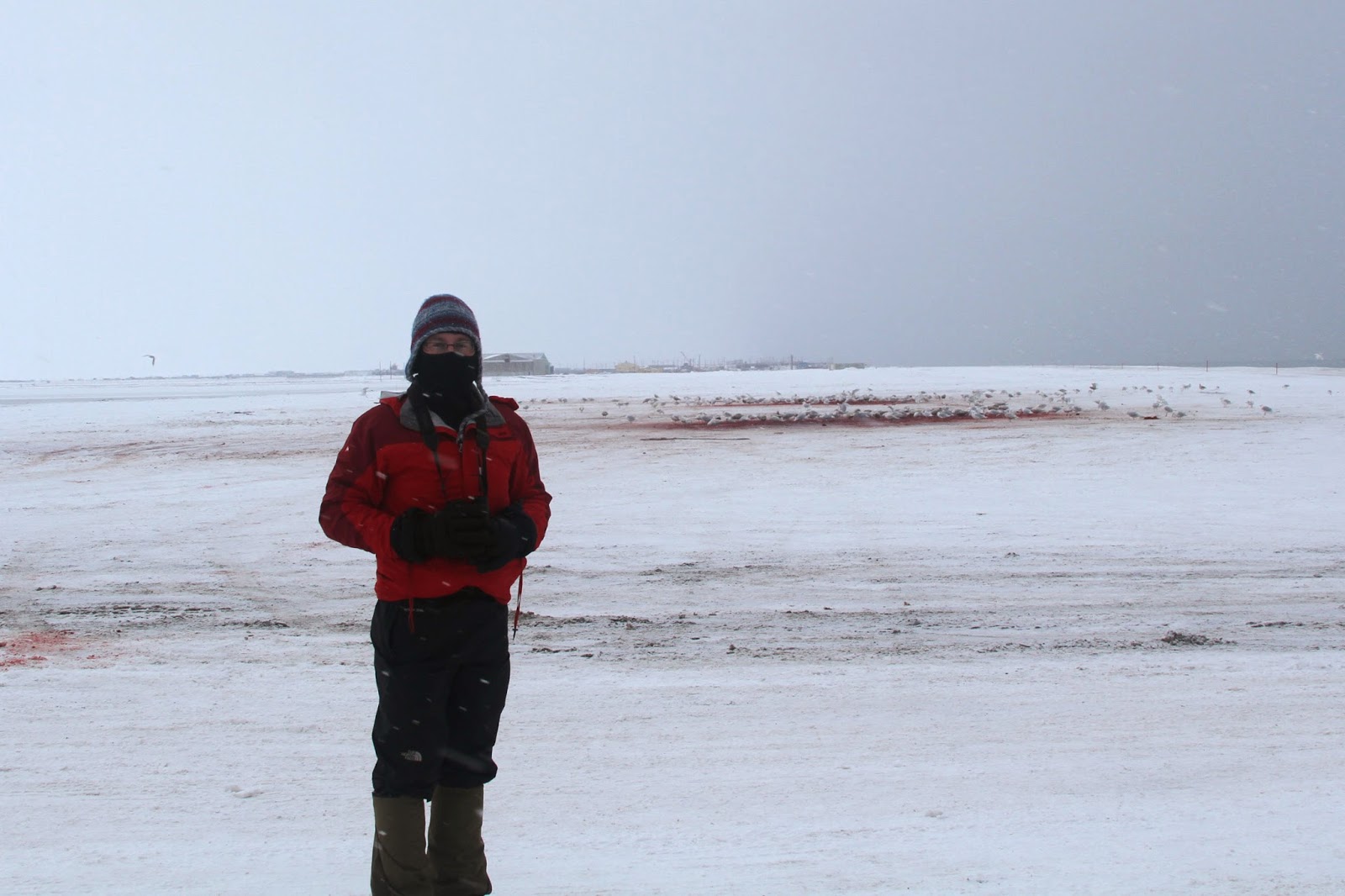 OK. Just take the damn picture!
Seeing Ross's Gulls involves a lot of waiting. And shivering. And then some more waiting.

It's the coldest I've ever felt. Ever. And it's not just me that's cold... 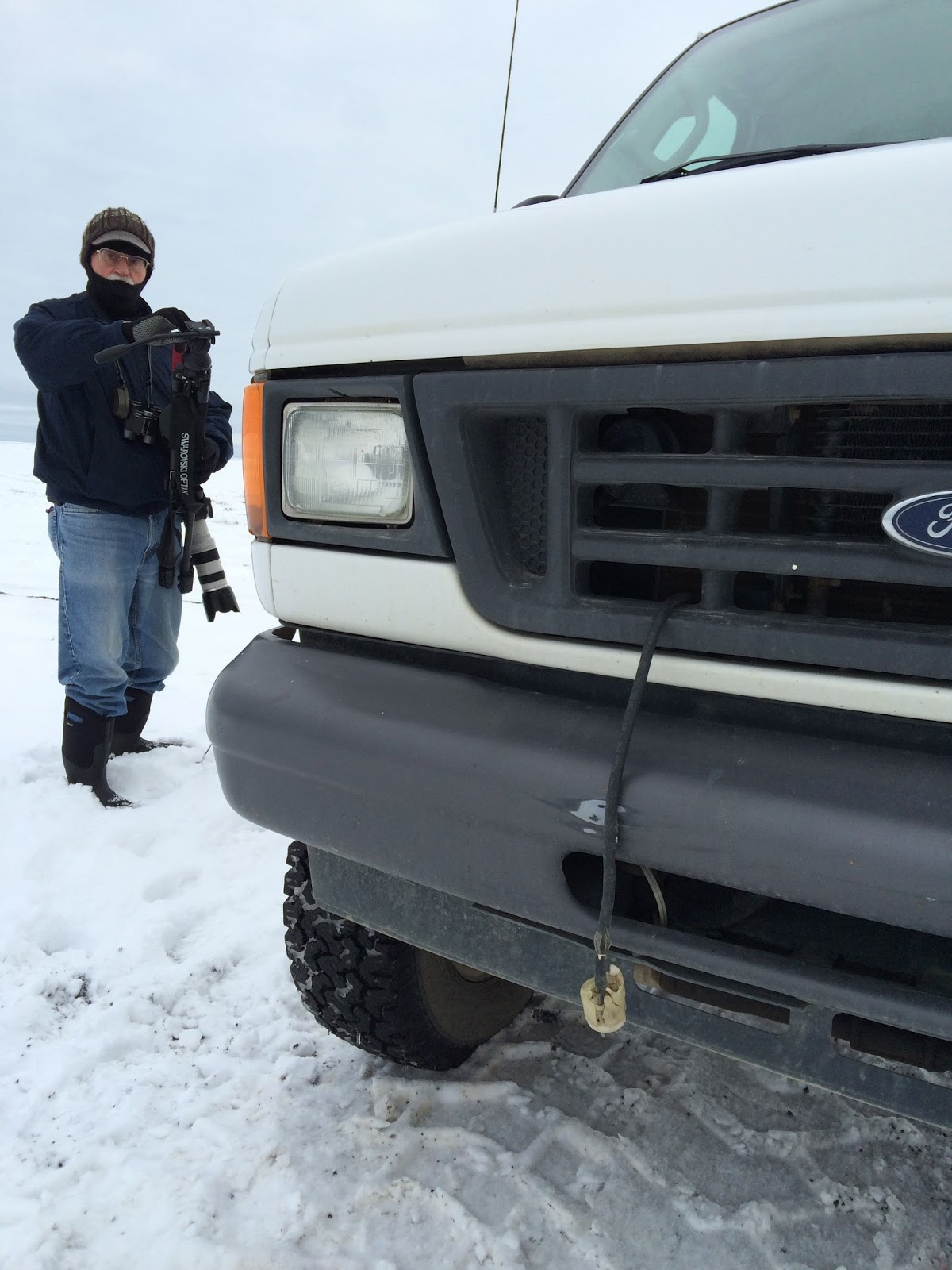 Even the vehicles have to be warmed up at night to prevent them freezing.
(I think Jay wishes he had a plug like this too warm him up too.)

As I'm scanning the ice sheets looking for Ivory Gulls, I suddenly stop. There's a massive white animal thing moving on the ice... 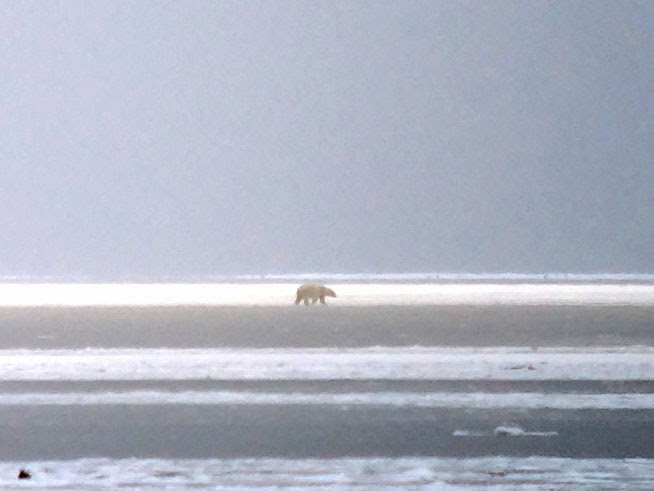 I watch in disbelief as this giant beast lumbers across the ice. The long neck gives it an odd articulation, making it seem at times unbalanced. After walking several minutes away from us, it suddenly stops, splays it giant legs, and dives head first into the frigid waters of the lagoon. We watch as a polar bear head slowly drifts away. It's not a bird, and not the main reason I came here - but finding and watching a polar bear is definitely one of the highlights of a (now long) year that has taken me from the southernmost point of the US to here - the most northerly. After seeing countless images on TV, it feels surreal to be watching one in real time. I only wish my girlfriend Gerri could see this - I know how jealous she'll be that I've seen a polar bear!

It's not long after the elation of the bear sighting that we spot our target bird: a Ross's Gull flies by. 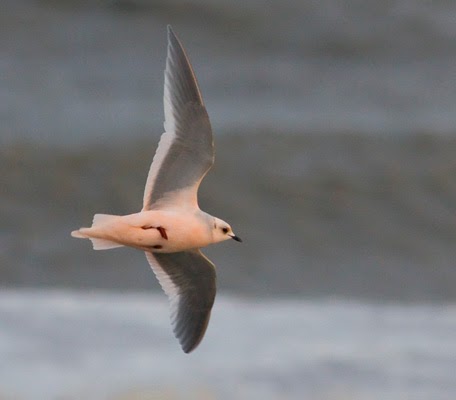 Ross's Gull - even in the winter, the birds are still flushed in pink. (Photo by John Puschock)

Over the course of 2 days we see about 20 birds - some singles and some in small groups. All of them are surprisingly pink, with obvious white trailing edges to the wing, and dark underwings. It's a really elegant bird, a life bird, and I'm very excited to finally see one!

Avian diversity is not high this far north at this time of year. My checklist after 2 days was a paltry 14 species. But the ones we did see were pretty cool... 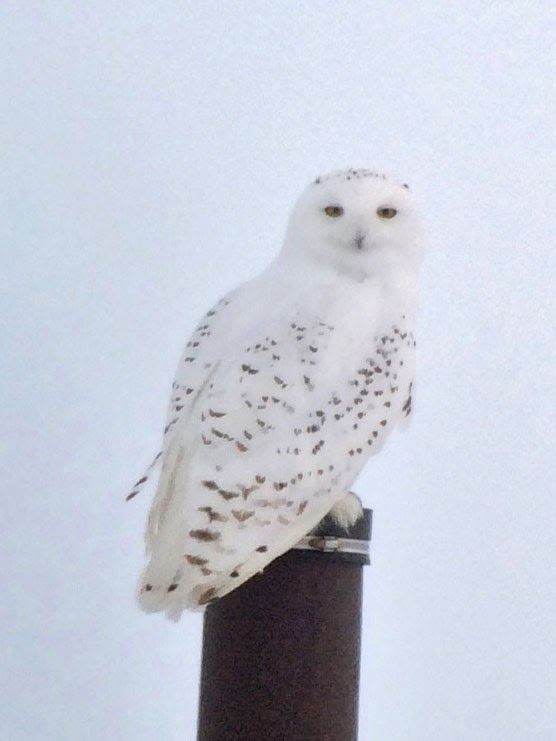 Snowy Owl. The local, Inupiat, name for the city of Barrow
is Ukpeagvik - "the place where we hunt Snowy Owls."
(Maybe someone should tell the Snowy Owls)

It's odd being somewhere where almost all the gulls - thousands of them - are Glaucous, and we're sorting through Glaucous Gulls to find an "interesting" one! But we do eventually find one - 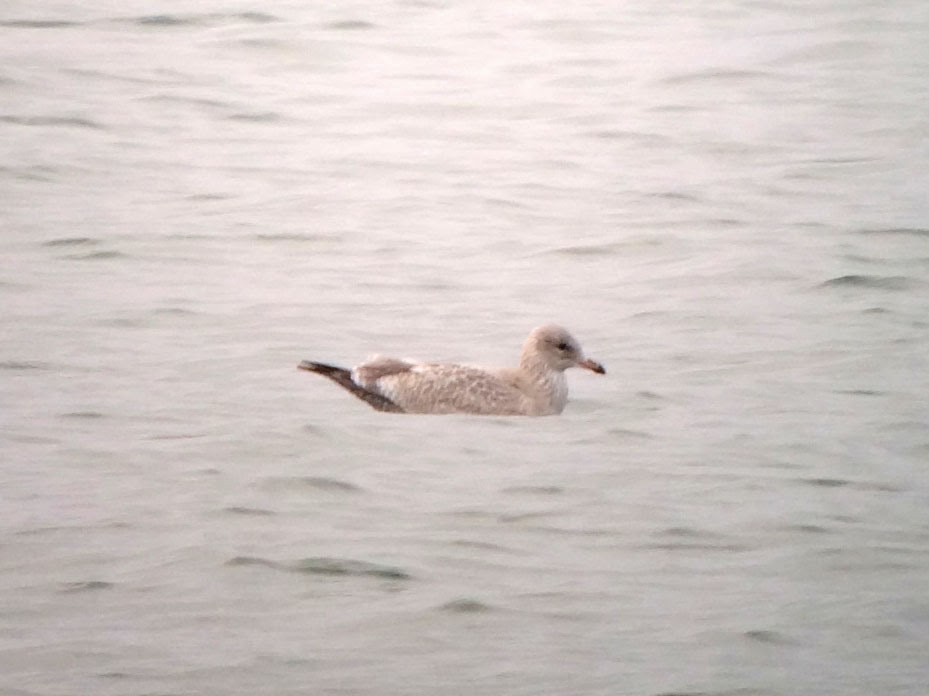 Ducks are in short supply - most of the local breeders have (wisely) headed south by now. There are some stragglers though, including King Eider on the beaches 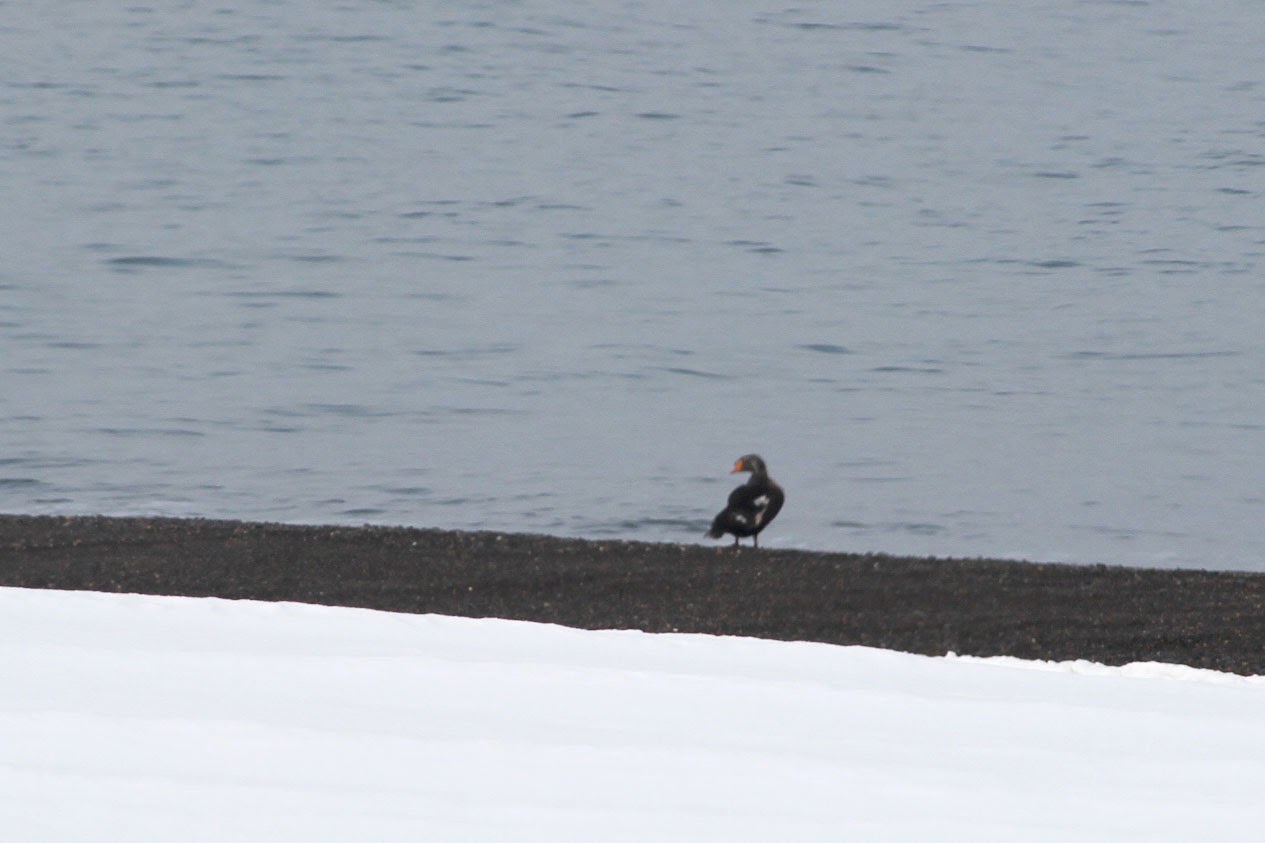 and Long-tailed Duck still in their black breeding plumage... 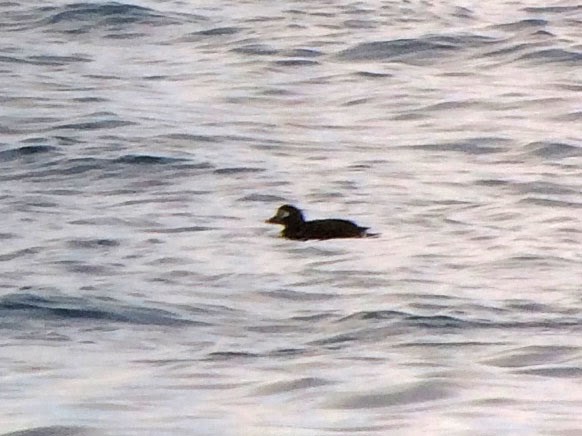 As well as Snowy Owl, there's another bird of prey here - the Rough-legged Hawk... 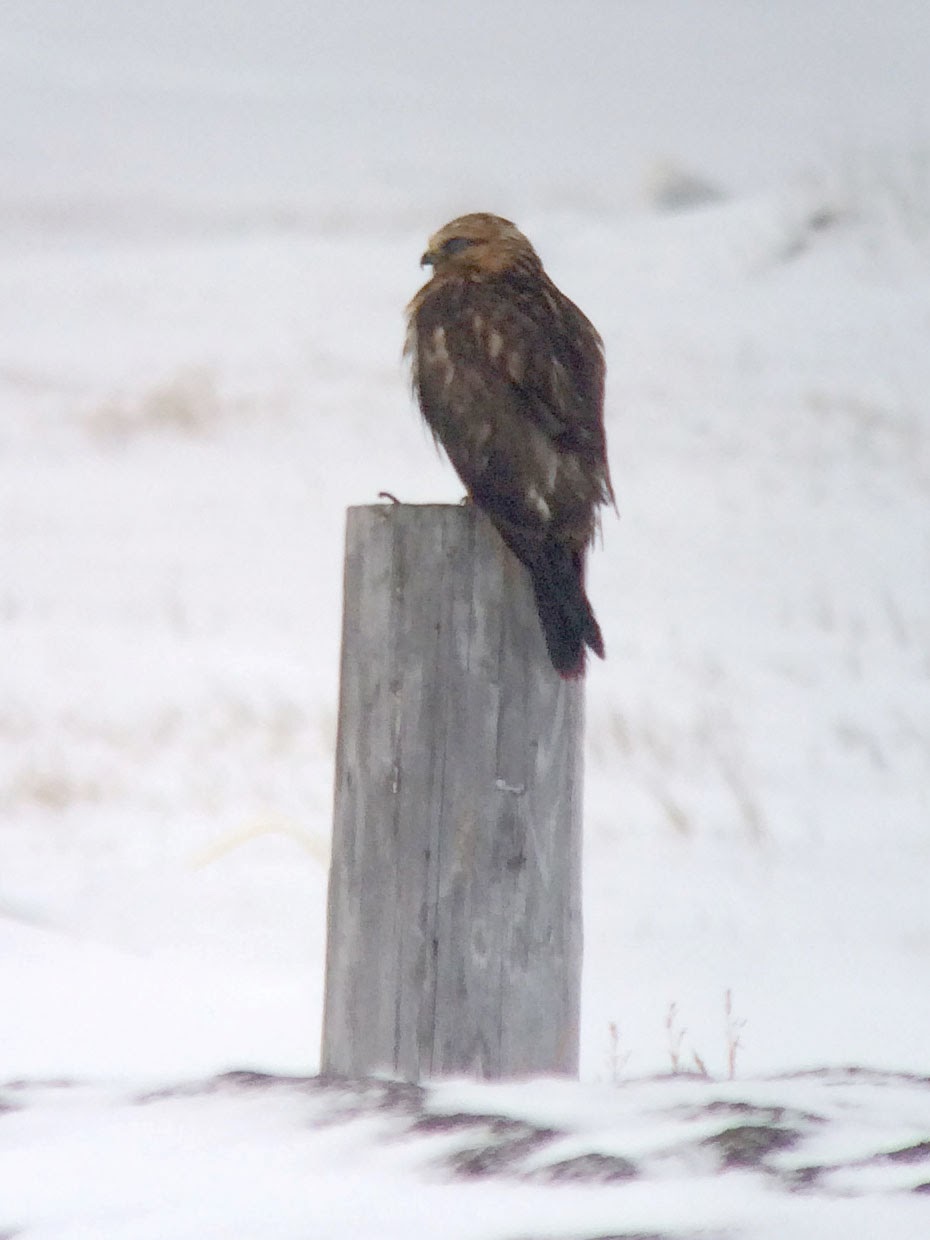 When we're not birding, there's plenty of local architecture to admire. Check out the local dentist... 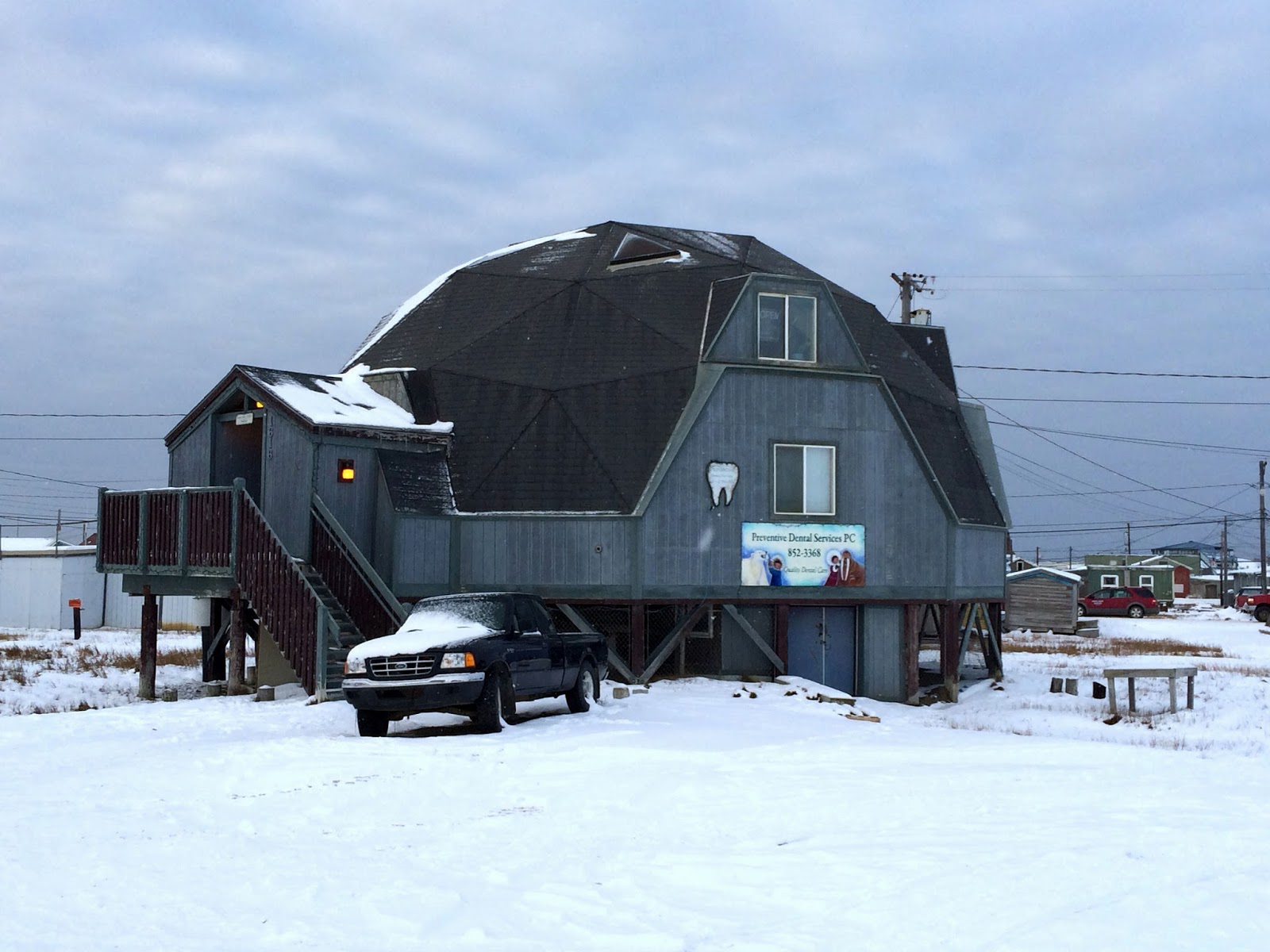 Geodesic Dome.
(Cute - but does it make the dental procedures any less painful?)

And a large number of prefabricated arched steel buildings - such as this one at the Naval Arctic Research Laboratory. 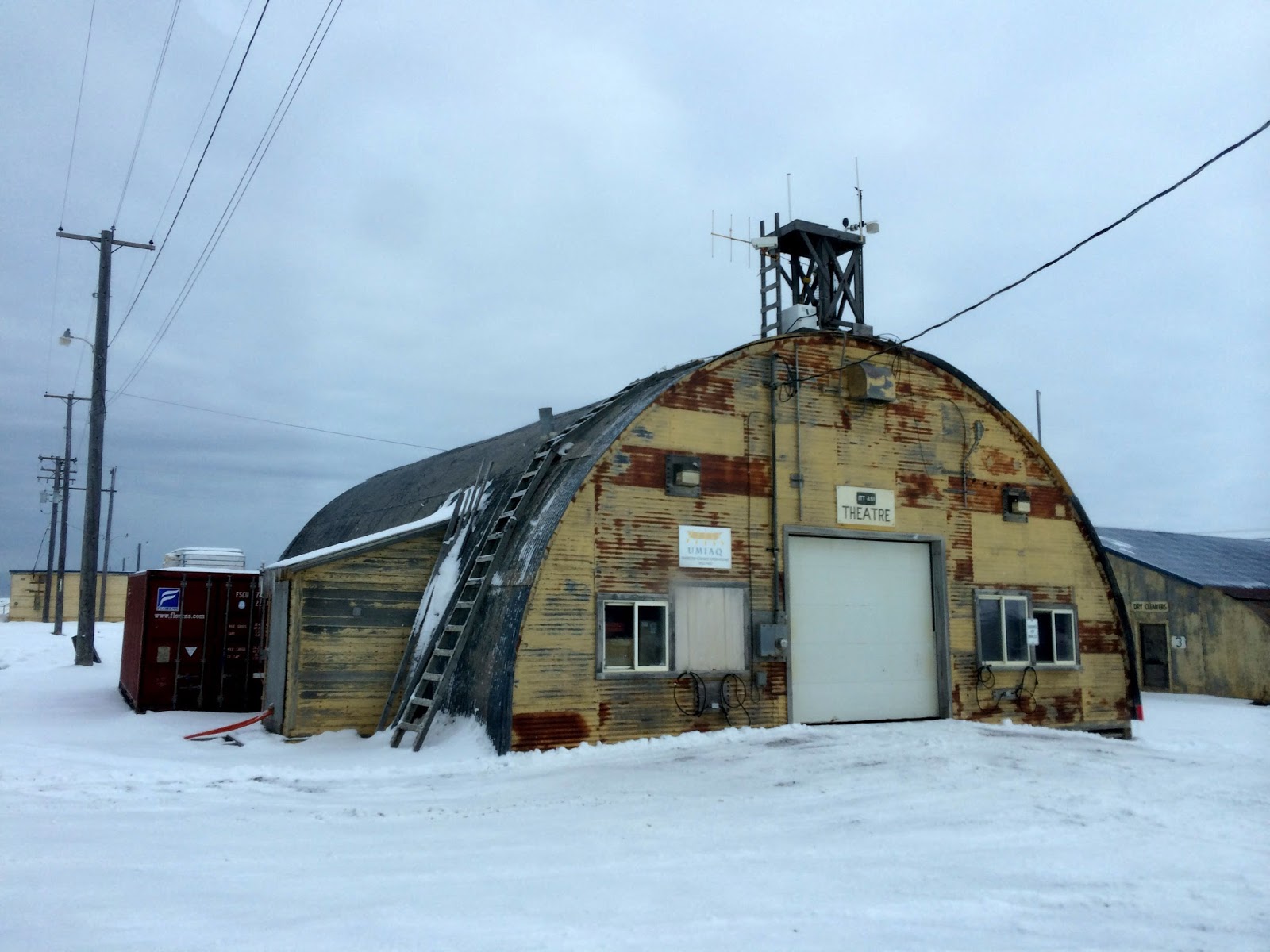 "Quonset Huts" - named after their first site of production in Rhode Island.
Popular with the Navy in the mid 20th century.

And despite some innovative landscaping, it's still ridiculously cold... 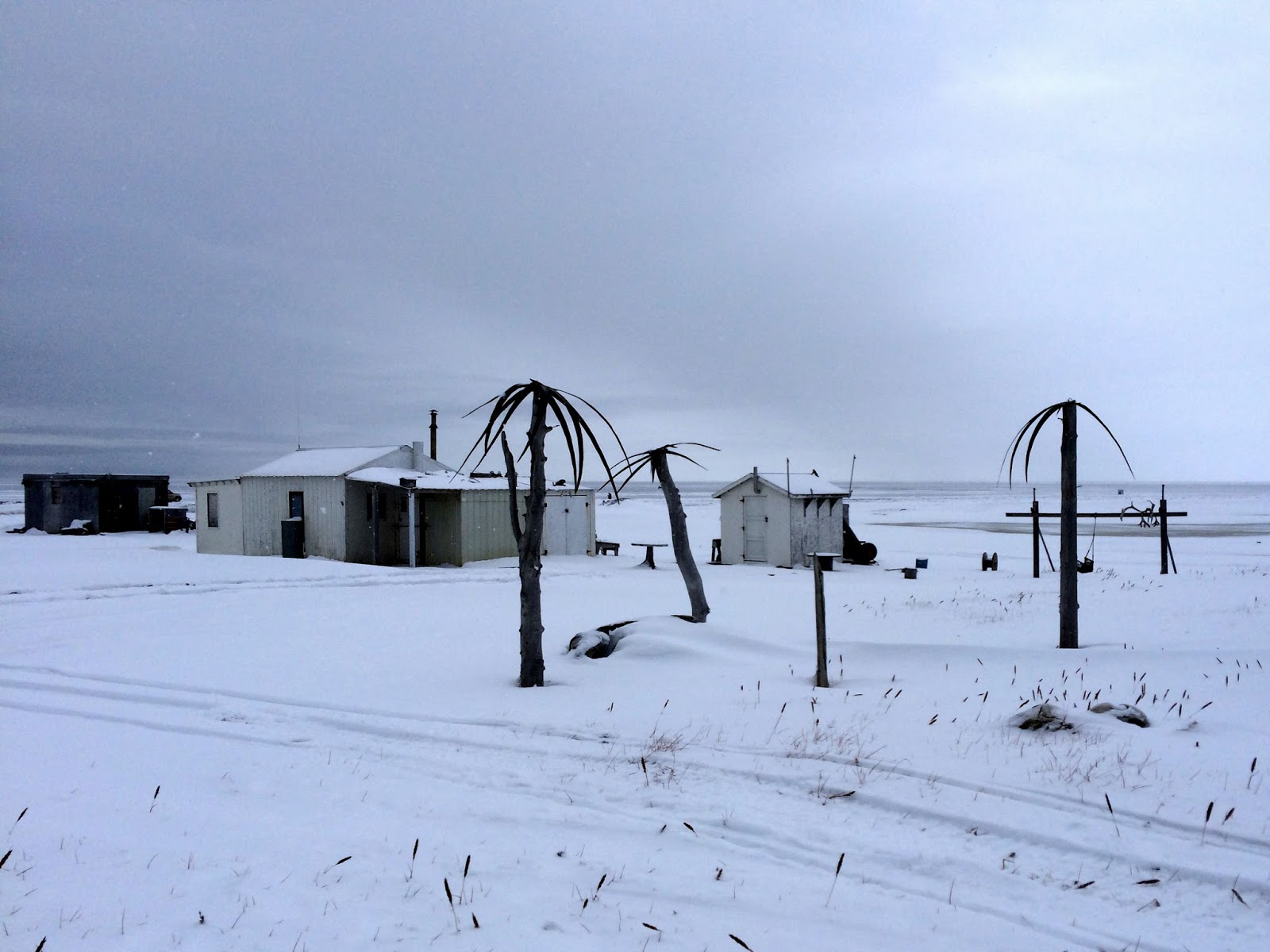 Palm trees does not a summer make.
Driftwood and whale baleen.

And a reminder that we're a long way from anywhere... 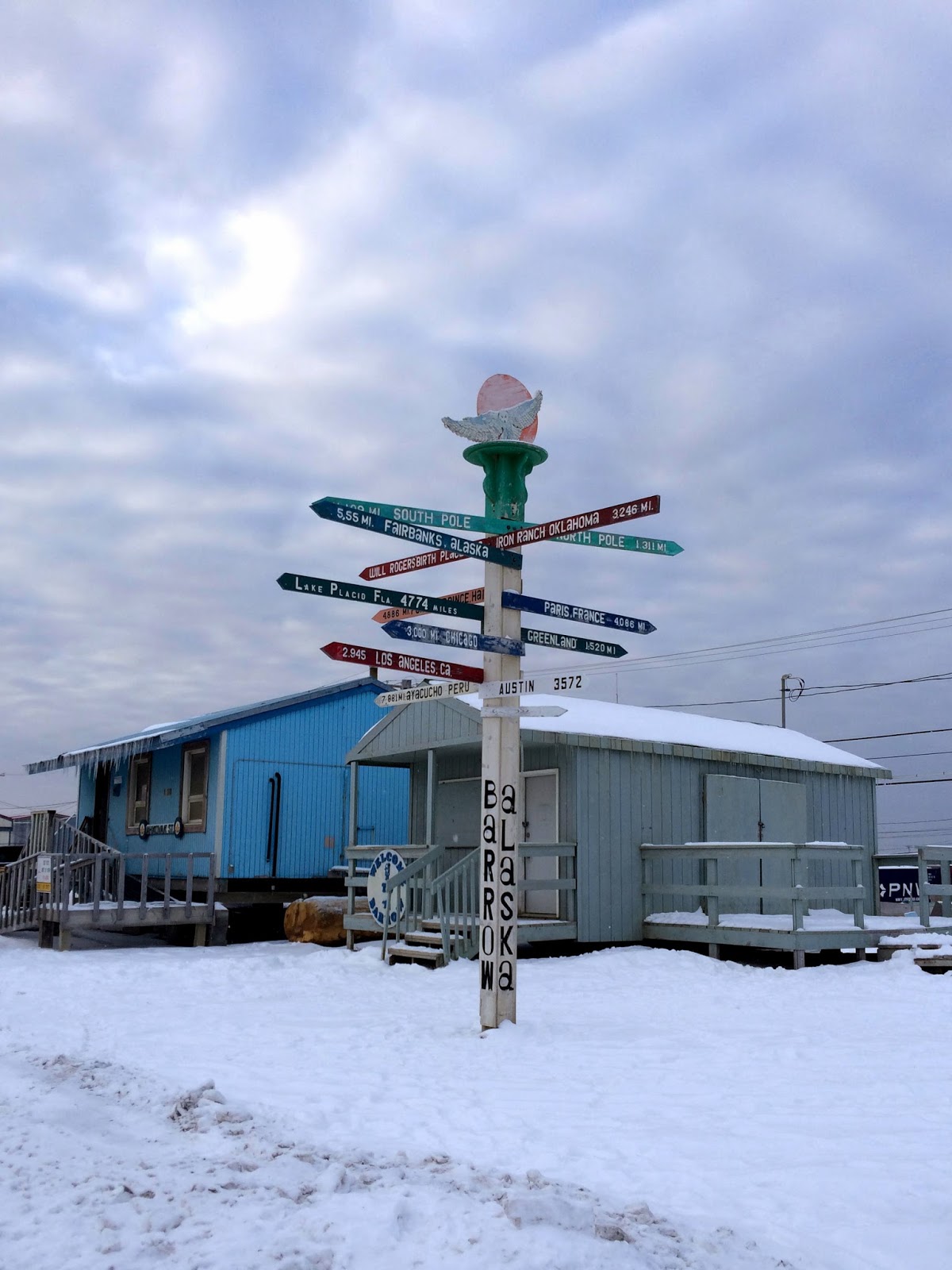 Barrow is a "bush community" - it's not connected the US road system.
You have to fly in. So really, you can't actually go anywhere from here.

While waiting for Ross's gulls to fly by or checking whale blood and blubber for Ivory Gulls, there's plenty of time to enjoy the sky. Although the sun still rises above the horizon (the arctic winter doesn't start until Nov 18 when the city won't see the sun for another 2 months) the light is oblique, the sky always overcast, making for an eerie twilight. 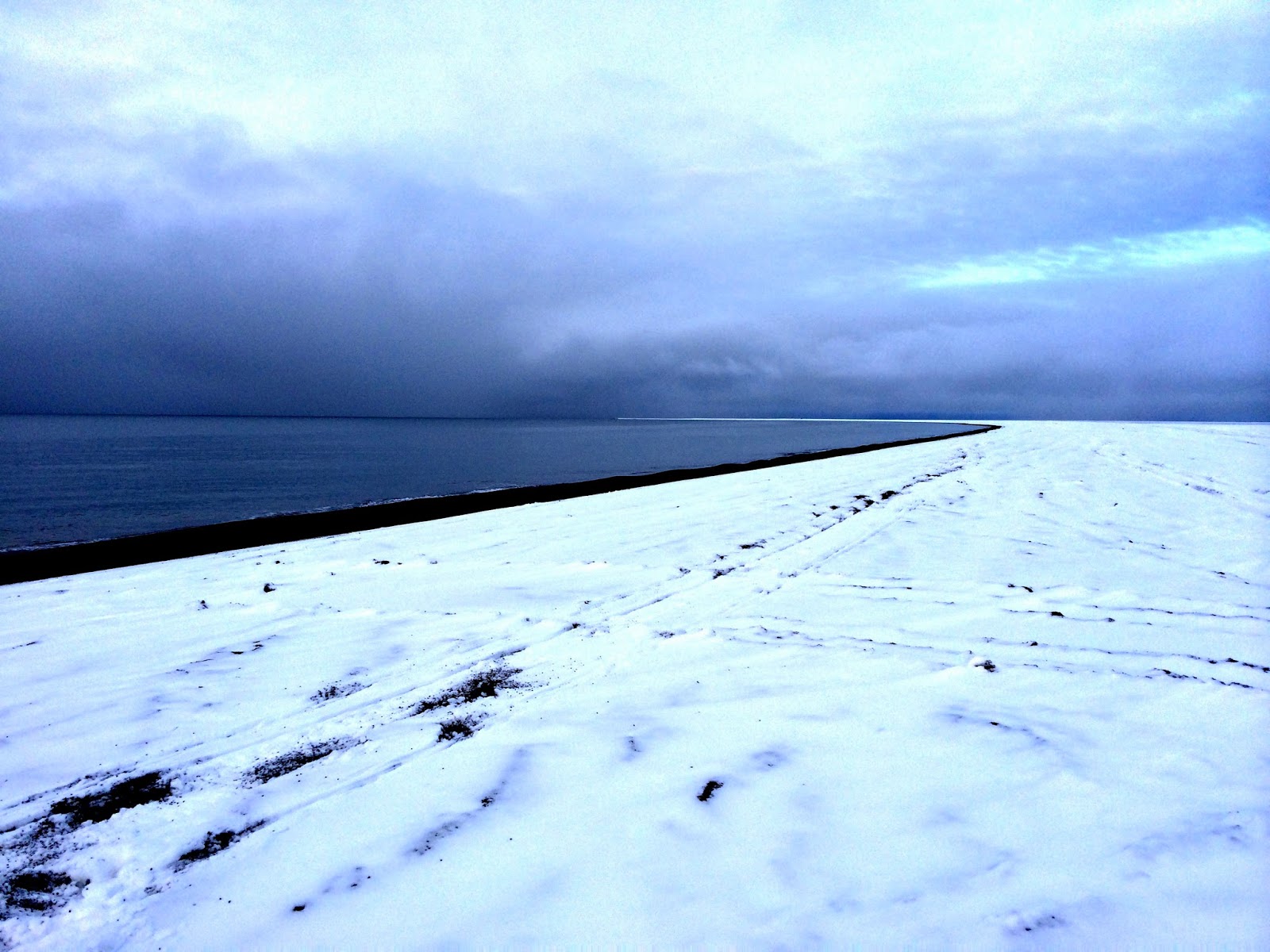 Looking east along the beach to Point Barrow 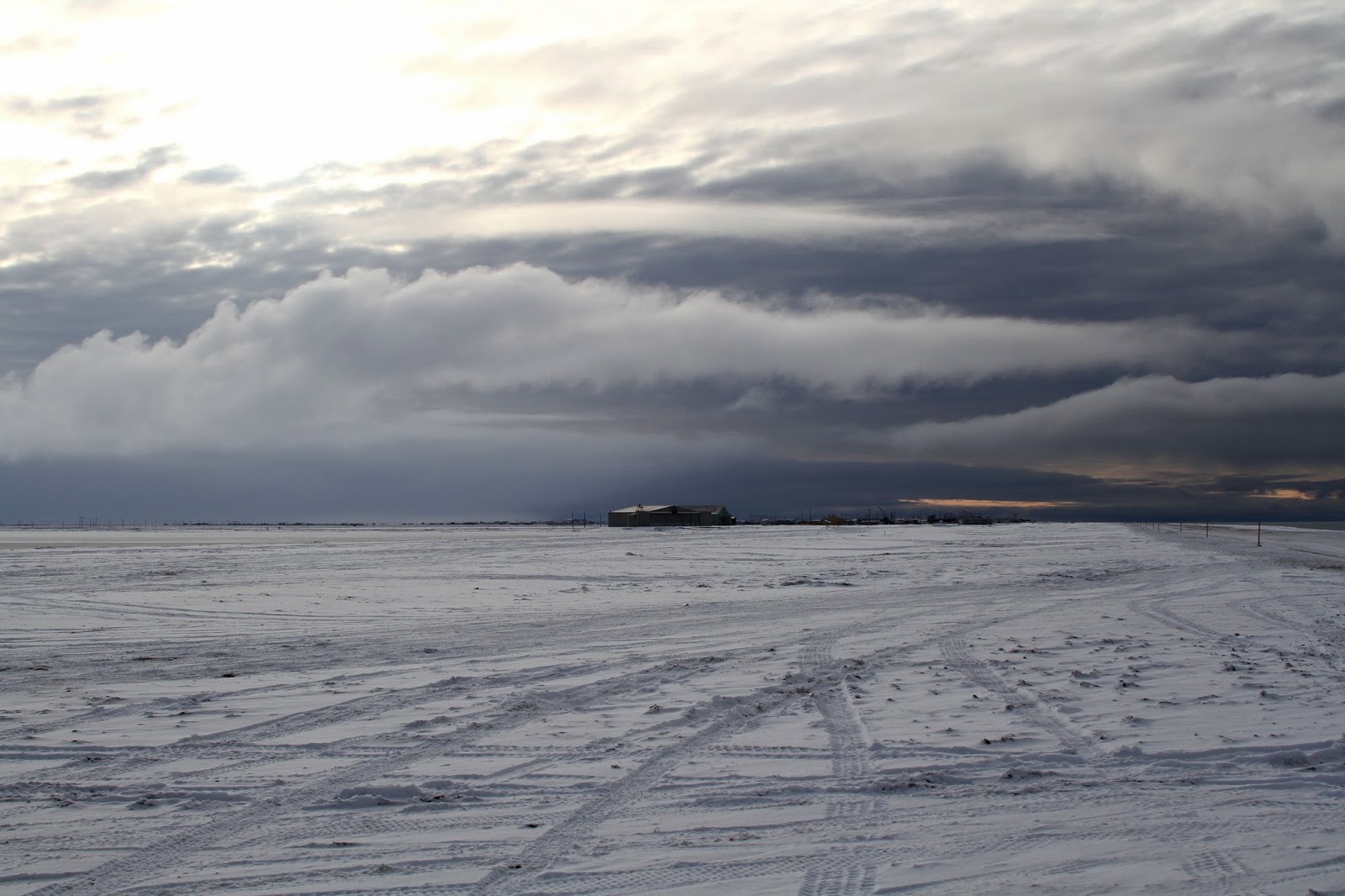 My polar bear sighting on day 1 is trumped on day 2 by John, who finds 3 polar bears - a mother with her two young. 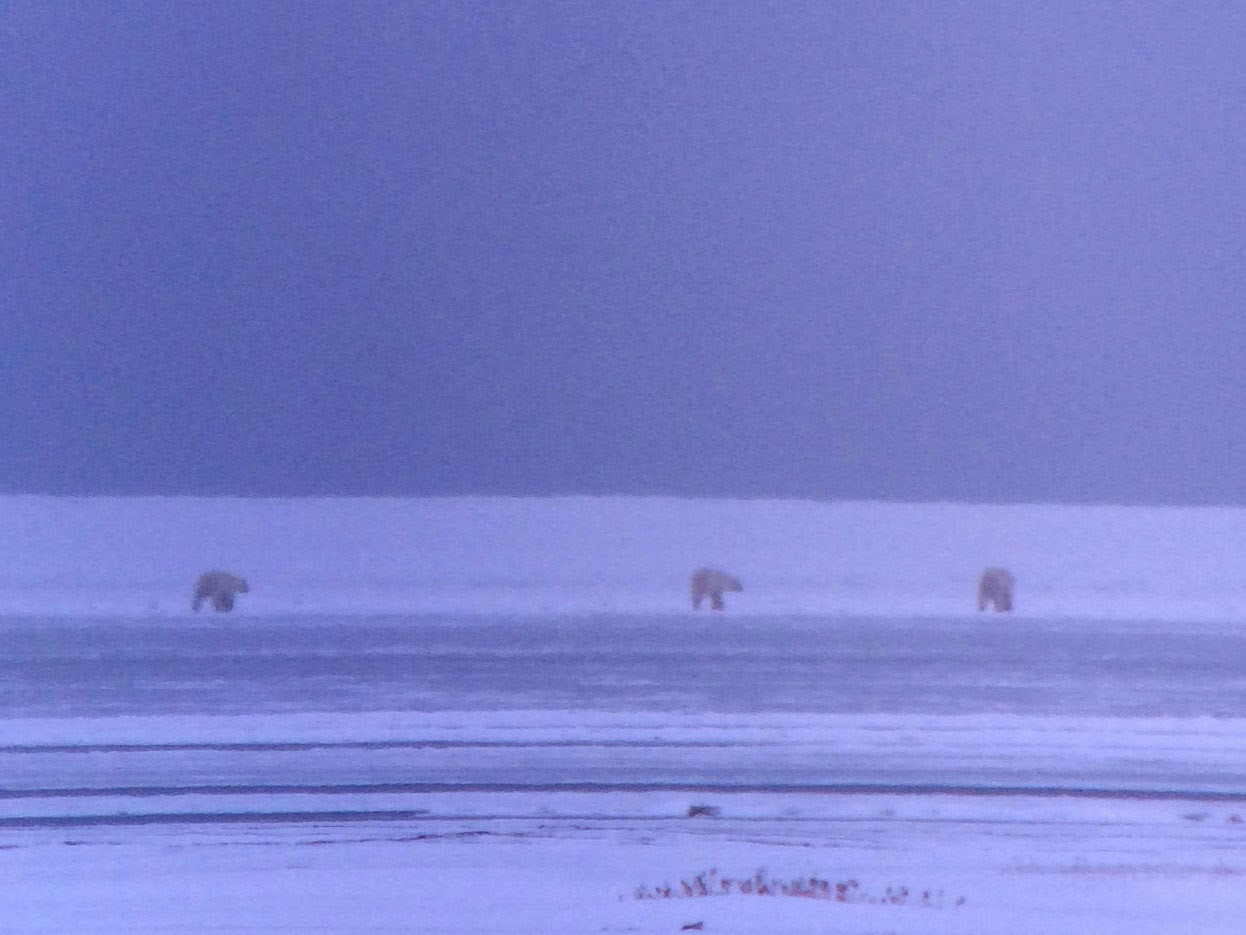 Polar bear - family group.
Mothers look after their young until they're at least 2 years old.

Back in town it's October which means this month in Barrow is Fire Prevention Month... 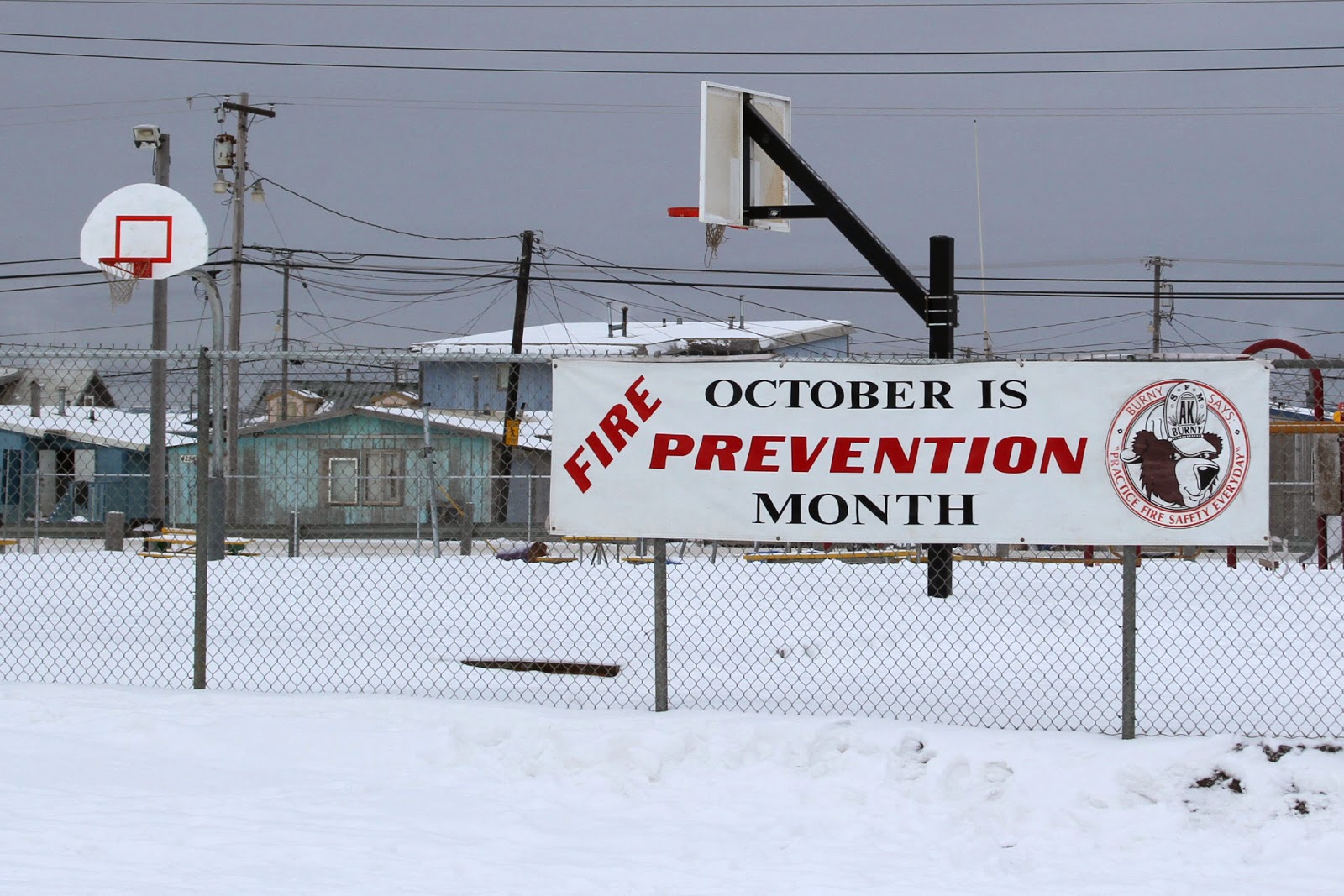 Unfortunately, that meant that Sept probably wasn't, which was when Pepe's, arguably the best restaurant in town, burned down. 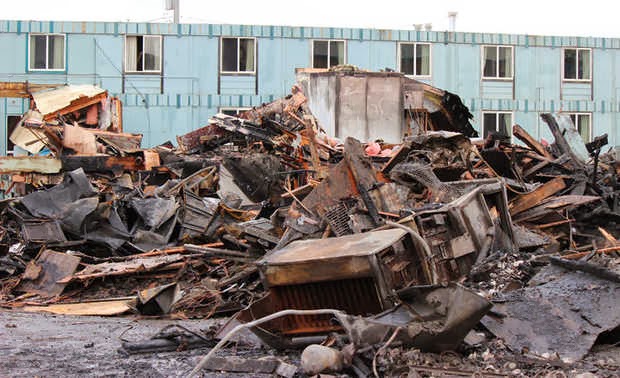 Maybe they should make every month fire prevention month??

After 2 days of not feeling my extremities, I'm heading back south, to the warmer climes of Anchorage. I'm very happy to have seen Ross's Gull, and disappointed to miss Ivory Gull - I'd love to see one on a whale carcass where it should be, and not lost and off course somewhere in the lower 48. There's a good chance Ivory Gull will turn up later this week, but I'm too cold to wait! I'm cold and tired, and looking forward to a good meal and a decent cup of coffee. Jay's coming, and we're meeting up with Chris Hitt, who's off St. Paul Island and in town for a couple of days. Party! 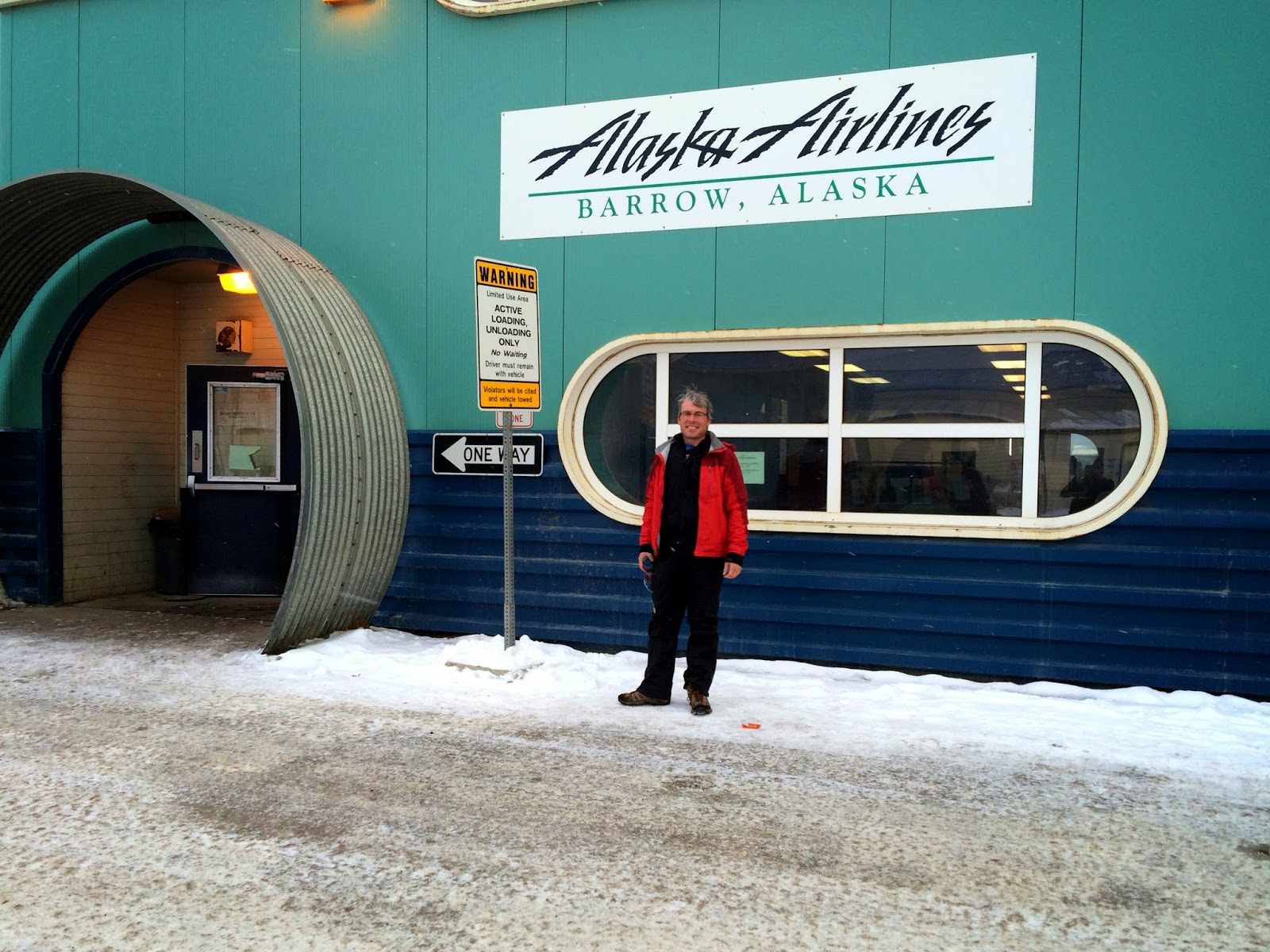 Getting ready to leave. Yes, the airport really is on a main street in town.

I'm not sure where I'll be after Anchorage. I don't really have a plan. In the back of my mind, I'm still thinking of St. Paul and the putchkie hell. The Pribilofs are having a fairly major storm this weekend - extensive west winds blowing in from Asia. I bet they'll get something good. Should I go back? 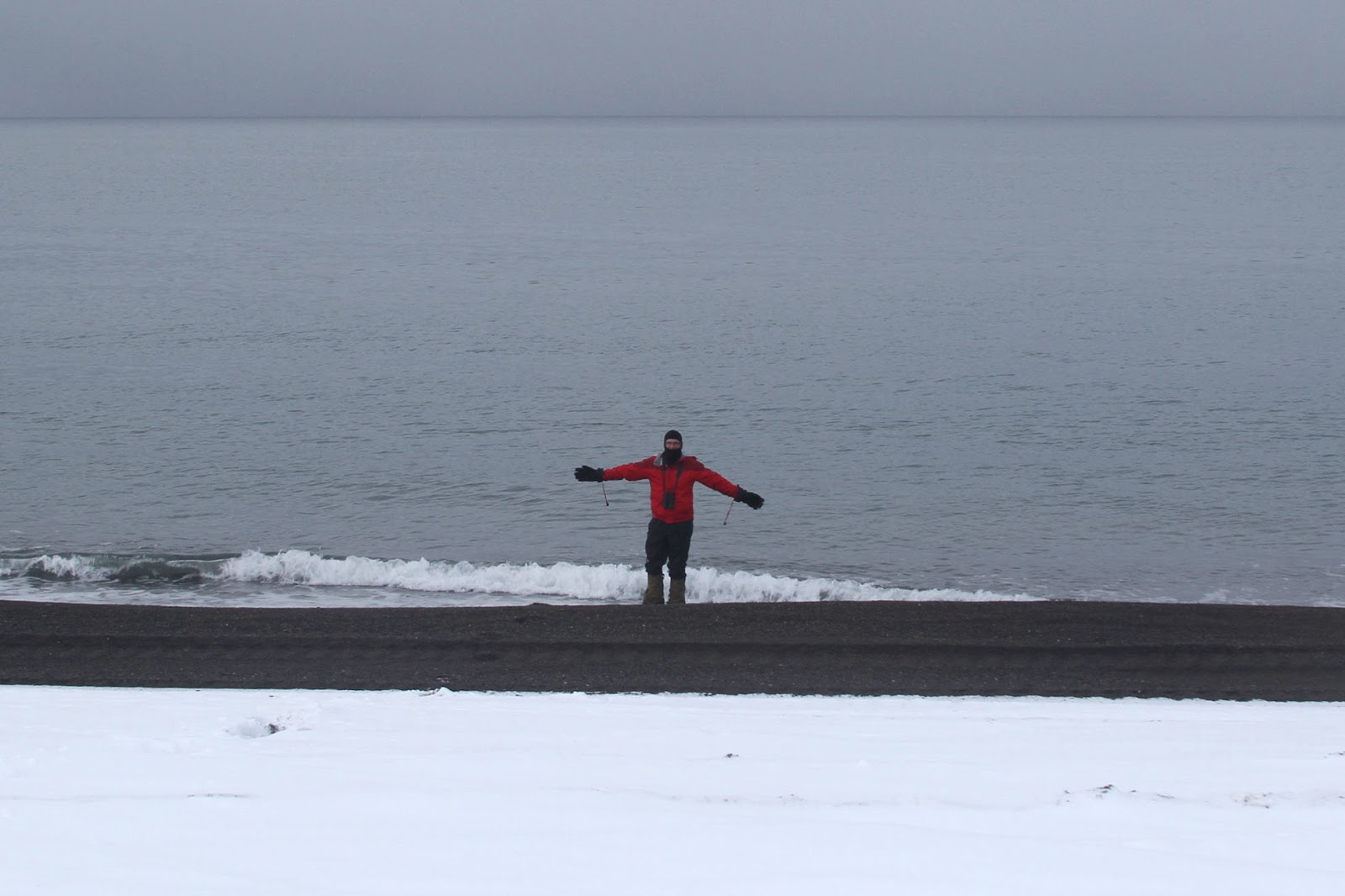 Paddling in the Arctic Ocean.
Apparently not a good way to warm up your feet.