Wednesday, the bird blogs and listservs exploded with news of a *Bahama Woodstar*. A diminutive hummingbird with a fork-tail, purple gorget and white collar, this bird has only been reported in the US 5 times - 4 of which were in SE Florida, and the last of which was in 1981. That’s pretty freakin’ rare - and definitely the *best* bird in the US this year (so far.)

Identification was confirmed by banding, after initially being considered a hybrid hummer (for obvious reasons, BAWO wasn’t on many people’s minds.) News broke yesterday afternoon - precipitating a large-scale fall-out of birders to the Denver PA area.

Denver PA is, unfortunatey, not in MA. It’s 7 hours from Boston. My parents had been visiting from the UK, and I was dropping them off at the airport at 6:30am. If I left then, I could make it to the bird with just enough time to get back the same day...

When I left, there was negative news of the bird (thanks to Alex Lamoreaux for the update.) That’s never a good feeling - especially as hummers pretty much need to feed every 30 mins or, well, they stop humming. But still - I had to try. Things went smoothly on the driving front until coastal I-95 in CT. There was an accident, reducing speeds to zero (and potentially less - I regretted not taking the previous exit and seriously considered reversing back...) For some reason, this road is fraught with accidents, which is a problem when it lies between MA and pretty much the rest of the country. I’ve been stuck on this road many times and cursed the state of CT for just, well, being in the way. I guess it does provide a useful buffer zone for Red Sox and Yankees fans, but otherwise...

I rolled into Denver at 1:30pm, 7 hours, 1 bag of nuts, and several repeat NPR shows after leaving Logan. “Hasn’t been seen for 25 hours” - is not the first response you want to hear from a stranger after opening your car door. (I think my question to him was, “hello”.) I joined the small, disgruntled and rapidly dispersing throng of birders staking out the feeders. It was a beautiful day, the yard was lovely, the...wait - there was an interesting bird at the feeders. Yes! A Purple Finch. I’d driven 750 miles round trip for a freakin’ Purple Finch. But - it was year bird number 491, and would be all I could salvage from this day. I gave the hummer an hour and a half, during which time it didn't show, and had clearly moved on. 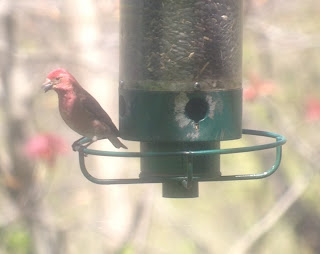 This bird is not a Bahama Woodstar.

The owners were very hospitable - they’d even rented a port-a-potty for the (doubtless) hundreds, if not thousands of birders that would have descended this weekend if the bird had stuck around. Also - they had a bag of local pretzels out for us - which, like the hummer, had also sadly disappeared by the time of my arrival.

It was a long drive home...