THE FLORIDA EXOTICS - SWAMPHENS AND PARROTS

I apparently slept through 4 phone alarms this morning, and a wake up call. And I felt great for doing so! Clearly, much in need of a morning of recovery after the insanity of yesterday, I didn't leave the hotel until 7. (That's a shameful 2 hours after the intended departure time.)

Although I'd planned to head straight for Miami, I was sidetracked by some late reports from yesterday: a pair of presumably post-nuptual Gull-billed Terns at Honeymoon Island, and the Black-whiskered Vireo at Fort de Soto. Both these were worth spending the morning tracking down - and potentially the still-elusive Gray Kingbird. Hotel breakfast (nice eggs!) and off...

Even with such a late start, I managed to arrive *before* Honeymoon Island opened (and no, the island isn't named after it's late-morning sleep in - rather the shape.) I did manage to scope some of the bay area, and saw Sandwich, Least and Forster's Terns, but no Gull-billed. Also on the mudflats, darting about around the feeding shorebirds was a lovely Reddish Egret - my first proper look this year at a dark-morph bird.

I left despondantly, cursing the lack of the right kind of Tern, and still not seeing any Gray Kingbirds. Wondering where the hell the latter were, I soon discovered - hanging out in front of ugly condo complexes! I had a bird on the wire, which, after making a bit of noise, flew off to a secluded tree. Here's the bird - lovely big bill, hooked at the end. Note the dark mask on the gray face. Larger than expected, and similar voice to Eastern Kingbird. 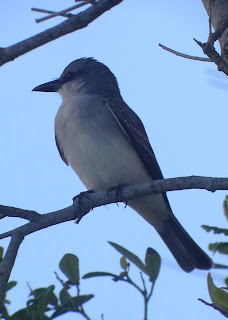 Gray Kingbird - they do exist!

Raced back to Fort de Soto, and found the right Vireo area this time - after receiving proper directions from the Florida listserv. There was a real fountain and a house this time - which I should have realized wasn't what I saw yesterday! Lots of warblers - probably more Cape Mays than I've cumulatively ever seen. I love the red faces of the males. BT Blues, lots of Blackpolls, Parulas, American Redstarts, Ovenbird and a singing White-eyed Vireo. Apart from the latter, none of the others were singing - a big difference to seeing migrants in MA where the calls make them a lot easier to find.

Despite the nice warbler variety, I spent a fairly miserable 2 hours not finding the Black-whiskered Vireo. I did find the tree that it's often seen in... 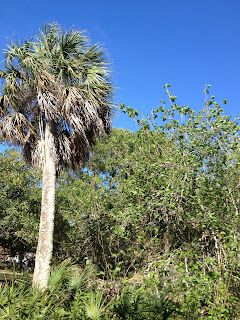 The (5 hour) drive to Miami took me across the state on "Alligator Alley". A slight misnomer - it's a regular highway, not an alley, and there (sadly) weren't any alligators. The 10 foot fences on each side of the highway probably made it a little difficult for the critters to enter the alley. Did see Red-shouldered Hawk and Swallow-tailed Kite while driving - there's always great birds to see while driving in Florida.

As the alley hits the civilization of the east coast, I turned off for Chapel Trail - a boardwalk marshland that's famous as the spot for Purple Swamphen. This is an old world species - with many subspecies found throughout Europe, Asia and Australasia. Apparently, the Romans liked keeping them, and was one of the few birds that they didn't bother eating. It didn't occur in the US until the 1990s, when several managed to escape from captivity. Despite an attempt at eradication, they prospered here, and are now an established part of the avifauna. The ABA recognized this by adding them to the list in Feb 2013 - hence the huge number of reports from excited birders who can add a new tick to their lists.

Unlike Black-whiskered Vireos, Purple Swamphens do not hide in trees, not moving or making any noise. Finally - a bird that takes less than 3 minutes to find (including parking, assembling scope, running out of car, locking said car.) Larger than Purple Gallinules, with a red bill and frontal shield, there's a certain hard elegance about these birds. 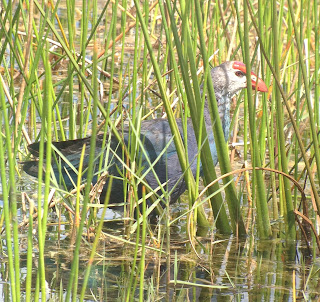 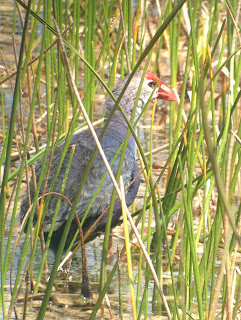 I ended the day at Virginia Key, to try for the La Sagra's Flycatcher - reported here as recently Friday. This is a Myiiarchus flycatcher, like the Nutting's and Ash-throated - but almost white below, with little if any yellow. Also, a very distinctive call - "wink." Unfortunately, I never got to hear the call - or see how white the underparts were, or the tail pattern - as the bird never showed. I did, however, meet Angel and Mariel, local birding stars who've found more than their fair share of rare birds.

One of the nice things about Miami is the wild parrot populations. You always have a chance of seeing these as you're driving around. Or - more likely - stopped at lights with endless traffic ahead of you. This time I was driving, and the reflex of shoving my foot on the brake caused the driver behind to almost hit me, and definitely lose her patience, as well as a few curse words yelled through the open window as she passed me.

This was a new bird for me - Orange-winged Parrot. No - they're not countable, but very cute. 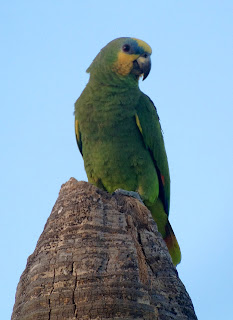 Orange-winged Parrot. The orange is limited to a small portion of their secondaries (just visible in this pic.) Predominantly green, with subtle coloring of yellow and blue on the head, and yellow in the (very short) tail.

If that weren't enough, my hotel had a parrot hotel in front of it. Hundreds of Mitred Parrakeets... 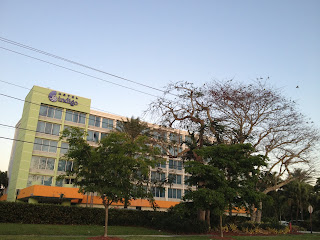 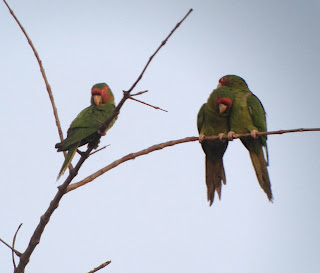 Mitred Parakeets - even in a massive flock, 3 can be a crowd...

Why aren't these on the ABA list? I've seen way more of these in Florida than all the other escapees added together. These guys are clearly doing very well.

Now, just need to find someone who's fed up with their pet Black-whiskered Vireo, and plans to release it...