It's 5:30 in the morning at Hatteras, NC. I breathe a huge sigh of relief and silently thank the pelagic sea gods. I'd slept in the car the previous night, listening to the wind howling outside, wondering if this last-minute trip was wise; yesterday's storm cancelled both pelagic trips in MA and NC, and threatened to derail today's plans. It's going to be rough, warns Brian Patteson, but we're going.

And rough it was. Half the boat were sea sick, with some spending almost the entire day running between the side of the boat and emptying what was still left of their stomach into the Atlantic, or hunched over in a state of nausea. I counted myself lucky, among the few that felt fine the whole day.

The blue, azure waters of the gulf stream weren't far from shore, although we had to fight to get out there. We were seeing the usual stuff -  good views of Audubon's Shearwaters, Wilson's Storm-petrels, large numbers of Cory's and a few Great. Oh - and an Ovenbird that whizzed past, probably wishing that it was hunkered down somewhere on dry land. As we reached the warm waters of the gulf stream the current was far stronger, tossing the boat around every time we stopped for a bird.

There were some great birders on board, including Tom Johnson. I'd known Tom from his tantalizing eBird reports filed from way out at sea - places only describable with a set of GPS numbers. He's a bird spotter for NOAA, and spends large amounts of time doing surveys along maritime transects. I'd imagined him as a wizened old fisherman type, pipe in mouth and sou'wester on head. Of course, he's anything but - young, no pipe, but he did have the requisite facial hair and a noticeable ease at sea.

The waves continued to pound as we make our way slowly through the gulf stream, looking for sargasso and the birds it attracts. At times, several of the many Black-capped Petrels we encounter follow the slick, performing dazzling aerobatic maneuvers as they're seemingly thrown about in the wind. It's amazing they're not throwing up too after the G-force they must be experiencing.

"TRINDADE PETREL. TRINDADE PETREL. 7 O'CLOCK" It's Tom Johnson shouting, and within seconds the stern is full of excited birders, fighting to hold on to the pitching boat, binoculars and cameras in hand, all staring in the same direction. And there it is! A dark Pterodroma petrel. It's probably the only bird we see today that doesn't have a bright white underwing. The bird is solid dark above, with a silvery-gray streak below. The wings seem impossibly long, reaching out to take advantage of the wind. 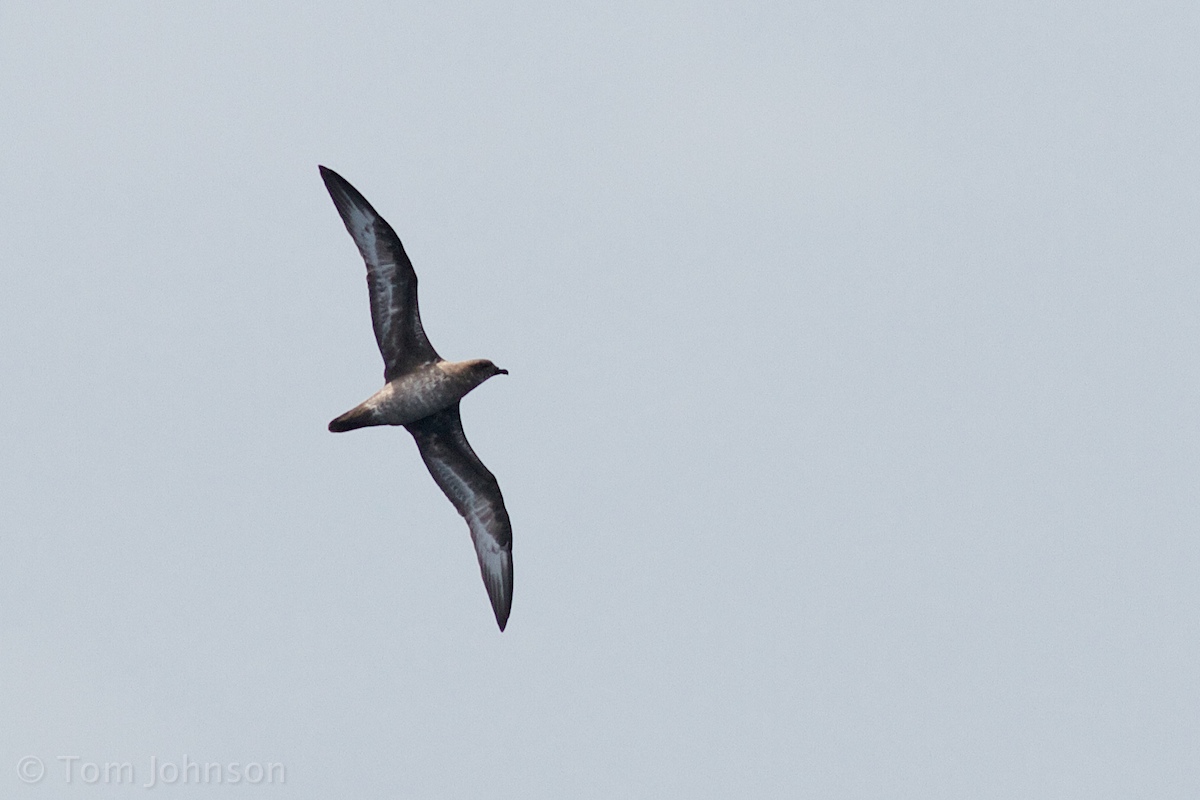 Trindade Petrel is a bird with an identity problem. Open up your field guide or checklist, and you might not find it. Variously named Trindade, (and a bunch of misspellings such as Trinidad, Trinidade) or Herald Petrel, it's a bird that ornithologists are realizing is a complex of more than one species. The bird we've (almost certainly) seen is Pterodroma arminjoniana arminjoniana which breeds on islands in the South Atlantic, off Brazil (Trindade and Martin Vaz.) The Pacific subspecies, P. a. heraldica is considered by many to be a distinct species. Oh - and there's also a form that breeds in the Indian Ocean...

Whatever it's called, I'm happy! After making the trek to Hatteras three times this summer, I finally come away with a rarity. And although a different bird, it makes up for the cancelled Mass pelagic and the White-faced Storm Petrel that's now relegated from my list of gettable birds.

It's the last pelagic out of Hatteras this summer. Thanks to Brian and Kate for making these such great trips - they do a fantastic job finding birds out there and getting birders onto them. If you've never been - then go! You can find them here.

And that's it for the east coast. After a brief visit home - barely long enough to pack and say hi / bye to Gerri and the cats - I'll be heading west, to Seattle and then to Gambell, on St Lawrence Island, Alaska. A place where you really can see Russia. And hopefully lots of Russian birds too.