I'm in Washington State, 4 days before my flight to Alaska and St. Lawrence Island. I'm here for a couple of geographically-convenient targets birds: Vaux's Swift (my last code 1 bird of the year) and Sky Lark. As I'm on my way, I hear from my local Big Year friend, Hans de Grys, that there's a Smith's Longspur out at Ocean Shores. It's quite a rarity out here (they breed in central Alaska) and is attracting a lot of attention from state listers. And from me - it would save a trip down to the grasslands of Oklahoma this winter. A trip I'd be more than happy to miss!

As I land, I check the local listserv (rather cutely called Tweeters) and find the bird was seen first thing this morning. Fantastic! I have enough time to get the Longspur first, and then head back to Seattle for the Swifts. I'll have plenty of time to relax before Alaska and catch up with Hans.

Ocean Shores forms the northern entry to Grays Harbor, a vast estuary of the Columbia River south of the Olympic peninsula. It's the second time I've made the 3-hour drive this year (the first being for Rock Sandpiper back in February.) The road gets narrower, windier and slower until I finally arrive at the wind-strewn beach that is Ocean Shores. 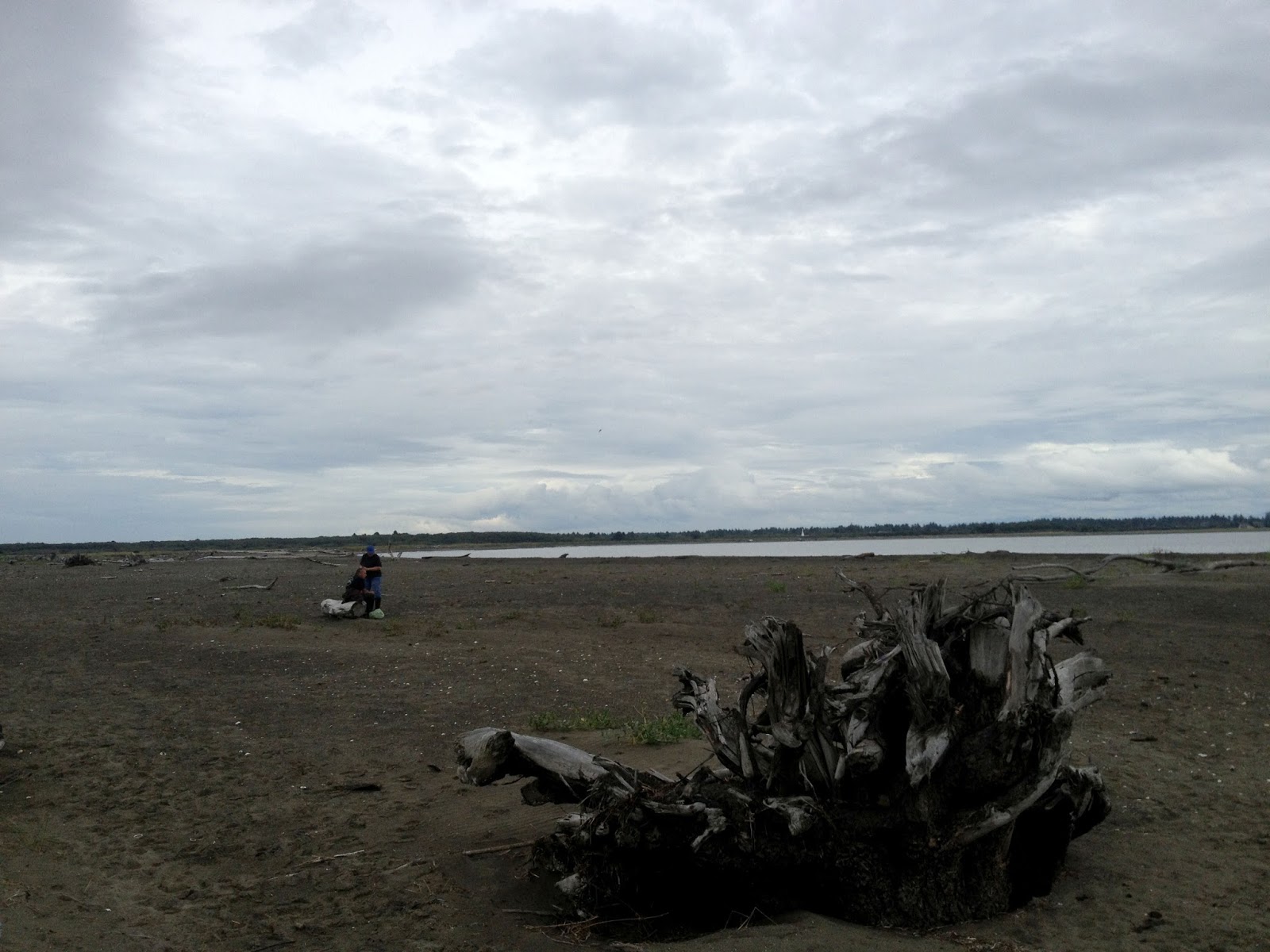 There's a good number of birders there when I arrive. And most of them are leaving. There are generally two types of leaving in birding: (1) you've seen the bird and you're happy to leave; (2) you can't find the bird and are giving up and need to get home to feed the kids / feed the pets / it's already 2 hours later than you said you'd be home (honey) / you've realized this is a ridiculous hobby, this is the last bird you're ever chasing and you're going to take up knitting instead. From the dejected faces, I could tell this was the bad kind of leaving. It's not long before I hear the scuttlebutt -  a dog walker came after the first sighting and they (presumably the canine part of the double act) scared the bird off. Despite much stomping around in the short grass, the bird has not been seen since. Damn!

I spent an hour walking around the short grass, mainly to reassure myself that it really wasn't here (it wasn't!) and then gave up. 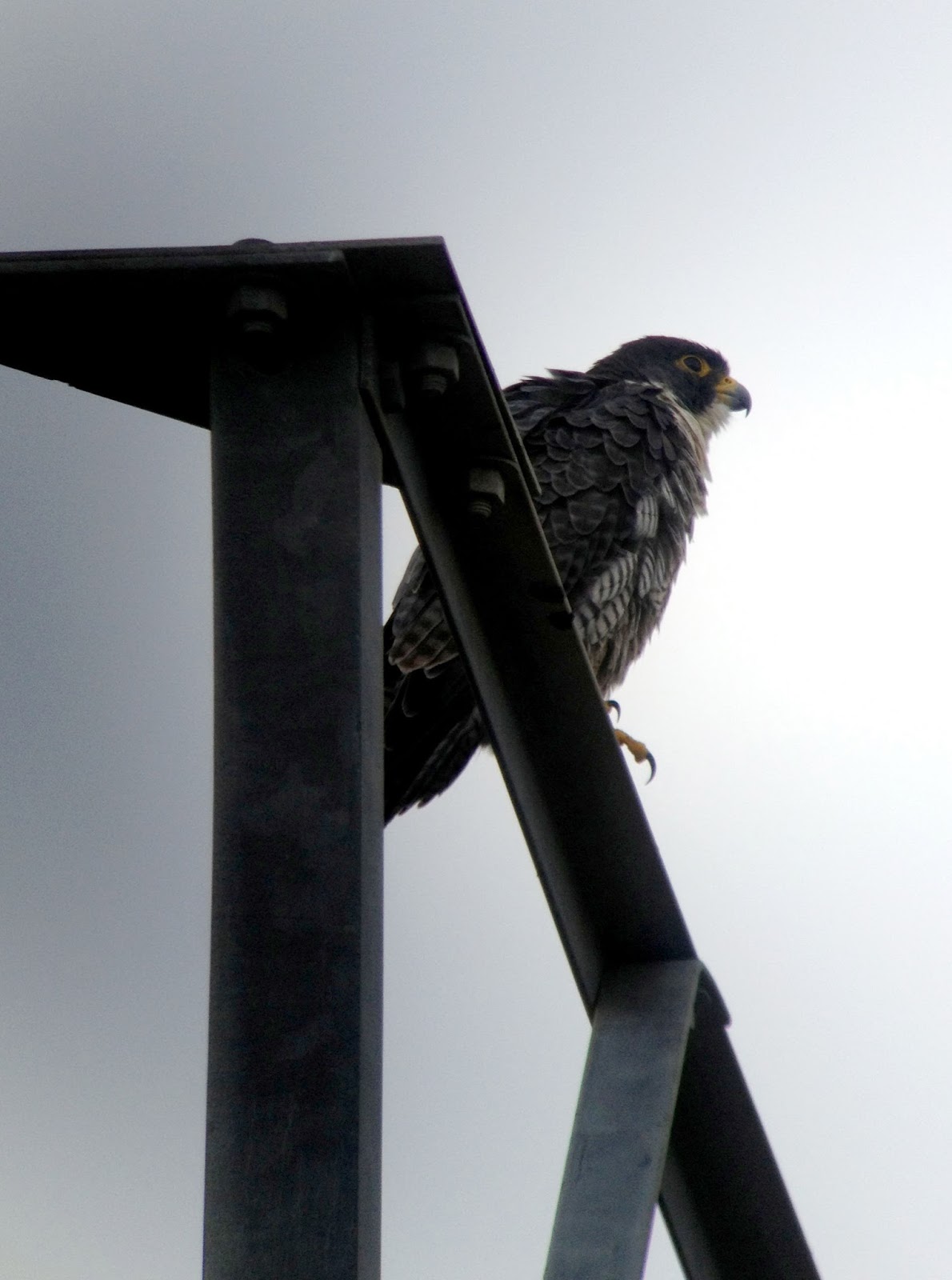 Peregrine Falcon - probably not helping in the Longspur (no) show.

Eight hours later, I arrive back in Seattle. OK - it was really 4 hours - but based on much empirical data I'm aware of a multiplier effect (of at least 2) after missing a bird that makes the drive back seem much longer. And even with the novelty effect of Kurt Cobain having grown up there, Aberdeen is still not the most exciting place through which to drive.

Frank Wagner Elementary School in Monroe is famous throughout the US birding scene as a roosting site for migrating Vaux's Swifts. The loss of their natural roosting sites - big hollow Douglas Firs - has concentrated the birds in man-made structures such as chimneys, which provide an internal surface on which the birds can cling (swifts cannot perch, they can only hang.) It's one of only seven sites down the west coast which support the vast majority of migrating swifts, most of which have recorded up to 20,000 birds in a single evening. 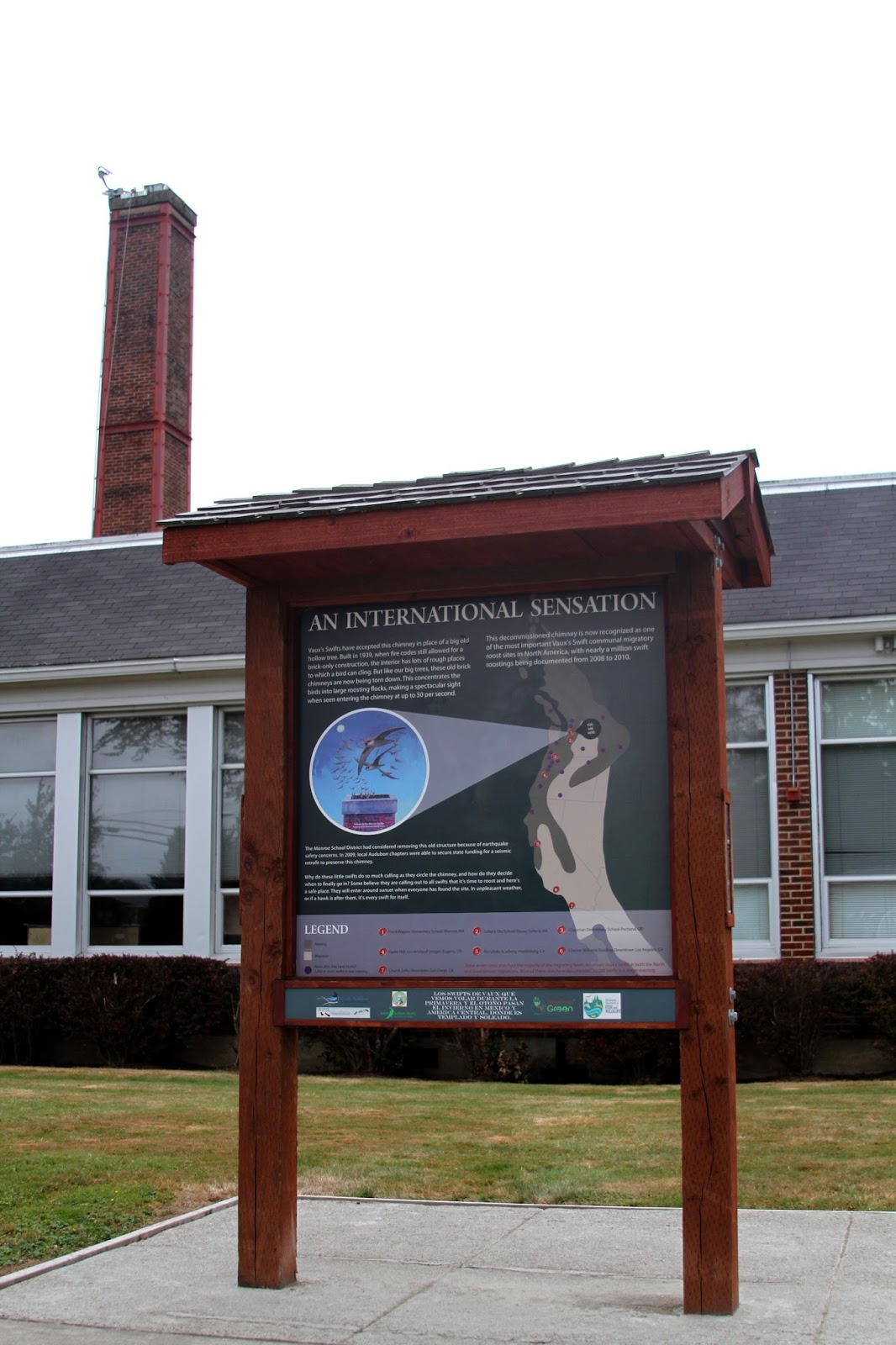 Monroe Elementary School - with the chimney in the background.
(The chimney is no longer used, but has been preserved for the swifts.)

I arrive in Monroe an hour before sunset, and as soon as I get out of the car I hear swifts above me. They look like the cigar-shaped Chimney Swifts of the east coast (and one of about 5 birds that appears on my paltry yard list) but the call is much softer and sweeter. 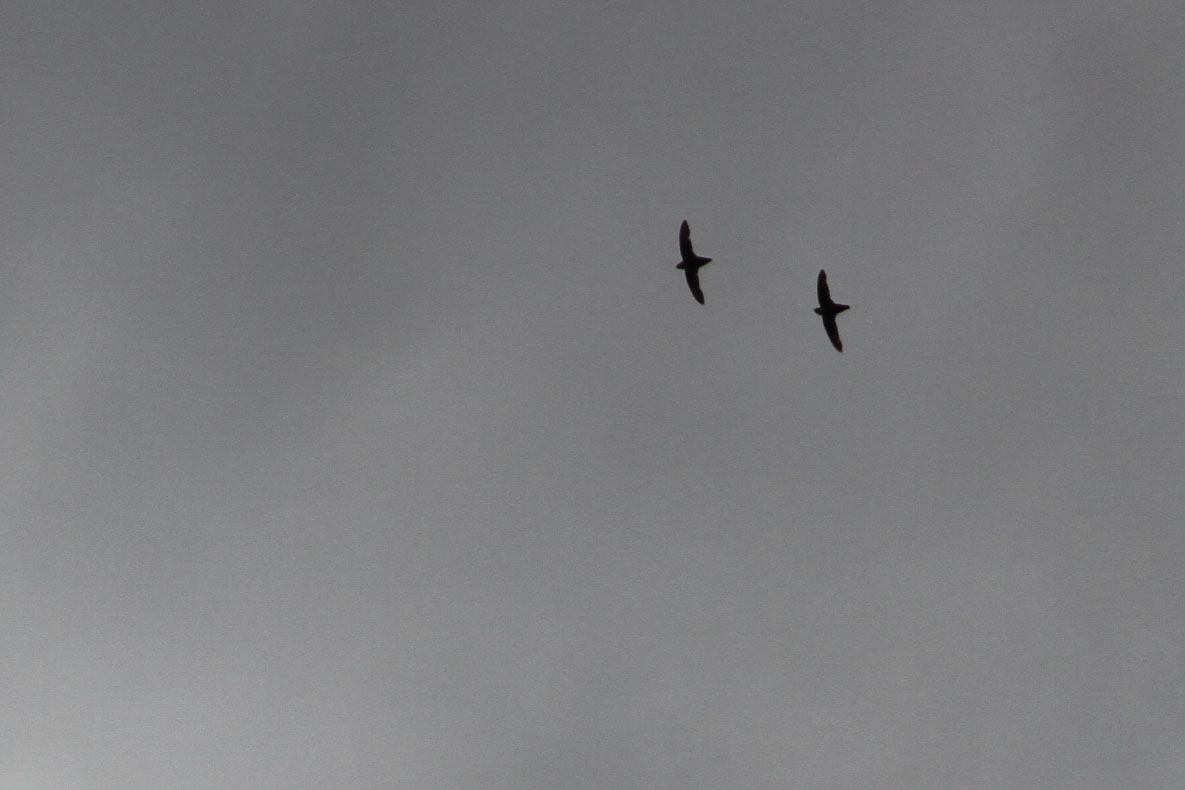 Vaux's Swift. Notice the cigar-shaped body and the crescent wings.

For the next hour the birds continually swirl over the school in a giant seething mass. They're in constant contact with each other chattering away high above me. Occasionally one makes a  sortie for the chimney, diving straight for the opening only to pull away at the last minute. The latter activity increases steadily towards dusk - they're either practicing the approach for the actual landing, checking to make sure the chimney is safe, or just having a lot of fun!

As it starts to get dark, and the birds are presumably convinced that all their friends are there, they suddenly start entering the chimney. Again they hurtle towards the opening, as a column of birds, then put the brakes and gently flutter in. They reverse direction in doing so, from head-first to tail-first. If you drove past this, you'd think they were bats. 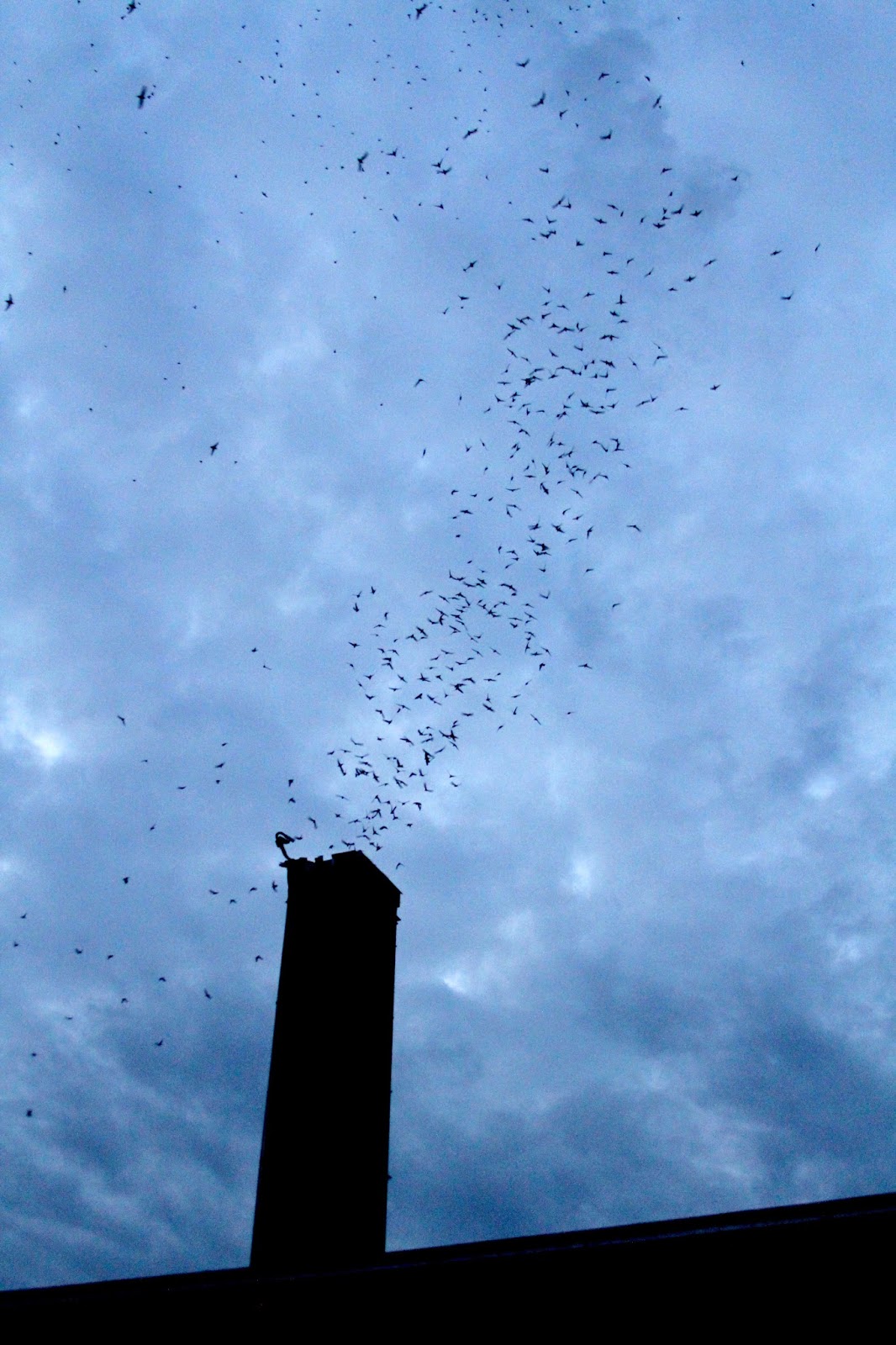 Vaux's Swift funneling into the chimney for the night.
Swifts spend the whole day on the wing, never perching. They must be pretty tired!

And within 5 minutes they're gone! Inside, they're hanging from the walls and are packed like shingles. By overlapping each other like this they're able to conserve body heat and enter a state of torpor for the night, like hummingbirds (bizarrely their closest relative in the avian world.) The camera at the top of the chimney counts the number of swifts roosting each evening - tonight it's 728.

Swifts entering the chimney - the movie.

As the darkness becomes complete I head off north, ready for my trip tomorrow to Vancouver Island, Canada. I'm going for one of the last exotics on my list - the Sky Lark, a bird introduced from Europe. And like many of the exotics, it's not doing so well.

Oh - and I guess the dog didn't do such a great job of scaring the Longspur away. It was seen this evening, sitting on a log posing for pics. Damn! Now, where did I put those knitting needles?