This is a week of second chances. Yesterday's Blue-footed Booby was, incredibly, the second chance this year for a bird that is often absent most years from the ABA region. And today was my second chance at another previous miss - Curlew Sandpiper. This time on Long Island, NY.


Phoenix was thus a quick stop - flying in from Virginia in the morning, and out on the red eye at night. Red eye? More like red ribs after spending the night squished between the window and a very elbowy neighbor. At least the free eye mask meant I didn't have to witness the claustrophobic seat invasion.

The Curlew Sandpiper was first reported on Sunday, about a week after the one I missed on Plum Island, MA. Given the latter bird only stayed for 2 days, I was nervous about chasing this one. Hey - it could even be the same bird; Long Island seems to be on the flight path for shorebirds leaving MA - at least that's what seems to have happened for the Red-necked Stint earlier in the year.

Ninety minutes after leaving Queen's I arrived at Mecox bay, a sheltered cove on the east end of Southampton. The area the bird was frequenting was easy to find: follow the trail out to the beach, turn left when you see all the muggles having fun (swimming, sun-bathing, throwing frisbees), climb over sand dune (taking care not to entirely fill your shoes with sand) and enter a secluded, smelly mud flat (replace sand in shoes with mud.)

The smelly mud flat was teeming with shorebirds, terns, gulls, and… 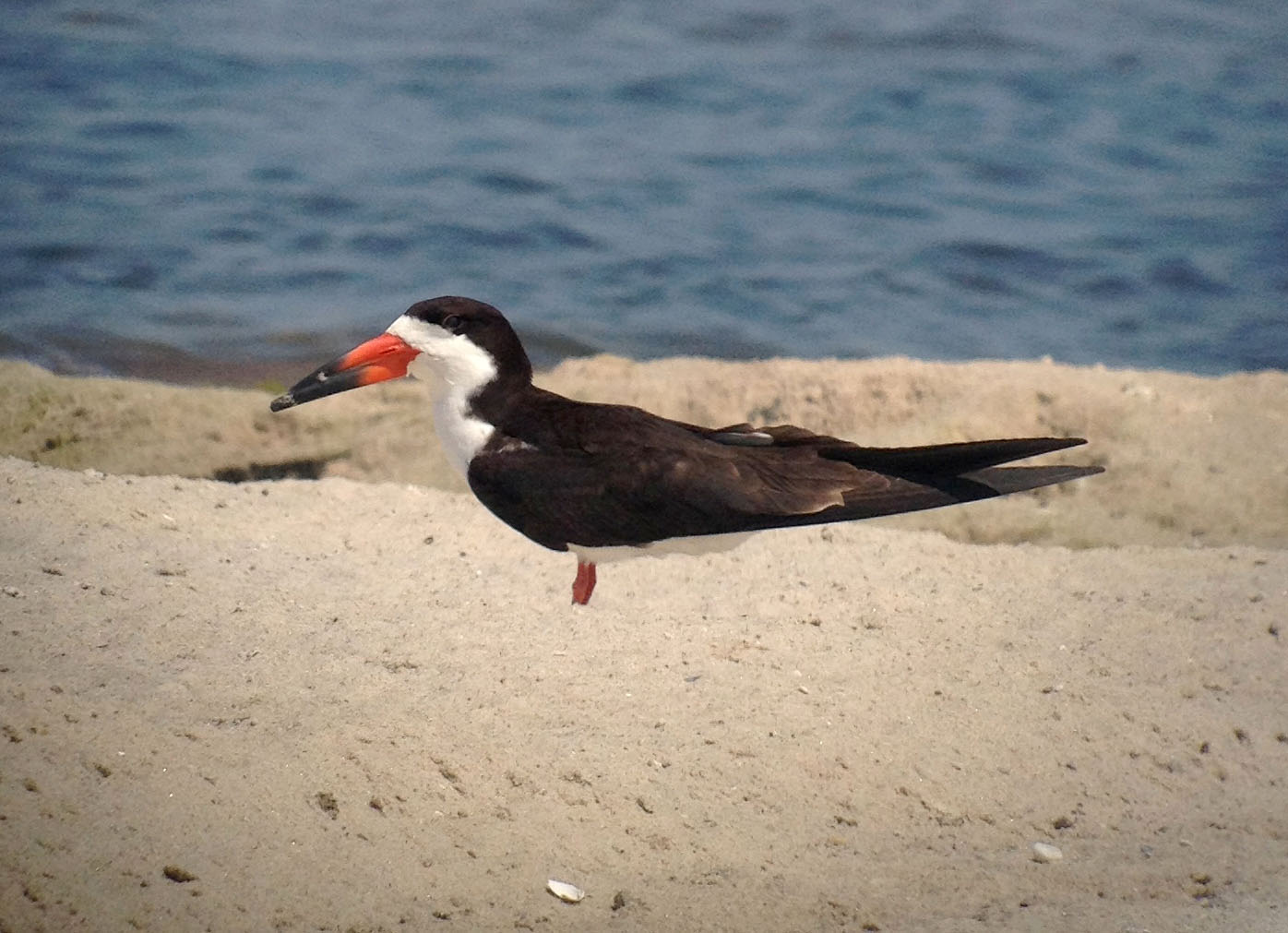 Black Skimmer. What a beauty!

Lots of Semipalmated and Least Sandpipers, Plovers, White-rumped Sandpiper, Sanderling. But no Curlew Sandpiper. This was a pretty small area, with most of the birds clustered around a pile of rusty metal wire. If it wasn't here, it wasn't here. I'd had a feeling this could be an awkward bird. It's a fairly common rarity, but one that's actually quite easy to miss. I start walking around the mudflats, in case I missed a few spots. Nothing. And then, as I come back to the metal heap, I see it: large shorebird, reddish body, long, drooping bill. It's feeding non-stop, like a clockwork toy, spinning around picking at the mud. Curlew Sandpiper! 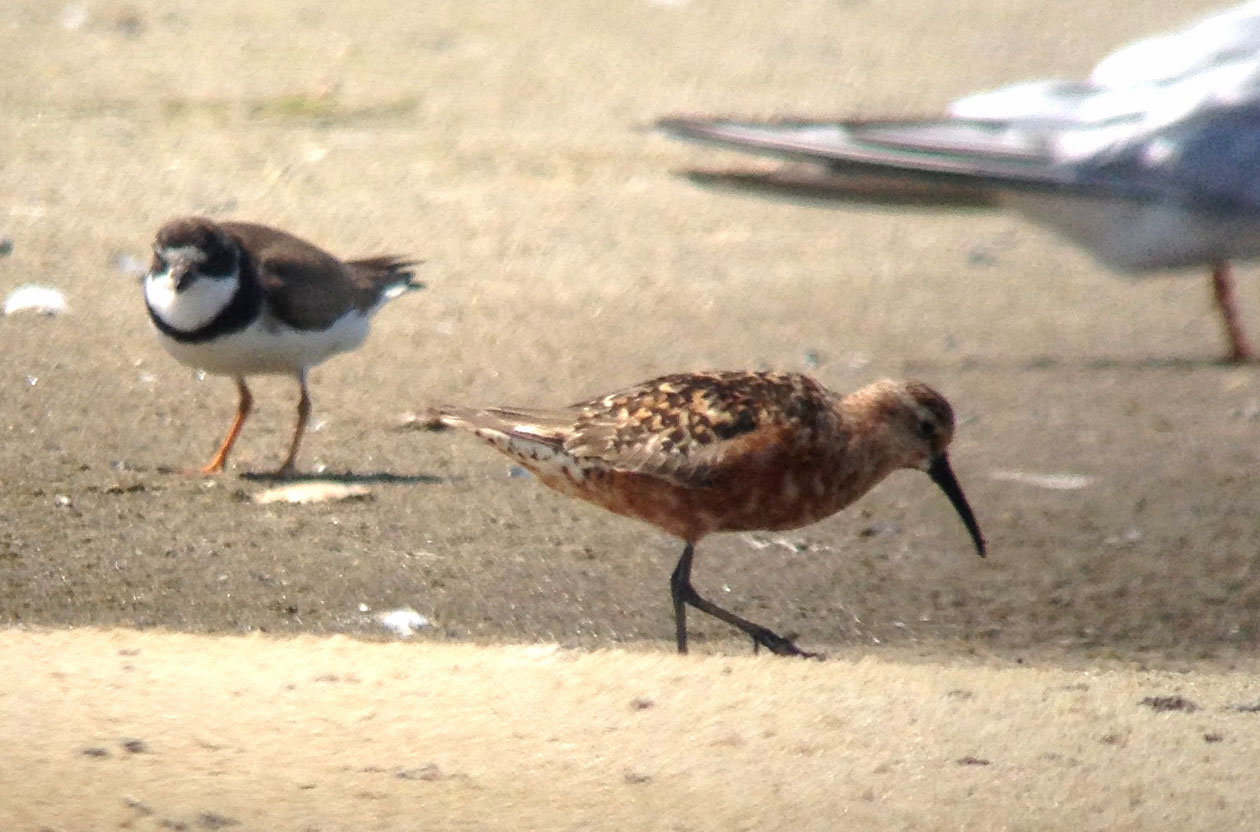 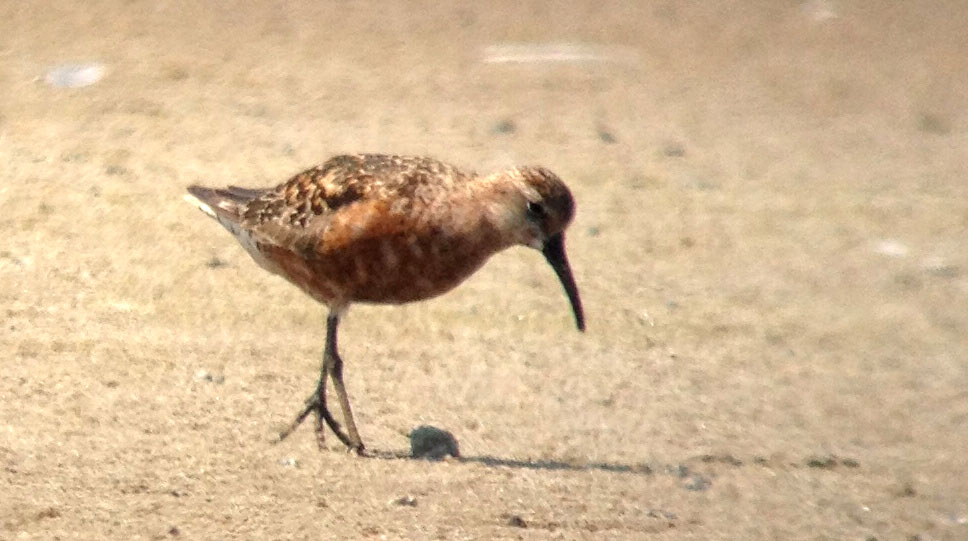 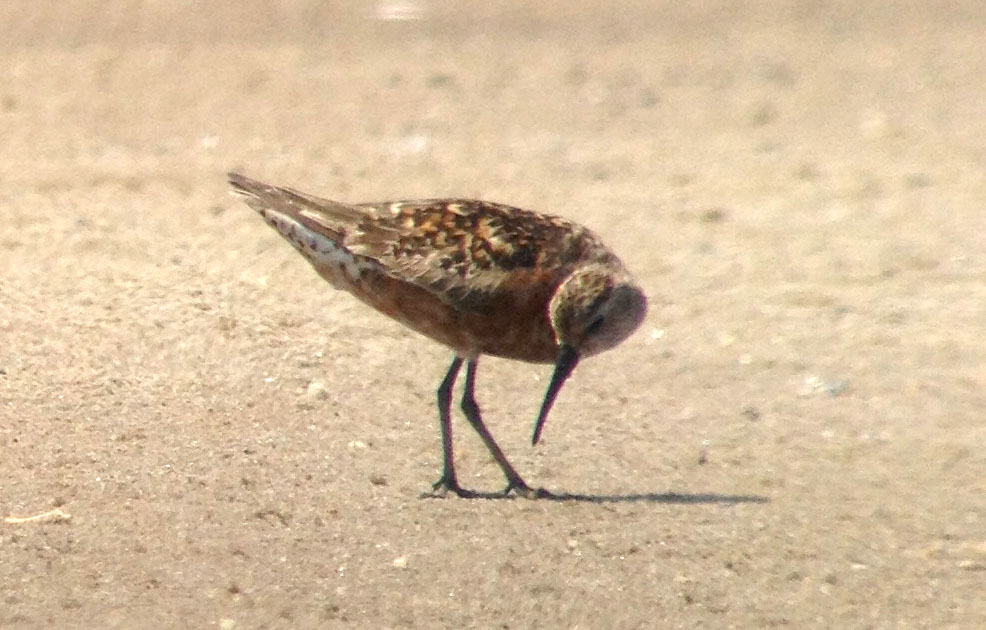 Curlew Sandpiper.
Note the deep red undersides which are splotchy - it's molting into its winter (basic) plumage.
The strong supercilium (eye stripe) is also a feature of the winter plumage.

I watch the bird for about 10 minutes before it dramatically runs over to the metal heap, drops down underneath it, tucks its bill in and goes to sleep! I bet this is where it was hiding when I first arrived. 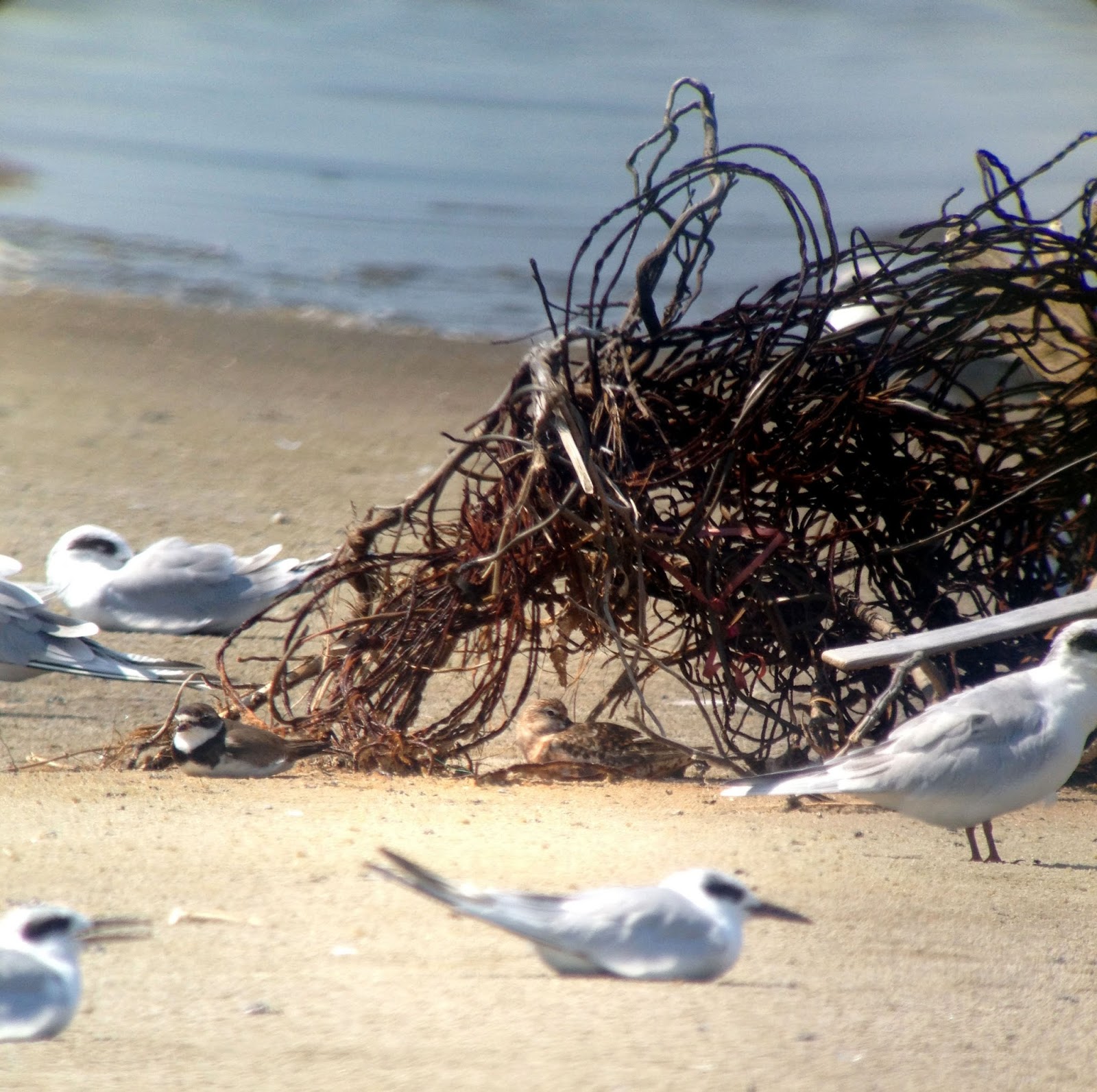 Not the most comfortable of places to sleep, but if I were a Curlew Sandpiper in this heat and bright sun, that's probably where I'd hide. But since I'm not a Curlew Sandpiper, and probably couldn't fit under the wire heap, I instead head back to the shade of the car, which, unlike heaps of rusty metal on beaches, also has a/c. 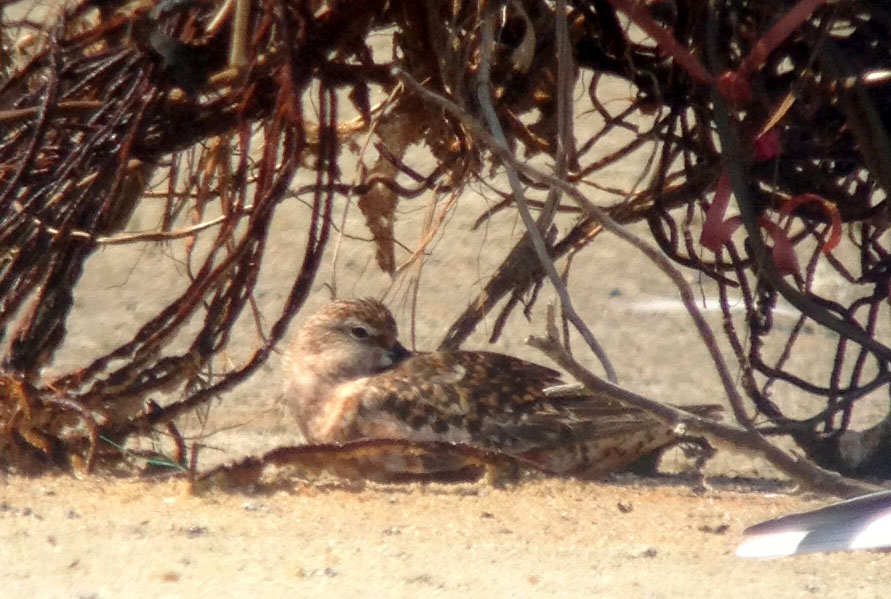 The great thing about being back home in the northeast, is that I get a ride home from Gerri, who very generously picks me up from Queens. The bad thing is the traffic. Those 75 mph roads in Arizona are a distant memory as we're crawling through CT, and then the Boston / Cambridge traffic. But it's worth it to be home again. And it's my first chance to properly celebrate hitting 700 for the year… 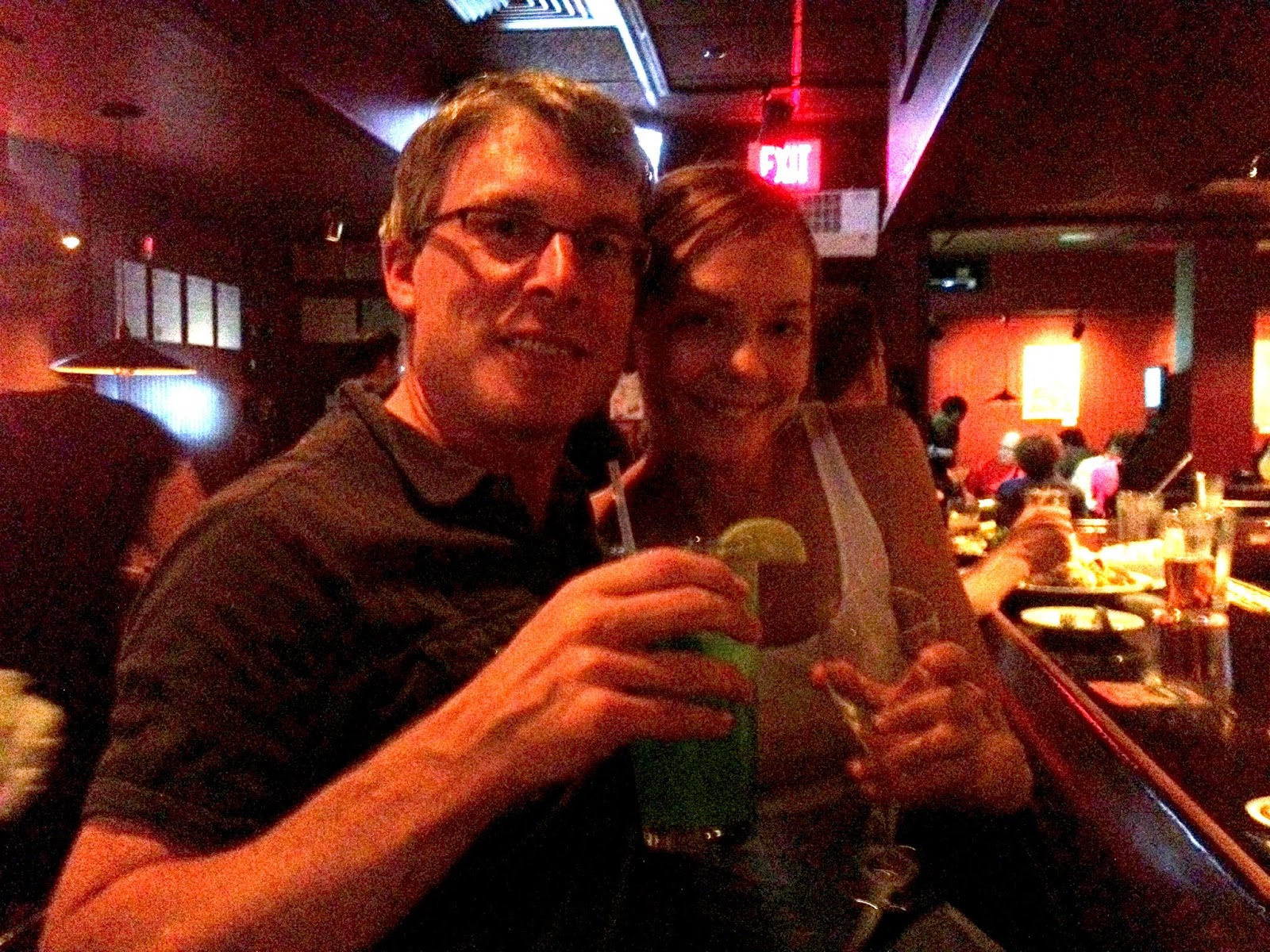 700!
Celebrating at the Cambridge Common.