It's Sunday, so it must be Half Moon Bay. This is the third pelagic in as many days. Which means it's also the third morning waking up in a bed that has a steering wheel and a gear stick. (And I'm less than impressed with the outdoor toilet.)

I'm back on Debi's boat, and Jay's back too. We're making another try for Flesh-footed Shearwater - which we've both missed so far.

It's a beautiful day. As we're leaving the harbor we start spotting Marbled Murrelets bobbing on the water. They're in their handsome black-and-white winter plumage... 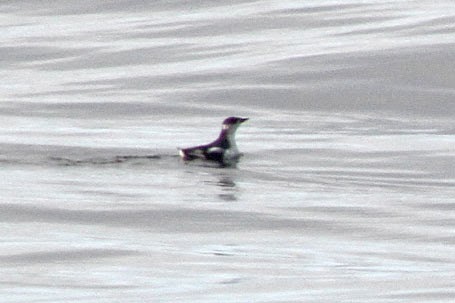 For a long time Marbled Murrelets were an enigma to the avian world - no one had any idea where they nested. Most alcids nest on islands, often on cliff edges or burrows. But apparently not these guys. It wasn't until 1974 that their nests were found - at the top of trees! They favor mature, old-growth trees in coastal forests. Oh, and they're rather partial to mossy trees - and for Douglas Firs the mossification process is only complete after about 150 years. 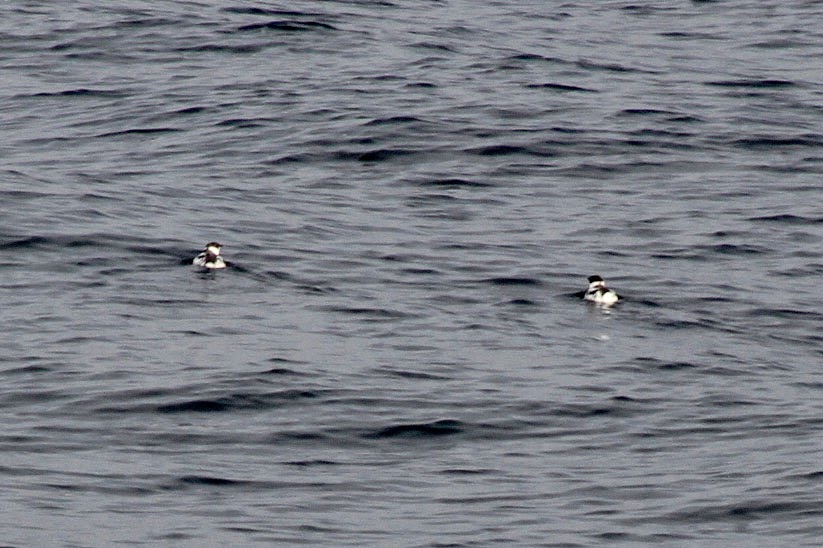 Juvenile bird calling to its parent.


Marbled Murrelets are threatened due to logging, and the replacement of old mossy trees by young unmossy ones doesn't help. In many California parks the really old trees can often be found around picnic areas, which also attracts Steller's Jays. As well as eating human trash, the latter also like eating eggs, especially Murrelet eggs. Current Murrelet conservation efforts are focusing on stopping the jays' feeding behavior - eggs that look like Murrelet eggs are planted around picnic areas. These eggs are mildly toxic - so when the Jays eat them, they throw up, and feel nauseous (I think they put something disgusting in them - like Reese's chocolate.) So far, the program has been very successful - not only do the Jays learn not to eat the Murrelet eggs, but they seem to be teaching their young not to do so either.

As we leave the harbor and progress through the open ocean we start seeing more pelagic species - including one of my favorites, the Buller's Shearwater... 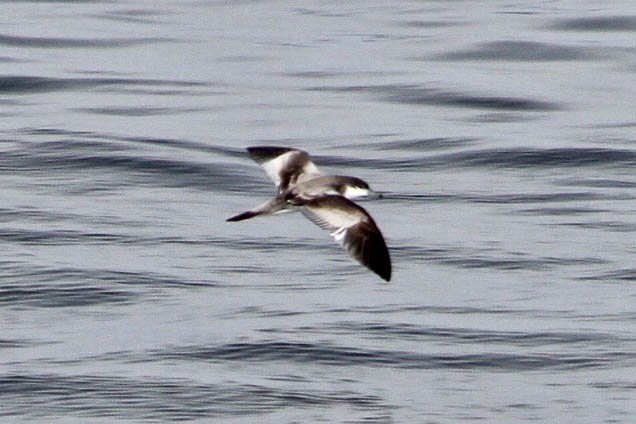 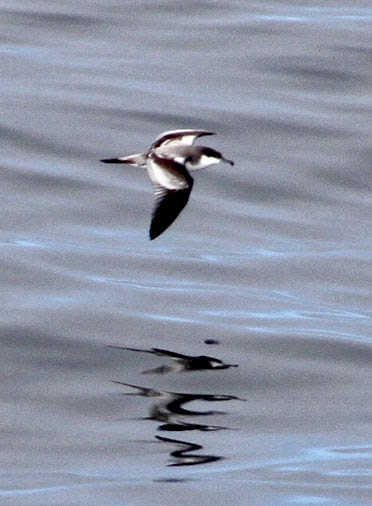 As well as the heavy-set Pomarine Jaeger - one of many jaegers we've seen this weekend. 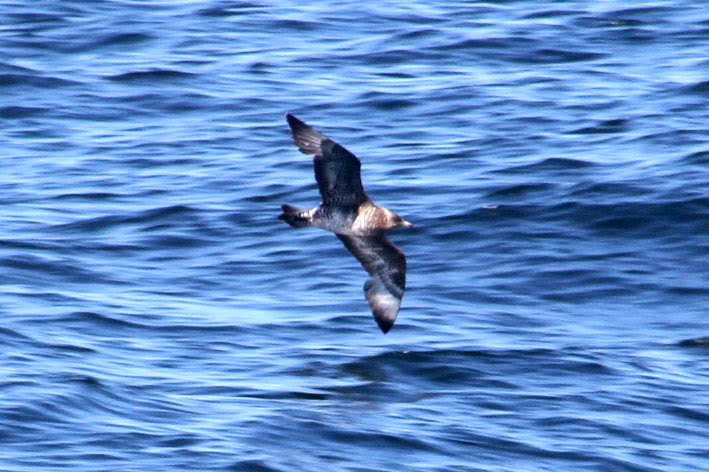 "Flesh-foot!" The boat suddenly wakes up. "3 o' clock on the horizon" We all rush over to the starboard side. The "horizon" is a nebulous concept, loosely defined by the edge of a bank of fog that surrounds the boat. This is our target bird, and I'm nervous about missing it. Which I kinda do. I'm searching with my binoculars until I find a dark shearwater, way, way out, that lacks the silvery underwing of the potentially similar Sooty Shearwater. As I'm trying to see the pink in the bill, it slowly slips into the fog. Gone.

Jay doesn't get on the bird at all, and I'm left with a very unsatisfying and probably uncountable sighting. Neither of us are very happy.


As we're replaying the brief encounter / miss in our heads we're diverted by a somewhat ridiculous fish. It's an Ocean Sunfish - the heaviest bony fish in the world, and probably the ugliest too. They feed almost exclusively on jellyfish - which aren't very nutritionally rich. So rather than evolve into eating something slightly more sensible, they just stuff themselves with as much jellyfish as possible. 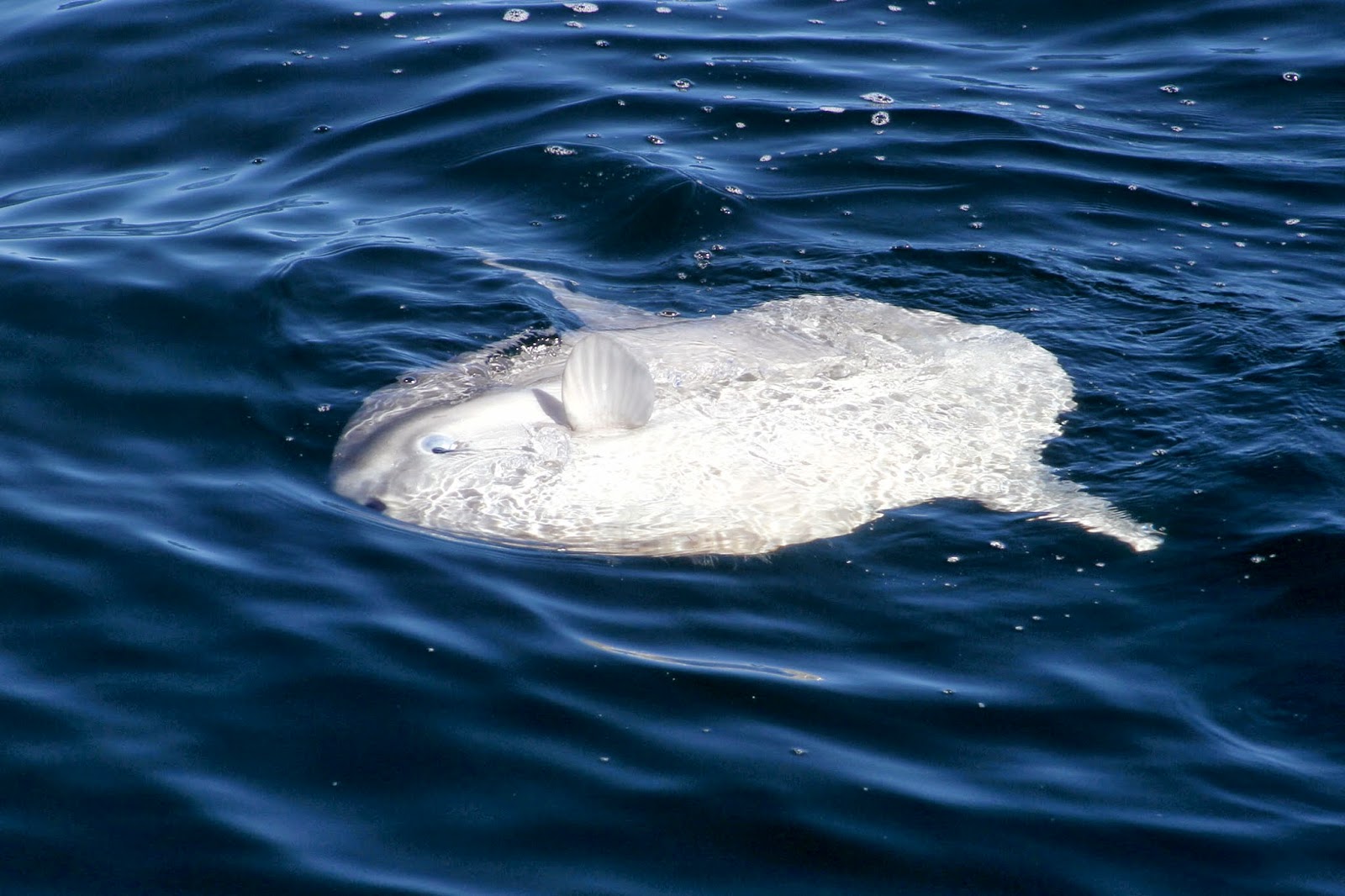 Ocean Sunfish - or Mola mola.
Don't eat too much jellyfish - or you could look like this!

"Shearwaters!" and we're back to birding. Debi's spotted a large group of her namesake bird on the water. We point the boat in their direction and gently approach. "You two up front. Now!" Debi's making sure Jay and I have front row seats for the Shearwater show.

In front of us is a small raft of about 15 birds. They're all Pink-footed Shearwaters, and a few dark gulls. We were hoping for a mixed flock that might have held a Flesh-footed. Oh well. As they start lifting off the water I hear Debi and Jay screaming beside me - "Flesh-footed." And this time, it's right in front of the boat - an all-dark, chocolate brown bird with a bright pink bill. We'd missed it - it must have been sitting among the shearwaters doing a good impression of a Pink-footed. 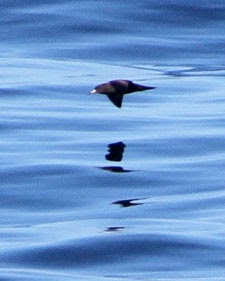 And that's it for CA. I'm flying back tonight on the red-eye (that'll make 4 nights in a row without sleeping in a bed) to Boston for *1* night. Then back west to Alaska. After an unsuccessful Gambell trip I need to catch up on Asian vagrants. So - I'm heading back to St. Paul (Pribilofs) for a week, before meeting up with Jay and heading to Barrow with John Puschock - for Ross's and Ivory Gulls.

But first, I'm looking forward to resting my own flesh-footed legs in a real bed...