Apparently, I couldn't resist. After a brief trip home, the pull of Alaska draws me west again. After leaving last week, Gambell has had an incredible couple of days, with 3 potential ABA life birds for me: Yellow-browed Warbler, Siberian Accentor (2) and Stonechat.

Since I'm on my own this time, (I'm staying at the lodge) I need to bring my own food. I'm hoping the tiny bags of nuts and dried fruit that will only just fit in my carry-on will last me however long I'm out there. 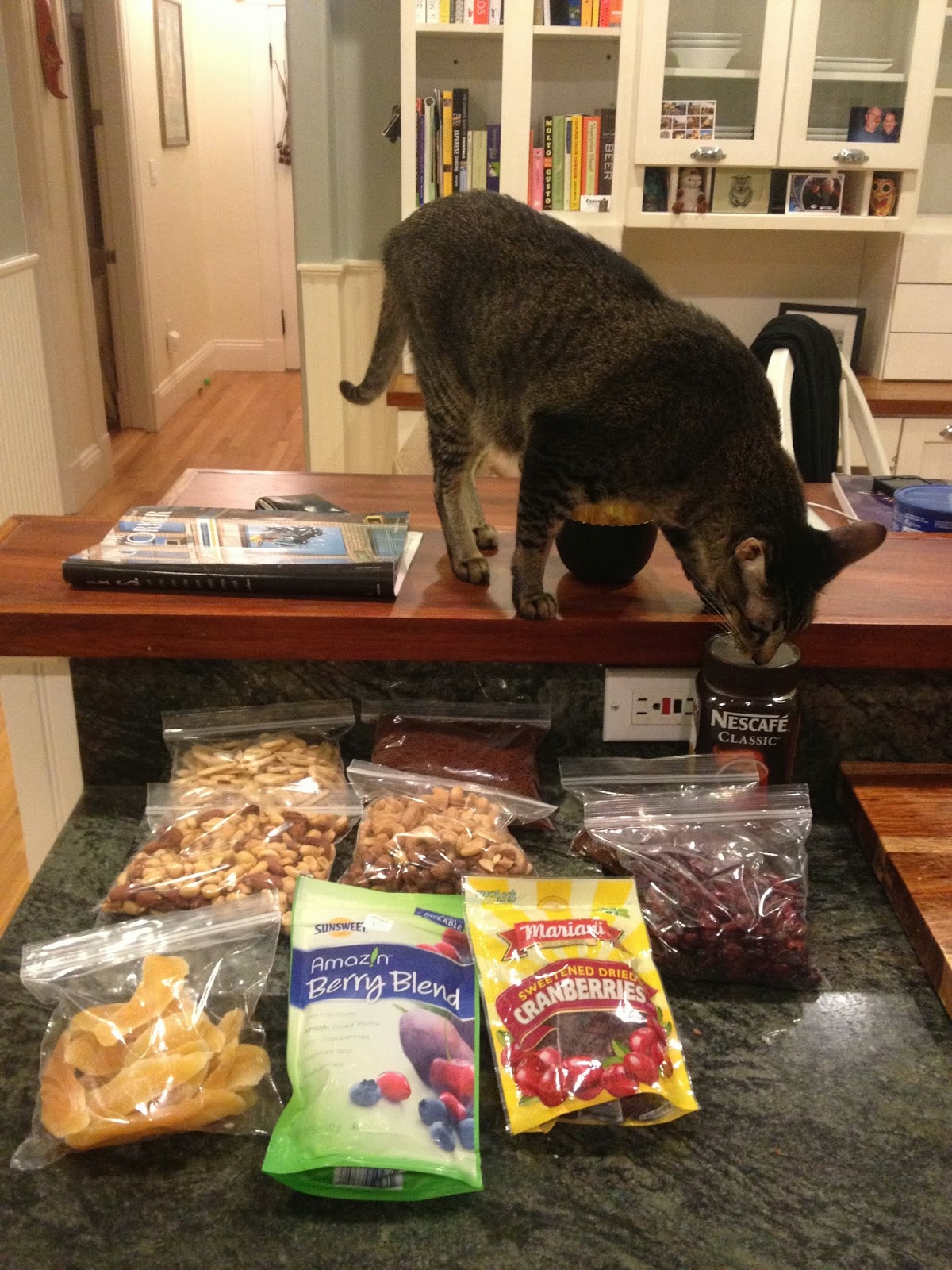 Food for Gambell - cat not included.

As I'm leaving Anchorage I receive word from the island: none of the rarities could be refound this morning. But…there are favorable winds from the west (which I never saw last time - only the dreaded northerlies) - so there's hope for new stuff. The other change in the weather is that when I arrive this time I can actually see Russia… 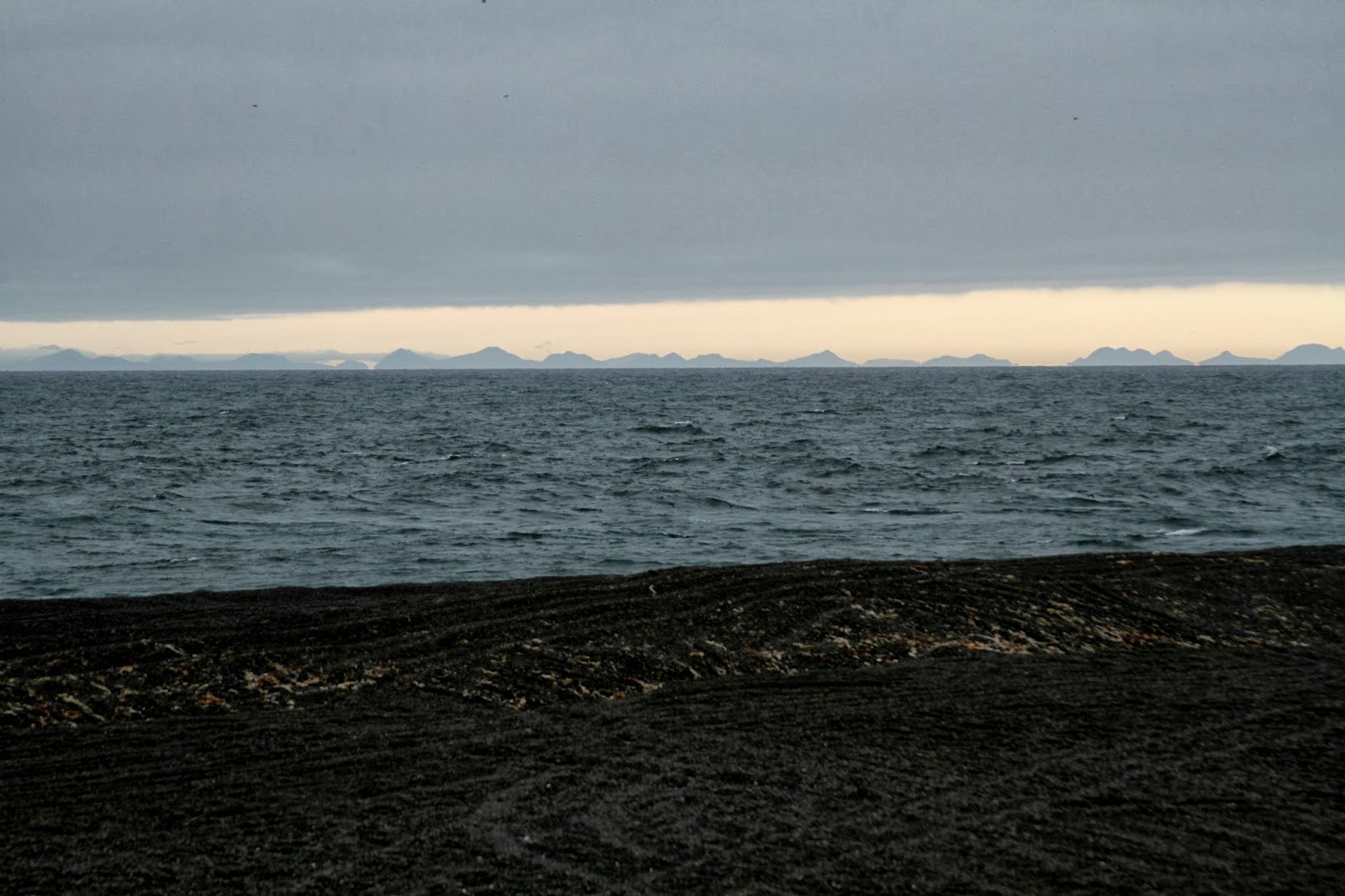 Russia. The forested mountains of the Chukchi peninsula.

The island is much quieter - the Red-throated Pipits have cleared out, and the shorebird numbers are down - only a few Sharp-tailed and Pectoral Sandpipers left. And a lot fewer birders. Norm Budnitz is on his way out on the flight I came in on. James Huntington is still here, as is Jay Lehman and Dave Sonnenborn, as well as Paul Lehman who'll be here until the start of October.

Since there's no "bus" now, I'm catching rides with Clarence - a native who
eschews binoculars for his hawk-like eyes - eyes which have found a good number of birds here, including a Little Bunting in August. 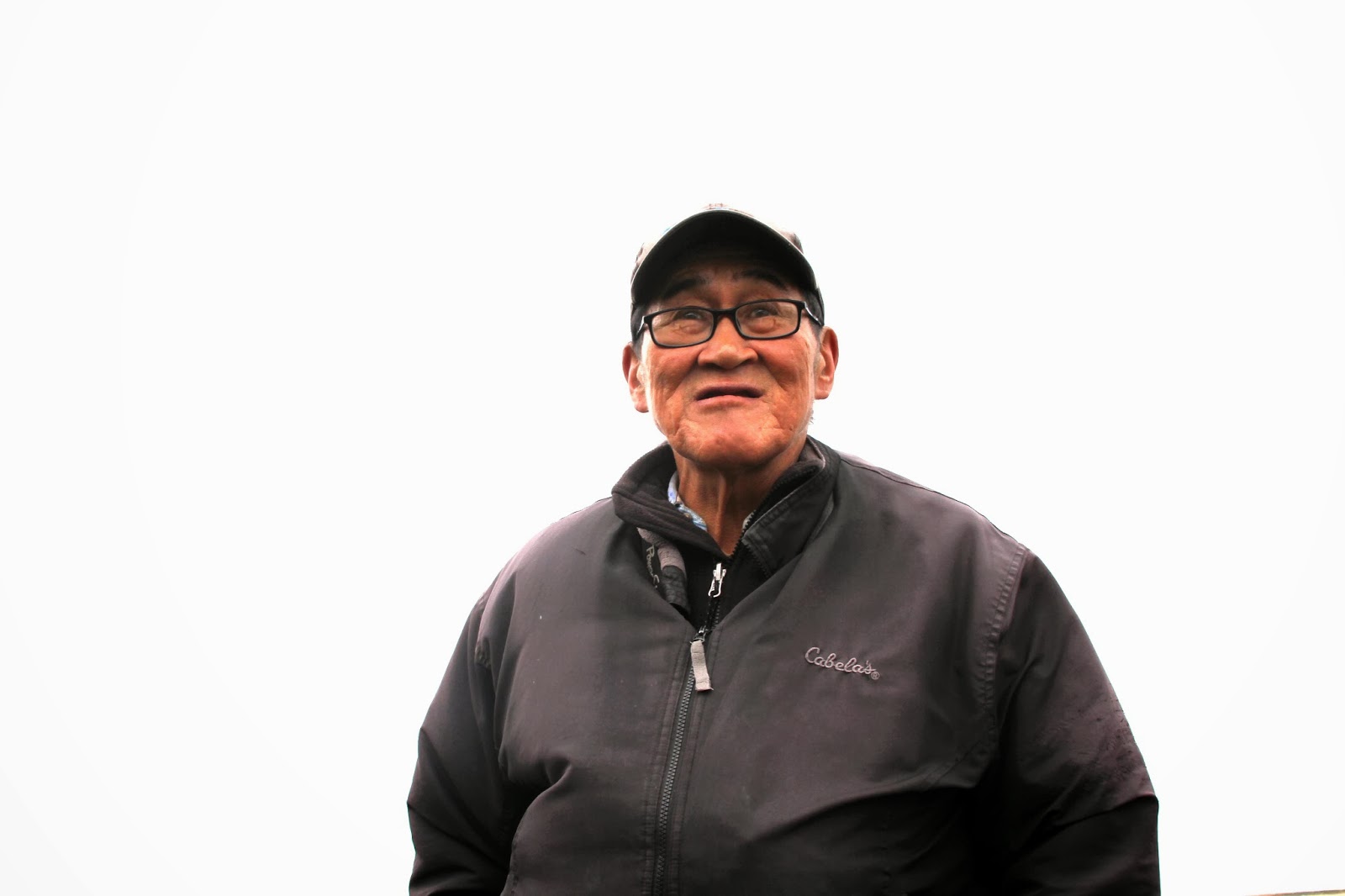 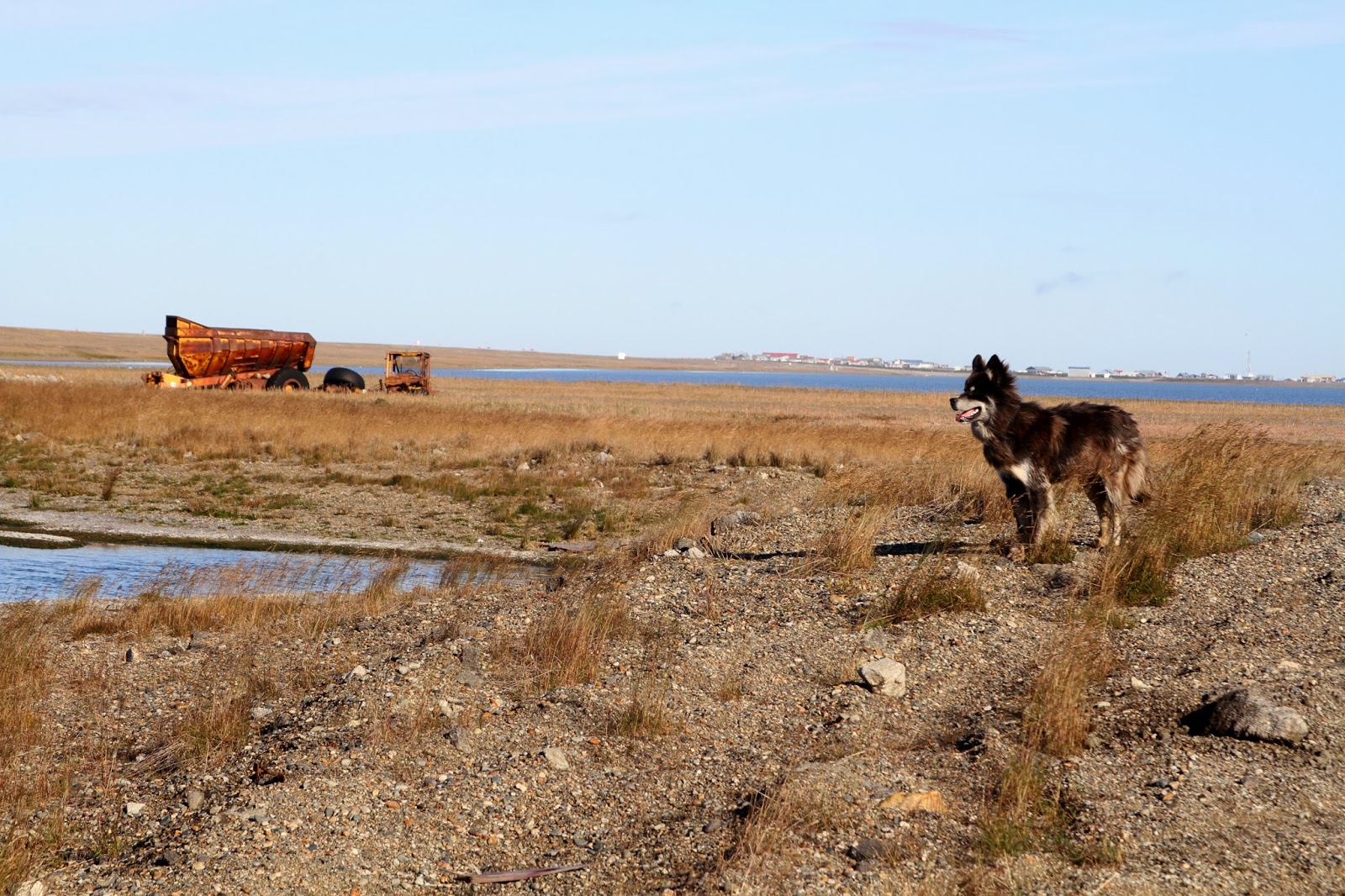 Nando likes to run along next to Clarence's ATV and (playfully?) bite your feet. Biting my feet was not much fun (at least for me) - it resulted in my new Neos boots being torn and thus filling with cold water whenever I wade into any. But what was I supposed to do? Kick the dog in the face to keep him away from my feet? (Yes, after that incident there *was* some dog face-kicking.)

Other animals seen were the Ground Squirrels in the boneyards… 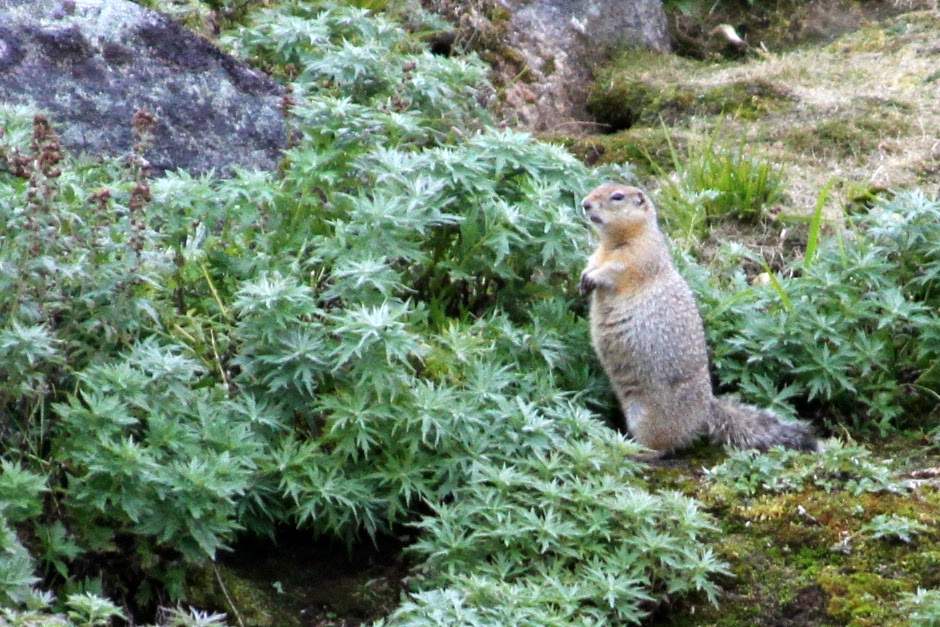 In fact - there are more animals than birds. As one day slips into the next, and we cover the same ground, over and over again, the disappeared birds never return, and the hoped-for ones never arrive. It's my last day here, and I've no new birds to show for an expensive and exhausting trip. I'm jealously reminded of the week John Vanderpoel had here back in 2011, when he saw Dusky Warbler, Stonechat, and Pallas' Bunting (as well as Gray-tailed Tattler, which I ought to have seen by now) - a nice bump to his Big Year.

"Do either of you need Common Snipe?" Jay and I are finishing our packing for the flight this morning - we're leaving in an hour. The crackling radio voice is Paul - and he's doing a quick sweep of the near boneyard. And yes - both of us *do* need Common Snipe!

After unpacking enough to find a hat, boots and a jacket (the gloves will have to wait) I'm out of the door.  Five minutes away, Paul's still in the boneyard - he can't relocate the bird - usually they fly far away, or just a short distance and are refindable. The 3 of us are joined by Clarence (with dogs.) We spread out and walk through the boneyard. Common Snipe would (just about!) make this trip worthwhile - but I can hear the metaphorical clock ticking down to my departure.

My flight time comes and goes, and no plane - or Snipe. It's too foggy to land (the plane, not the snipe.) We head back to the lodge to regroup. Jay's on a slightly later flight - ERA - and we can hear on the radio that it's making an approach. I'm temporarily paralyzed - should I try for Jay's flight? Or stick around for the later Bering Air flight and continue looking for the Snipe? Or spend another week out here with even fewer humans? Or just get a boat to Russia and see the birds the easy way?!

We race out to the runway (there's no airport.) And after the plane lands, and disgorges the few passengers, for the first time this year (or any year) I find myself asking the pilot, "Do you have any seats free?" He does. And with one last, useless glance around for the Snipe, I board the plane. I guess that means I'm done with Gambell for the year. Again.

Paul refound the Snipe later today - just as I suspected he would.

Flying back from Gambell is one of the lowest points this year. Coming to Alaska (again) and taking two flights out here from Anchorage is a big deal. I thought I might miss (some of) the recently resident birds, but could get at least something new. Fall migration here really is protracted - you can be here a week and see nothing, and then one day you can wake up and be rewarded with a beautiful Asian vagrant or two. Sadly, I never woke up to that - just the endless trudging across wet boneyards, and springy pea gravel.

I'm heading home to Boston now, with no plans until the 20th, when I'm on a pelagic from Bodega Bay, CA with Debi Shearwater. With just 1 new bird this month (Sinaloa Wren) I'm hoping the boat will be more productive than Alaska. Otherwise this Big Year will fizzle out in much the same unplanned way that it started...