I'm hoping that being in a place where a movie about birds was filmed will result in me seeing lots of them. Although, since it was a horror movie, maybe I'll only get the evil ones - you know, the ravens, crows, magpies. (And I've never really trusted those Juncos either.)

I'm in Bodega Bay, the back-drop for Hitchcock's movie, The Birds. I'm here for a long weekend of California pelagics, hoping to catch up with Black Storm-petrel, Flesh-footed Shearwater, Murrelets and any petrels. Today's trip is with Debi Shearwater, whose trips are always a lot of fun. She has an uncanny knack for finding the birds in the vast expanse of the offshore Pacific. 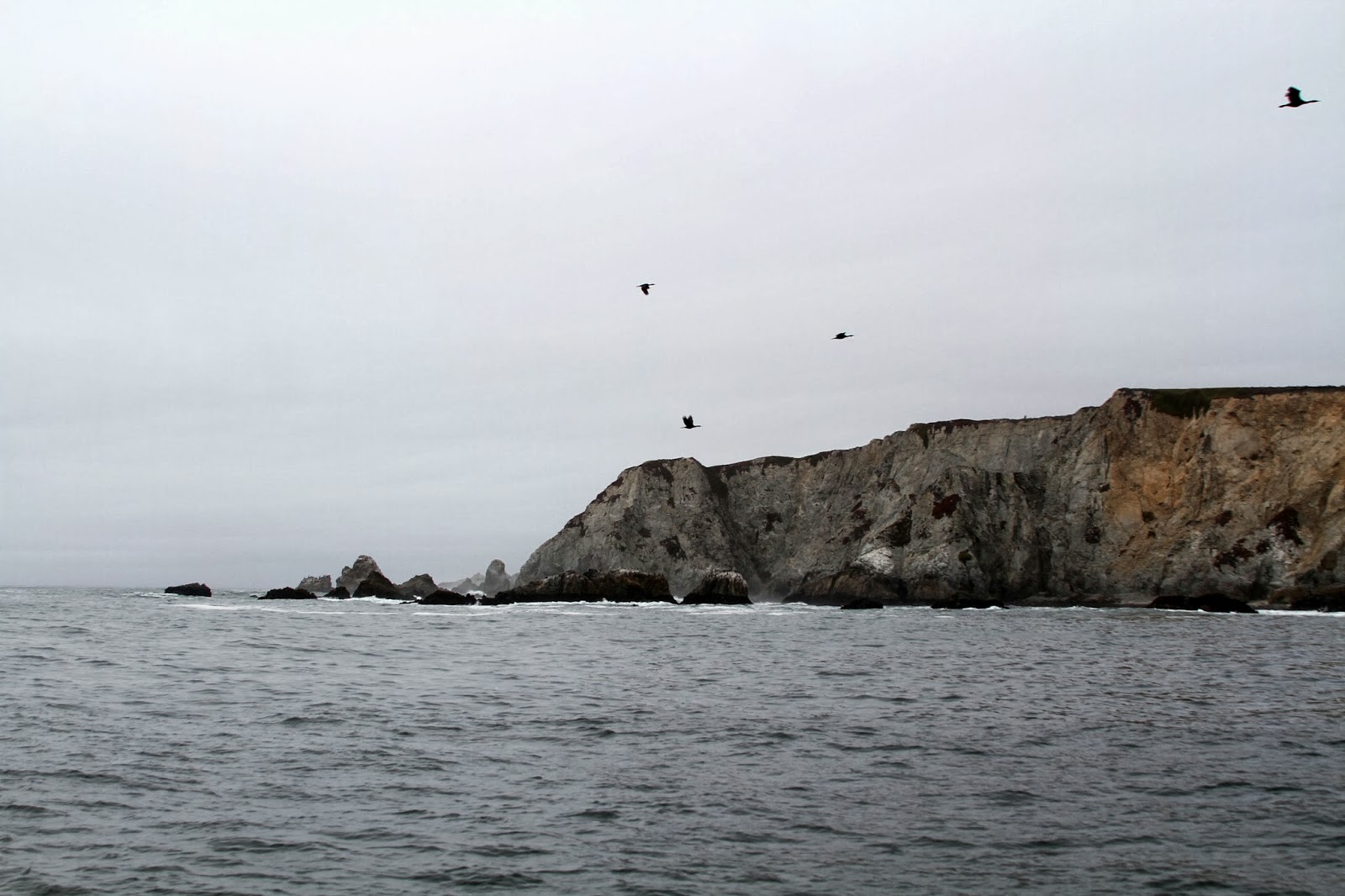 Bodega Bay - home of The Birds.

I'm following my standard pelagic trip protocol: arrive late the night before, "sleep" in car, locate coffee in the morning, stumble onto boat. Sleeping in the car is partly to save money (yeah - Big Years aren't cheap - and I'm getting to the really expensive part of the year now) but mainly to ensure I don't miss the boat. Ever since I almost missed the ferry to the Dry Tortugas I've not trusted myself to wake up in time in a comfy bed, even with multiple alarms. And while I never feel rested, sleeping in a car *does* guarantee that I'll be awake every 15 minutes and be happy to actually "get out of bed." And because this is northern California, it's freezing cold, which means I'm not only awake every 15 mins, but I'm also shivering.

Breakfast is at Roadhouse Coffee. It's a small, homely place, where my Red Sox cap gets me noticed - which seems to happen a lot. People have strong opinions about Boston sports fans. Ever since the Red Sox won two World Series recently we're no longer pitied as the forever-cursed under-dog, but resented. (Having winning basketball, hockey and football teams doesn't help either.) This time though, it's friendly. One of the two customers (it is only 5:30 am) is a local - the father of the Sox second baseman, Dustin Pedroia. Dustin's kind of famous in Boston, which I guess makes his dad's kind of famous too. I'm torn between asking for his autograph, being speechless and starstruck, getting a photo, and telling him what a great guy his son is. In the end, I play it cool - I get my coffee and chat to him about the current season - which is going pretty well.

I'm not sure of which horror movie to be more afraid today - the Birds or The Fly. As we board the boat, our captain alerts us to the many Kelp Flies aboard. "Don't worry, they don't bite. They just tickle." Yeah right - they tickle like spiders on crack! They live on kelp fields out to sea, but if you get too close they ditch the boring kelp and take over the ship. Kind of like Aliens. (Are we done for movie analogies today?) 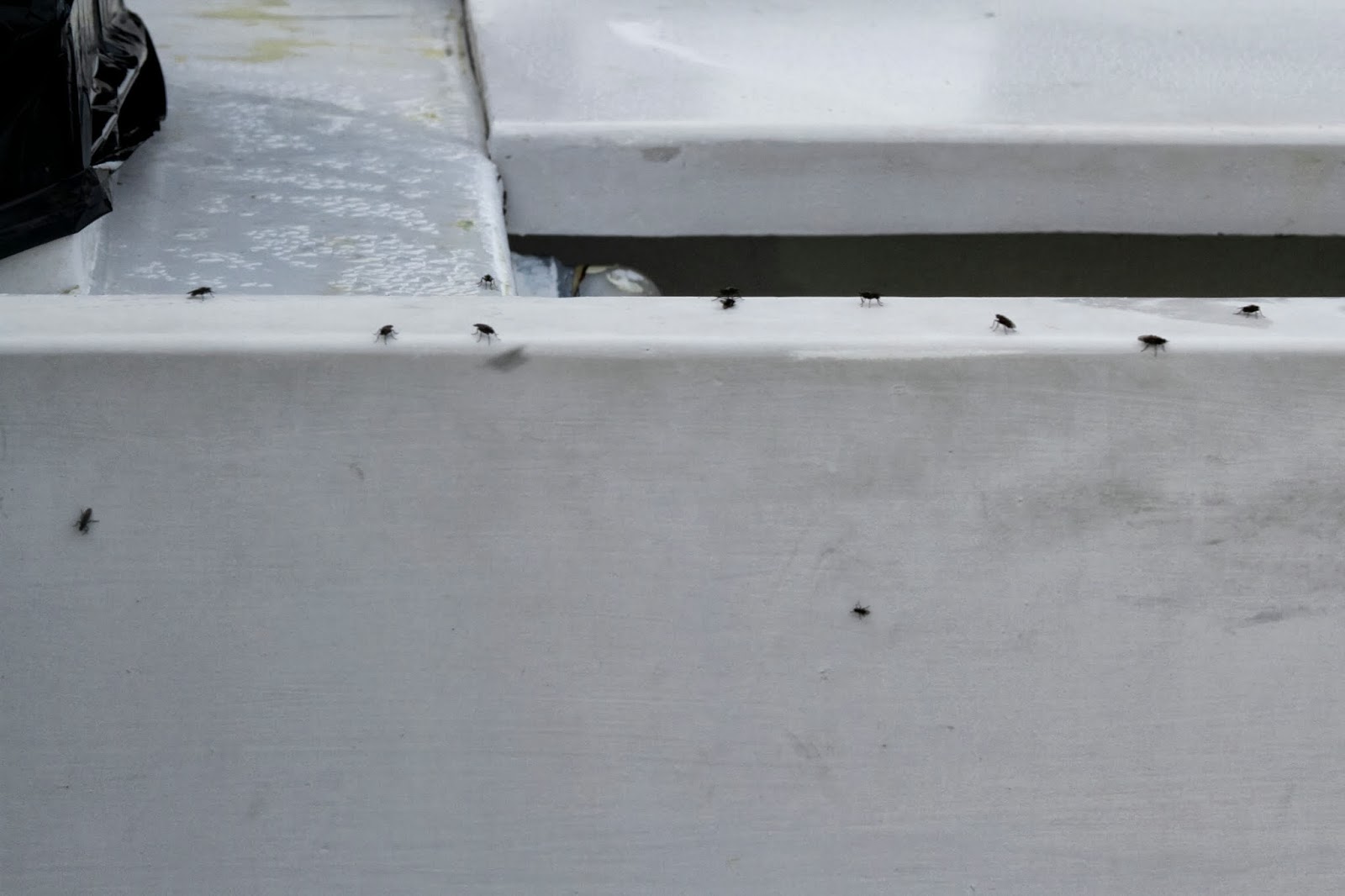 As well as hoping for some good birds, I'm also excited to meet up with Jay again. He's here for the weekend too, and ticking off some CA land birds. His grad school buddy Isaac Sanchez is here too, with his wife. Isaac's doing a photographic Big Year… 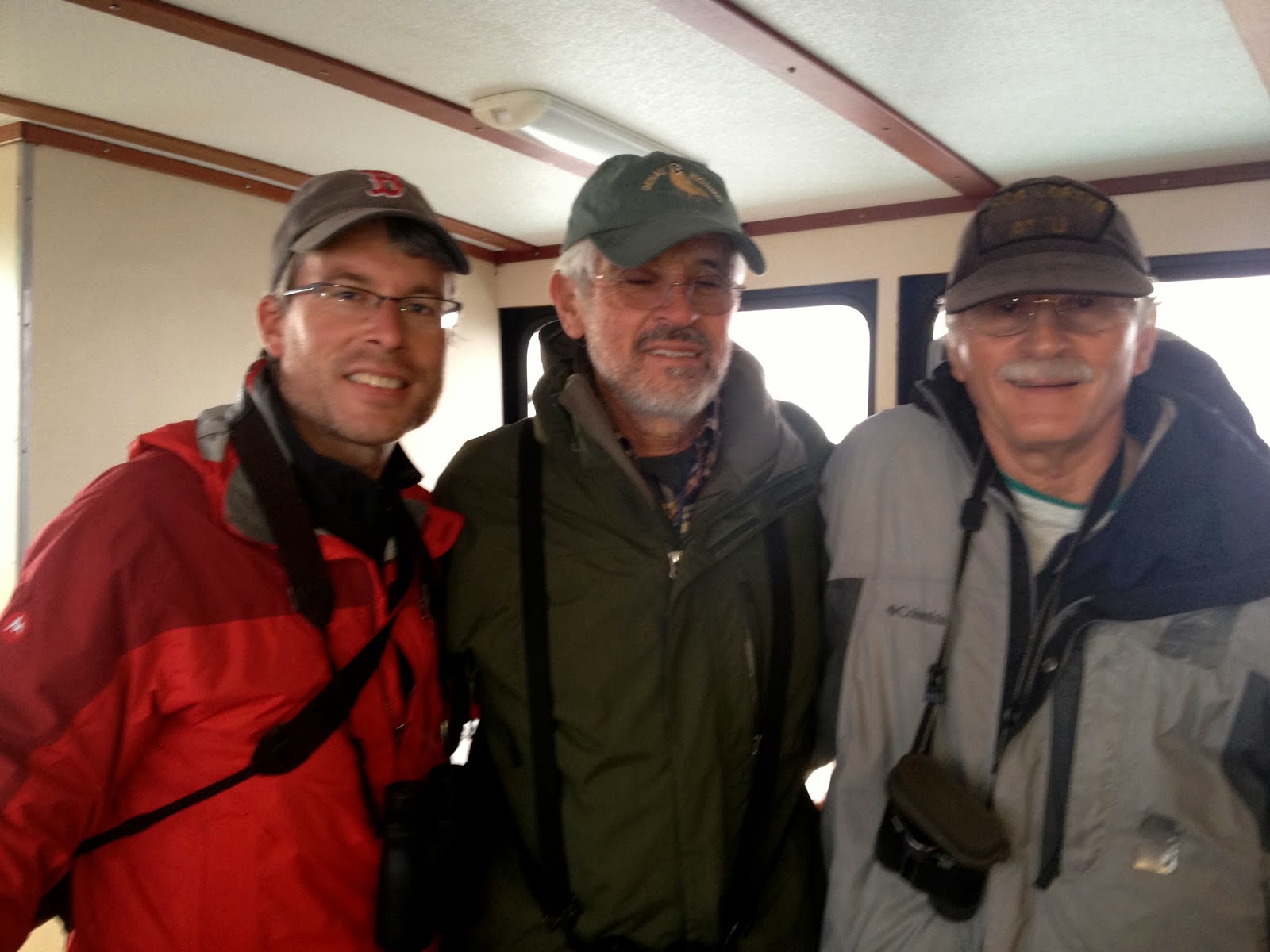 Me, Isaac and Jay.

Appropriate for a day of horror movies, we're socked in by fog as we leave the harbor. Much of the early morning is spent moving between banks of dense fog and tantalizing views of open ocean. As the fog starts to lift, we start seeing birds... 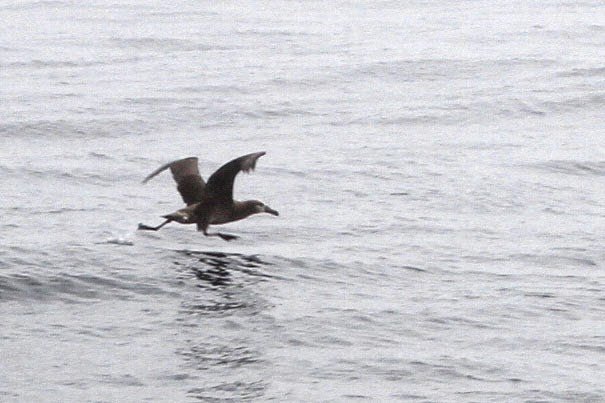 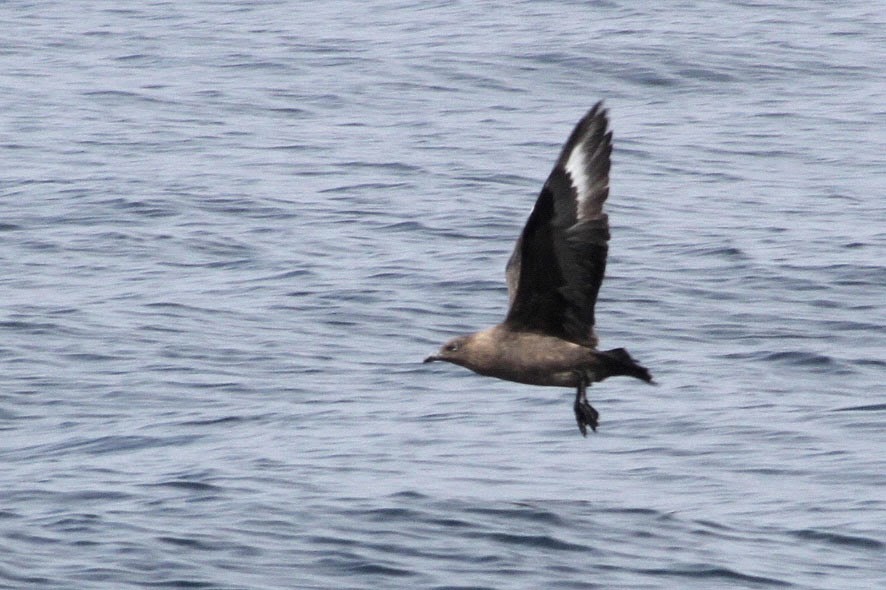 South Polar Skua. We had a Jaeger grand slam today with
Pomarine, Parasitic and Long-tailed. 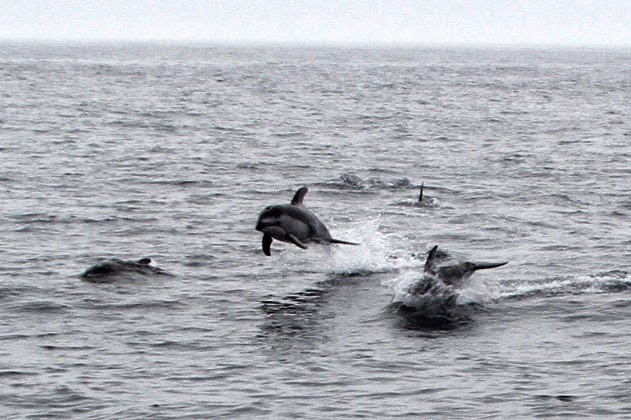 Wait for us! Pacific White-sided Dolphins. 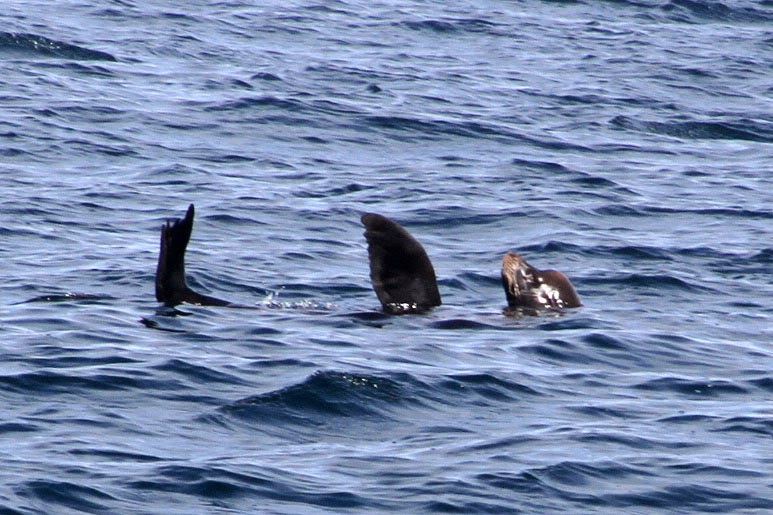 Sea lion relaxing alongside the boat.

As we're drifting into mid-afternoon on the edges of the Cordell Bank, we start seeing single storm-petrels coast by the boat. First there are Ashy… 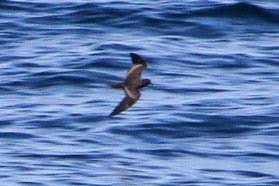 Ashy Storm-petrel. One of the rarest Storm-petrels in the world -
they're only found in this small stretch of NoCal water.

And then Fork-tailed Storm-petrels... 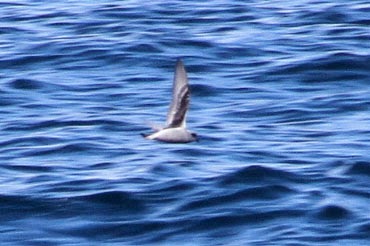 And finally, Black Storm-petrel - a year bird for me... 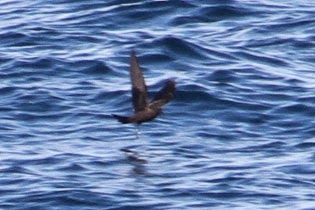 And then the singles start turning into small groups, and then larger groups, which coalesce into even larger groups, and soon the horizon is covered in a dark, swirling mass of Storm-petrels - tens of thousands of birds blackening the water and sky as far as the eye can see.

The Birds! A raft of storm-petrels.

Debi Shearwater and Steve Howell have never seen this number before. Their estimates are: 10,500+ Ashy Storm-petrels (the global population is estimated at 10,000 birds!), 6,500+ Fork-tailed Storm-petrels, 300 Black Storm-petrel and 25 Wilson's. That's over 17,000 birds! Maybe Hitchcock should have taken a boat out here? This probably represents the largest count of storm-petrels ever recorded in North America! It's a truly amazing experience - probably the most birds I've ever seen in one spot, and a once-in-a-lifetime show for even the  most experienced of pelagic birders on board.

At the start of the day, Debi wondered where all the birds would be. With fog, and large areas of cold water, it wasn't obvious where to go. Being surrounded by birds in every direction, I'd say she did pretty well!

After tearing ourselves away from the Storm-petrel spectacle, we return to harbor where we're greeted by an interesting Heerman's Gull... 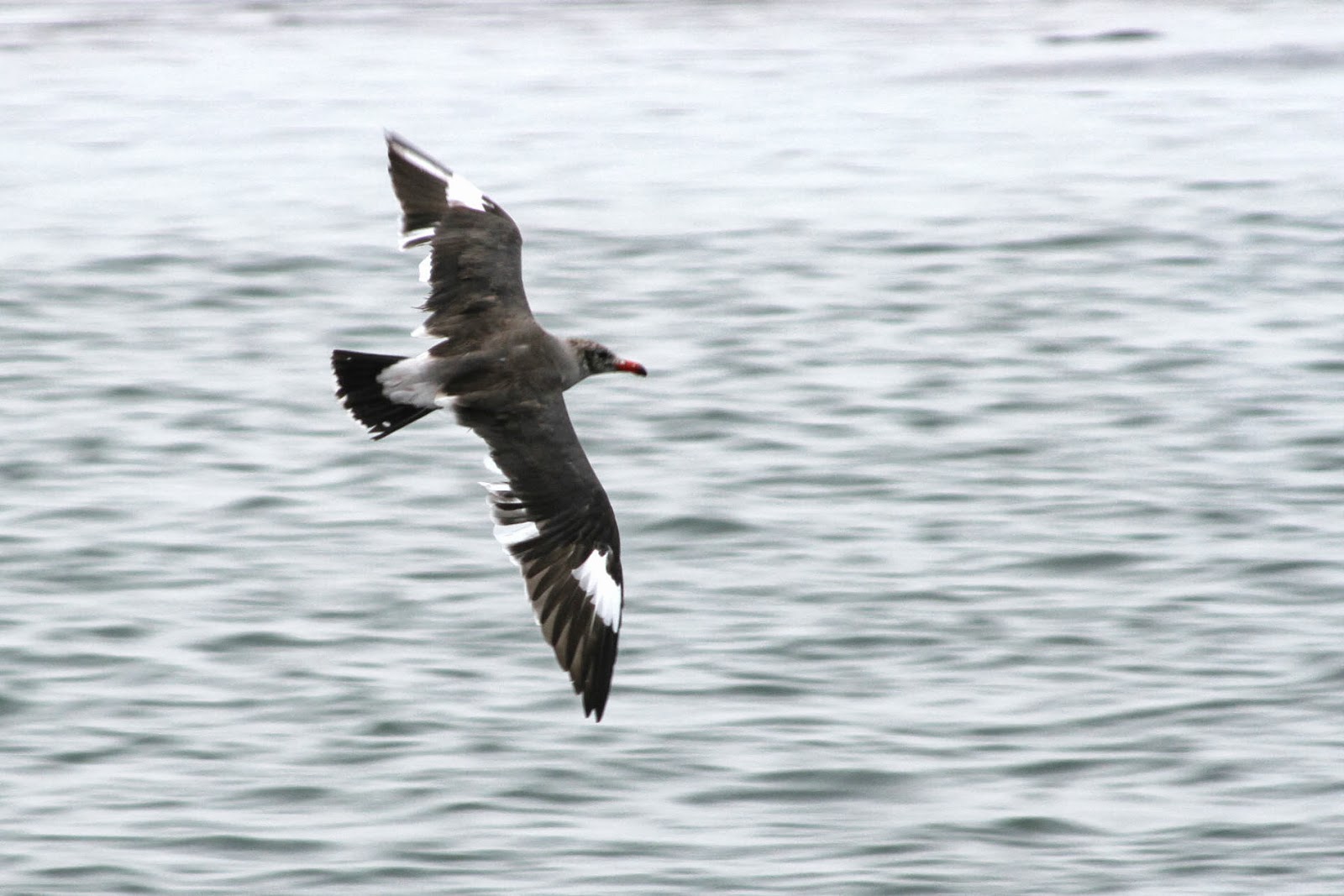 Heerman's Gull. Rare plumage variant with white in the primaries
and secondaries. At a distance, could be mistaken for a Jaeger / Skua.

I've seen a lot this year - new birds, new plumages, as well as some amazing non-avian wildlife. But today was one of the highlights of my year. Thank you Debi! The movie today was definitely a box-office success.

Tomorrow I'm on another boat - in Orange County. After navigating the bay area traffic and getting through Oakland Airport, I fly to LAX, and drive the hour or so south to Dana Point. It's late when I arrive, but at least the sleep won't be cold. And what better way to start my LA trip than a midnight breakfast at Denny's... 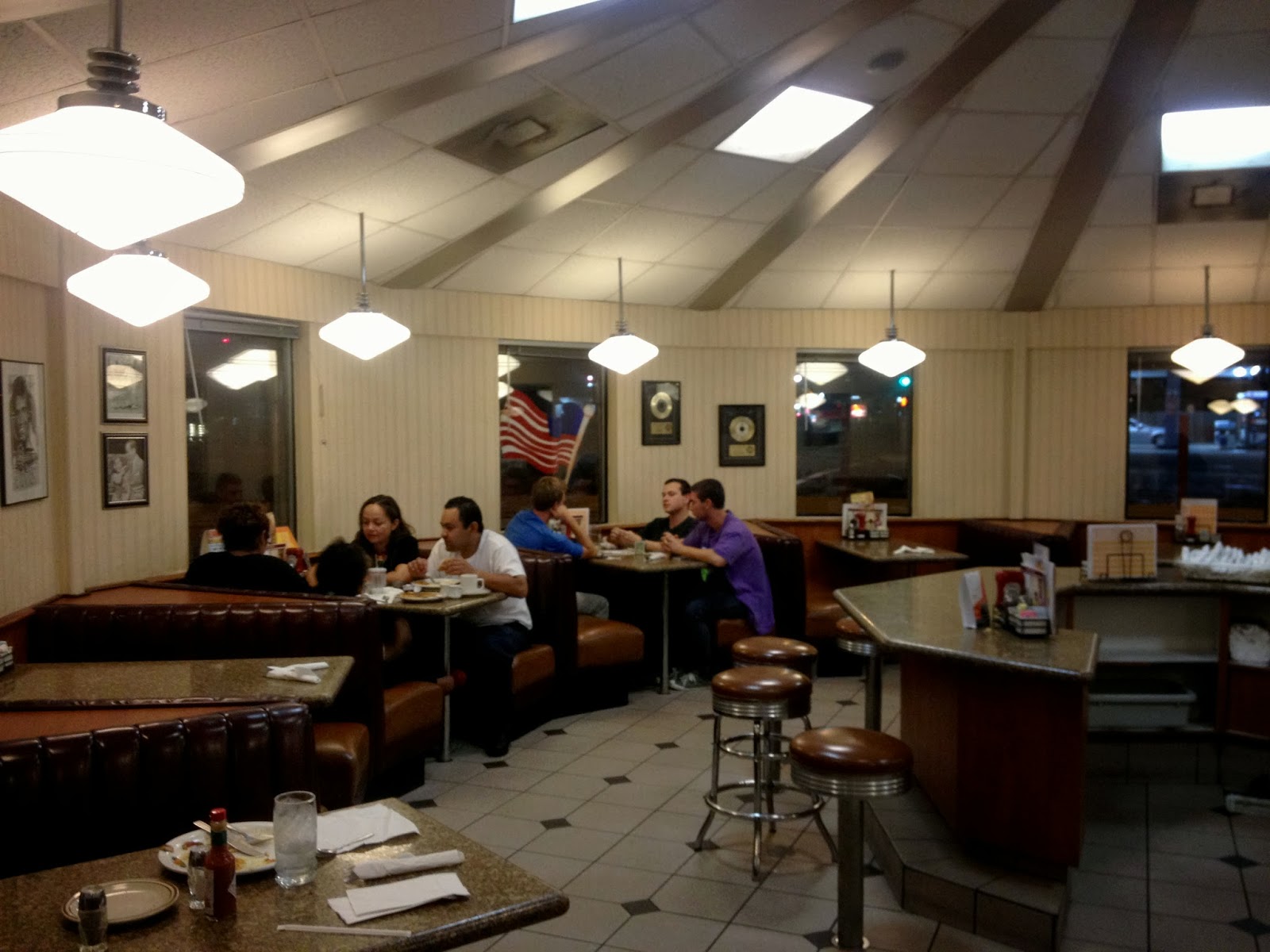