There's only one thing worse than missing a plane, and that's missing a boat. I was thinking this as I was balancing the conflicting needs of not missing said boat, and how much time time I'd lose if I got pulled over for speeding. Regular readers of this blog will know that I'm not a morning person, but this morning at 6:48 I was wide awake and running out the door. Unfortunately, that should have been happening an hour earlier. Maybe I need to start setting a 4th alarm?

Key West is no place to be when you're in a hurry. The main road out there is 45 mph, and the town itself is full of laid-back dudes who have no idea what a Black Noddy is. I ran from the parking lot, onto the boat 15 mins before debarkation. Phew! Since this is my last day in Florida, I simply couldn't have missed this. There's only one boat a day.

I wasn't the only birder on board - a group from Minnesota comprised Lee, Mike and Skyler. Whenever I meet friendly mid-westerners I'm immediately aware of just how unfriendly we are on the east coast. (I think I'm allowed to include myself in that category now - at least based on the unfriendliness!)

The Dry Tortugas are a group of 7 islands some 68 miles to the west of Key West. They were settled as a naval defense - there's an impressive fort that encompasses almost all of the main island - Garden Key. They're dry, not because of the drinking laws, but because of the lack of fresh water. They're the Tortugas, because that's the Spanish for Turtles - the Spanish explorer Ponce de Leon reportedly took over 100 turtles from here (5 species nest on the surrounding keys.) The mighty brick fort (the largest masonry structure in the US), beckoned to us from the horizon, towards the end of our 2.5 hour trip. Apart from some floating turtles, and flying fish, the trip out there was quiet - expect for a possible lone Bridled Tern.

There's a palpable sense of urgency among the birders as we draw near: we only have about 4 hours here. Although it's a tiny place, there's lots to see - not least the 5,000-10,000 bird breeding colony of Sooty Terns and Brown Noddies (the only site in the US where these birds breed.) And amongst those 5,000-odd Noddies is a single Black Noddy. Much of the time here, I fear, will be spent looking for this proverbial needle in a haystack.

As we slow down and approach the harbor, we start seeing Brown Noddies and Sooty Terns until they're all round the boat. Magnificent Frigatebirds, one of the few birds seen on the crossing over, start to become more common - they too have a nesting colony here. No Boobies though, which are usually seen sitting on the channel markers. Masked and Brown Boobies are big targets here - I'm unlikely to get these away from the Tortugas. 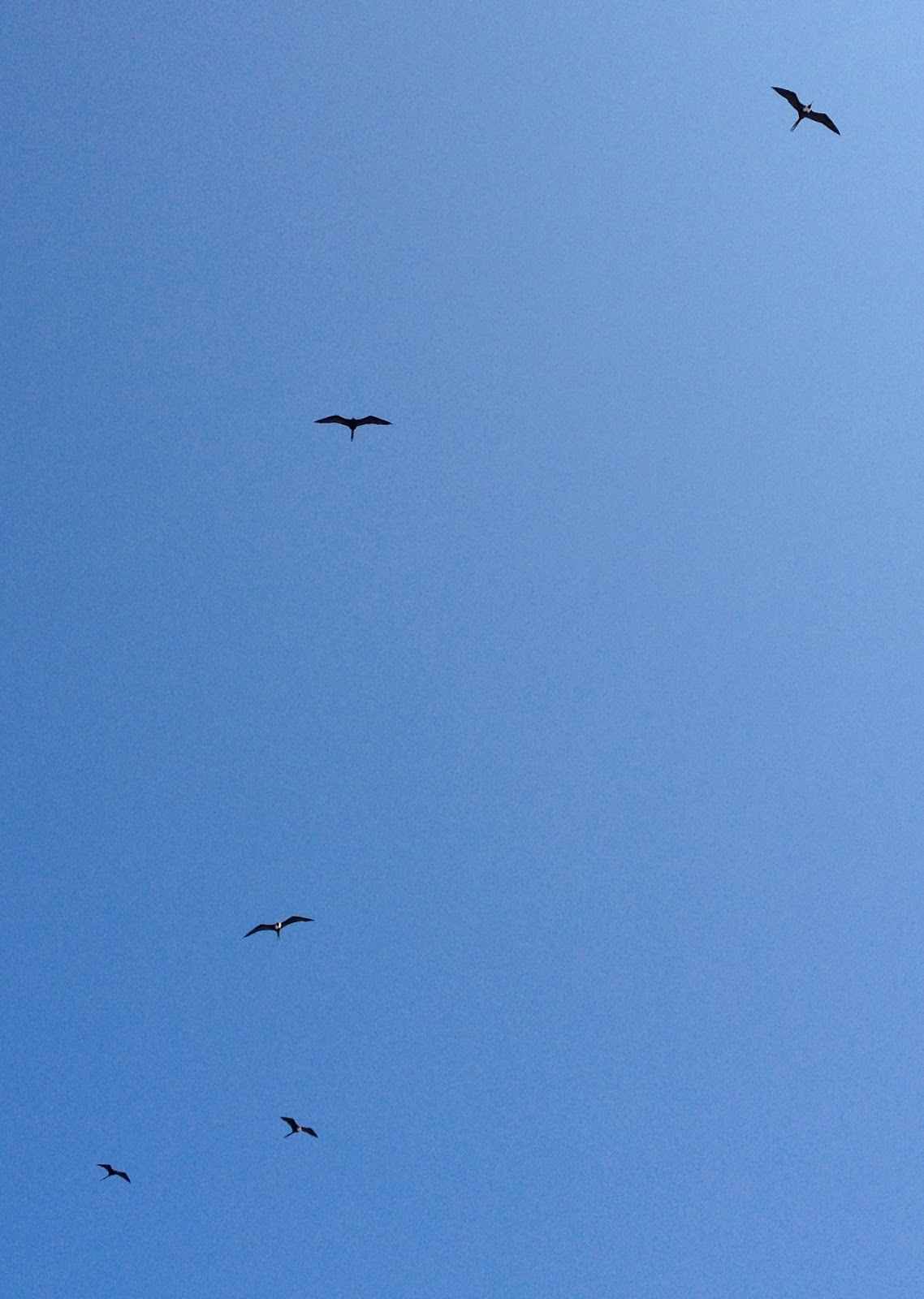 We disembark at 10:30. While the muggles assemble for tours of the fort, snorkeling or just sit on the beach and relax, I made a dash for the fort, while it's still quiet. As I walk into the inner courtyard - a dusty place, littered with surprisingly lush trees - my spider senses immediately start tingling. I'm aware of double digits birds flitting around in the nearest tree. Before I can calm down and start sorting through these, a long-winged bird makes a pass right past my head - a Nighthawk! I focus on this one first! After flushing it a few more times, it settles, and I get my first proper look at an Antillean Nighthawk - in a tree! 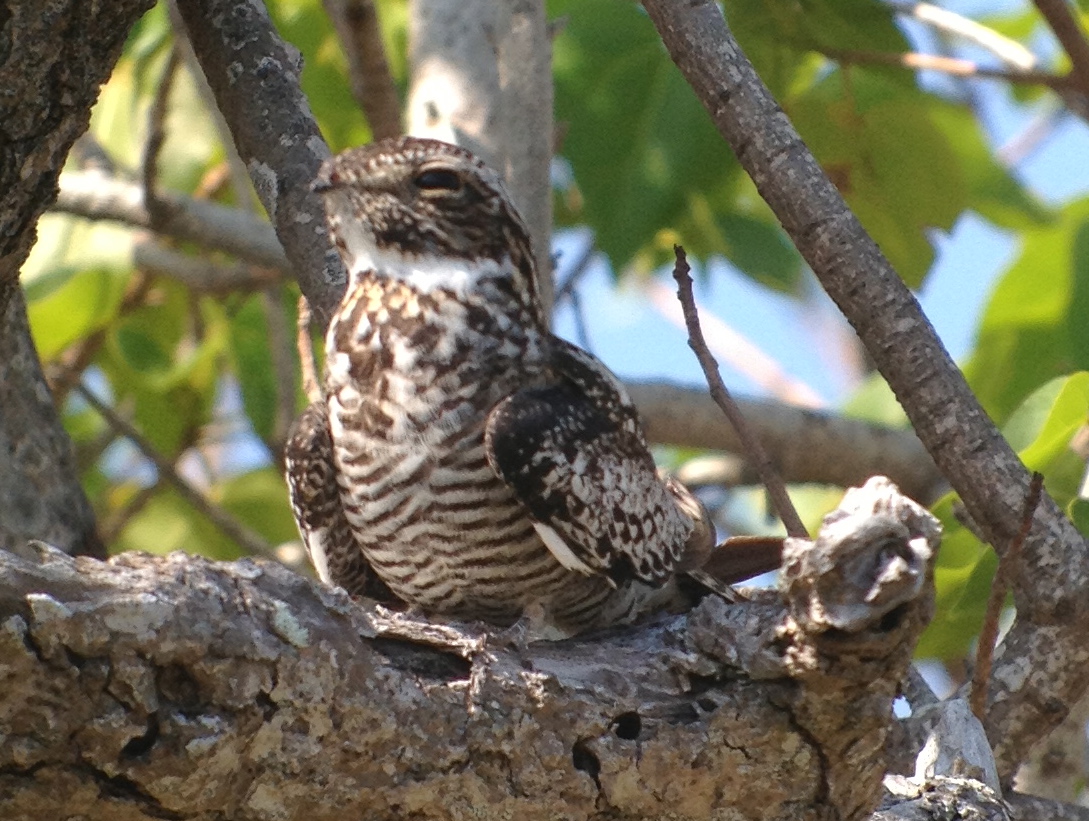 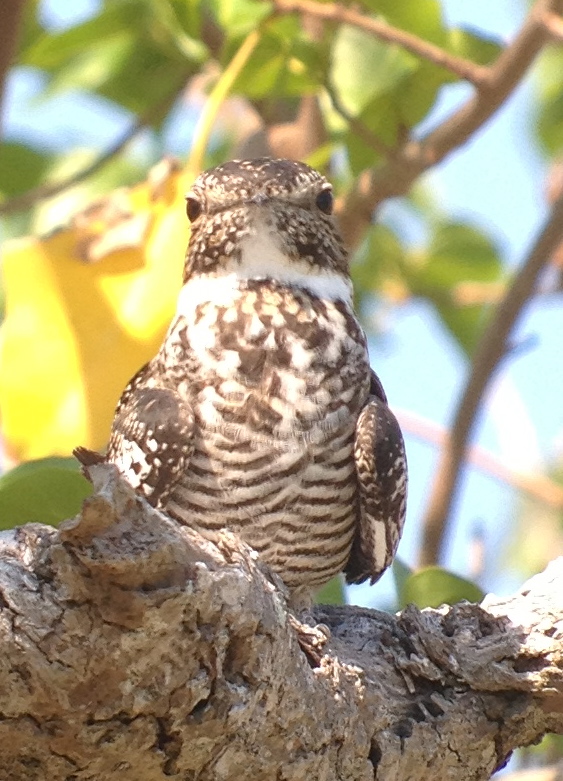 The next 10 minutes is one of the most amazing of my birding experiences this year (or any year.) There are birds everywhere, and the excitement of chasing and identifying is overwhelming. This was my list after those first 10 mins: 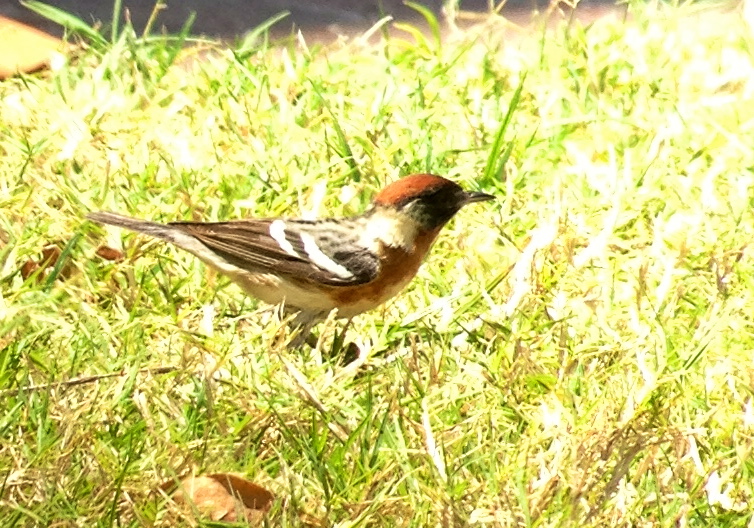 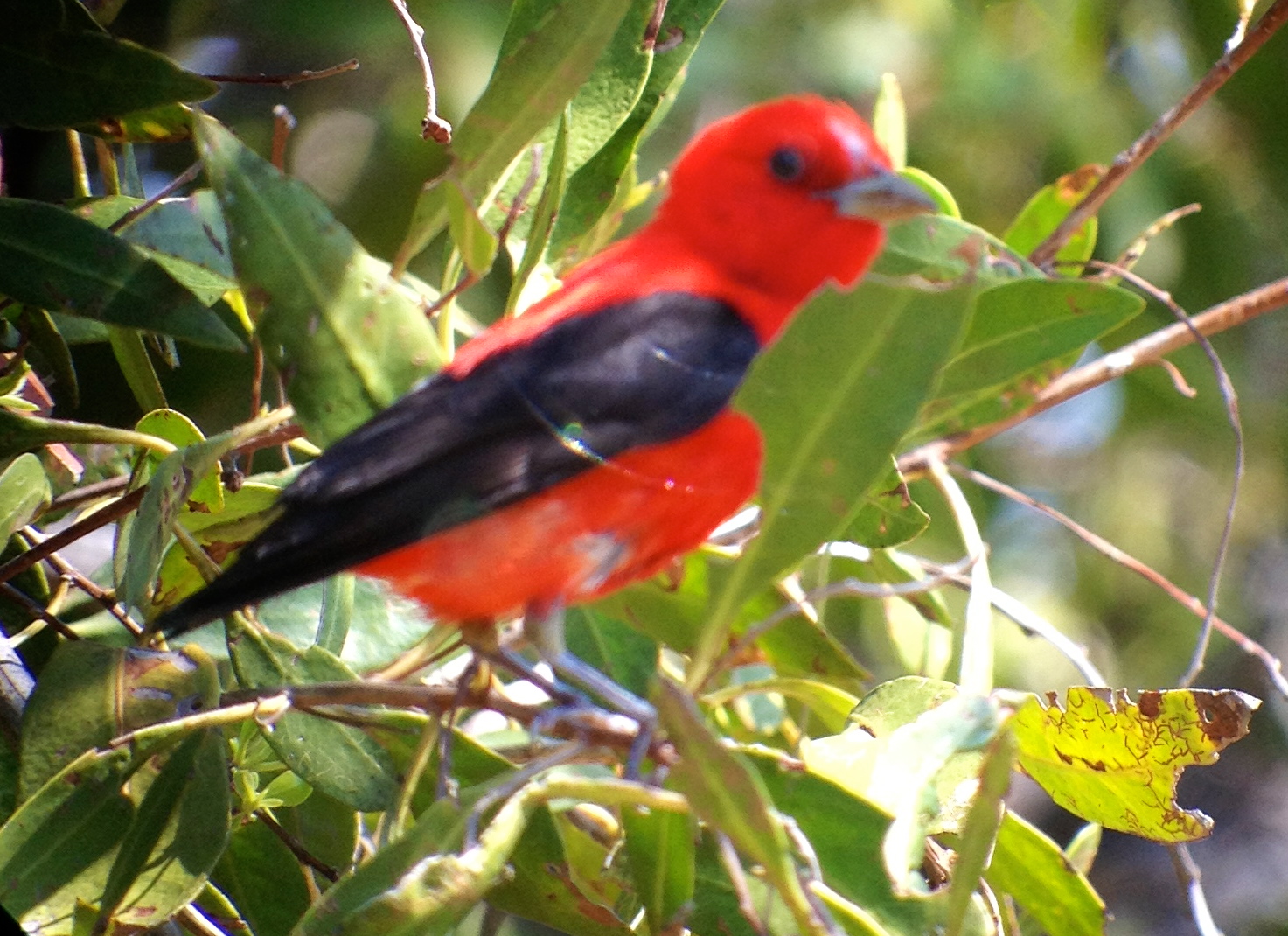 After spending the next half hour enjoying these, and making sure I hadn't missed any - I'm sure there was a Connecticut Warbler hiding in there somewhere! - I headed out to the nesting seabird colony. The Sooty Terns and Brown Noddies nest communally on a short sand spit connected to the fort. 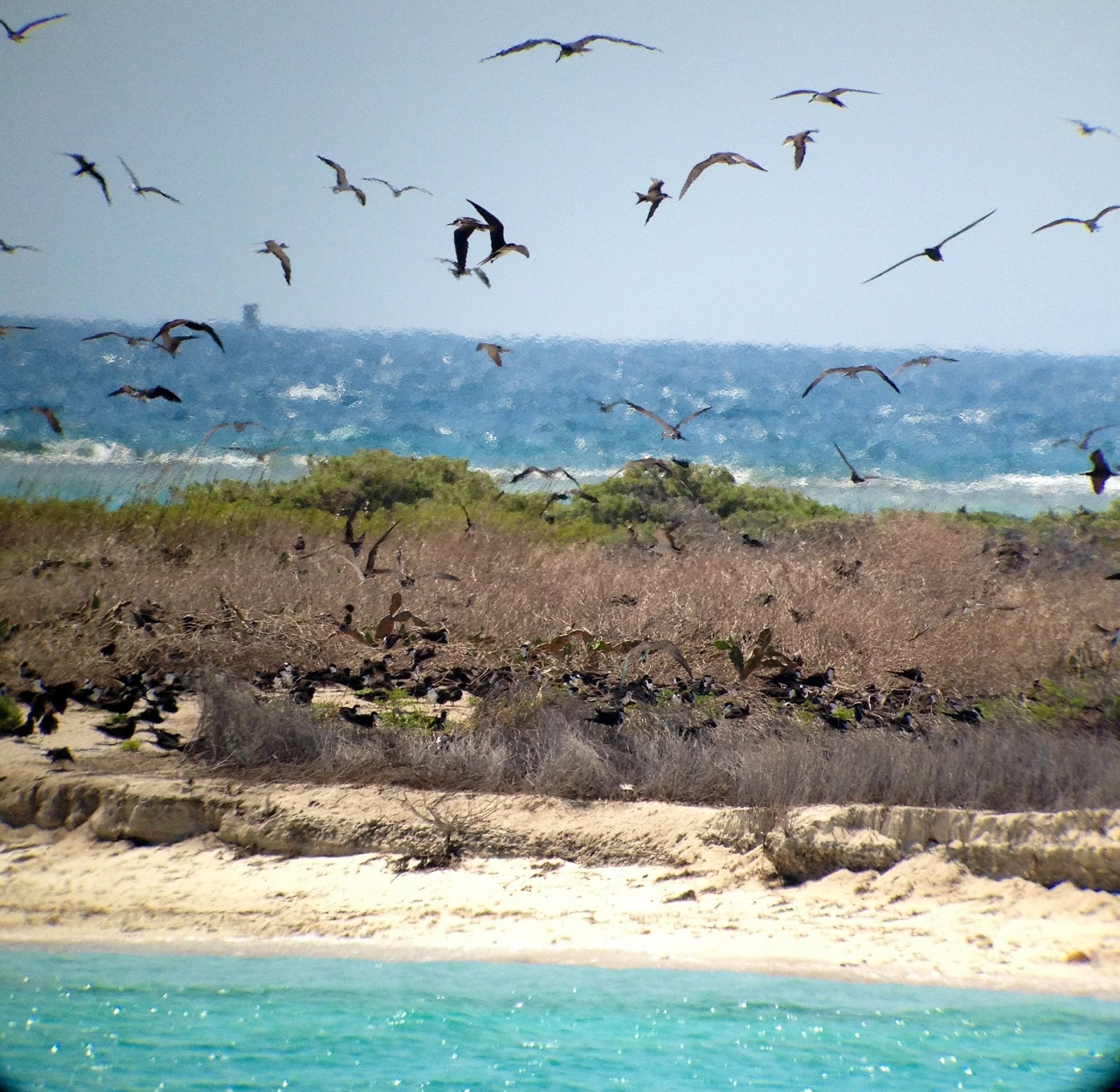 I walked around the side of the fort to get a better view, where I also had some close, resting Noddies… 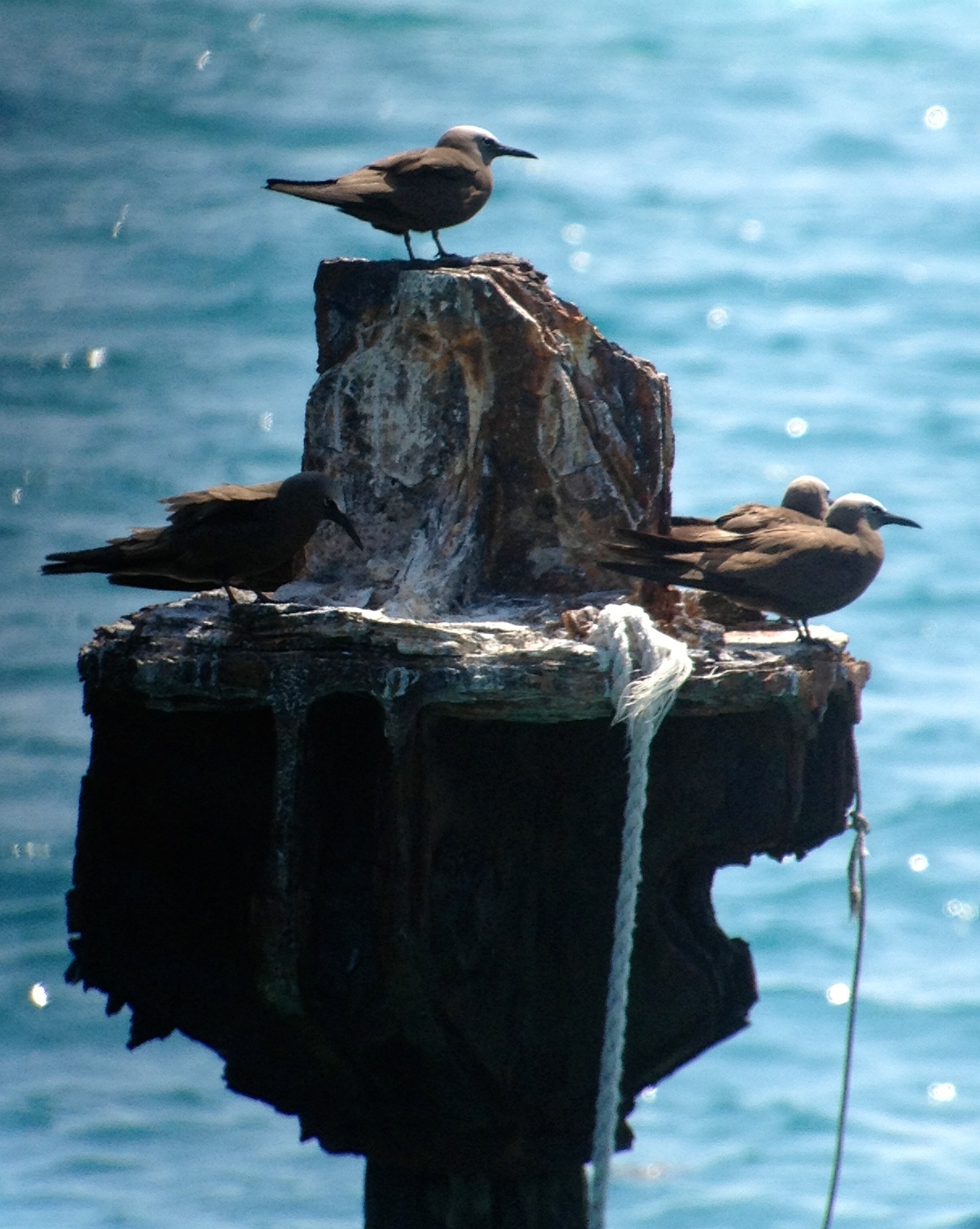 Brown Noddies - gazing out to sea

... as well as a nice mix of shorebirds (White-rumped, Semi-palmated and Spotted Sandpipers, as well as Ruddy Turnstones.) I found a good spot to see the colony, set up my scope and started scanning for Black Noddy. 45 minutes later, and no Black Noddy, I was convinced this was going to be much harder than I'd expected. Although Black Noddies are Black, and the Brown Noddies are, well, brown, that doesn't make them easy to find. Black Noddies are noticeably smaller, with longer, thinner bills. And on immatures the white on the head is strongly delineated.

I went back to the beach, near the boat - where the muggles were having *lunch* (a luxury for which I didn't have time - I was painfully aware of how quickly the departure time was looming and I still had neither Booby (!) nor the elusive Black Noddy.) I scanned from the beach while considering how best to use my remaining time, and spotted a large Gannet flying over the water. The black on the secondaries, forming a panel all along the back of the wing, however, meant this was a Masked Booby! 1 down - 2 to go!

I went back into the fort and climbed to the top, thinking that some elevation might help with the Noddy search. It did, but made me even more anxious as now there were thousands more birds to scan through! Which I did for almost the next 2 hours, with only the Brown Pelicans and Frigatebirds (riding updrafts from the walls) as company. 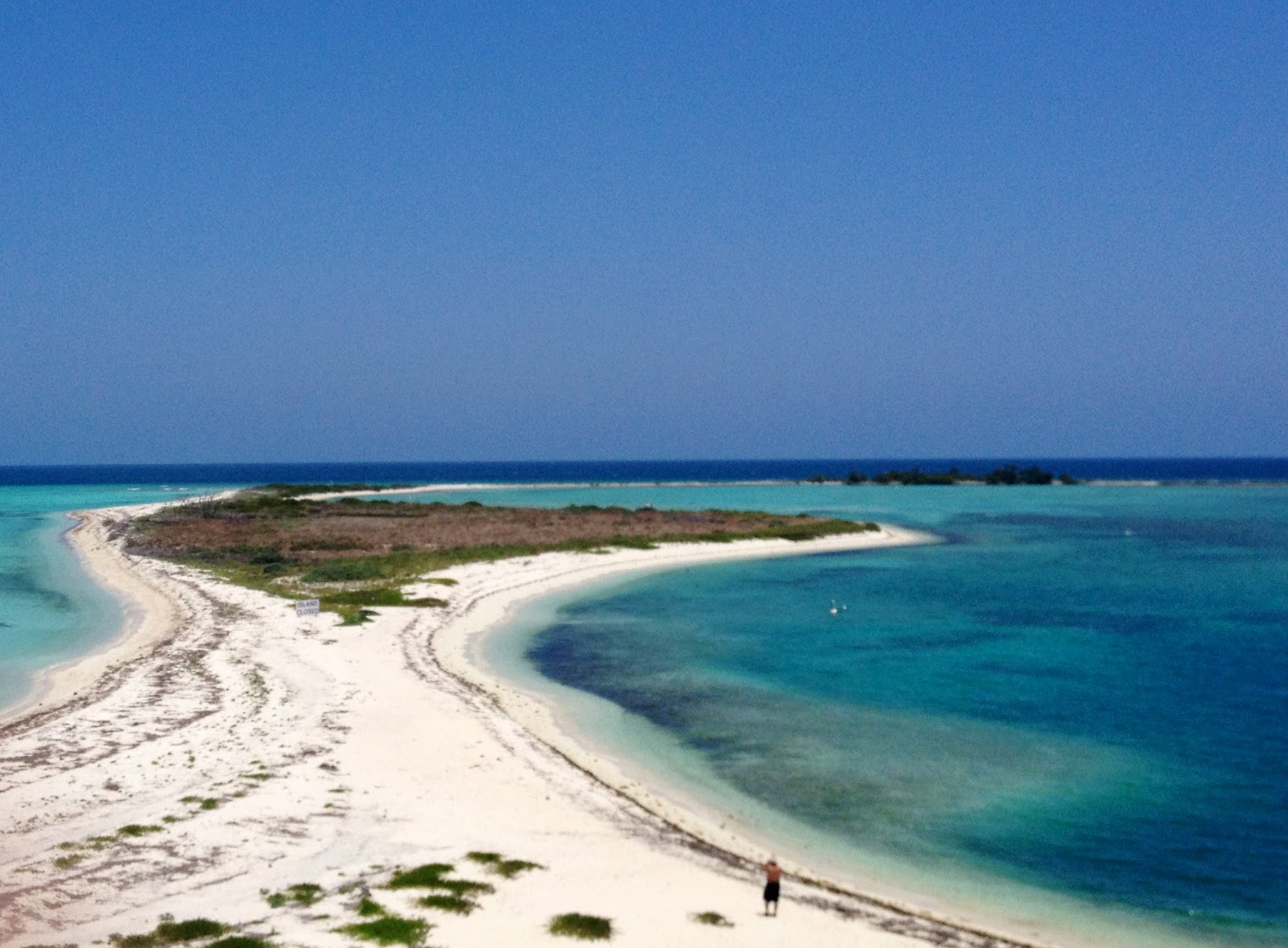 View of the nesting colony from the top of the fort.

Damn. I wasn't coming back, and I'd missed Black Noddy, in the only place where you can find them. It would be a long trip back, and … Wait! What's that? Holy shit - that's a freaking Black Noddy! Small build, black, long, thin bill and very obvious white cap. I checked and double-checked, but there was no doubt in the identification. After a victory dance, to the blissful ignorance of the pelicans and frigatebirds, and after getting a few pics, I went down to the beach to see if I could get a better look (ironically, the bird was one of the closest birds to me - after scanning through hundreds in the far distance.) I found the MN gang, who were very excited to get on the bird. Sharing a good bird really is one of the many joys of birding. 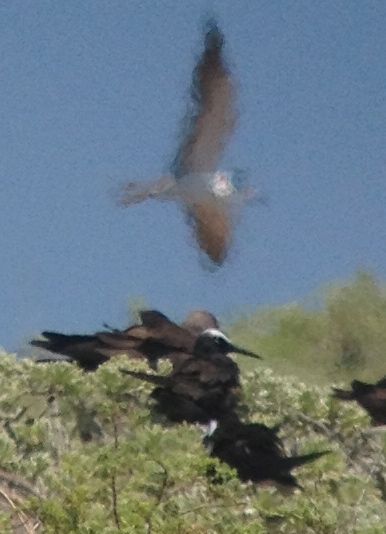 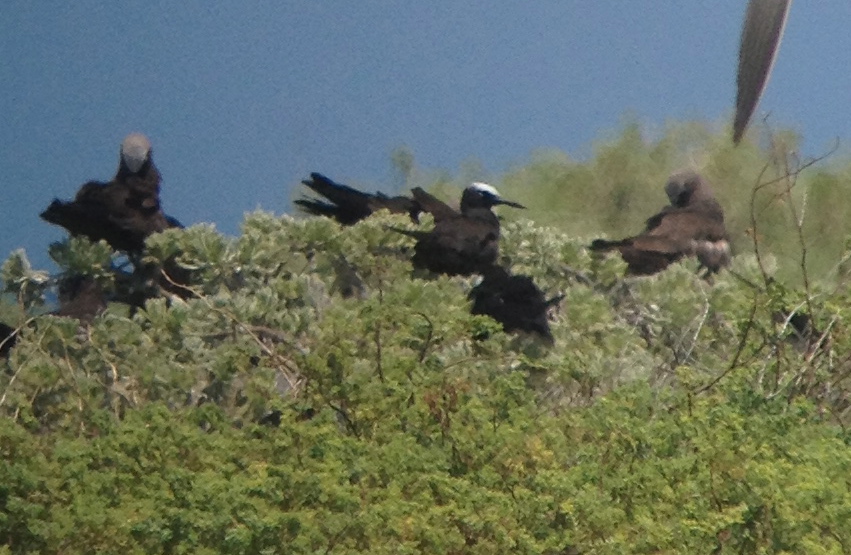 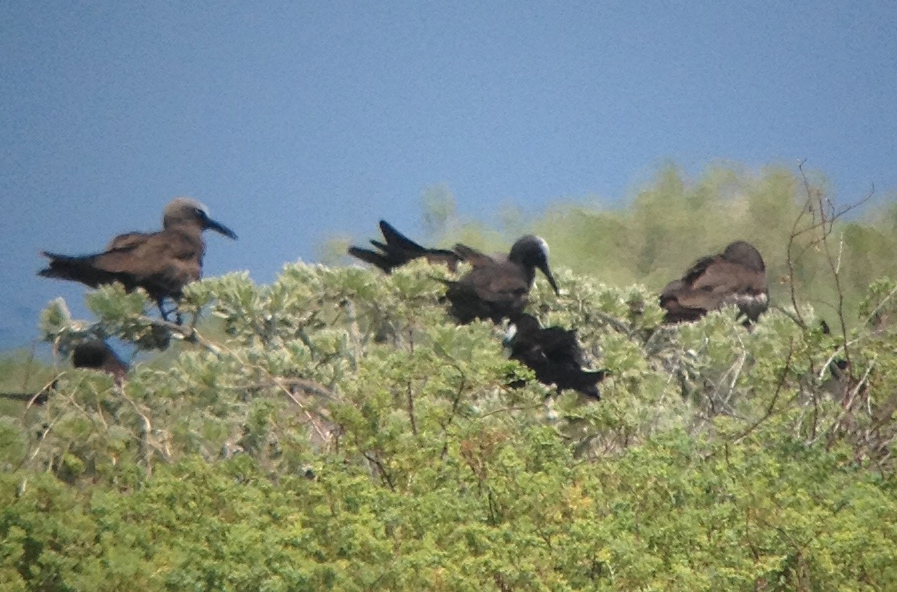 Black Noddy - showing comparison to larger Brown Noddy.
Note the longer, thinner bill (seen best in the lower image), and
the strong demarkation at the edge of the white forehead (suggesting immature.)

The sense of relief and achievement was palpable. I felt like a birding god (admittedly, among a fairly large pantheon of birding gods, who'd also found this bird in the preceding weeks) and took a final walk around the fort before the boat was due to take us back. Scanning the channel markers I spotted a juvenile Brown Booby resting on one - perfect timing! Following up on a tip from Skyler and Mike, I also found a small group of roosting Roseate Terns.

The trip back was uneventful. The wind was too strong, the sun too bright, and my energy levels too depleted for me to stand outside looking for seabirds. Inside, they were showing the movie The Big Year, to a (surprisingly) appreciative audience - and one that was blissfully unaware that there was one among them who was attempting such a feat.

Today was one of the best birding days this year - and maybe for many years. The excitement and potential of being suddenly surrounded by lots of as yet unidentified migrants - many probably just arrived - was thrilling. And the hours of careful scanning, and being able to share the result with the MN birders, was very rewarding.

We returned to Key West at 5:30pm. I spent a quick hour at Fort Zachary Taylor hoping my luck would extend to a Connecticut Warbler (which was seen that morning) - it didn't. The long drive back to Fort Lauderdale for my 6:30am flight the next day (to Texas) was punctuated with a visit to Starbucks and, what could become the inspiration for another blog theme… 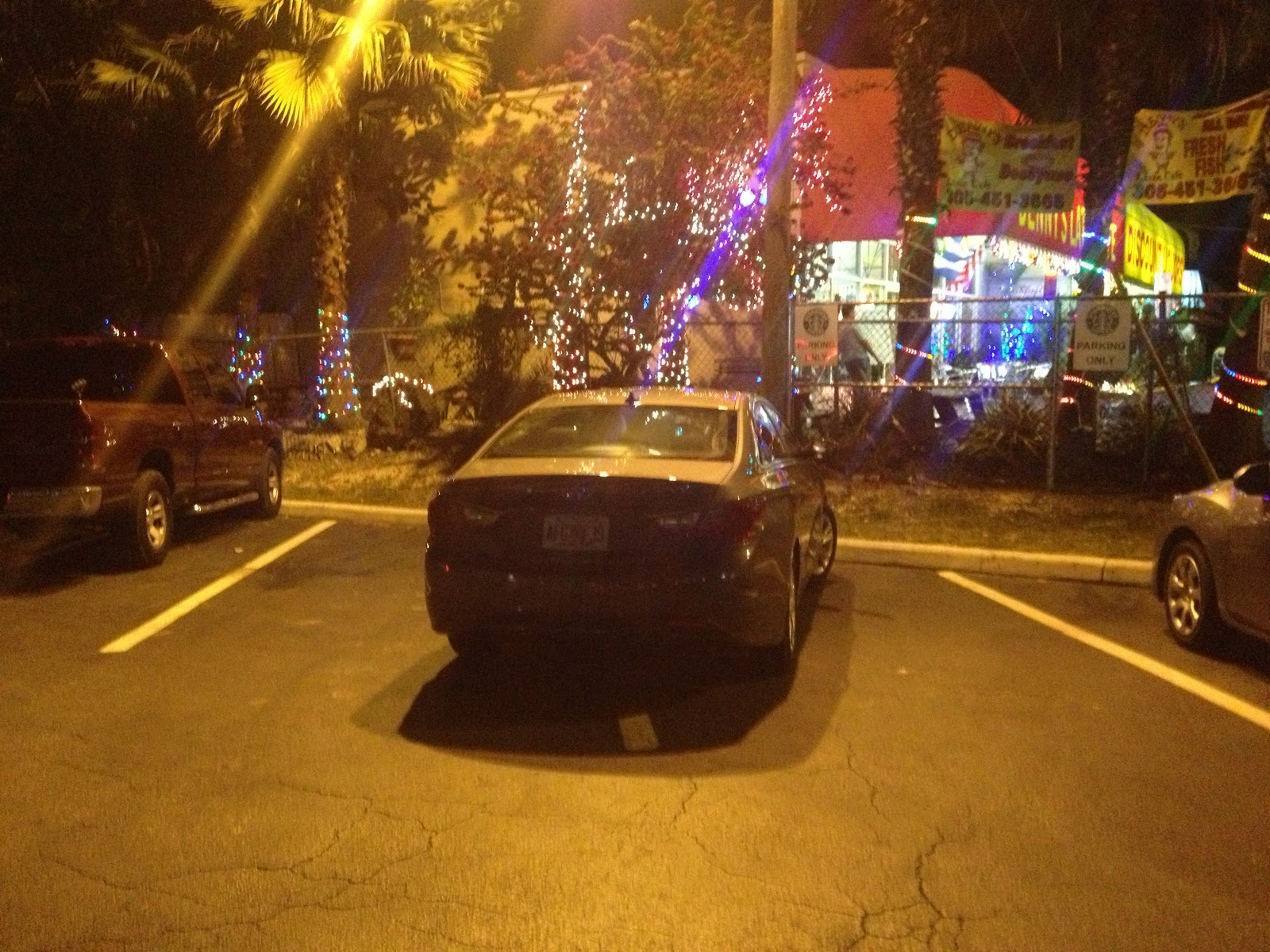 An awesome day of birding - neither marred by the Connecticut Warbler miss, nor the ant that spent the entire drive back on the inside of my windshield, forever threatening to fall off into my lap.