At over 1,200 sq mi, Big Bend is one of the largest state parks in the US - bigger than the State of Rhode Island (which always seems to be the benchmark for "big" things in the US) - and the largest tract of native Chihuahuan desert in the US. Nestled along the Rio Grande in remote West Texas, it's also one of the least visited. For birders, its famous as the only site in the US to see the rare Colima Warbler. Yes - another picky bird that seems to deliberately restrict itself to an inaccessible place! Oh - and based on all the signs there - it's also a good place to see Mountain Lions and Bears (the suggestions for both are the same: never hike alone. D'oh!)

I left Alpine at sunrise. Although one of the closet towns to Big Bend, Alpine is still at least 100 miles from the Chisos Mountains. The trailhead starts in a natural basin, surrounded on all sides by steep rock formations. 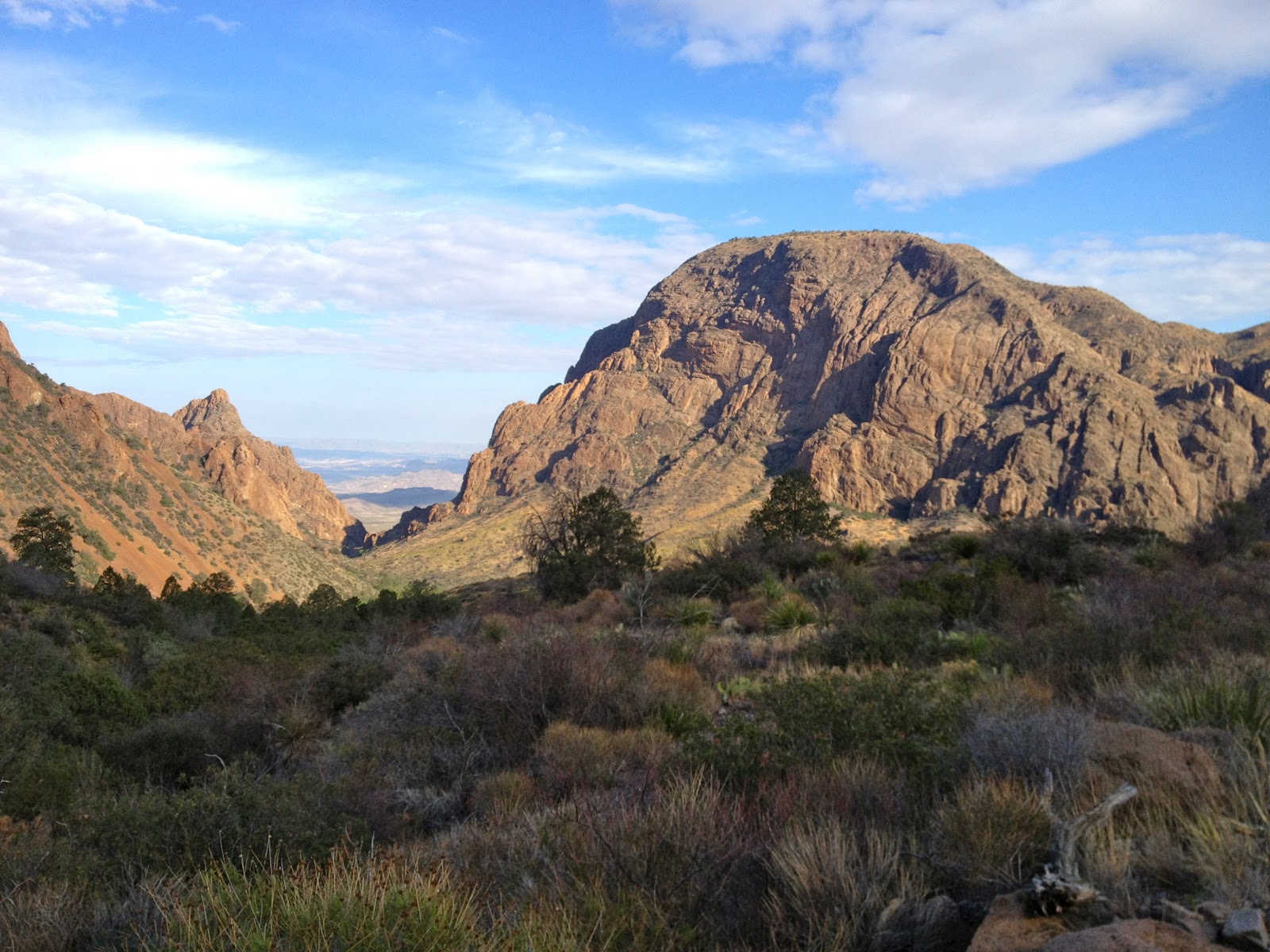 It's a grueling 90 min hike up the side towards the rim. This is the Pinnacles Trail - named after the jagged rocks towering over the edge... 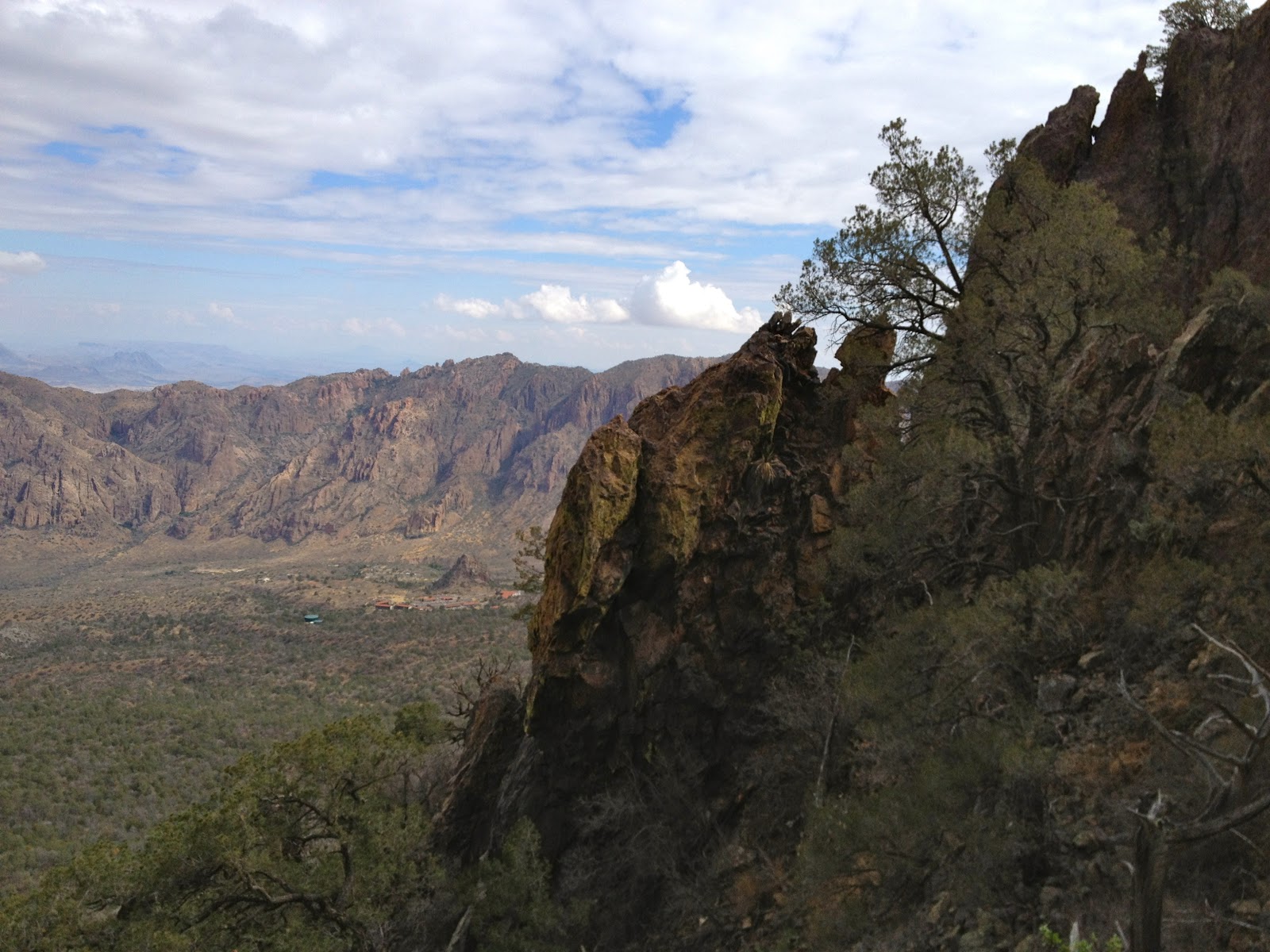 Near the top of the Pinnacles Trail

I'd spent most of the hike listening for the song of the Colima - a rather sweet trill that descends at the end. And just under the Pinnacles, (and over my asthmatic breathing!), I started to hear it. I had one bird  perched on a branch just above me, persistently singing. I didn't bring my scope (happily - it was exhausting enough just carrying myself up) - but here's a record shot with my phone through my binoculars... 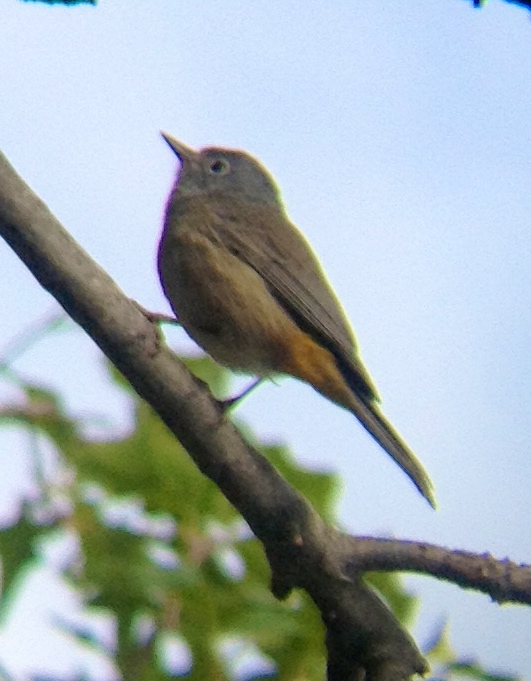 Here's the spectacular view at the top of the basin... 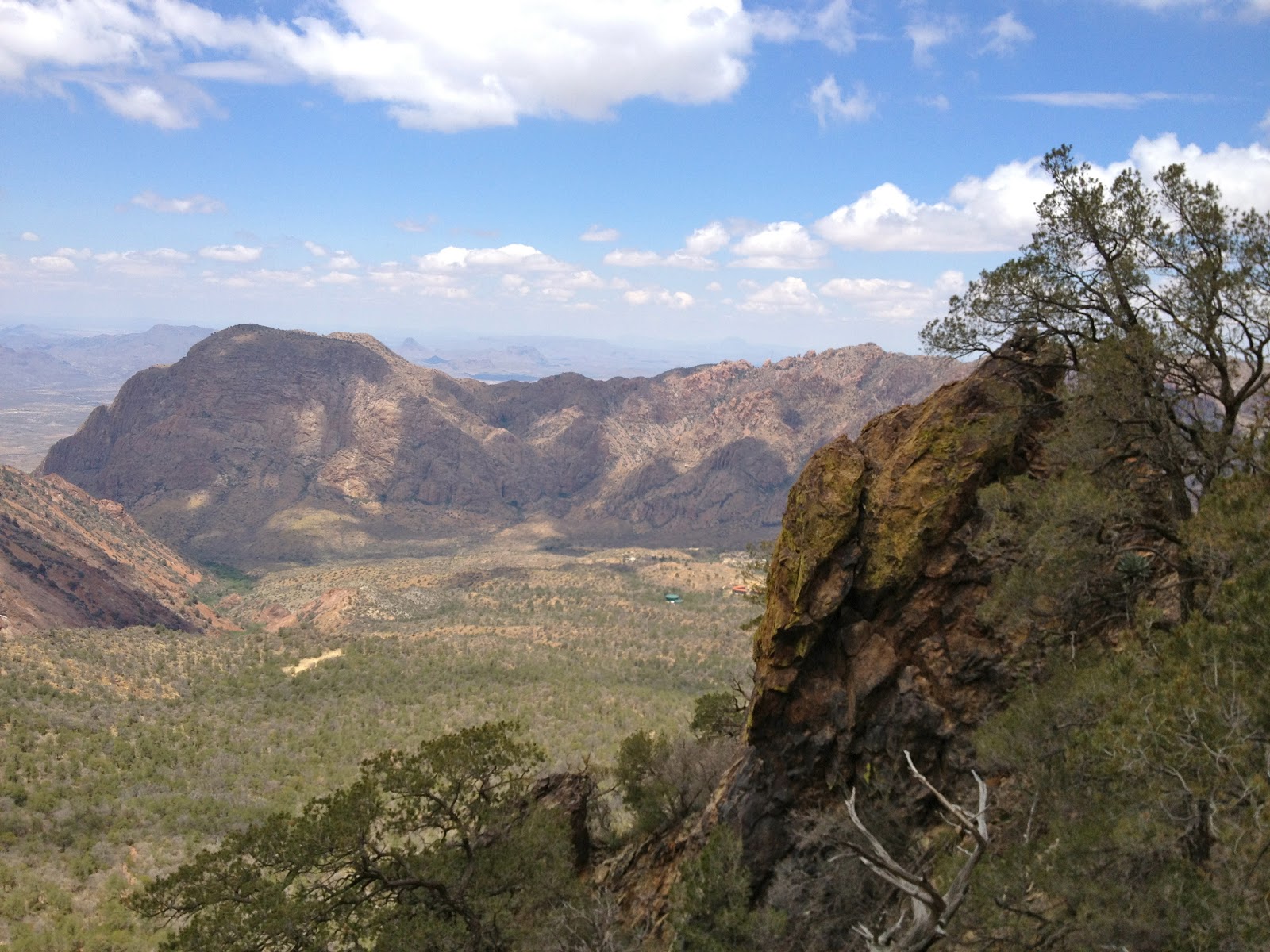 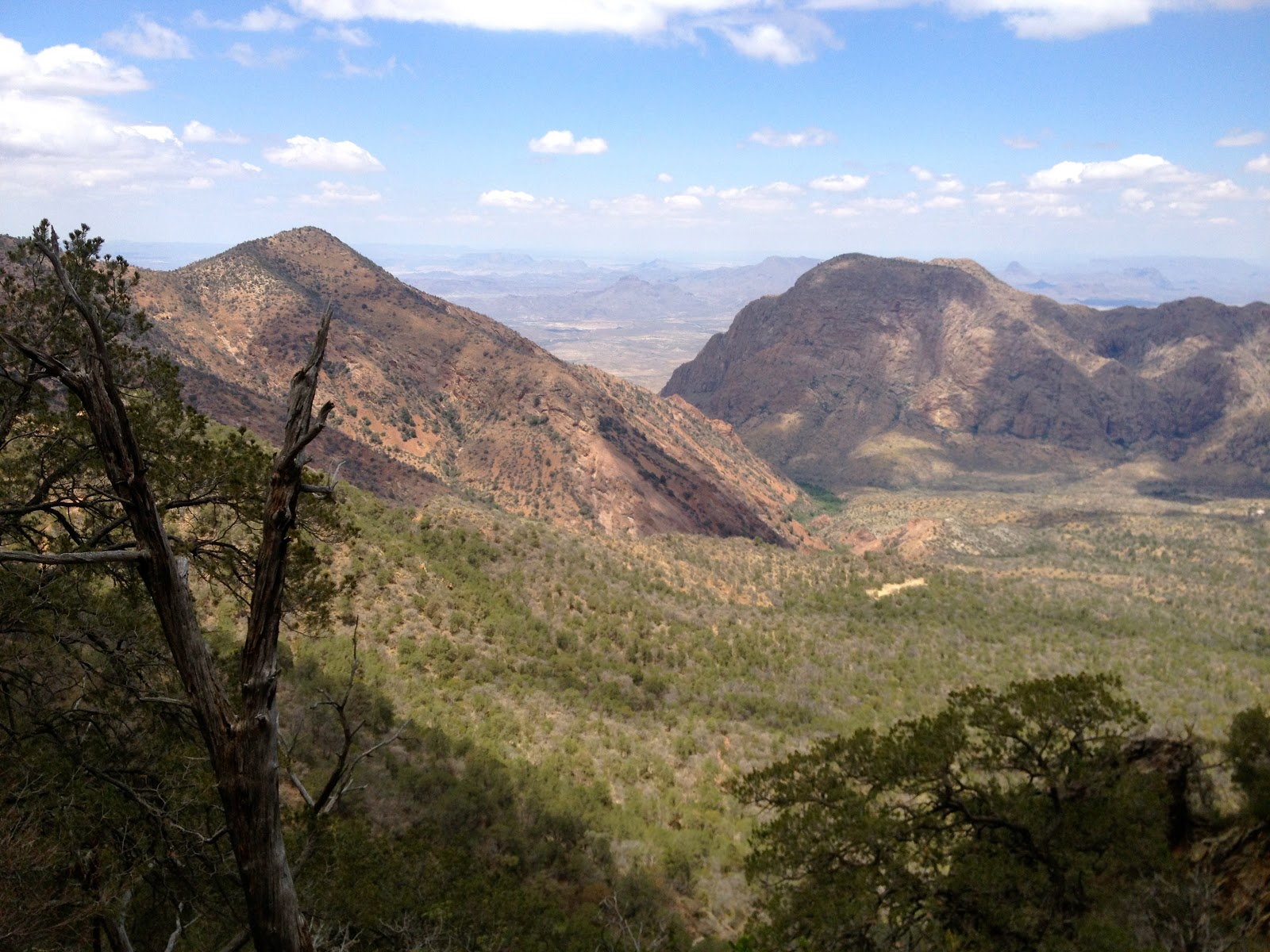 The second part (!) of the hike was along Boot Canyon. Although there are no major changes in elevation, the trail is exposed to the sun and wind. 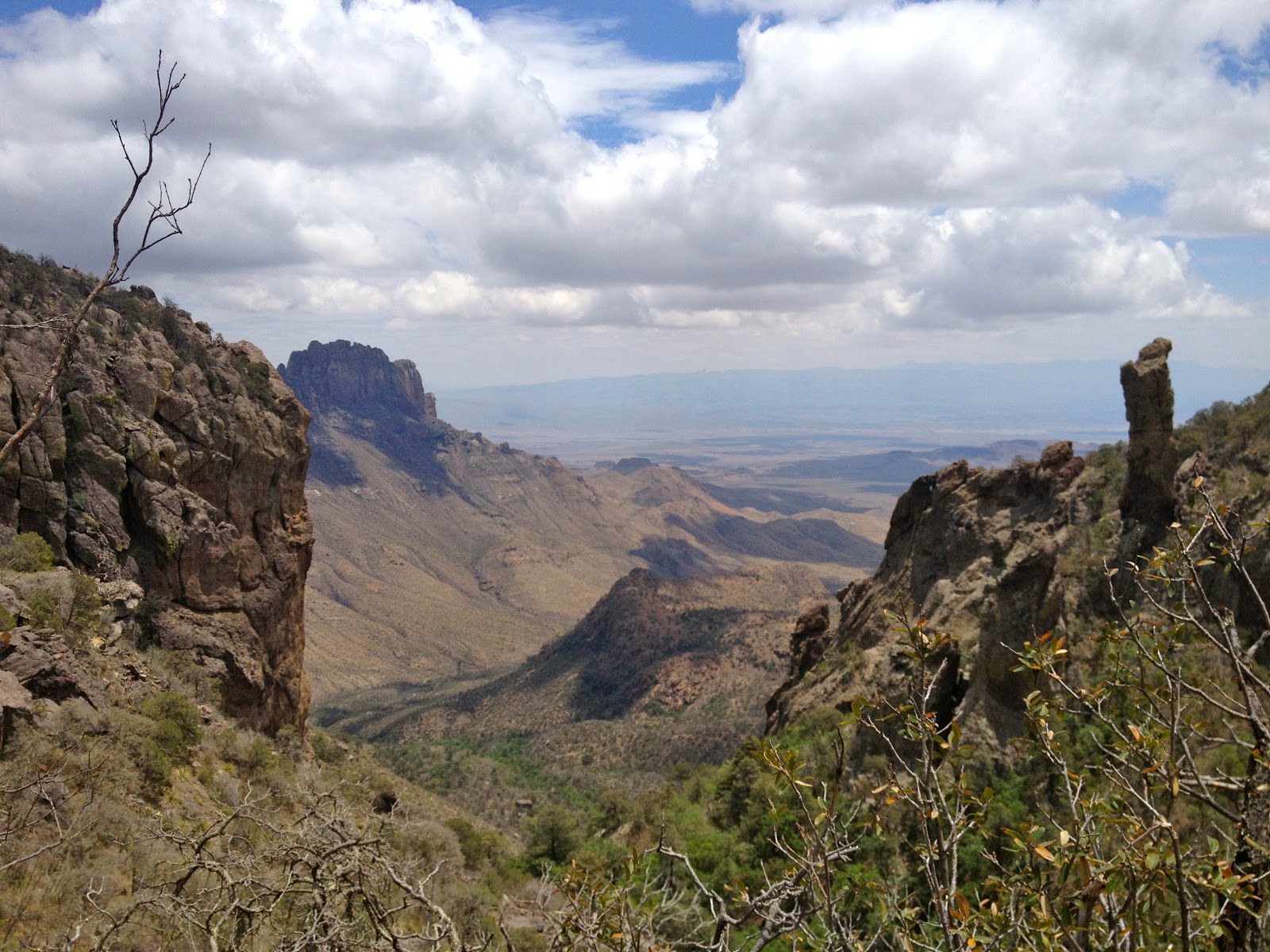 A mile or so along Boot Canyon is a spring - as well as a horse corral, and a funny little cabin. It was to the former that I was headed - based on a recent report of a Flame-colored Tanager - a bright orange male, with a striped back. I descended to the spring, which seemed completely dead - certainly no tanagers there. Shortly after the spring, is a dry stream bed, that had much more activity. Thinking this must be the site, I spent a couple of hours waiting. There were some good birds to be had - my first Cordilleran Flycatcher, a pair of Blue-throated Hummers, and a Hepatic Tanager - but no Flame-colored.

Despondently, I decided to give up. As I was walking back along the trail, I started to hear the emphatic call of a tanager - that sounded exactly right for Flame-colored. It was calling from the spring - exactly where I should have been for the past 2 hours! I ran down, and quickly located the bird - a young male Western Tanager. It kept calling for 10 minutes, before quietly slipping away into the canopy. What I didn't know at the time, was that the reported Flame-colored Tanager had been seen associating with a young male Western. I wish I'd spent more time there (i.e. in the right place!) looking at non-Western Tanagers (i.e. the right bird.)

The Colima was still busily singing in the same place on the way down - a long hike that was in many ways more painful on my legs than the hike up. The sun had come out (it had been bitterly cold in the morning) and was burning the back of my neck. I'd drunk all my water, survived the unseen Lions and Bears, and was happy to arrive and fall into the car - even if it was like an oven inside.

I had one more destination today - before driving as far towards south Texas as my wakefulness would take me. I'd seen reports of Lucifer Hummingbird at the enigmatically sounding Christmas Mountains Oasis. I had no address for it, nor could find any directions online. But I had a rough idea of where it was located.

Where it was located was a cross between a hippy commune and the horror movie, "The Hills Have Eyes." Well, maybe the opposite of hippies - it was a ramshackle collection of trailer homes, discarded cars and junk out in the desert - with reminders to "Stay Away", and welcoming signs such as: "Private Property" and "No Trespassing." The signs commenting on the evils of the IRS suggested this place was off the grid, populated by those wishing to escape the burden of society. I drove around for 30 minutes on a patchwork of rocky desert roads, never finding the oasis. Nor any people - the few places that might have been inhabited did not respond to my requests for help, except for those that seemed inhabited only be large, angry dogs. It did not feel like a safe place to be asking for help.

Finally, one of the homes was welcoming and a friendly couple gave me directions to the oasis - but warned that the road was very steep and dangerous. When I got to the right road, a sign warned the same - "dangerous road." And it was - yet another bone-jarring ride up a very steep hill, all the while wondering what would happen if I broke down out here (i.e. how long would it take the mutant people to find and kill me?)

The oasis is just that - a welcome respite for birds (and birders) in the middle of an otherwise hot and dusty desert. It's been a labor of love for the past 30 years by its creator, Carolyn Ohl-Johnson. There are feeders, shade, and water. It's an absolutely beautiful place in which to sit and watch the desert birds. 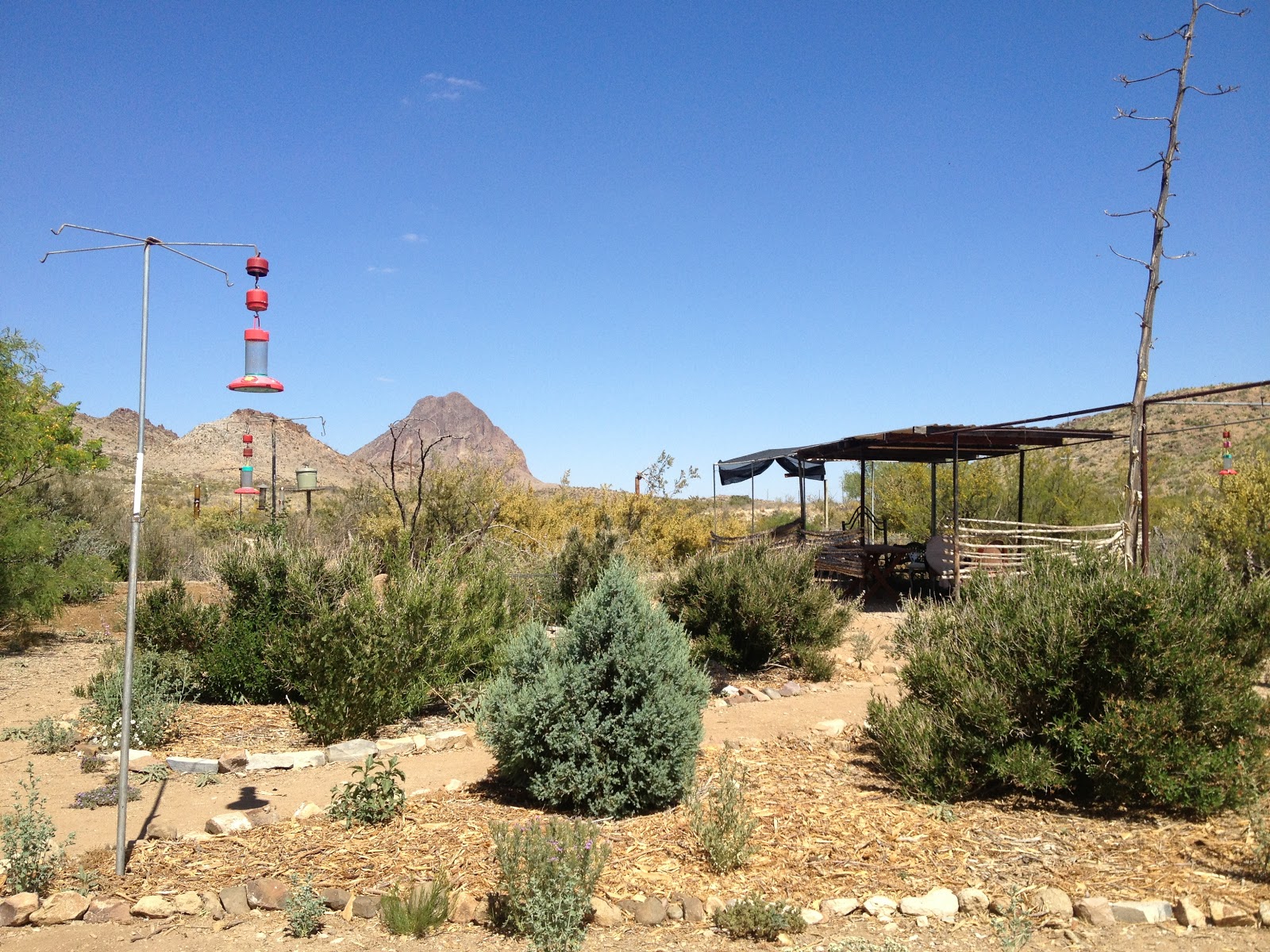 I was here specifically for two of those birds: The Lucifer Hummingbird (which I'd missed in the Huachuca Mountains, AZ) and the Varied Bunting. And I didn't have to wait long before I saw both... 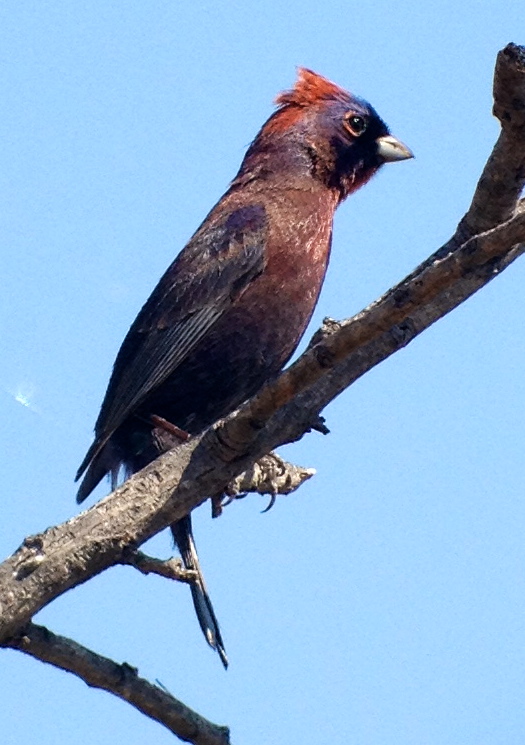 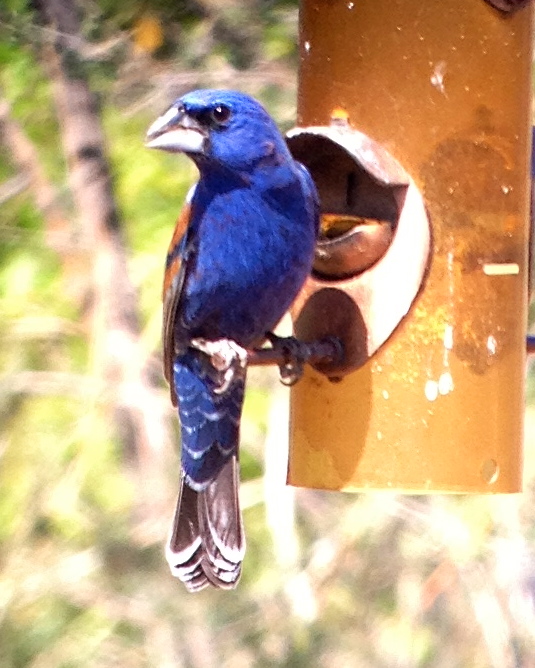 And the highlight - the gorgeous Lucifer Hummer (the male - with the purple gorget only visited briefly - and too briefly to get any pics.) 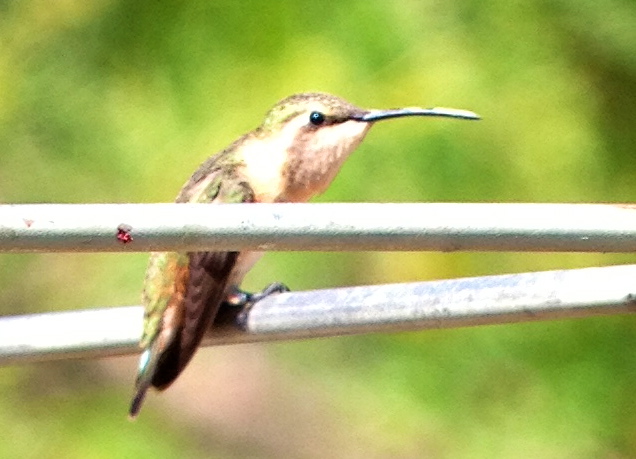 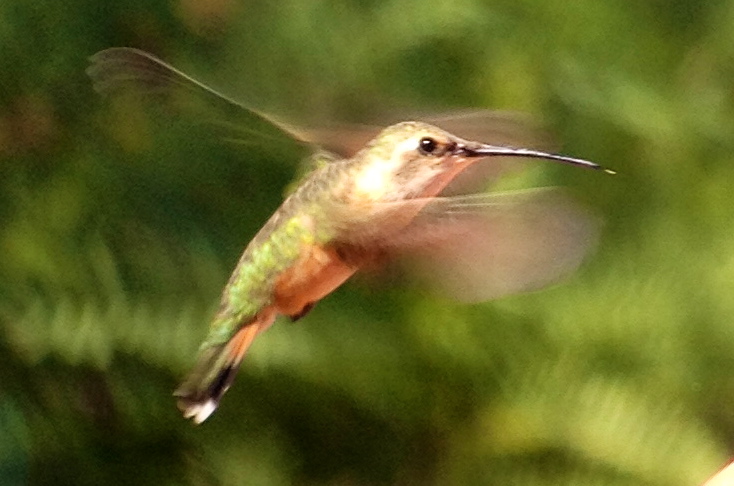 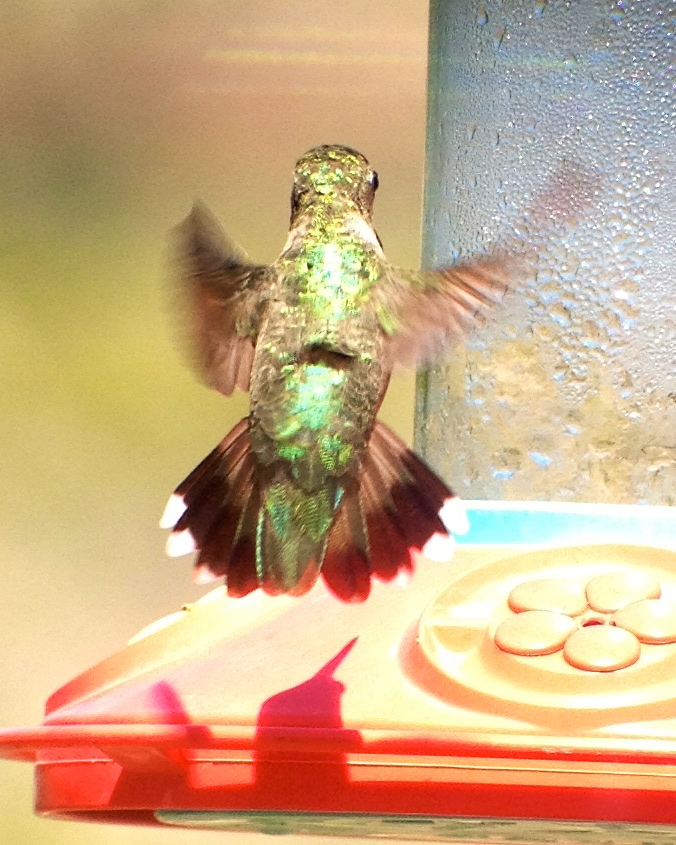 I left the oasis as the sun was dropping towards the western horizon. My plan was to get as far as I could tonight, so that I'd be in south Texas the tomorrow. I made it to San Antonio, 7 hours and 450 miles away before collapsing for the night.

After the Big Bend, I was ready for the Big Sleep.