SNAKES ON THE PLAIN - (AND WHITE-EARED HUMMER!!)

Today was my last day in AZ on this trip. It was a bit of a mopping up day - trying again for some birds that have so far eluded me.

I started at Madera Canyon, this time driving up to the amphitheater (yes, it really is an amphitheater way up the middle of a heavily-forested canyon.) Following up on a tip from Laurens Halsey, I was going to walk a trail that - supposedly - is good for Montezuma Quail. Montezuma Quail are noteworthy for 3 things: they are tiny, the males have a black-and-white clown face, and they are impossible to find. Actually - the latter isn't entirely true (otherwise they wouldn't be in my bird book - although Atlantic Puffin is, which I believe *is* entirely fictitious.)  Which reminds me of that Monty Python sketch where a man goes into a bookstore and asks for the field guide (Olsen's Standard Book of British Birds) that has Gannet removed - the "expurgated version"...

Anyway...back to my story: the Montezuma Quail. They're impossible to find *only* if you're actually looking for them. The best way to find them is to not look for them. This seemingly oblique and helpful advice is, of course, entirely useless. I don't look for them when I'm on the coast, and I'm pretty sure I'm not going to find one floating on the ocean. So - it's a good idea to know about reliable places where you can go and *pretend* you're not looking for them. Today, I was going to pretend to not look for them near the amphitheater.

The quail like steep hillsides, often slightly rocky with short grass. They don't run away when you approach - they stand completely motionless, and only fly if you almost stand on them. Oh - and that clown face helps make them blend into the surroundings. Maybe looking for Puffins might have been a better idea...

The wind was howling from the previous day's storm as I ascended up the rocky path. I imagined the quail would be out walking about on the same path that I was. They were not. I did not flush any. Twenty minutes later, and still no quail, I was getting desperate. Maybe if I scanned the nearby slopes I could spot one camouflaged against the ground? I stopped, looked uphill, and immediately heard the buzz of wings behind me as a bird exploded into the air. A quail! I only saw the brown back, short tail, and rounded wings, as it landed further up the hillside. Did I just imagine this? Moving closer to where the bird landed, I flushed another (or same) bird, which flew much further up the hill. That was it. The quail show was the back of a bird flying away from me - but it was enough. One day I'll actually see them sitting on the ground. But not today.

Driving back down Madera, I passed the Santa Rita Lodge, and the morning Turkey Parade, as the hungry birds head for breakfast at the feeders. 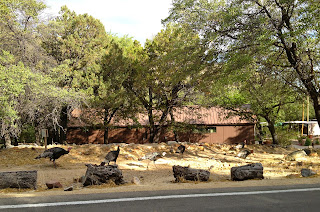 Down at Proctor Road I walked the loop, and heard a bird I'd been listening for. "Psee-yeet", a rising, slurred call. The Pacific-slope Flycatcher! This is an Empidonax flycatcher - the genus where they all look very similar (Hammond's and Dusky were the other two new ones I got on this trip.) Pacific-slope used to be called Western Flycatcher until it was split into Pacific-slope (west coast) and Cordilleran (breeds in AZ at high elevation.) Unless you have a male calling, at this time of year, you can't reliably separate them. It's thought that most of the yellow-bellied Empids in AZ at this time of year are Pacific-slopes migrating through. (The Cordilleran arrive later and stay.) This bird was a rich yellow-green, with an entirely orange lower mandible, and a lovely tear-drop eye ring.

After coffee at Java Posada - a fantastic find, and the best coffee within 20 miles of the canyon (almost the *only* coffee...) I headed to Montosa canyon to try for Black-capped Gnatcatcher. I'd missed this bird back in Jan. Montosa Canyon has been reliable in the past (but not for me in Jan!), so I thought I'd give it another go. Don't worry, there's not another long quail story here - I didn't get the bird. I didn't really expect to get it, so wasn't too disappointed. I did, however, find some nice birds here - the highlight of which was a a MacGillivray's Warbler on the side of the road. I heard a soft chipping noise, and immediately recognized it from hearing this back in Boston (we've had two birds in also as many years.) After the 2 hour vigil at San Pedro House, I found one in less than 5 minutes without even looking for one - a scenario that will be familiar to any birder. I also had another Pacific-slope Flycatcher (also calling to confirm it's identity) and a lovely purple-gorget Costa's Hummingbird. Although there were no gnatcatchers, there were lots of immigrant-catchers - the border patrol were out in force on this road this morning.

I headed down to Patagonia to try for the Thick-billed Kingbird again (it had been reported at Spirit Lodge.) After lunch at the awesome Gathering Grounds I tried the area around the Lodge. Apart from some Dusky-capped Flycatchers, and *another* Pacific-slope Flycatcher, I couldn't find a Kingbird. What I did find was this... 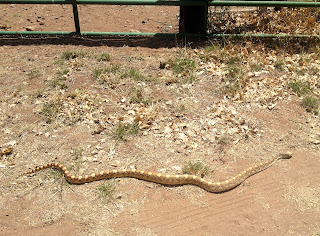 Important - when looking up at birds, also look down while walking.
Bullsnake - Spirit Inn, Patagonia.

I almost stepped on this guy. It's amazing how the stripes just blend into the ground. If there had been anyone around (there wasn't - this is the middle of nowhere, remember!) they would have seen me leap up, swear, mildly freak out, and then turn around to make sure no-one witnessed this embarrassing spectacle. As if this wasn't ridiculous enough, as I was walking back along the path, the same exact thing happened again.

The snake is a Bullsnake - which has a very similar look to a Diamondback Rattlesnake - minus the rattle on the tail, and the flat head. They capitalize on this similarity by pretending to make a rattle sound, flattening their head, and rearing up like a Rattlesnake. Although this works quite well for animals that are scared of rattlesnakes, it doesn't work well with humans, who fall for the bluff and kill them. Apparently, even rattlesnakes fear them - so it's good to have these on your property.

Anyway - back to birds. No Thick-billed Kingbird. This bird is going to make me work for it - like the Gray Kingbird in Florida.

Talking of birds earning their tick, I went back *again* to Huachuca Canyon for the third time looking for the Northern Pygmy-owl in the parking lot. I followed the now standard protocol with this bird: hand over ID to army guards to gain access into the base, drive through base, drive up crappy canyon road, park in parking lot, get out of car, look for owl, don't find owl, get back in car and repeat in reverse order. Here's the tree where I believe they're nesting (and seen by others sitting in)... 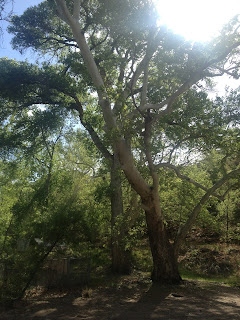 Inside this tree is a Northern Pygmy-owl.

As I was leaving Fort Huachuca, I checked the AZ listserv for bird news - and there was big news: a male White-eared Hummingbird had been seen from 11am today at Beatty's B&B in Miller Canyon. That's 30 mins away!

White-eared Hummingbirds are similar to Broad-billed, but have a shorter bill, and an obvious white line extending back from the eye through the "ear". Although extremely rare in the US, they used to be fairly regular summer birds in the Huachucas, although in 2011 none were seen. Last year, there was a single male at Beatty's. I arrived at 4pm, hoping that I wasn't too late, and that the bird was still here and hadn't passed through. I was in luck - it was last seen about 20 minutes ago. I waited, and after seeing all the other hummers there (including a lovely female Blue-throated) it finally came in, calling continuously with its distinctive (warbler-like) chip notes. It settled onto a feeder and filled up with sugar water... 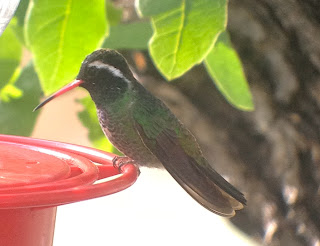 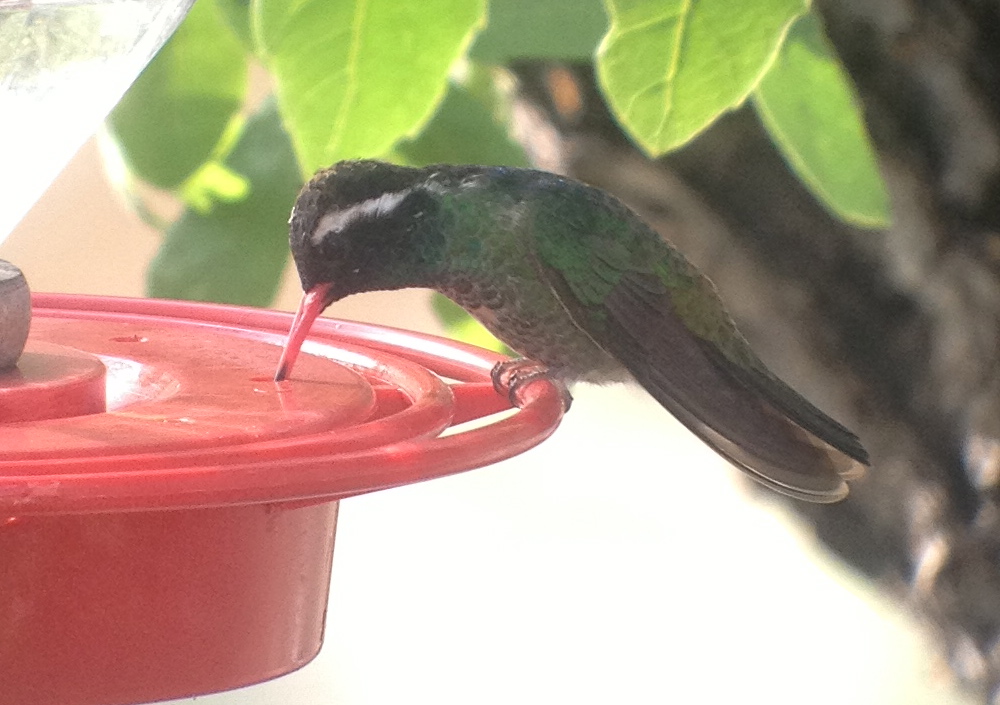 And that was the last bird on this trip. An unexpected addition, and a great way to end my travels here. I'd missed some important birds: Black-capped Gnatcatcher, Northern Pygmy-owl, Thick-billed Kingbird and Mexican Chickadee - that will bring me back at some point (as well as the later-arriving Sulphur-bellied Flycatcher and Varied Bunting.) But I'd also seen some amazing birds. Favorites included: all the hummers (for their personalities, zipping around buzzing at each other); Pacific-slope Flycatcher (lovely subtle coloration and tear-drop eye-ring); Virginia's Warbler - for keeping me waiting so long; and the Five-striped Sparrows - for not having to go back to California Gulch!