Every birder has at least one nemesis bird - a bird they've chased many times over and never seen. And many birders have the misfortune of having several nemesis birds - arch-enemies that continually entice us and then slip away. I have a nemesis bird: it's the Golden-winged Warbler.

Golden-wings nest in the mid-west. They used to breed in MA until fairly recently - when the population started to plummet. It's thought that inter-breeding with the (now) more common Blue-winged Warbler is leading to their extirpation. We get one or two every spring in MA as migrants - I've chased two of these, missing one by 5 minutes (which was then not seen in the next 5 hours while I waited, more and more despondently.) Perhaps the worst miss was back in the UK. Rather amazingly - for a bird that's already extremely uncommon in the US - one turned up very lost in Kent in 1989, in a parking lot at Tesco's. Being busy with school work, I waited too long before I went, and never saw it. I was about the only birder in the entire UK who failed to make the pilgrimage.

This spring has been great for Golden-wings. They've been reported all over Texas, dropping in on their way north. Finally my chance was here to put an end to this ridiculous nemesis. One place that's had a lot has been Warbler Woods - with as many as 4 seen yesterday.

Warbler Woods is a private residence east of San Antonio that attracts spring migrants and migrant birders. Regularly scoring double-digit numbers of warbler species, it's appropriately-named - the woods really do seem full of warblers. The centerpiece is the pond in the back yard - which seems to eventually entice all of the birds in for a quick drink. This is birding at it's most laid-back - sitting in a deck chair waiting for the birds to come to you! And, over the course of the next couple of hours, the birds did come to us: Nashville, Tennessee, Ovenbird, Chestnut-sided, Magnolia, Black-throated Green, Redstart and Wilson's. Everything but the bird I wanted! It was hard tearing myself away - knowing that the minute I left, the Golden-winged would jump out and show off its golden plumage.

I left Warbler Woods at noon - nemesis intact - and headed down to the Rio Grande. After a 5 hour drive, I had time to check out one place - I chose Resaca de la Palma, a series of wooded river channels west of Brownsville. The place was hopping with migrants - Red-eyed Vireos, Redstarts, Blackburnian and Bay-breasted Warblers and day-flying Common Nighthawks. I even caught up with a Philadelphia Vireo - this week was the peak of their migration. This is a tough bird back east - only rarely seen on its return fall migration. They breed in the far north and I was very thankful not to have to track them down there!

One of the specialties of South Texas is the Groove-billed Ani. They're members of the Crotophaga genus, an offshoot of the cuckoo family. Unlike the latter though, they're not brood parasites (laying their eggs in other birds' nest for them to raise), but form small breeding colonies of their own. They follow cattle around, feeding off the insects they attract (Crotophaga means "tick-eater" - it was once thought that they picked the ticks of cattle and ate them - a nice image that's probably not correct.) They have a wobbly flight, and an endearing call that sounds a bit like a squeaky toy. I encountered a couple of them as I was leaving... 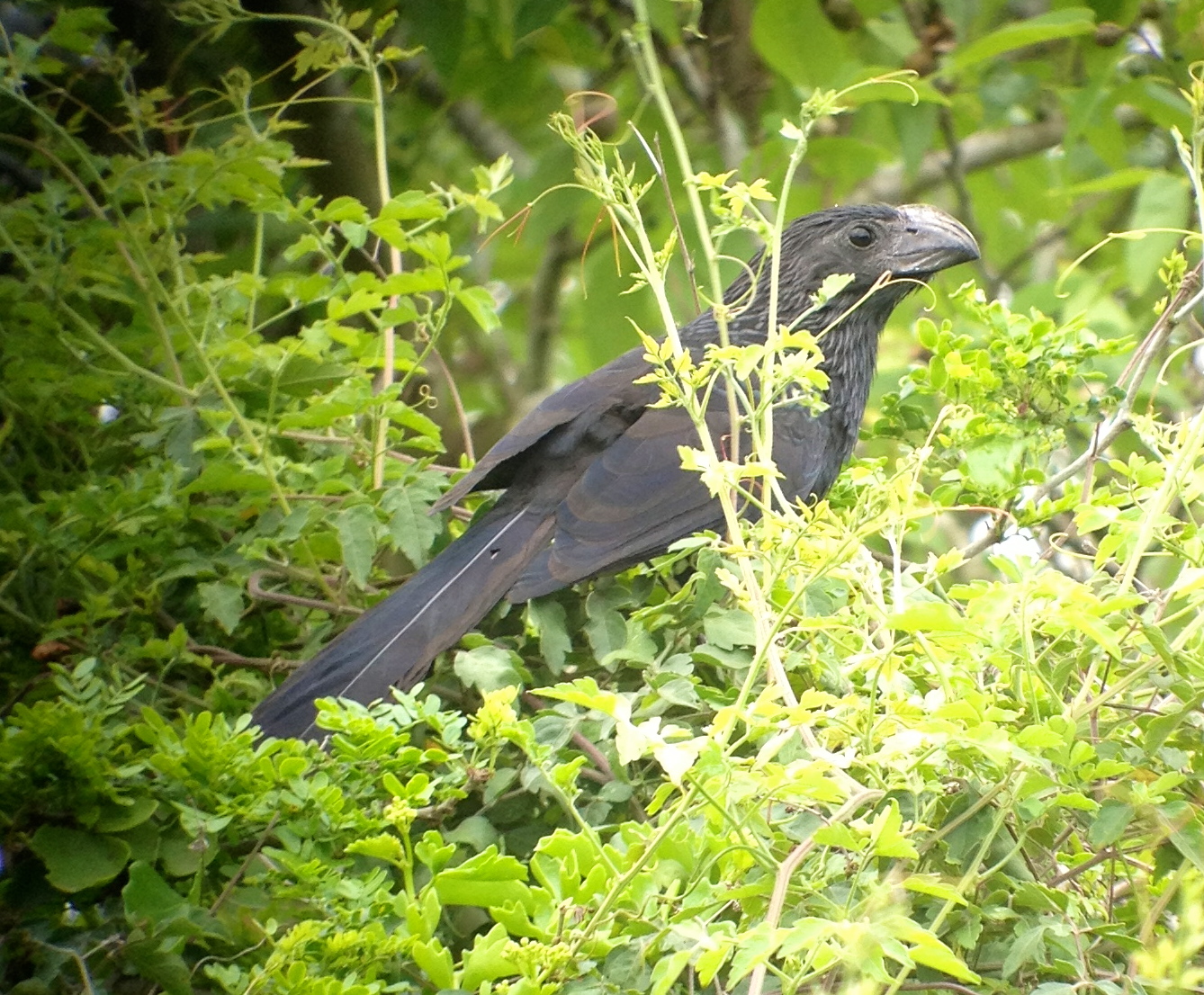 It was getting dark, so I headed back into Brownsville to Oliveira Park - a traditional evening roost for the Red-crowned Parrot. Unlike the parrots and parakeets I'd seen in Florida - these ones are actually supposed to be here! They're native to northeastern Mexico - although it's believed that the small population in south Texas has been bolstered by escaped birds. When I arrived, my hopes weren't high - the whole park was covered with kids playing soccer. But the birds didn't seem to care - they slowly started flying in, their screeching calls alerting their presence. They sat on wires and in trees, often right over the soccer action. 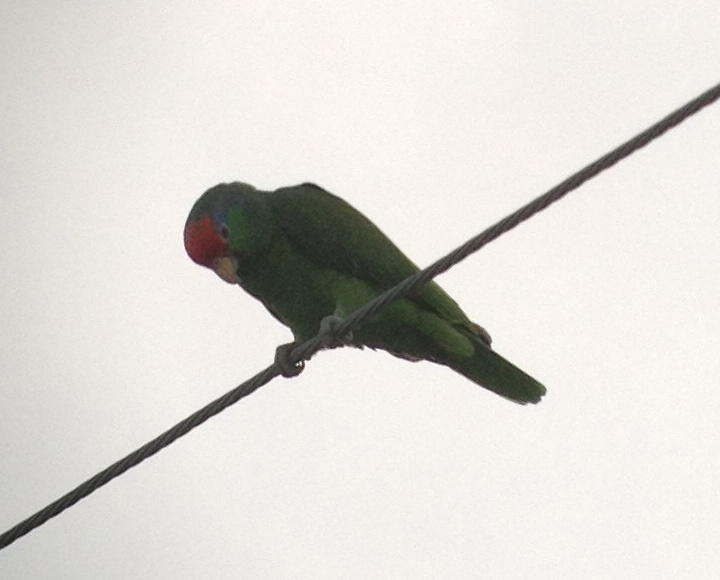 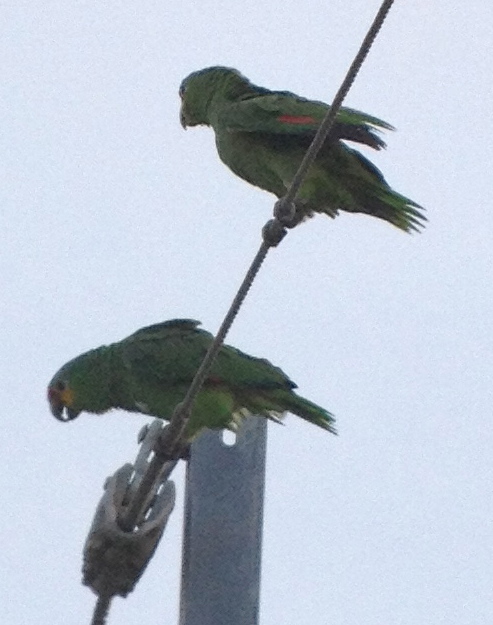 On these birds, the red secondary feathers can be seen in the closed wings.

With still a half-hour of light, I thought I'd try for the parrot I'd missed last time - the Green Parakeet. They're been seen in small numbers around the Weslaco neighborhood of McAllen. I rushed over there, hoping my luck would continue. But it was really getting dark now. If I hadn't been stuck in traffic outside a gas station, I probably wouldn't have checked my dashboard and seen this... 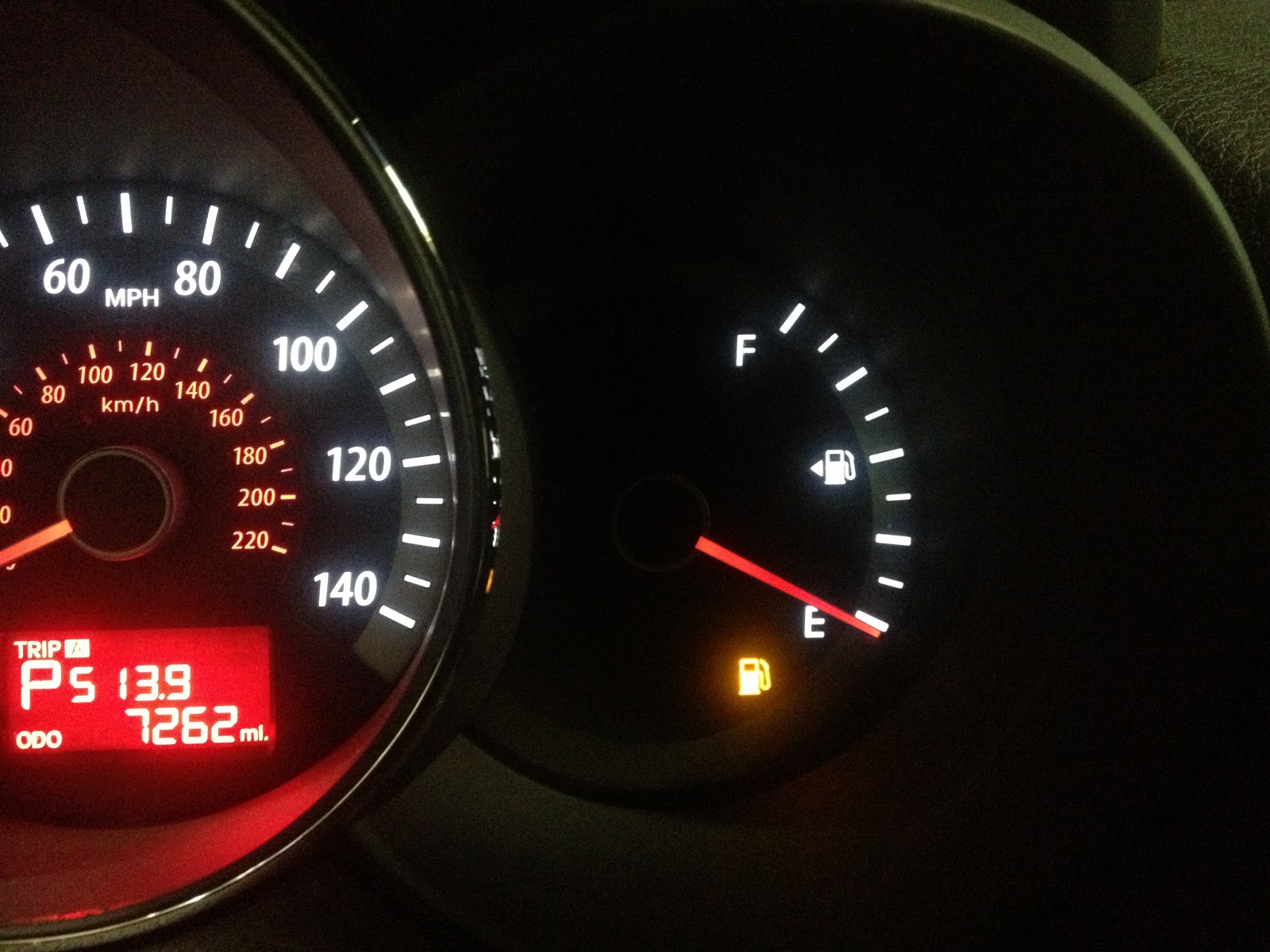 I'd been so focussed on the birds, that I hadn't even looked at my gas levels all day. Oh - and I should blame the rental car too - it didn't make any of the beeping alarm noises that it's supposed to when it's about to die. I was grateful that I was where I was, and not out in the desert! As I filled up, the remaining light was sucked from the sky, the streetlights flickered on, and my day of birding was officially over. I'd have to save the parakeets for tomorrow. And after a third day of 500+ mile driving, it wasn't just the car that was running on fumes.