Today was all about the owls. Well, and some hummingbirds. And warblers. And maybe a few flycatchers. OK - so a whole bunch of great stuff.

The fun started in Miller Canyon, as the southern end of the Huachuca mountains. The Huachucas are one of the so-called "sky islands" of Arizona - forested mountains surrounded by low level desert. Their ecologies are effectively separated from each other by a combination of the intervening desert, and the vertical elevation. Most of the birding I'm doing here is focused on these sky islands: the Santa Ritas (Madera and Florida Canyon), Huachucas (Miller, Ash and Huachuca canyons), the Chiricahuas (Cave Creek) and the Catalinas (Mount Lemmon).

Miller Canyon is famous for the hummingbird station at Beatty's B&B lodge, and the canyon that runs above it. 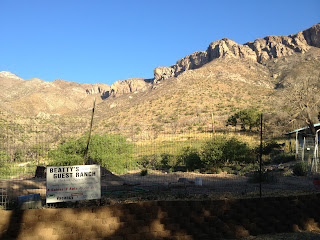 In recent years, the canyon has played host to a very special owl - the Mexican Spotted Owl. Ten minutes of moderate climbing, and I was face to face with my first... 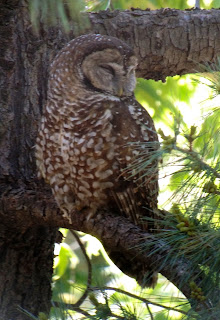 Mexican Spotted Owl - Strix occidentalis lucida.
Separated from the very similar Barred Owl by (you've guessed it)
spotting underneath rather than streaking.

After being thoroughly ignored by the sleeping owl, I continued up the canyon. It's a steep climb up from the lower mixed forest, to the coniferous pines above. The effects of the devastating forest fire of 2011 can still be seen around the canyon - blackened and dead skeletons of trees.

After only seeing Plumbeous Vireos on this entire trip, I was happy to see an alternative (and a much-needed one too): the Cassin's Vireo. 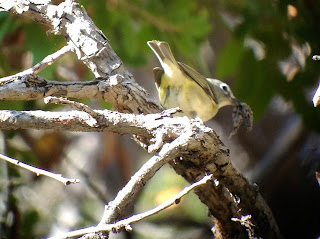 Cassin's Vireo
A much more colorful alternative to the two-tone Plumbeous.

I also saw Grace's Warbler, high up the canyon (and, annoyingly, high up in trees.) I also had a frustrating calling Buff-breasted Flycatcher which remained hidden. A quick stop at the hummingbird feeders paid off with Broad-tailed (lovely bright red gorget) a late Calliope Hummer (as well as the "usual" Broad-billed and Black-chinned, and a locally uncommon Costa's.) It was really fun to sit and watch these little guys zipping around feeding, loudly buzzing and aggressively chasing each other off feeders. No photos - my high-tech photo equipment (holding iPhone up to 'scope) couldn't keep up with their speed. (Hoping the new iPhone 6 will be hummingbird compatible.)

Ash Canyon is the next canyon to the south and also features a B&B with a feeder set up. No hummers here - they were all out feeding on real flowers - but lots of other great birds... 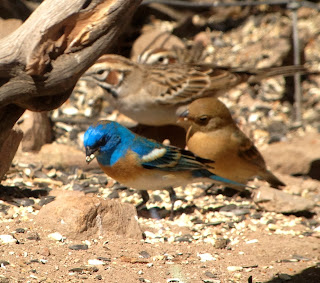 Lazuli Buntings (male and female).
Notice the Lark Sparrows busy stuffing themselves at the back. 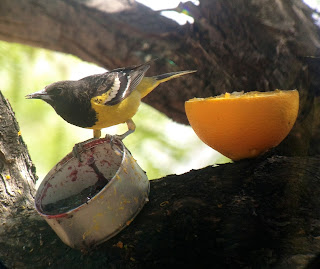 Scott's Oriole
"Do you think this'll fit in the fridge, honey?"

On my way back north, I stopped in at Huachuca Canyon. This is a slightly different protocol than most birding locations, as you have to enter through a US army base. Being able to bird Huachuca Canyon is a big plus for gaining citizenship (they should advertise this more to Green Card holders unsure about committing.) I arrived at the parking lot after just missing a Northern Pygmy-owl. But I could hear noisy Trogons barking at each other further up canyon. Although they remained hidden, I did finally get acceptable views of the Buff-breasted Flycatcher.

The San Pedro river runs north from Mexico, and waters a thin strip of life in the middle of the desert. There's a lovely refuge here - the San Pedro House - with feeders, and trails along the river. I saw my first Bullock's Orioles of the year, as well as MacGillivray's Warbler - which took quite a bit of chasing (2 hours, seen just as I was leaving - I almost stepped on it!)

I was back at Madera Canyon for night birds. This time I wasn't alone: I enlisted the help of a guide - Laurens Halsey, one of Arizona's top birders.  Starting at the Upper Canyon, we waited patiently for the sun to set. A Hammond's Flycatcher was busy finding its last meal of the day. Told from the very similar Dusky Flycatcher by a longer primary projection, more of a crest, and its odd habit of flicking its wings and tail back. I'd been struggling with silent Empids, and having Laurens' help on this was very appreciated. I enjoy birding on my own, but birding with an expert reminds me how much I still have to learn. In this case, it was also nice not getting lost up the side of the canyon in the dark (which would have been the result had I been alone.)

At 7:16pm we heard the explosive call of the Mexican Whip-poor-will. This bird used to be considered conspecific with the regular (and now "Eastern") Whip-poor-will. This is a "goatsucker" (in the family caprimulgidae) - they hunt insects at night, and remain hidden by their surprisingly camouflage plumage during the day. (Sadly, despite the name, no goats are sucked - at least none that I saw.) Using a flashlight, I was able to get one quick view of the bird, and also saw it flying across the clearing, a silhouette against the night sky. A distant Whiskered Screech-owl called - its oddly emphatic morse code call, and Elf owls contributed their funny chattering. Neither were seen.

At this time, a wind storm rolled into the canyon. It's a big storm that will blast through over the next 24 hours, and potentially ruin any birding. I missed the Common Poorwill at the bottom of the canyon (Proctor Road) as it was too windy to hear. Birding in rain is much better than wind. With the latter, they tend to hunker down, and shut up.

Tomorrow, I'm getting up early (for a change!) and driving up Mount Lemmon - the highest peak (9,157 feet) of the Santa Catalinas. I'm hoping for the remaining two warblers - Olive and Virginia's - which like high elevation (especially Olive.) This is also a back-up spot for Zone-tailed Hawk. Hoping that the wind isn't completely insane up there...