One of the (many) great things about living in Cambridge, is how close it is to the airport (15 mins.) Although, that didn't make my 6am flight any easier to get up for. Setting multiple alarms for 4am-ish no longer seems unusual - although it never ceases to seem cruel.

I've flown through Baltimore (BWI) enough times now that I know the Starbucks staff. This morning, I had even longer to appreciate my coffee, as the connecting place was broken. Well - the windshield wipers were broken. I didn't know planes had these? Aren't they going so fast, that any rain just flies off? What else do they have? Reverse lights? Sun visors with vanity mirrors?

After a delay of an hour, we left the rainy skies of Baltimore, and headed for the heat wave of Phoenix. I'm not sure if it's technically a heat wave - maybe 100F is normal here. I do hope not...

For my first afternoon, I thought I'd head north-west of PHX for Gray Vireo which isn't present further south where I'm going, as well as nesting Common Black-hawks and Zone-tailed Hawks.

As I entered Sunflower (the place, not the plant) I pulled over to the side of the road, and pished. Immediately, in flew a gray bird which started calling like a vireo. Gray Vireo! Very nondescript bird, except for the obvious hooked vireo bill, eye-ring, pale lores, and faint wing bar. But this bird was anything but ordinary - it was my 500th bird of the year! Just managed to sneak that one in before the end of April.

This was a good start. I thought I might miss this bird and have to come back this far north, so this bought me some much-needed time. 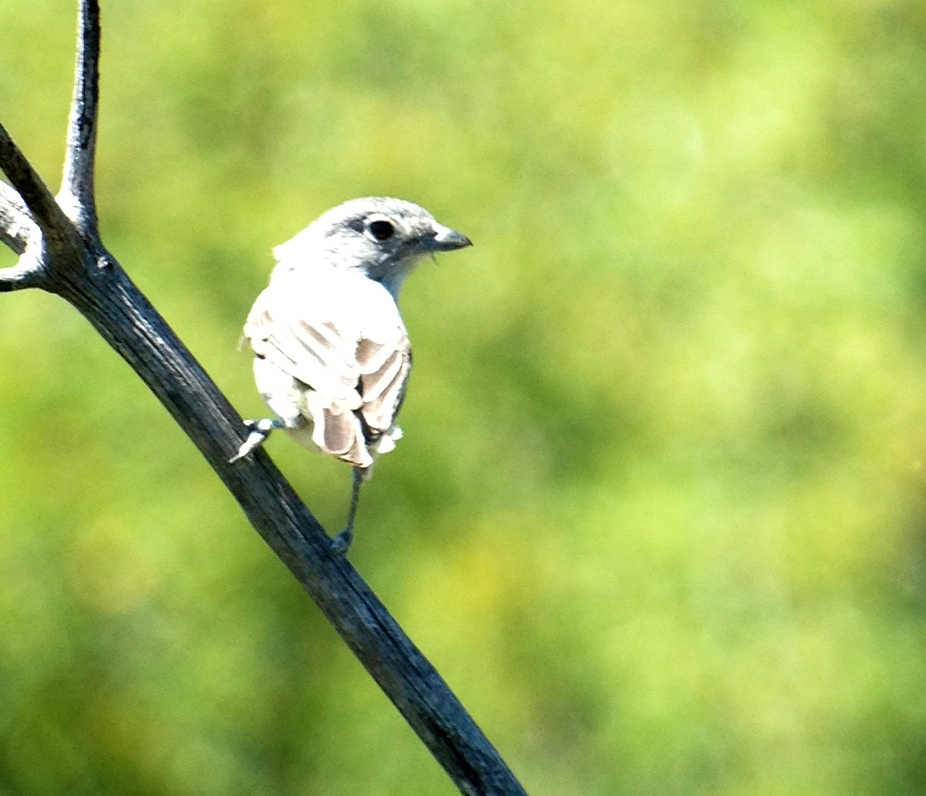 Gray Vireo - this bird is my 500th for the year!
(I hope it knows and appreciates this.)

Common Black-hawks have been nesting along the Old Beeline road for many years. There's a creek that runs along the road, which waters the large sycamores, and provides shade for an otherwise dry and hot landscape. With the help of a very kind neighbor - Bob - I found the nest. On the nest was a black and white tail. Well - that's all that was sticking out. It was clearly a Black-hawk, but I wanted more than just the tail. Gaining some elevation I could just about make out a head at the other end of the nest. A little better.

I continued to the end of the road, which is reported to be good for Zone-tailed Hawks. These are pretty amazing raptors - they've adapted to look and behave just like Turkey Vultures. In flight, they are almost identical. They even hang out with TVs. And yet, they're completely unrelated.  It's believed that this disguise fools their prey, which aren't ordinarily concerned with the carrion-eating vultures. Unfortunately, I never got to see any of this mimicry, as I didn't see any. That's not a huge miss - I have several more chances - especially on Mount Lemmon.

I did, however, find another Black-hawk nest. This time, with a head sticking out... 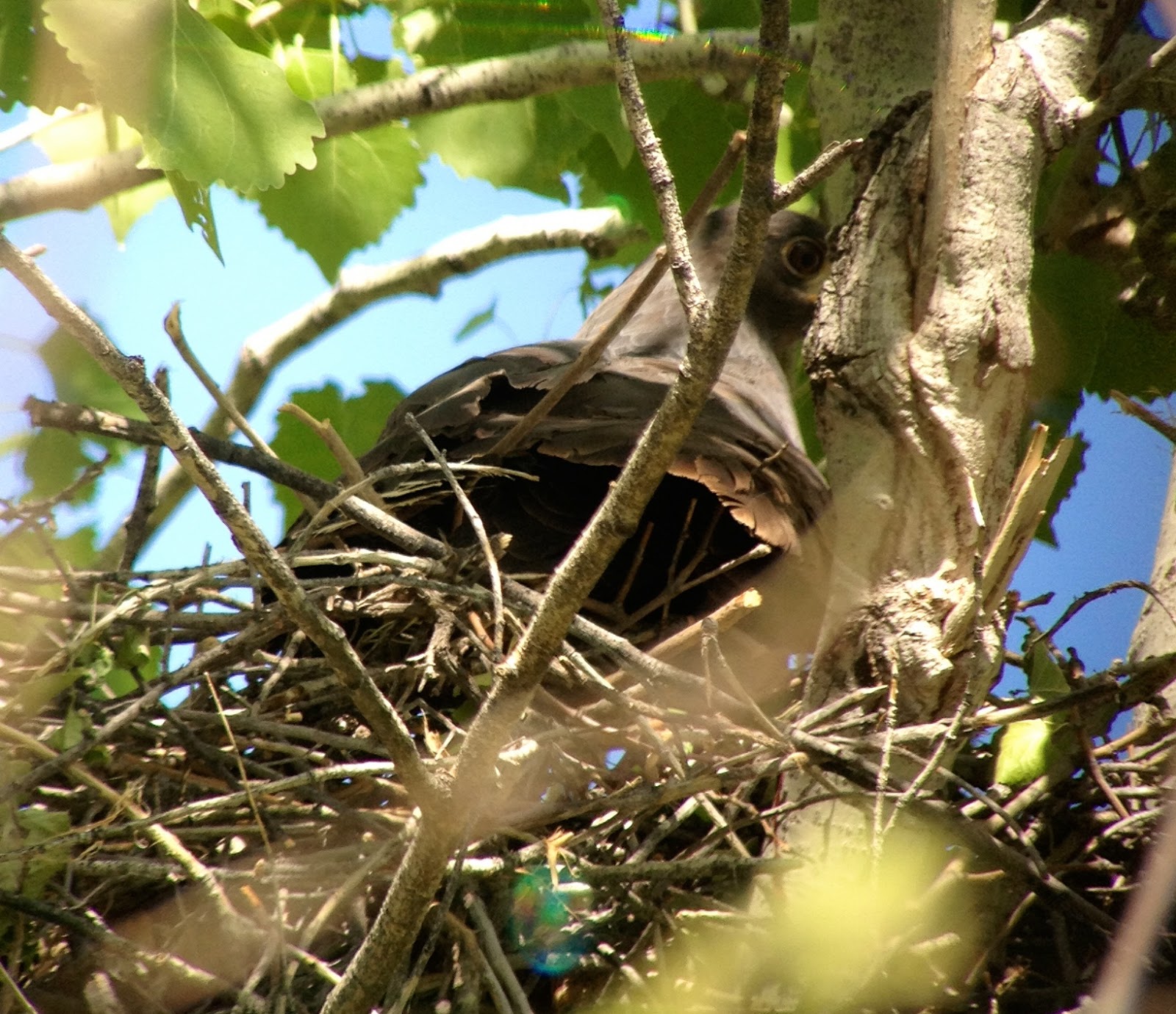 The head soon took off (with an attached body), as the bird was flushed by a seemingly annoyed Cooper's Hawk. Now - I got to see the whole bird, in flight and perched... 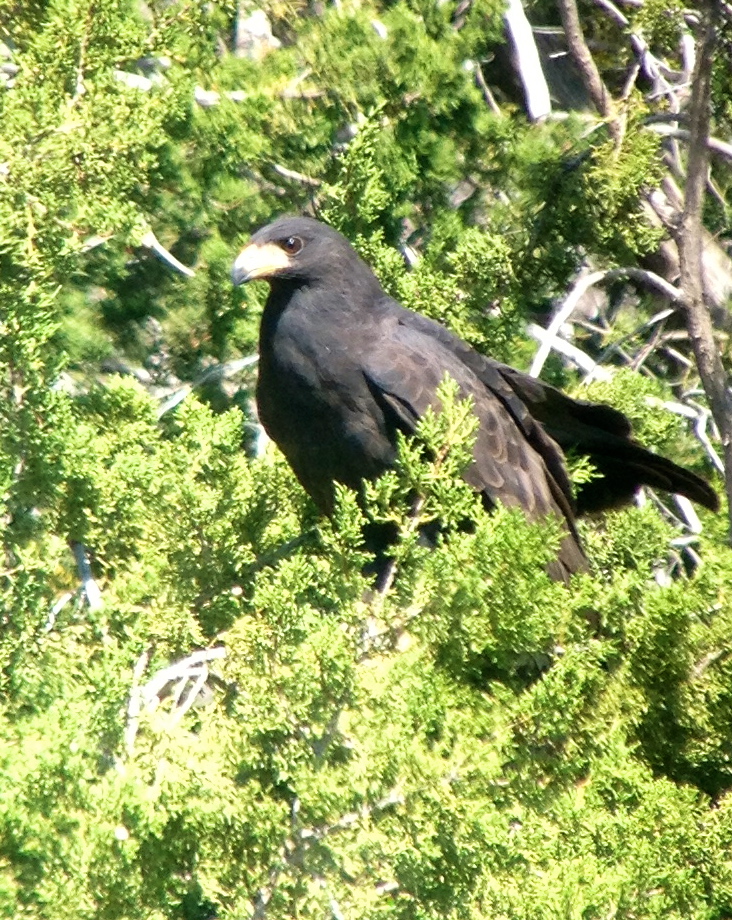 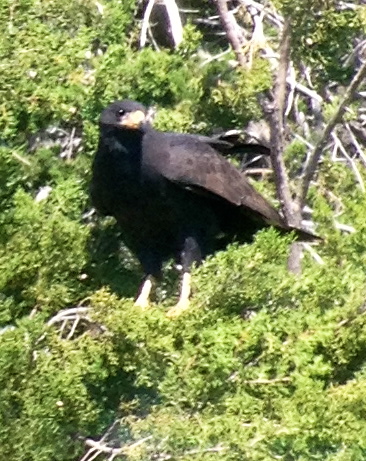 It was still early enough to make it to Tucson before night, and thus check out Sweetwater Wetlands. I'd seen most of the regulars here in January, but Lesser Nighthawks should just be returning, and feeding over the recharge pools. I arrived with an hour to spare before sunset, which I spent running (futilely) away from the many insects, almost stepping on a snake (long, black with white bands), and reminding myself what Yellow Warblers sound like (there were many singing.) At 7:06, as the sun was setting, the Lesser Nighthawk show began - suddently appearing from nowhere. First 2, then 4, then at least 12, fluttering and hawking insects in the evening sky. Compared to Common Nighthawks the wings are obviously less pointed (their outer primary feather [p10] is shorter than the next one in [p9]), and the white bar on the wings is much closer to the end of the wing. They were silent - unlike the continually beeping Common Nighthawks that are so familiar back home over Fenway Park.

A great start to the trip - I also got Western Tanager and Cassin's Kingbird at Beeline. As well as Zone-tailed Hawk, my other miss was Violet-green Swallow - which I should pick up later fairly easily.

I'm staying in Green Valley, and heading up Madera Canyon tomorrow. That's a big birding mecca, and should be dripping with birds...