Last night's wind storm was a walk in the park compared to the howling monster I woke up to this morning. This was bad news. Potentially very bad news as I was going up the top of a mountain! My targets were two warblers - Olive and Virginia's, which I hoped wouldn't be hunkered down from the storm and hard to find.

I started the long, slow climb up the hairpin road of Mount Lemmon. The ridge overlooks the city of Tucson, and is a favorite recreational area for locals - with picnic and camping sites, and even a ski resort open in the winter. As I gained elevation, I noted that the wind was waning - a good sign. As I was getting near the top, I spotted a Turkey Vulture coasting over the road. I remembered that I needed to check TVs for the possibility of Zone-tailed Hawk, which are almost perfect TV mimics. Even before I got the binoculars on this bird (having first, and importantly, stopped the car) I could tell the tail shape was wrong for a Turkey Vulture. Better looks revealed the banded tail, and the barring on the wings (solid white/gray in TVs.) Zone-tailed Hawk! After missing them at Beeline Road, all the way north of Phoenix, I was very happy to finally track this bird down. And yes - it flew exactly like a Turkey Vulture. I would catch up with this, or another, bird again later in the day at Marshall Gulch.

As I was admiring the hawk, I started hearing calls on the side of the road. Calls that sounded like Olive Warblers. After letting the hawk disappear out of sight, I paid more attention to these calls, and quickly located a pair of Olive Warblers. The pair looked like a female (yellow head) and a washed-out, scruffy one that was presumably a young bird. With a list of sites ready to check for this bird, it was great finding it so quickly on the side of the road.

Virginia's Warbler was not as easy. I tried many stops, including Marshall Gulch, and couldn't find one. My last alternative was Incinerator Ridge, an unpaved, unmaintained road. With some trepidation I started driving up the rocky road, afraid (yet again) that my car wouldn't make it and I'd be stranded some place from where rescue wouldn't be an (easy) option.  I parked before the end, and walked the rest of the trail. I soon came across an almost bare hillside, opened up from a forest fire. Small, stunted oaks were taking advantage of the resultant light, and it was here that I heard the song of the Virginia's Warbler. I waited, and finally got good views of a single bird - obvious eye-ring, gray body, and yellow under-tail coverts. Success! Despite the wind, I'd had a very successful morning up Mt Lemmon.

I headed south for Patagonia - to check out the Paton's feeders, as well as try for Thick-billed Kingbird (a bird similar to the Gray Kingbird - but hopefully not similar in requiring multiple attempts to find.) Arriving at the Paton's I quickly spotted a Violet-crowned Hummingbird at one of the feeders. This is an uncommon bird, and the Paton's is the only reliable spot for them. They're big, and, for a hummer, unusual in having a white underside. 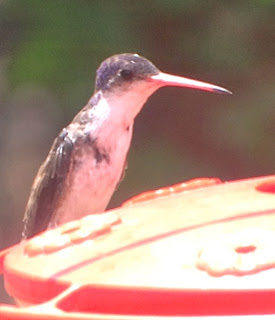 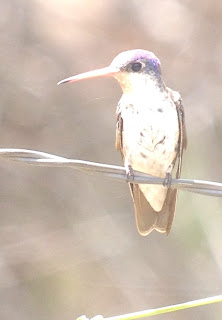 Violet-crowned Hummingbird.
A specialty of the Paton's yard in Patagonia.

The rest of the yard was hopping with birds - including Yellow-breasted Chat, which I'd already seen in several places in AZ. Chats are much, much harder in the north, where they skulk and are very easily missed. At least, I'd missed many that I'd chased. Clearly, they feel a lot more confident and less self-conscious in the heat of the south. Equally colorful were a pair of acrobatic Summer Tanagers. 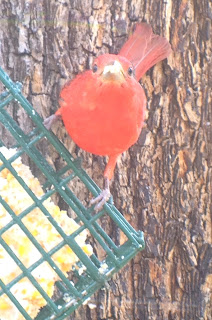 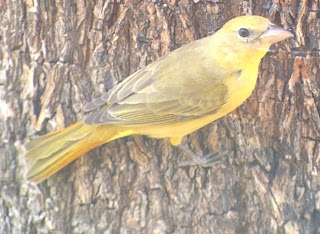 Next up was the Thick-billed Kingbird. Like many of the Arizona specialties, this bird is found in just a tiny part of the state (and thus the US), and Patagonia is one of the best places to find them. It's still early in the year - most of them arrive from mid-May, but there'd been a report at Harshaw Creek Road for the past few days. An hour of searching in the heat of the mid-day however produced none. This bird was behaving exactly like the Gray Kingbirds in Florida - I'd have to work at this one.

I wanted to spend the rest of the day back in the Huachucas - the sky island to the west of the Santa Rita's. I went back to Huachuca Canyon (through the army base) for another try at Northern Pygmy-owl. And missed it again. It was getting late, and I wanted to be at Ash Canyon for the Lucifer Hummingbird, which had been frequenting the feeders late in the day (yesterday the bird only turned up for 5 seconds after sunset at 7:10pm!) When it does come in, it's an easy bird to identify - it has an obvious decurved bill. 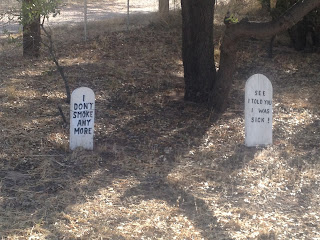 I got to Ash Canyon a couple of hours before sunset, and found a small group of attendant birders waiting for the hummer. It's great yard to sit and wait in - a testament to the hard work of the owner, Mary Jo - and there were lots of birds to check through as we waited for the hummer (Lark Sparrow, Indigo and Lazuli Buntings, Scott's Oriole, Broad-billed and Magnificent Hummer, Black-headed Grosbeaks and the resident Turkeys.) The hummer numbers are apparently down over the past couple of years - possibly due to the fire, which has opened up the canyon floor to more flowers, providing a (natural!) alternative to the plastic feeders of sugar water. 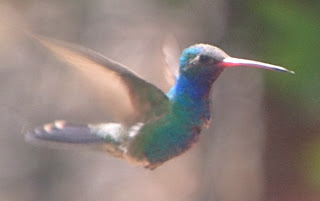 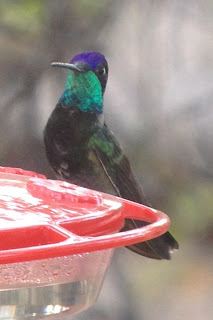 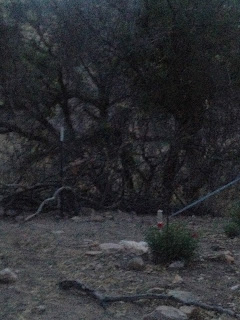 A devil of a bird - no Lucifer tonight.

It was late as I made the drive to the Chiricahuas. It's a long 2 hours through mostly desert, which arcs around the south of the Chiricahua range to my destination at Portal. Thankfully I called ahead and got the last room at the Portal Lodge. They closed at 7pm (!) and left the key to my room under the mat. They also told me to eat before I got there - there probably wouldn't be anywhere open in the nearest 50 miles. This really was a one horse town - where the horse had bolted years ago. The advice about eating before Portal forced me to stop in the delightful town of Bisbee. Main Street here is an architectural delight of Victoriana - especially the hotel and theater. I enjoyed some great pizza and local beer at the Screaming Banshee Pizza, before heading back on the road. After passing through Douglas the road really opened up to the desert. This really was "out there", and I noticed that I wasn't passing any cars. A quick check on the map revealed no gas stations at Portal or anywhere near Portal. Concerned about running out of gas and not making it back out of Portal, I turned the car round, and headed back to Douglas to fill up.

I didn't get to Portal until midnight. The tiny town was hidden in the blanketing darkness, although the night sky was impressively pulsating with stars. I drove round some of the dirt roads listening for Common Poorwill with no success, and headed to the lodge to sleep. There are (obvious in the light of day) two parking lots to the lodge. There's one large one, in front of a row of cabin-like rooms, and a small one, from which the latter are obscured. If you arrive in the middle of the night, I recommend not parking in the small parking lot. Doing so generates a mild panic over not finding your room, wondering if all the rooms are actually inside the shop (the "lodge" is the town shop, hotel and restaurant) and stumbling about aimlessly through dark snake country. I finally succeeded in finding my room, and flopped down onto the bed.