There are good birding days, when you see lots of birds you want to see. There are great birding days, when you see some really unusual birds. And there are awesome birding days when you find something great yourself. And then there are the many, many days when the birding is slow, and the effort is large. Which, I guess, keeps us coming back for more (sensible "normal" people - non-birders - give up at this point and find a more consistently-rewarding hobby.) Today was one of those slow days.

It started well however - I headed to the famous Jasper's. It's famous as a house with a feeder station in the middle of the desert. And now famous for not being Jasper's - but Bob's - even though Jasper is no longer there, and Bob would probably it rather be called Bob's. But it's not.

Jasper's was my location for Band-tailed Pigeon. This is a summer breeder, that lives up in the forest. They've learned to make the daily trek out over the desert to find the feeders. When they find the feeders, they completely empty them. Which makes them unpopular with Bob. And probably did too with Jasper. Despite their prodigious appetite, they're quite skittish - as soon as humans enter the yard, they fly off. Their return is gradual - flying into ever closer trees before committing to the resulting feeding frenzy. 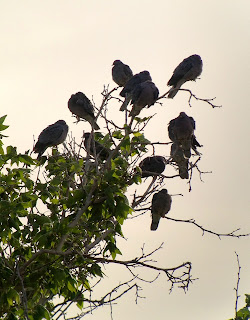 Birds that actually were in the yard included these funny Gambel's Quail - that roamed the back of the feeders, and then climbed up into the trees... 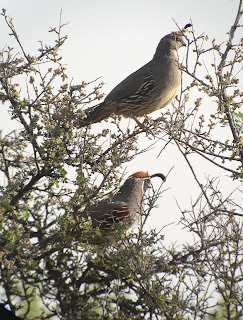 Gambell's Quail
Gaining some elevation for a better view of the feeders.
Male (below) and female (above) both have distinctive plumes.

and Black-throated Sparrows - I love the subtle facial patterning of the black and gray... 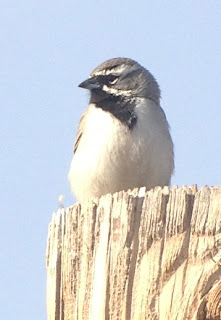 ... and a Western Wood-pewee was a new Year Bird! 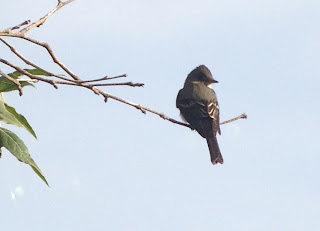 Oh - and did I mention how stunning the scenery is here? After arriving in the middle of the night, it was amazing awakening this morning, and finding this... 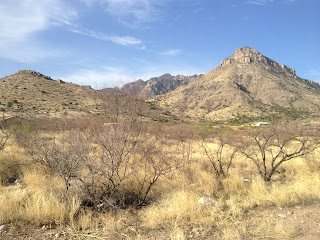 After Bob's I headed up Cave Creek Canyon, the entrance to the massive Chiricahua mountains. The desert mesquite quickly yields to the more succulent forest of the canyon valley. One of my target birds here was the Crescent-chested Warbler - a very rare bird originally found a week ago, but not seen since. Until one report yesterday. The bird had been frequenting an area in South Fork directly up- and down-stream from "the bridge". I had a rough mental map of the area, and drove up the creek. It wasn't long before I met two birders in the road, looking up into the trees next to a bridge. They were looking for the Warbler too. I parked and joined them (mentally noting that the bridge was actually in Cave Creek rather than South Fork - so a little sooner than expected.) The next 2 hours were consumed with walking up and down the creek looking for a tiny bird that did not show. But - I did find a Dusky Flycatcher - like the Hammond's but with a very short primary projection, and a different call note, "wit." And my first Blue-throated Hummingbird - a female.

I left the two birders still looking for the warbler and drove up further to South Creek, to visit the Southwestern Research Center and then to go higher up for the Mexican Chickadee (a big target bird for the Chiricahuas - which is the only place in AZ - and the US - where these birds are found.) After about half a mile I started seeing cars parked along the road. Lots of them. There were also birders. I parked, got out, and walked up to the nearest birder to ask the habitual, "anything good around?" when I saw a bridge in the background. "The" bridge. I'd spent 2 hours at the wrong bridge! I should have relied on my map, rather than trusting a pair of visiting birders. This wasn't the first, and won't be the last, time that I've chased a bird at what I thought was the right place, only to discover later that I was in totally the wrong area. Giving up birding is probably the best way to avoid this problem.

The "good news" was that I hadn't actually missed the bird. With this many people searching for so long, I figured the bird wasn't showing, so didn't stick around. I had to be up the mountains looking for Chickadees. This used to be a lot easier when there were more trees. A devastating forest fire in 2011 burned through much of the mountain range, leaving only pockets of Douglas Firs. I spent a couple of hours driving up and down the steep mountain roads (unpaved) listening where there were trees. Apart from a few warblers, there were no Chickadees. It was probably too late in the day for them to sing, and again cursed the waste of time at the wrong bridge. This was a painful miss. If I wanted to see this bird again, I'd have to make the long trek back out here again.

On the way down, I visited the Northwestern Research Center. They were banding hummingbirds. It was a real treat to see these diminutive guys in the hand. Hummers are just so freaking cute, with personalities far larger than their tiny form. 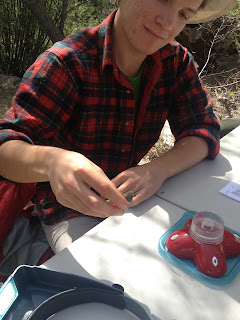 Banding hummingbirds. This bander was feeding the bird by
placing the bill inside the feeder hole. Hummers need to feed every 30 mins or so,
as they burn up so much energy zipping around. 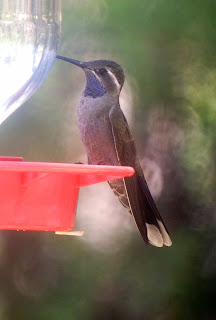 Blue-throated Hummingbird (male) - a specialty of the Chiricahuas.

It was noon, and I wanted to spend the night owling at Mount Lemmon, as well as try for Northern Pygmy-owl again in the Huachucas. I stopped for lunch at Bisbee - which is as cute in the day as it was the night before. This time, however, I could see the huge mine cut into the canyon wall that leads into the old town. Bisbee mine is famous for its turquoise - "Bisbee Blue" - a byproduct from the 19th century mining for copper.


A quick stop in Miller Canyon - and hike up the asthma-inducing trail - led me to a Northern Pygmy-owl nest-hole. I knew this was a Pygmy-owl nest hole as another birder - Tommy DeBardeleben - has a picture of the exact same hole, with the same bark pattern, with a Pygmy-owl looking out of it. My picture (below) is identical to his, minus the owl component - and its really the owl that's the important part of this equation. (Having already ticked "oak" on my imaginary AZ tree list.) 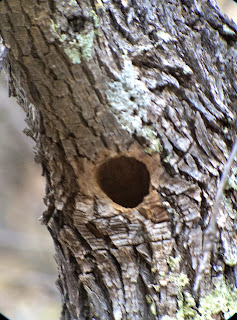 What's missing from this picture?

So - to Tucson and a night of owls. I'd need a flashlight - for seeing all these owls, and to avoid walking off the side of the mountain - which I hadn't packed with me. So I stopped in the HomeDepot in Sierra Vista. I was in a rush, and ran through the store, looking for a sales associate (after much home redecoration I've learned that looking for help and being inside a HomeDepot is a bad combination.) I eventually found someone and asked where the flashlights were. "What kind of project are you going to be doing with it?" What kind of project? Umm…"Looking for owls." That's clearly not in the HomeDepot training manual. He just pointed to a whole aisle of them, and evidently let me decide the salient features of a flashlight "good for all Arizona owl species."


The roads heading north from the southern part of the state have border patrol checkpoints as a further control against illegal immigration. The strategy for getting through these quickly is to say "yes" to "are you a US Citizen?", and, probably more importantly, not looking Mexican. By the end of my trip here I was pretty proficient at both of these. 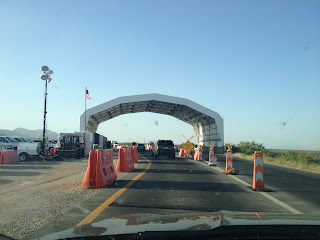 As I was driving to Tucson, a report came in that the Heermann's Gull (a very rare species for AZ and rarely found away from the Pacific Coast) found earlier that day was still present at Kennedy Lake. It was still light. I could probably make it there (West Tucson) before dark and heading up Mt Lemmon. Arriving at the lake (popular with fishermen and picnickers) at 6:30pm I quickly located the gull flying over the SE corner. It helped that, in a state where gulls are very uncommon, it was the only gull present. Heermann's Gulls are beautiful. And odd: they're unlike all other N. American gulls in having a dark adult plumage (most gulls are white and gray). This bird looked to be an adult in winter plumage, with a dark head (in summer, the head turns white, which stands out dramatically against the dark body.) This was an unexpected year tick - one I'd probably find in CA - but happy to see it now, especially in AZ.


Mt Lemmon is a long, winding and precipitous drive. It's scary enough during the day, and I wasn't looking forward to negotiating the hairpin turns on the way down. I tried a couple of spots, but the wind was so noisy, and the traffic so busy (it's much quieter - and better - to try during the week) that I could hear very little. During a rare break in the noise, I did hear a soft, "hoot" - a Flammulated Owl. I never heard it again, and it was an unsatisfying introduction to this secretive, high-elevation species. I survived the drive down, and drove the hour to Green Valley, where I quickly passed out on the bed (after - *importantly* - setting multiple alarms for the next morning.)