It's been a long and fantastic day of birding. Which means - in the interests of sleep and finding some dinner, this post isn't going to be descriptive!

I spent all morning at Madera Canyon - gradually working my way up from the grasslands of Proctor Road, to the high-altitude riparian woodlands of the Upper Canyon. I arrived before the birds. At least, at 5:30, not many of the birds seemed to have woken up. It's rare that I ever get up before them, and instantly regretted my ill-timed enthusiasm. Slowly, as the sun rose above the canyon edge, I started to hear the unfamiliar calls: Rufous-crowned Sparrow (parking lot); Summer Tanagers, Dusky-capped and Brown-crested Flycatchers, Lucy's, Hermit, Wilson's and Townsend's Warblers - even a Yellow-breasted Chat. Probably the most exciting locally was the crisp White-throated Sparrow - quite unusual here. 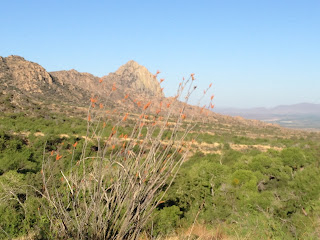 I moved up canyon, and was stopped by the calling of a raptor - the Gray Hawk. One bird was sitting on a nest (hawks on nests seems to be a recurring theme) while this bird was bringing building material... 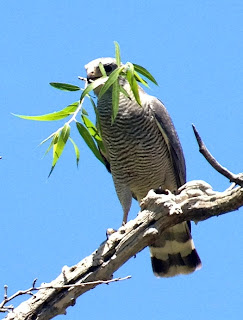 Santa Rita Lodge not only has great feeders, but also coffee. You can sit there, in the sun, watching hummingbirds dart around, Mexican Jays chatting to each other, and Black-headed Grosbeaks all over the feeders - all while caffeinated! 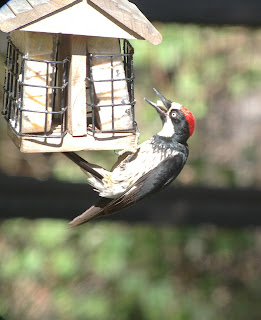 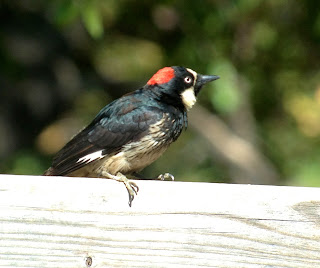 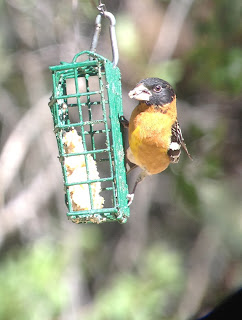 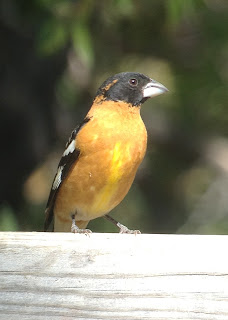 Black-headed Grosbeak - the commonest bird at the feeders. Gorgeous birds! 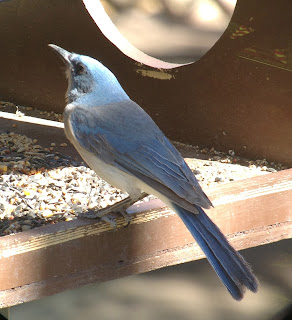 Mexican Jay - much more polite and cheerful than our Blue Jays back home.


At the top - the Upper Canyon - I was being buzzed by a hummer, and realized I was close to it's nest... 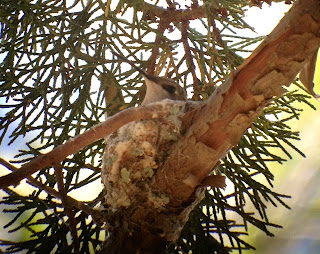 My target of this area was the Elegant Trogon, which is bright green and red. The bad news is that I don't have any photos (you'll have to Google one) - the good news, I saw one! There was a small party that was almost continually calling to each other. I saw one fly, land twice, and just as I got my scope on it, fly off again. They sound a bit like an aggressive Mangrove Cuckoo, or a pack of distant yapping dogs. This was an important bird, and I was very happy to see it! Also exciting was the Red-faced Warbler on the way down.

I headed over to Florida Canyon (stress on the -ri- syllable) next, which is a neighboring, and much smaller, canyon than Madera. I was here in Jan for the Rufous-capped Warbler, and was happy to be back. By noon however, pretty much everything was dead - no movement and no songs. Except for the bouncing-ball call of a Northern Beardless-tyrannulet... 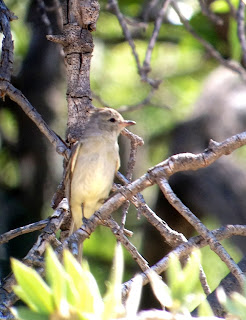 It was early afternoon, and I thought I head to California Gulch for the Five-striped Sparrow. This is a very rare sparrow, that's essentially a Mexican bird. It's only found in one canyon in the US, just a couple of miles from the border - and a lot of miles from civilization. Getting there is not easy - at least 15 miles from the nearest paved road. Feeling safe while you're there is even harder - this is a major route for illegal immigration into the US. On the bone-jarring dirt roads that take you there, you're likely to be passed by speeding border control vehicles, and possibly by very parched Mexicans. 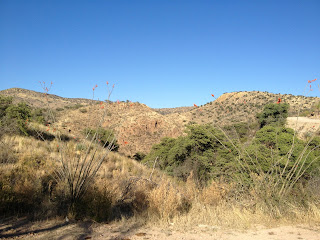 California Gulch - a deep ravine between the nearest hillsides and the furthest.
(Notice the lovely flowering Ocotillo cacti in the foreground.)

It's a steep trek down to the bottom, a narrow ravine flanked by steep and rocky hillsides. This is the favorite habitat of the sparrow. After a 20 min walk along the bottom, I started to see movement on the hillside. Two birds chasing each other. It took a long time before I could get much of a visual on them - these sparrows are notoriously shy (hence the living in the middle of nowhere thing they have going.) Finally, one hopped out, long enough for a couple of photos. 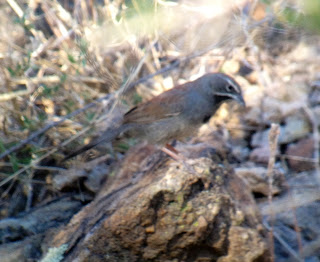 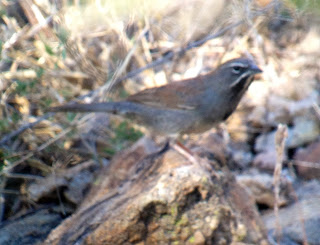 Five-striped Sparrow.
The "five stripes" are the two white stripes above and below the eye,
on each side, and the white chin stripe.

This was a great bird! Mostly for the fact that I don't have to go back to California Gulch again! I was nervous about meeting desperate immigrants, but probably more nervous that I'd get a flat tire, and be stranded in the middle of (a very hot) nowhere.

A fairly long drive to spend the night in Sierra Vista, which means tomorrow I must be exploring the canyons of the Huachuca Mountains. Stay tuned!