A large part of south Texas is, seemingly, owned by the King Ranch - one of the largest, and most historic ranches in the world. It attracts a fair number of tourists from around the world. It also attracts birders - it's famous as the only easily accessible site in the US for Ferruginous Pygmy-owl. This diurnal (active during the day) diminutive owl is a cousin to the very similar Northern Pygmy-owl, with the Ferruginous preferring lower altitudes.  Both have "eye-spots" on the back of their heads, so they can be menacing in a full 360 degrees! And both have a similar tooting call.

The good news about the King Ranch, is that they have tours to see the owl. The bad news is that it's a full-day tour showing you everything else that's there too (which is a lot - including breeding Tropical Parulas and Northern Beardless Tyranulets) - with a price that reflects that. Fortunately, I was the only birder on the tour today, which meant I could focus only on the birds I wanted to see - and leave early with enough time to get back to Austin for my flight tomorrow.

I've had such luck with the weather recently - except the wind storms in AZ - that I'd forgotten it can rain. And in Texas it can really rain! My hour and half drive to the Norias division of the ranch this morning was in almost zero visibility - the rain forming a solid curtain around the car. The tour guide who met me there, Barbara, said she'd never seen rain like this in 2 years - and that it was badly needed. Not by me! Thankfully, and exactly on cue, as soon as we started birding, it stopped. Leaving a muddy ground, and an overcast sky, it would thankfully be the only rain we'd see for the rest of the day.

We started with a search for the owl. The ranch has over 300 pairs of Ferruginous Pygmy-owls - with one pair conveniently located near the entrance gate. The only clue to their presence, among the still leafless knotted oaks, is a tall nest box, sitting on the top of a post about 12 feet high. We quietly circled the tree next to the box - looking for a tiny fluffy ball of a bird. If it was sitting out there, we didn't see it. We did however find a Lesser Nighthawk, cryptically perched on a dead snag… 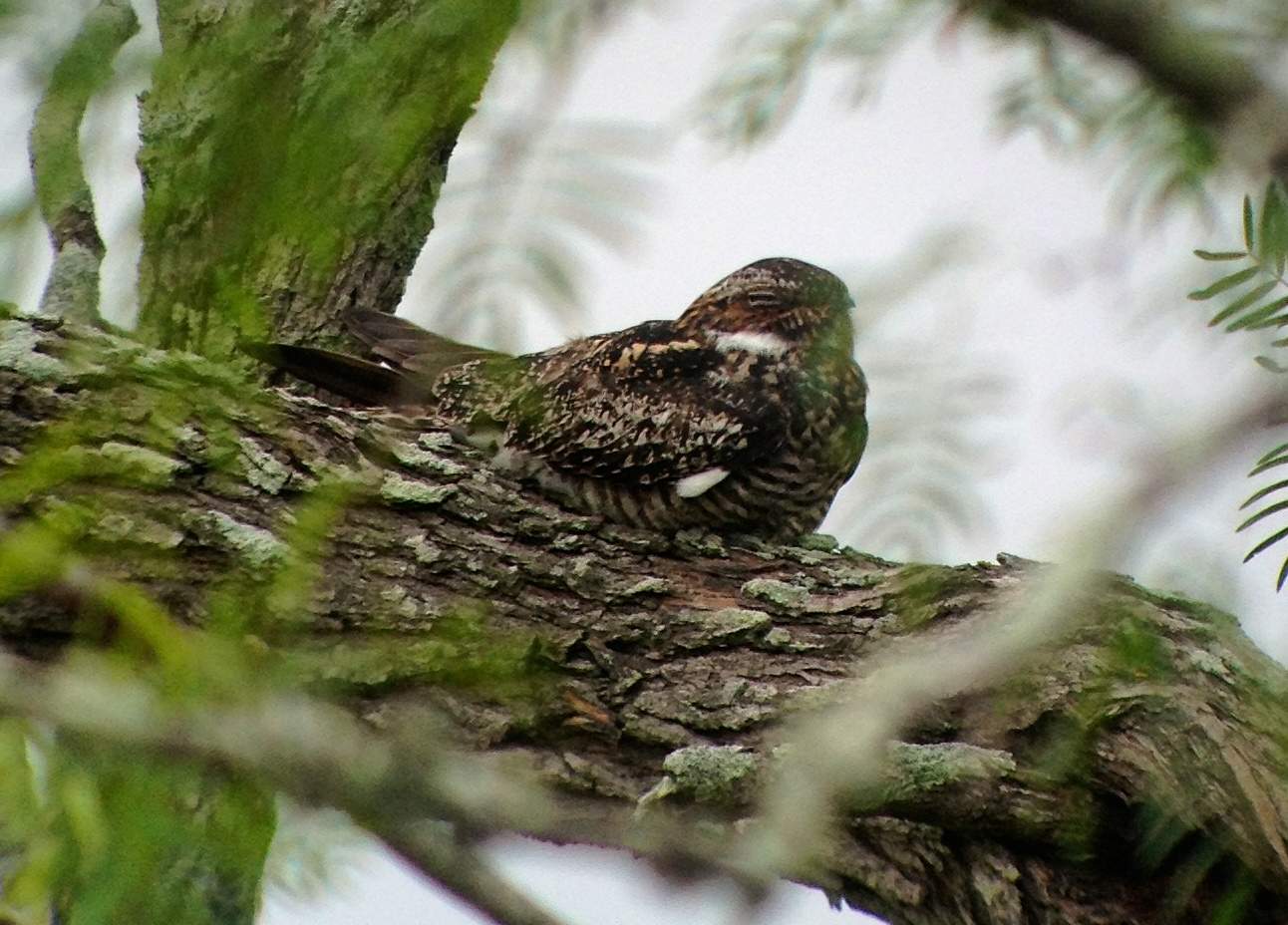 Lesser Nighthawk - can you see me?

We continued into the main ranch-lands, a patchwork of subleased land, mainly used for hunting. After a brief flirtation with exotic animals last century, most of today's hunting is deer, some Nilgai antelope (imported from India) as well as "quail" (Northern Bobwhite - a bird that I would be hunting today - for my year list.)

Mississippi Kite! Barbara slams on the brakes, and we pile out of the van. A single bird is kiting off to our left, showing a banded tail, and the characteristic wing profile, where the second flight feather (P2) is longer than the first (P1) - which, like the Lesser Nighthawk, gives it a more rounded wing shape. This is a good bird! As I'm enjoying it, I'm thankful that I don't have to track these down in the summer - somewhere in the hot south.

"Bob-whek" - a Bobwhite calling. I've missed this bird on so many trips this year. We follow the calls (there are two of them, calling and responding to each other) through the tall grass, but the pair remain hidden. Thankfully, later in the day, we almost run over one, which then stands on the side of the "road" affording us great views.

We arrive at the second owl location. This site is less exposed, sited in a much denser stand of oak trees. There are 3 next boxes in the center, only one of which is being used. The sky is heavily overcast, giving us little light as we carefully scan the trees. Again, we come up short - no fluffy owls. Barbara starts playing a recording of the owl - "toot toot toot toot ...", and almost immediately a red, fluffy head appears from the next box. 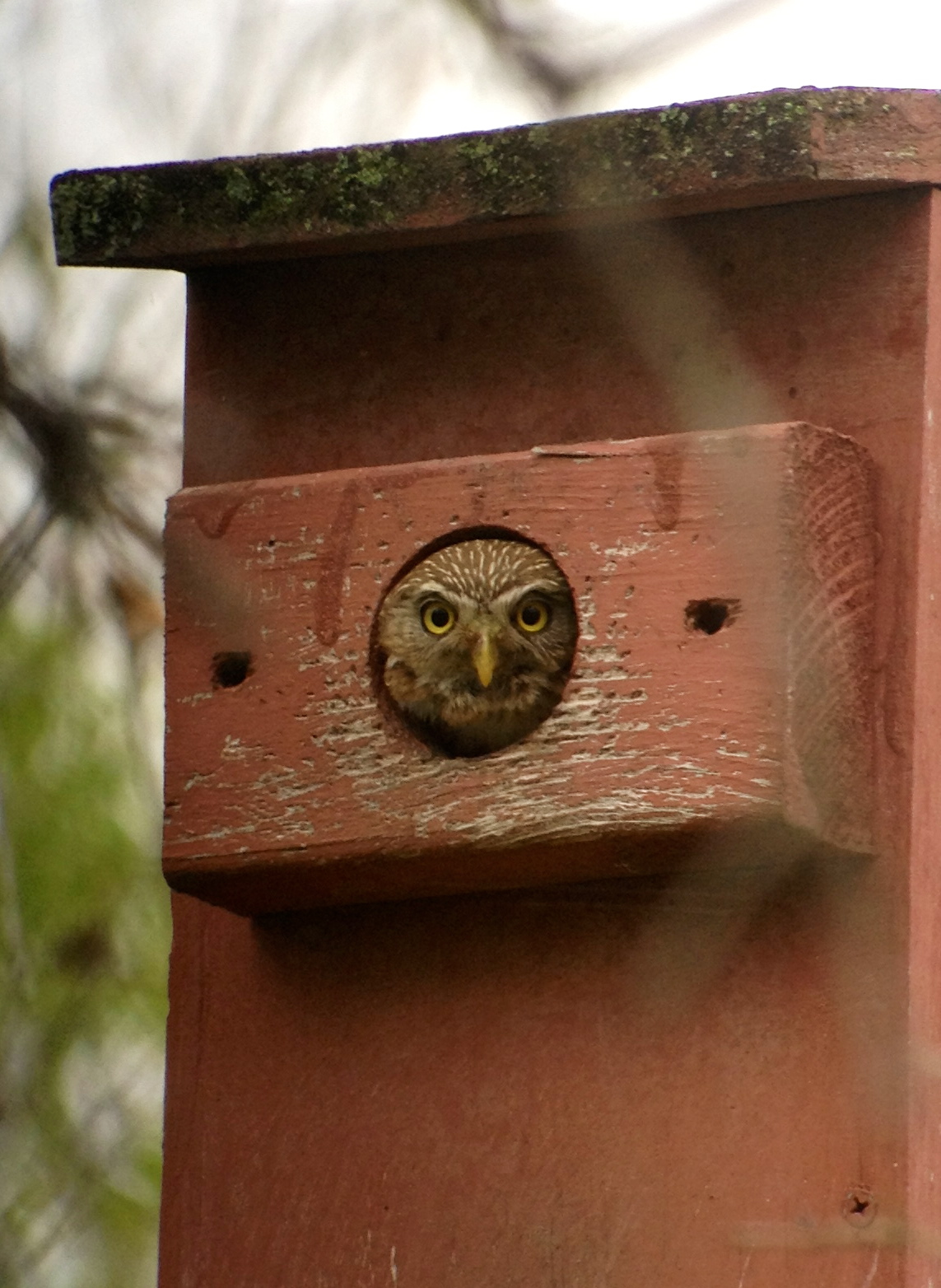 What's going on out there?
Ferruginous Pygmy-owl.

The owl watches us for several minutes before flying out - captured in this video...

With the main target of the day seen, we proceed to a small wetland area near the gulf coast. This small puddle is host to a teeming assembly of shorebirds, as well as a much-needed Gull-billed Tern. 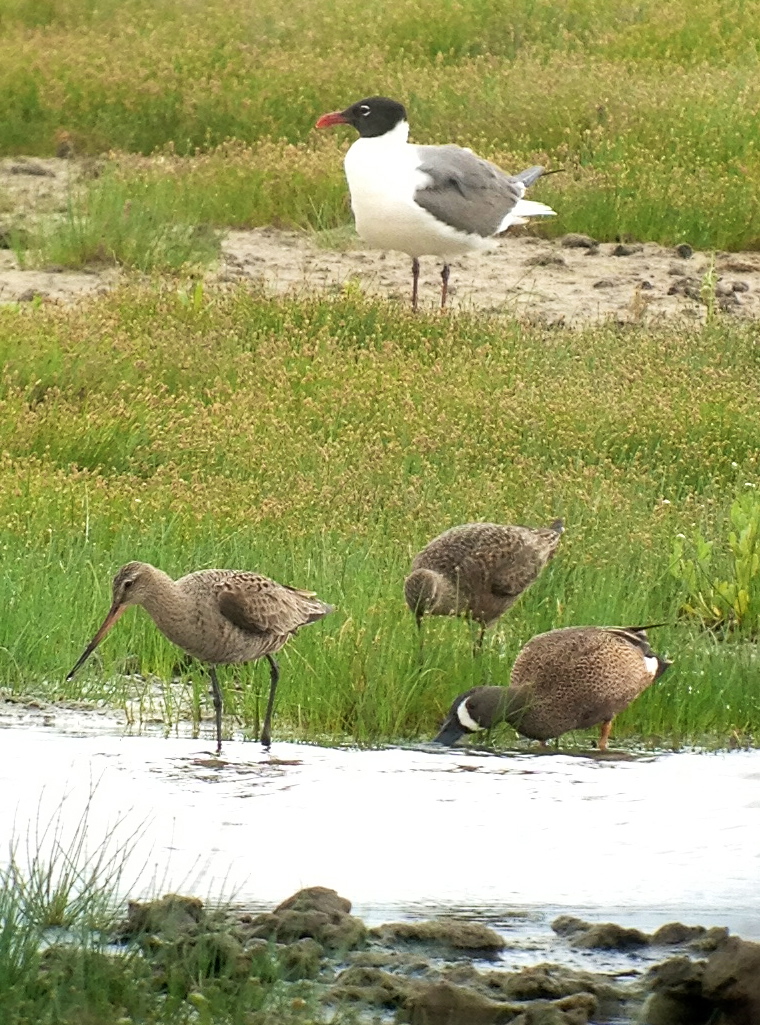 I left the King Ranch at 1pm, which would give me enough time to try (again) for Ringed Kingfisher. This is a bird I'd love to get, otherwise I'd have to make another trip out here before the end of the year. Having tried all the reliable spots for this bird in the Rio Grande Valley, I decided to head back to the Hill Country - to Uvalde, where a pair has been seen regularly feeding at the boat ramp at Chalk Bluffs Park. (This park has hosted a pair of Rufous-capped Warblers, attracting lots of visiting birds, who've noted the Kingfishers in their checklists.) 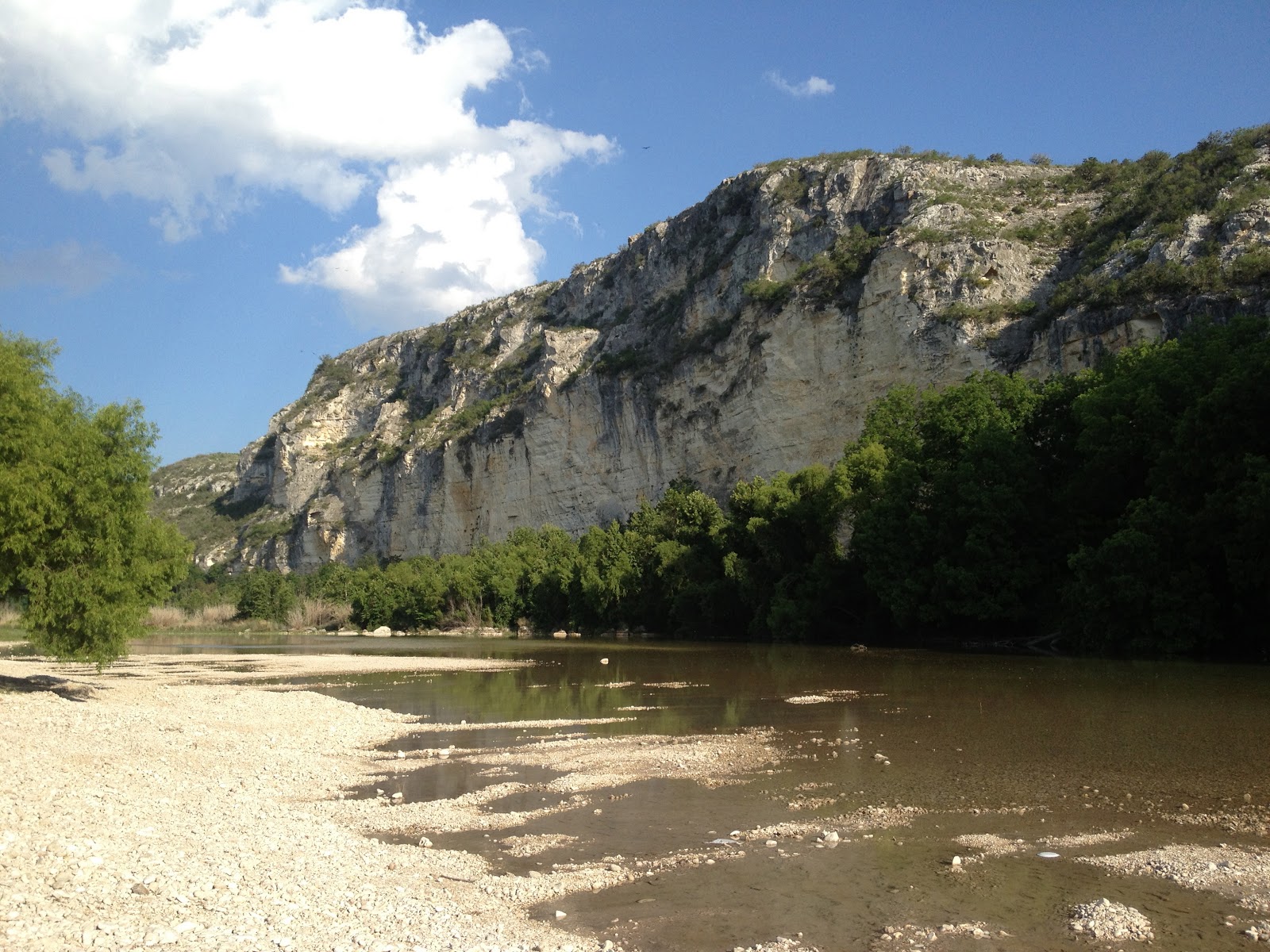 Ninety-eight degrees and four hours later I finally pulled up at the park. It's a lovely spot - the Nueces river carved out from the overlooking cliffs. I had the place to myself - and a small flock of Painted Bunting scavenging on the ground. A few trees on the bank provided some welcome shade in which to sit and wait. The silence was punctuated with tantalizing outbursts of "chack-ack-ack-ack" - which sounded exactly like a Ringed Kingfisher. It was coming from the other side of the river - a dense, thin strip of trees sandwiched between the water and the base of the cliffs. But, I couldn't see a bird. After 90 minutes, I heard the sound again, much nearer - and this time accompanied by a giant kingfisher flying along the middle of the river. Ringed Kingfisher! It turned and landed on the opposite bank. This south Texan specialty is considerably bigger than the widespread Belted Kingfisher - with a much larger bill, and entirely red underparts. 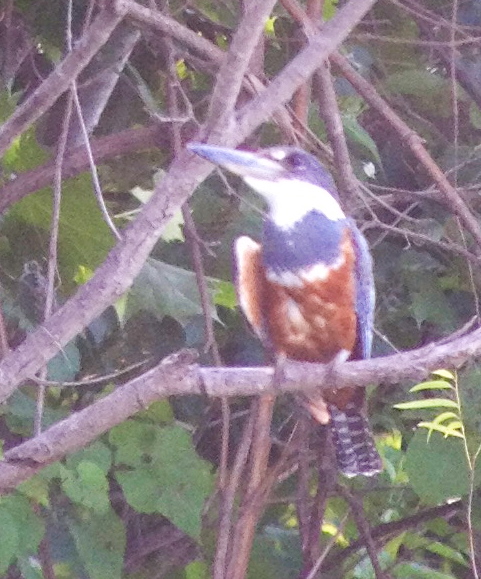 The collar on this bird identifies it as a female.

This would be the last bird on a spectacular foray through Texas that had taken me to the dusty Hill Country, the deserts of West Texas, and the lush forests of the Rio Grande. I'd got an amazing 23 year birds here. As the park ranger at Resaca de la Palma noted about migration, "once you see American Redstarts, it's over."  And, for Texas, it pretty much was. The country was almost full - all the new faces were in, summer migrants here for the short breeding season before heading back "home" for the winter. I'd caught up with a lot of these guys as they migrated through, but, had some misses. Fortunately, migration was still happening further north, giving me a chance to pick up some of these back home in MA: Least Flycatcher, Eastern Whip-poor-will, Olive-sided Flycatcher, Black-billed Cuckoo, Blue-winged Warbler, Cerulean Warbler, Canada Warbler, Mourning Warbler and maybe a stray Kentucky Warbler if I'm lucky.

After arriving in Texas from Florida, I hadn't been home for over a week. I'd covered well over 2,000 miles in 4 days, had hiked up Big Bend, and was completely shattered. I was looking forward to getting home, and spending some time relaxing and catching my breath. But not for long. On Sunday, I'm off to the most remote place I'll have seen this year: the Pribilofs, the far-flung islands in the Bering Sea, off the west coast of Alaska.