The drama and excitement of Adak, of birding in the far-flung Aleutians already seems a distant memory as Gerri and I are walking around Home Depot looking for a Christmas Tree. (Unfortunately, so is everyone else in Boston, and apparently, this is something that can't be done online.) There's a small flock of House Sparrows working their way around the chilly lot, and, like every other flock of birds I've seen this year, I can't help scrutinizing each one for something unusual.

"What about this one?"

As I'm driving home, trying not to strangle myself on the precarious spider-web of string winding through the interior of the car that's hopefully holding a 7-foot Balsam Fir to the roof, I reflect on the change of pace to my big year. At this point, I'm in a holding pattern: waiting for something to turn up. I've been checking NARBA (North American Rare Bird Alert) and state listservs every few minutes. I'm turning into a nervous wreck waiting for my next birding fix. How much more relaxing it was finding our own birds in Alaska!

So - what do I have left for the rest of the year? What birds are still possible?

After cleaning up on McKay's Bunting, Whiskered Auklet and Whooping Crane recently - this category is effectively over. I've seen all the common north American birds (Code 1 and 2) with the exception of Common Ringed Plover. (I didn't go to Gambell in the spring, and I wasn't able to chase the one in MA (!) in May. This is a bird that isn't going to make a winter appearance.)

Improbable - but not wholly impossible (10)

I'm at 742+3, which means I guess it's about time for me to start talking about the ABA Big Year record. I've tried to focus on my own big year, but it's getting harder to do that as I'm closing the gap on Sandy Komito's record of 748 (745+3) set 15 years ago. If the birds turn up, and I can get there fast enough, I could conceivably set a new record. The reason I'm trying not to get *too* excited is that I don't want to feel like I've failed if I don't break the record. Seeing almost 750 birds in one year can't be a failure. Heck, seeing over 600 is pretty darn good. Plus all those wonderful experiences that I've written about here - of far-flung places across this continent. I'm excited to be chasing the record - but that's not why I'm doing a Big Year. (But don't worry - that doesn't mean I'm *not* going to try - I'm committed to chasing everything now until the end of the month.)

I guess I should also start talking about Aplomado Falcon. I've had lots of questions and comments about the countability of this bird. I've seen the bird. John Vanderpoel counted it, somewhat reluctantly, arguing that Sandy did, and so, in the interests of a fair comparison of big year lists, he should do the same. Why the controversy? Well, Aplomado Falcon was essentially extirpated from the US by the 1950s (mainly through habitat loss.) A reintroduction program started in 1993 and birds are still being released today to support this population. The reintroduced birds are not countable by Texas, and thus the ABA (similar to California Condors - the reintroduced birds are not countable.) However, the bird can occur as a natural vagrant (from Mexico), but with so many released birds, it's impossible to tell a genuine (and extremely rare) vagrant from the much more common uncountable birds. Realistically, any Aplomado Falcon is likely to be a released bird or descended from one - and thus not countable. I'm still thinking this one through. It seems odd to include a bird on my big year list but not on my life list. I guess it depends on how close to the record I get! I'm hoping it's not all decided by an Aplomado Falcon!

I'm saved from resolving this mental pondering by the phone...

That's John Puschock calling and he's just put me out of my nervous state of waiting. It feels good to spring back into action - to flex those well-tuned logistic muscles and plan a chase. And as I'm preparing to head out for California, I get news that a White-cheeked Pintail is in Florida - at Pelican Island NWR. This is almost certainly the same bird that I chased *twice* in the spring and missed. Maybe this is my chance for revenge?

Little Bunting is a small bird of the Eurasian taiga, breeding in conifer clearings. And although it would be an ABA life bird for me, I've actually chased and seen one as a kid in the UK. It was coming into a feeder and I was struck by the delicate eye-ring, and the burnished face color. But that was over 20 years ago. It was about time to see another!

It's late when I arrive at Oakland Airport. Late enough for the predictably-bad traffic that snarls around interstate 580 to have unsnarled itself. I'm on the road by 11:30pm. I have 300 miles ahead of me - roughly 6 hours. I make the first 200 miles before I need to pull over and sleep. I've become an expert at reclining the front seat of the car, finding a position that's just about comfortable enough to sleep in, and staying warm when it's in the 30s outside. (A looted US Airways blanket is the secret!)

I'm awoken by my 5 am alarm. Time to get back on the road. It's a dark road that winds through the redwood giants. As the trees encroach on the edges of the fog-draped road it takes all of my concentration to make each turn. I'm leaning forward, inches from the windshield, trying to find the way.

I pull into McKinleyville around 8:30am. The fog is lifting off, revealing a bucolic scene on both sides of Fischer Road - grass, cows, lazy egrets. I can hear the honking of (Cackling) geese in the background, and Killdeer calling and flying around, trying to make up their mind just which side of the road has the greener grass. 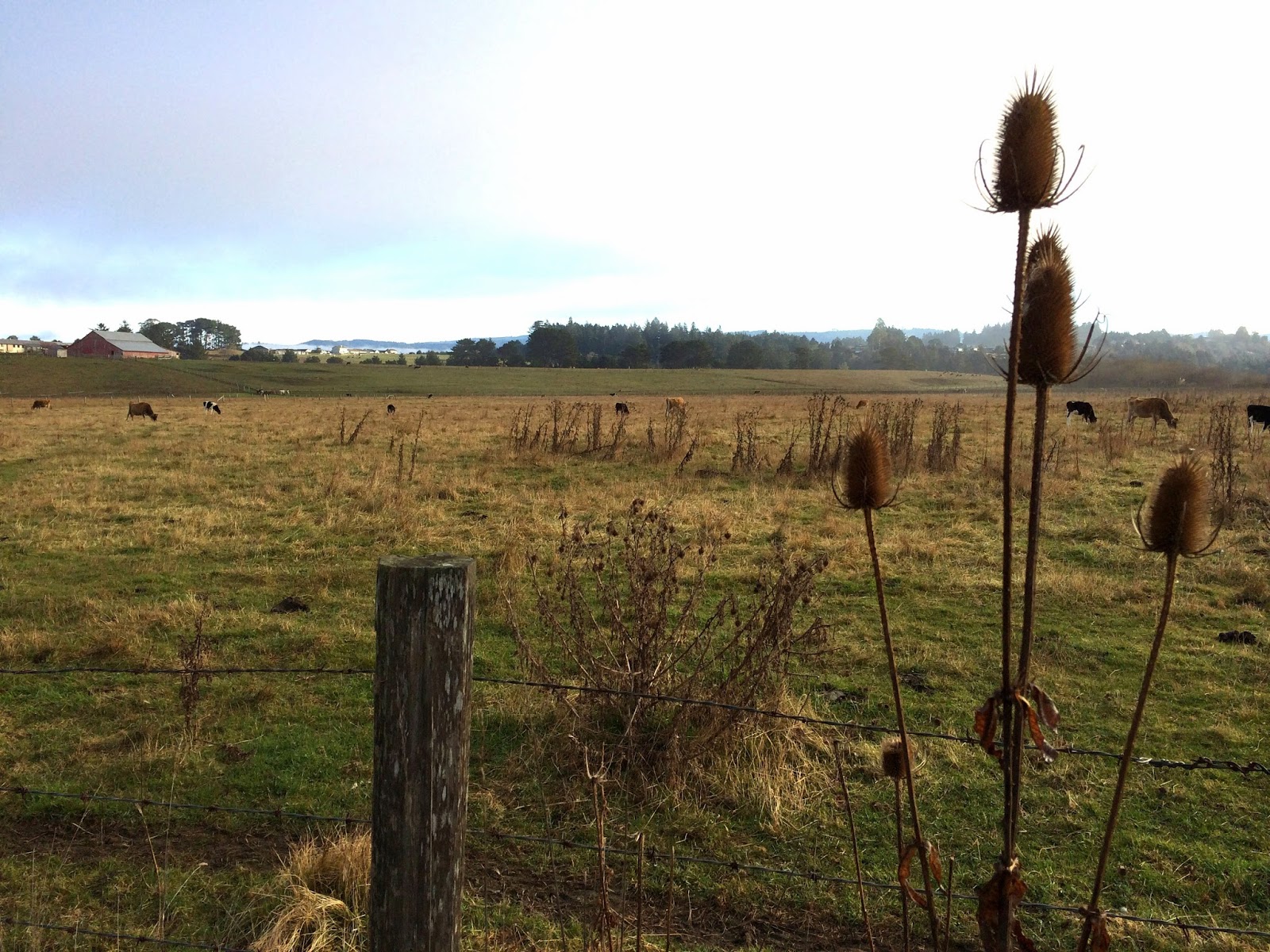 I'm happy to see that there are birders here. And even happier to see that they're all intently  looking in the same direction: the bird must still be here! 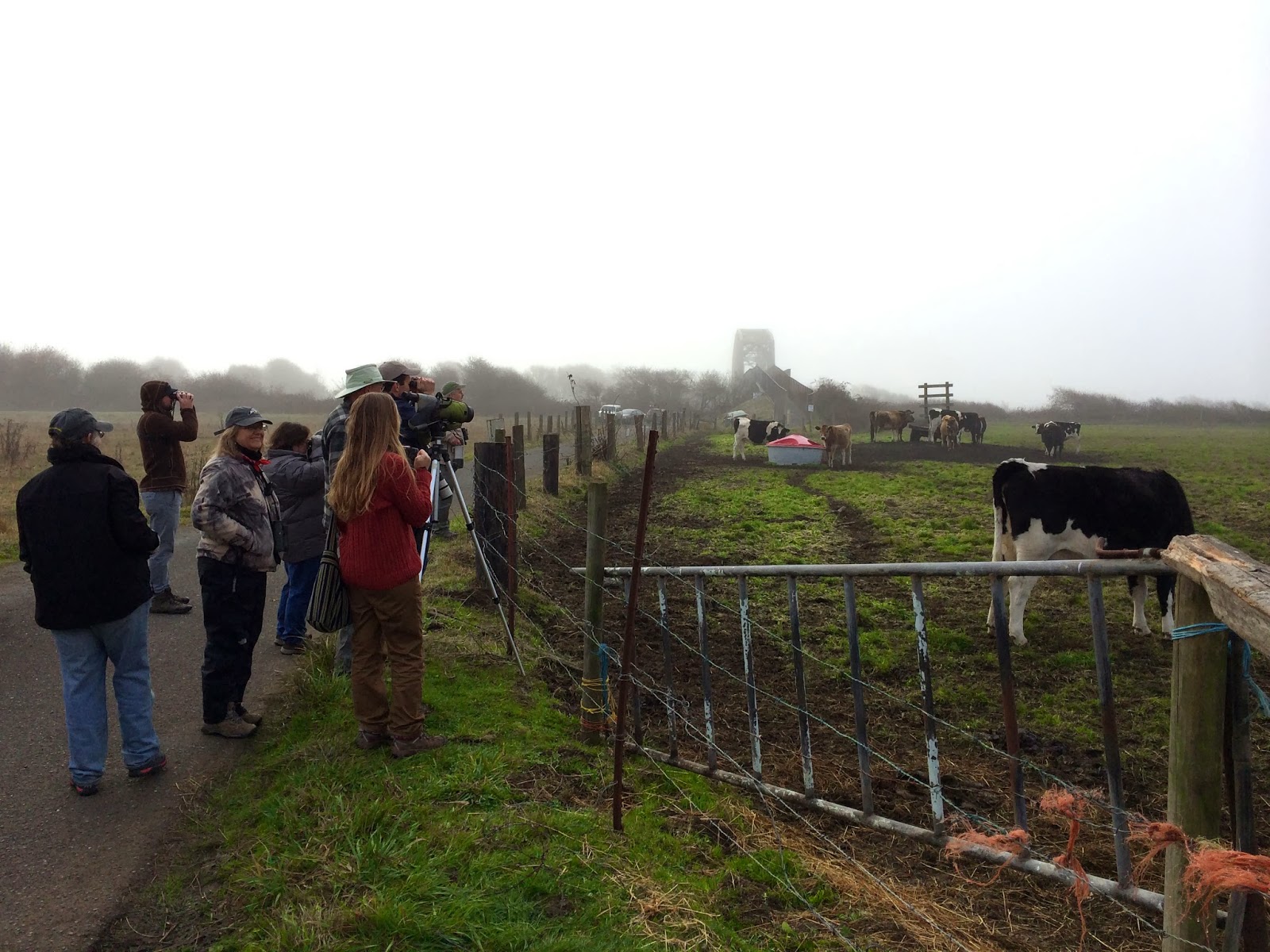 I jump out of the car, and quickly locate the focus of their attention: a small sparrow-like bird with a richly-burned face. It's moving through a thicket of thistles. 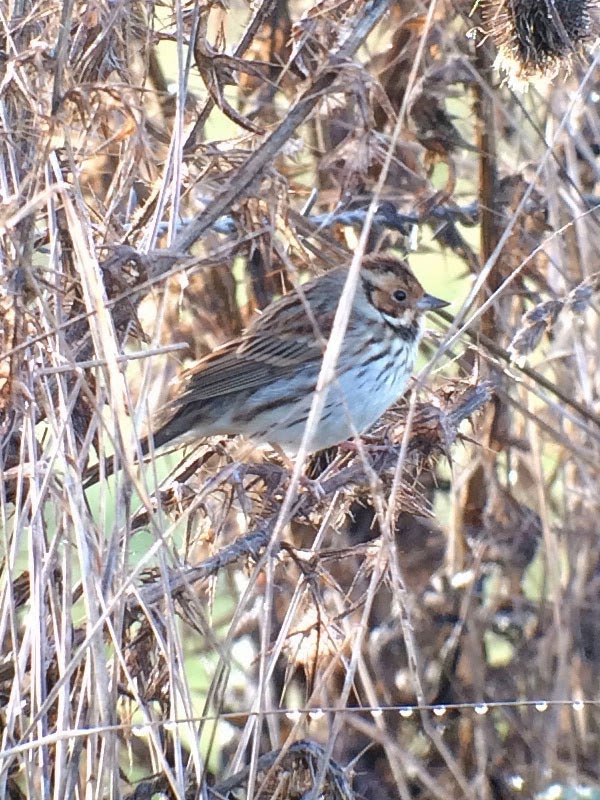 Little Bunting! The bill is long and pointed.
The nape (back of the neck) is gray, like a Clay-colored Sparrow.

It's pretty active, and soon leaps up - emitting a distinctive "zick" -  into the air and circles the field. As I'm wondering if this first view will be all I get, the bird seems to read my mind, banks, and flies back. This time posing on a wire fence: 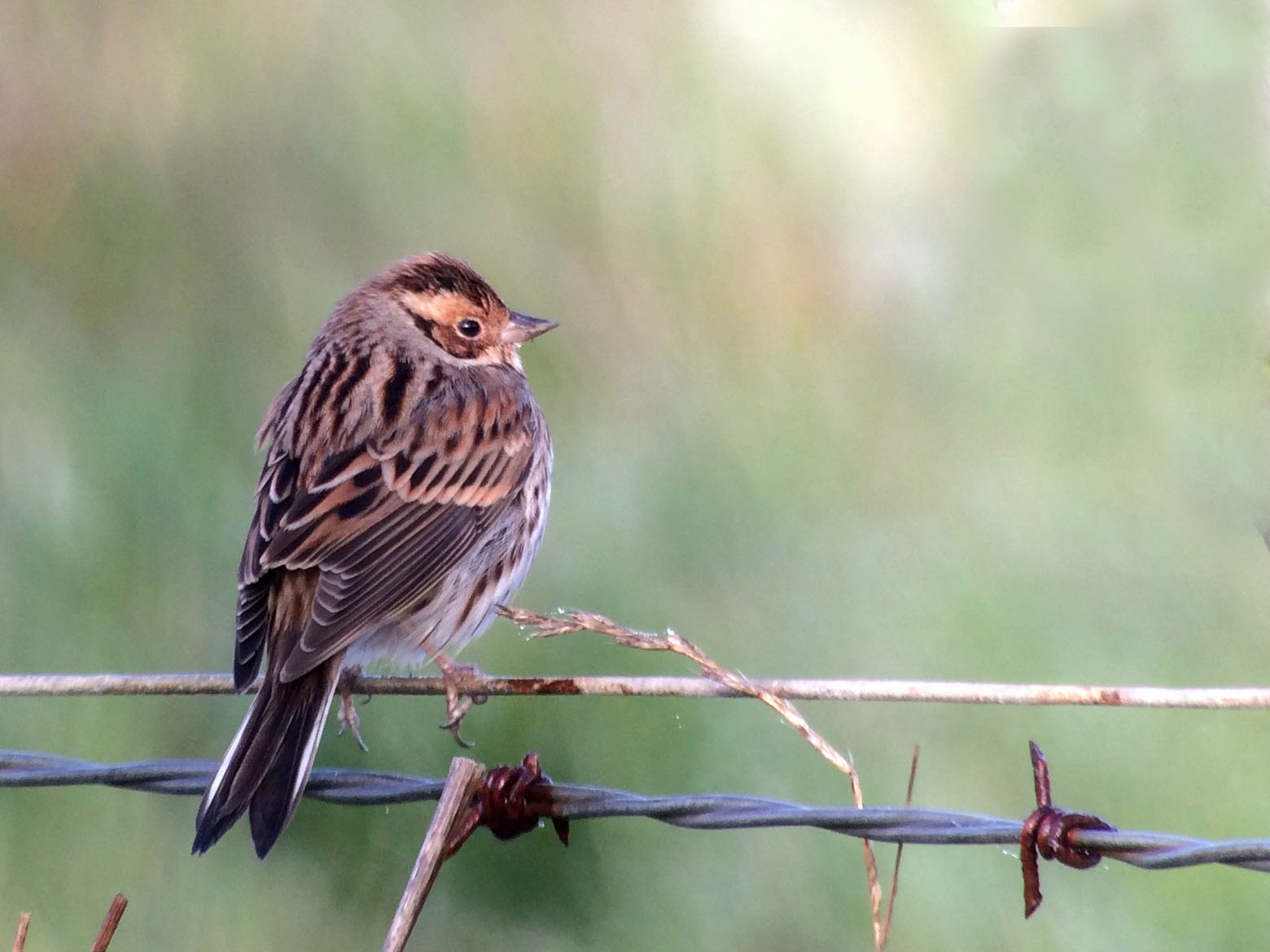 Phew! What an absolutely stunning bird. I'd forgotten just how beautiful they are - and how rich the chestnut wash on the face is.

Although it's always an easier drive back after you've successfully seen a bird, I still had to fight the urge to sleep. Thankfully, I had a lot to think about. I'd received news of a La Sagra's Flycatcher in Florida - one of my "possibles", right on cue! I'm heading to Florida tomorrow morning - now with potentially two birds I need.

And with only 2 weeks left of my big year, the race is on...