PINK AND WHITE IN TEXAS

Except for the bauxite-chewing aluminum factory and its associated body parts of pipes, towers and chimneys, it would be the perfect view: the morning light bouncing off the surprisingly bumpy waves, the sea spraying off the sides of the boat, and in the distant shallows, the shimmering mud flats. It's towards the latter that we're speeding - Jay Allison, the captain of the 22ft boat, and I. Our goal - a couple of large pink birds. Hard to miss, apparently.

This is not where I expected to be today, after arriving in Anchorage on Friday and sheltering from snow in Nome on Sunday. Unplanned perhaps, but happy - yes. I'd been putting feelers out for American Flamingo - a bird I thought I'd still have a chance at this year. And then I received word that the famous mismatched flamingo pair had been spotted hanging out in Cox's Bay, a shallow inlet off Port Lavaca on the Texas Gulf Coast. They'd been seen this weekend. I didn't want to wait until after my Adak trip, and so made the quick dash south for a couple of days.

Jay points the boat in the direction of a couple of large pink dots. And as we approach closer, the dots start developing long necks and legs. Flamingos! Pretty hard to miss... 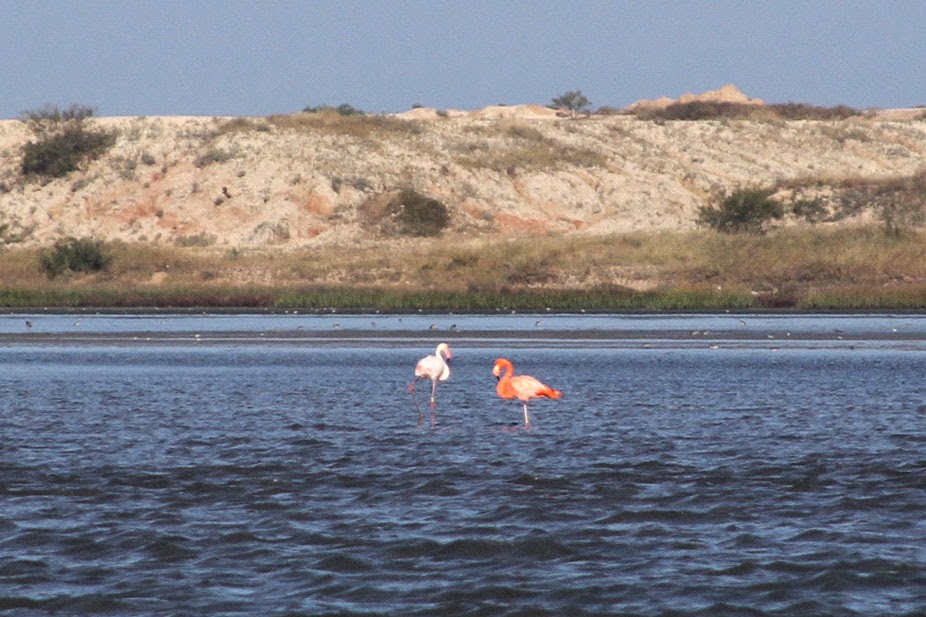 Flamingos on the Texas Gulf Coast! Greater (left) and American (right)
These birds have been reported all along the Gulf Coast since 2006
- from Tampico, Mexico to Louisiana.


These two birds are actually different species. And because both birds are banded we know something about their life histories. One bird is a wild American Flamingo (also known as Caribbean Flamingo) that hatched in 2005 from a flamingo colony at the Rio Lagartos Biosphere Reserve at the northern tip of the Yucatan. (It has a yellow band on its right leg above the knee - "HDNT".) The other bird is the larger and paler Greater Flamingo - an Old World species that breeds in Europe, Africa and Asia. It escaped from Sedgewick County Zoo in Wichita, Kansas on June 27th, 2005 (along with another bird that has not been found.) It also has a yellow band on its right leg - "492". Only the smaller, darker American Flamingo (the one banded in the Yucatan) is countable as a wild bird. 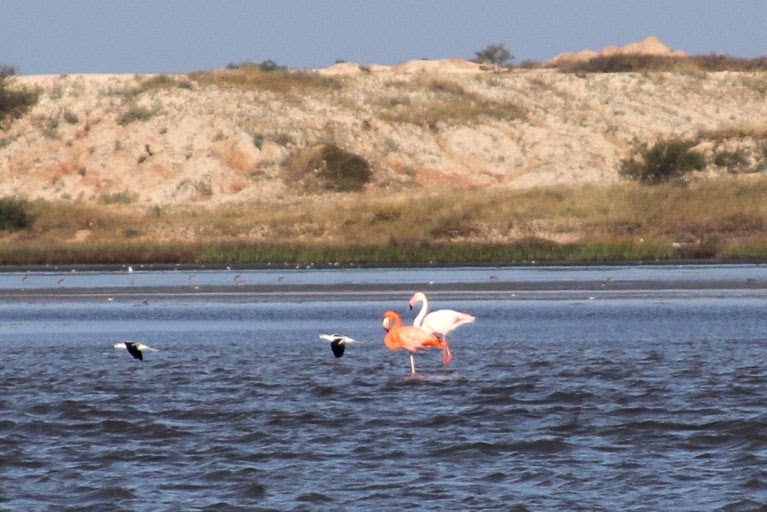 Yes - flamingos really do get their color from their food. They're born with gray feathers,
which become pink through eating foods such as shrimp that are rich in beta carotene.

It's not clear what gender these birds are. The two species are close enough that they could possibly breed, although flamingos typically only do so in colonies. They lay a single egg on the ground, benefiting from the protection afforded by the surrounding birds. (The Yucatan colony has over 20,000 birds!) Flamingos are extremely social birds, which explains why these two lost birds have been hanging out with each other. The Yucatan bird would be 8 years old now - they typically reach sexual maturity at around 6 years and can live 30-40 years and possibly as long as 80 years. Flamingos are monogamous.

I'm very grateful to Jay for taking me out in his boat. These birds are only viewable by boat - they can't be seen from land. Thank you Jay!


My flight back to Alaska isn't until tomorrow. Which gives me enough time to track down the only non-rarity in the Lower 48 that I still need this year - Whooping Crane. And they're only a 40 minute drive away.

Standing 5 feet tall, Whooping Cranes are North America's tallest bird. Unfortunately, they're also one of the rarest. A combination of habitat loss and unregulated hunting reduced an estimated 10,000 birds (when the Europeans first arrived) to only 15 adults by 1938. Facing certain extinction, conservation efforts went into protecting habitat and preventing hunting. It's been successful in stopping the decline. But there are still only a few hundred birds in the wild.

The best place to see these cranes in the US is Aransas, on the Gulf Coast, just north of Corpus Christi. It's here that almost the entire population of Whooping Cranes winters each year, after making the long migration south from their breeding grounds in the muskeg bogs of northern Alberta, Canada. 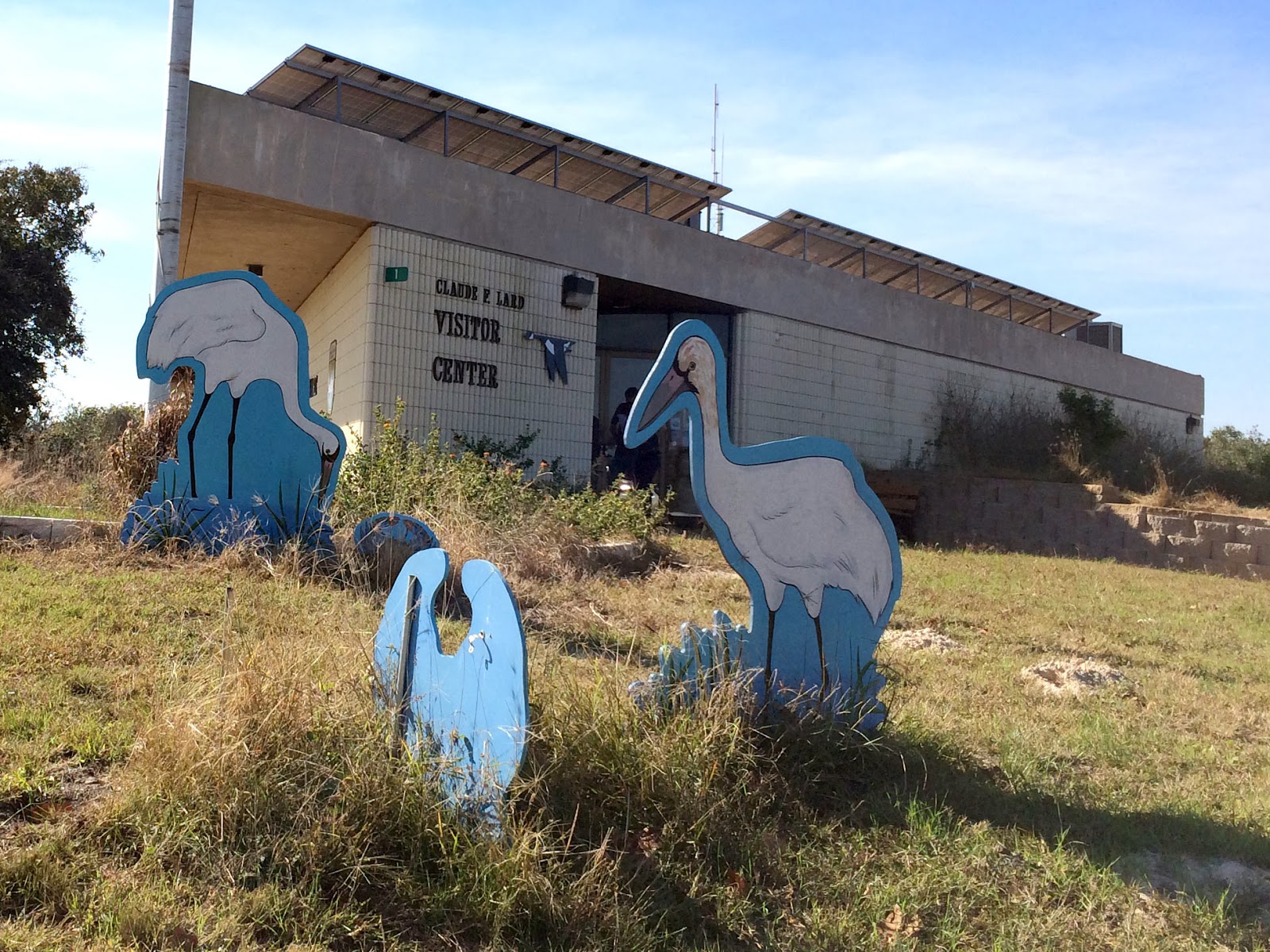 I head out to the Heron Flats trail, where from a viewing platform I can see across the brackish marsh. 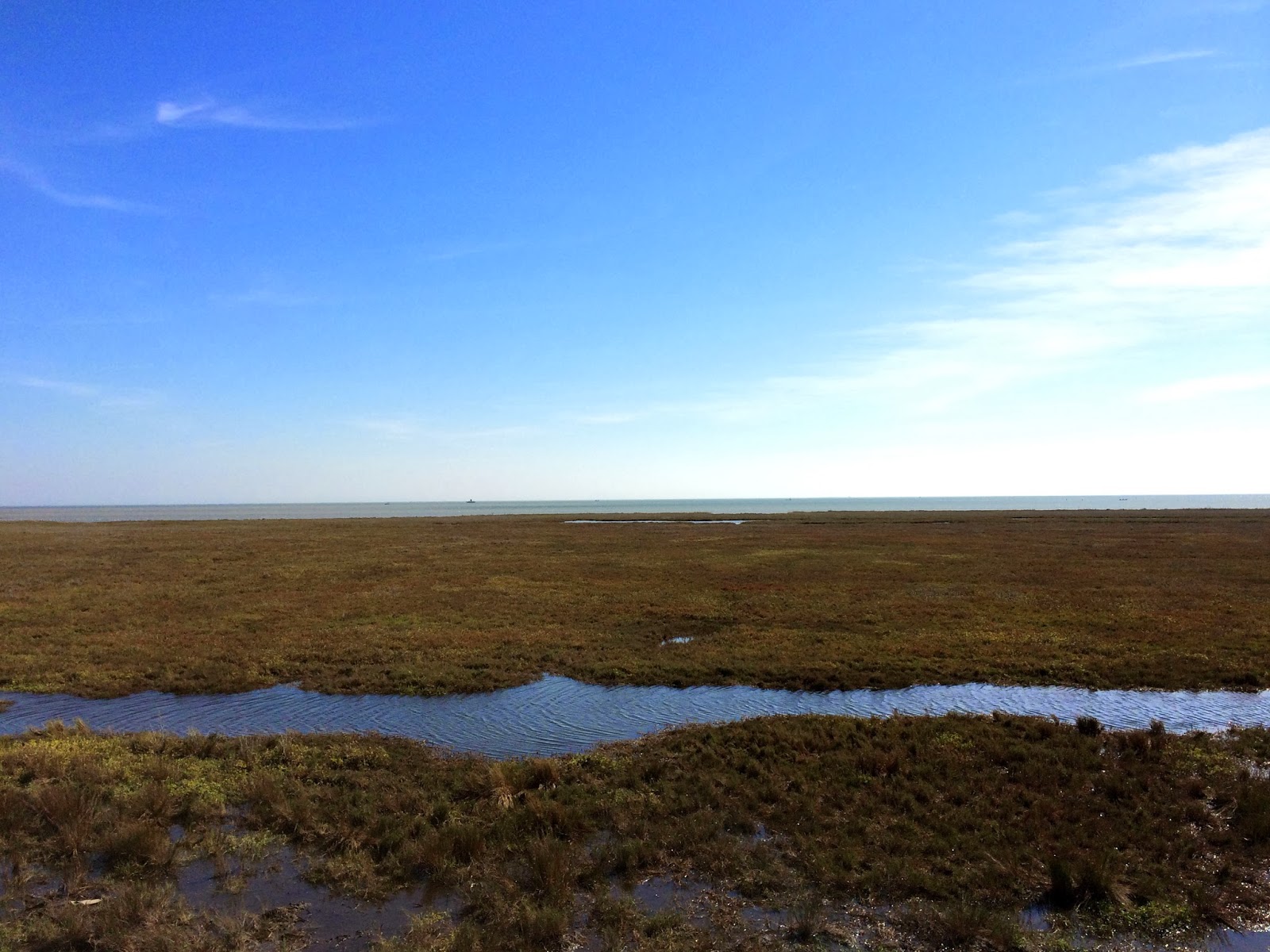 In the distance, I spot a group of cranes - Sandhill Cranes, the other (much more numerous) crane found in North America. But the gray flock of Sandhill Cranes is dwarfed by two large, white birds - Whooping Cranes... 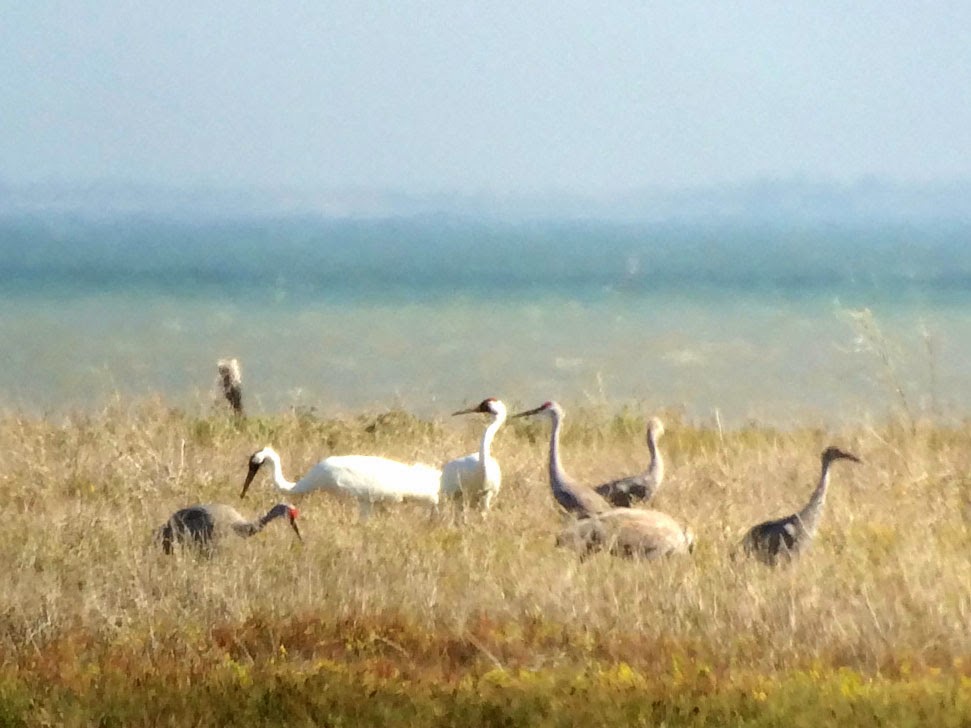 Whooping Cranes - large, white, with black flight feathers, a red crown and black around the face. These birds are much larger than the gray Sandhill Cranes.

Whooping Cranes are no longer banded to keep track of individuals - with such a small population the risks of injuring the birds during capture are too great. Instead, they're "voiceprinted" - their calls are sufficiently unique for conservation biologists to recognize and track individuals. 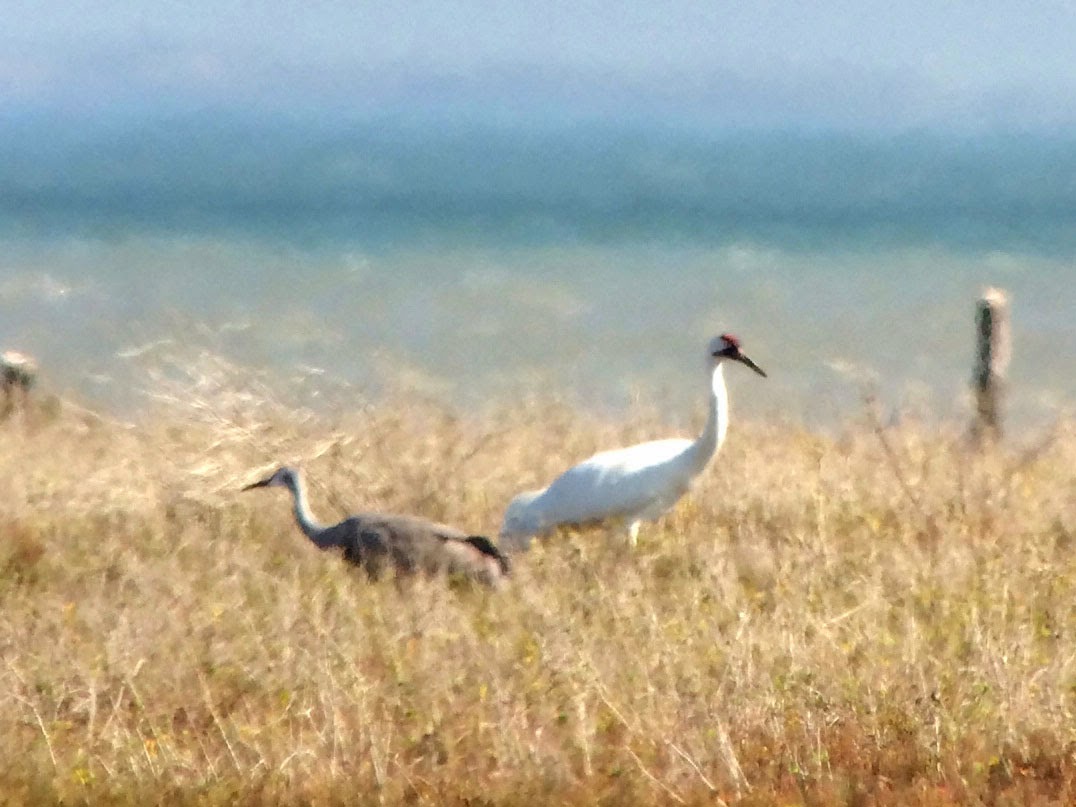 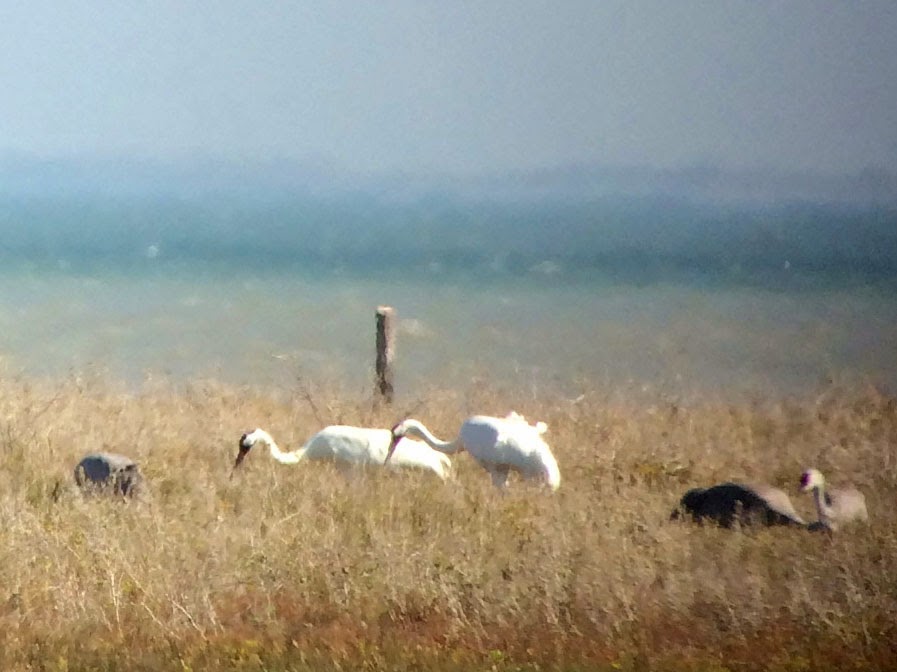 Whooping Cranes are omnivores, though they eat a lot more animal matter than other cranes - including frogs and small birds. Here in Aransas, they're dining on the local delicacy - blue crabs. 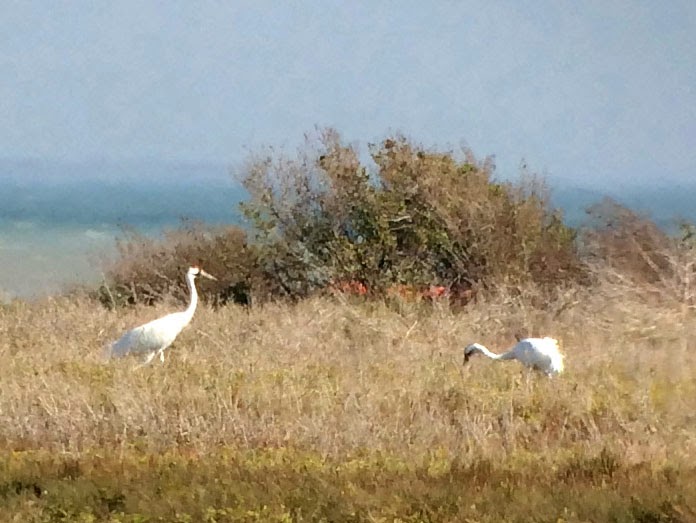 Hey - I think I found a blue crab!

In recent years a new migratory population has been established with breeding grounds in Wisconsin (Necedah NWR) and wintering in Florida. Since this is a completely new migration route, the birds had to be taught where to go. They did so by being trained to follow an ultralight aircraft that then made the WI-FL trip with cranes in tow. Once the adults had learned this, they were able to teach new, young birds. There are about 100 birds in this eastern population. Additional, non-migratory groups have also been established in Florida and Louisiana. Hopefully, with this diversification, Whooping Cranes and their loud iconic honking calls (after which the birds are named) will once again be a familiar sight and sound in this country.

It's been a long time since I've had two new year birds in one day. I'm very glad I had time to leave Alaska to make this quick trip. And as I head back up to San Antonio for the night, I suddenly spot another new bird. I slam on the brakes, and jump out. Thankfully, I don't flush the birds - which adopt a defensive posture, remaining eerily motionless on the grass. 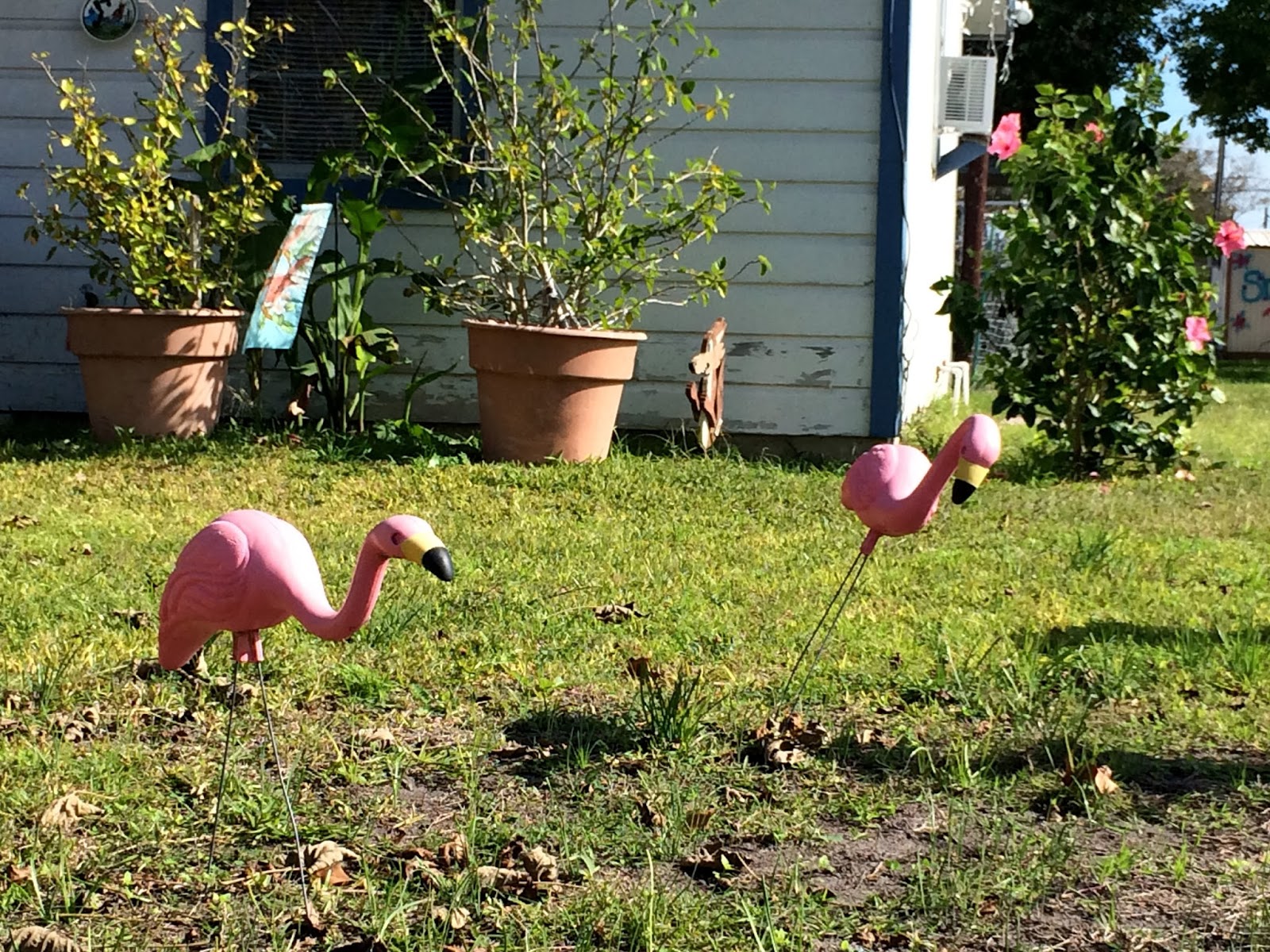 These birds prefer residential lawns (which in the winter they often share with Suburban Dwarf Reindeer.) Although not secretive, the birds can remain motionless for hours / days / forever. Given their lack of substantial feeding, they're lightweight, and can easily blow over in a strong wind.

Unfortunately, Texas, and hence the ABA, doesn't recognize Suburban Flamingo as a self-sustaining wild species. (It doesn't help that there are no reported cases of breeding and young birds have, so far, never been observed.) So - they're not countable. Just as well I saw the real thing this morning! (And yes, I did check to see if those guys moved.)

And so tomorrow I head back to Alaska, ready to fly out to Adak on Thursday. I have no idea what's out there - there are no birders on the island. But with good company (John Puschock, Bill Sain and my Big Year birding buddy, Jay Lehman), the possibility of finding our own rarities, and even a local bar, I'm sure there'll be some good stories to tell.  Although probably none involving any pink plastic birds. 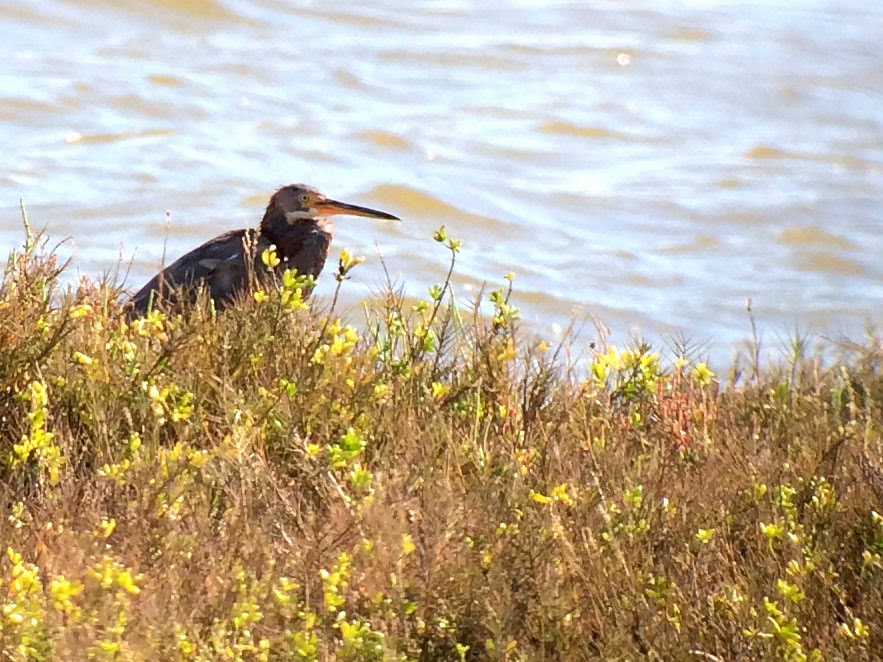