THE ALEUTIANISTS: WHOOPING IT UP IN ADAK

The Aleutian Islands are strung out before me, like volcanic pearls on a giant string necklace, separating the Pacific to the south, from the cold and foggy Bering Sea to the north. According to the native Aleuts this is where the sea breaks its back - the ring of fire that nimbly steps out from the Alaskan peninsula on its 1,200 mile sweeping march west across the desolate sea to Russia, to the Kamchatka peninsula. 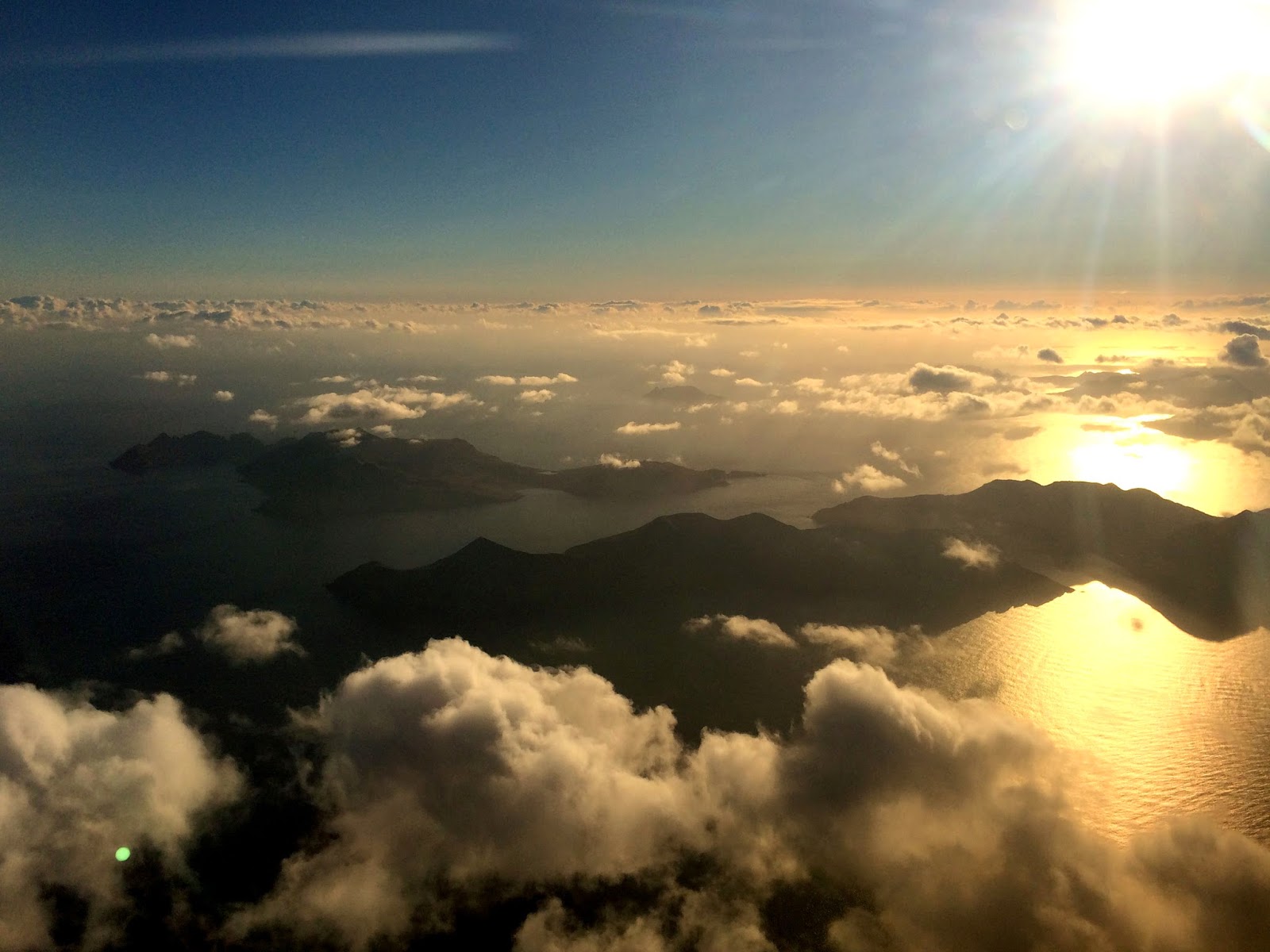 As I gaze down on the mountains and volcanoes, and their futile vertical struggle to escape the relentless sea, I think of my own struggle this year, to see as many birds in North America as possible. A campaign that has taken me to the furthest cardinal points: icy Barrow in the north, Newfoundland to the east, and the sunbaked Dry Tortugas of the south. And so it's fitting that as I near the end of this year I'm heading to Adak, the most westerly town in North America - an island that the international date line swerves to avoid.

I'm coming to the edge of America to look for Whooper Swans - a rare Asian swan that sometimes winters in the Andreanof Islands (the group to which Adak belongs.) And the Whiskered Auklet - a tiny black seabird with a comical crest and white whiskers that lives here year round, and is found only in the central Aleutians. 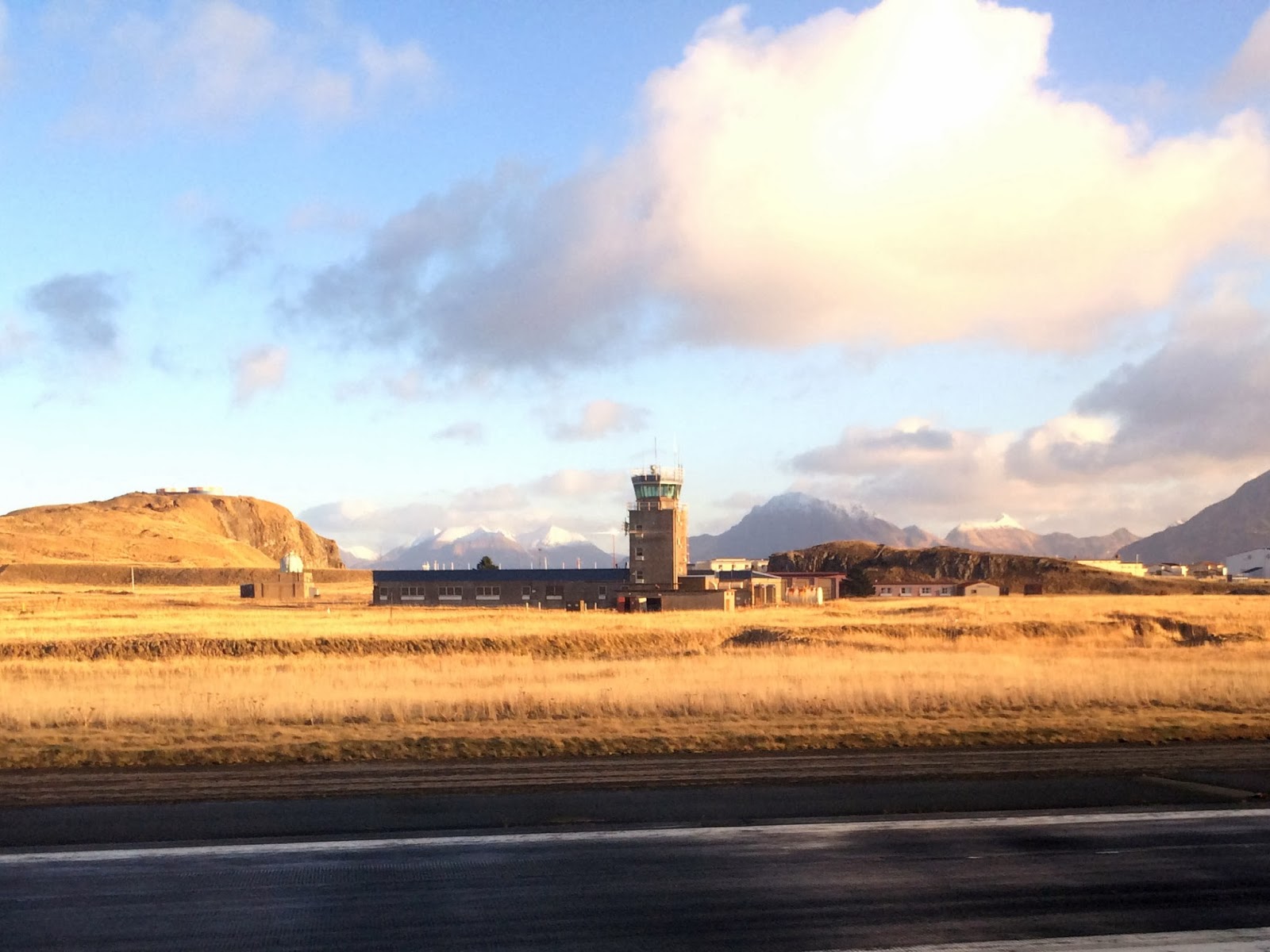 Welcome to Adak - "Birthplace of the Winds"

There are 16 miles of "roads" in Adak, and after picking up our rental car we spend the first evening exploring those to the south. Over the past couple of weeks, locals have reported seeing 4 Whooper Swans flying between various lakes in this area. The bad news is that the island is full of lakes - the swans could be anywhere. The good news is that if they are here, it shouldn't be too hard to spot giant white birds.

The scenery reminds me of the Pribilofs - wind-swept tundra with decaying celery plants. Only here, the horizons swell up with imposing mountains and volcanoes. 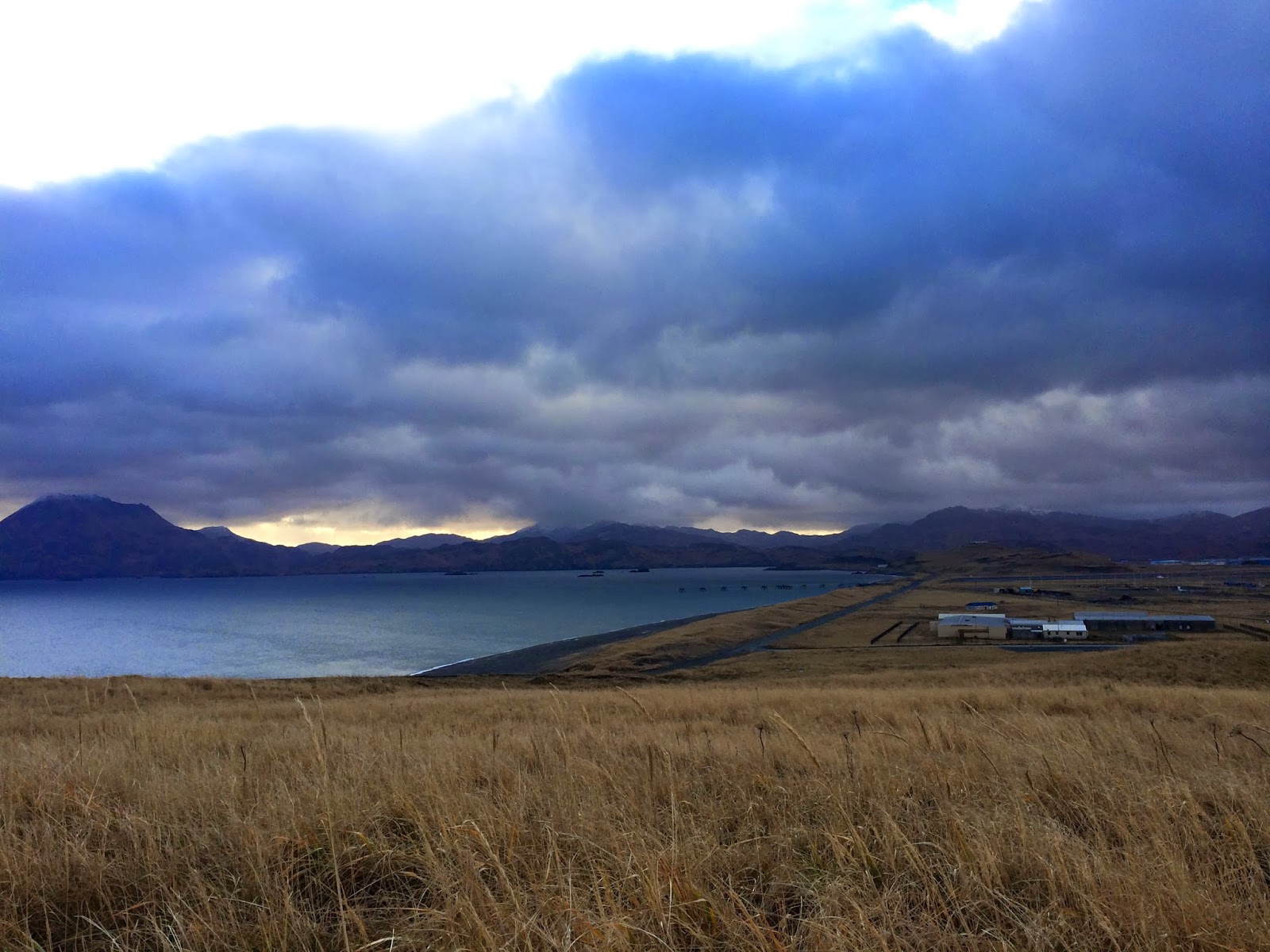 Adak - tundra, mountains and rain clouds. WIth 263 rainy days per year,
Adak is the second-rainiest inhabited place in the US, after Hilo, Hawaii.

We only have a few hours before sunset, and after trying a bunch of lakes, we fail to locate any giant white birds. 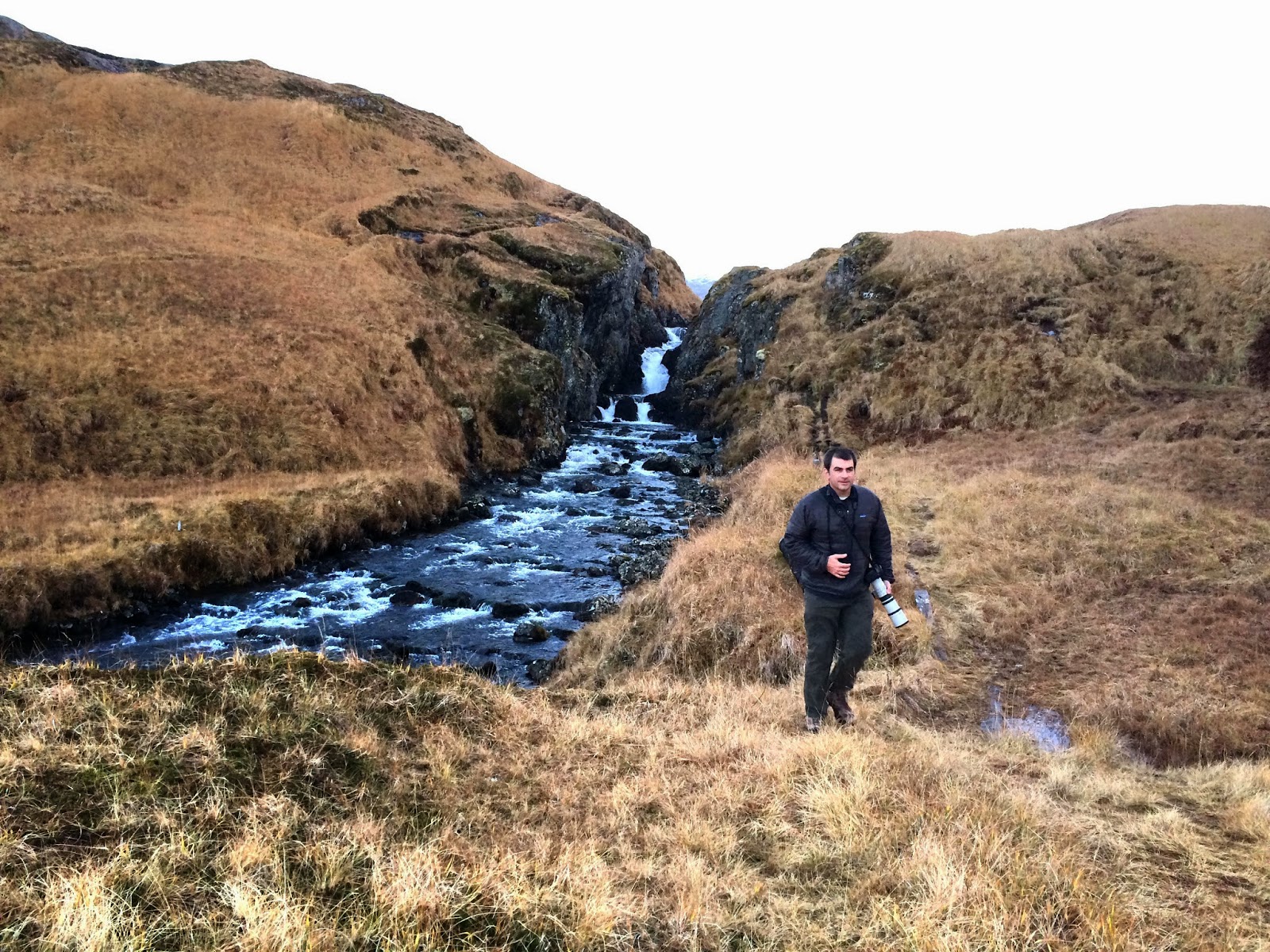 We do however find lots of smaller white birds - Rock Ptarmigan. They're molting into their white winter plumage, which without any snow cover yet makes them currently fairly obvious... 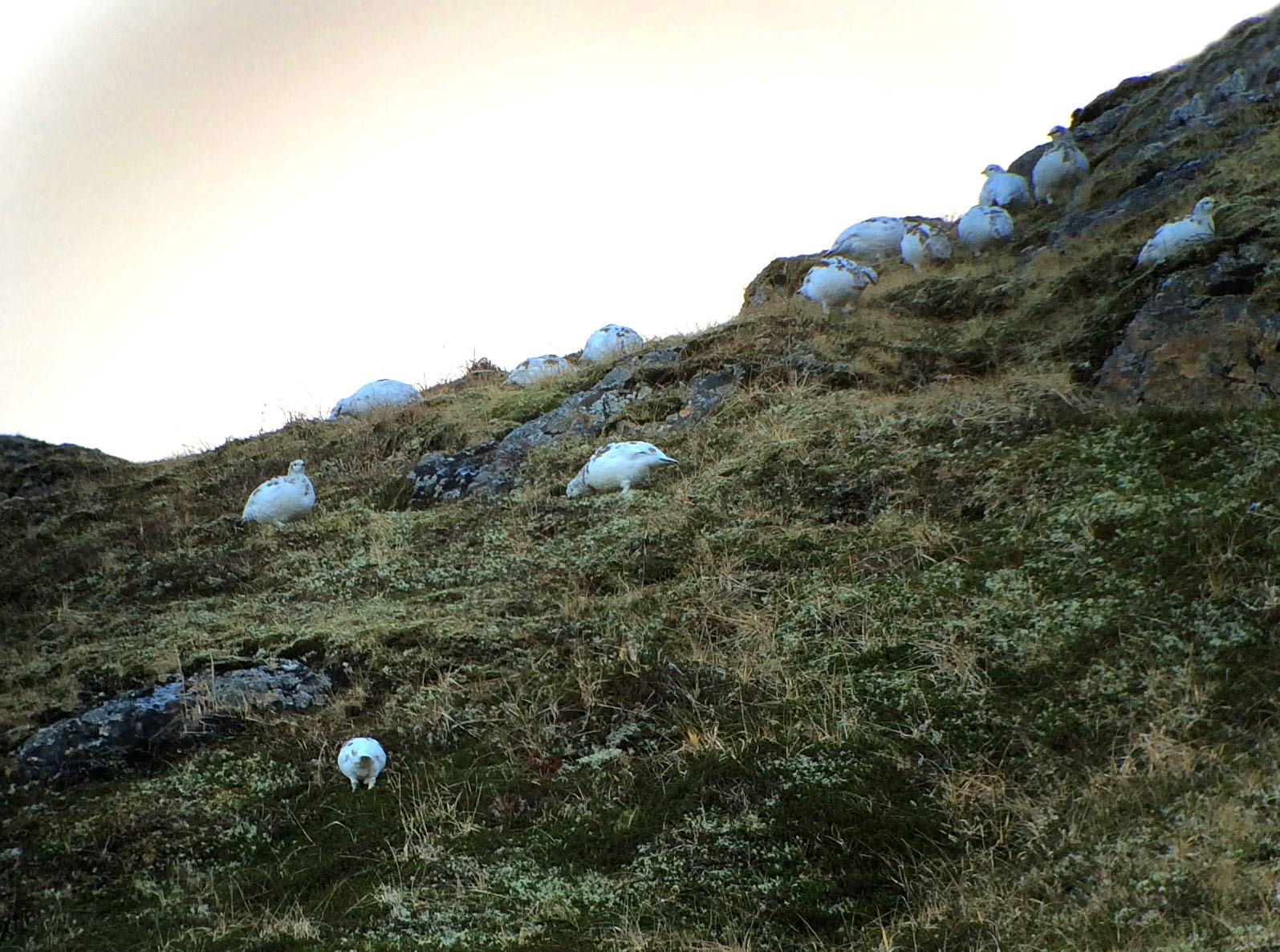 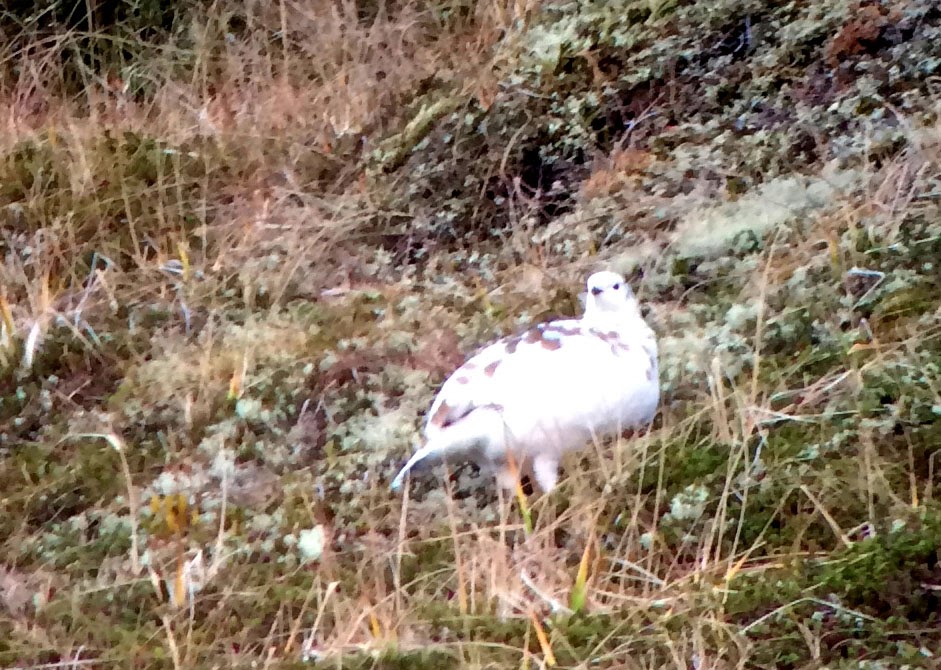 As the sun sets on our first evening here we head to the Mexican restaurant - which apart from the bar seems to be the only place to eat in town. It's helpful if you've been here before, otherwise it's pretty hard to find in the dark... 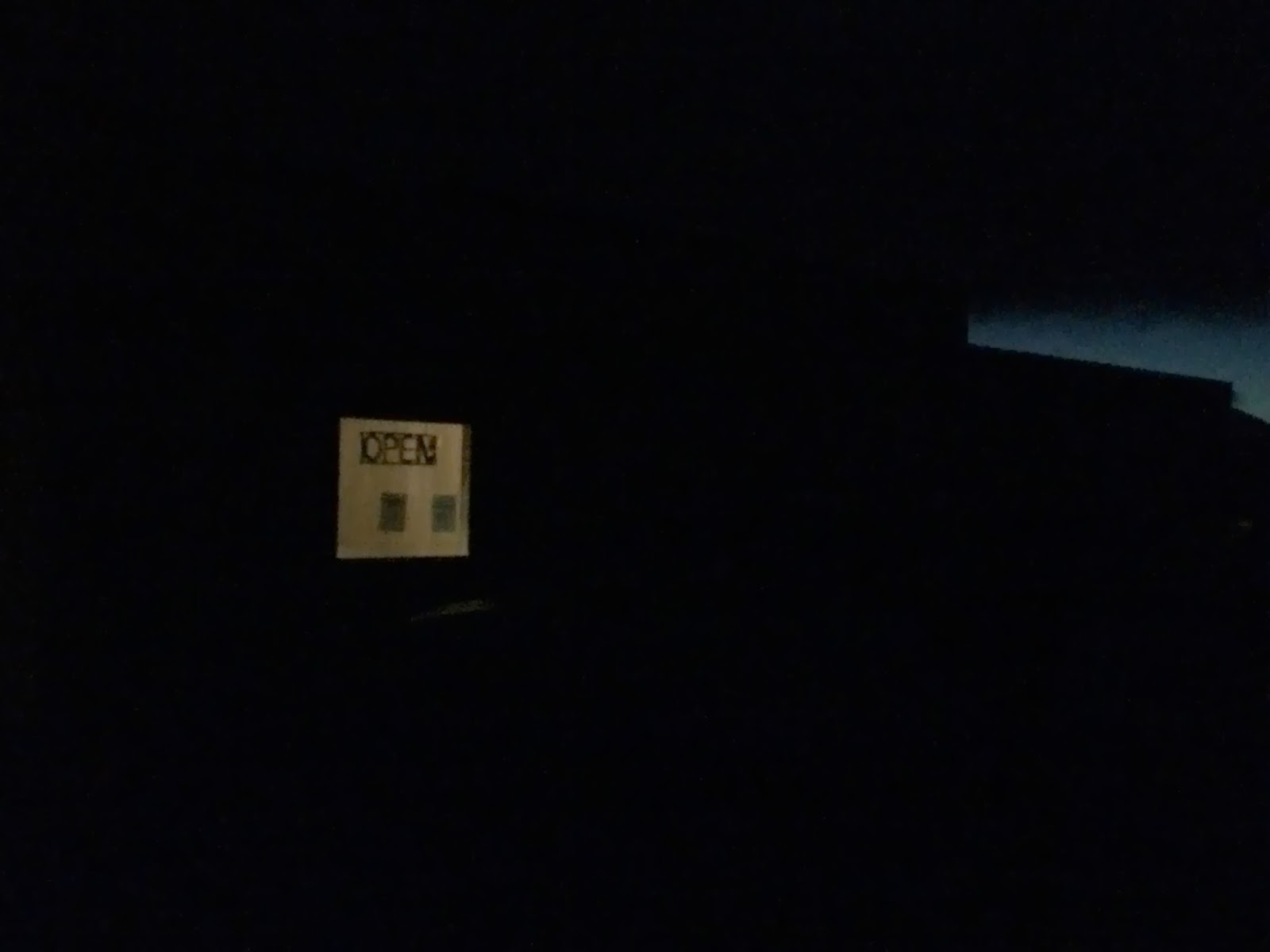 Adak - not known for its street lighting

Despite not finding the swans in our first couple of hours here, we're in a jubilant mood (they have beer here.) We're at the edge of the American world - who knows what exciting birds are awaiting us? 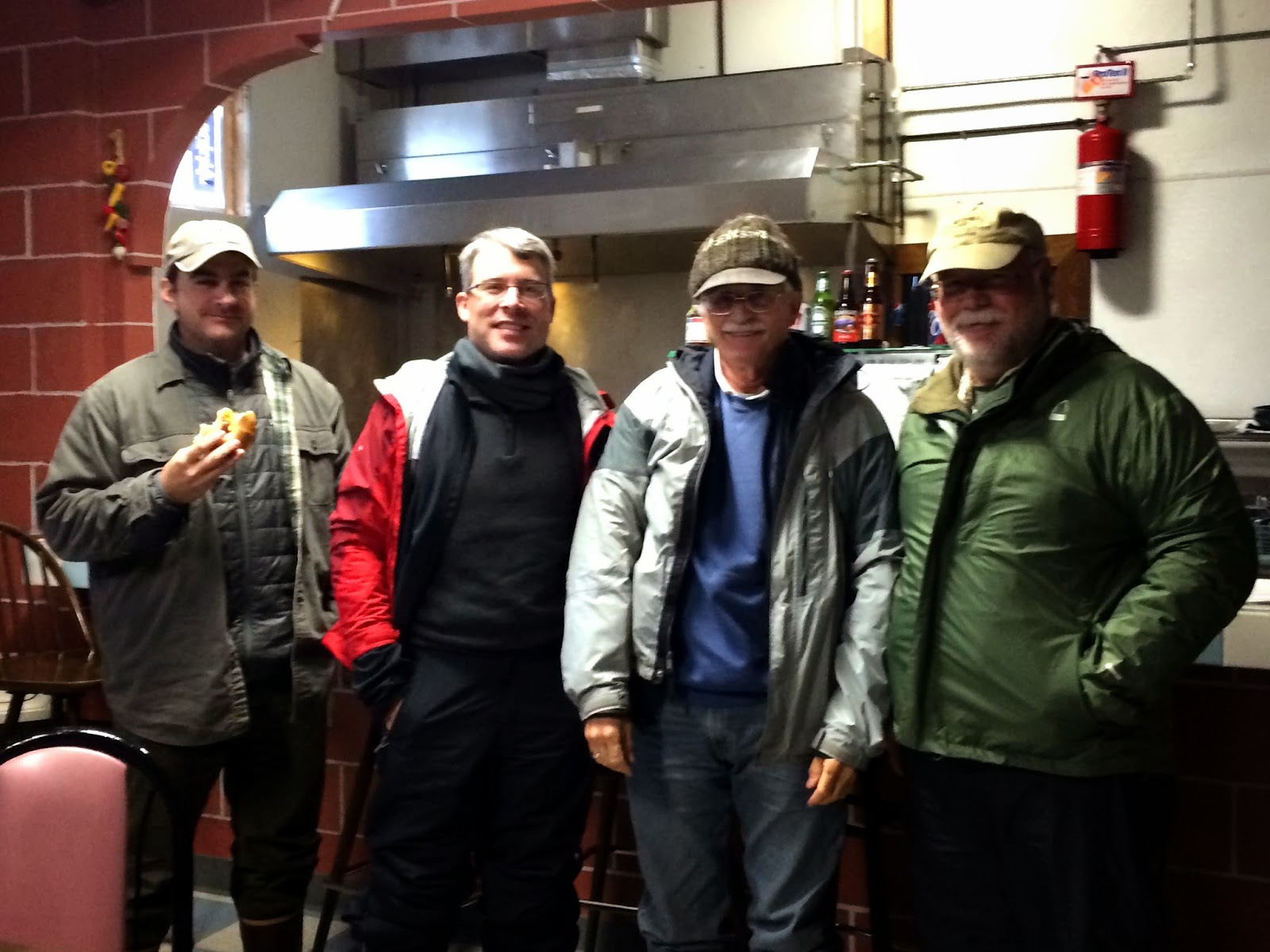 The next morning - and our first full day here - starts with another loop to the south, again looking for swans. While successfully not spotting any, we stop along the way to put out bird seed... 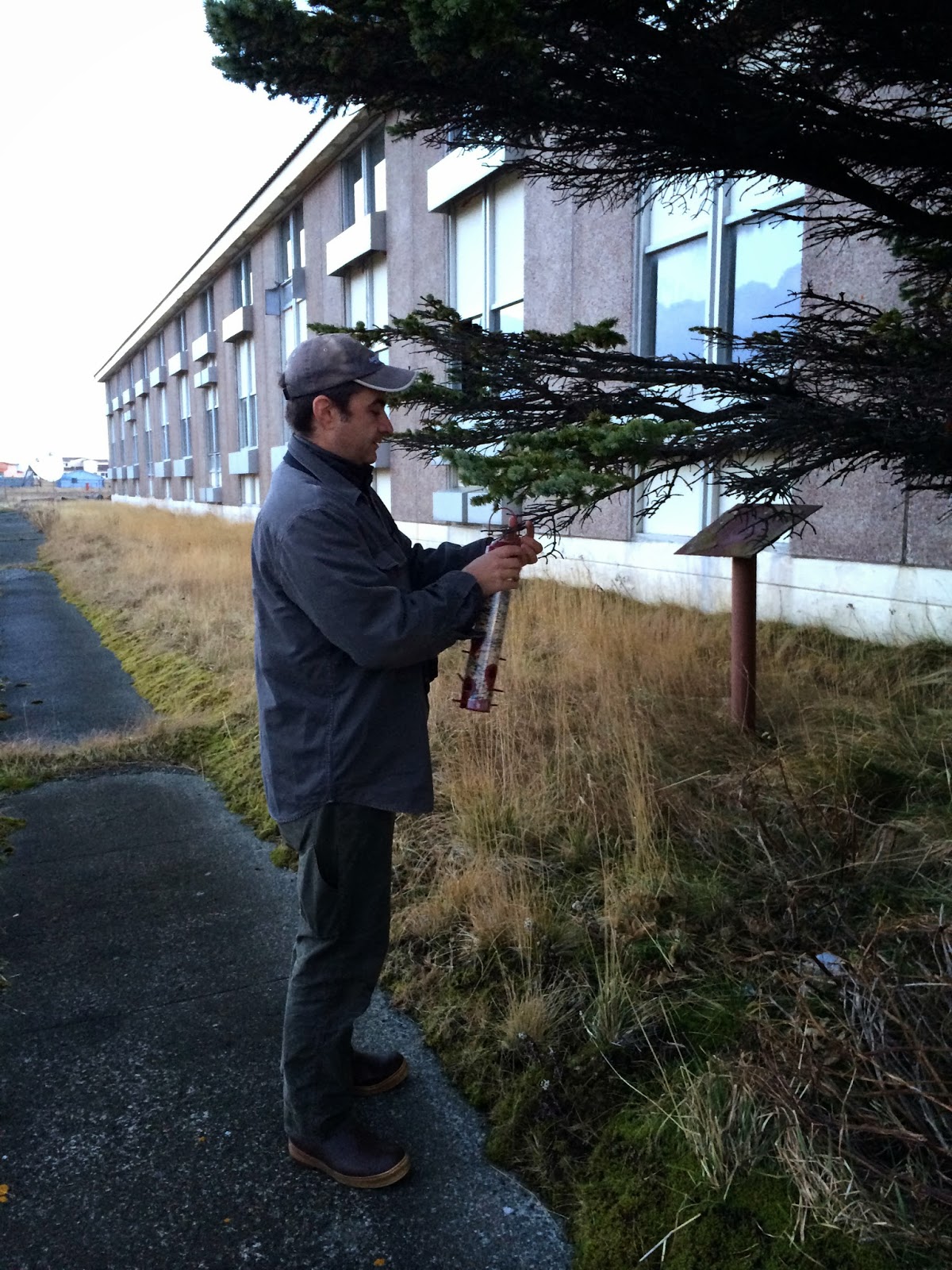 Ummm...John - I think we're gonna need a bigger feeder.
(The store had sold out of the larger swan-size feeders.)

There are no naturally-occuring trees on Adak - it's too exposed and windy. But there are some introduced coniferous trees. The biggest concentration is at the Adak National Forest... 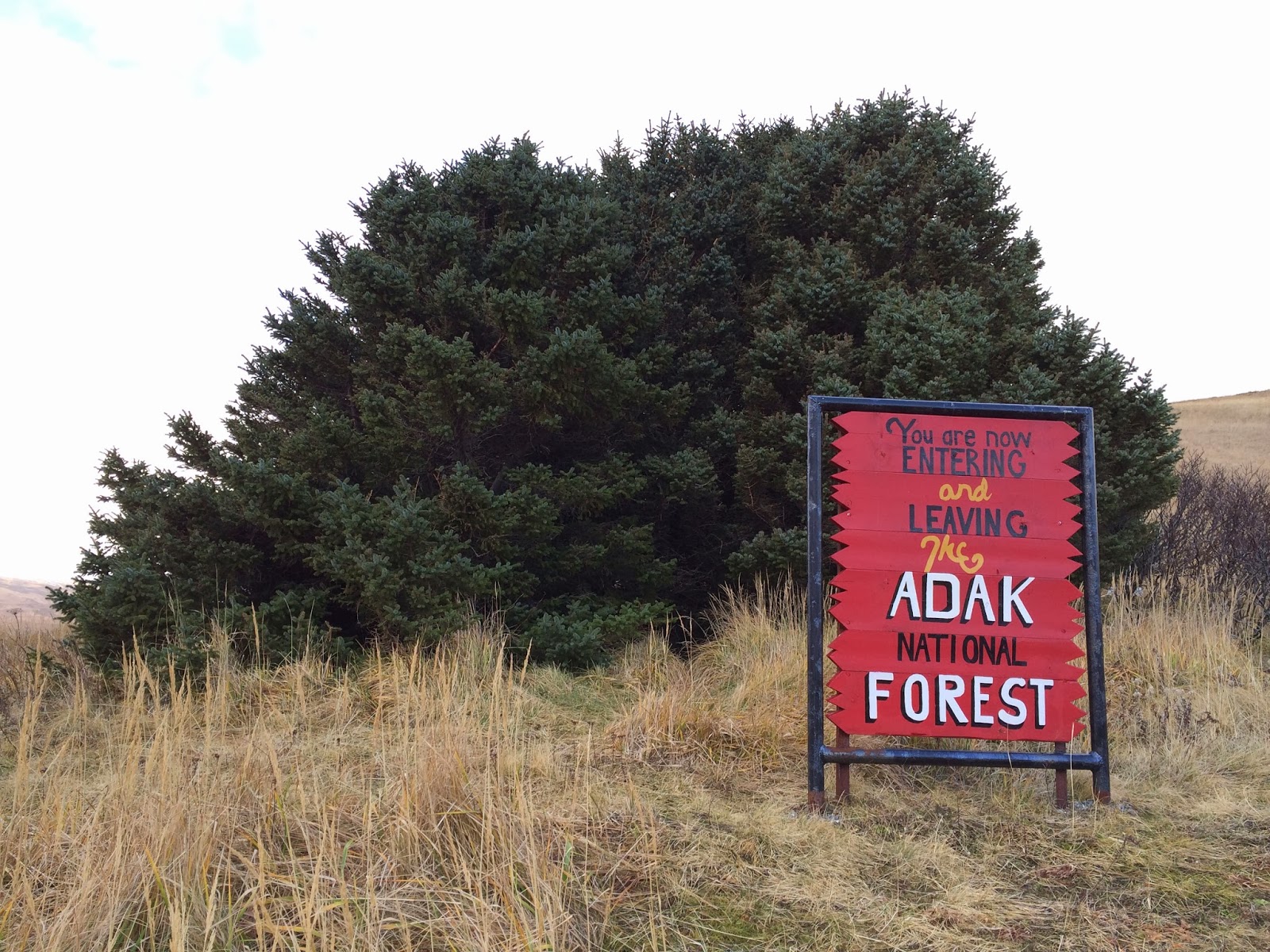 Adak - where 3 trees make a forest.

"We'll try Haven Lake next," says John. "They've had swans there in the past."

I'd be more excited about the last part, if John hadn't said the same thing about every other swan-less lake we've spent the morning visiting. I'm thinking a lot about John Vanderpoel and his 2011 big year. He came to Adak in Dec, looking for the same quarry as us. His flight back was cancelled (there are only 2 flights a week in and out of Adak) which gave him a whole week here. And in that week, he did not see any swans. We have 3 days.

It's a bumpy drive over the pot-holed gravel road. As we round each bend a new vista opens up, stopping the car as we excitedly scan for birds. Haven Lake is north of town, and requires a gentle rise in elevation. As we crest the top of the road, the lake suddenly appears, spread out before us. And in those initial and confusing seconds several things happen at once: I hear screaming in the car, feel the harsh application of brakes, and I see a large white bird flapping at the end of the lake. Swans! We've found the swans! There are three - an adult and two gray-colored young... 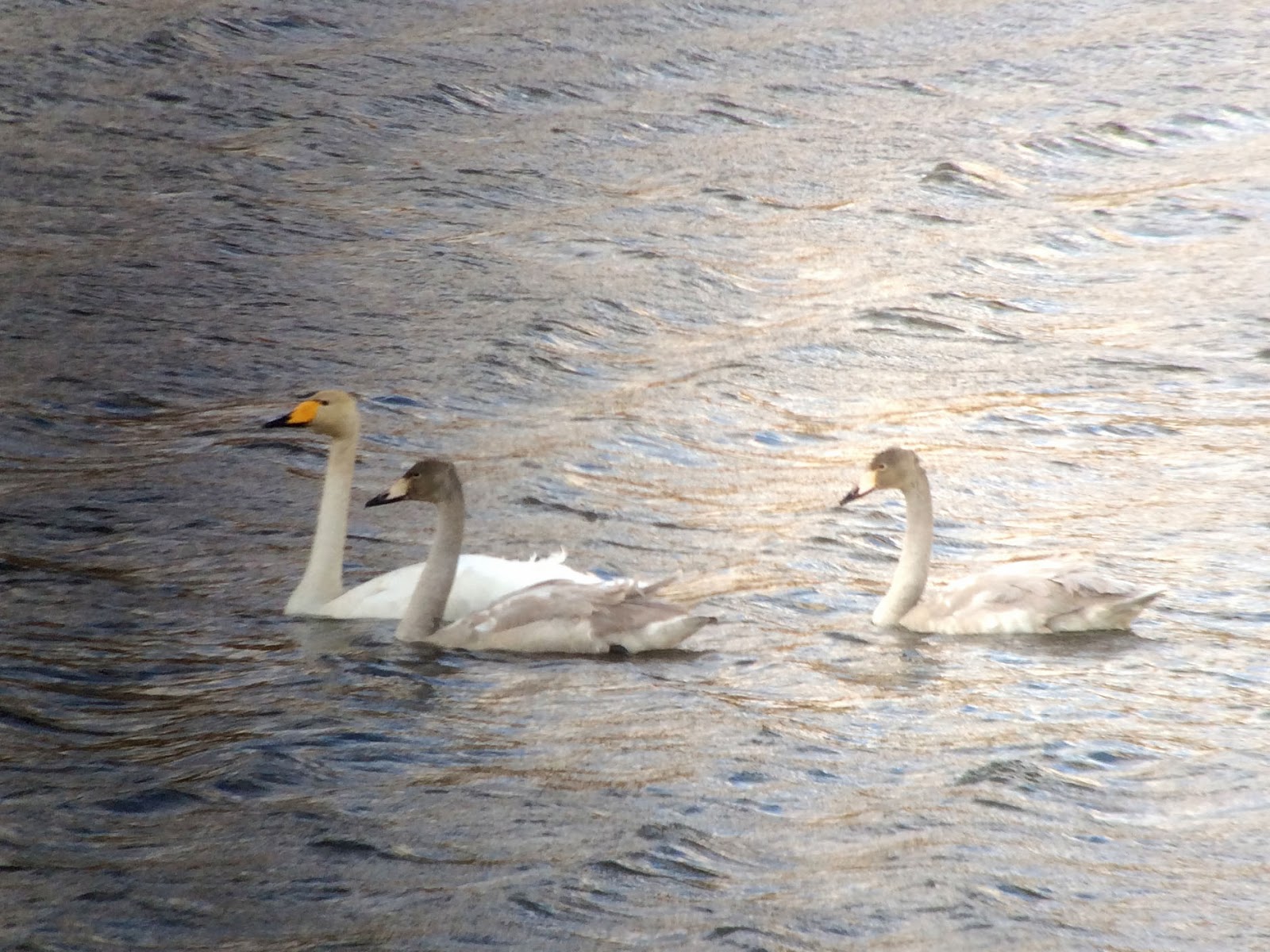 Whooper Swans - adult (left) with two young.
Notice the large amount of yellow on the bill of the adult.

These birds breed in northern Eurasia (mainly Russia.) The east Asian birds winter in China, Korea and Japan, with a few, like these, braving the harsh Aleutian winters. 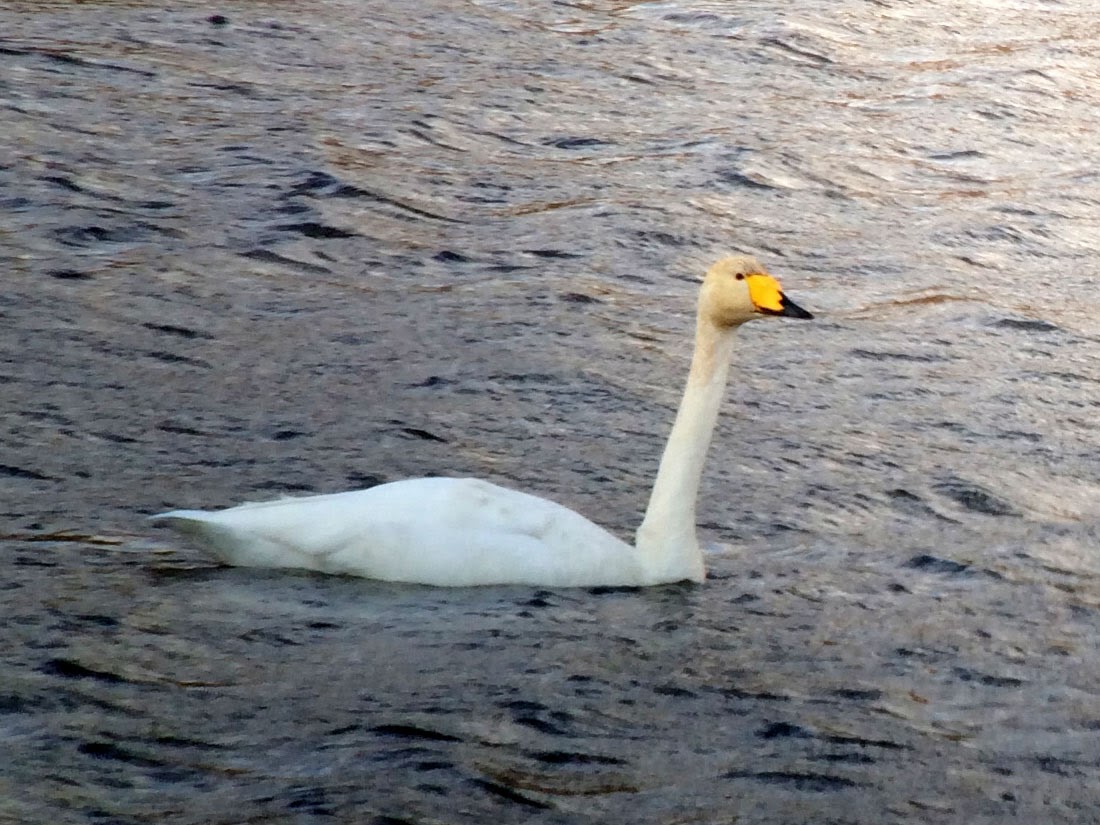 Whoopers pair for life, and look after their young (cygnets) during the winter. 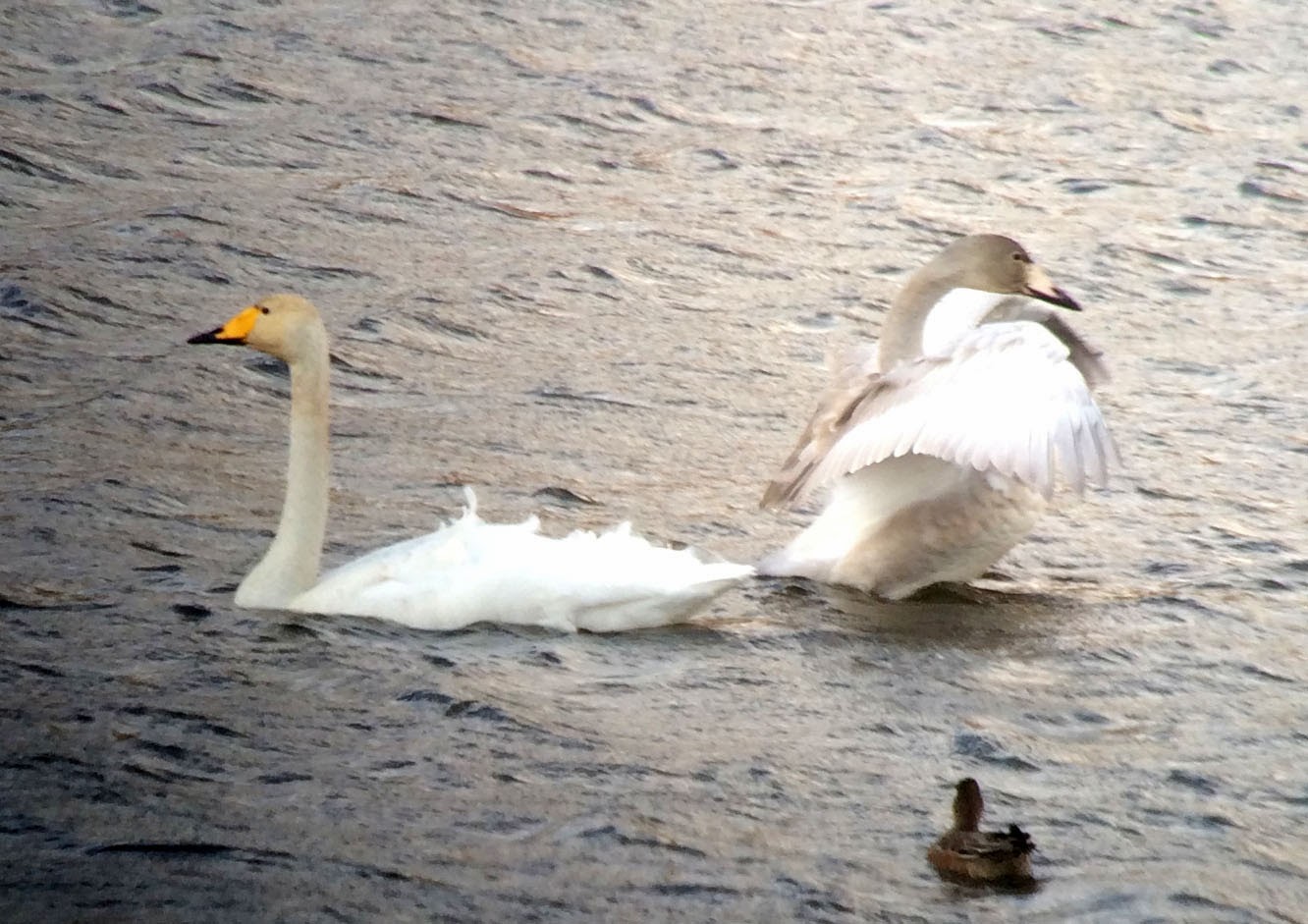 After the initial shock and excitement of finding the swans, we're all speechless as we watch these graceful creatures effortlessly float around the lake. Meanwhile, back on land, there are some less graceful creatures... 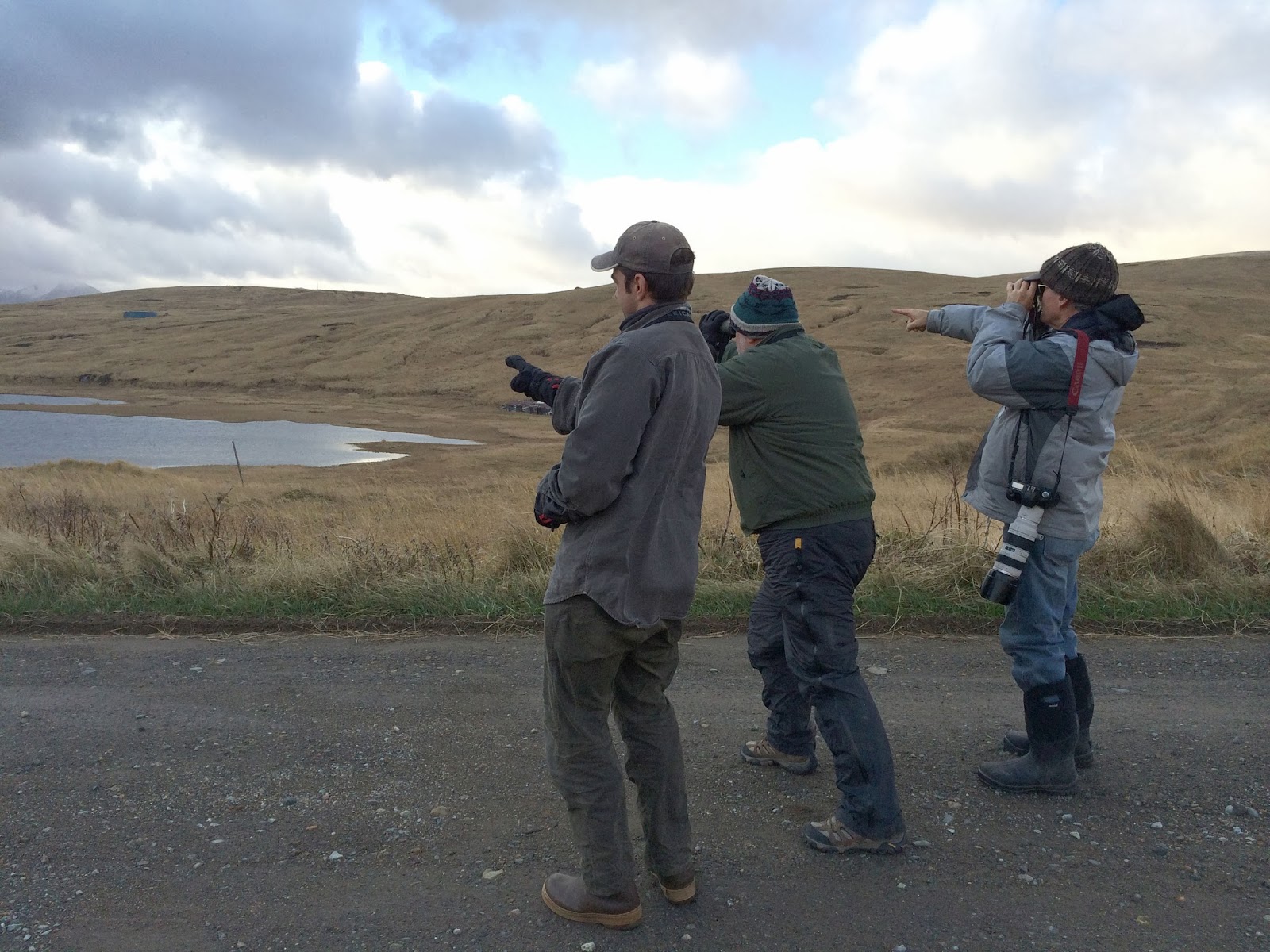 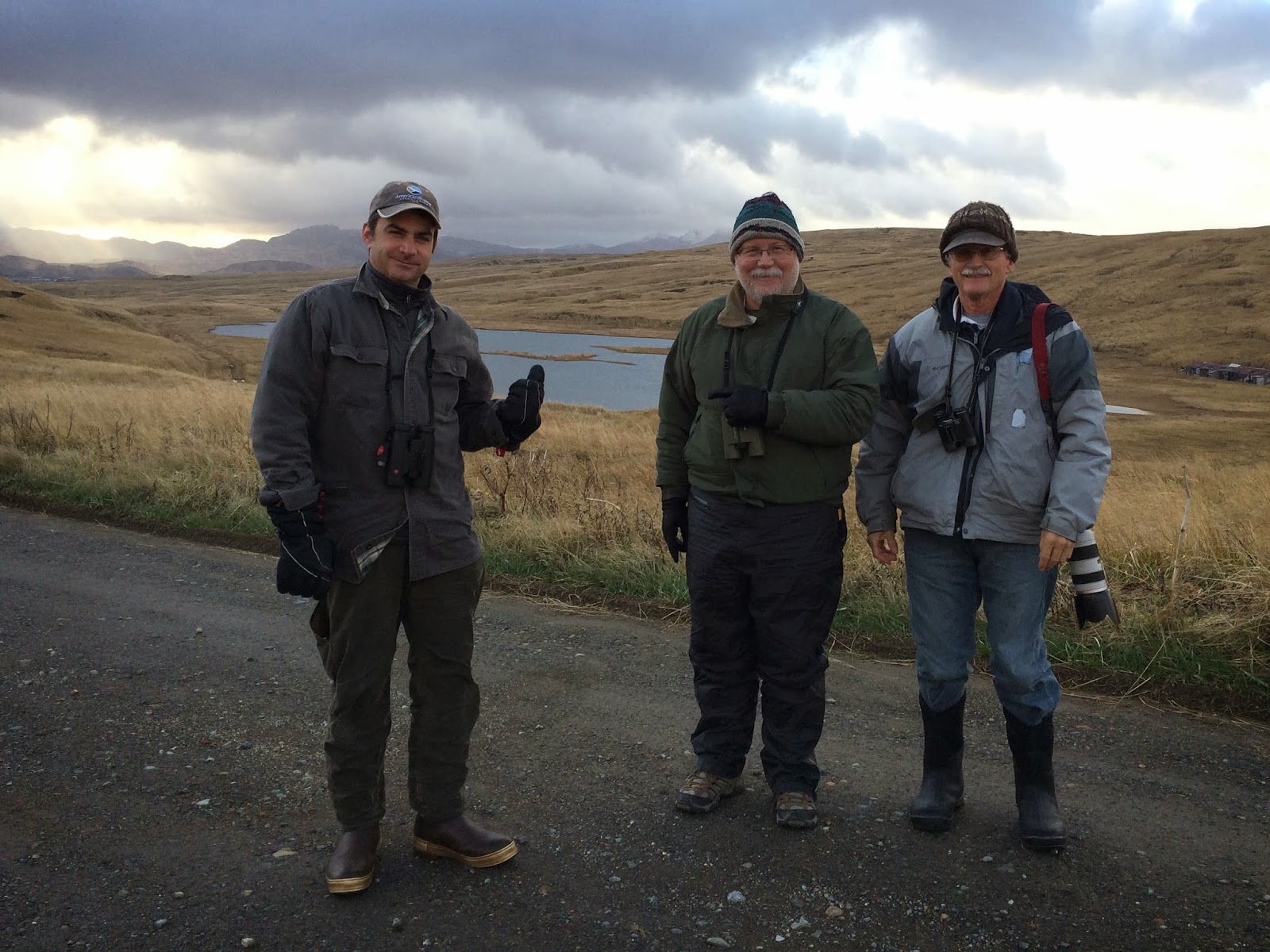 Happy birders at Swan Lake. John's pointing at the swans behind.
(Wait, that is his index finger, right?)


Adak played an important role for the US military in World War II. After the Japanese took control of the western Aleutian islands of Attu and Kiska, the US Army Air Force launched attacks from a base here in Adak, and successfully reclaimed the islands. After the war, the base was transitioned to the US Navy who developed a base for submarine surveillance during the Cold War. At its peak, the city of Adak housed over 7,000 personnel and families. There was a college, a school, hospital, movie theater, pool, bowling alleys, and even a McDonald's.

The end of the Cold War hostilities prompted the Navy to close the base in 1997. The facilities were transferred to the native Aleut Corporation, and the thousands of personnel that had called Adak home left. Today it's a ghost town - except for some 80 residents that live among the ruins. 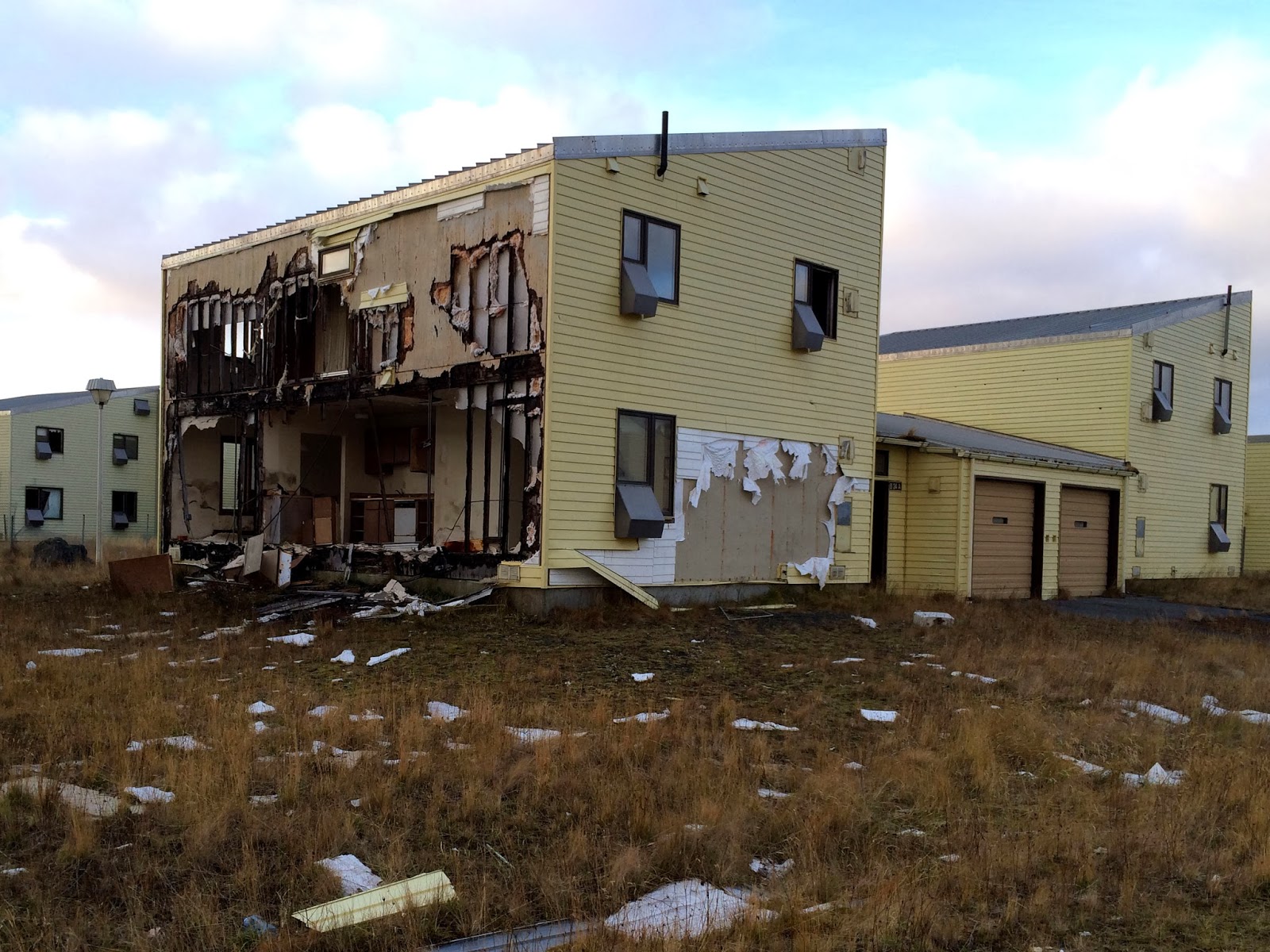 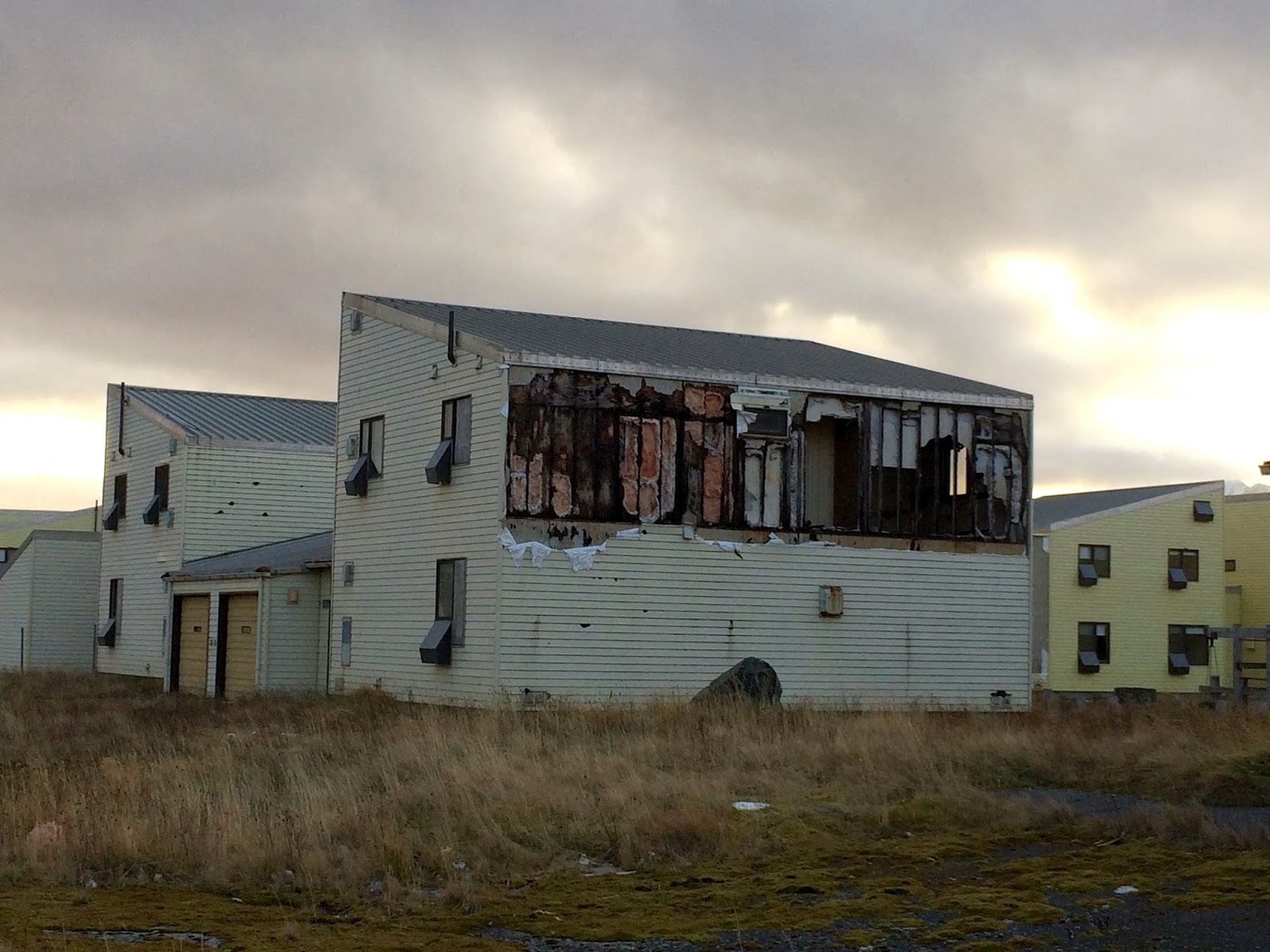 Abandoned to the elements - hundreds of houses
serve as reminders of a once populous town. 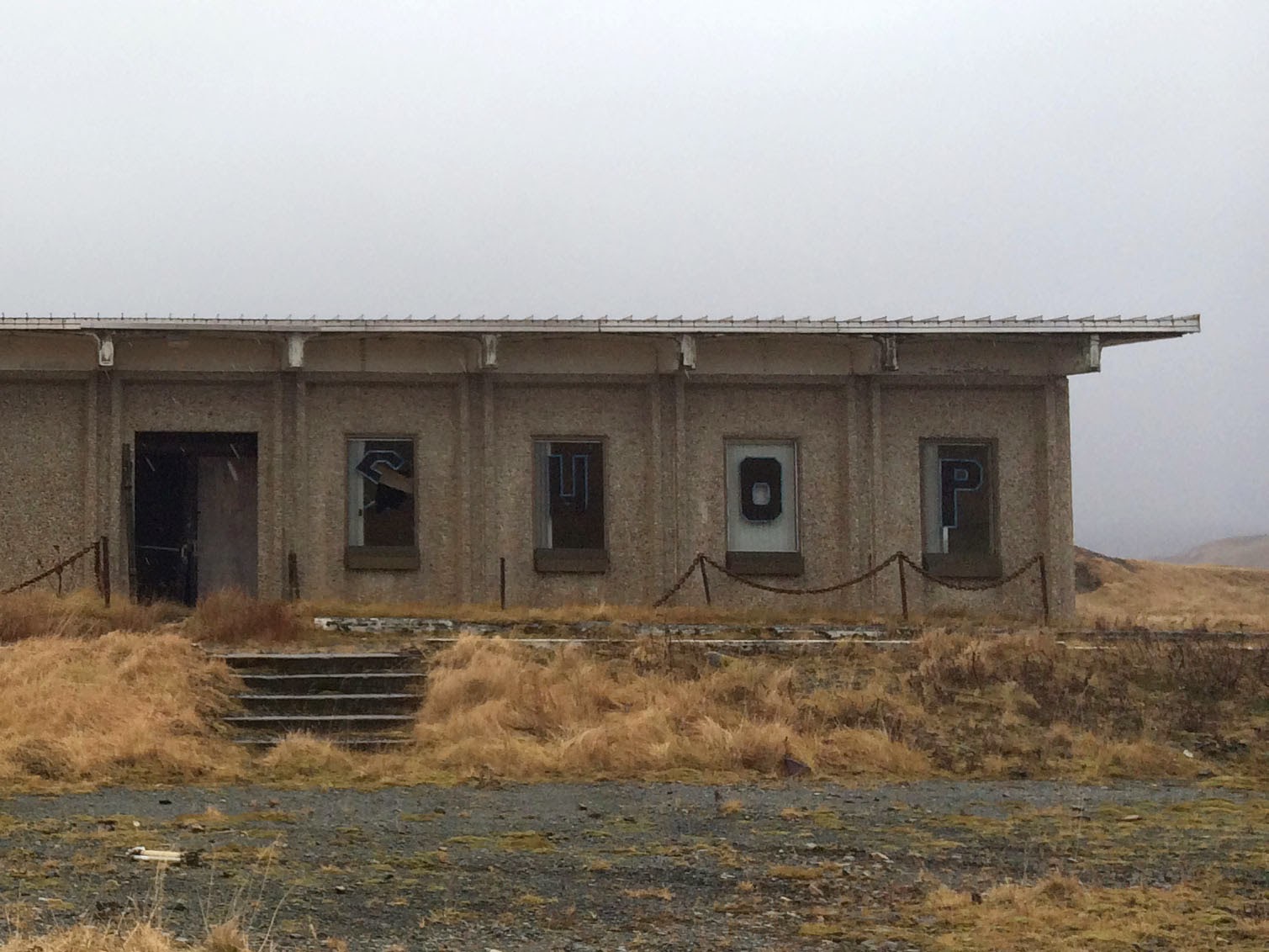 Not much for sale in the Adak Shop these days... 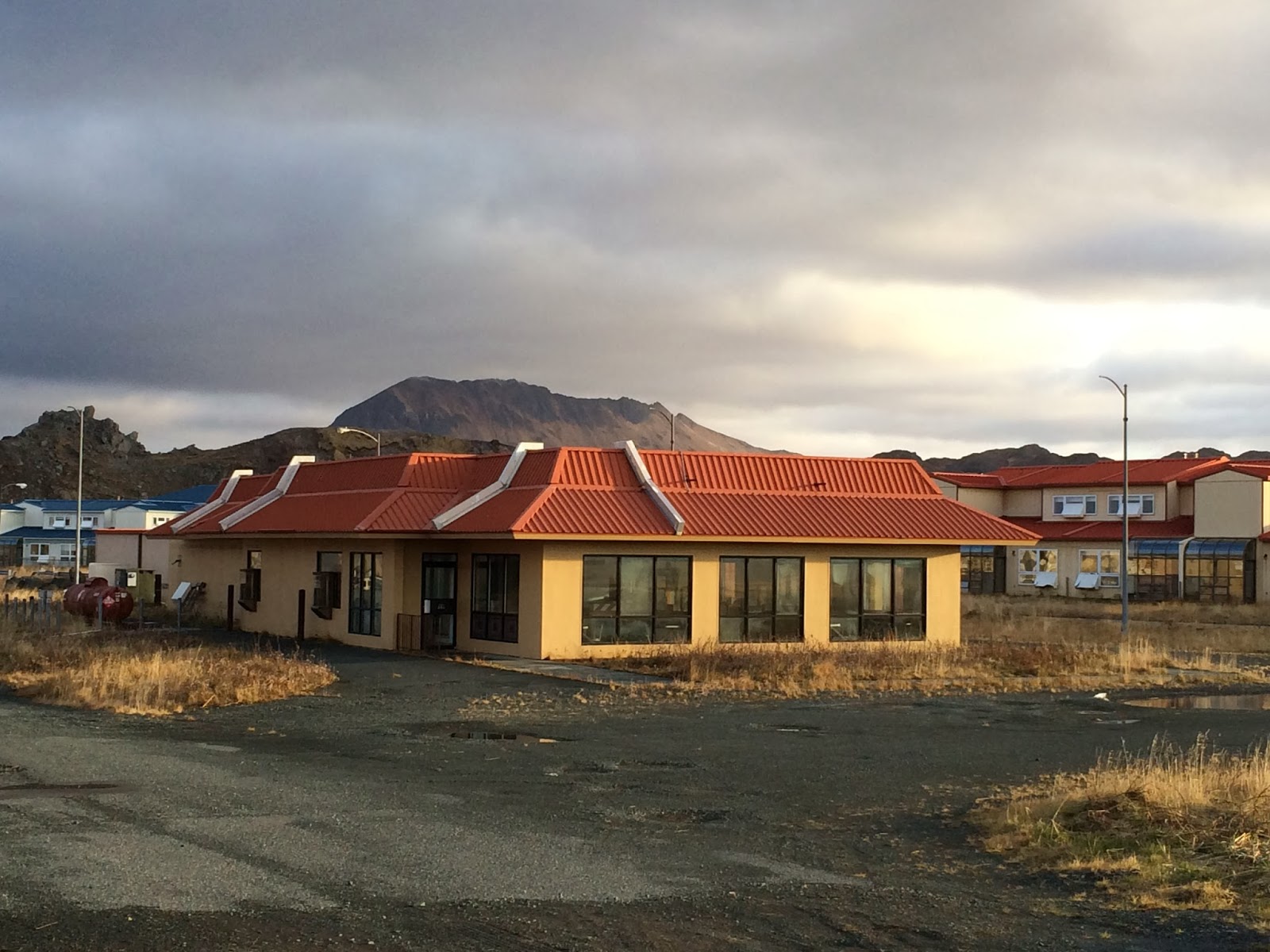 Not so fast food. A McDonald's ruin. 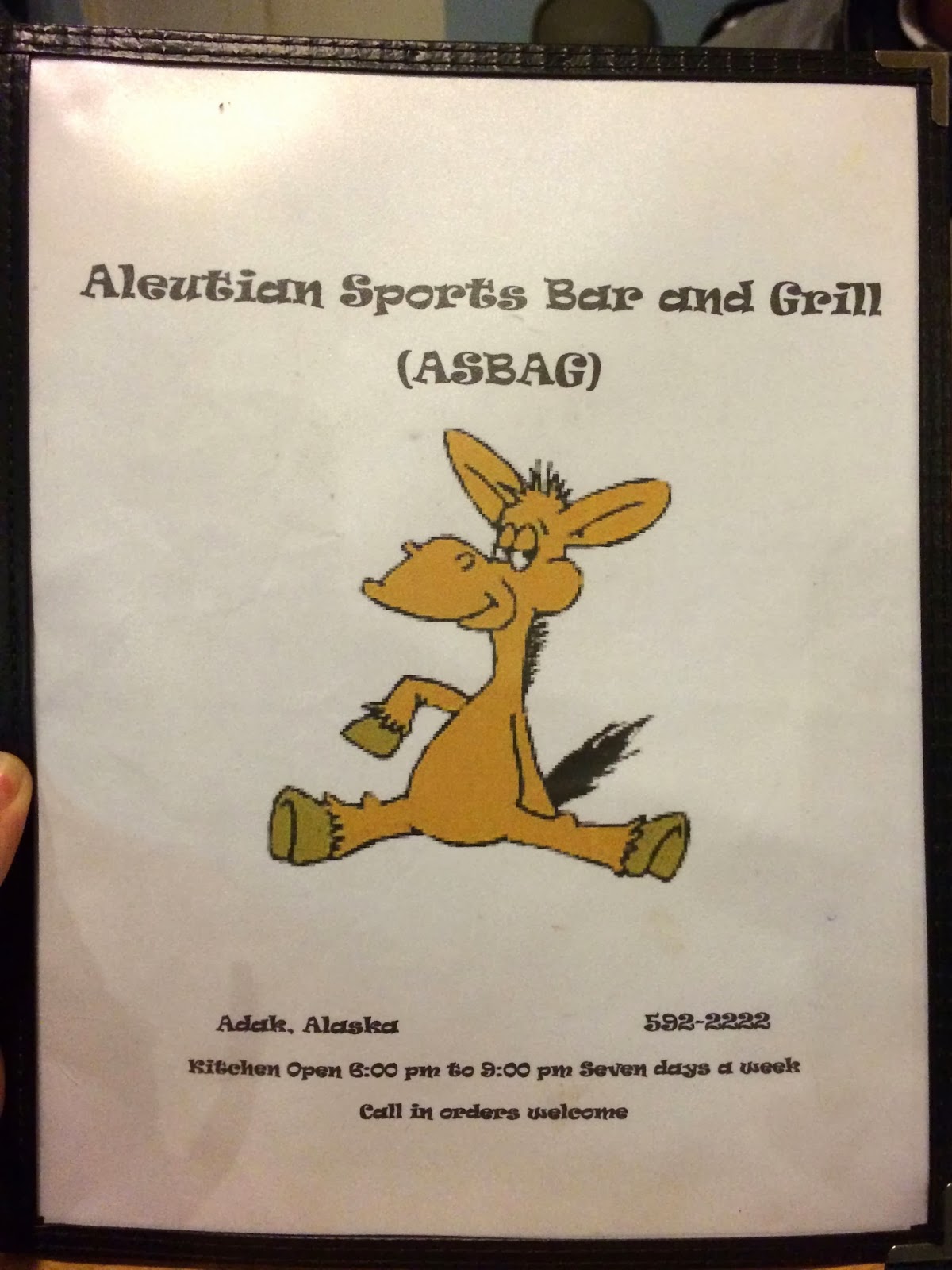 And like the restaurant the night before, it's not an easy place to find... 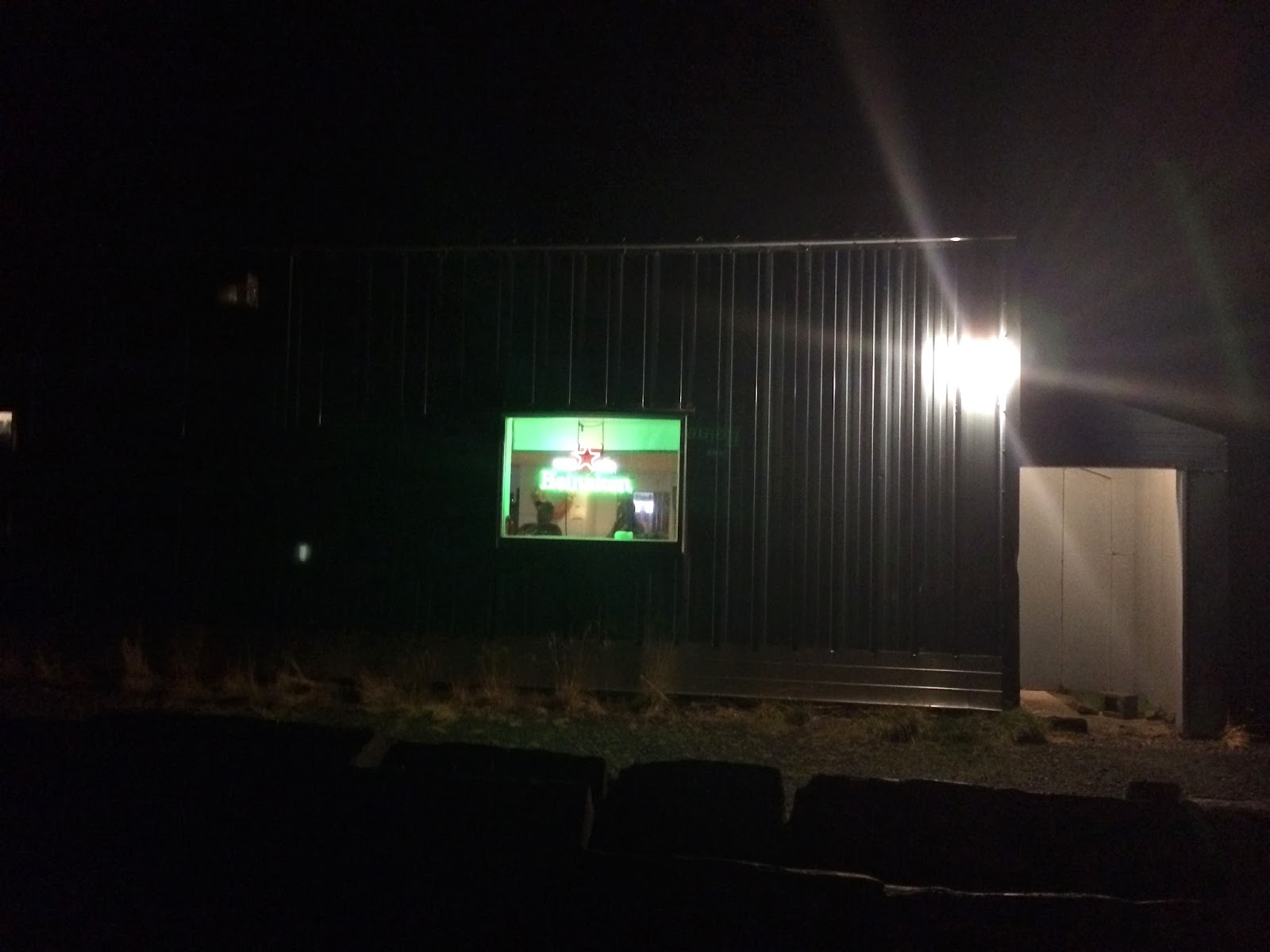 Welcome to the ASBAG!

The ASBAG has all the ambience of the 1980s except for the prices. 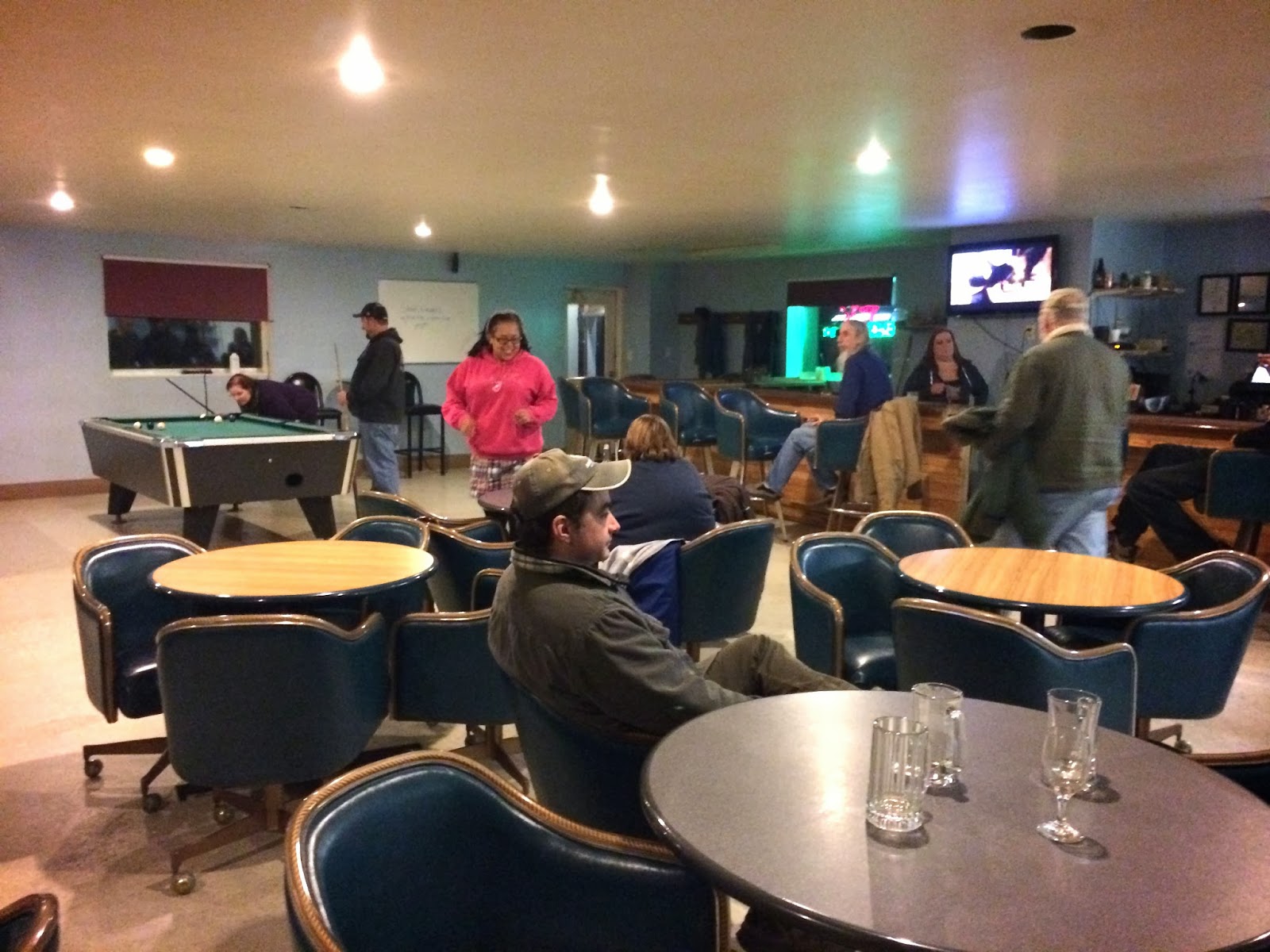 As we're celebrating, Jay reminds me how I told him, not so long ago, that "I'm definitely not going to Adak!" As this year has progressed I've found myself in many odd places that I'd never have expected. And being in Adak in the winter is definitely one of them. But with swans, good company and the ASBAG, I could be doing a lot worse!

Stay tuned for the next trip report from the edge of the world...