"Umm. I'll have the Great Skua, please. I believe it's medium rare. And I'll have a side of Tropicbird. Oh wait - that's probably out of season. Albatross?"

At least, that's what I'd like to say. But I don't, because (a) I'm hungry, (b) it's the only place in town that's open, and (c) they're about to close. I'm also wearing a Red Sox cap, and I don't want to give them another reason to not serve me. And so I play it safe.

"I'll have the grilled tuna."

I'm back in Hatteras, North Carolina. It's my 4th time to the Outer Banks this year and Great Skua is on my big year birding menu. (And yes, they are medium rare.) And while I'm eating my non-skua dinner (and apparently forgetting the advice about not drinking alcohol the night before a boat trip) I'm thinking about the next day - a pelagic trip on the Atlantic looking for the only currently chaseable bird in North America that I haven't seen this year - the Great Skua. And like many of the trips this year, I'm nervous. Will I see the bird? Will everyone else see it except me? Will I fall overboard? Did I leave the iron on back home? Is tuna normally this tough, or did I *actually* order the skua?

I should also mention that I have new traveling companion on this trip - Travis (the traveling trinovid.) I've been birding with him already this year - in Barrow and Adak. He's also doing a big year (he's over 600), and keeping a blog here. Travis - I should mention - is a pair of Leica Trinovid binoculars. After having a blast with him earlier in the year, I was very happy to be asked to look after him for the final week. 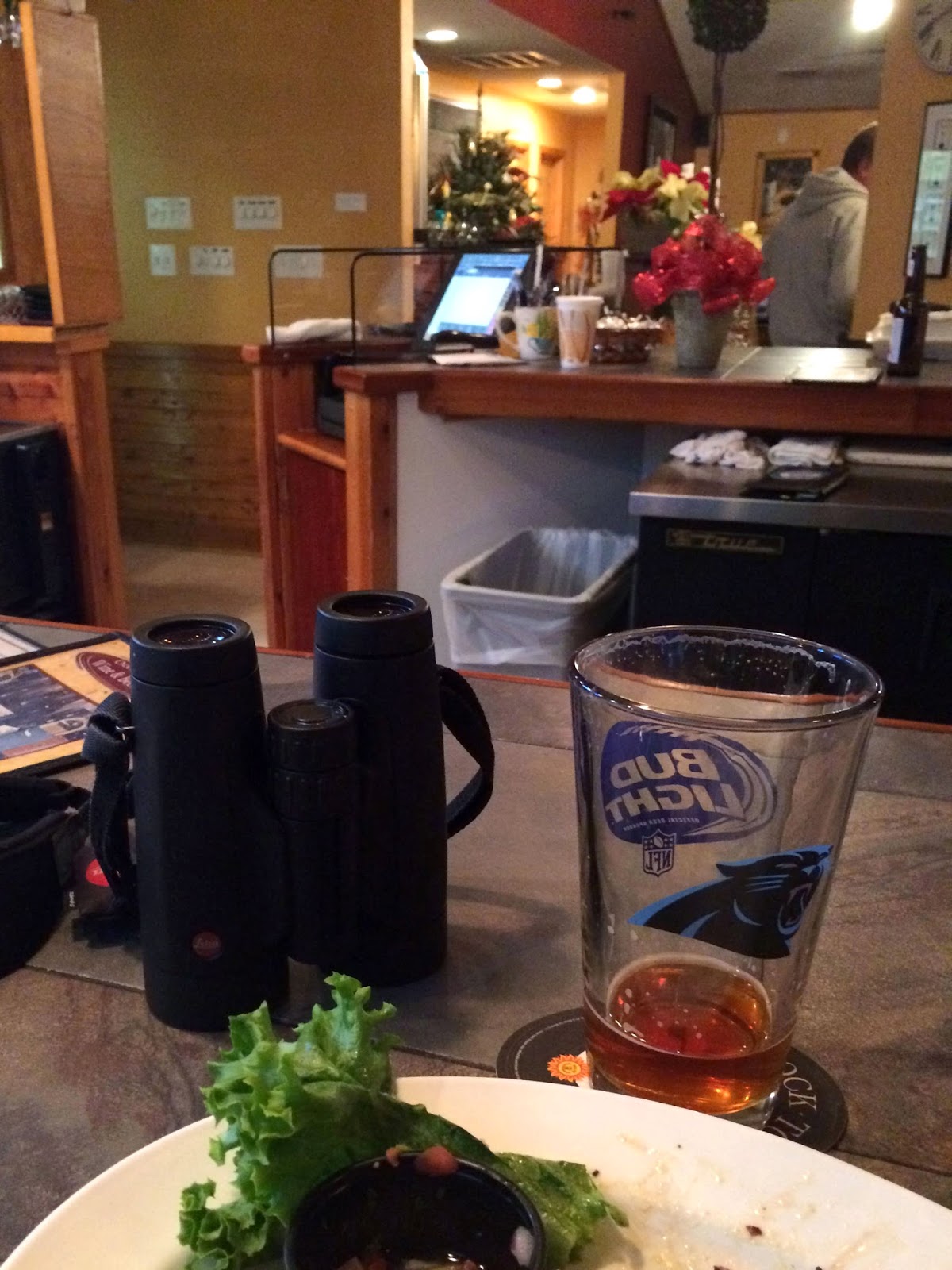 Travis (on the left.) Looks like he ignored the no drinking rule too.
(And what's that? The remains of a Skua dinner?! Typical!)

And so the next day - today - starts like most potentially great birding days with what never feels like enough sleep. And while it's still too dark to actually see any birds. 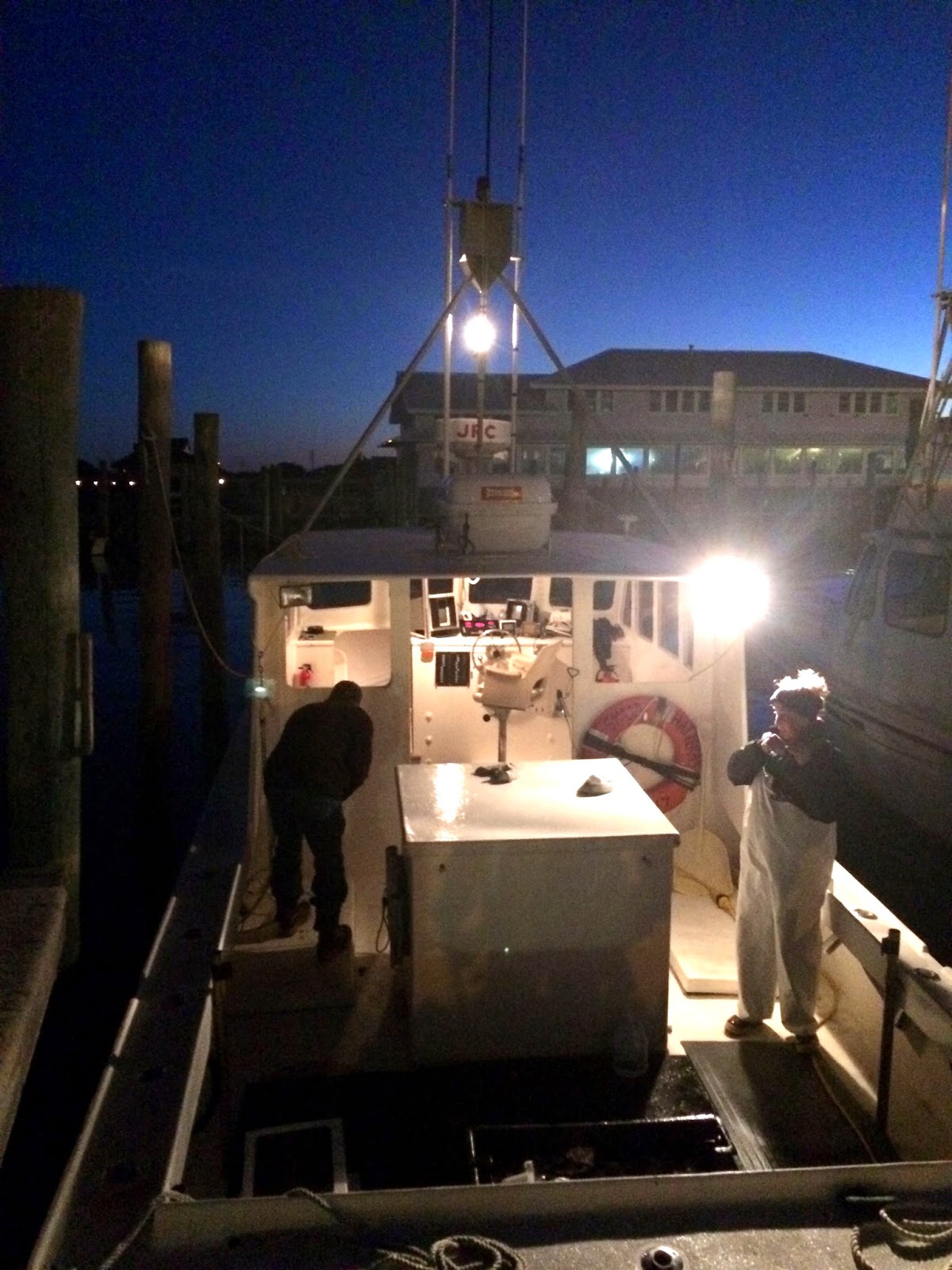 6:30am. Hatteras, NC.
Brian and Kate preparing the Skua - our boat for the day.

There are 7 of us on the boat. As well as Brian Patteson, the captain, and Kate, chief chummer and bird spotter, there's Lynne Miller (of the ABA), Nate Swick (birding superstar and ABA blogger), and Bruce Richardson - who has a ton of experience birding Australia as well as the US. Jay Lehman and I are the big year birders on board, with only days left in our quest. 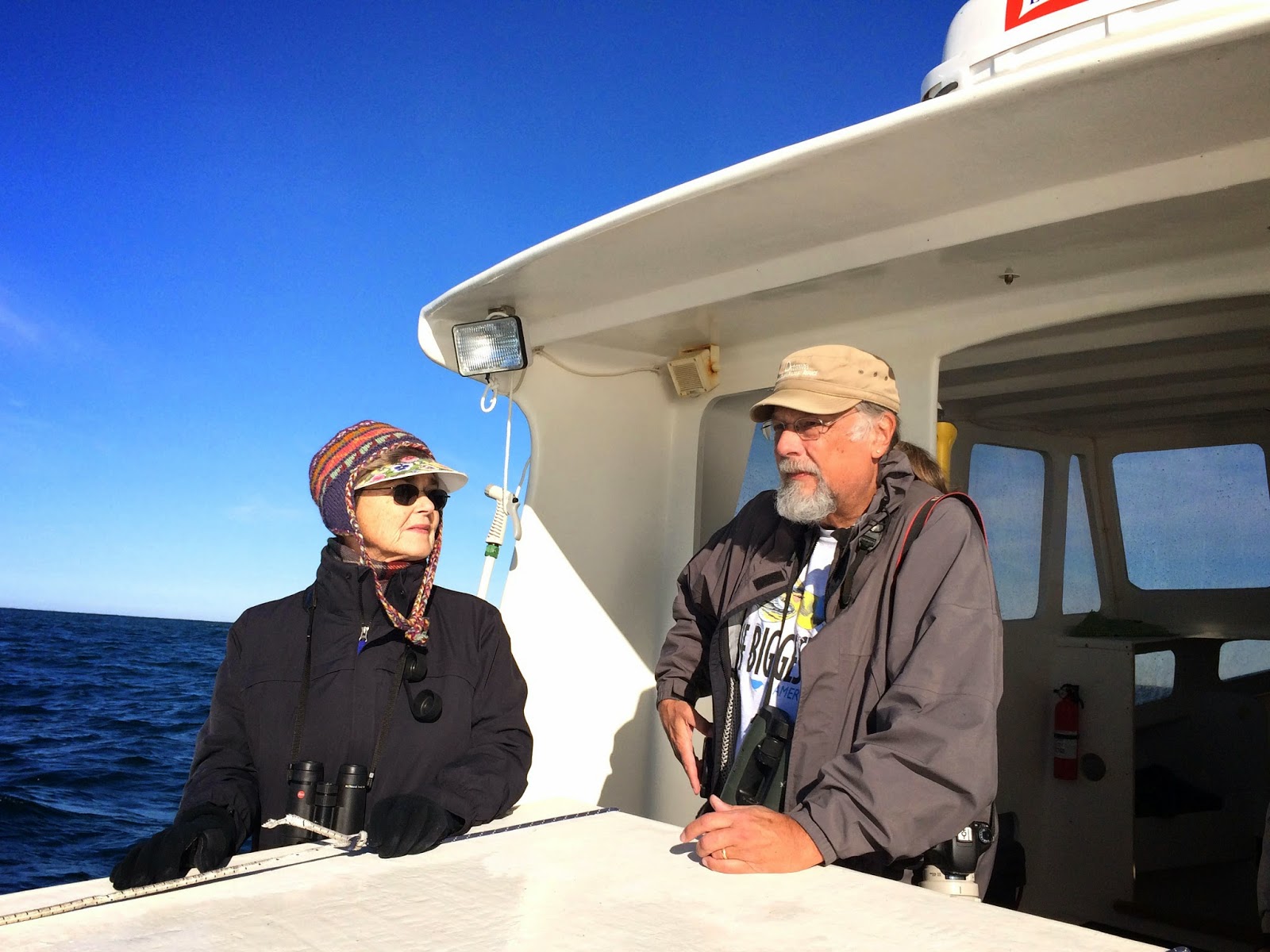 Lynne and Bruce. Both hoping for a Great Skua lifer today.

As the sun peaks over the watery horizon, the ocean in all its splendor and horror is quietly revealed to us. An ocean that is completely bird-free. But not for long... 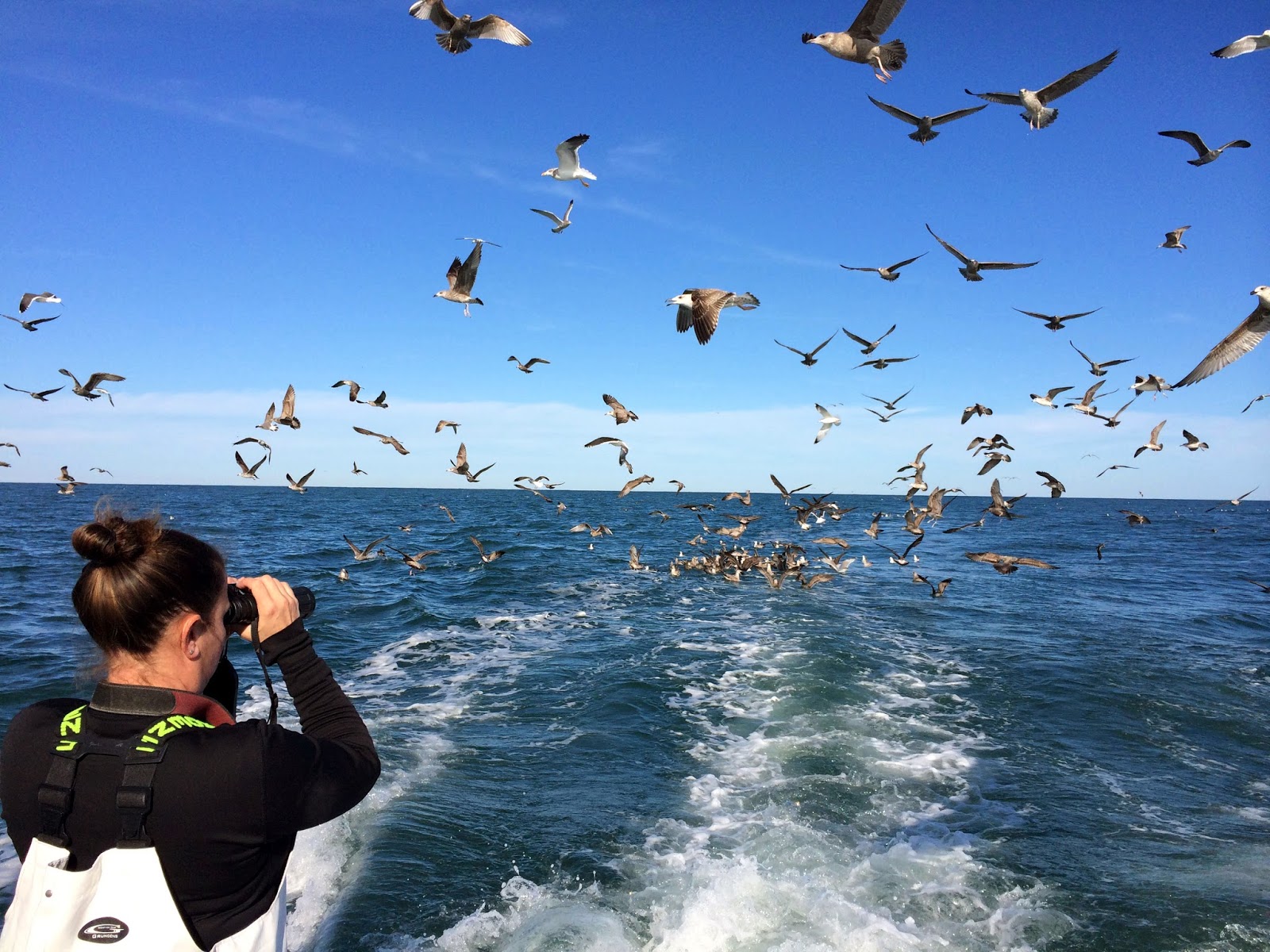 Whoa! Where did all those gulls come from?

It always amazes me how fish offal and beef fat can transform a completely dead, bird-free ocean into a gull feeding frenzy. You have to respect a creature that can not only smell beef fat from a great distance, but then fly over to investigate and pick fights with other gulls just so that it can eat the disgusting stuff. (A not dissimilar phenomenon can be seen in the UK with humans at kebab vans on a Friday night.) 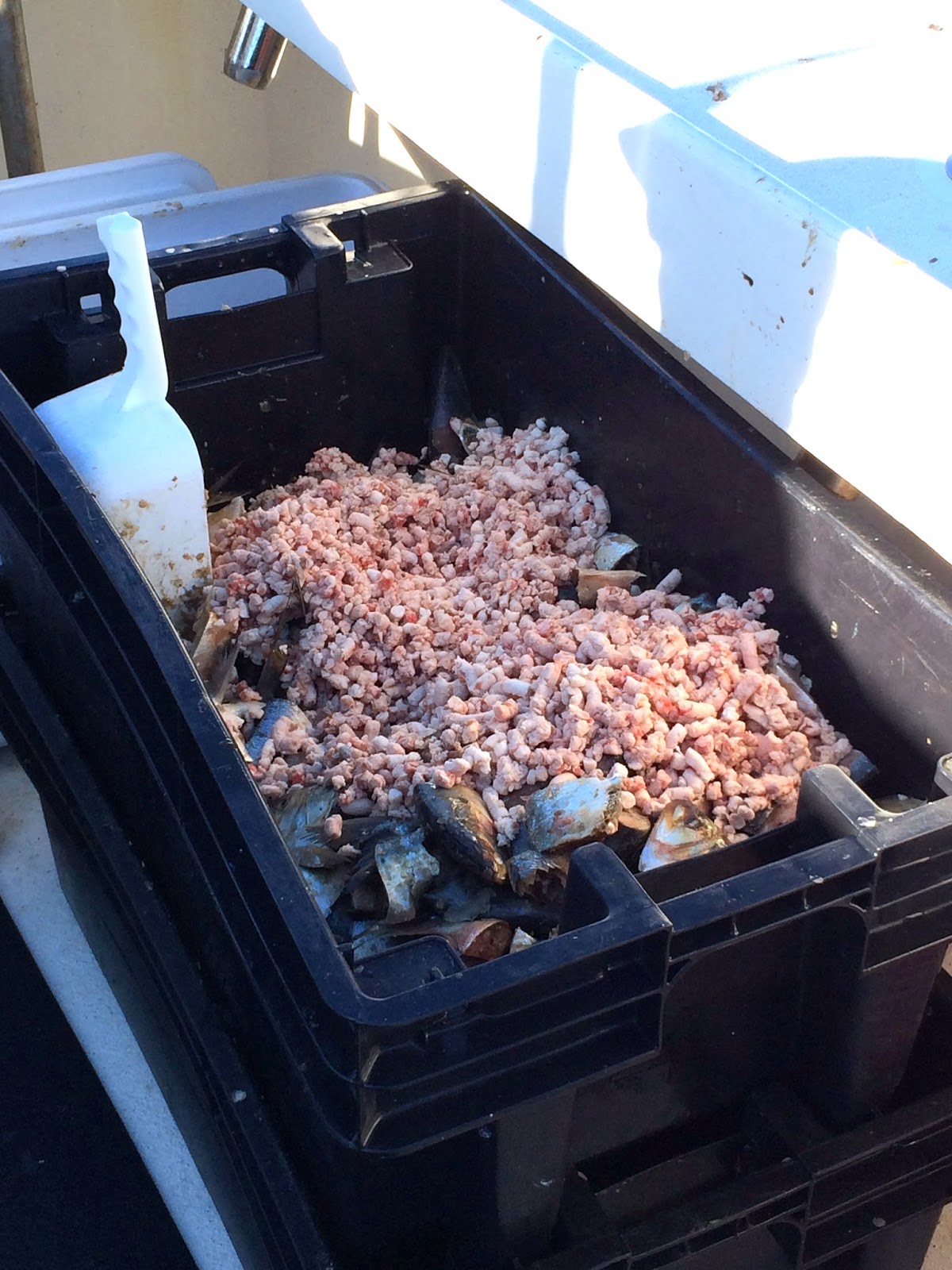 As well as the many Herring Gulls that are now trailing the boat, we start attracting other species too... 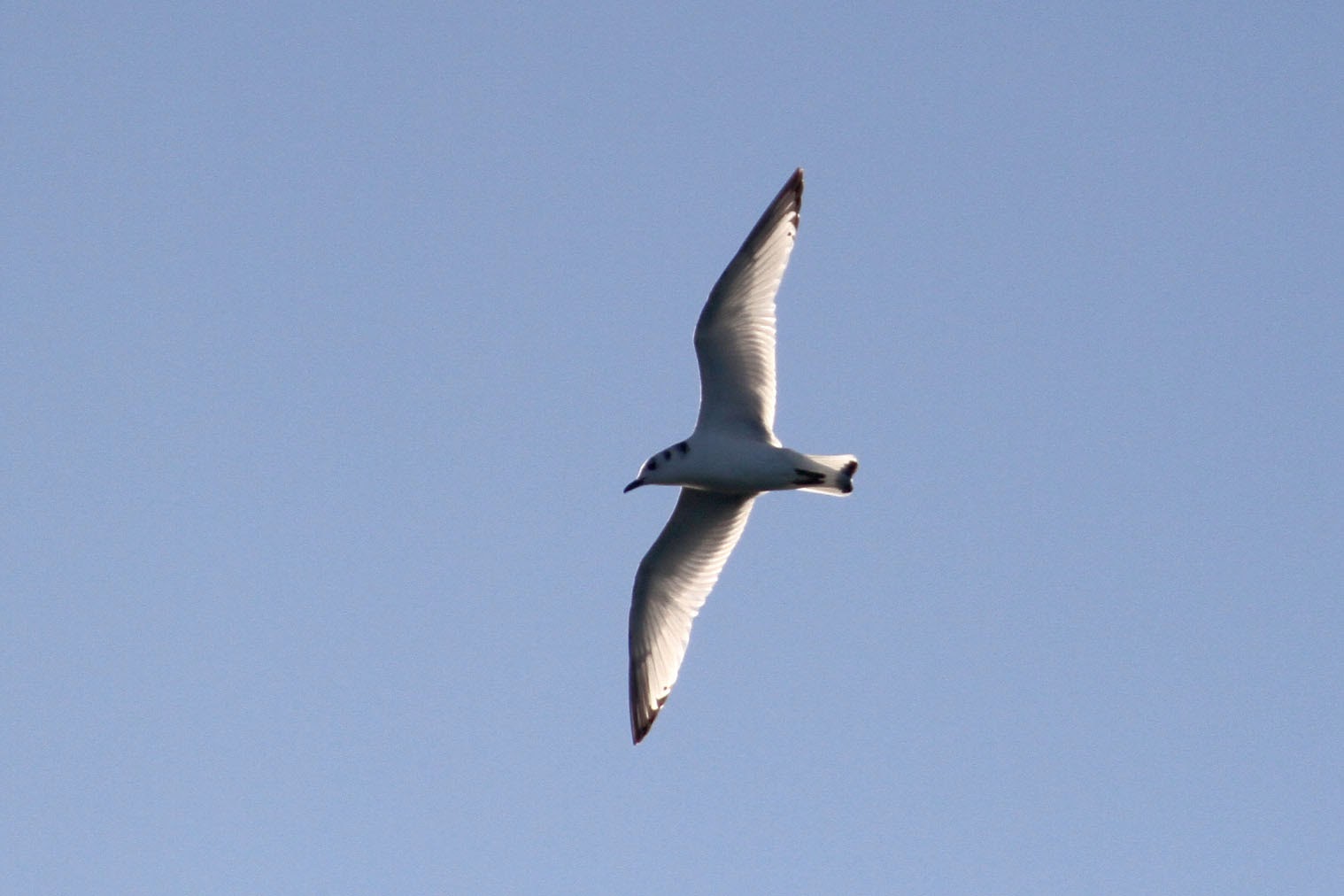 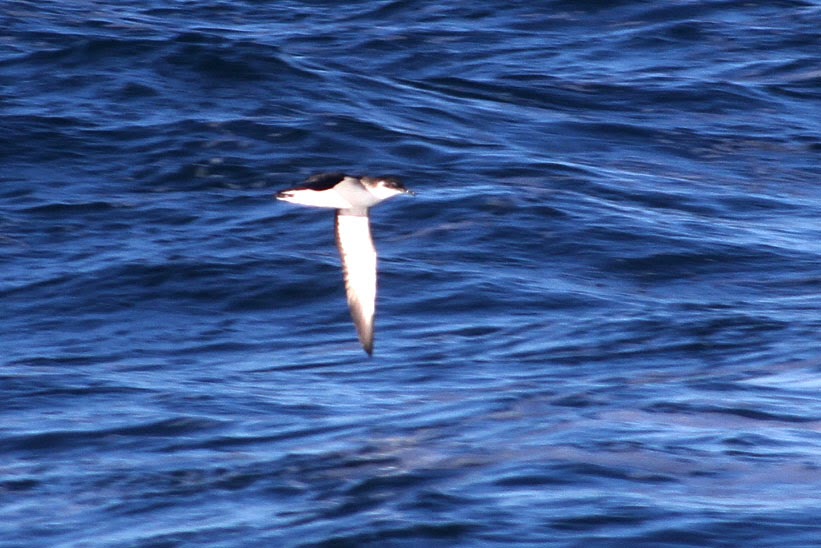 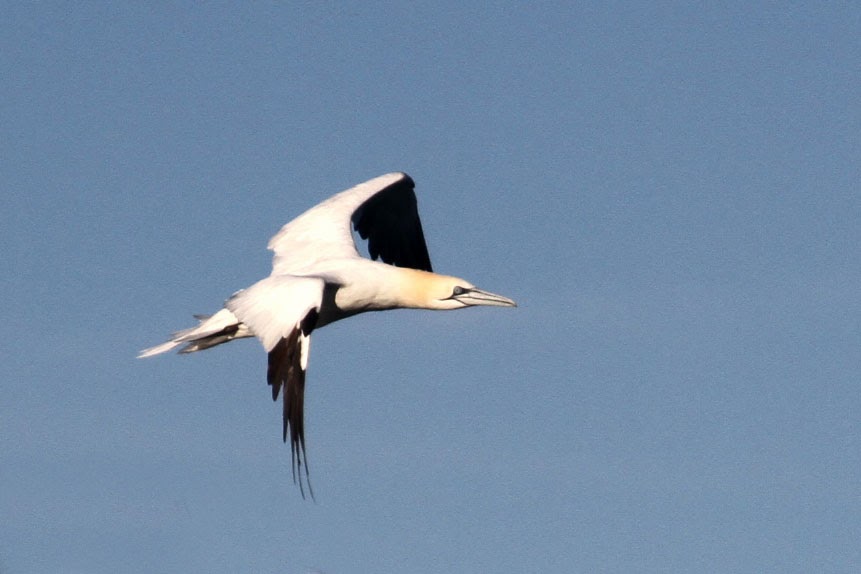 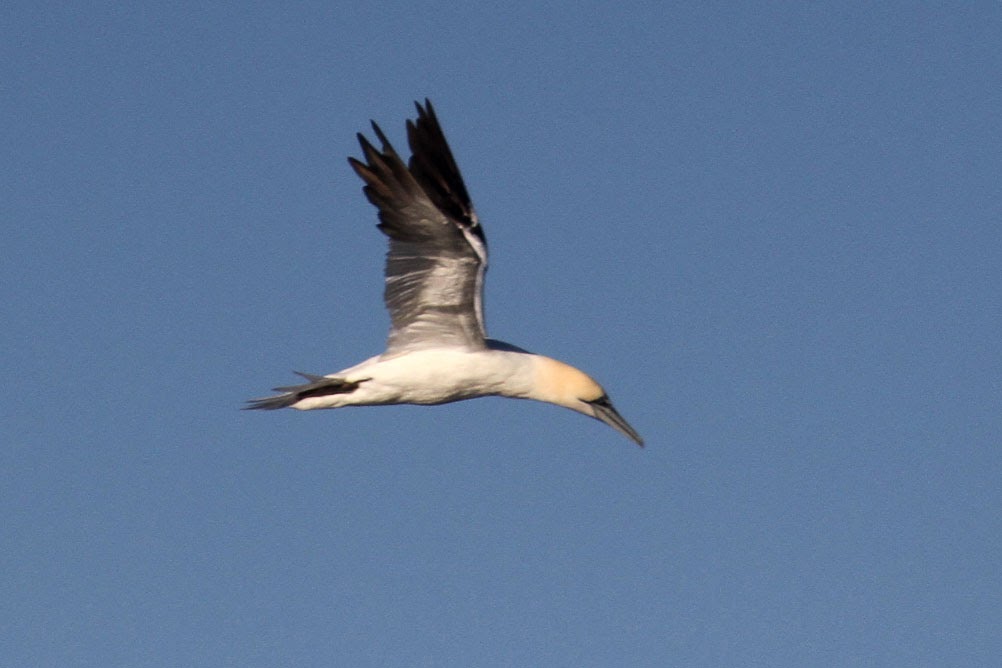 Northern Gannet. Preparing to dive-bomb into the sea.

As well as the birds, we also spot a Hammerhead Shark and Loggerhead Turtles. 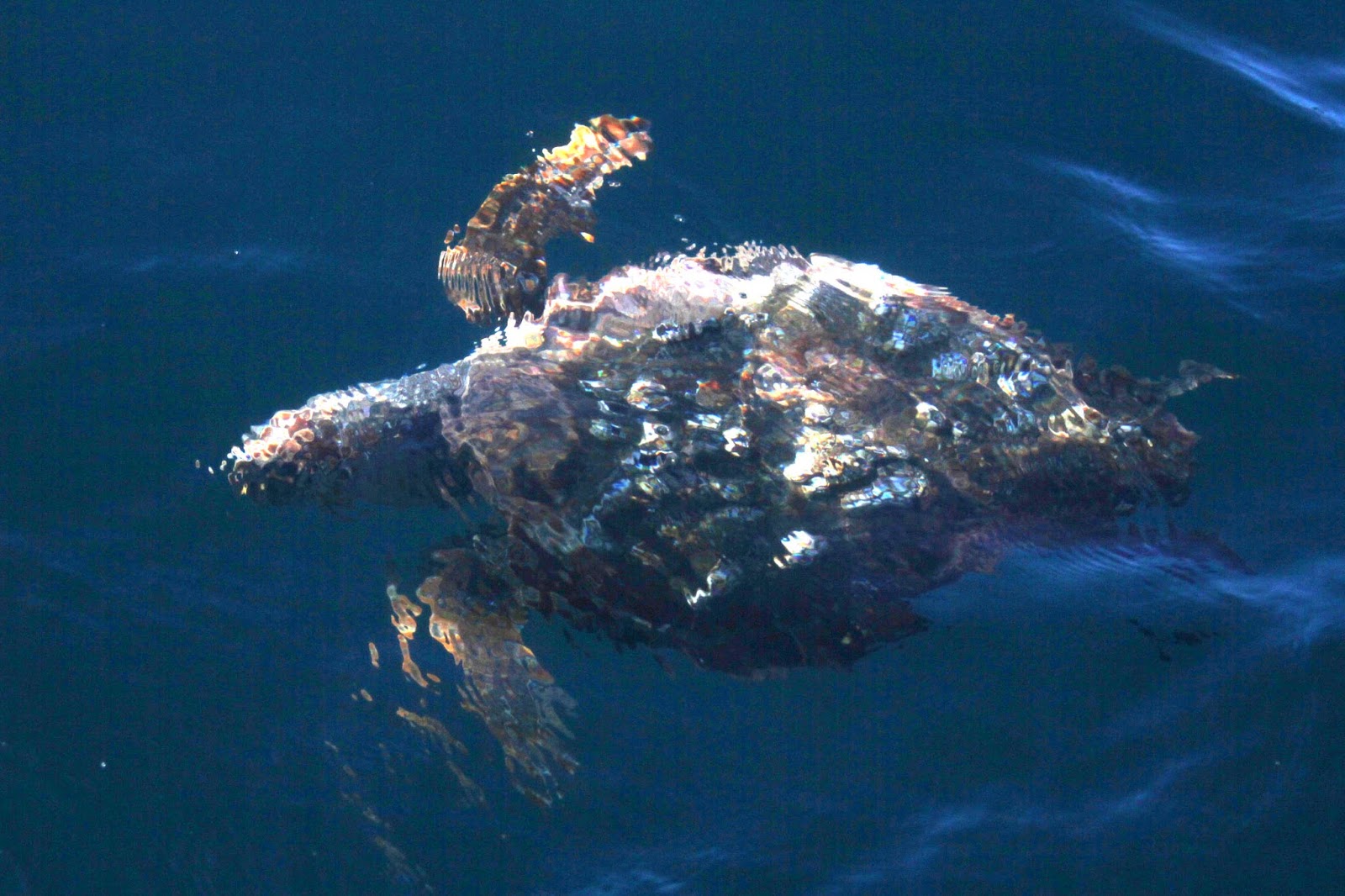 Loggerhead Turtle. One of a pair.
Notice the barnacles on its back.

We're having a great time - we've seen a very impressive range of birds and sea creatures. The screaming cacophony of gulls continues to flap, dive, glide, beg and even use my shoulder as a bathroom (that's lucky, right?) In fact, the gulls are doing everything except what they're being fed to do: attract a Great Skua.

Skua is the only bird name derived from the Faroese language. And no, that's the not language used by Ancient Egyptian rulers. Think further north: the Faroe Islands - a rocky archipelago belonging to Denmark that's actually closer to Norway and Scotland. Great Skuas breed there, as they do in Iceland, Norway and Scotland (where they're called Bonxies.) They're large, heavy gull-like birds, that are chocolate brown. They winter in the Atlantic Ocean and survive on a piratic lifestyle - harassing gulls and gannets, scaring the hell out of them until they drop their food, which the Skuas greedily scoop up. 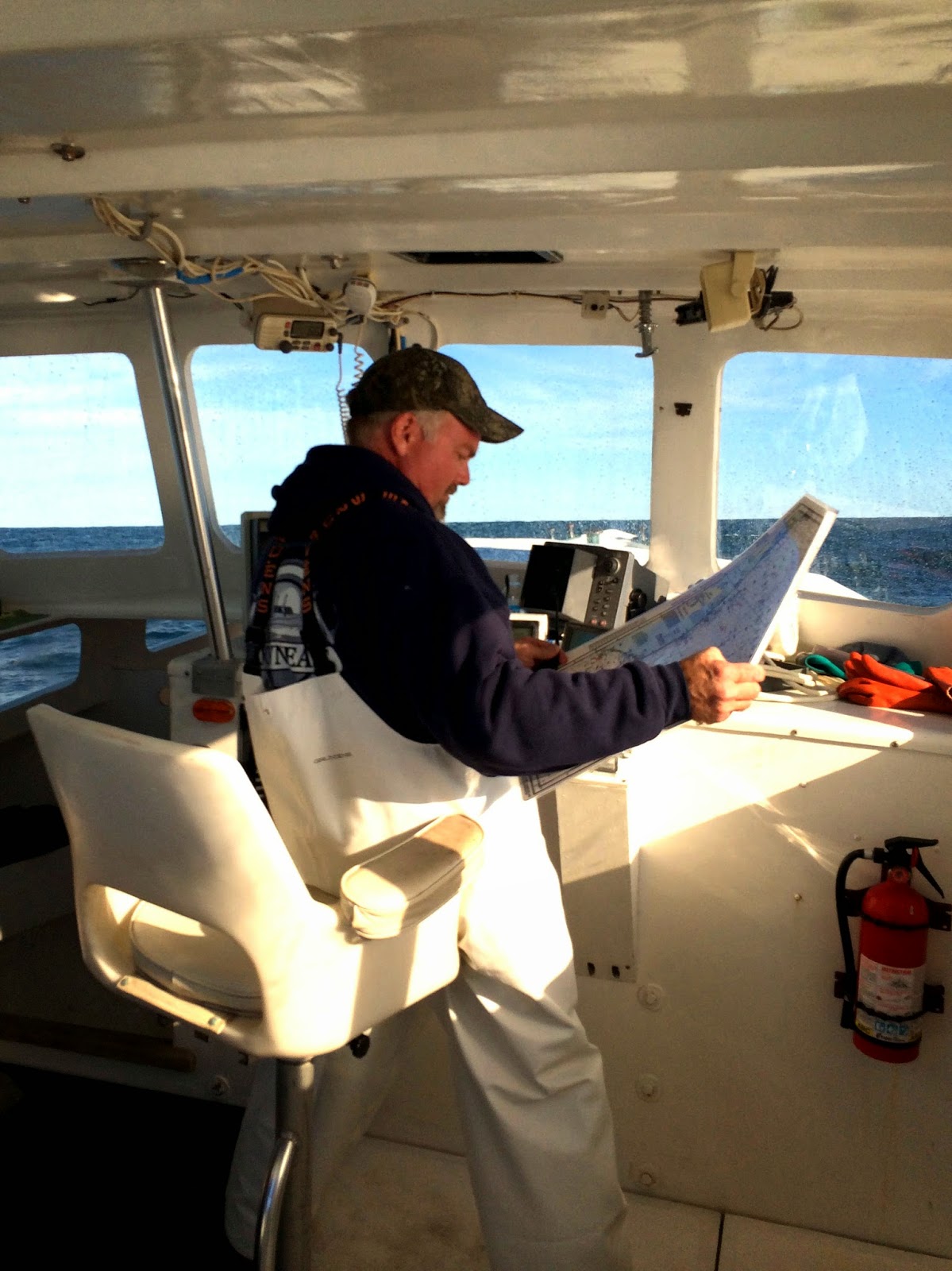 "Damn it! This map doesn't have Skuas on."

Despite the season and the snow I left behind in Boston, out here at least, it's a beautiful, balmy day. Blue skies. Warm breeze. I'm just thinking about putting on some sun block, and whether I really did leave the iron on, when...

It starts so softly that I first think it's that's voice in my head, the one I'm mentally practicing for when I spot one and can shout it out. Or that I'm mentally willing someone else to shout. And then again, much louder...

The shouting is coming from Nate, and he's pointing at the back of the boat. This is it. It's really happening. (Must pay attention!) Kate immediately gets on the bird.

"Going left. Below the horizon. Going away from the boat."

I'm not on the bird. Did she say away from the boat? Still not on the bird. Away doesn't sound good. Maybe this is all we're going to get? What if I...and then I see it. A dark speck moving left. 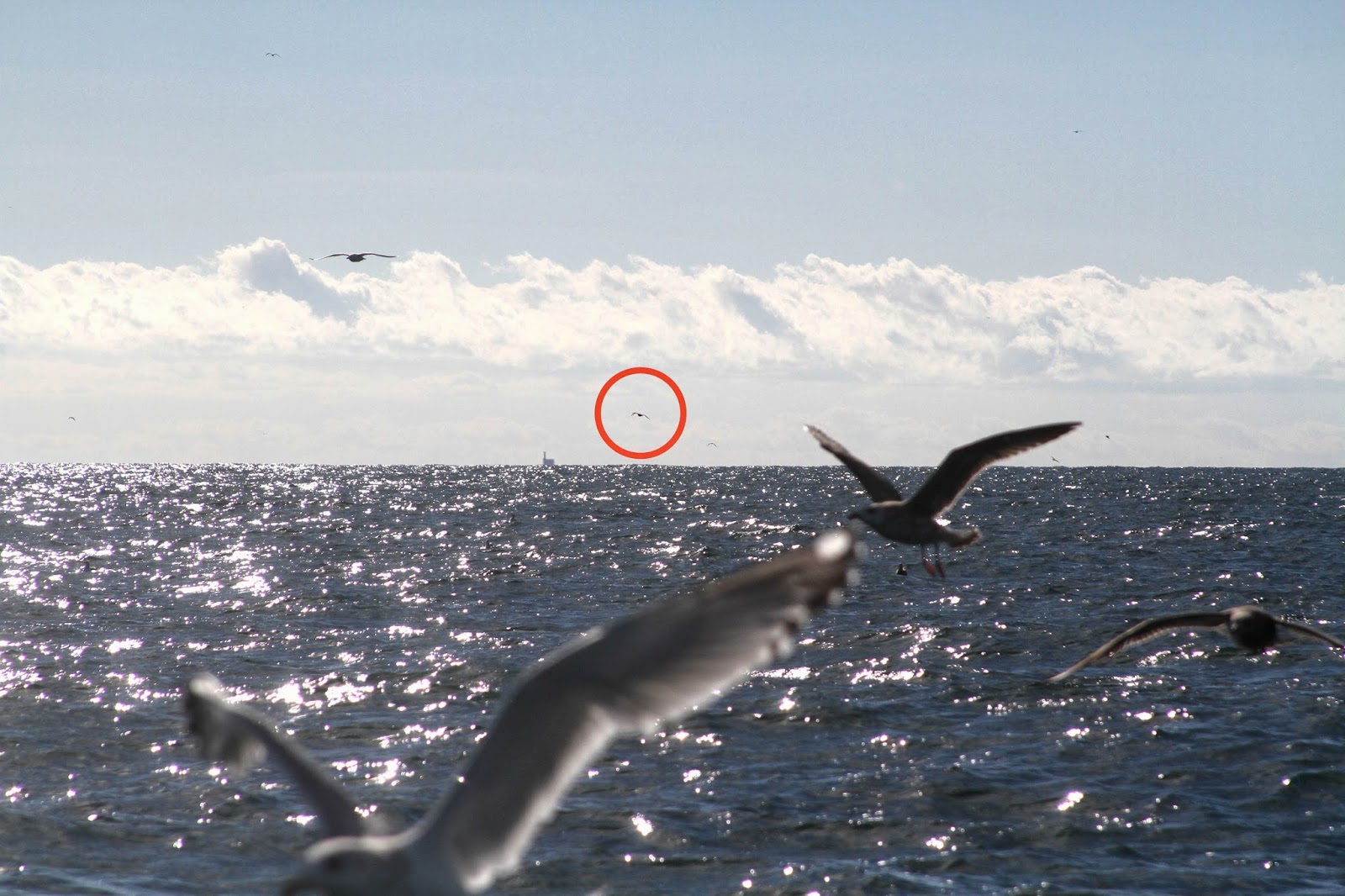 It's a terrible view, and I'm aware that Jay is not on the bird. Hey you ungrateful Skua! Come and check out all the gulls we've been feeding! And then, it's almost like the bird hears my thoughts. It banks and starts beating its heavy wings in our direction. We watch as the bird circles and starts chasing gulls. Even without my binoculars, I can see the bright flashes of white in the wing. As the light hits its back I can see the beautiful gold flecks. And, like a July 4th pyrotechnic display, I can hear "oohs" and "aahhs" coming from some very happy birders around me. 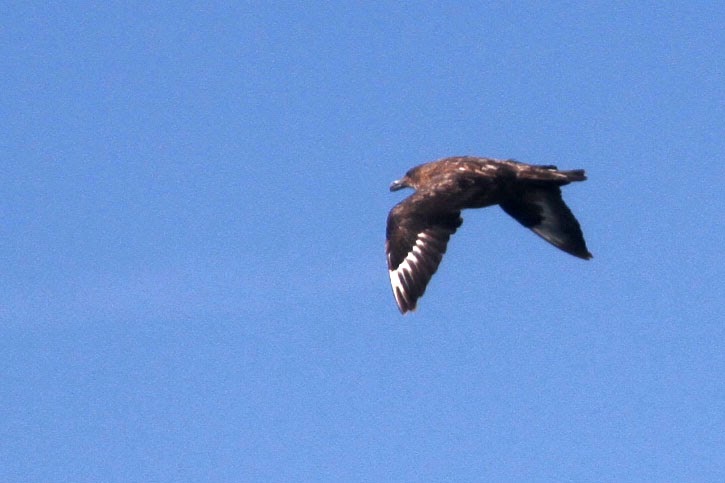 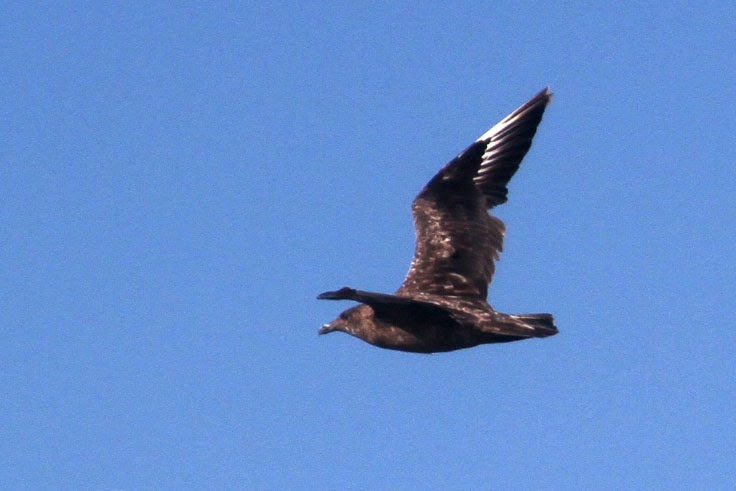 Great Skua. Notice the large amount of white at the bases of the primaries,
and the gold flecking on the chocolate brown upperparts.
The bird is large and very heavy with a powerful bill.

The sense of relief is palpable. It's a life bird for Bruce and Lynne, and an important year bird for Jay and I. 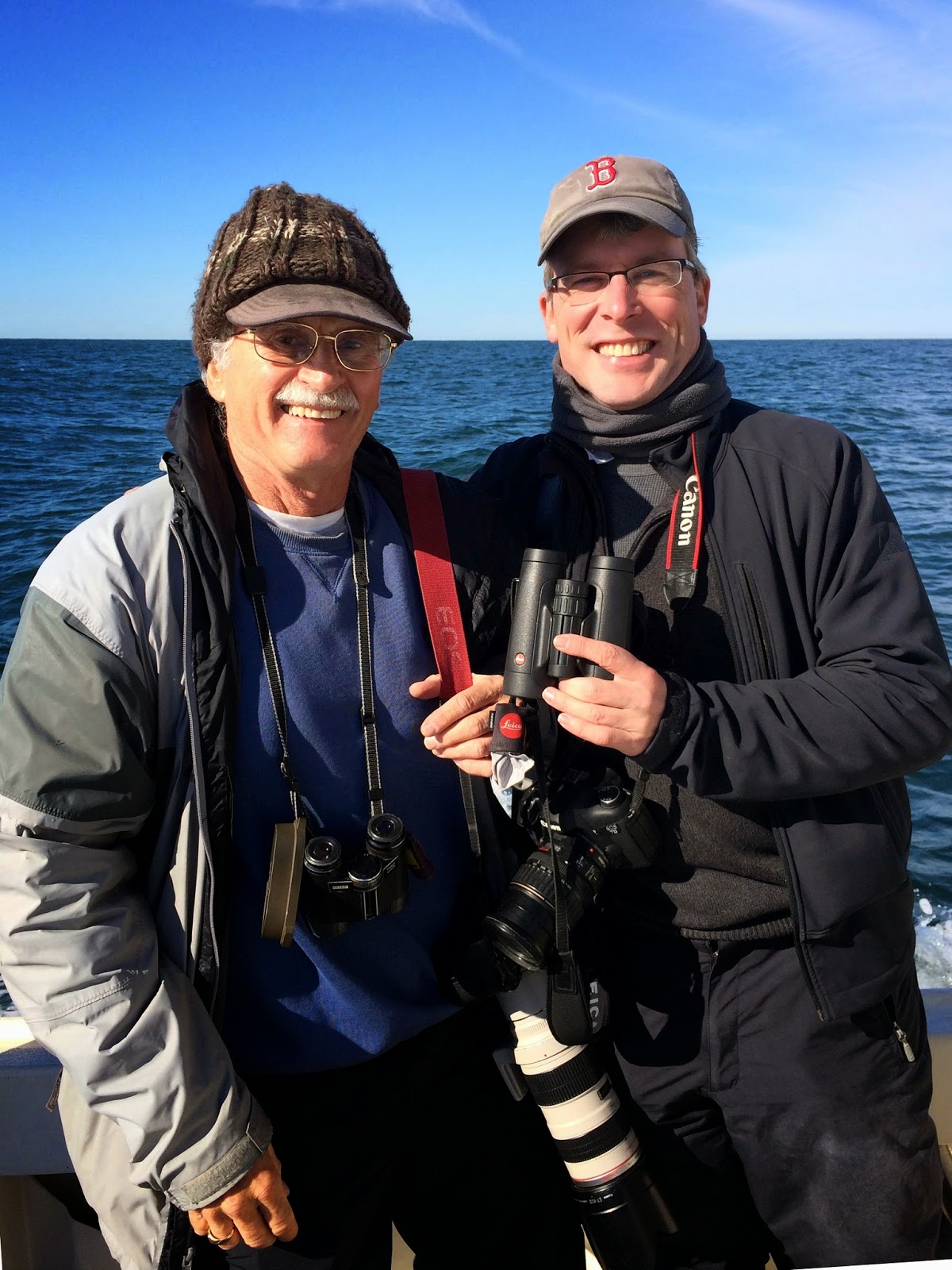 Great Skuas are not as accommodating as their cousin, the South Polar Skua. They generally creep up on gulls, then sneak away just as fast. They have little curiosity about boats, and once found, don't stick around for long. Apparently (and thankfully) this bird didn't read the guidebook. We were treated to an amazing show - we watched the bird for several minutes as it flew round in circles, landed on the water, chased gulls, and, in one final and incredible gesture, flew right by the boat. (Thank you!) I've seen Great Skua in Massachusetts twice, and this was by far the best view.

We continue chumming all the way back to shore, which brings in some new birds, including a Sooty Shearwater: 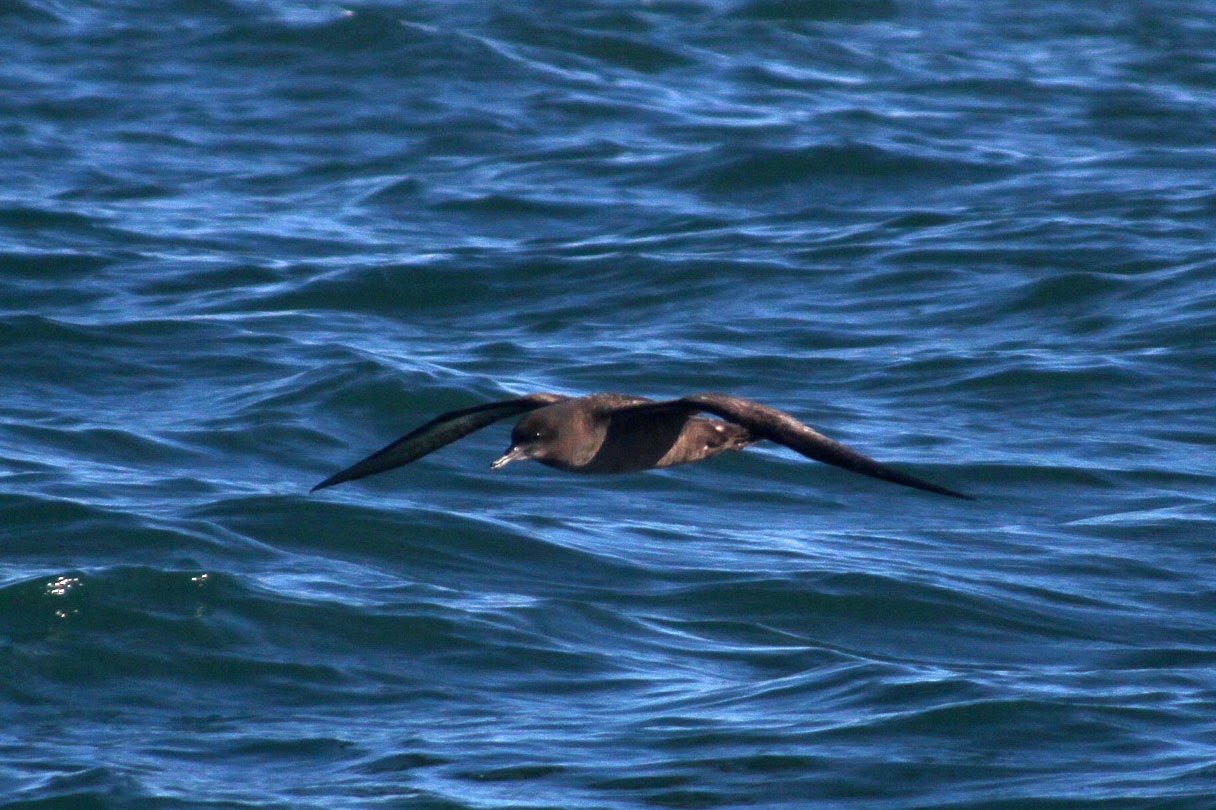 as well as large numbers of Lesser Black-backed Gulls - a very uncommon bird anywhere else: 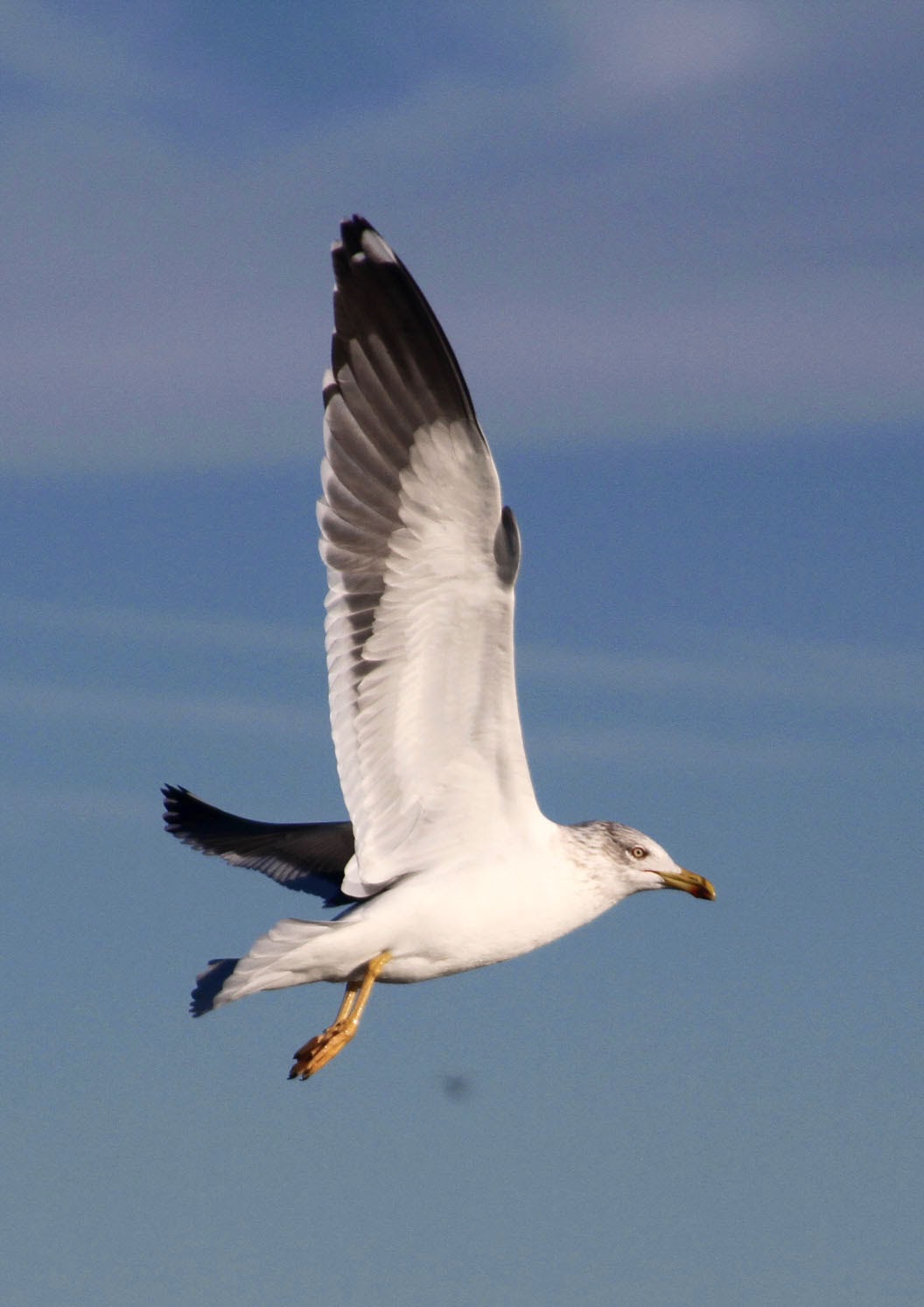 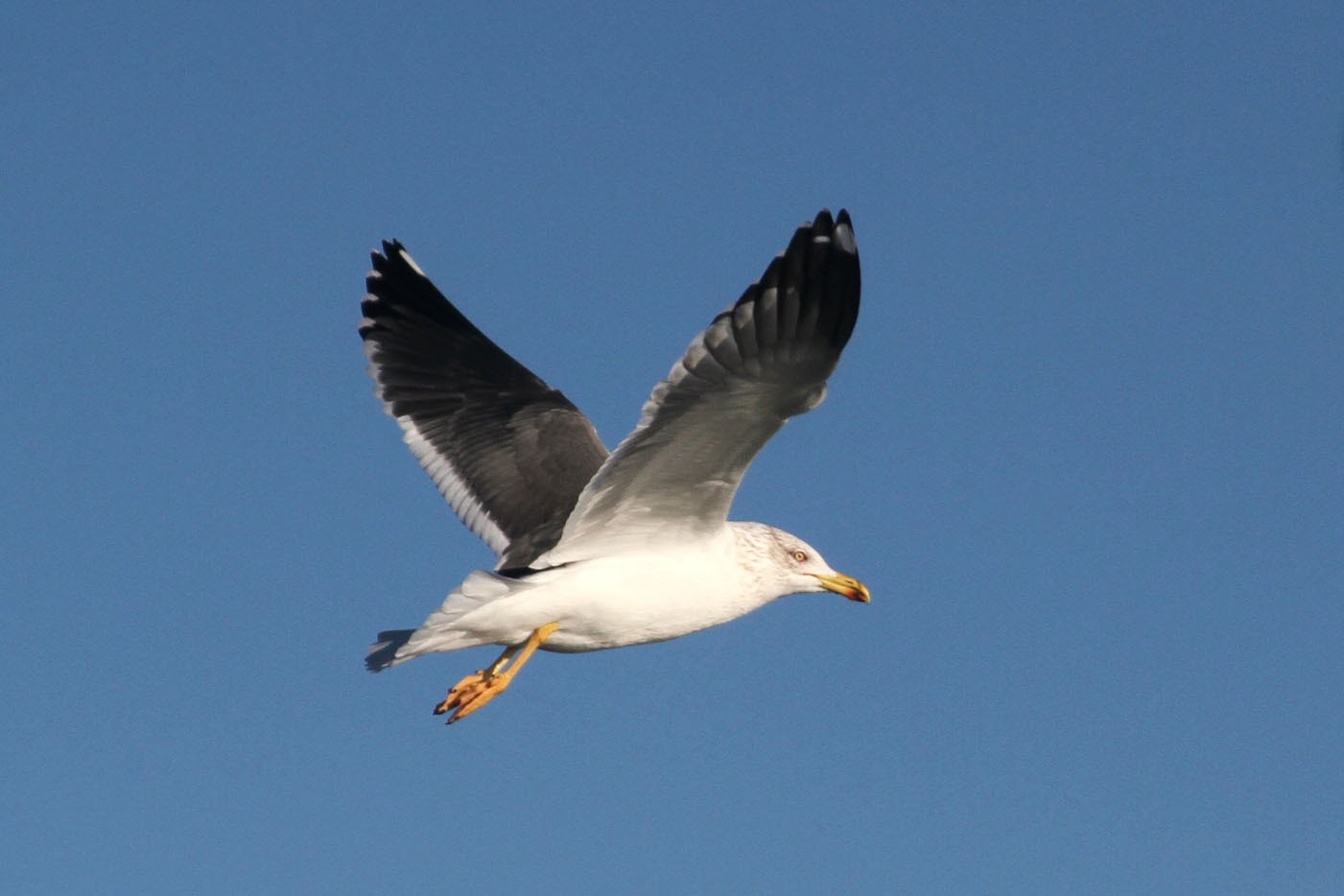 And as we get closer to shore, we start seeing pelicans: 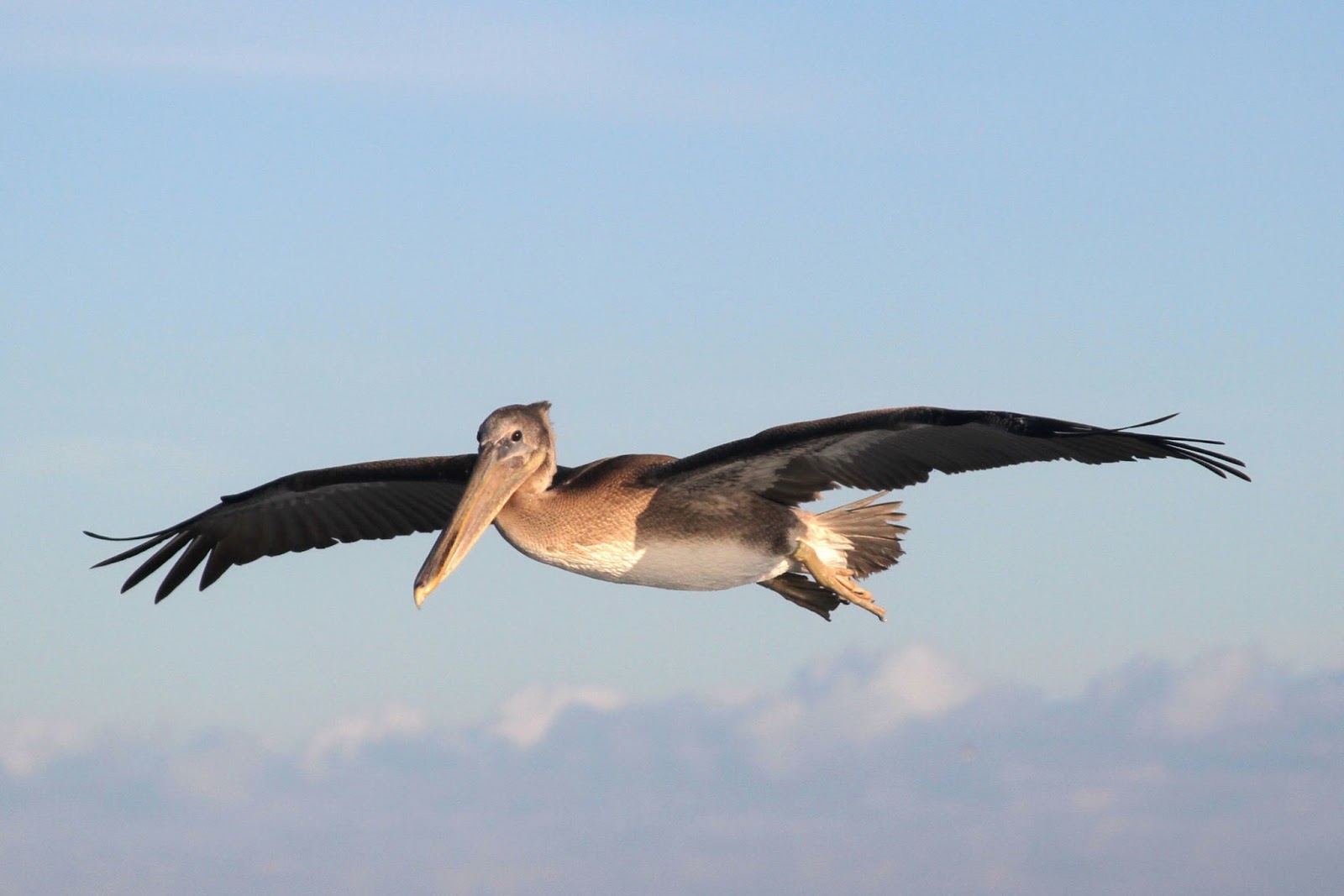 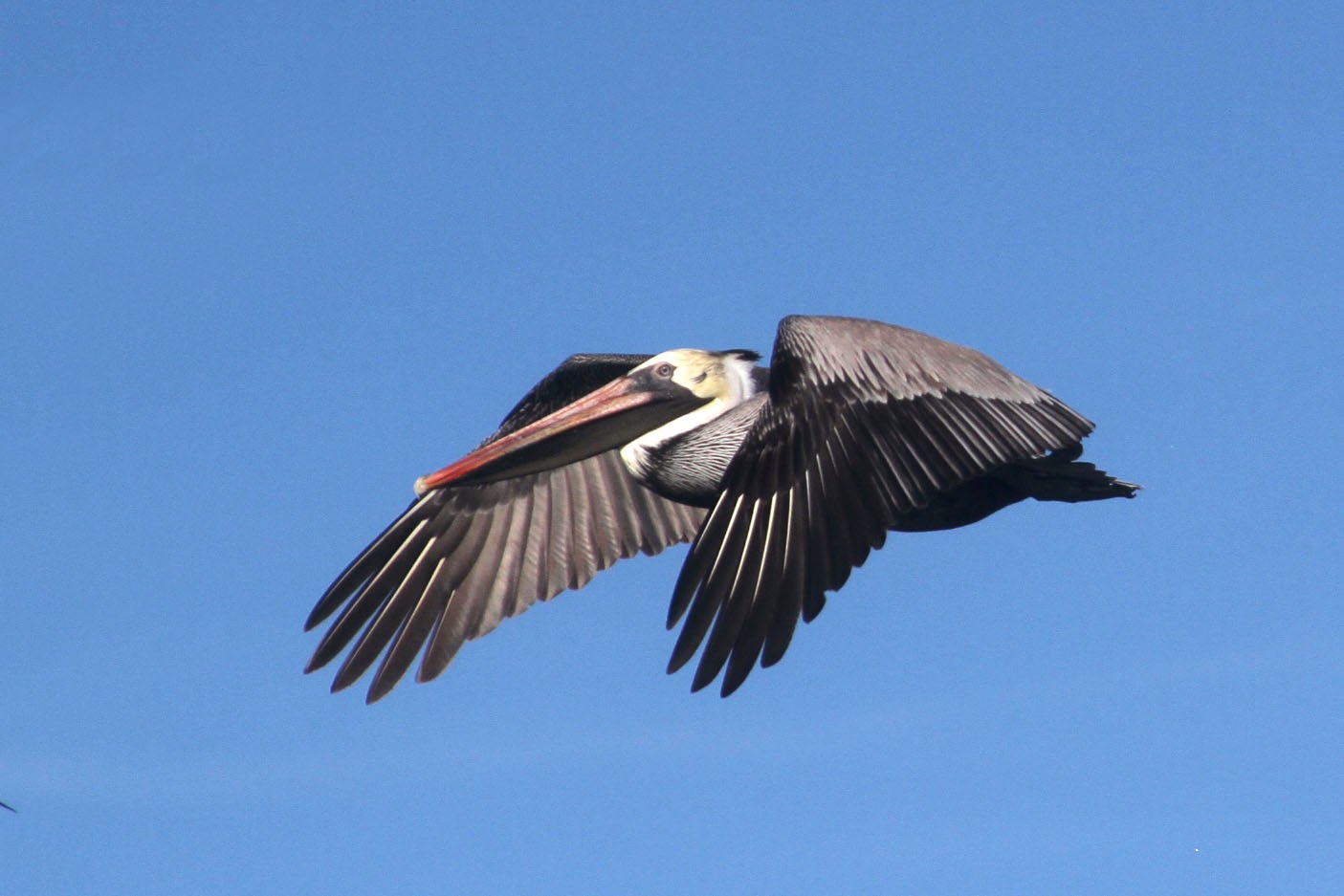 Thanks to Brian and Kate for a wonderful day. They have such an amazing record for finding difficult birds like the Great Skua. It might look easy, but it's not: there's years of experience involved and knowing where and when to chum. Thanks for delivering again! 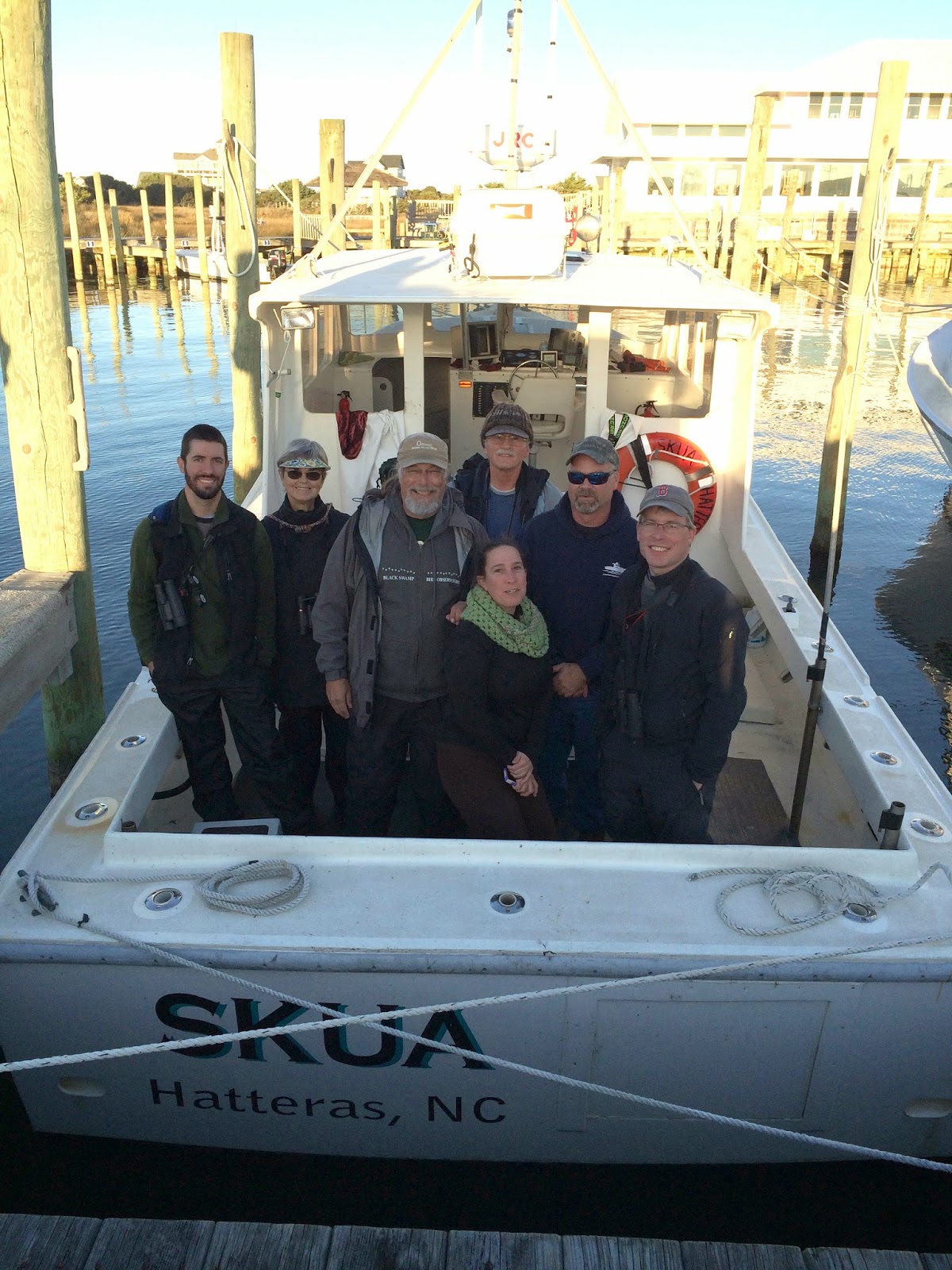 Six hours later, Jay and I are toasting champagne at Chris Hitt's house in Chapel Hill. What are we celebrating? To big years! Chris did one in 2010, and Jay and I are just finishing one in 2013.

Great Skua was big year bird #746 for me - and very possibly the last bird of the year. There was a lot of excitement today about beating the ABA big year record - set by Sandy Komito in 1998 (who - perhaps ironically for the day - had SKUA as his license plate.) He saw 745 birds, plus 4 that were new to the ABA region (745+4.) Three of those would eventually be accepted by the checklist committee giving him a final total of 748 (745+3.) I started the day on 745+3 and ended on 746+3. Have I beaten the record? Maybe. (It would be nice!) But none of my provisional birds (the 3 species new to the ABA - Rufous-necked Wood-rail, Common Redstart and Sparrowhawk) have been voted on yet, so I'll likely not know definitively until next year.

So. Back to the champagne: to big years! It's fun to compare big years - and even more fun to potentially set a new record (especially one held for 15 years.) I never set out to break a record, and the person I was competing against most of the year was myself. Could I plan things better? (Yes.) Could I be better at identifying birds? (Hell yes!) Could I have done things differently? (Absolutely.) Could I have seen more birds? (Yes - hint: start at the beginning of the big year.) Could I have had more fun, met more amazing people, seen more spectacular places, learned more about myself? Probably not. That's what the big in big year means.

And so, to a big year! They don't come much bigger than this.