It's July, and I'm already questioning the sanity of a BIg Year. I'm pondering this while contemplating spending my 3rd out of 4 nights in a non-standard sleeping structure (car and plane) and after standing for 4 hours in 100F heat with no shade staring at a distant patch of cattails. Oh - and after almost sliding off the road in an epic thunder-storm and resultant flash floods. And heading to a red-eye back to Boston after flying in only a few hours before. Really, who does this for fun? 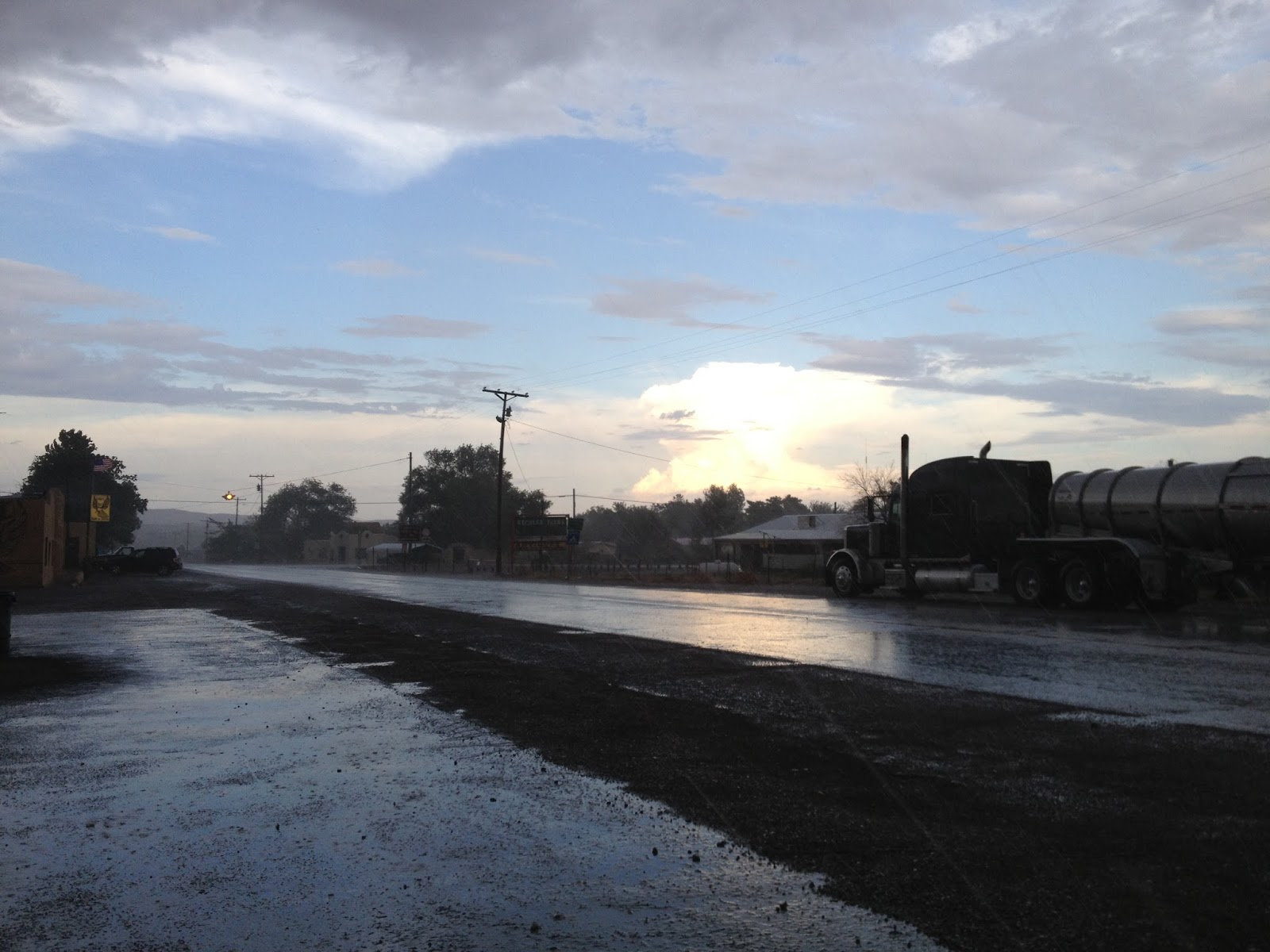 Seeing the brightly-colored chicken-like bird emerge from the cattails somehow manages to make all the above seem entirely irrelevant. The funny chicken is a Rufous-necked Wood-rail, and as well as being ridiculously cute is my first ABA first.

Bosque del Apache is a wildlife refuge on the Rio Grande about 90 mins south of Albuquerque. Yesterday, Matt Daw was videoing a Least Bittern, when a large, reddish rail walked right in front of it (see here for the movie.) This was the first report of this bird in the ABA area, and birders across the country were suddenly wondering how to get here. The bird has been frequenting this area… 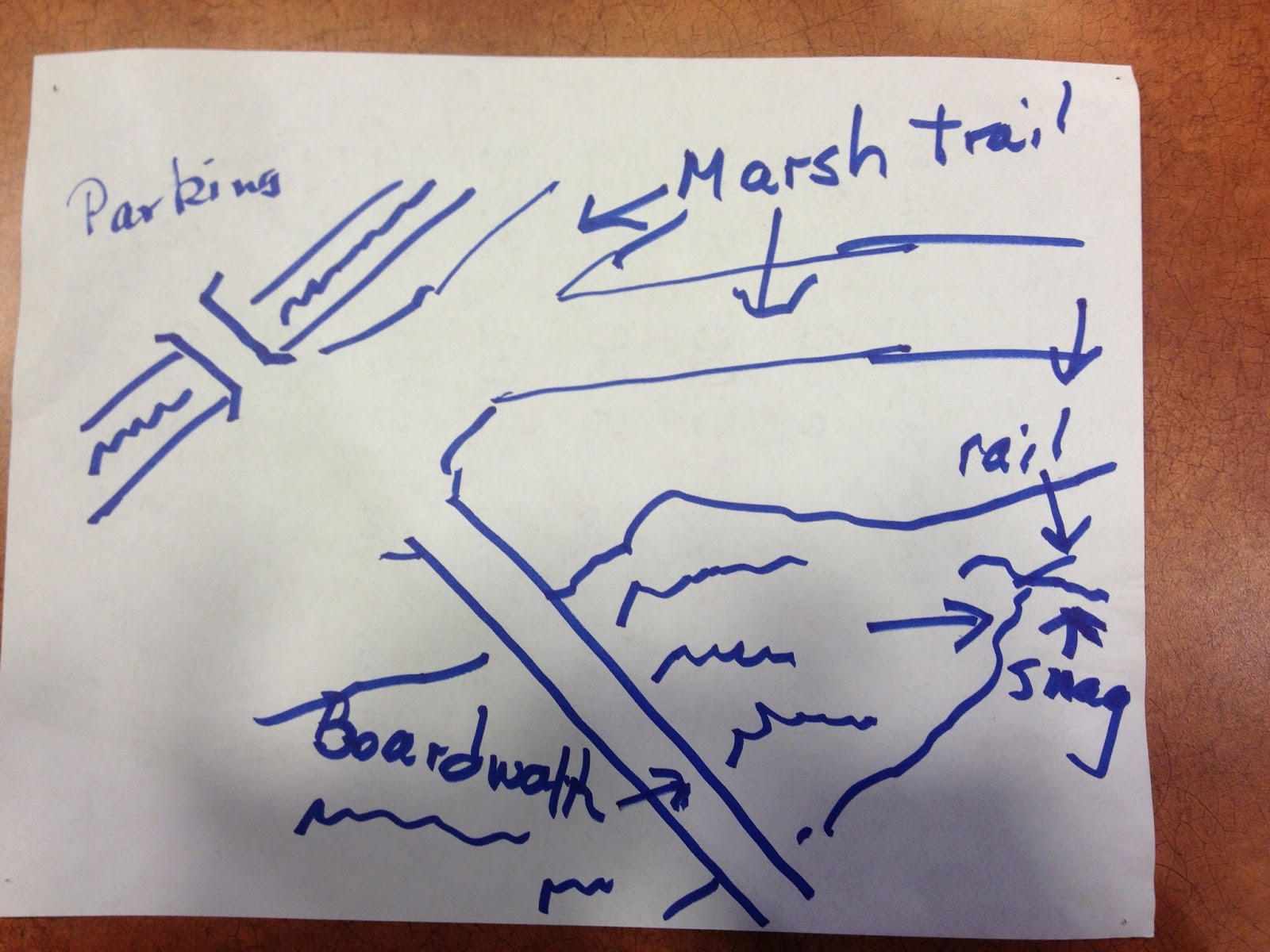 Handy Wood-rail map at the refuge HQ.
Which looks like this... 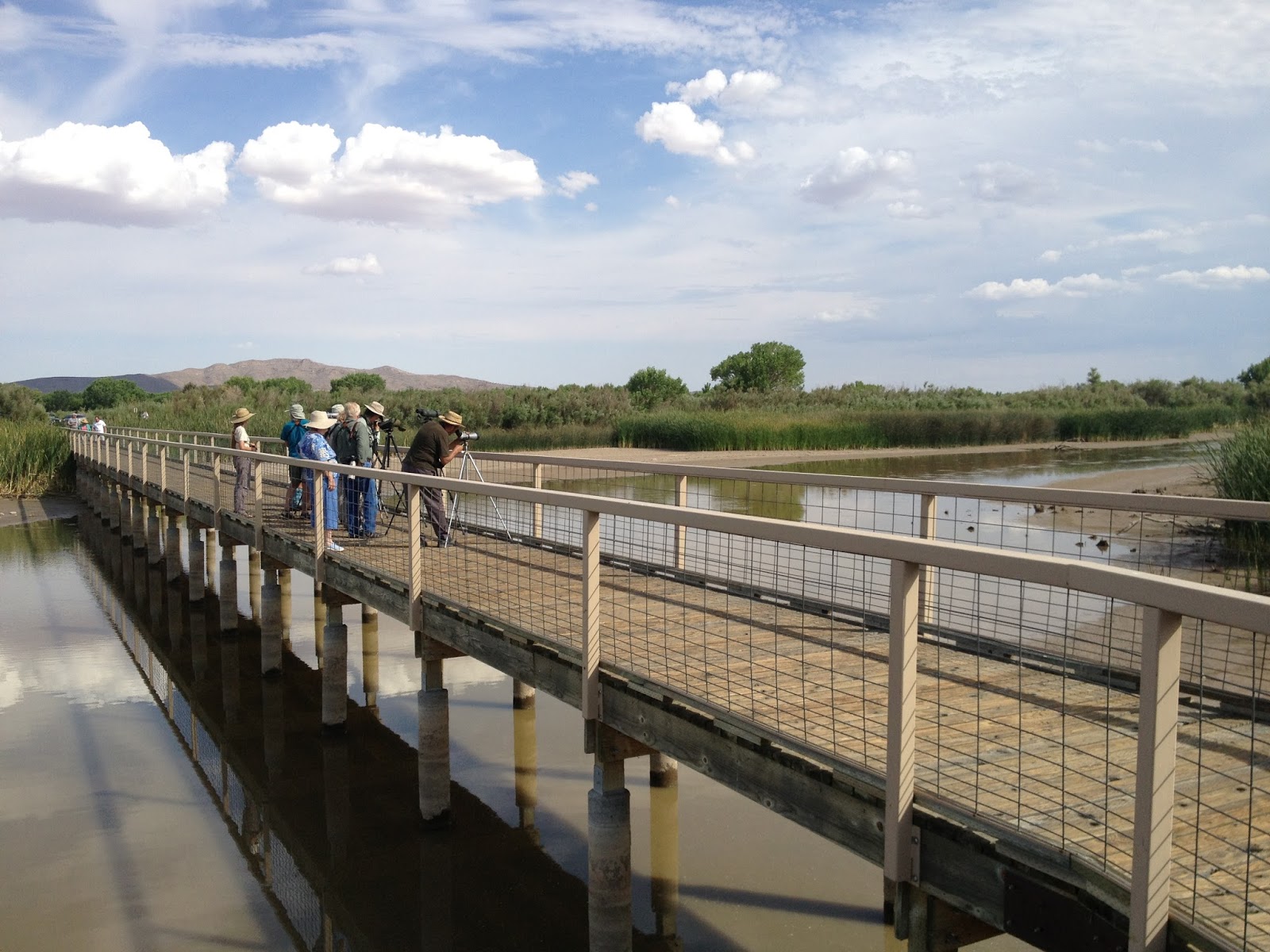 Birders searching for the Wood-rail

As I arrived, 3 birders were standing on the wobbly boardwalk bridge. Suddenly energized, they started frantically aiming and focusing their scopes. I'd arrived just as the Wood-rail was being seen. I didn't immediately realize how lucky I'd been with my arrival - these guys had been here waiting for 1.5 hours. The bird was at the far end of the pond (far right in photo above), keeping close to the cattails and the resultant shade they cast. It's a large bird, much bigger than the nearby Virginia Rail and Green Heron, and walks like a chicken, tail raised as it edges its way forward. It's a surprisingly colorful bird, not just limited to the rufous neck: the nape is an almost iridescent blue-purple, the back an olive-green, yellow bill, red eye, and bright bubble gum pink legs. It's definitely an "oh wow!" bird. We watch it for 5 minutes before it slowly disappears into the cattails. 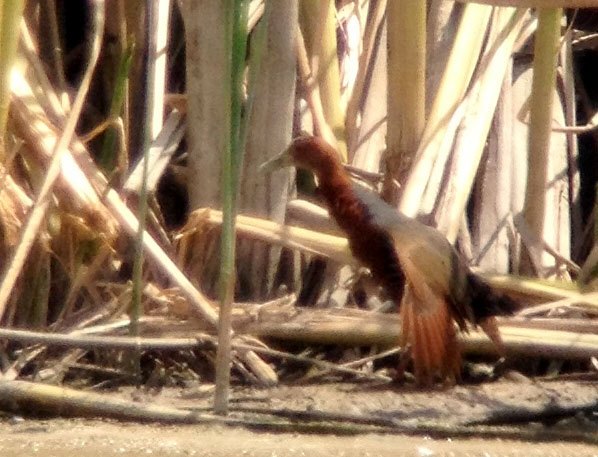 In the next 4 hours, I see birders come and go, the only constant being the oppressive 100F heat and no place to hide from it. During this time the bird puts in only 3 very brief and less satisfying views. Expecting to watch the bird all afternoon, my best views were the ones I got in the very first minutes of my arrival. It's only the second day of its stay here - but I think mornings are going to be better: the bird was much closer this morning and putting on quite a show. This afternoon the bird did exactly what I would have done - sit in the shade and nap!

Bosque del Apache I suspect is birded little in the summer - few birds, lots of heat. But there were other good birds to enjoy here today - Least Bitterns, Green Herons, Virginia Rail, Western and Least Sandpiper, American Avocet and Common Gallinule. Not a bad list for a lazy, hot summer afternoon. 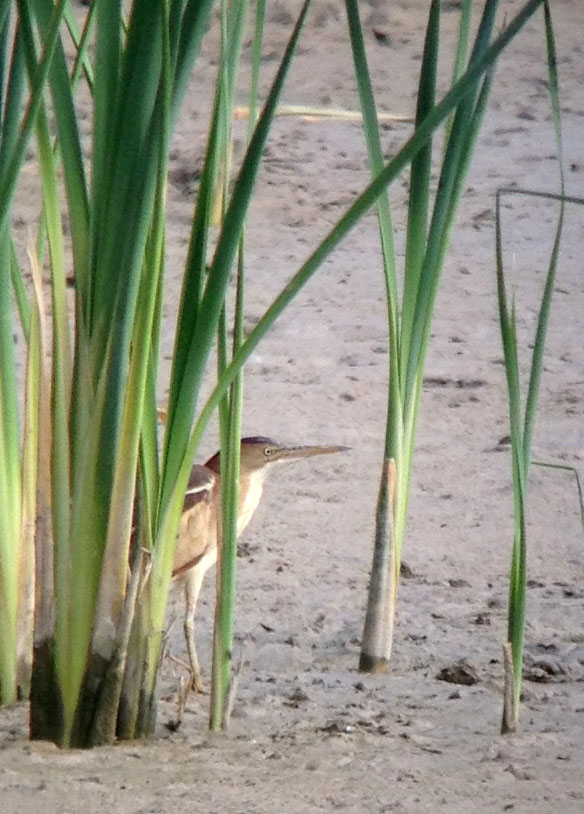 Least Bittern peeking out from the cattails.

I returned to Albuquerque airport with plenty of time for my 11:50 pm red-eye flight. As I was checking in and attempting (unsuccessfully) to print my boarding pass, I suddenly realized what a complete idiot I am. Well, maybe more of a reminder of that fact, rather than a sudden epiphany. My boarding pass wasn't printing because it was for *next* Monday, and not this Monday. I was a week too early!

The JetBlue staff apparently haven't been reading my blog. Otherwise, they'd have been more sympathetic and understood how the exhaustion of a pelagic, the drive back home from North Carolina, car sleeping, and the excitement of an ABA first can cause a grown man to mis-use a calendar. With a $350 change fee it was a painful and expensive reminder to pay more attention to details!

I was tired and hungry and looking forward to finally getting something to eat (note to visiting birders: Bosque del Apache Wildlife Refuge does not have an overly abundant supply of restaurants.) As I walked through a very empty security line I joked with the guy there that this was probably the best time to come through security. "Yeah. Unless you want to eat anything!" Ummm.what did he mean? "All the restaurants and stores close at 6pm". 6pm? You're kidding me? But he wasn't… 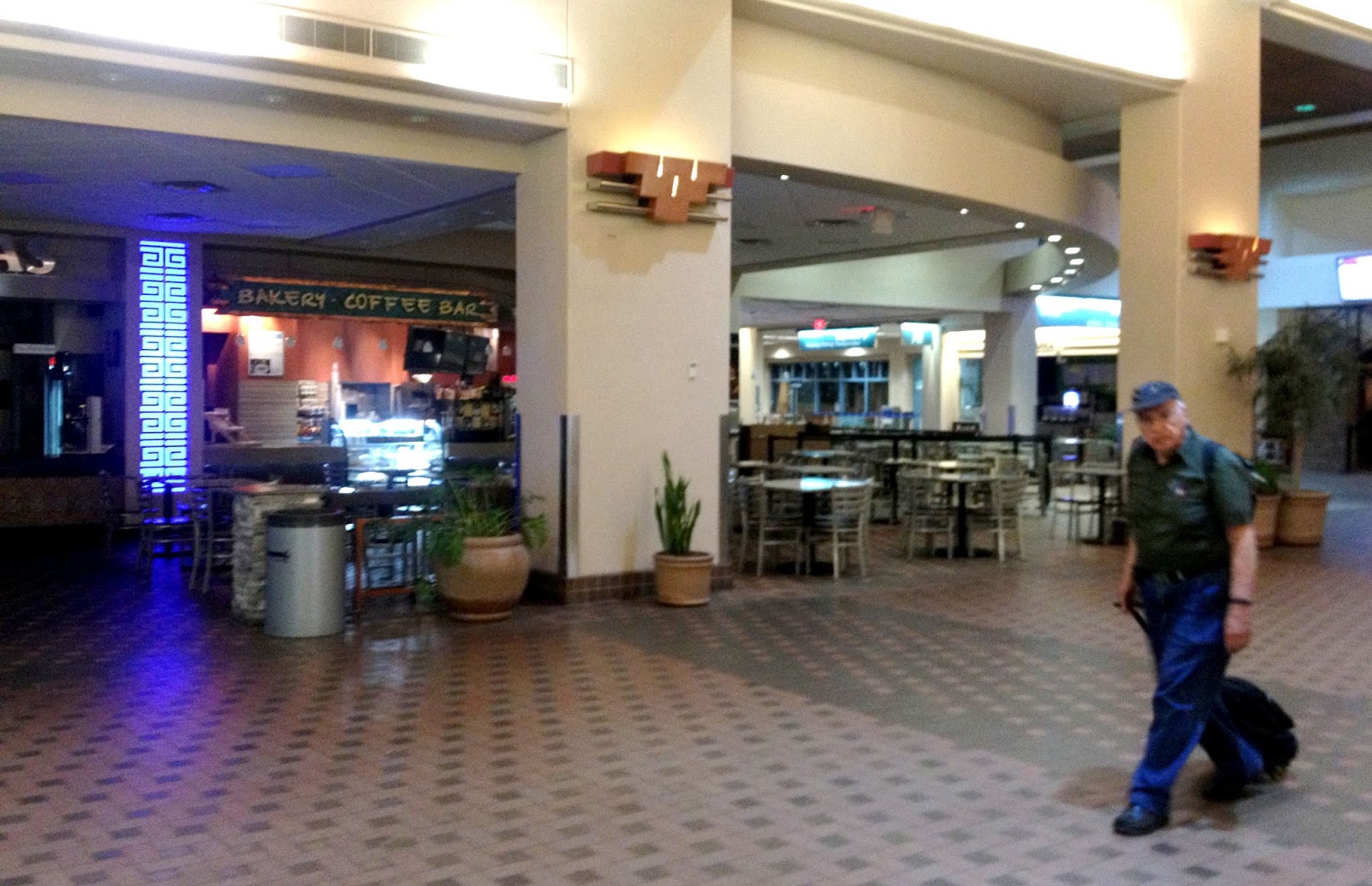 6pm? International US airport. Really? What is this, Nome??

With 2 hours to spare, and a tip from the security guy, I walked straight back out of the airport, crossed the road, and into the restaurant at the Sheraton Hotel. A tuna sandwich and a Flat Tire later, I was back to a more joyful mood. After all, I had spent the afternoon watching a Rufous-necked Wood-rail. Woo-hoo indeed!

(I'm going to list the Wood-rail separately as a provisional bird, since it's not on the current ABA list, and will need to be accepted by the ABA. Until then, it'll be a +1)