The dock was still dark when I arrived to meet the boat at 5:15am. All was quiet except for the creaking of boats gently pulling against their harbor moorings, seemingly trying to slip free unnoticed. Our captain, Brian Patteson and bird-spotter Kate Sutherland were there to meet us. Brian's been running pelagic trips for years out of Hatteras, and he's an expert on these waters. He's quiet, calm and focused - with an obvious love and admiration for seabirds. We were in good hands. 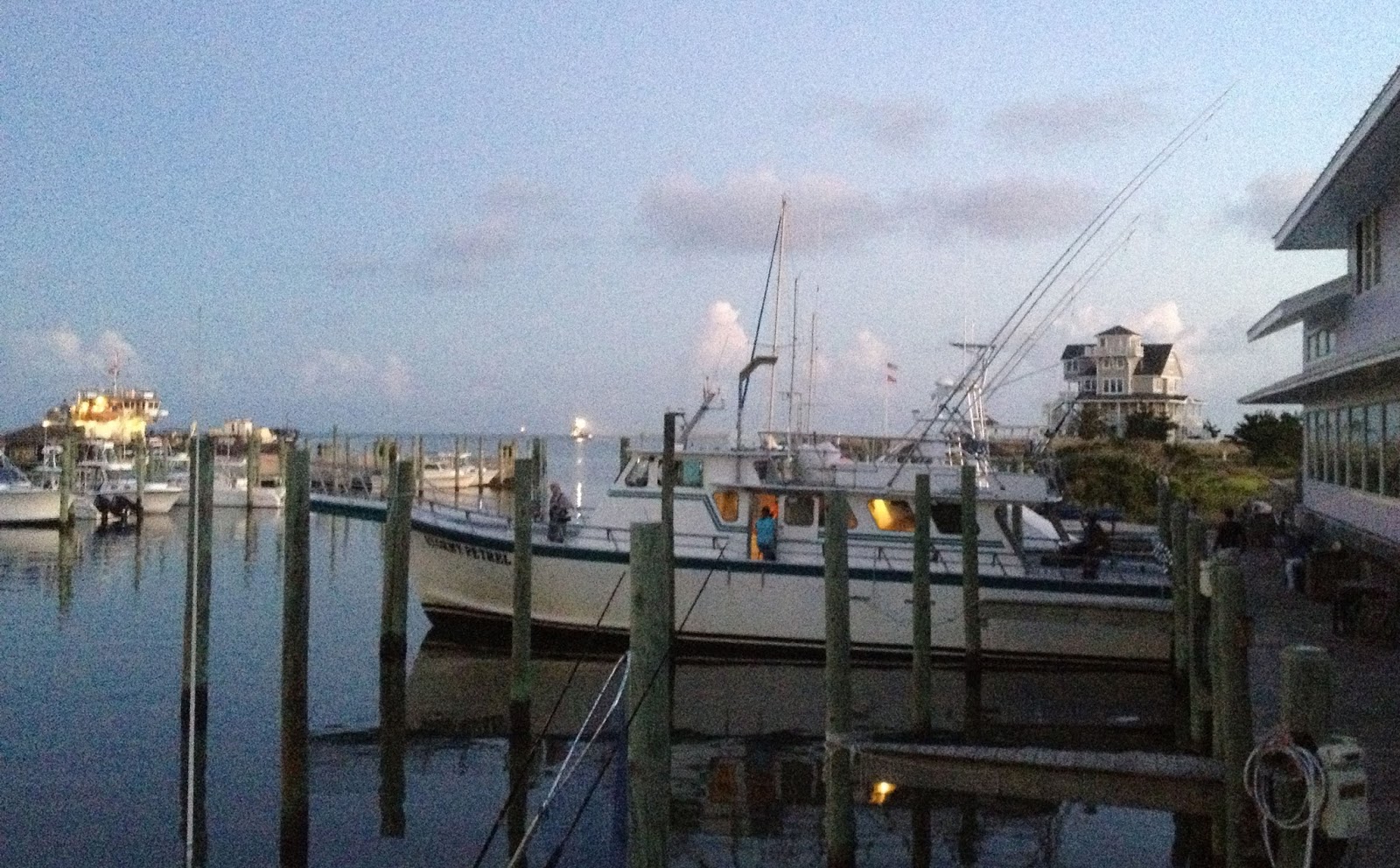 The Stormy Petrel II. Our marine home for the day. 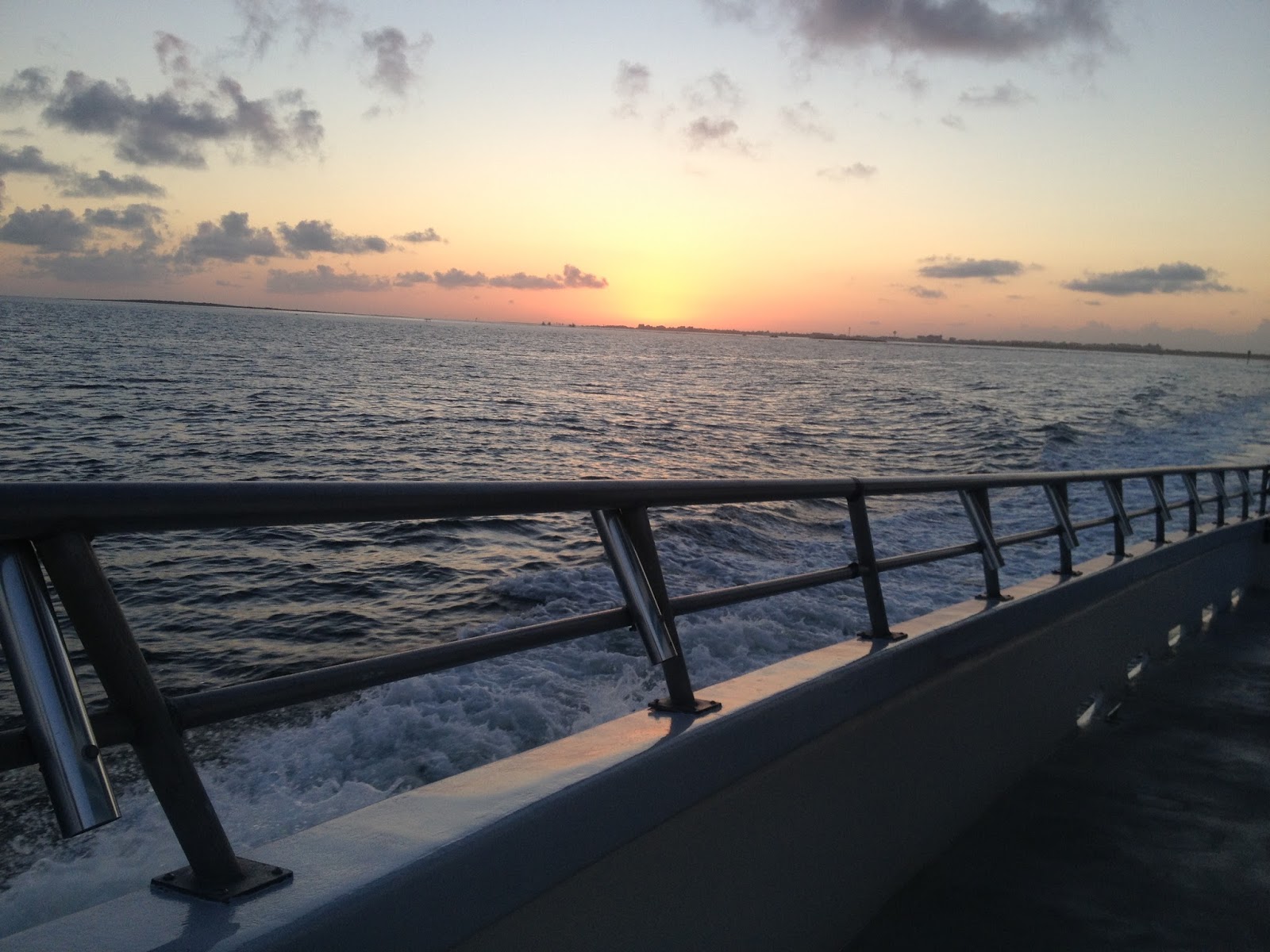 It's a 20-25 mile trip out to the continental shelf and the gulf stream. The warmer waters and the upswelling at the shelf is where the birds are, attracted by the rich fishing. As we head out, we encounter a single Bridled Tern, riding the gentle current atop a buoy. Bridled Terns are often found on flotsam. The latter provides a useful perch, as well as feeding grounds - fish are attracted to the shade and the feeding potential provided by the flotsam micro-environment. 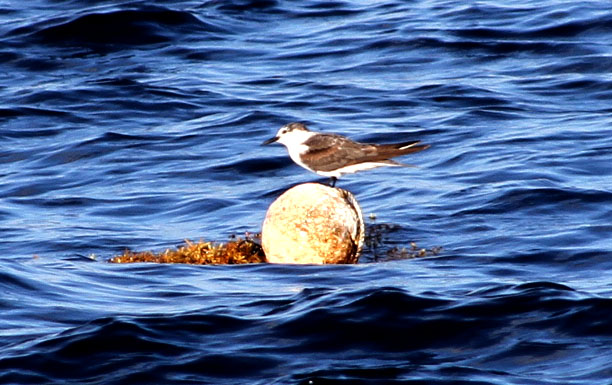 As we reach the gulf stream the loud-speaker buzzes with Brian's excited call: "Black-capped Petrel",  a Pterodroma petrel that glides like a shearwater and arcs high over the waves (usually in much windier conditions than today.) Amazingly (having only ever seen one before - in MA) this will be our first of at least 8 birds for the day. 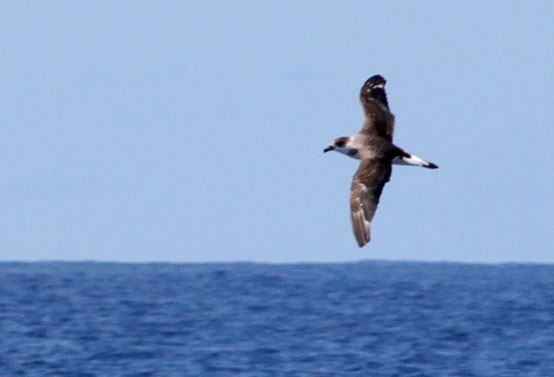 Black-capped Petrel. Notice the white collar giving the bird an obvious cap.
The white in the tail is distinctive and diagnostic, even at long distances.

As we get further out the boat starts attracting Storm-petrels. Named after St. Peter, these birds really do at times look like they're walking on water. Here's a small group of feeding Wilson's Storm-petrels - the commonest Storm-petrel of the day… 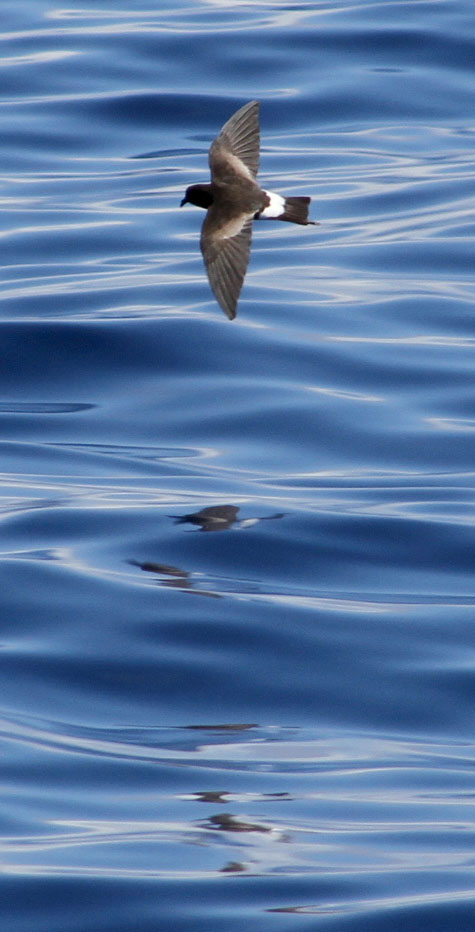 Wilson's Storm-petrels. Notice the short wings and distinctive pale upperwing stripe. These birds have long legs, which extend beyond the tail in flight. At close range, the yellow in the webbing can often be seen.

Wilson's Storm-petrels have a distinctive flight pattern - a fluttering reminiscent of swallows. It's very different from the Leach's Storm-petrel, which soon start appearing. Leach's are much more erratic in their flights, with strong, measured wingbeats and random turns like Nighthawks. As more birds come in, attracted by the chum that Kate is putting out, a third species,  the Band-rumped Storm-petrel, joins the crowd. The longer wings and large size are like the Leach's but it flies more like a Black-capped Petrel (which luckily I've now had time to study!), alternately flapping and gliding, flapping and gliding. 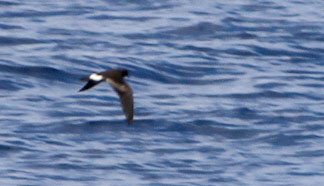 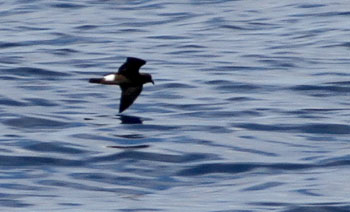 Band-rumped Storm-petrel. Much longer, and darker wings. The white on the rump forms a band which barely wraps around the underside (as in Wilson's.) The legs are shorter, and do not extend beyond the square tail.

Brian is surprised at the number of Storm-petrels, and for Leach's this is about as good as it gets on these trips.

It's hot. Very hot with little wind, and bright, reflected sun-light. Despite the factor 7,000 lotion I'm lathered in, I can feel the sun slowly starting to roast me. The lack of sleep from the uncomfortable night in the car hotel is starting to catch up on me. I take refuge and a nap inside the cabin.

As we slowly make our way through the gulf stream we encounter shearwaters, lazily gliding and flapping around the boat. As well as the more numerous Cory's, we find small numbers of Great Shearwater… 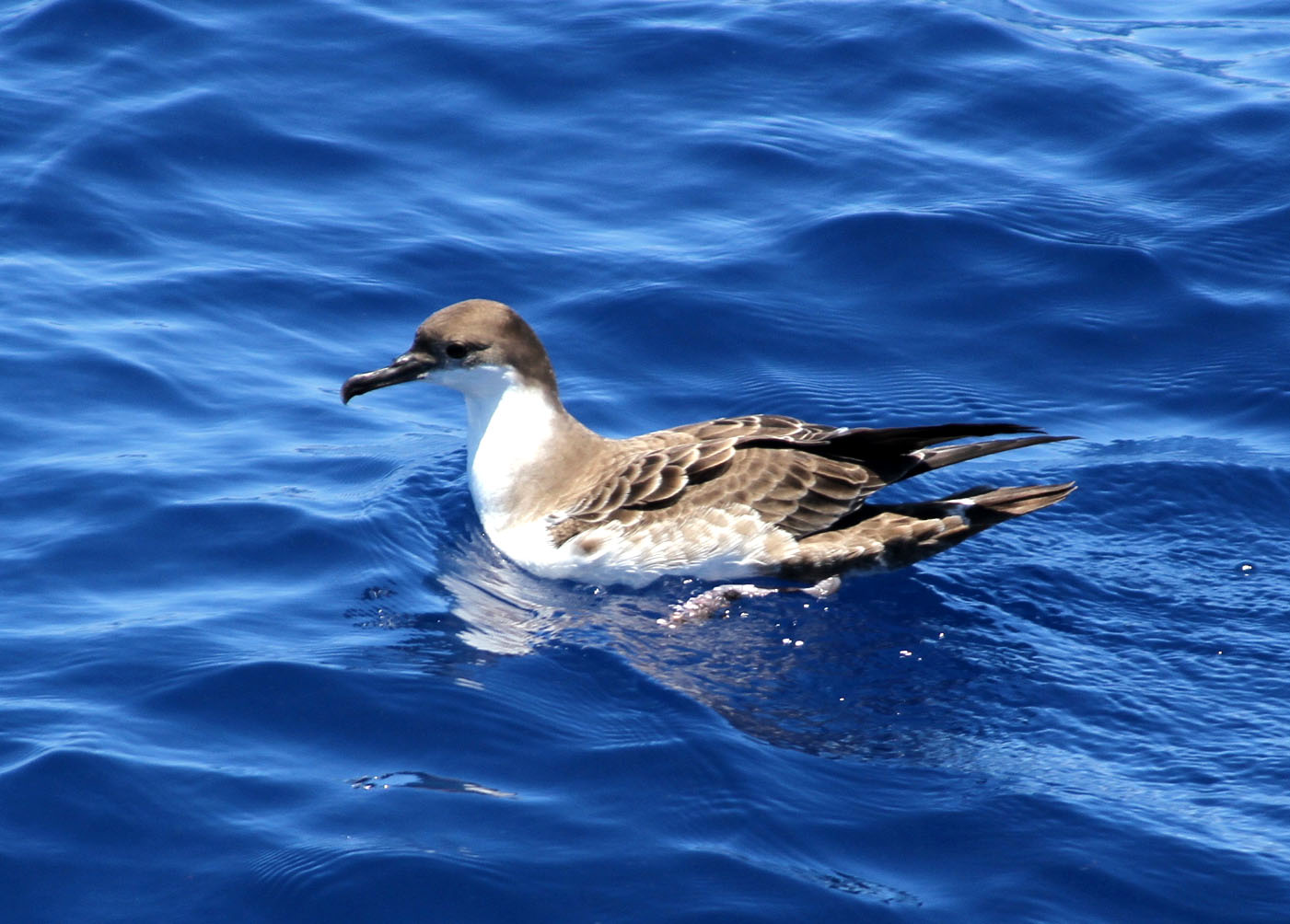 and a few Audubon's…

Although we don't get an id on a distant fly-by Jaeger, it does lead us to a large flock of Cory's Shearwaters. And more excitedly, a flock that's being harassed by a Skua... 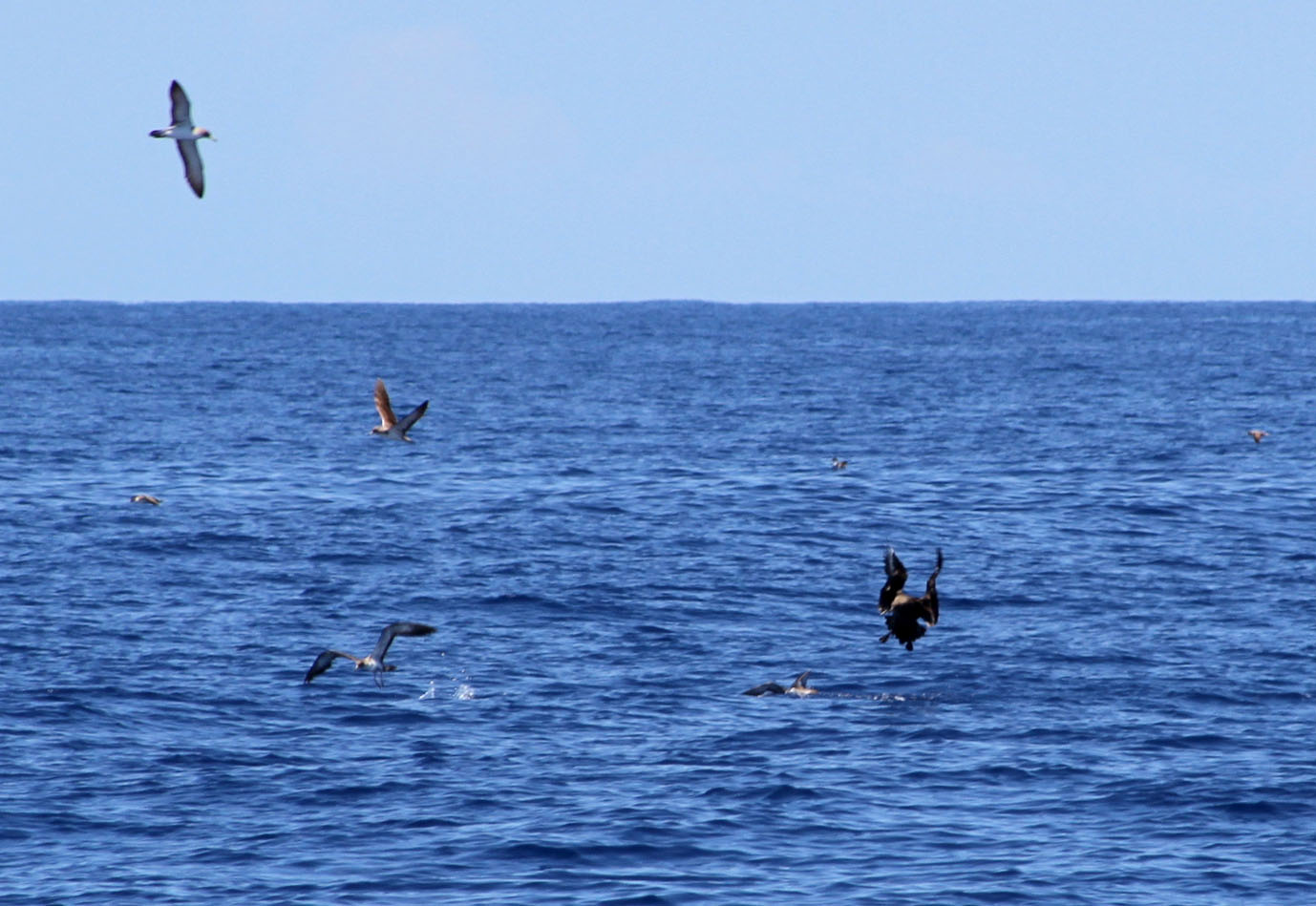 Skua on right diving at shearwaters.

It's a South Polar Skua. These heavy-set birds with flashes of white in the wing make their living by chasing other birds to give up their food. Based on how plump they look, it's a strategy that seems to work! 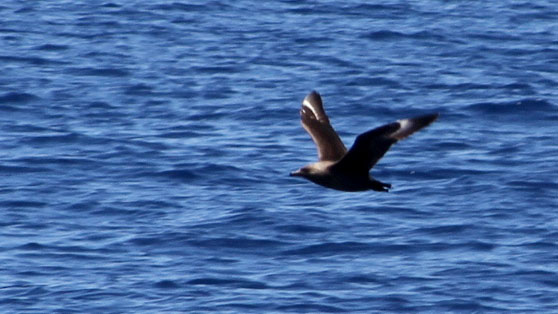 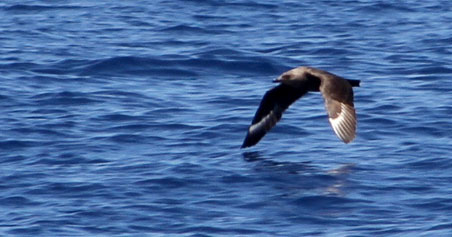 South Polar Skua - a summer visitor to these waters.

As we head back, I keep waiting for the loud-speaker to erupt with Brian yelling out, "White-tailed Tropicbird!", "Fea's Petrel!", "Herald Petrel!" - or any of the birds I missed by not being here for the spring. But it stays silent. Although no rarities, we had some great views of some amazing birds. Pelagic birding is so much fun - the excitement of never knowing what's going to appear on the horizon next, together with an opportunity for studying birds that you never get to see on dry land.

Thanks Brian and Kate for a great trip!

By 5:30, I was on the road again, driving to Philly to pick up my repaired car and then to Boston. It's a long and boring trip, punctuated only by seeing the Wright Brother's memorial to the first flight at Kitty Hawk, and a few hours of sleep in the car in Delaware. Looking forward to a shower, a bed, and a decent cup of coffee.