BIG YEAR BIRDERS ON A BOAT

"Are you Neil Hayward? You're late!"

I so wanted to make a good first impression with Debi Shearwater. Getting lost on the way to the boat looking for coffee resulted in the lateness. Not having the right cash for the trip resulted in an extra reason for Debi to be unimpressed.

Debi Shearwater has been running pelagic trips out of California for over 30 years. She's an expert on seabirds, whales, oceanic life. Oh, and North American birders! If you're one of the latter, chances are you've been on a Shearwater Journeys boat with Debi.

After the safety talk (no smoking, standing on the benches, bow-hogging or generally being a pain in the ass) we set off.

Half Moon Bay is a quick 30 min from SFO airport - where I'd flown in late last night. After navigating the coastal fog I finally rolled into town around 2am. Since I'd be getting up in 4 hours I decided to stay at Hotel Toyota. They charge pretty much the same as Hotel Mazda, but the "bed" is slightly more comfortable. What was not more comfortable was the harbor fog-horn that went off every 15 seconds. I never quite found a way to turn that feature off...

The shorebirds on the jetty were a lot more awake than I was... 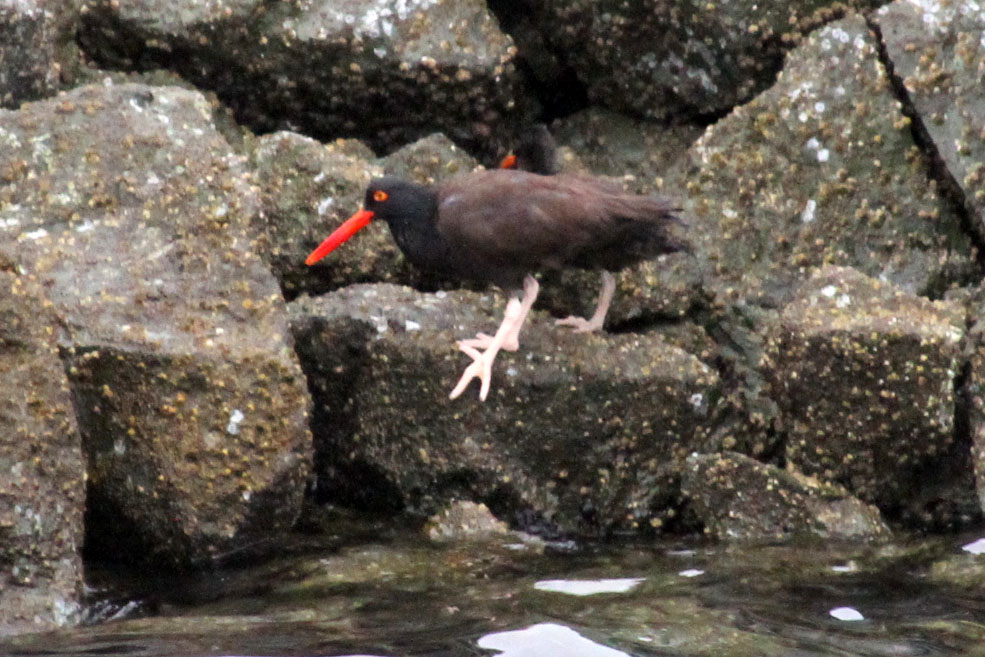 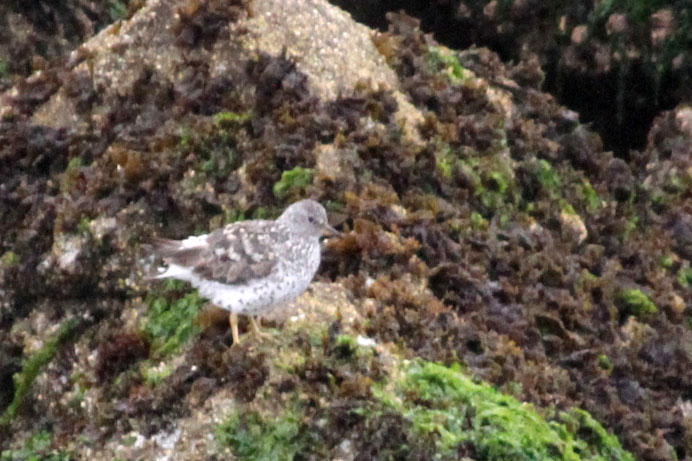 As we left the harbor for the open ocean we had quick views of Marbled Murrelets and a young, totally dark Rhinoceros Auklet... 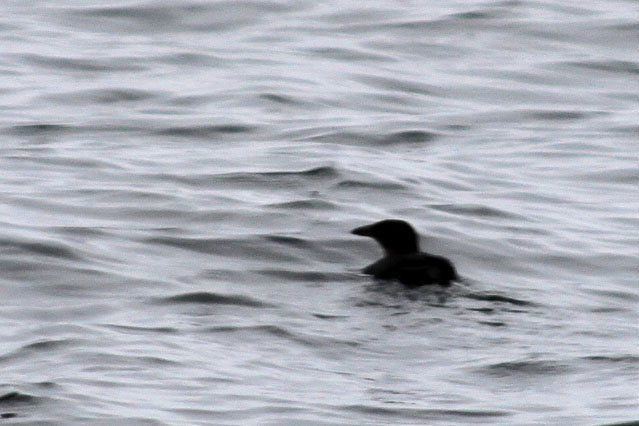 Not the Loch Ness Monster - but Rhinoceros Auklet

Inside the boat, the sightings were equally interesting. Firstly, my birding friend from MA - Dave Hursh - was on board, which made for a nice surprise. And as I'm talking to Dave, I realize the guy next to us is Jay Lehman - the other guy who's doing a full-blown 2013 Big Year (check out Jay's blog here.) I wondered when we'd finally meet. And, as with Hans de Grys (mid-year to mid-year Big Year birder extraordinaire) my arch-nemesis turned out to be a really nice guy! It was great comparing notes on places we'd birded, or not yet birded, quizzing each other on strategies, and giving suggestions. But really, there's something nice about talking to someone who knows exactly what you're going through - the travel schedule, decision-making, the thrill of seeing new birds, bird identification, blogging, being away from home, general sleep-deprivation...

While I'm talking to Jay and Dave, my first new year bird whizzes by - the first of many Ashy Storm-petrels... 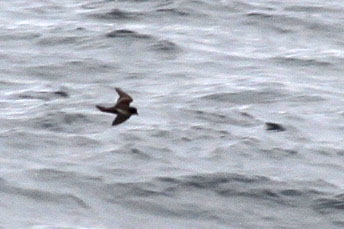 ...and then a Fork-tailed Storm-petrel, an unexpected find for the trip.

And it's not long before the first albatross spots us and heads over to inspect... 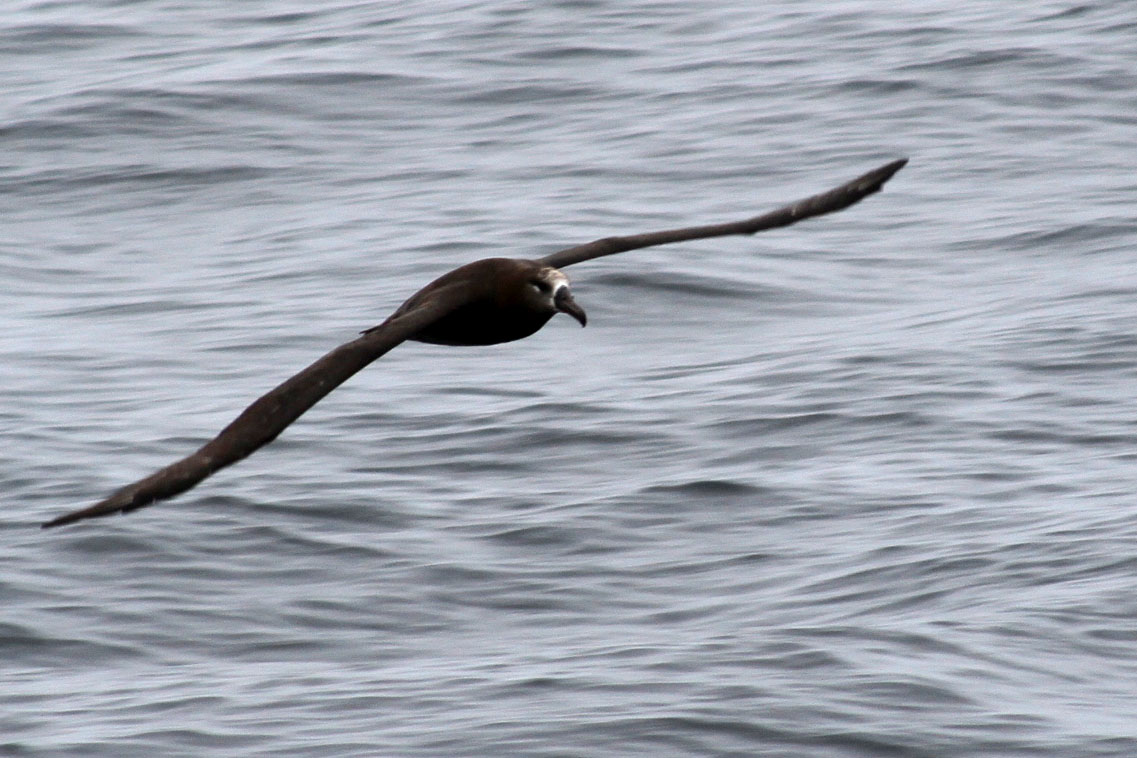 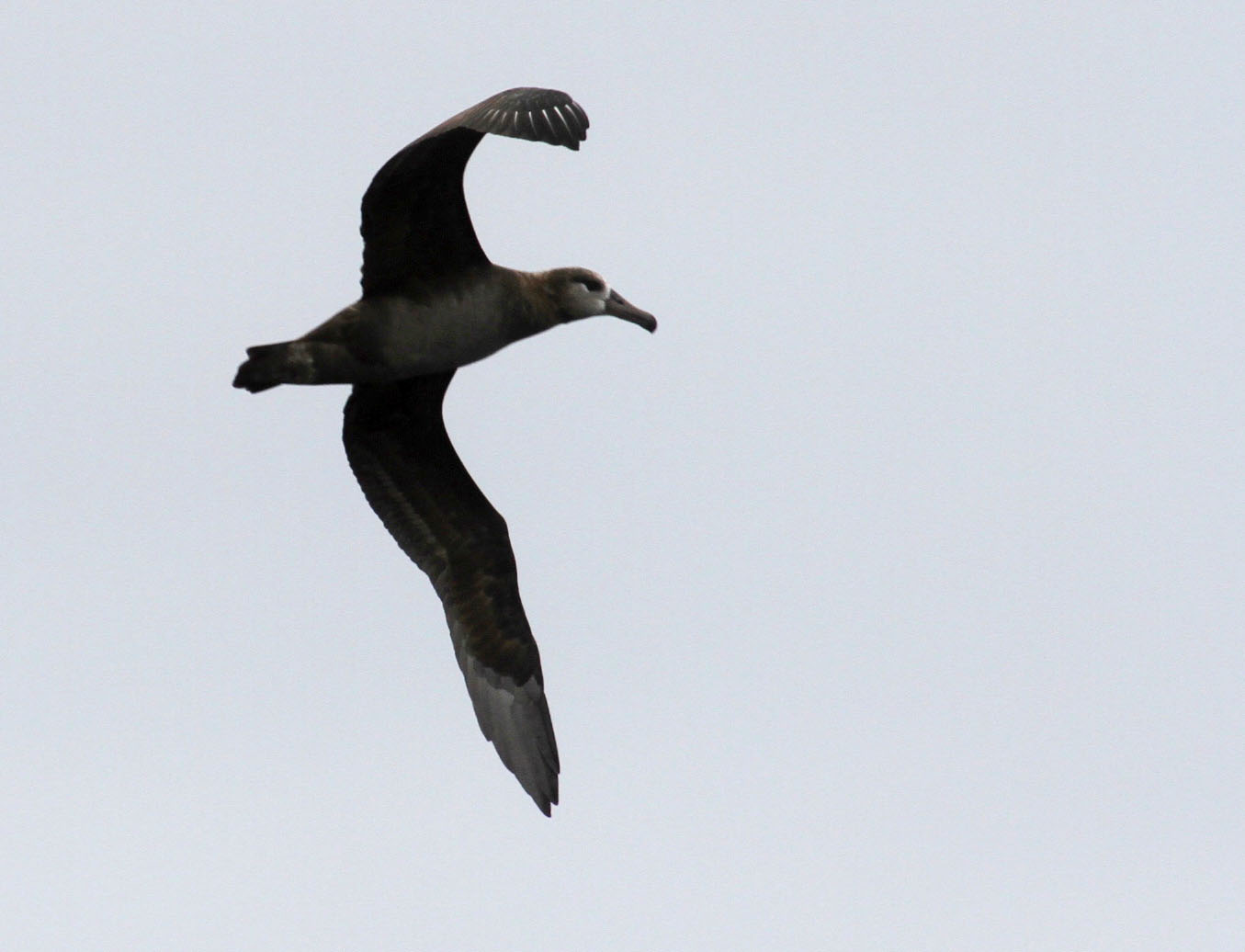 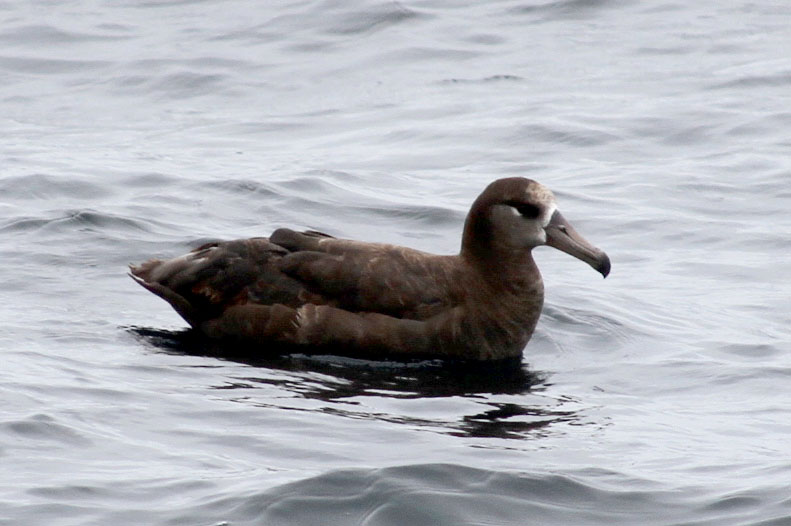 Black-footed Albatrosses have a wingspan of  just over 7 feet.
Almost the entire population breeds on Hawaiian islands.


"You know who that is over there?" Jay's pointing to a guy on the other side of the boat. No - I'm pretty sure I've never met him before. But there is something vaguely familiar about him. "Sandy Komito." Wait, *the* Sandy Komito? 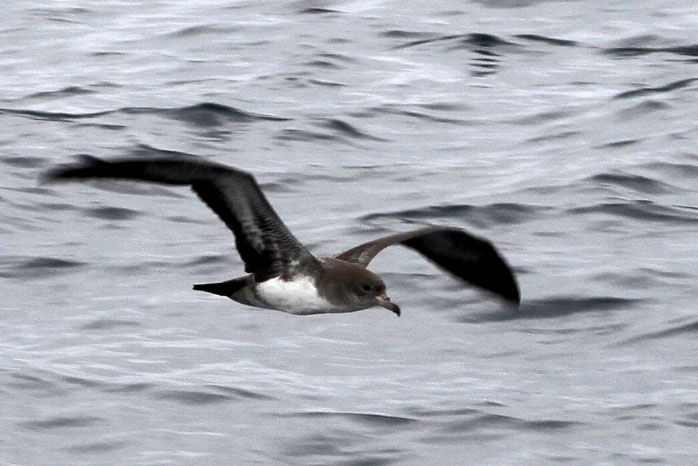 I spent a wonderful hour or so chatting to Sandy. He's a great and hilarious story-teller, as well as a humble birder. I learned that the key to a successful big year is to "chase the rarities." I'd kind of known this. But it's hard to do that when there's so much common stuff to see! "You can always go back for the common stuff. If you're in the middle of a Minnesota trip that you've spent ages planning, and a rarity turns up in Texas, you go to Texas." I knew he was right, absolutely right, and if I could do this year again, that's probably what I'd do. Well, I still had 5 months left... 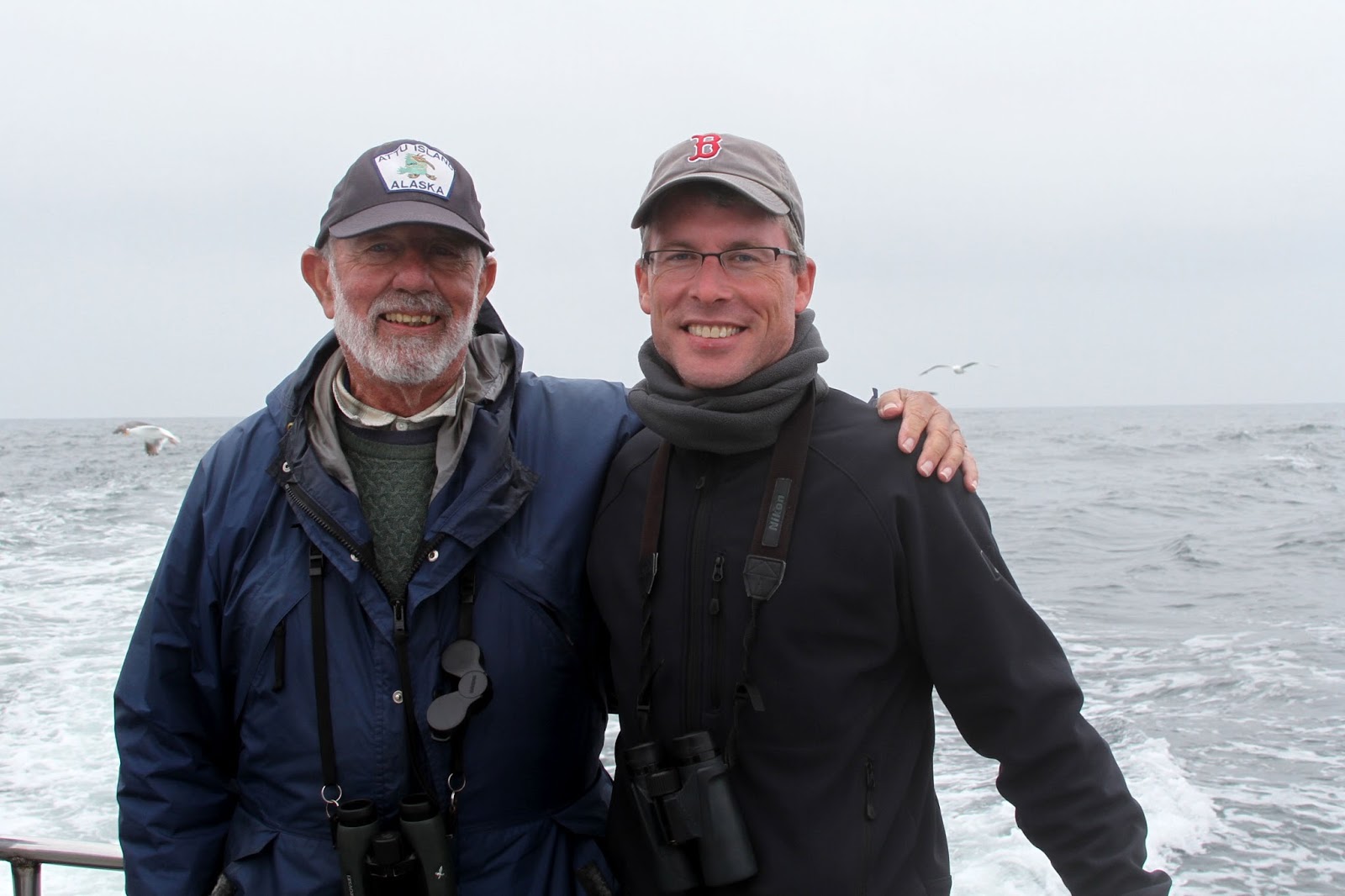 An unexpected highlight to the trip - chatting with Sandy Komito.

Sandy's not a huge fan of the book and film, "The Big Year" ostensibly about him and his 1998 Big Year attempt. He explains that parts of it are fictional - especially the invented "competition" between Sandy, Al Levantin and Greg Miller. Birders are competitive  - but only with themselves and will go out of their way to help a fellow birder find birds - which I've certainly experienced this year. The one part of the book that is true though, is that Sandy loves birds. You can see the light shine in his eyes as he talks about them and as he watches them. He's a man with a great passion.

I'm enjoying talking to Sandy and Jay so much, that I barely have time to also enjoy the great seabird show... 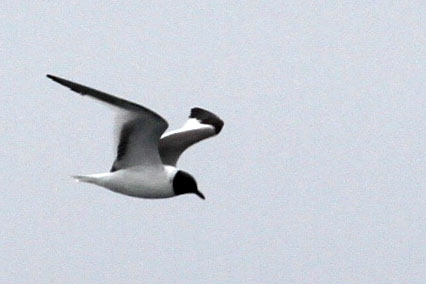 Sabine's Gull - such a simple coloration makes for one of the most beautiful of birds. 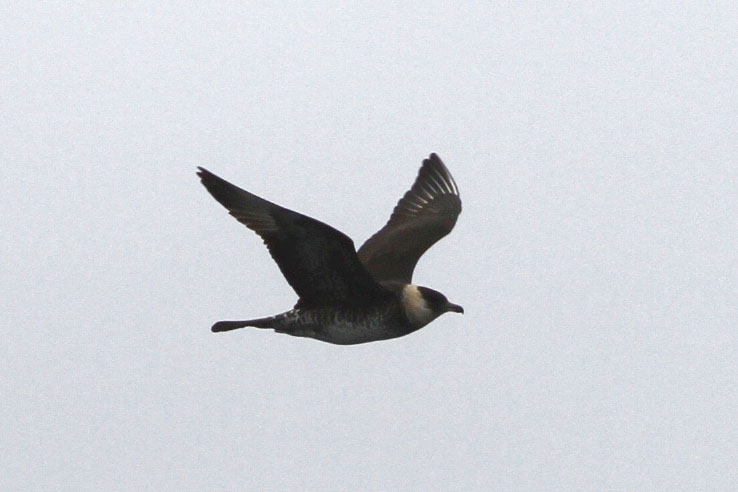 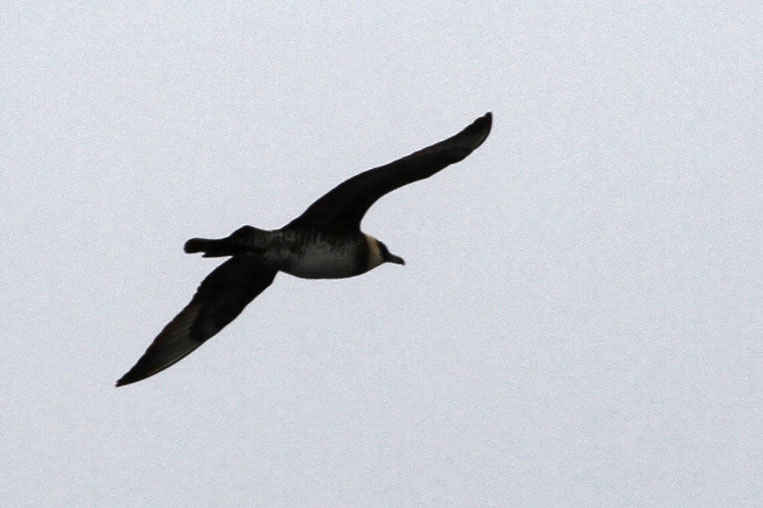 Meanwhile, there's action back on the boat... 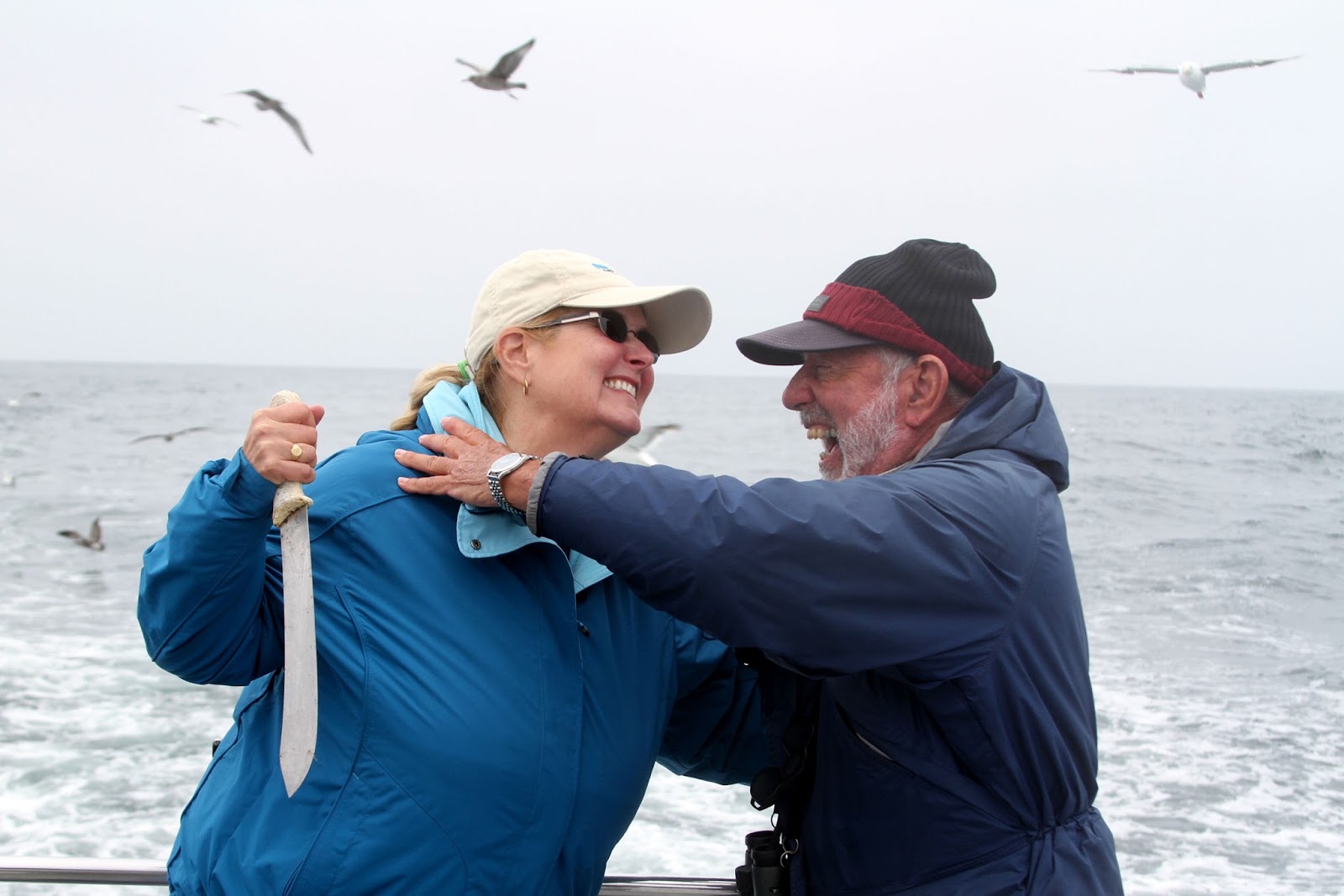 Debi Shearwater and Sandy Komito.
"No, we're not stopping for another whale"


I think they're joking!

It's getting late so we start heading back to shore. Suddenly Debi screams out, "Laysan Albatross, 12 o'clock!" 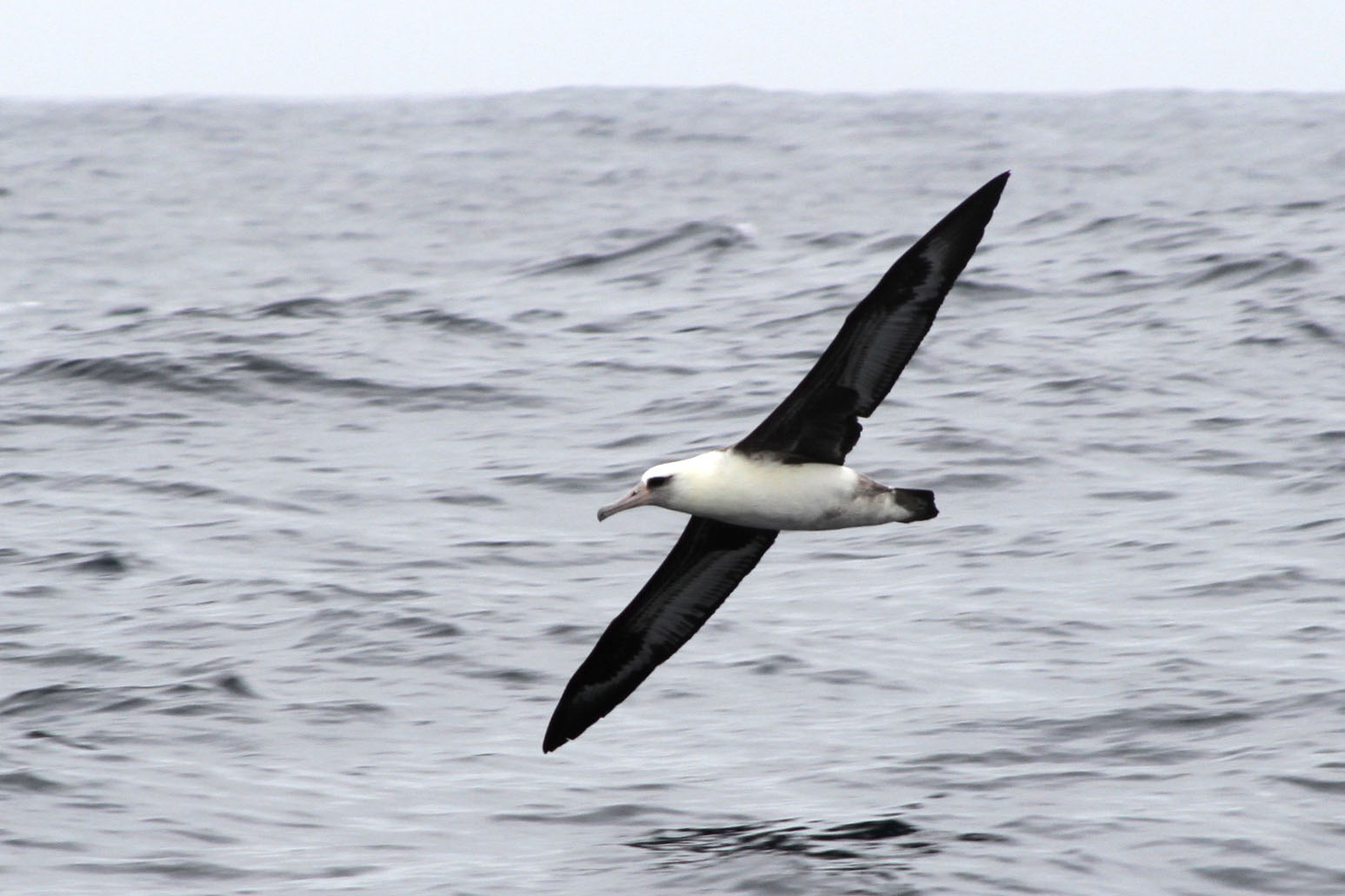 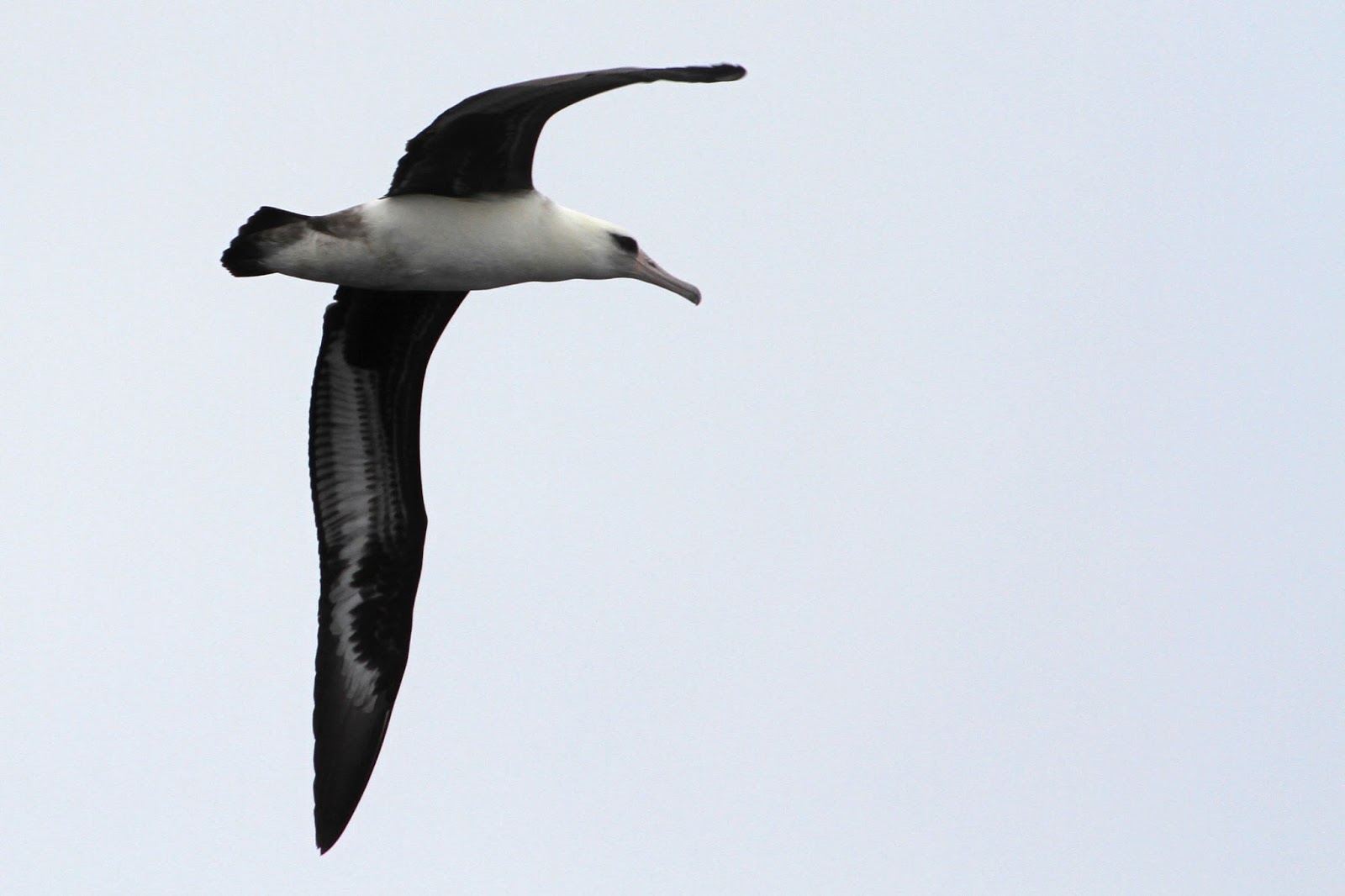 Laysan Albatross - named after one of the Hawaiian islands on which they breed.
Based on banding, the oldest known bird in the world - at least 62 - is a Laysan Albatross named, "Wisdom." 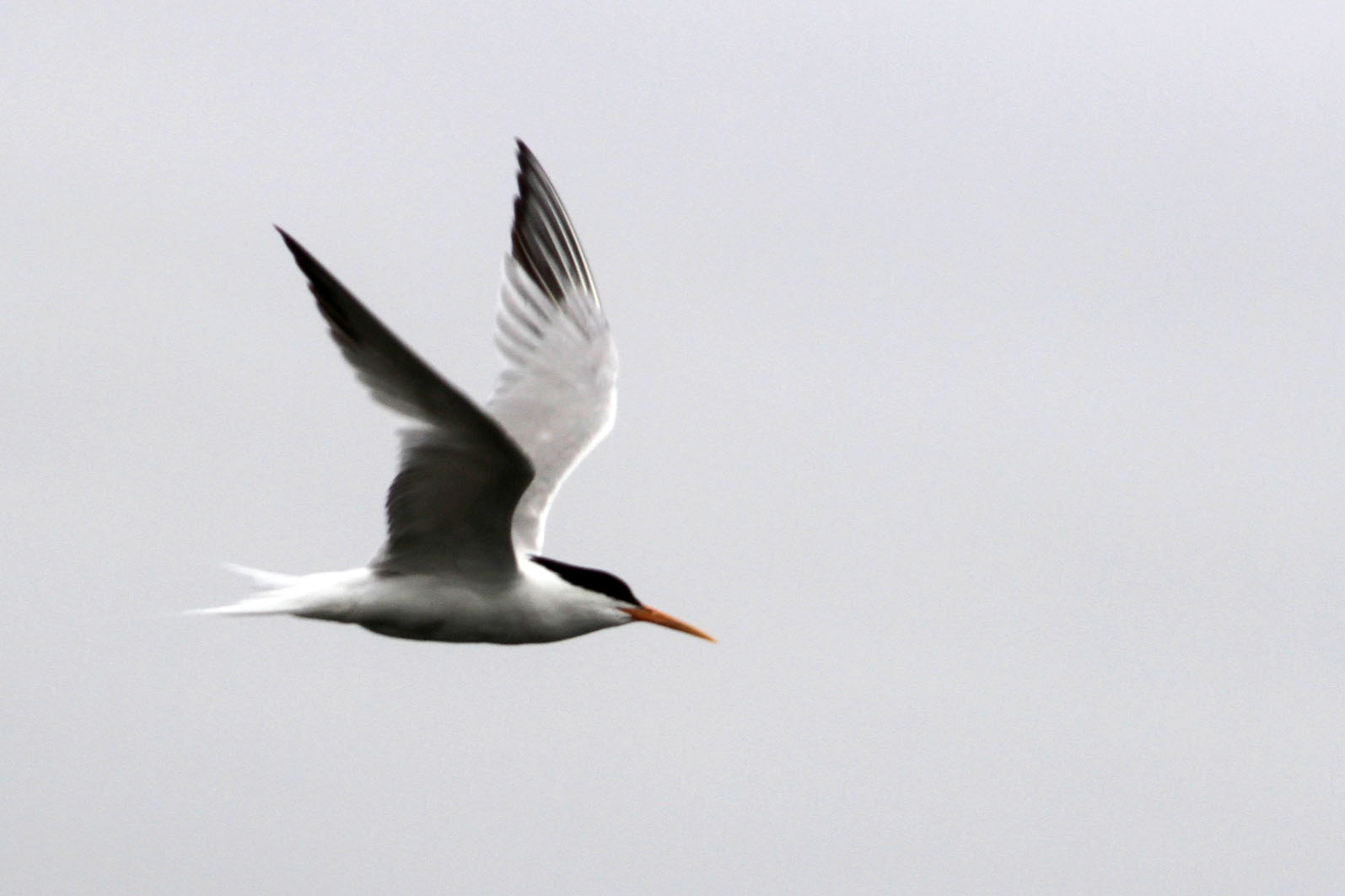 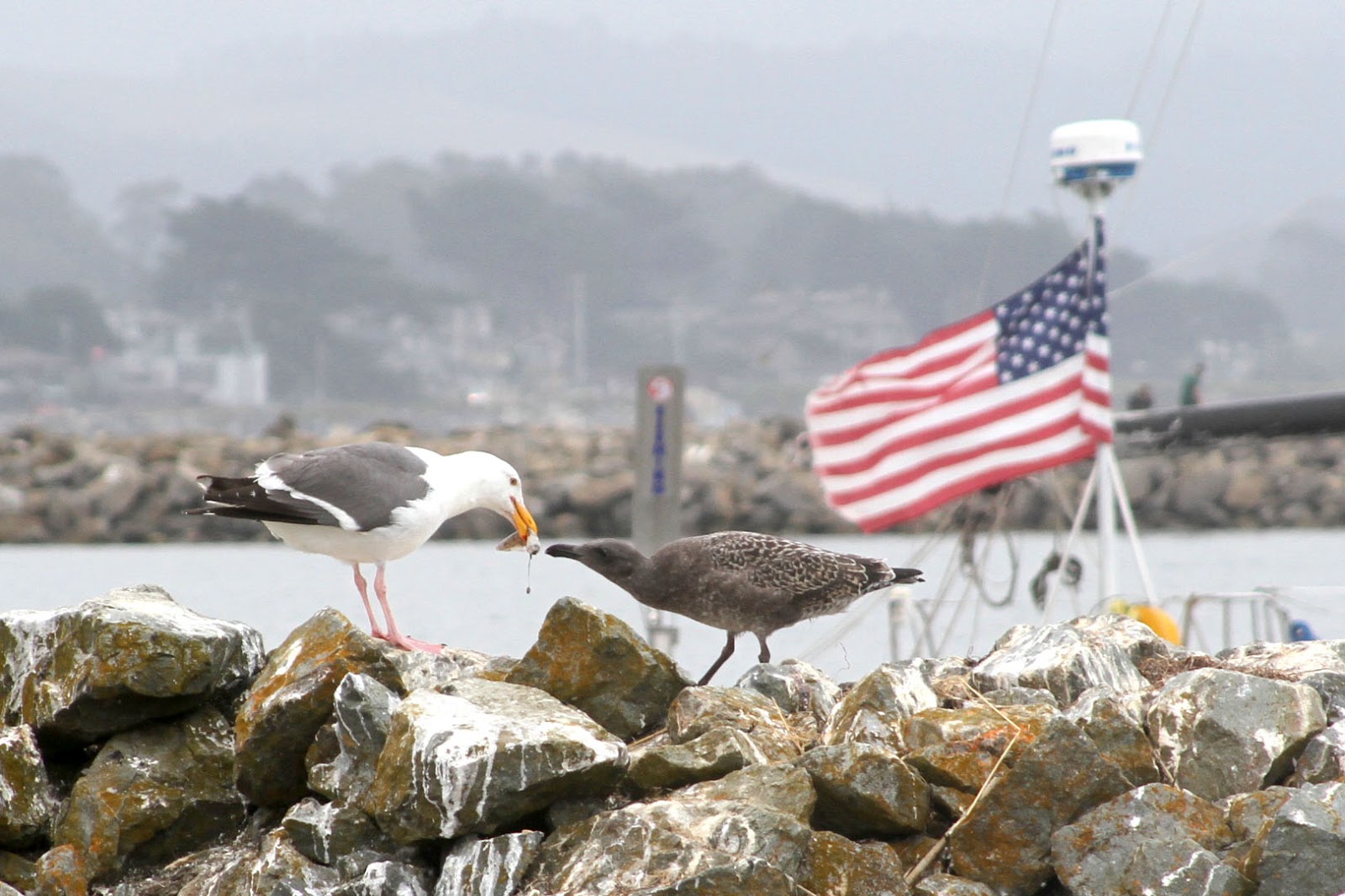 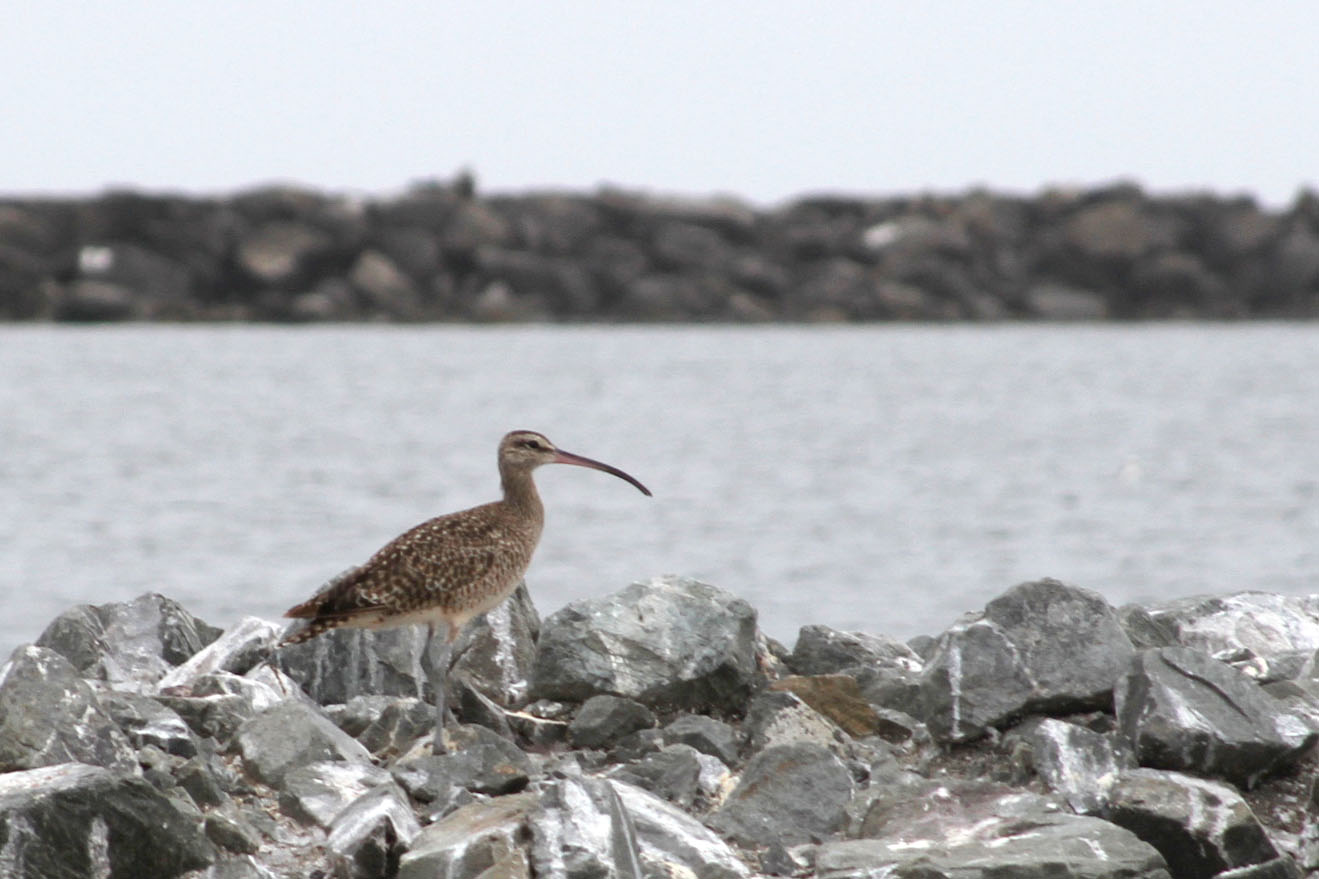 Whimbrel on the jetty

I saw some great birds and had a wonderful day chatting with Debi, Sandy and Jay. 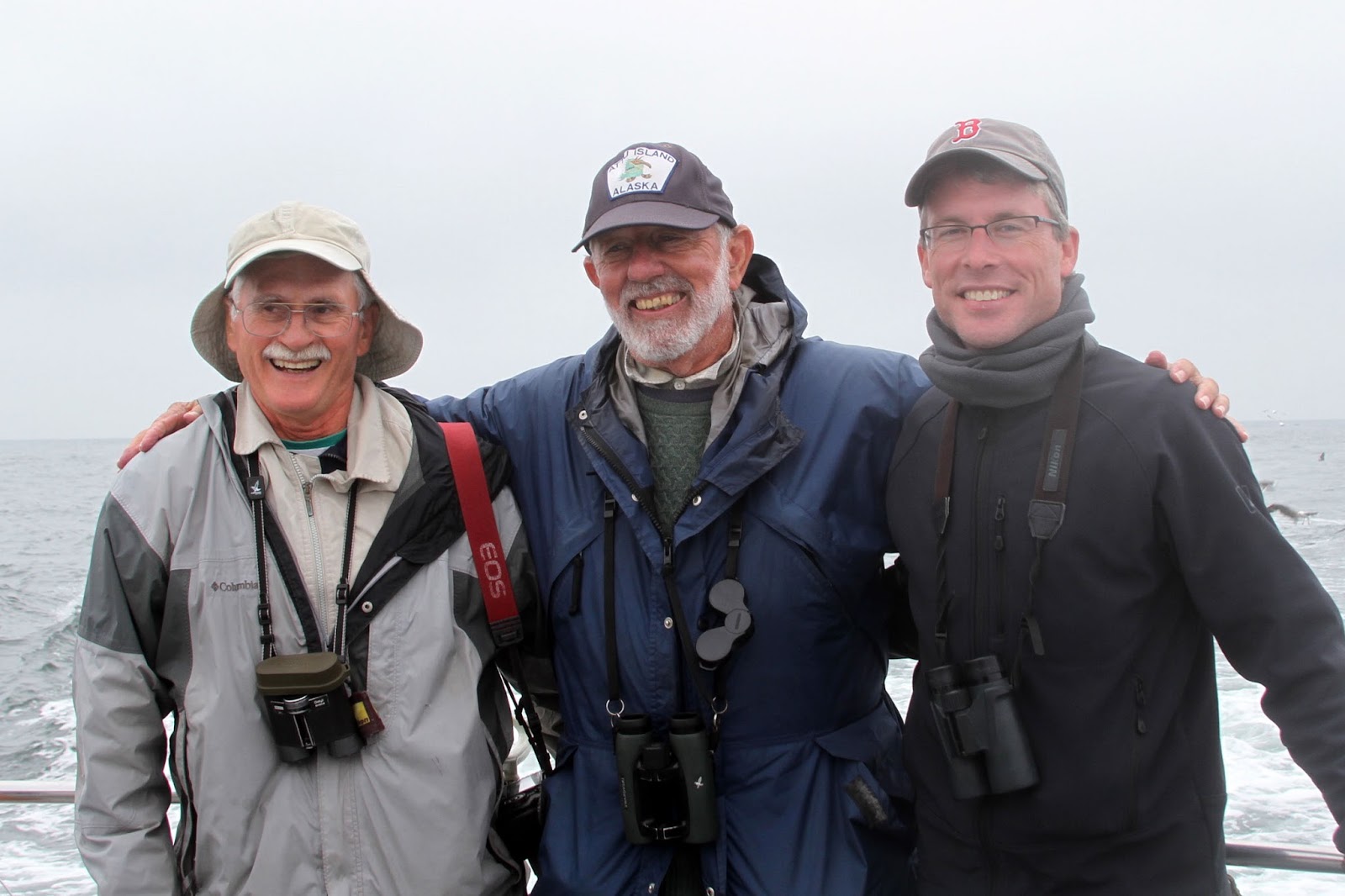