I'm pulled abruptly from my sleep by knocking on the window. The window belongs to a new rental car, and the afore-mentioned boat to a new ocean. I've swapped the Pacific for the Atlantic, and California for Florida. It's 2:30 am and I can't remember the last time I had a good night's sleep. Nor even the last time I slept in my own bed! I've spent more time sleeping in rental cars this past month than I have back home.

I'm parked in New Smyrna a resort town a few miles north of Cape Canaveral. After major storm delays and too many hours sitting in Atlanta airport (*any* hours spent there are too many), I touched down in Orlando and arrive at the boat with only 2 hours to "sleep" before our departure. Today is an all day pelagic (3am - 9pm) into the gulf stream waters off the Florida coast. It's billed as a Tropicbird Pelagic - which is why I'm here. 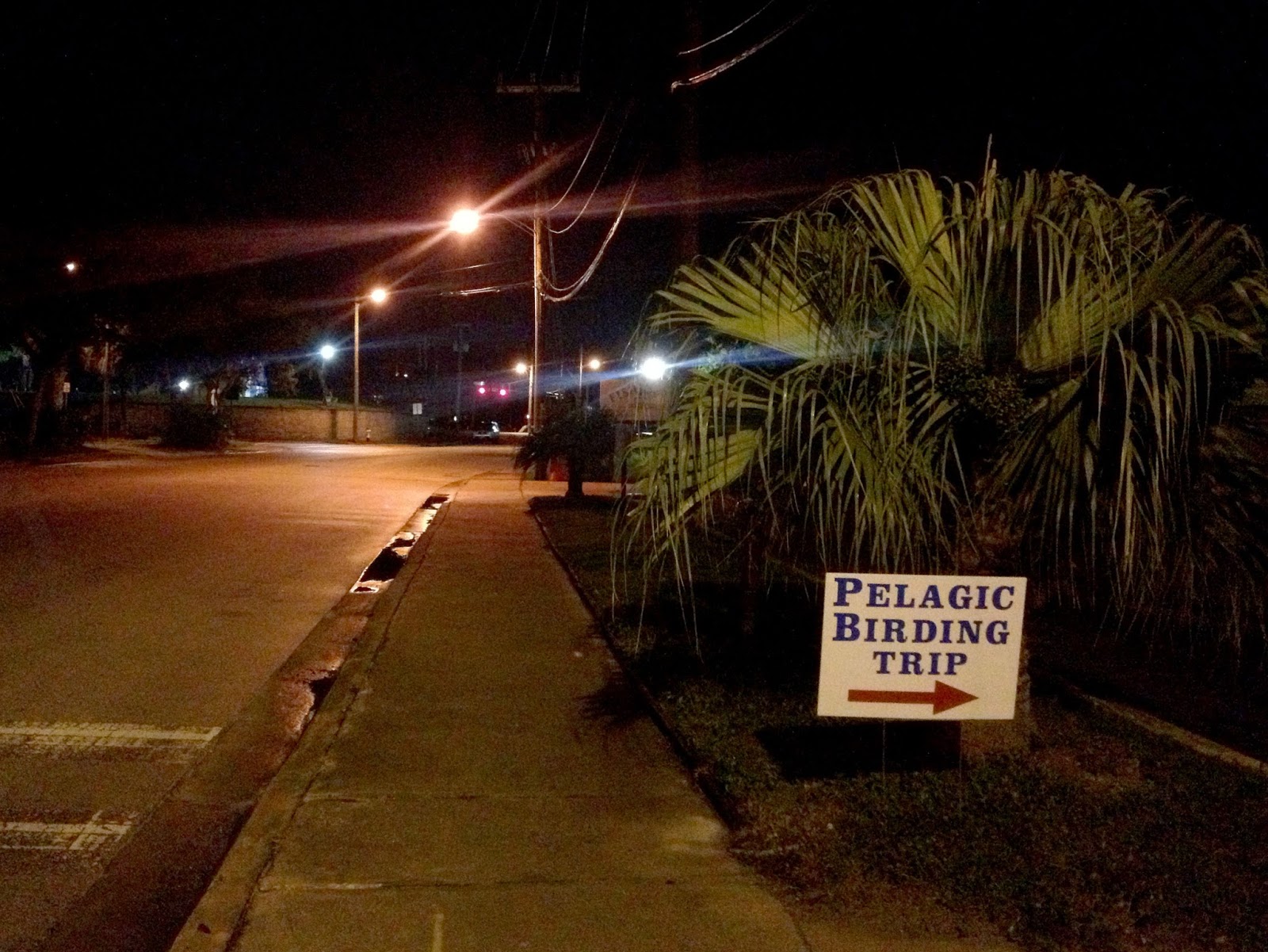 The trip is run by the Marine Center and is led by the friendly and knowledgeable Michael Brothers... 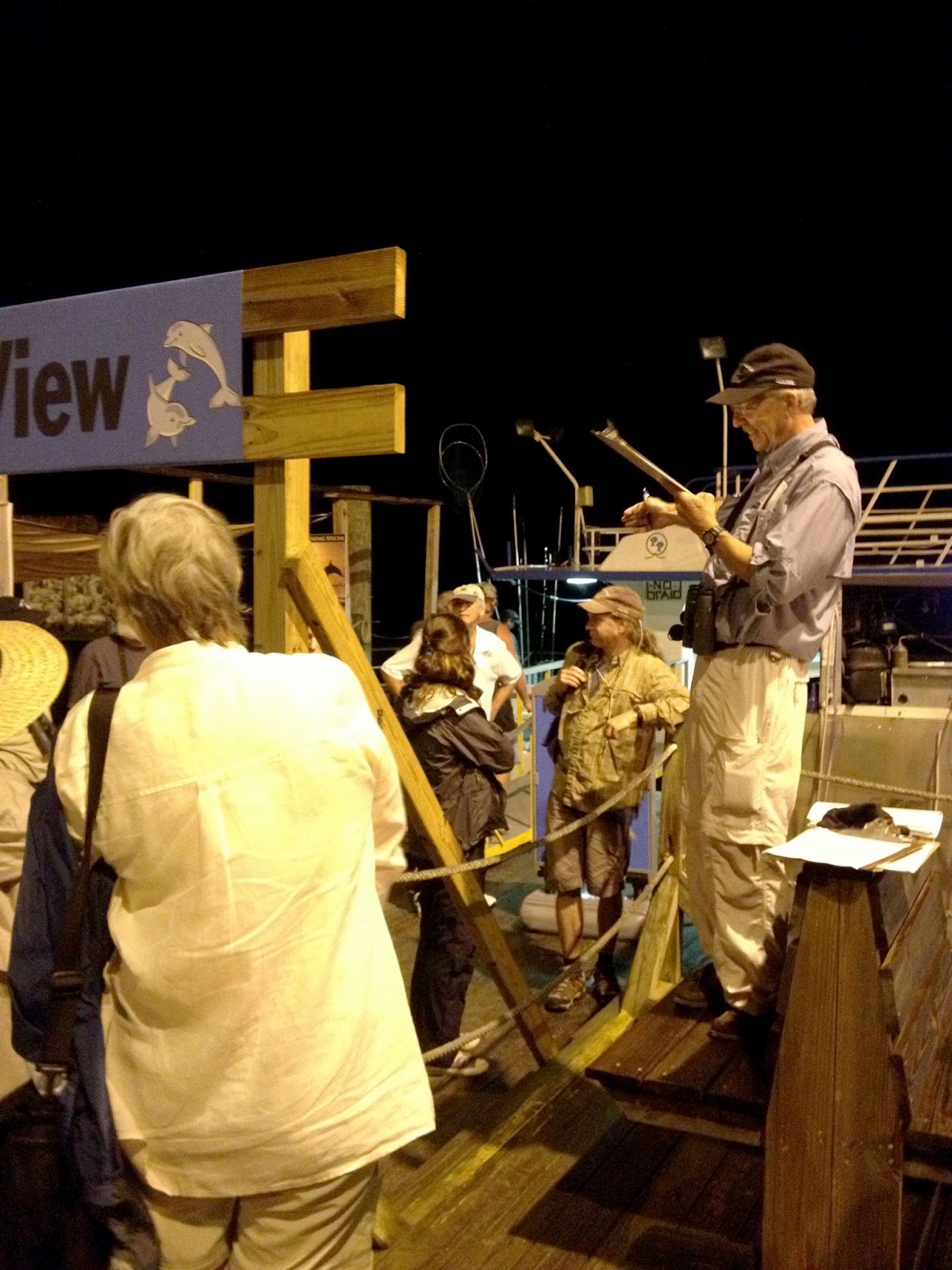 Pre-trip safety talk: emergency exits are located on all sides of the boat.

It's a beautiful calm morning as we slowly pull out of port. It's a couple of hours before we reach the birdier warm waters of the gulf stream, which is why we're leaving early and in the dark. As the sun rises, we start seeing our first birds… 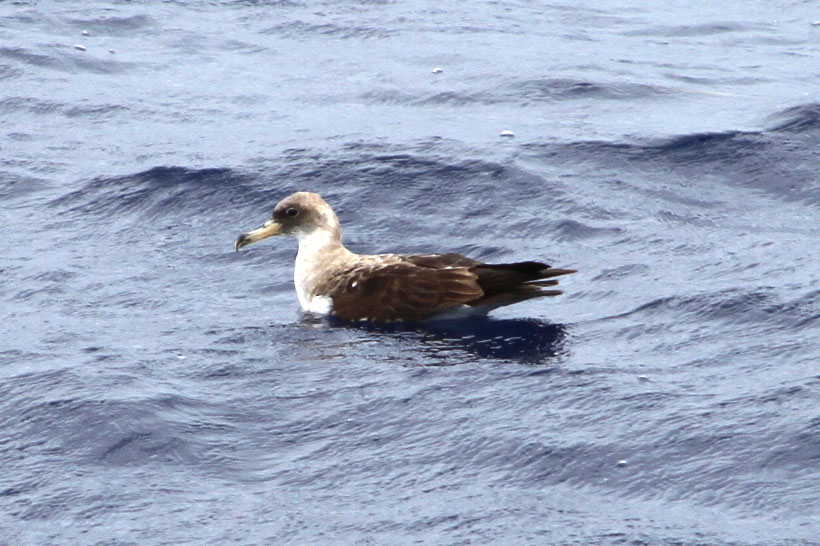 Cory's Shearwater resting on the water. The first of many today. 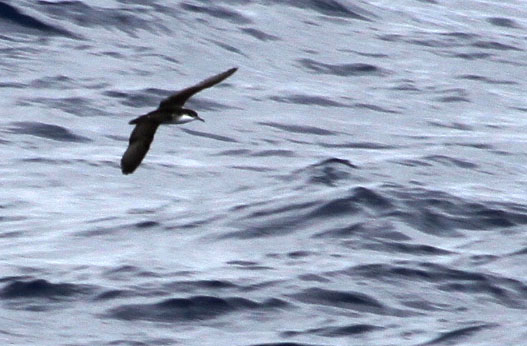 As we get further out, we encounter a mixed flock of tropical terns, which allows us to compare the differences... 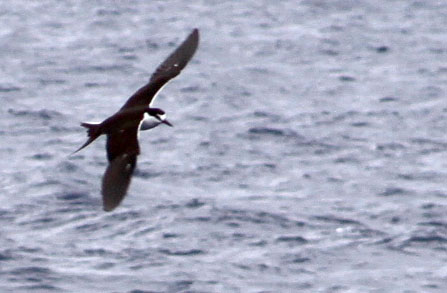 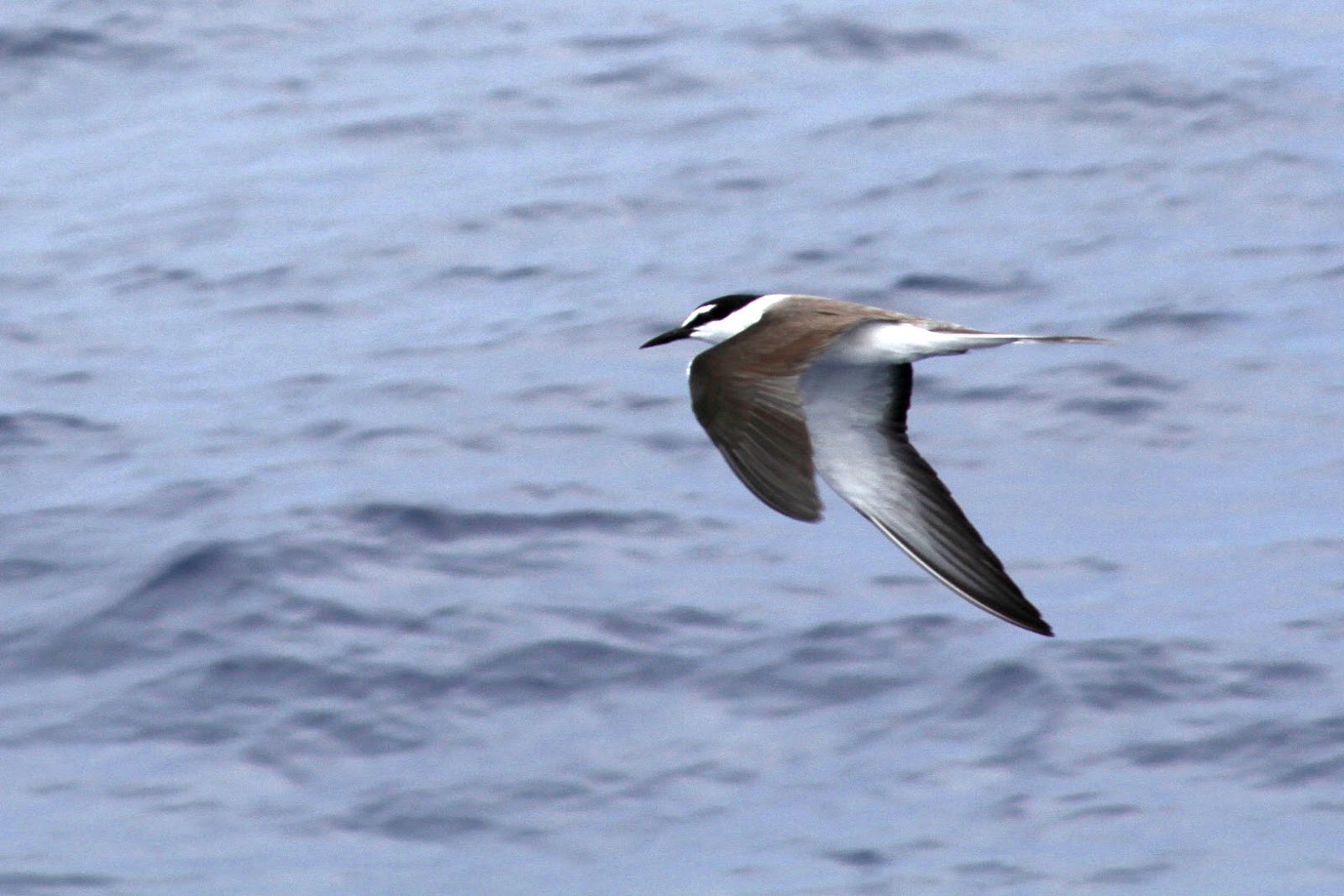 Bridled Tern. Noticeably paler upperwings than the Sooty Tern.
The white on the forehead extends behind the eye (in Sooty stops at the eye.)
More white in tail, and the white on the underwing extends much further to the tip of the primaries.

We have buckets of lovely chum… 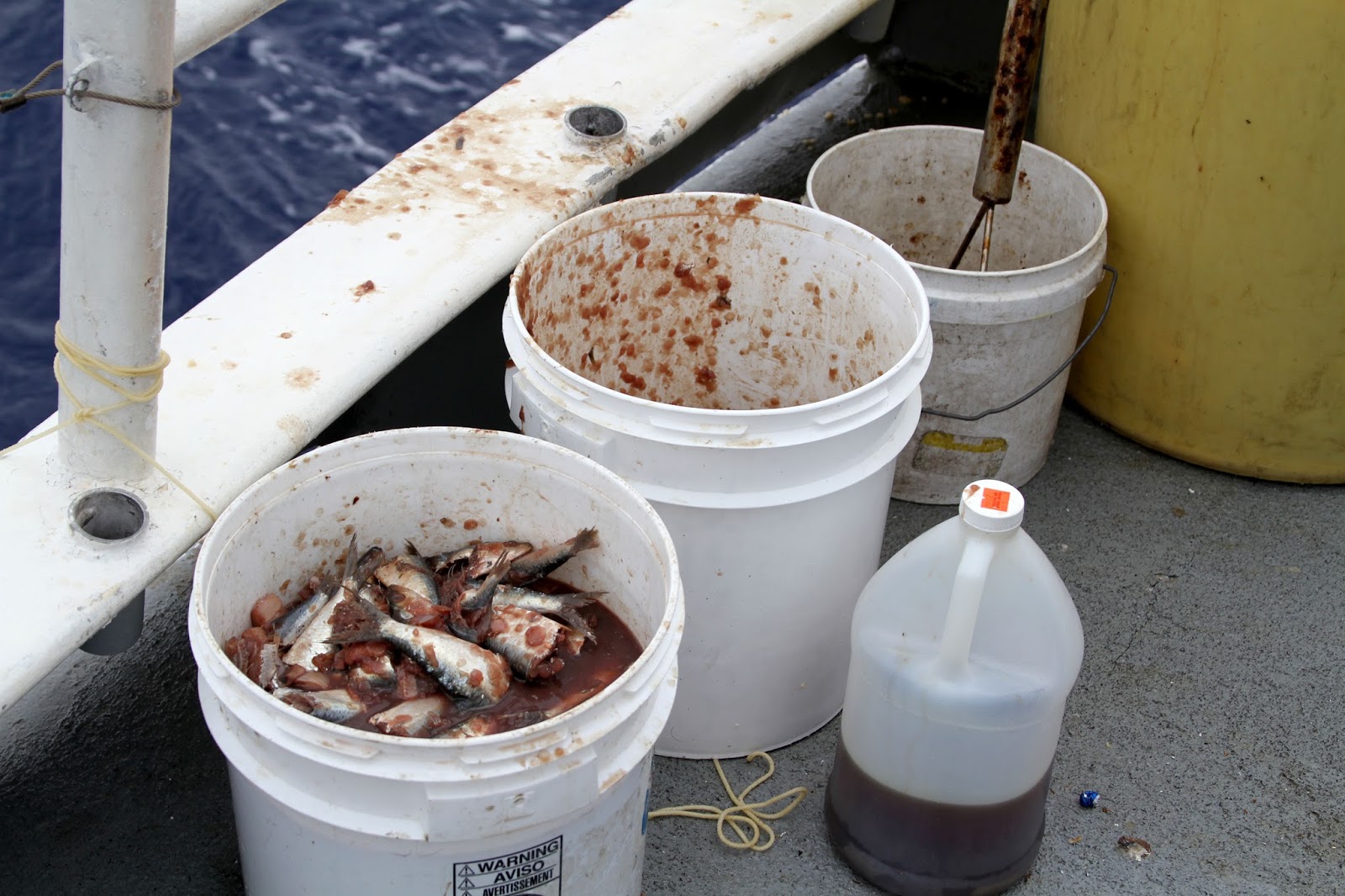 which attracts a few Storm-petrels. 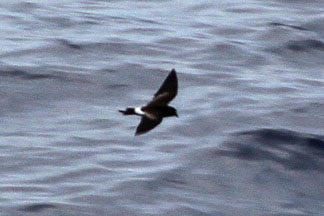 But still no Tropicbird. Hmmm.

Suddenly there's a shout from the observation deck... 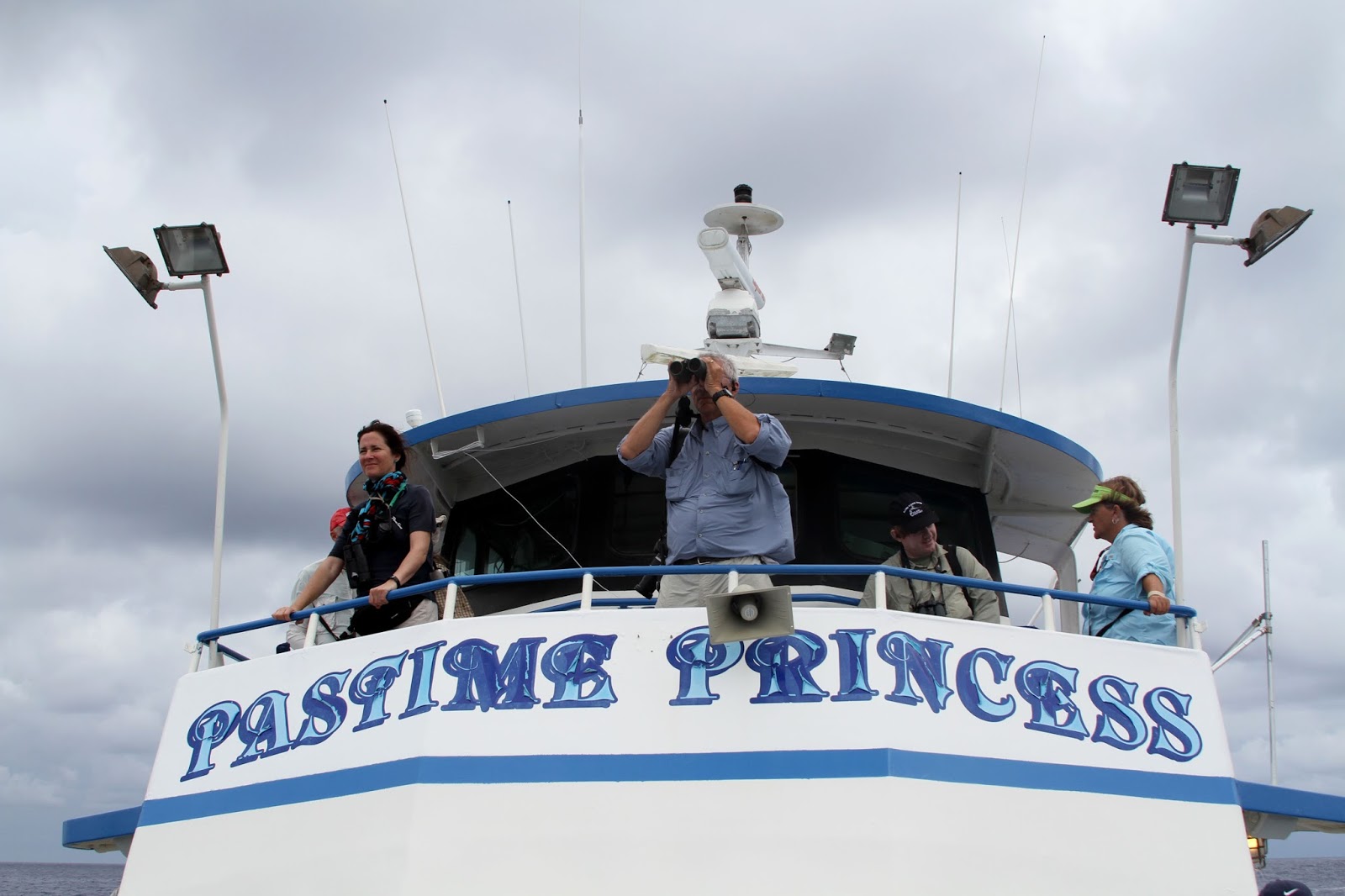 We've run into a large group of short-finned pilot whales... 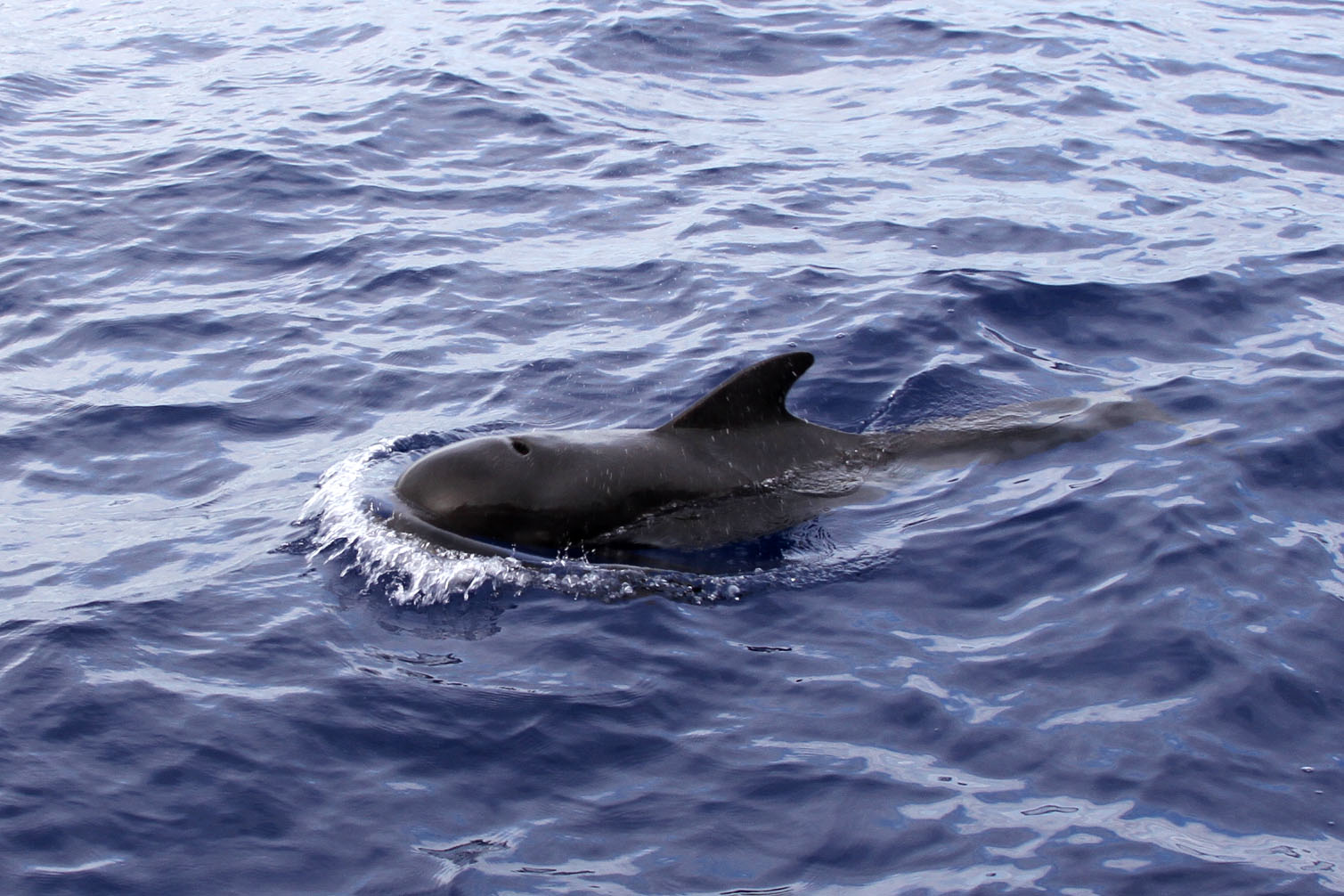 Pilot whales are the largest of the oceanic dolphins and are squid-eaters. They're a matrilineal species, with individuals staying with their mother's pod for many years. Females undergo menopause, after which they may help with raising and caring for young in the pod. We saw at least 15 animals together including some pretty young ones. We were treated to incredible views as the animals frequently surfaced next to the boat.

And then finally the call I've been waiting for all day, "Tropicbird. 3 o'clock" We all rush to the starboard side of the boat as a large white bird slowly glides toward us. I'm looking for the black carpal bars that would make this a White-tailed Tropicbird, but I can't see them. Nor the black wing-tips of either Red-billed or White-tailed. And then the correction is shouted out, "Royal Tern." False alarm. Damn.

And then a call I've never heard on a pelagic, "Balloons! 12 o'clock!" 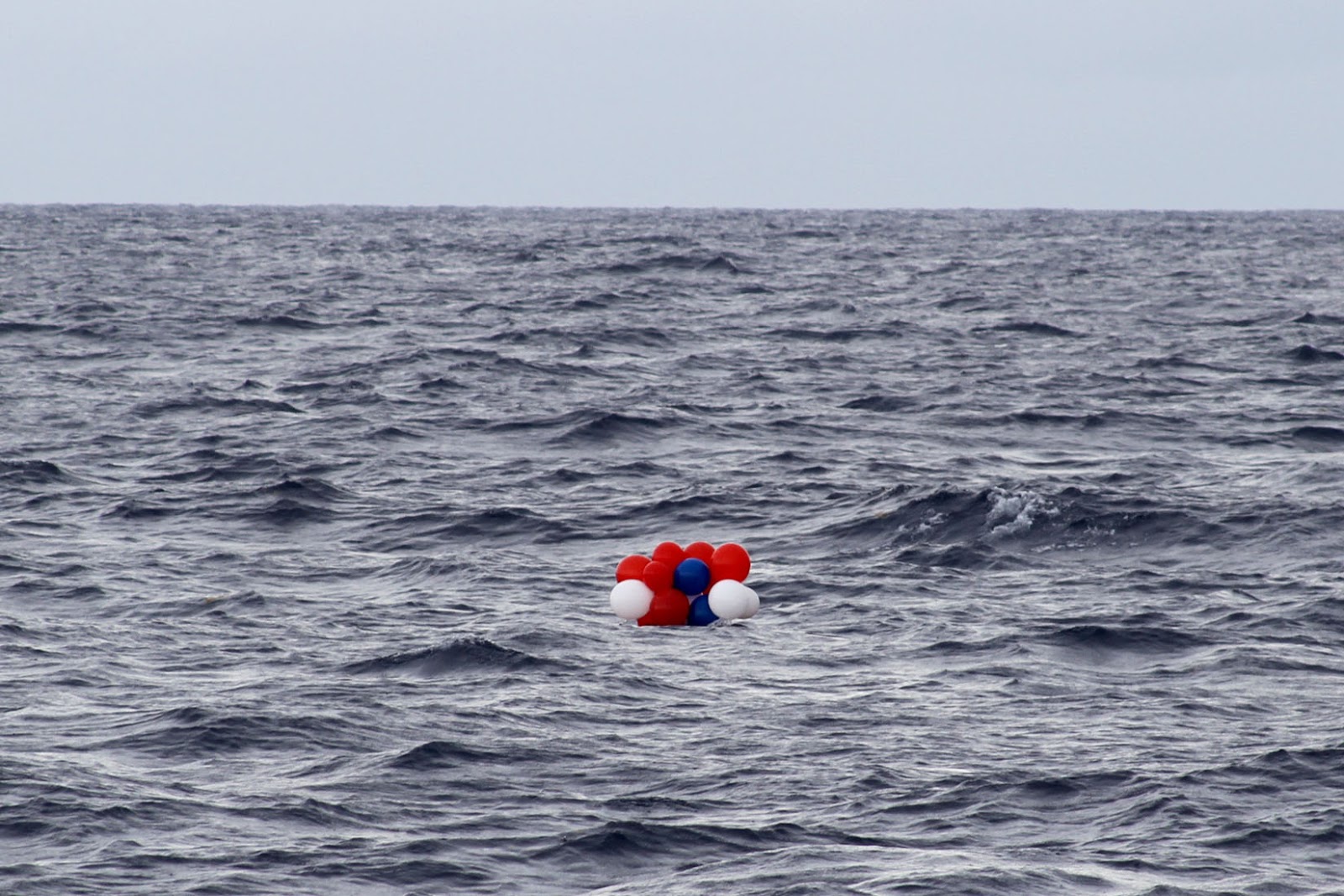 The captain gently pulls the boat alongside the brightly-colored bunch so that we can remove them. Thousands of balloons are innocently released each year - we've all witnessed them rise and drift away to the horizon. And just like these, many end up floating out at sea. Eventually they burst. What happens next is as sad as it is predictable. The deflated balloons look just like jellyfish, the favorite food of sea turtles. The latter, along with fish, dolphins and whales ingest the balloons. The animals either die quickly from choking or slowly after the balloon becomes lodged in and blocks the digestive tract.

It's late afternoon, and we're turning round, ready to head back across the gulf stream and back to port. I'm scanning the skies for tropicbird, and my ears are strained for the announcement. But it never comes.

As we head back the weather suddenly hits. The wind picks up and the fog rolls in… 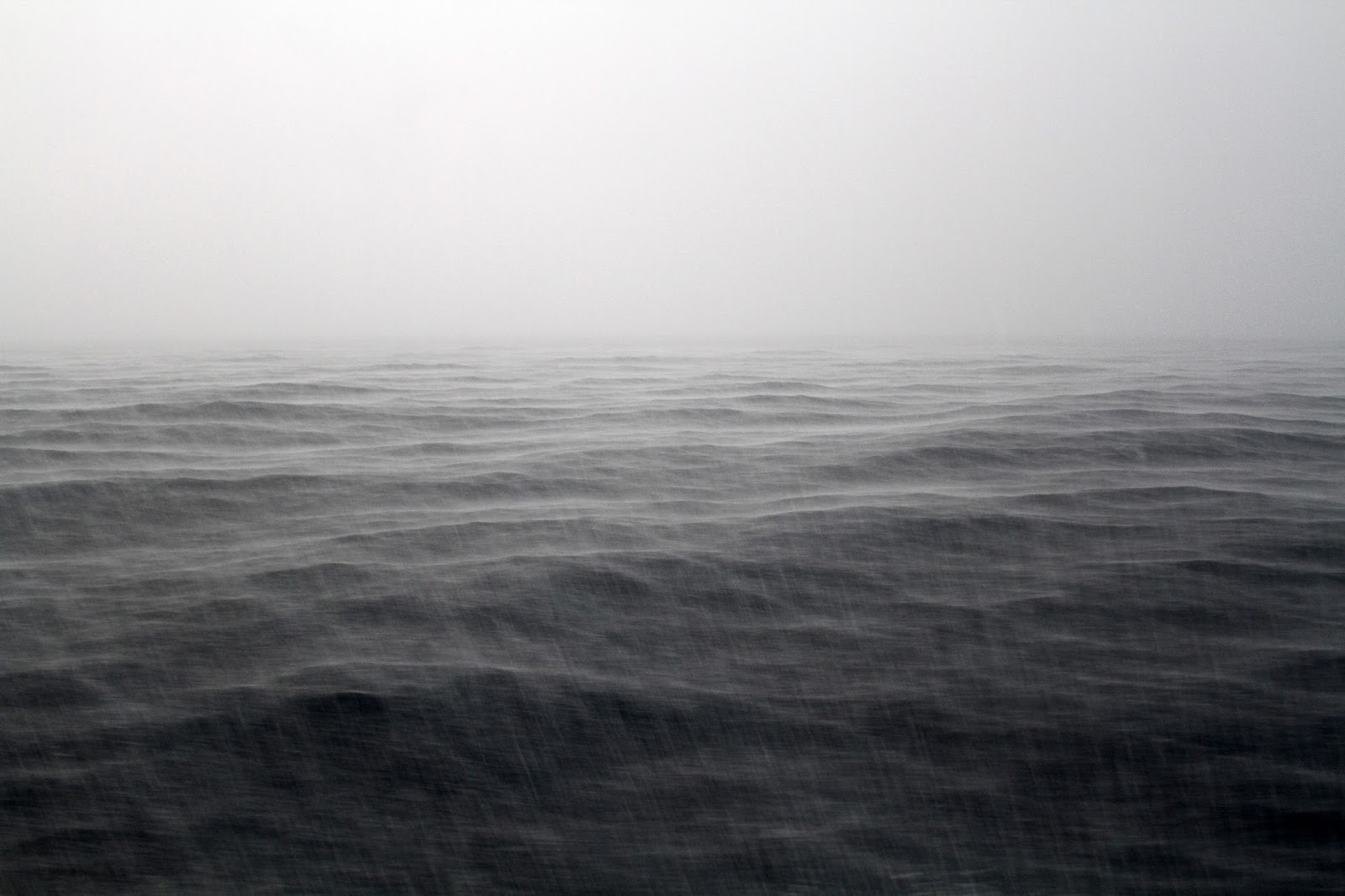 The end our trip is a wet one, with rain lashing in from the sides of the boat 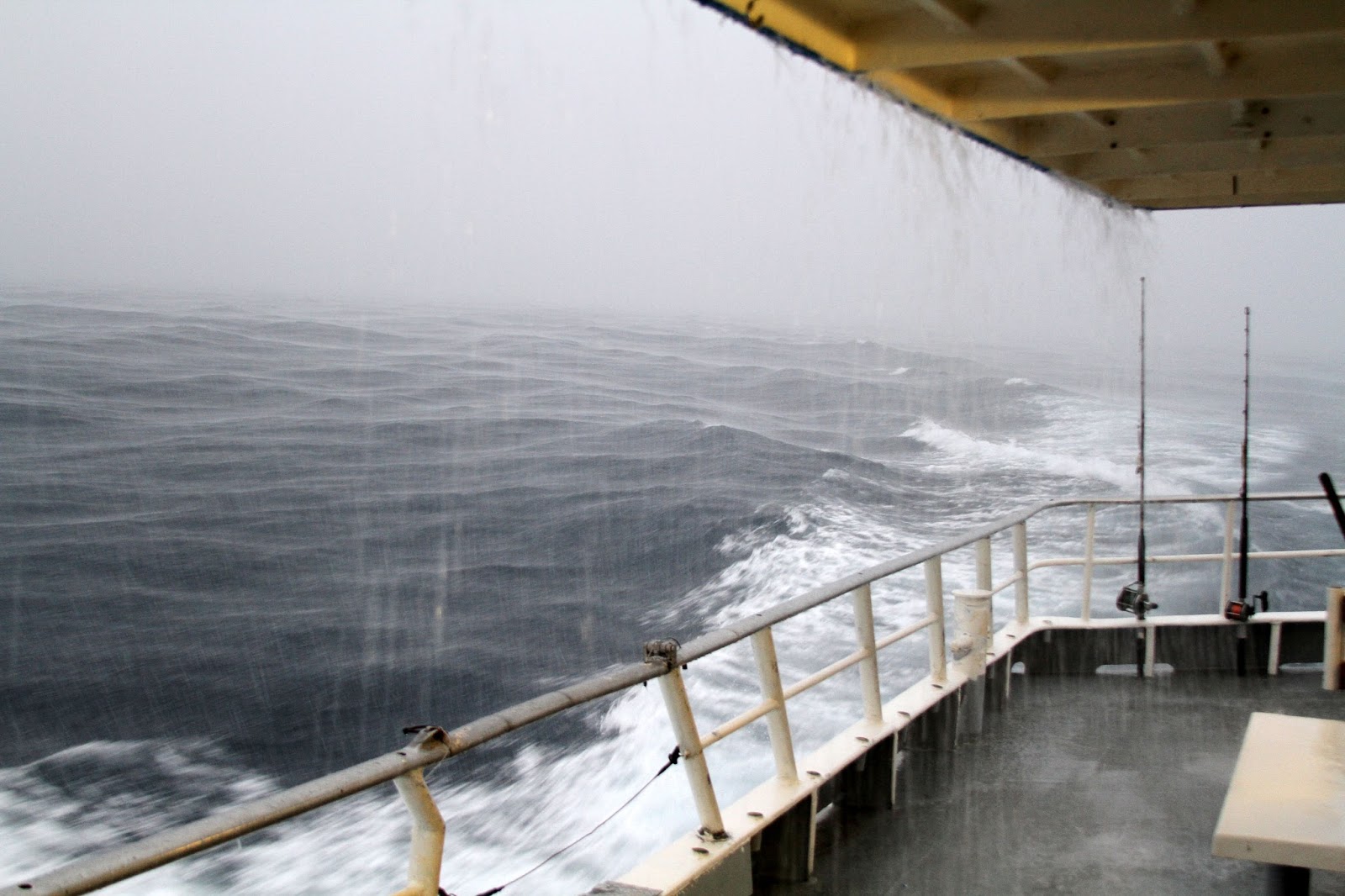 It's the end of a long day at sea. The pilot whales were a real treat, as was the opportunity to compare Sooty and Bridled Terns. And for such a great trip, I have no new year birds - which I'm realizing will be a common theme for the second half of my big year. 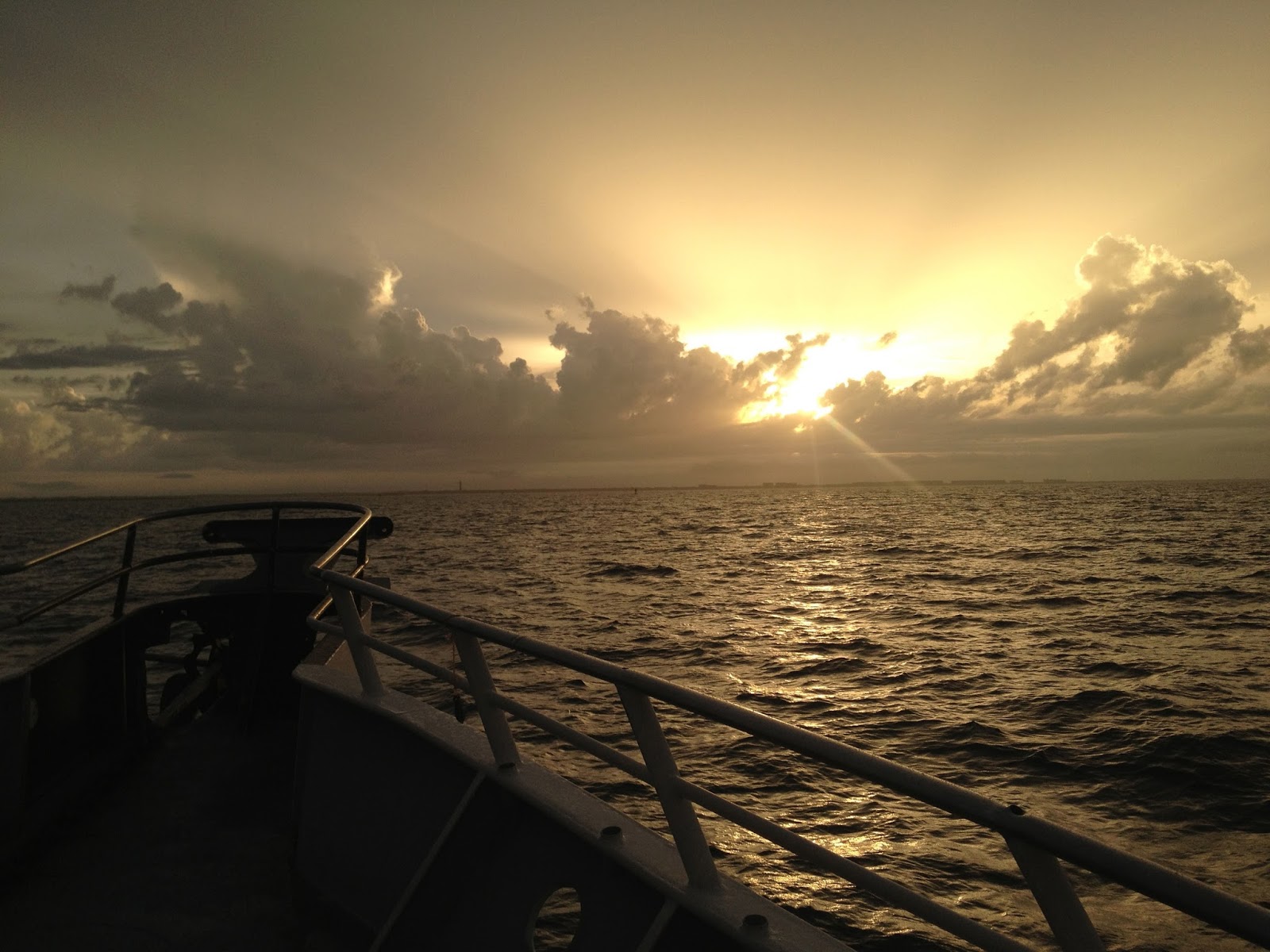 Goodnight Tropicbirds. I know you're out there. Somewhere.