I remember when I first started thinking about doing a Big Year (ideally, and unlike me, you should do this *before* your big year actually starts.) I was excited leafing through the National Geographic field guide, and thinking about all the exciting birds I'd see. Warblers! Hawks! Sparrows! Wow - all those cute owls! And then I got to the grouse and quails, and I slammed the book shut. 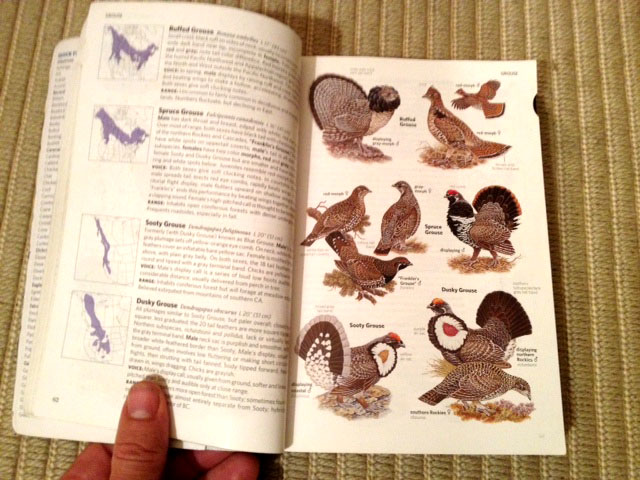 Grouse. Photo taken just moments before book shutting,
which was too violent to show.

The grouse and quail are like teenagers - they take up all your time, money and resources, they live in their bedrooms and you never see them (I don't have any teenagers, but I did used to be one at an earlier stage of my life. And before I get any comments, I'm not suggesting that grouse actually have bedrooms. It's an analogy. Admittedly, not a great one.)


How did these birds get such a bad rap? You've seen the photos - they're adorably pretty. But I wasn't picturing enjoying the foot-stomping, head-pumping dance of the Greater Prairie-chicken or the furry feet of a ptarmigan. I was thinking of the many, many very early mornings walking / driving / hiking through forests / mountains / deserts / urban back alleys, which, if I was *extremely* lucky I might get to see the tail end of a bird as it flushed and flew away to hide somewhere else. Unlike the pigeons in Seinfeld, with whom we have a deal (they get out of the road before we run them over) we have no deal with these birds - instead, they seem to put all their energy into a great game of hide-and-seek. And I knew a lot of my Big Year would be spent doing the seeking. Which brings me back to California, and the end of my trip. The last days would be devoted to looking for Mountain Quail, Sooty Grouse and Chukar - pros among the grouse at playing hide-and-seek.

If you look on eBird, Mountain Quail is common. If you're on a rocky hillside above 2,000 ft, in the west, there's probably a Mountain Quail somewhere near you. Of course, that doesn't mean anything - you might as well be sea watching off the east coast. While you've been busy doing other things with your life, Mountain Quail have been putting all their energy into learning how to hide.


Our first stop is Arrastre Creek in the San Bernadino Mountains. Mountain Quails are *allegedly* so common here that there are even photos of them being eaten by rattle snakes (oh yeah, they're also pretty common here too.)

Based on my experience at Arrastre, here's a quick guide to birding the place. It's titled, "How Not to Look for Mountain Quail at Arrastre Creek" …

1. arrive at noon, when it's really, really hot and there are no birds
2. drive a new, shiny mid-size rental car along a road described in the guide book as suitable only for high-clearance vehicles
3. go on a Saturday, when all the locals are out testing their noisy motorbikes
4. leave all your water in the car when you're out looking for quail. Even better - don't take any water with you at all. Water is for losers!
5. go with someone who's never seen a Mountain Quail before, and who's not doing a Big Year, and then head off in different directions. This is an absolutely guaranteed way for them to see the bird and for you not to.
6. go back the next day and repeat all the above. This time though, neither of you will see the bird, and you'll only smash up your car some more* 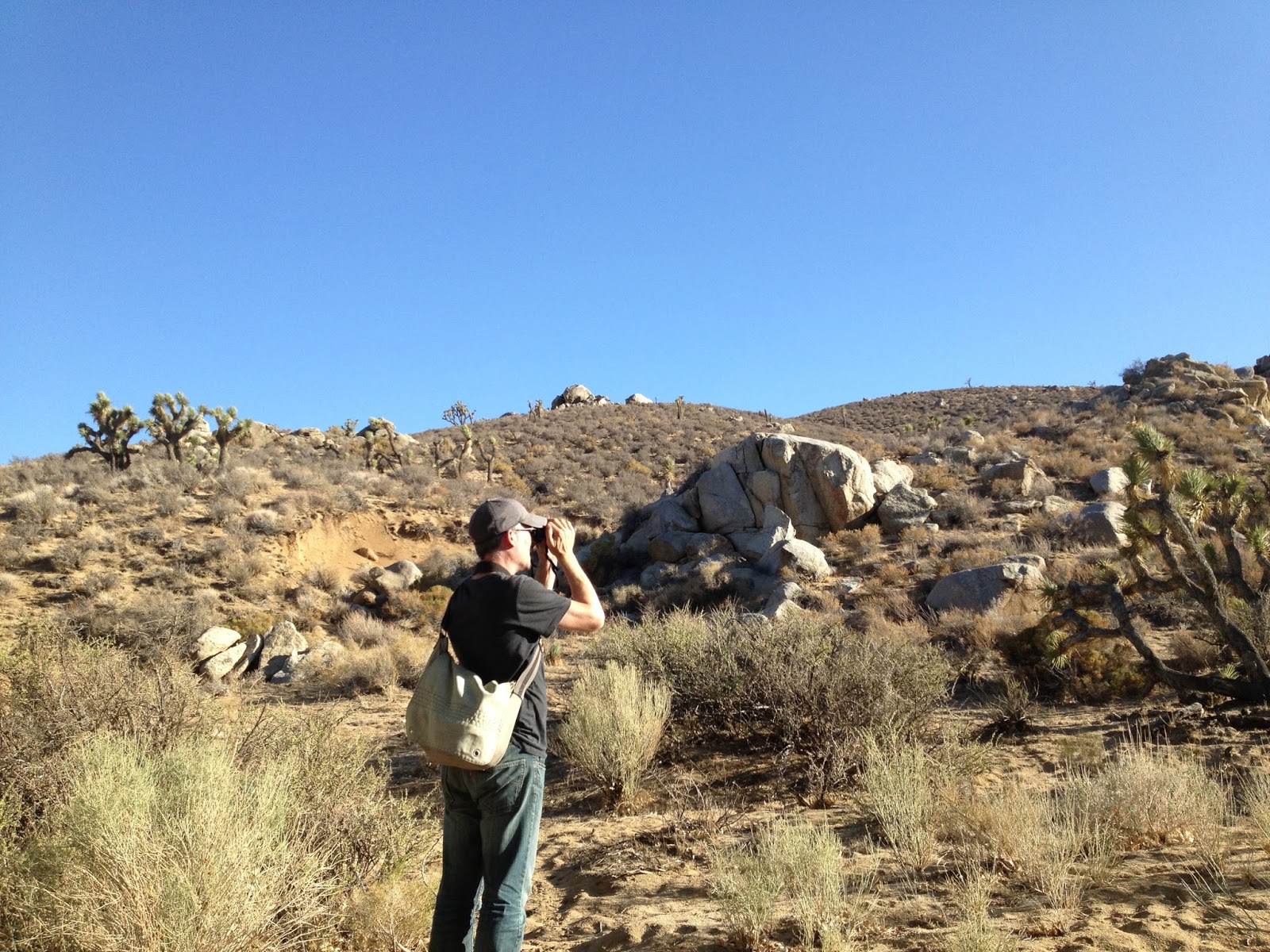 Not looking at a Mountain Quail at Arrastre Creek.

That's right, Gerri saw the bird and I didn't. What did you ask? Could I trade a bird with her? Well, I've seen two Gyrfalcons this year, and Gerri hasn't seen any. Surely a Gyrfalcon is worth at least a lousy Mountain Quail? Unfortunately, I looked through the ABA listing rules, and couldn't find a section on bird trading.

[* If you work for a car rental company at SFO that rhymes with "shifty" and you've found this blog by googling "massive underside damage to Mazda - how the hell did this happen?" then the above account is, of course, entirely hypothetical.]

We left Arrastre and headed north to Kern County, to a place in the middle of the Mojave Desert called Galileo Hill that's "reliable" for Chukar. Unlike Mountain Quail Chukar is an introduced species from the Middle East and Asia. Galileo Hill overlooks a resort community called Silver Saddle. Apparently, the Chukar like walking all over the hill and coming down occasionally to enjoy the shade of the resort trees. 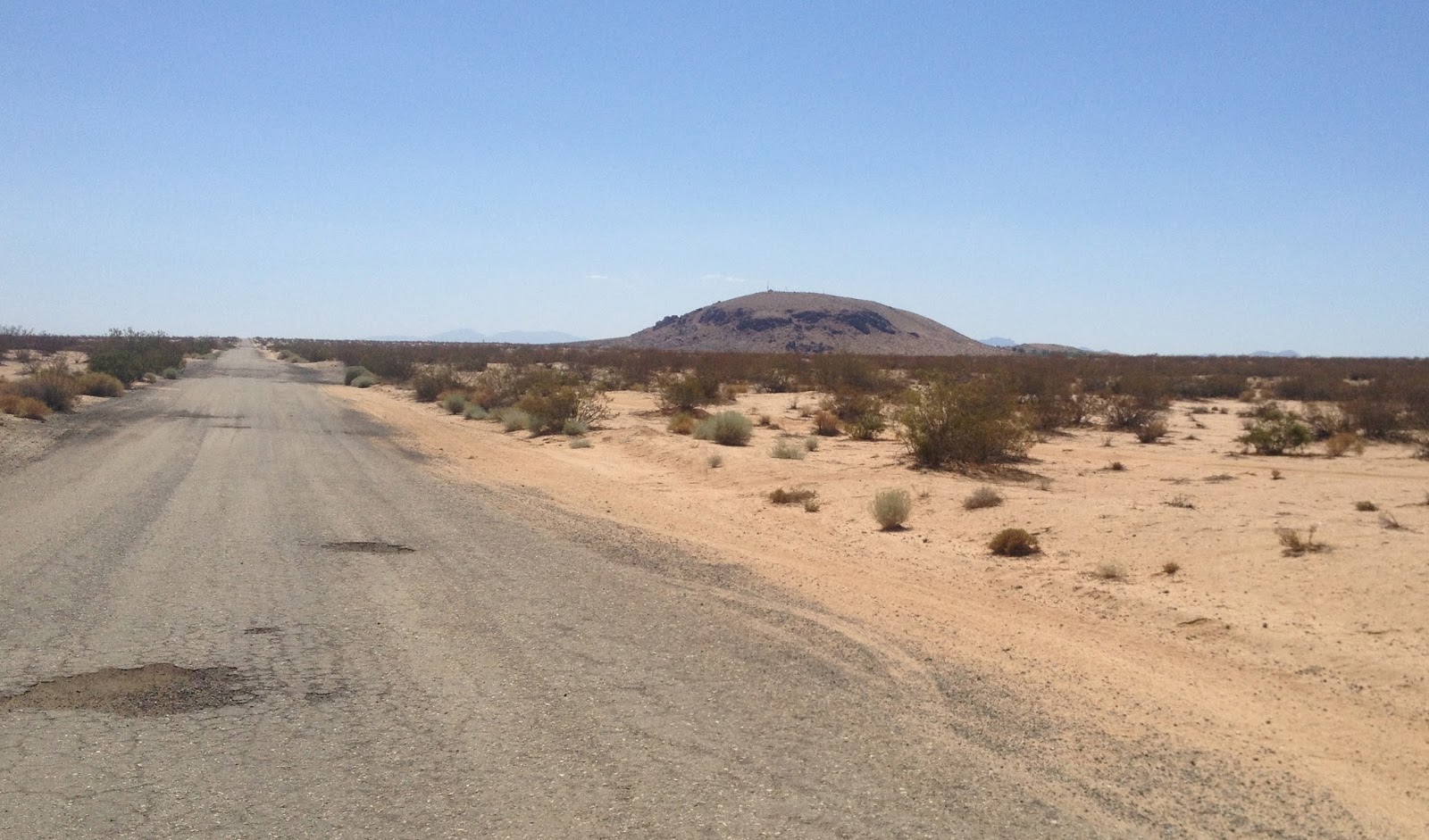 The approach to Galileo Hill through the Mojave Desert.

Silver Saddle is beautiful and probably a fun place to stay. There's lots to do - tennis, golf, a restaurant, bar, pool tables, etc. Only there's no-one there to do it with. The buildings were all open, but the whole place was eerily empty, except for a very hot black cat, whining at the entrance to the club house. The menus were lying open on tables in the restaurant, the bar was open, a TV was reporting the local weather (hot again), cupboards were open exposing all manner of potential freebies (a lifetime supply of tampons, anyone?) It was like a zombie apocalypse. But without the zombies.

In the last building we check, we finally hear a voice. It's a woman on the phone. Based on her expression, our looks betray our mixed emotions - the excitement at finally finding a human here, and disappointment that the zombie apocalypse still hasn't happened. (Which reminds me, when are we getting those flying cars?) But she does grant us our wish - to bird around the site. Though she's not sure what a Chukar is, and evidently decides it's best not to ask.

We drive half-way up the dry and hot hill. No Chukar. Thinking they might be relaxing under the trees below, we drive around the campground. After about 10 minutes, I spot silhouettes under a nearby tree and slam on the brakes. Chukar! The birds start running away. I jump out of the car in pursuit. Before the birds decide to swap leg for wing transportation I manage to get a quick photo: 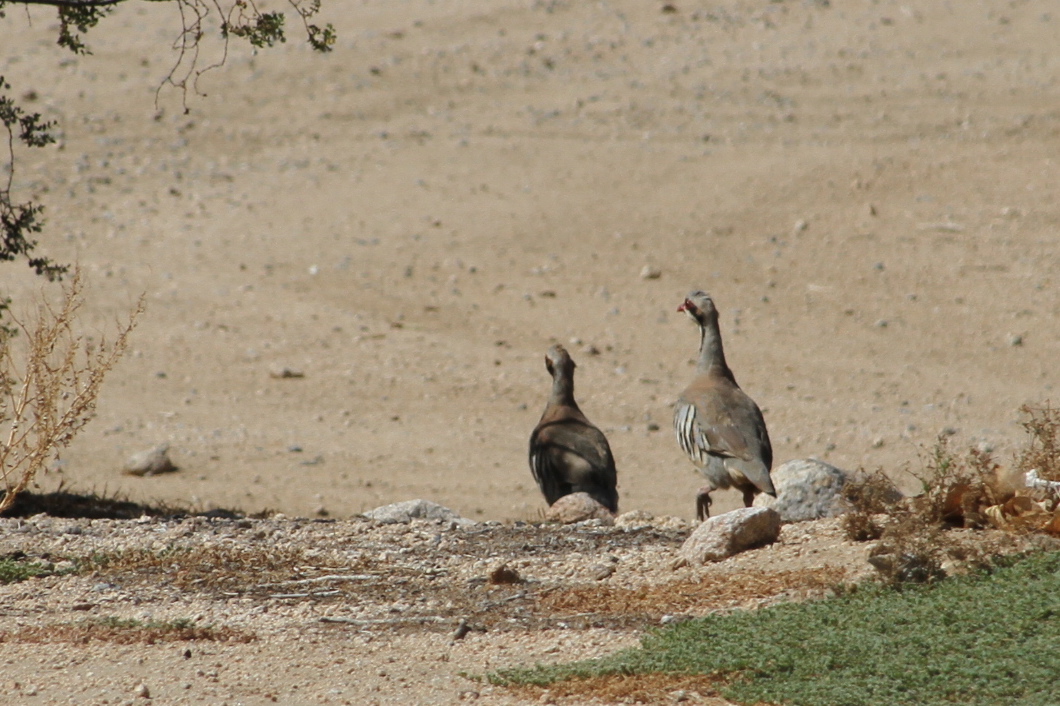 Chukar. Quick - where can we hide now?

It wasn't much of a look, but much better than the no view I was expecting. And after 2 days at Arrastre, we were due some good grouse luck! What a great day! 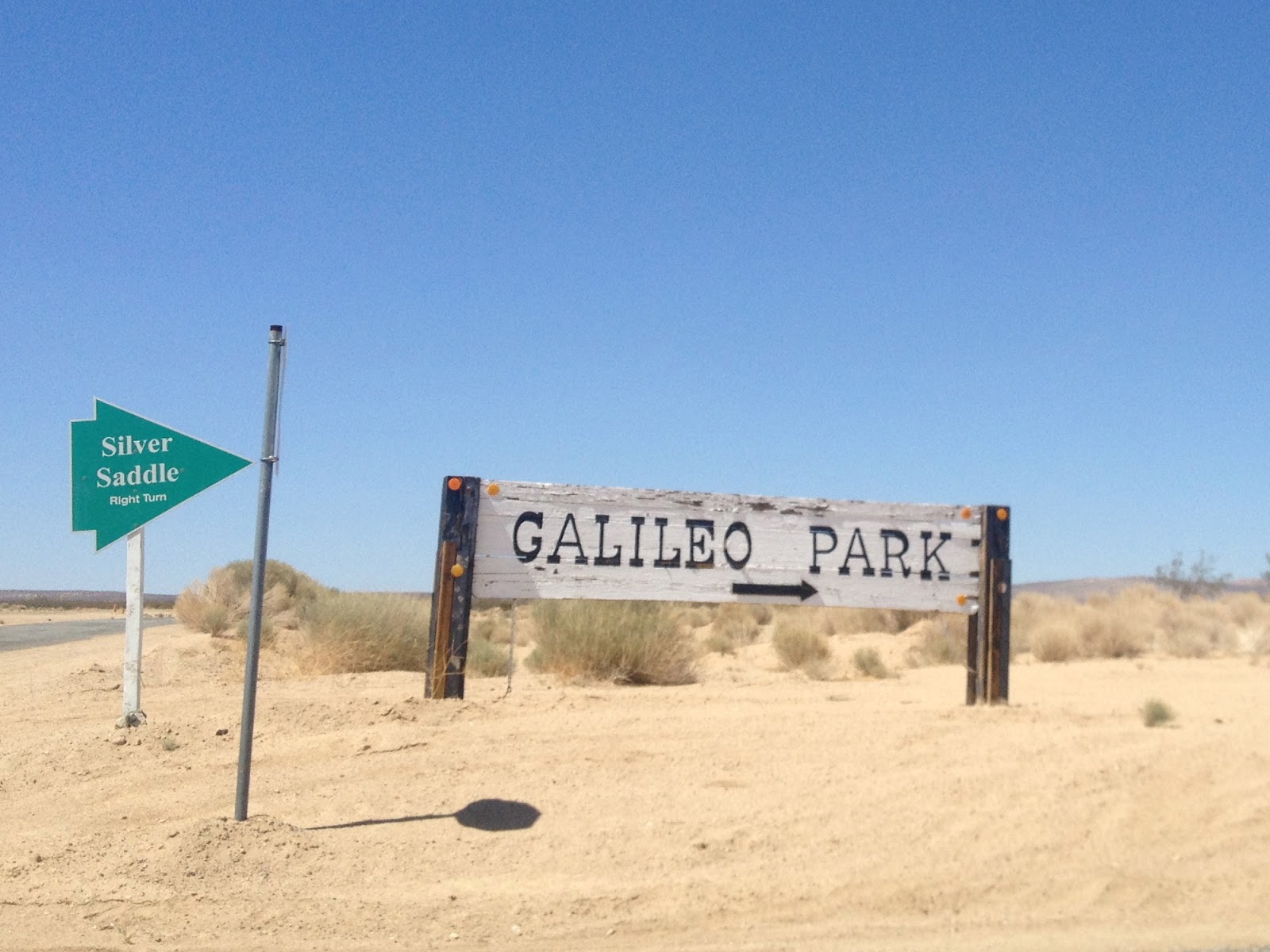 We then ruined a great day by looking for Mountain Quail again. This time at Butterbredt Springs, up in the southern Sierra Nevada. 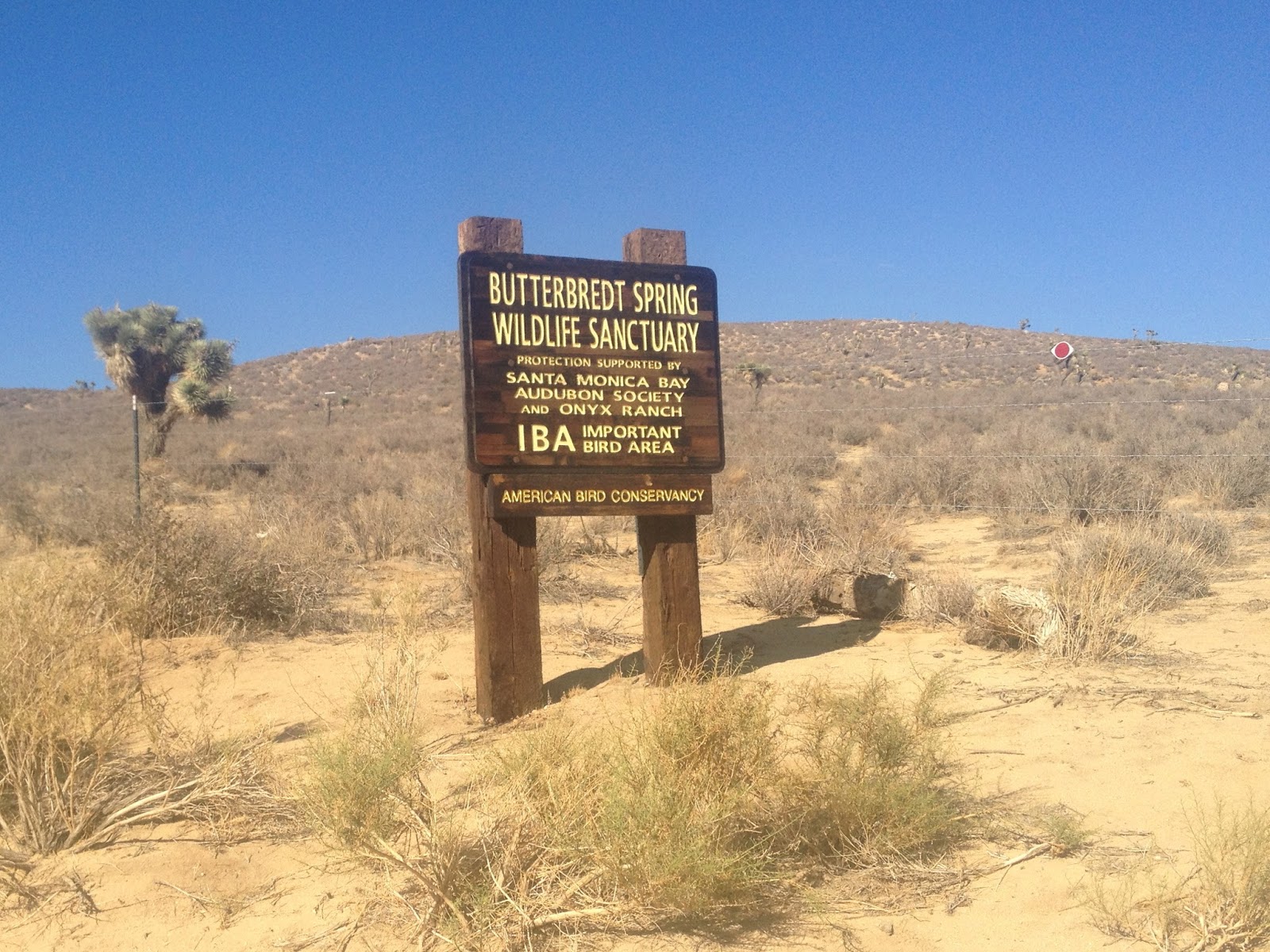 Unlike Arrastre, the dirt / sand road to get here, although very steep, is fantastic and doesn't fill you with dread about being stranded in the desert. What it does share with Arrastre though is a complete lack of Mountain Quails. It does have California Quail though, which got me very excited before getting me very angry. 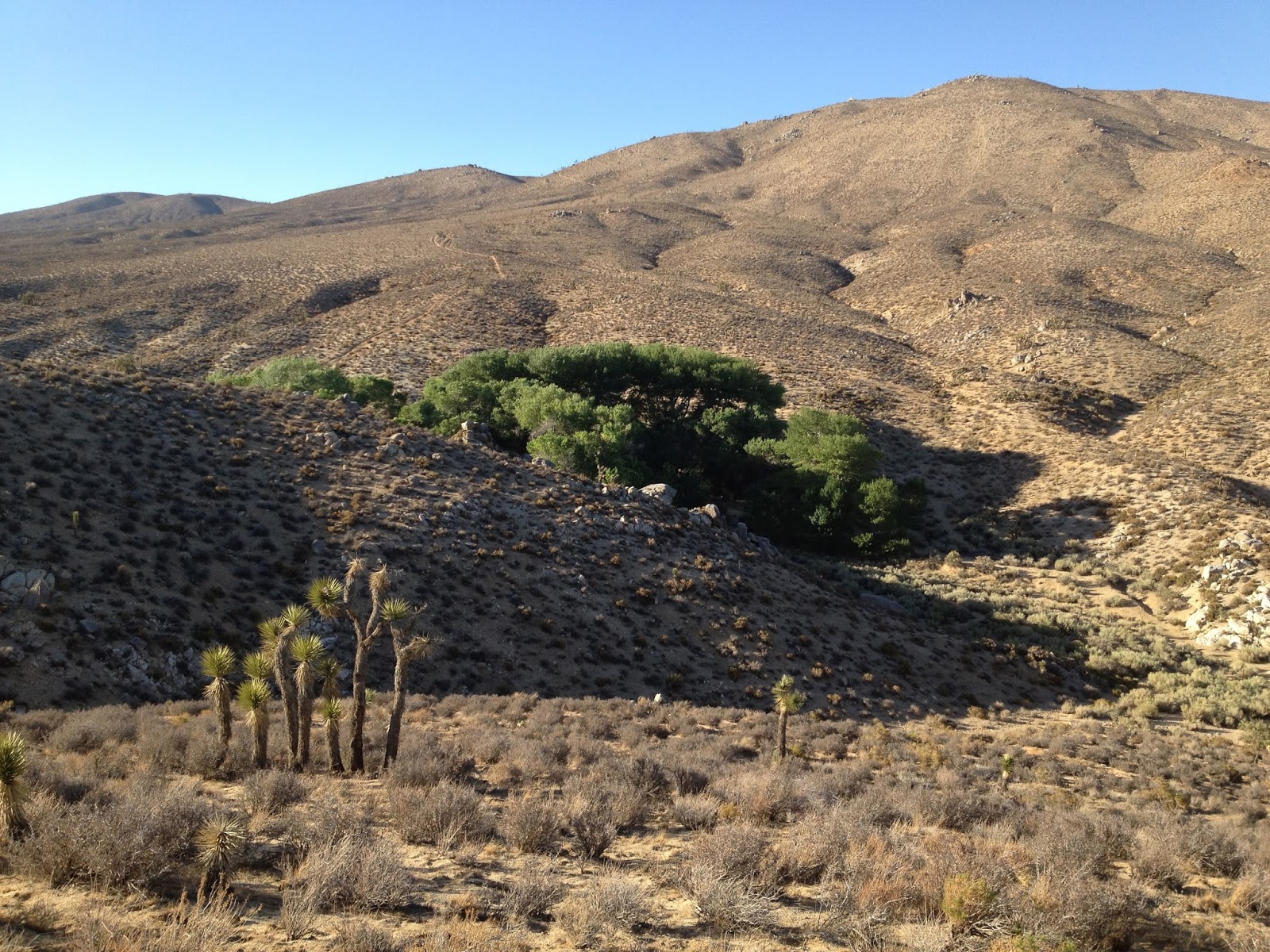 Butterbredt - a natural spring in the desert mountains.
Would be even more pretty if there were Mountain Quails running around at your feet.

We find a motel in nearby Mojave, but it's too late for any respectable food establishment to be open. (Jack in the Box was open all night.) Dinner tonight is thus a culinary compromise: 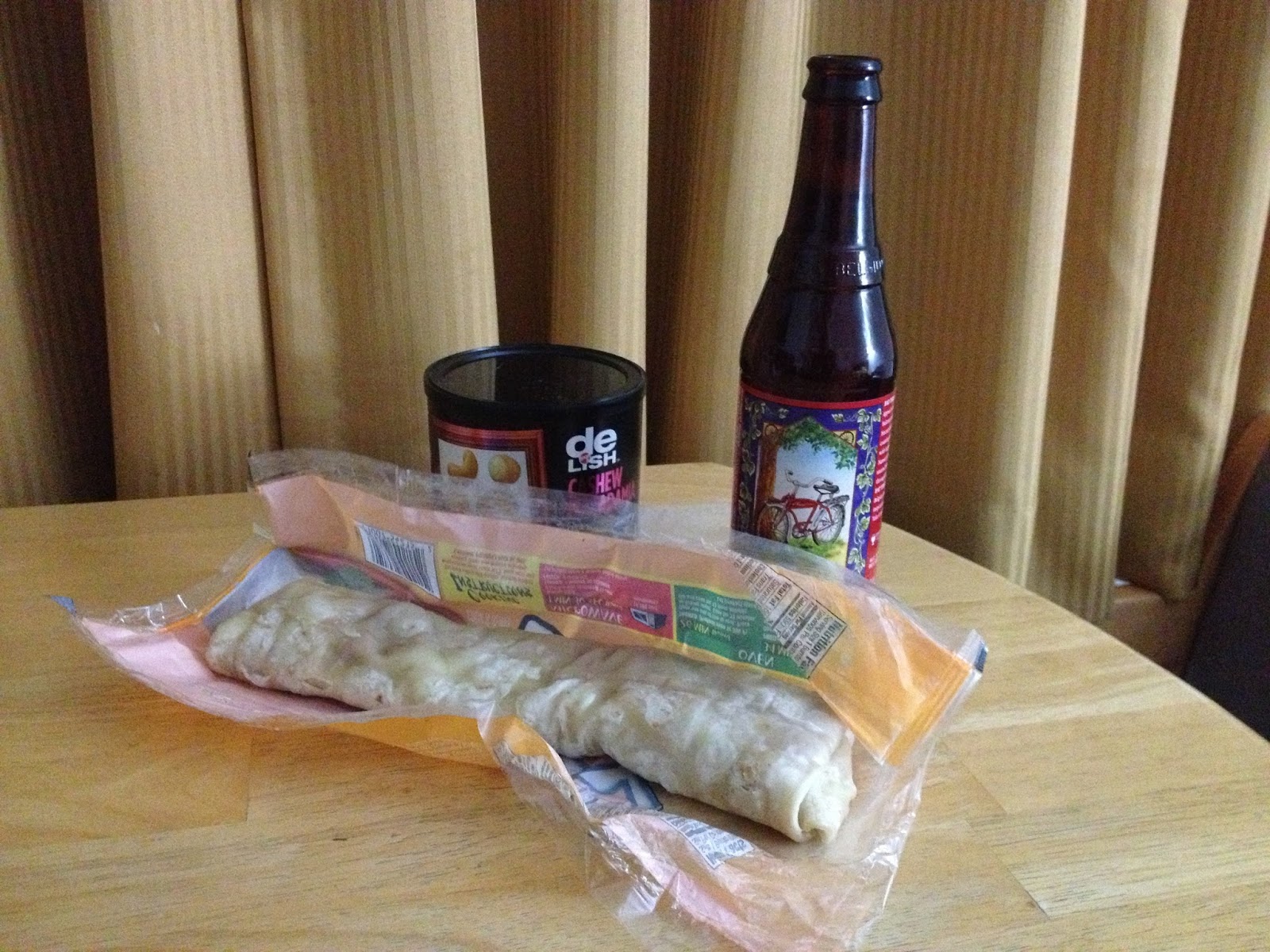 On the menu tonight: microwaved gas station burrito (lacking any of the advertised filling), nuts and a beer.

We awake at 4:30am to repeat the Butterbredt Springs experience - right down to the not getting any Mountain Quail detail.

The rest of the day we head north towards Yosemite, around the eastern side of the Sierra Nevada. On the way we stop at Whitney Portal in the Sequoia National Park. This is the southern limit of the Sooty Grouse, and is apparently a good place for them. The Mount Whitney Trailhead is a human zoo. It's the end point for a mountain run (although all the "runners" seem to be walking) and the start of a steep, winding trail that's thick with hikers. It's close to mid-day, and I'm thinking that our timing may not be ideal. But, it's a beautiful view, so we join the hiking crowd and slowly make our ascent. 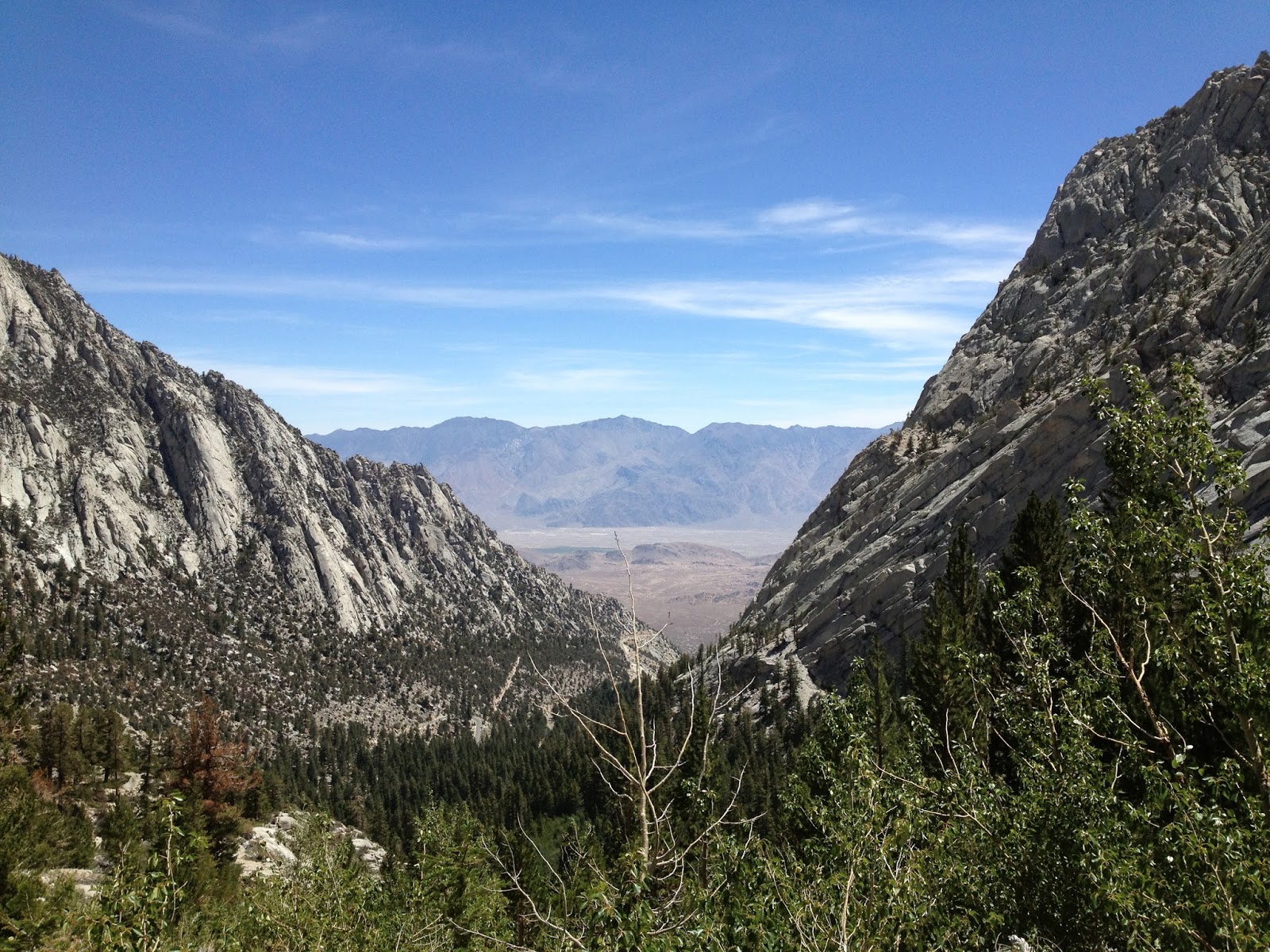 View from the Mount Whitney Trail. 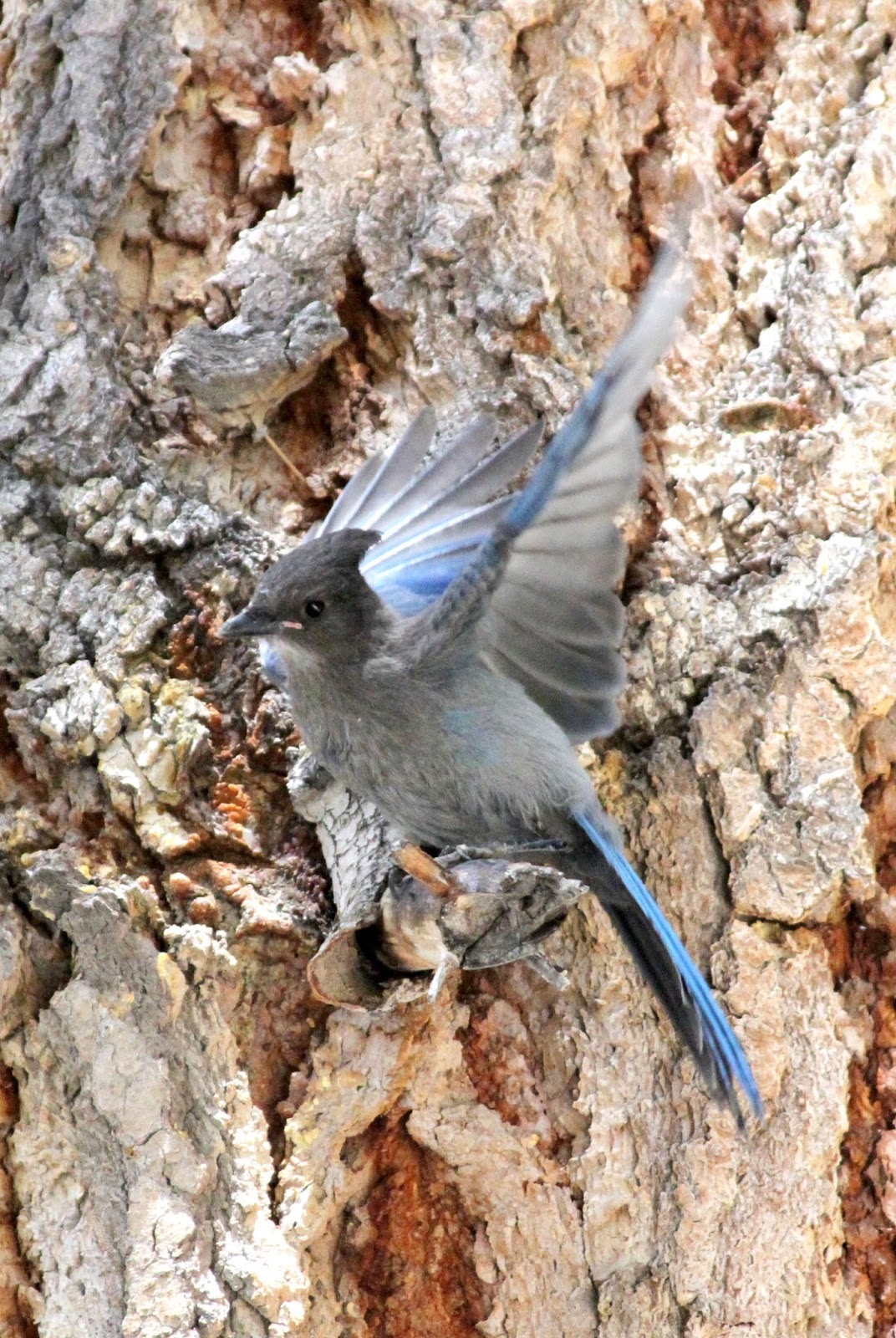 As I'm scanning the mountainside wondering how much further before we ascend above the tree line, I spot a large bird flying from the cliffs toward the trees above us. It's a shape I'm unfamiliar with, until I realize I'm looking at the underside of a flying grouse. Sooty Grouse! And then what looks like a baby version of this follows the same flight path. As soon as this one lands, another drops down. And another. I race up the hill to where they land. I stop short as I spot a bird on the trail… 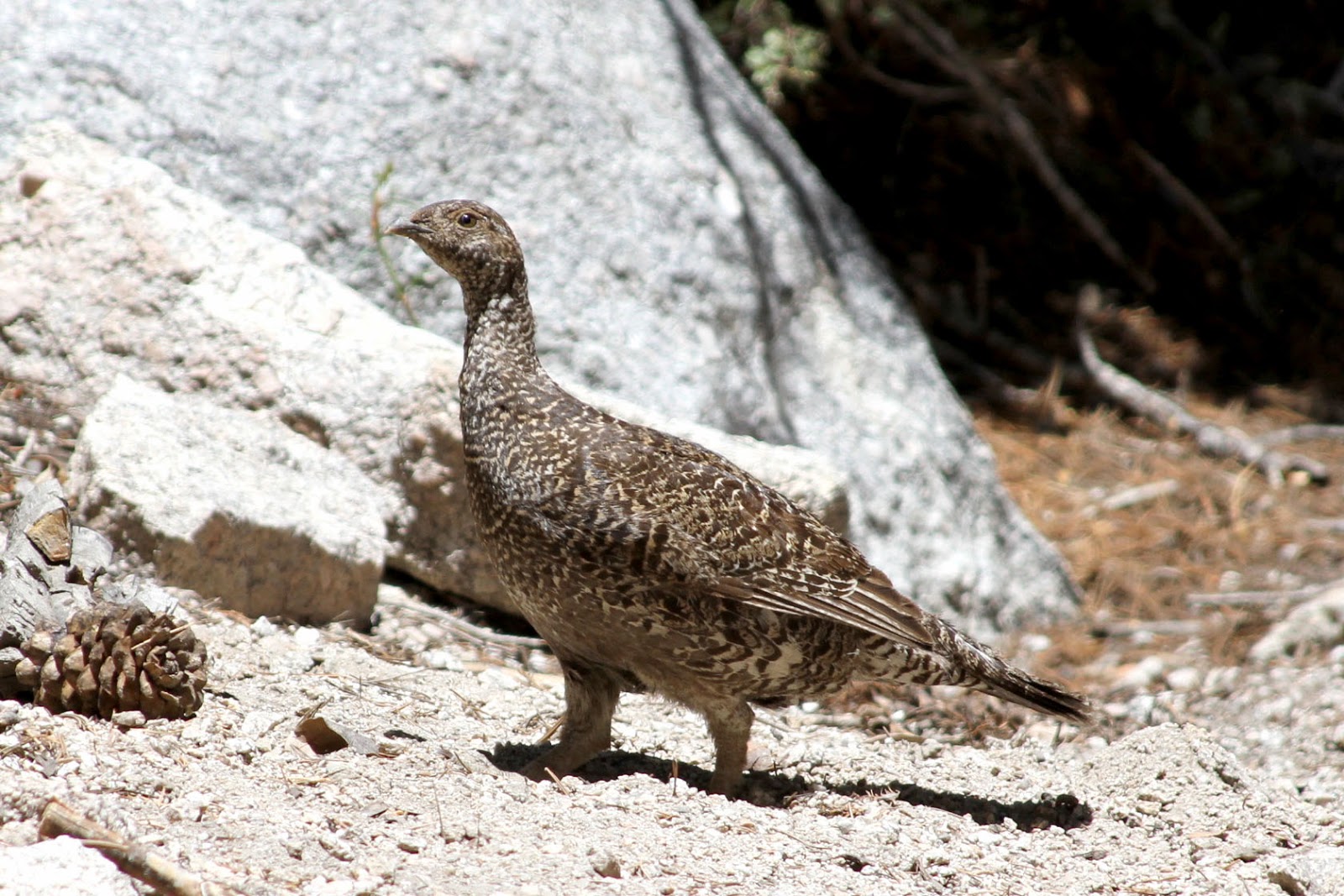 The mother is continually calling to her chicks, who soon appear on the trail too... 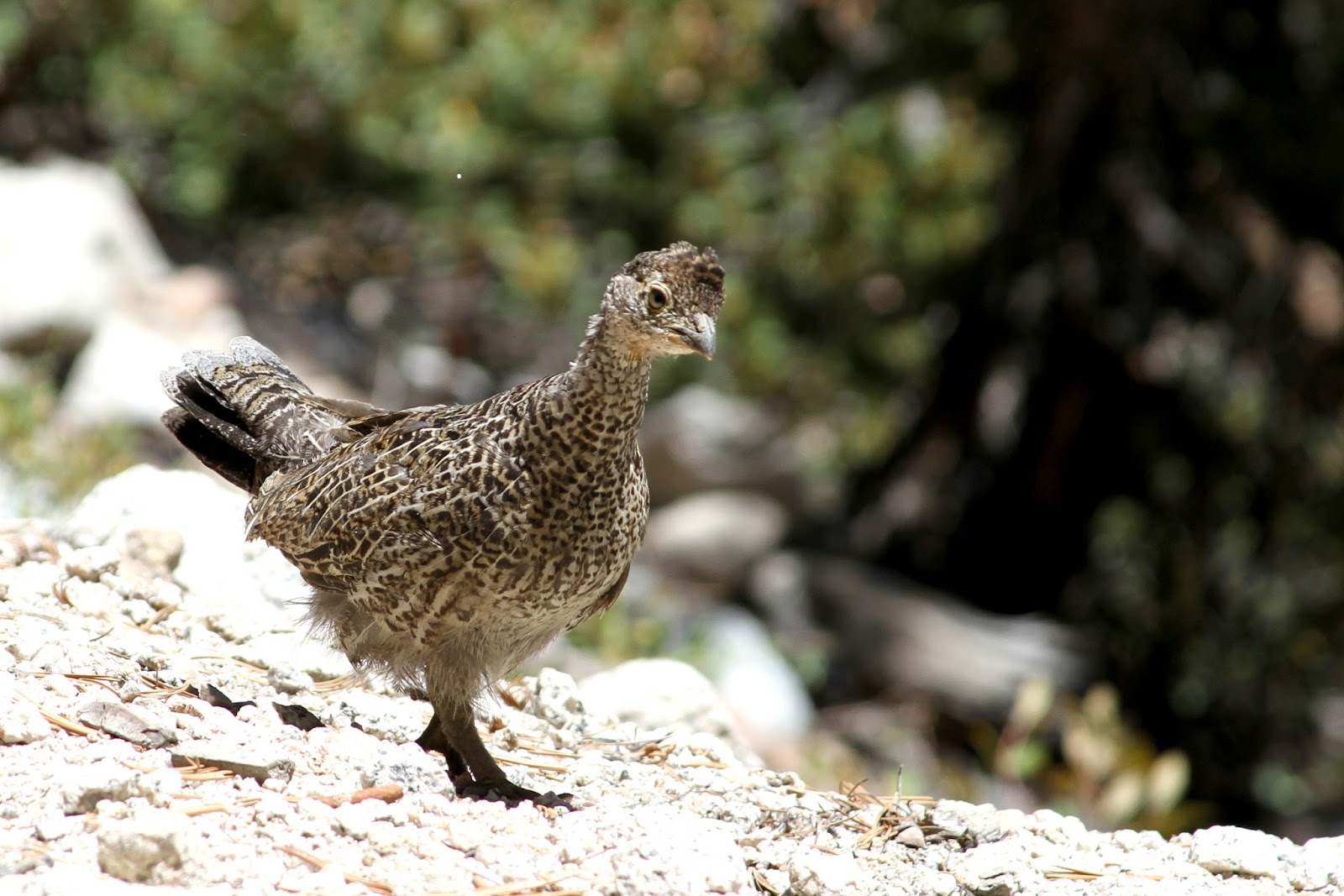 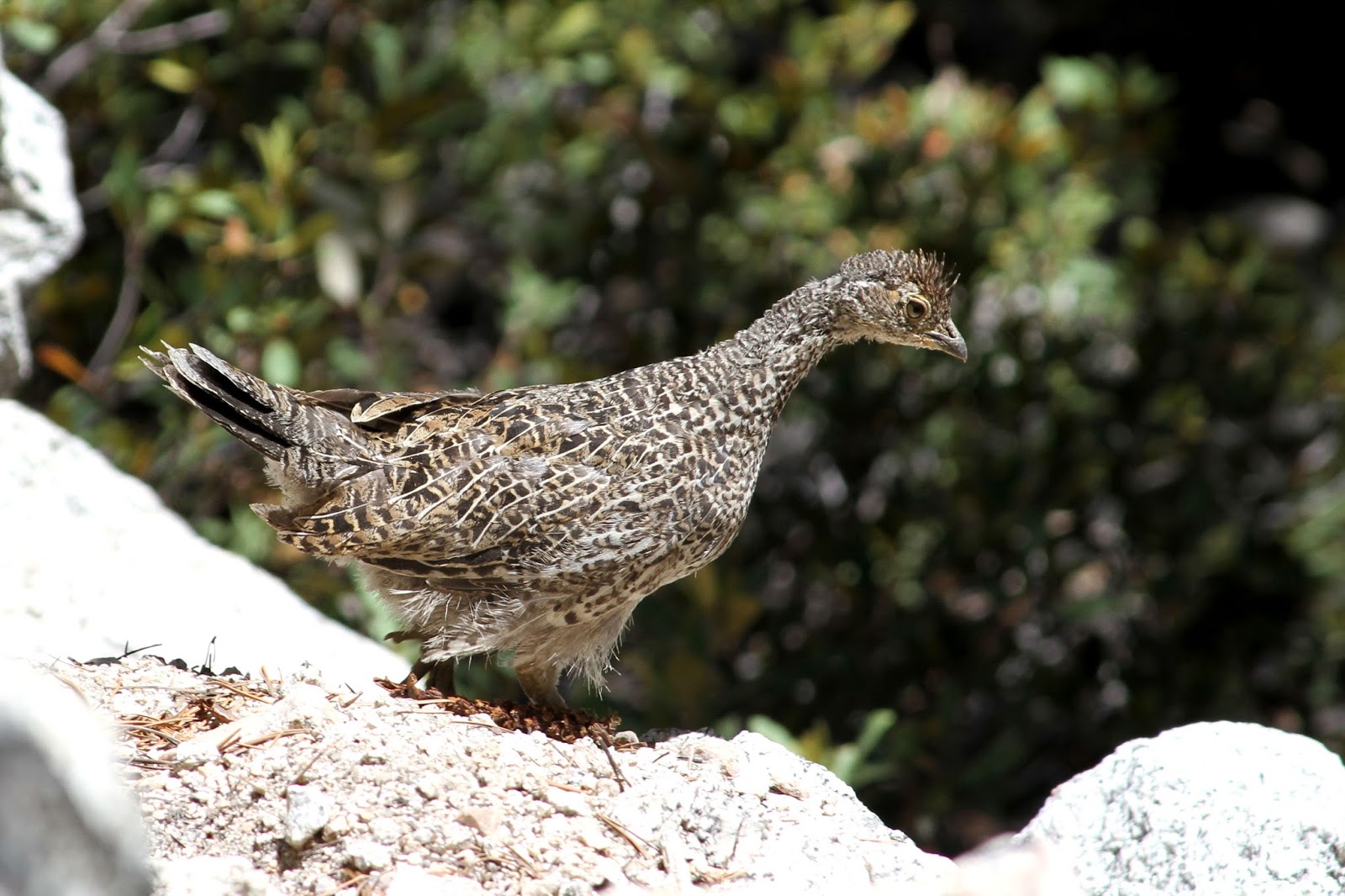 Thank you Dan King (San Diego) for suggesting Whitney Portal! That saved a lot of time in Oregon or crappy Washington State! 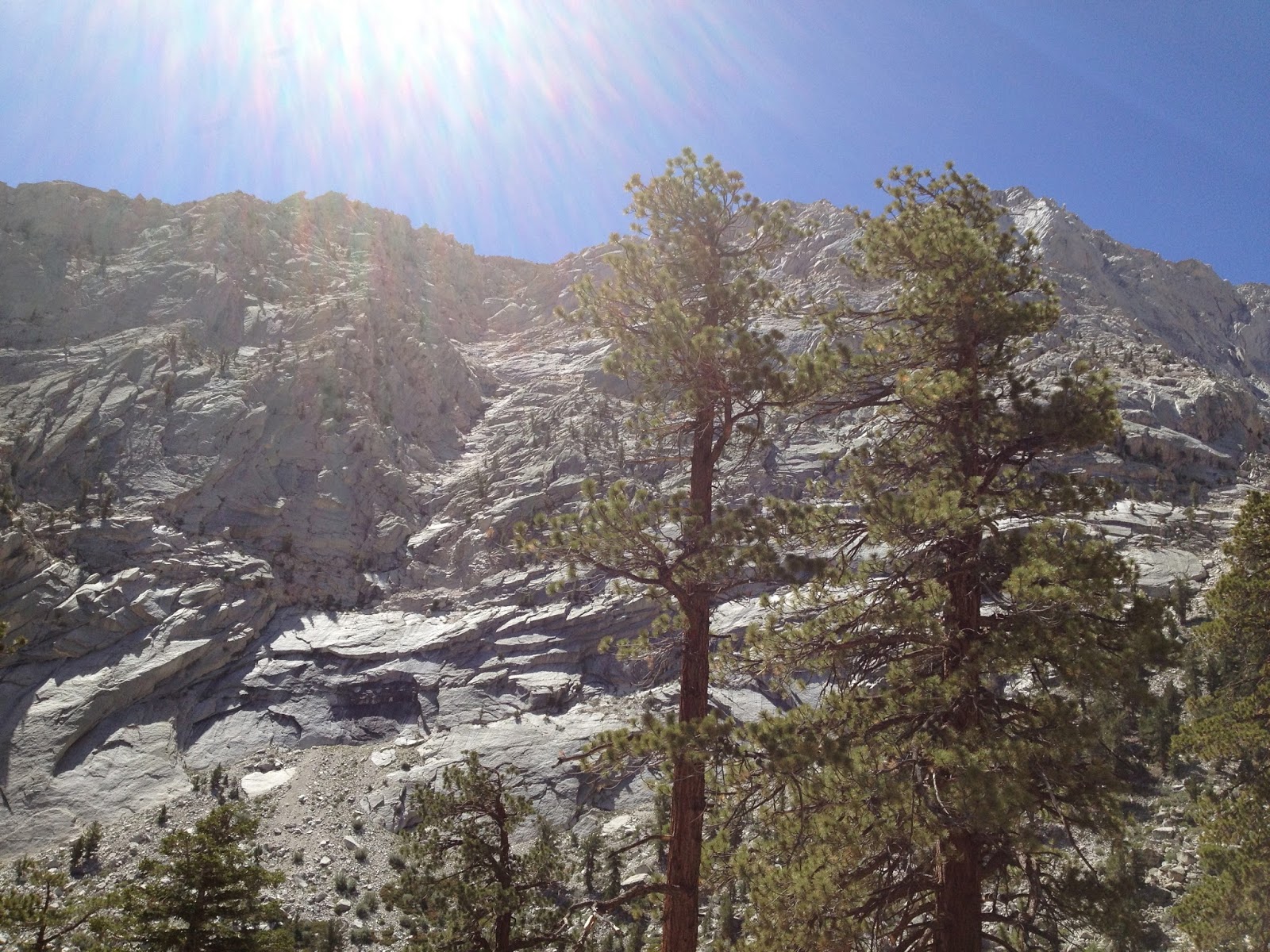 An early start the next day finds us driving through Yosemite National Park. Instead of taking time - like all the other sensible people - to enjoy Half Dome and El Capitan we decide to entirely waste our allotted time checking out some spots for Mountain Quail.

On this trip we've spent over 12 hours walking through Mountain Quail locations and not heard or seen a single bird (except for Gerri's badly-timed sighting.) Welcome to my new nemesis bird!