Timing and luck play a important role in any big year. And while I didn't see the White-tailed Tropicbird yesterday - the raison d'être for this trip to FL - I did have a chance at a surprise rarity now that I was here. A Fork-tailed Flycatcher had been found last Weds at Lake Apopka, less than an hour away from Orlando. There had been one earlier in the year - spending over 2 weeks in inconvenient Louisiana. I didn't chase it, and then kind of regretted it. I wasn't going to let a second chance pass me by.

But first, I was going to spend the morning chasing another one that got away - the Budgie, a rather painful miss earlier in the year (see here.) And this time, I'd have some local help. Thad Roller, a birder from Tampa, has been reading my blog and kindly offered to not only wake up early and make the drive to unglamorous Hernando Beach to meet me, but also to leave his young 2 *week* old child at home for a couple hours of birding.

The Budgerigar is only a few strikes away from being swept out of the ABA birding game. This long-tailed green and yellow parakeet was first recorded in the St Petersburg region in the 1940s. By the 1970s there were over 20,000 birds. But since then its dramatic rise has been countered by an equally dramatic decline - possibly due to competition with the original exotic, the House Sparrow. It's our only exotic that's a code 3, and there may only be a dozen or so birds left in the wild. And if those disappear, it'll be relegated to code 6 - extirpated and uncountable. So - better go get that bird soon!

We drove in Thad's car around the local neighborhood, where he showed me the feeders that he's seen the birds on. Only this time the feeders were empty. We decided our best strategy was to walk the streets, looking and listening for their distinctive calls. Gulfview Drive is one of many here that are carved into a marina. As we walk we're never far from water, the chuckling of the Laughing Gulls, and the huge Brown Pelican silhouettes effortlessly floating by. And soon, we're even closer to the water as the skies open, and we're completely soaked by large amounts of it. Completely soaked: rain here is binary - a stormy deluge of biblical proportions, or nothing. (Not like the pathetic, continual drizzle of the UK that eats away your soul...) I feel bad that Thad can now add "morning shower while fully dressed" to his morning of "birding fun". A morning that, after the rain stops, and we say goodbye, does not involve Budgie.

I have a few minutes left before I absolutely must leave to have enough time for the Fork-tailed Flycatcher (my flight leaves at 4:30pm.) So - I give the street one last farewell look, telling the birds (out loud!) that I really am leaving this time. And this time, there seems to be a lot more activity now that the rain has cleared, especially on the overhead wires. As I reach the intersection with Biscayne, I notice two birds with long pointy tails. Budgies!! 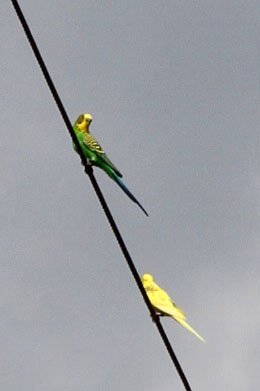 Budgerigar at Hernando Beach - get them while they're still fresh! And countable!

Thank you so much Thad for helping me with Budgie, and being the proverbial sacrificial lamb that let me get the bird! Thad has just started a birding and wildlife tour company for South America - Impact Expeditions - check it out. It's a non-profit where the proceeds of the tour directly benefit the local communities. Good luck on your new venture Thad and congrats again on the new addition to your family!

Lake Apopka is north of Orlando, and surrounded by orange groves and agricultural land. It's also very hot and humid. Only mad Englishmen and desperate birders would even consider being out in the midday sun here... 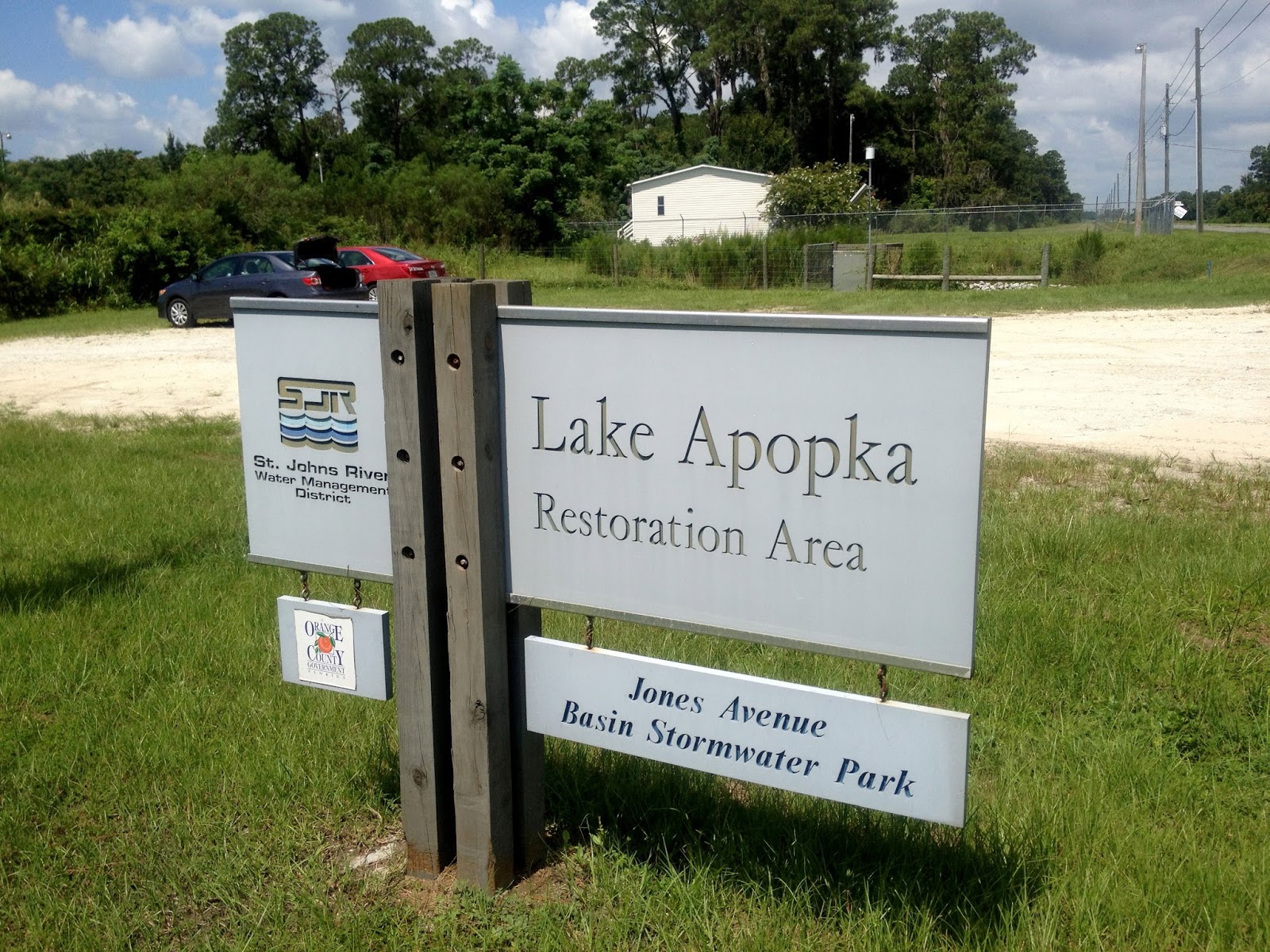 Lake Apopka - home this week to mad birders (and one Englishman)

As I'm walking briskly along the grassy track towards the reported location of the bird, I'm aware of my flight departure time ticking away. I really need to get this bird quickly! I don't stop for the calling Bobwhites around me, and try not to notice the incredibly tempting swarms of Swallow-tailed Kites wheeling over my head. (There are over 60 of them!!!)

I finally get to the wires that the bird's been sitting on. No bird. Damn! Suddenly I spot a flycatcher near the wires... 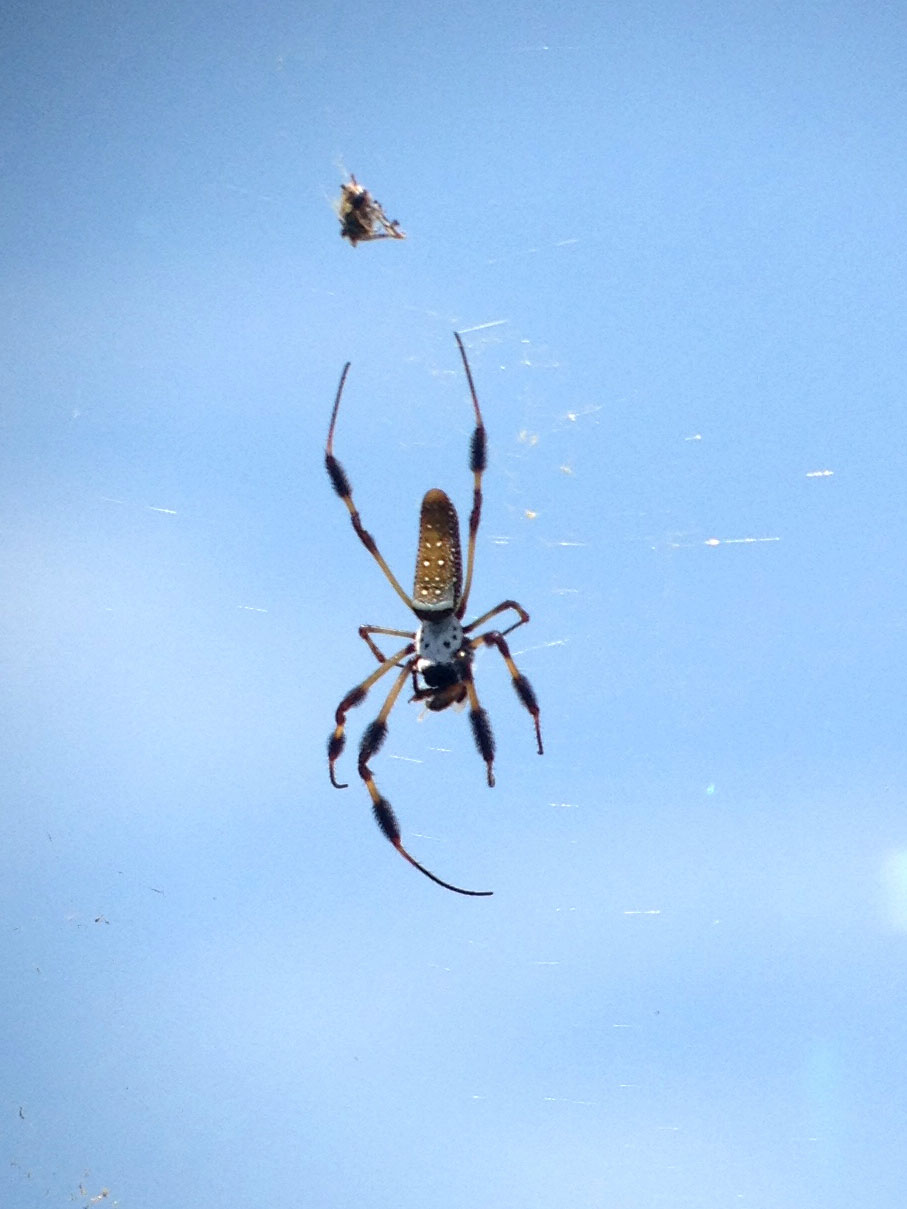 As I'm contemplating how unpleasant it would be to be less than scope distance away from this particular animal I notice movement to the side of me. This time a real flycatcher. Before it lands on the wire in front of me a broad smile spreads across my face at the sight of the long tail feathers... 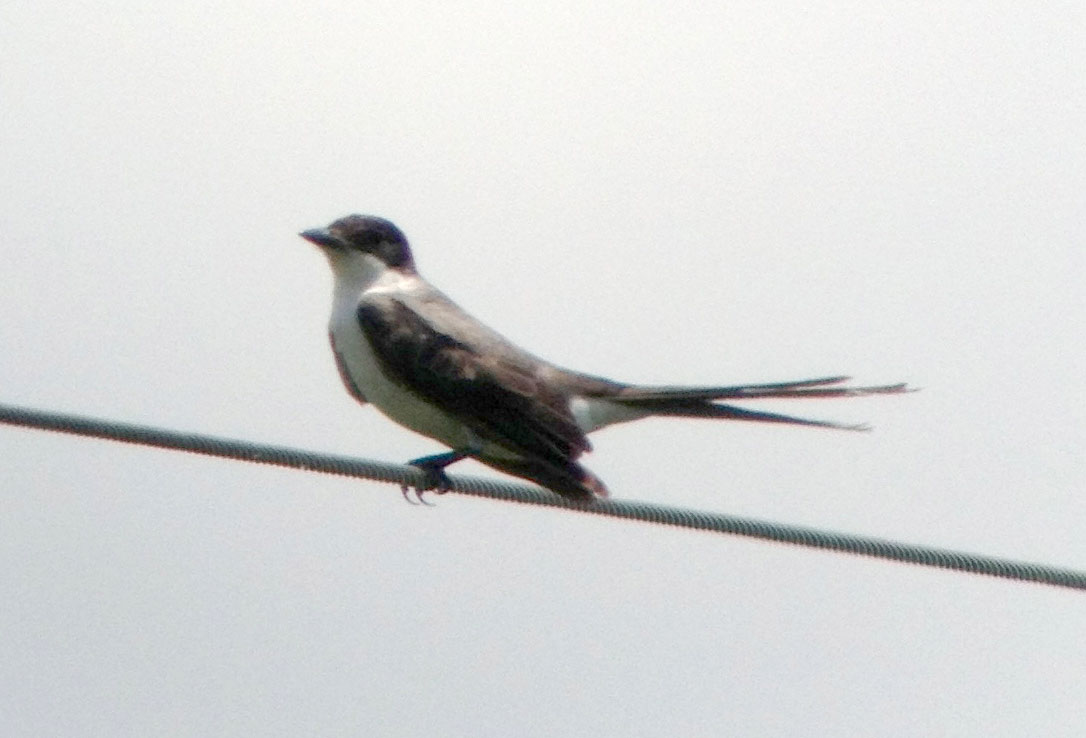 Fork-tailed Flycatcher. Yay!
This is a juvenile bird - in adults the tail is much longer:
they have the longest tail to body ratio of any bird on the planet.

I relax and watch the bird for 15 minutes before it flies off to the thick vegetation and out of view. I have enough time before my flight now to enjoy the kite show... 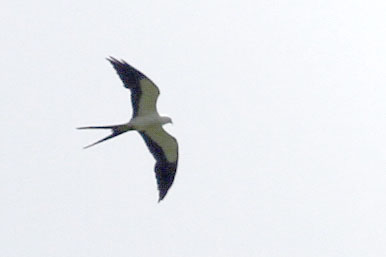 I've spent a lot of the past month in some ridiculously hot places. Hiking up Big Bend in TX was over 100F, as was the Salton Sea in CA. But this place - at a modest 92F - was the most exhausting. I was only out for about an hour, and I'm a mess.... 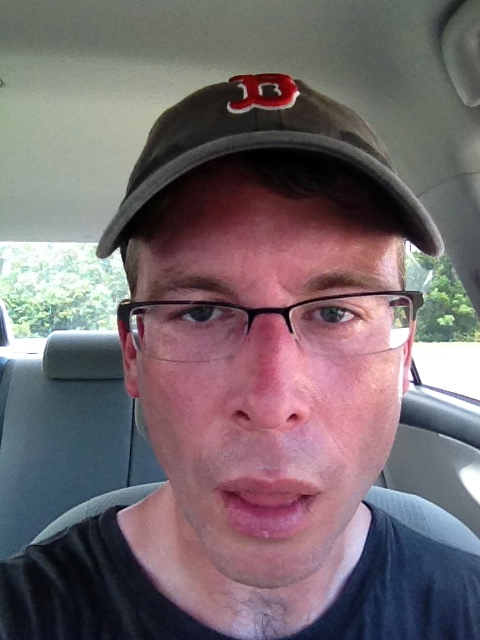 I may not look so great, but my Big Year just looked a whole lot better!