This one was too cute to resist. Hence, back to California (3 days after leaving!) and not back home (2+ weeks after leaving.) The temptation: Lesser Sand-plover (code 3.)

There's a good chance I may get this bird in AK later this year, but it's a life bird, the pics I'd seen were so great, and I couldn't risk waiting. The bird was found 4 days ago in the South San Diego Bay area. It's been keeping a fairly regular schedule - appearing in a pool off the bike path at high tide.

I flew out of Orlando after my Budgie and Fork-tailed Flycatcher success and landed in San Diego at midnight the same day. In many ways San Diego is the ideal town: the airport is practically within walking distance from the city (you're so close as you fly in the downtown skyscrapers fill the entire window view), the city is walkable, lots of great Italian coffee shops, great weather, awesome sushi places. And did I mention the coffee? All they need now is a baseball team, and they're all set...

It's a long way to come for one bird and miss. I'm nervous - this is my first rarity chase where I've got on a plane for just one bird. I can barely sleep. When I do get up, I'm still nervous. I'm counting on the bird following its tidal schedule, so have enough time to enjoy breakfast before driving down to the bay. When I arrive at the end of 7th street, I notice lots of birders (good)... 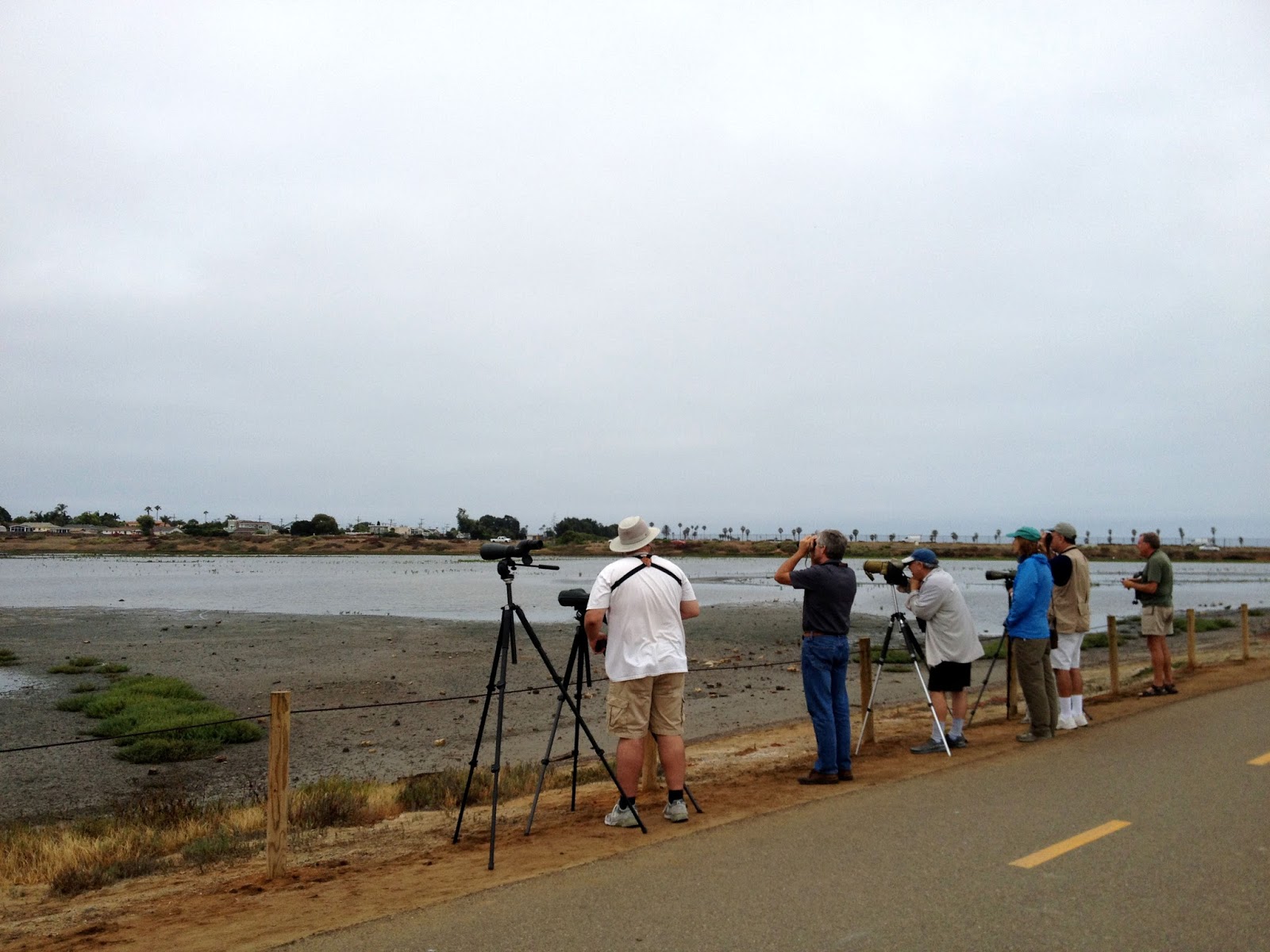 ...who are chatting and clearly not looking at a major rarity (hmm..not so good.)

While we wait for the bird to (hopefully) appear, there's lots to look at... 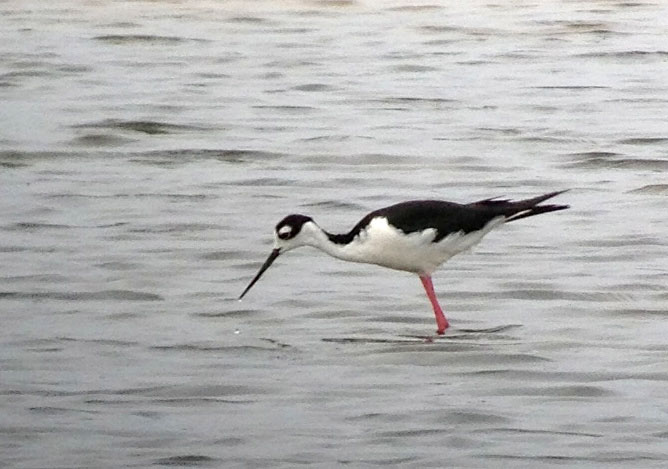 Black-necked Stilt - an Oh Wow! bird.
A common bird here that's not so common back home.

and my first Belding's Sparrow of the year - a very dark subspecies of the Savannah Sparrow that's found in coastal Southern California... 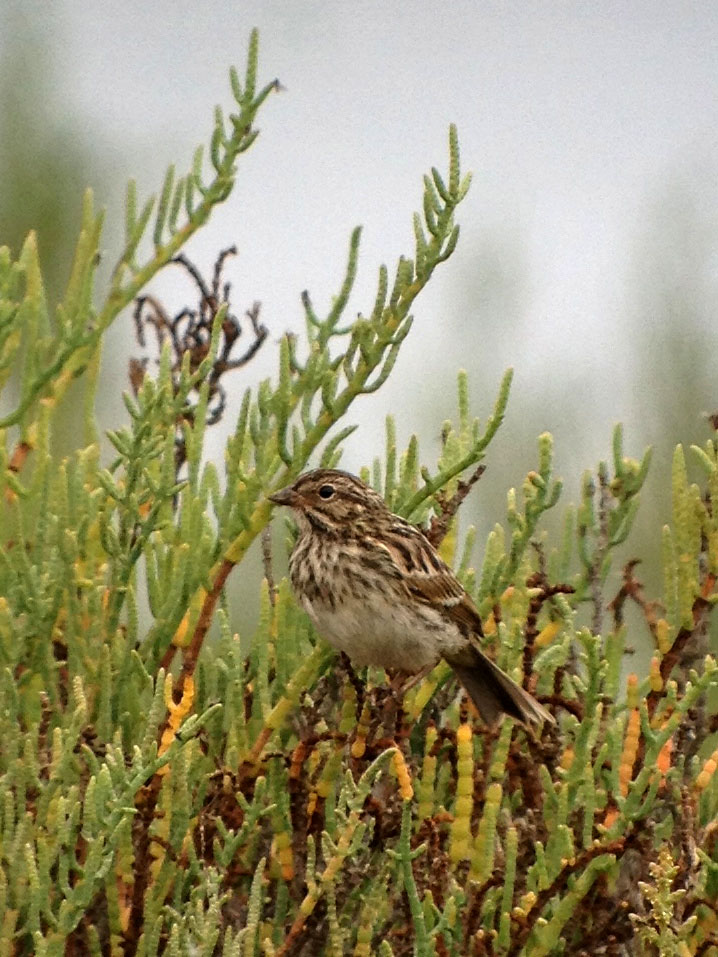 and Reddish Egret - always a fun bird to watch... 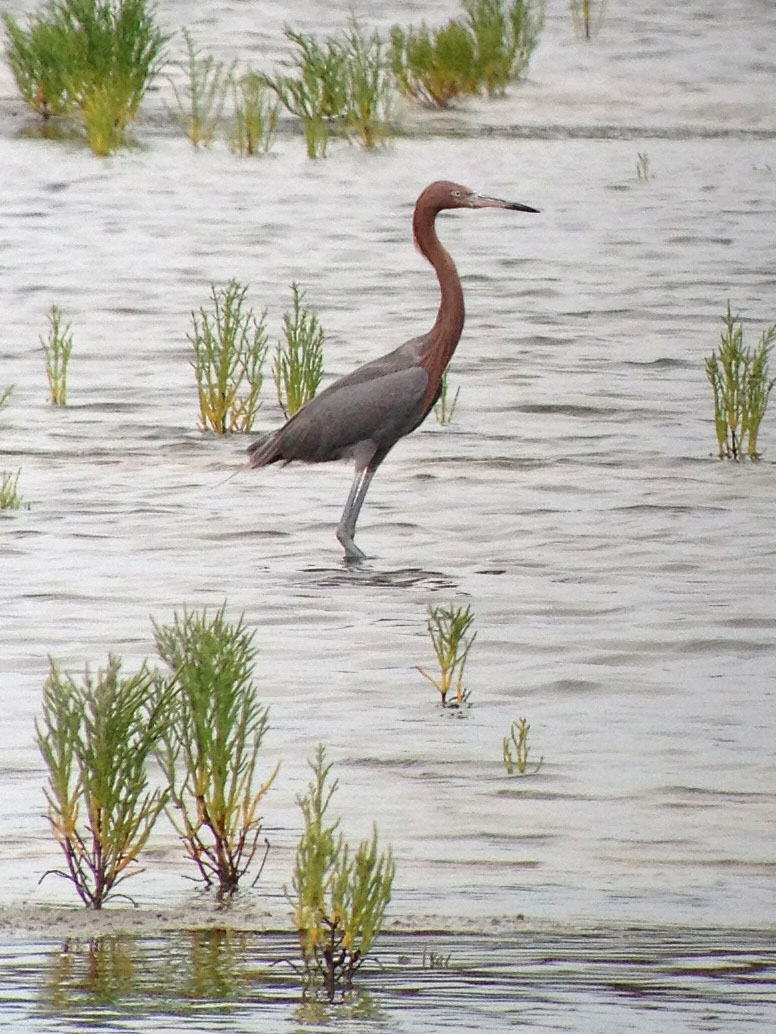 As I'm scanning through the many Semi-palmated Plovers, I hear a shout from the guy next to me, "I've got it. It's flying. Here it comes!" And with that, a brightly-colored plover plops down amid the slightly smaller resident plovers. It's the bird alright - the Lesser Sand-plover... 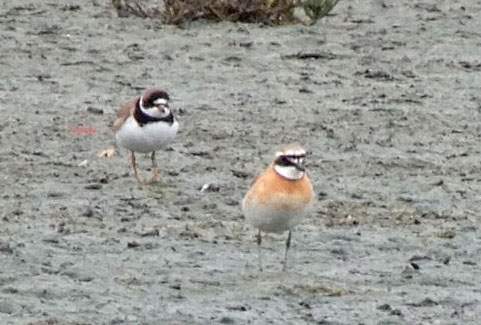 Not too hard to pick out - Lesser Sand-plover (foreground)
with Semi-palmated Plover (background.)

It's an active bird: as soon as it lands, it's running around the mud, looking for food... 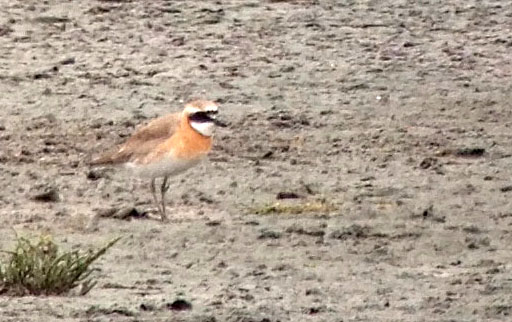 Lesser Sand-plover. Bright orange breast, white throat and black face mask.
The sand-colored back really blends in with the mud.

These Sand-plovers breed in Asia - especially above the tree line of the Himalayas. This bird is presumably of the larger eastern subspecies, often called the Mongolian Plover. It's a great little bird (I love shorebirds!) and definitely worth the hassle to get here. Phew!

I'm flying out tomorrow morning so have rest of the day free. Wow - I have some free time! I decide not to update my blog - not knowing at the time that I'll be so busy birding that I won't have time for another week to actually write any of this up - and instead go birding...

This is apparently a good year for Black-vented Shearwaters. This is a bird that turns up in Southern California in the late summer and fall, and can often be seen from shore. I head up to La Jolla - which has a great headland for seawatching - to try. 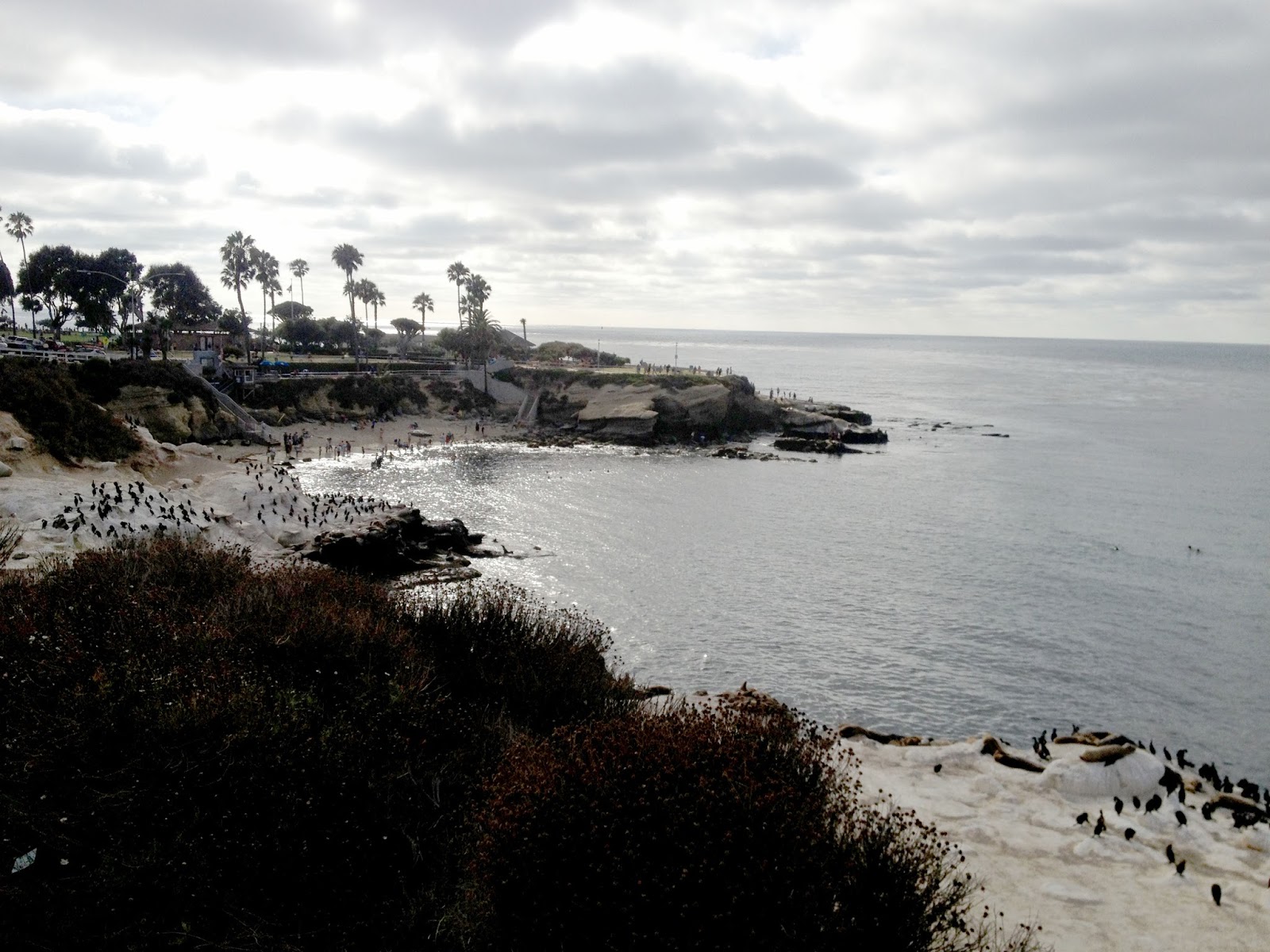 The cliffs at La Jolla are smelly - not from the terrible traffic (which really is terrible here) - but from the belching sea lions. Cute to look at, less cute to smell. I set up my scope, and soon start seeing distant shearwaters. They're so far out, all I can make out is the silhouette. Eventually, some come closer into the bay, and I can see the alternating black / brown above and white below and dark under tail. Black-vented Shearwaters.

Ignoring my better judgement to head back to San Diego and get some much-needed rest, I head up to the Torrey Pines reserve to try again for California Thrasher, which I've kept missing. And today, I do a great job of continuing to miss it.

I'm staying at a motel about 300 feet from the car rental shuttle which is about the same distance vertically from the planes that are coming into land right over the motel. But I don't have any problems falling asleep. This time, when I wake up, I'm *finally* going home!