THE SNOW BIRDS OF NOME

The difference between a Big Year and Medium Year is going to places like Nome. For one bird. In the winter. (Arguably, it's also the distinction between a sane birder and crazy one.) It's my fourth time to Nome this year - a tiny outpost on the west coast of Alaska, accessible only by plane (or boat.) Last week it was -2F here. I'll let you decide how crazy that makes me.

Oh, and the bird? The McKay's Bunting. A close relative of the Snow Bunting, it nests on just two remote islands in the Bering Sea - St. Matthew Island and its smaller satellite, Hall Island. Uninhabited, and accessible only by boat, these islands lie between the Pribilofs to the south and St. Lawrence Island (Gambell) to the north. Thankfully, the birds winter on the western coast of Alaska, where they're slightly more accessible. But with a global population of only 6,000 birds, they're never very common.

It's a beautiful morning as I leave Anchorage. I've seen the city and surrounding landscape change through this year, during my 6 visits and 50 days in Alaska. And with ice floating in the Cook Inlet, framed by snow-clad mountains, I think this may be the most beautiful time to be here. 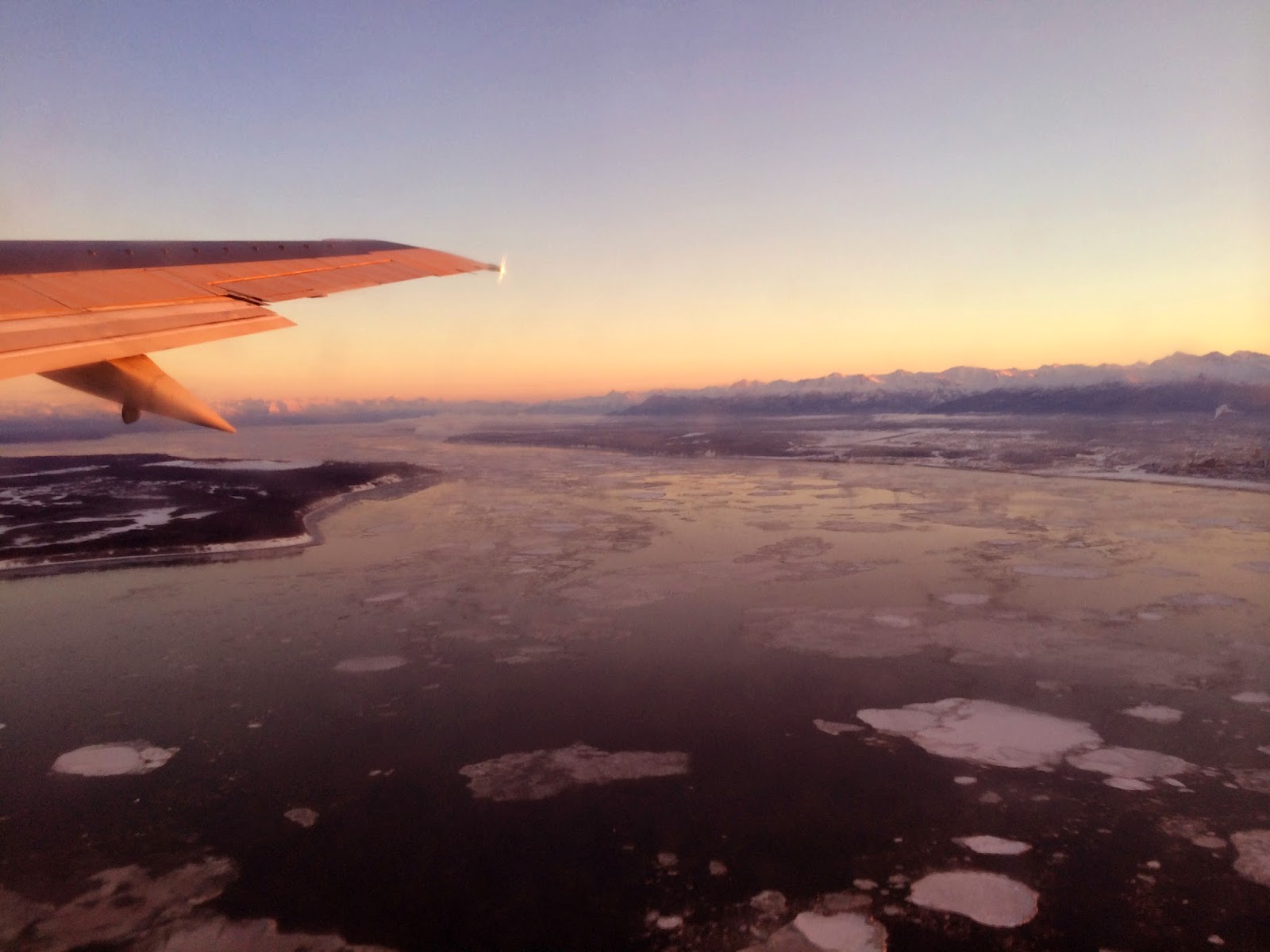 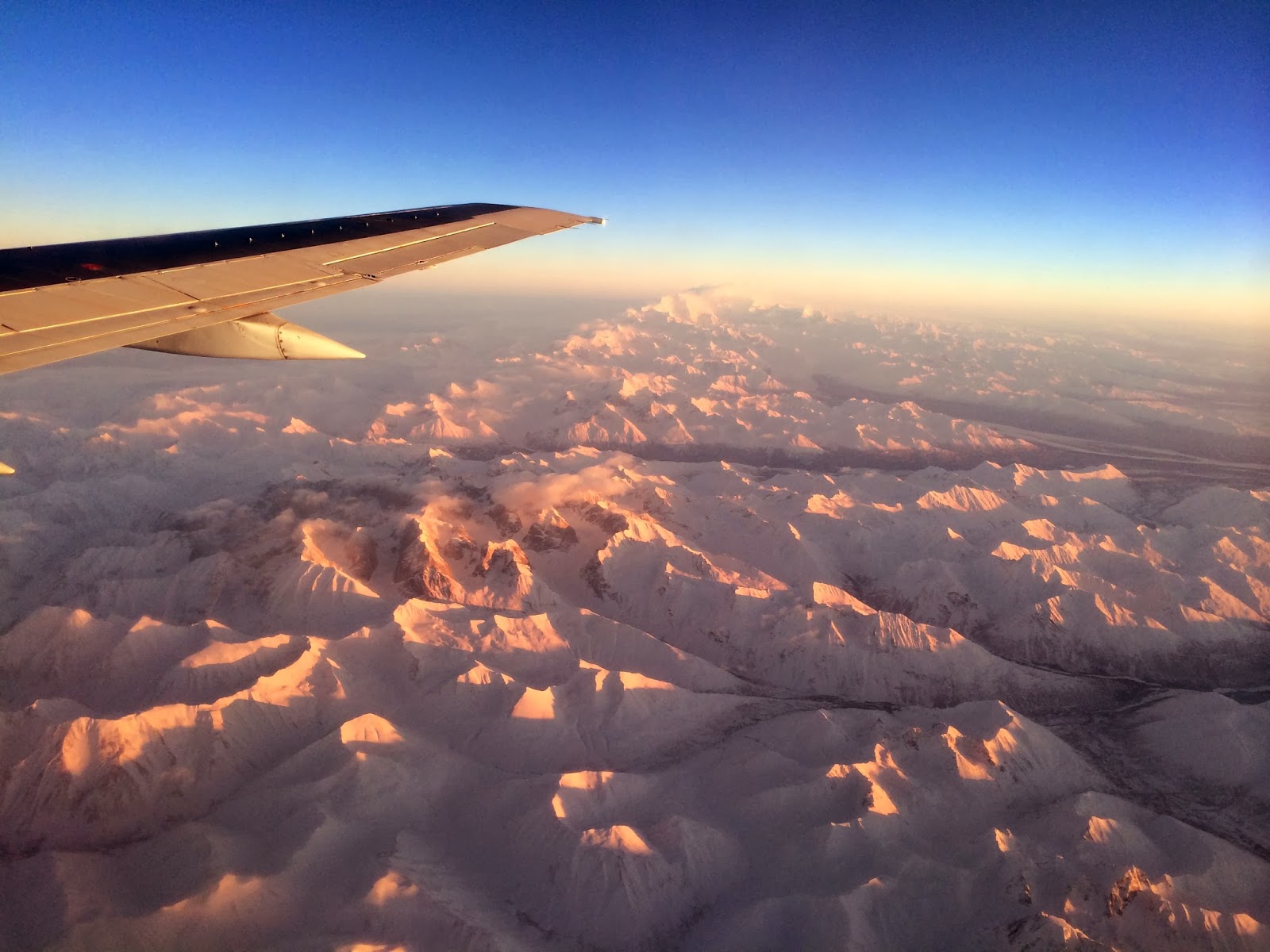 I arrive in Nome at 11:30am - just as the sun is rising. I never see the sun though - it's low and hidden behind the leaden and cloudy sky. It reminds me of Barrow on the north coast, which by now is in its long sun-less winter.

Snow came late to Nome this year - which also delayed the arrival of the buntings. And so, as I entered town, I was happy to see the place blanketed in snow. Walking round Nome brought back happy memories of the spring - birding with Hans de Grys and Abe Borker and his father. It brought a smile to my face thinking of the fun we had here - some of the most treasured memories I have of this year. 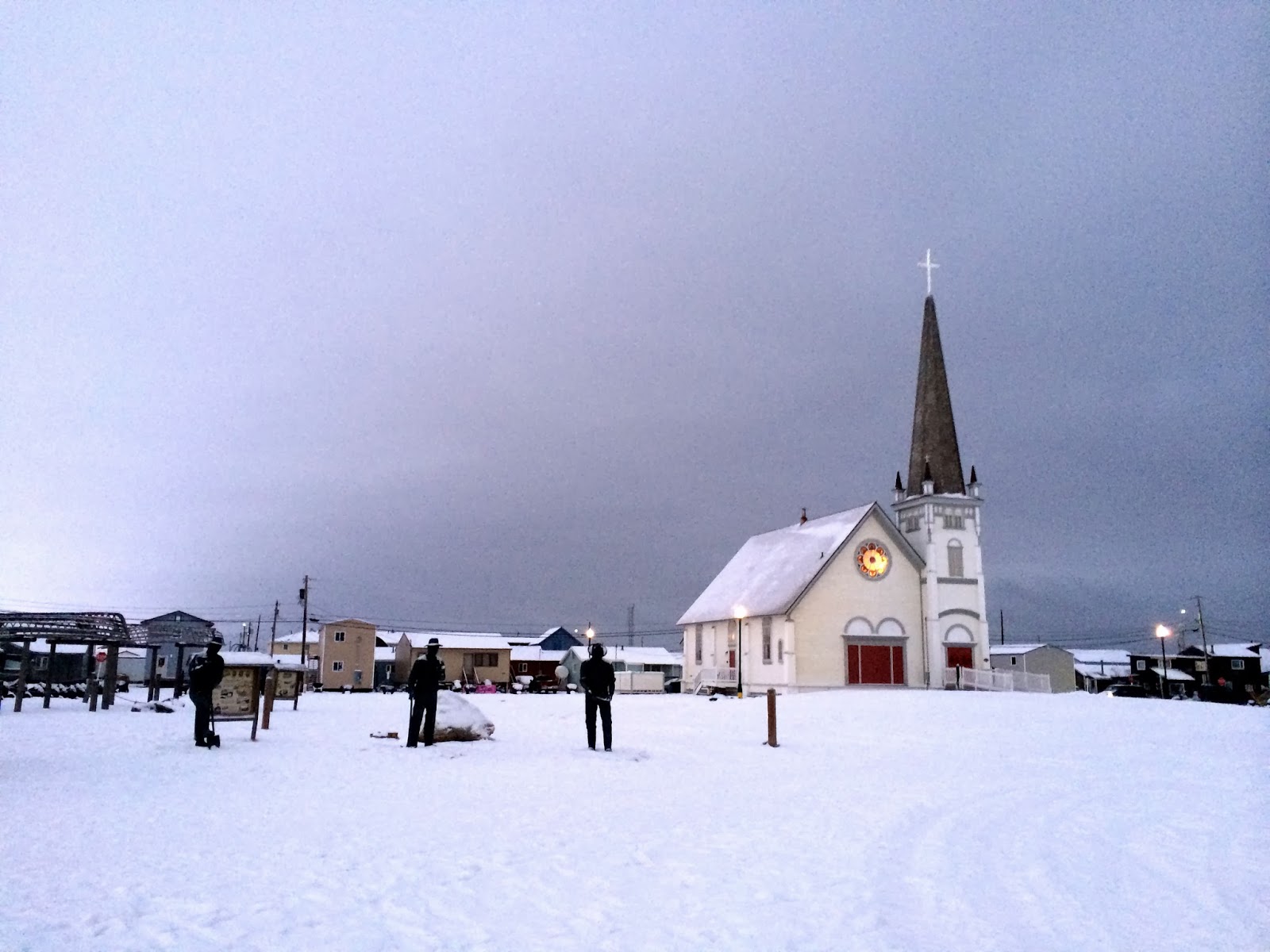 The McKay's Buntings have been most reliable at Icy View Subdivision - a small residential area about a mile out of town. It's surrounded by grassy tundra which attracts the Buntings - both McKay's and Snow Buntings. And apparently some of the homeowners put out seed to attract the birds.

I take a cab from the airport out to Icy View. It's a loose collection of about 100 houses... 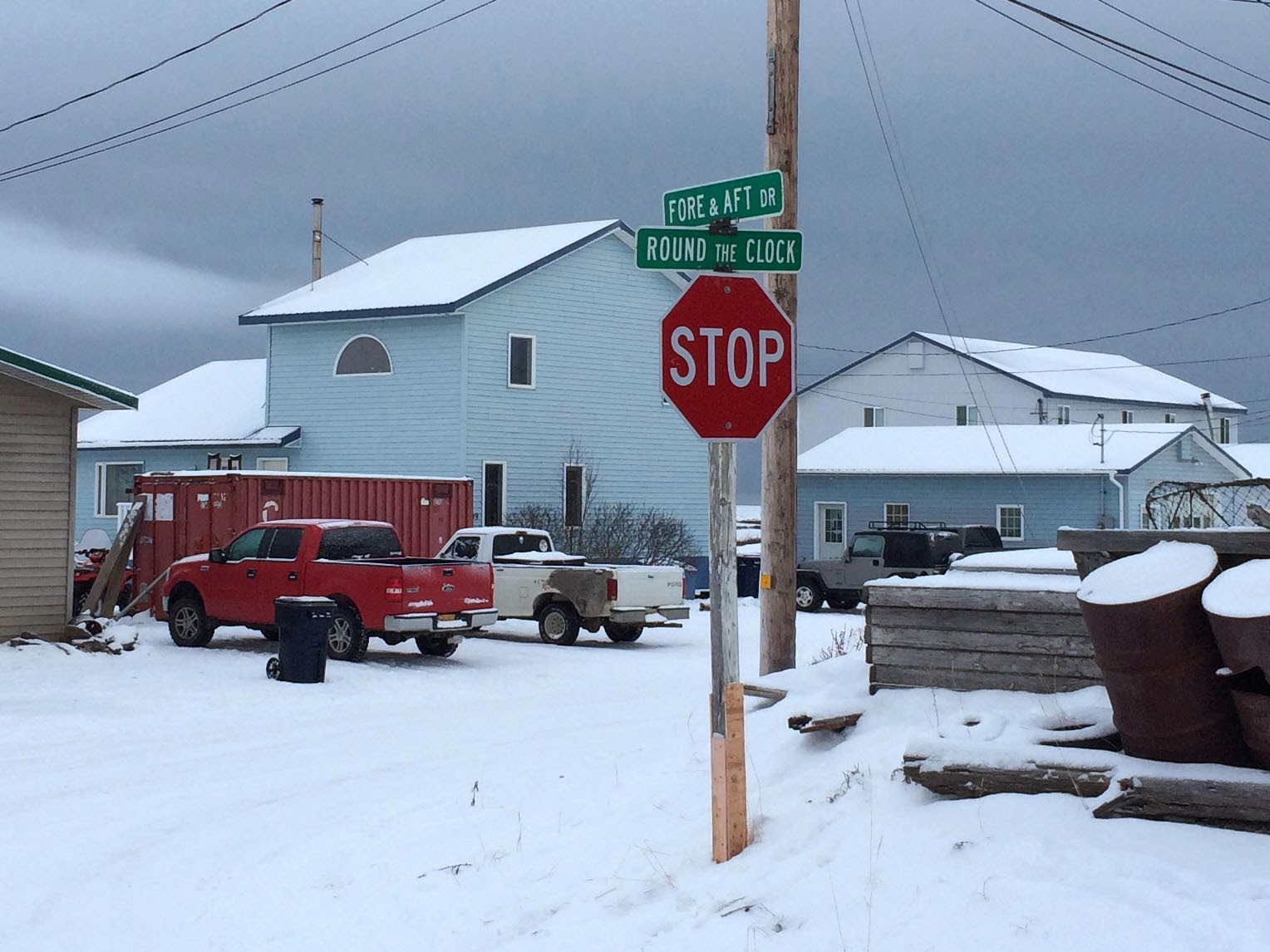 Icy View Subdivision.
At the corner of Fore and Aft Drive, and Round the Clock St. 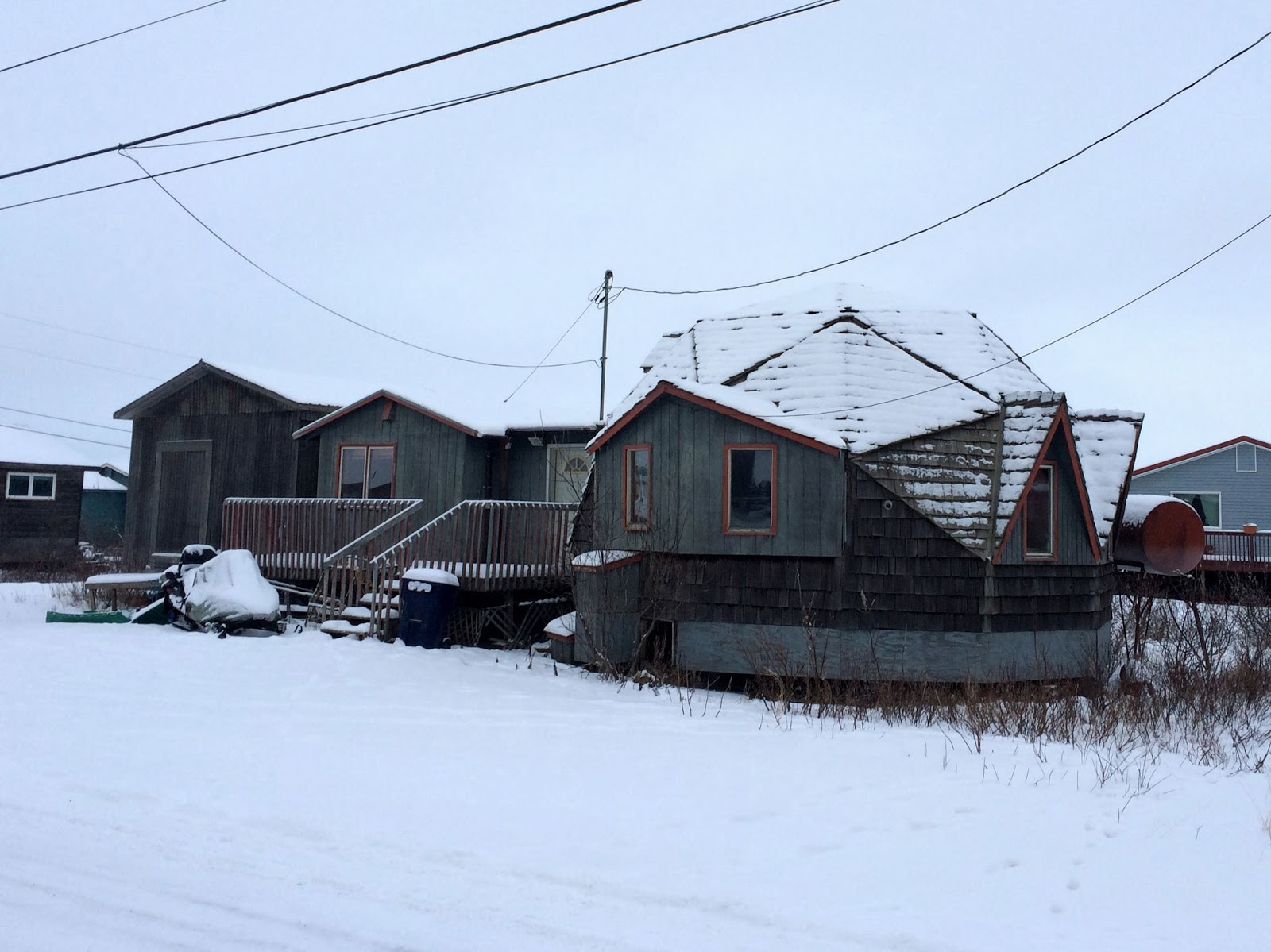 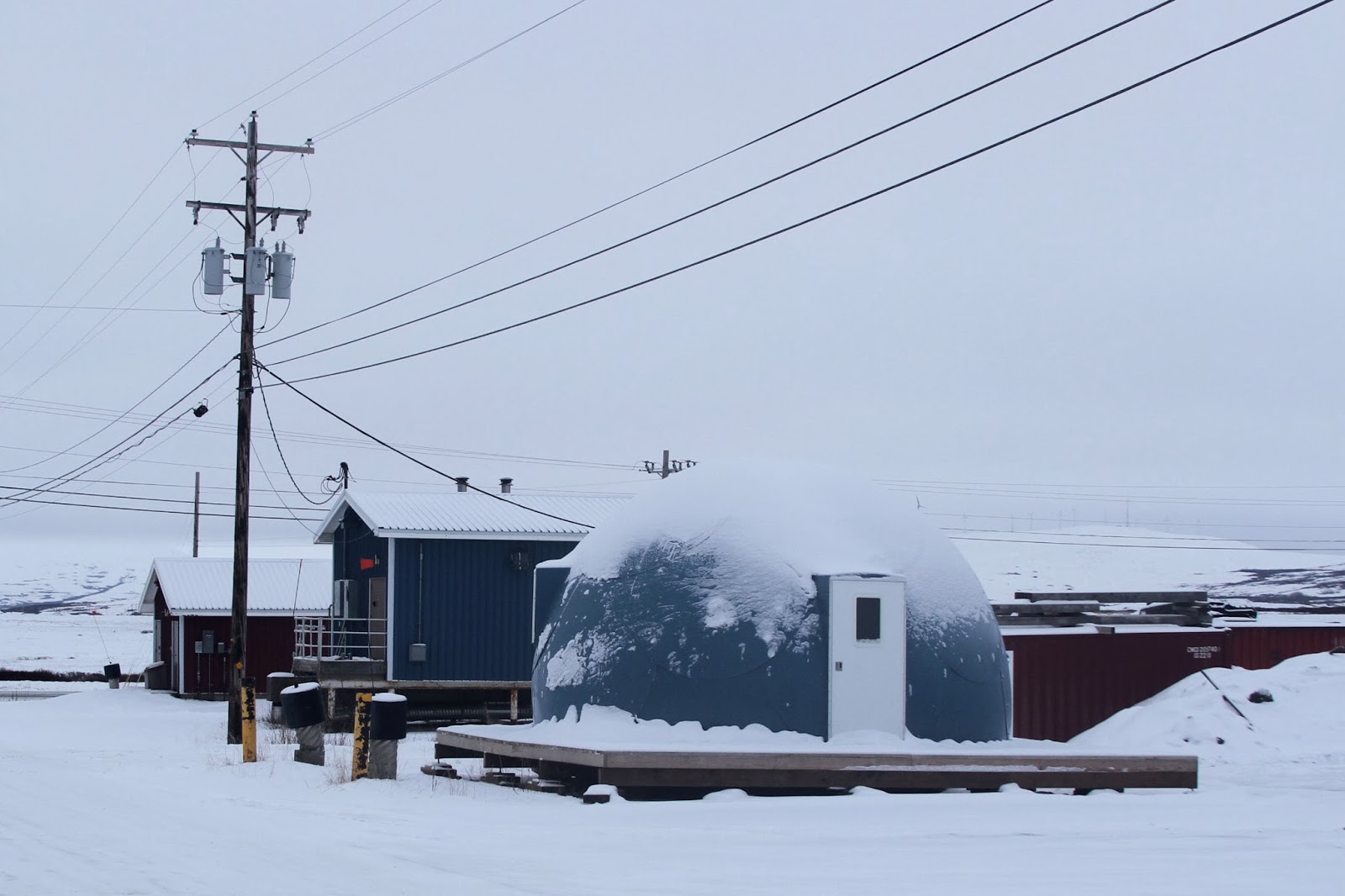 ...and others that don't look much like houses at all... 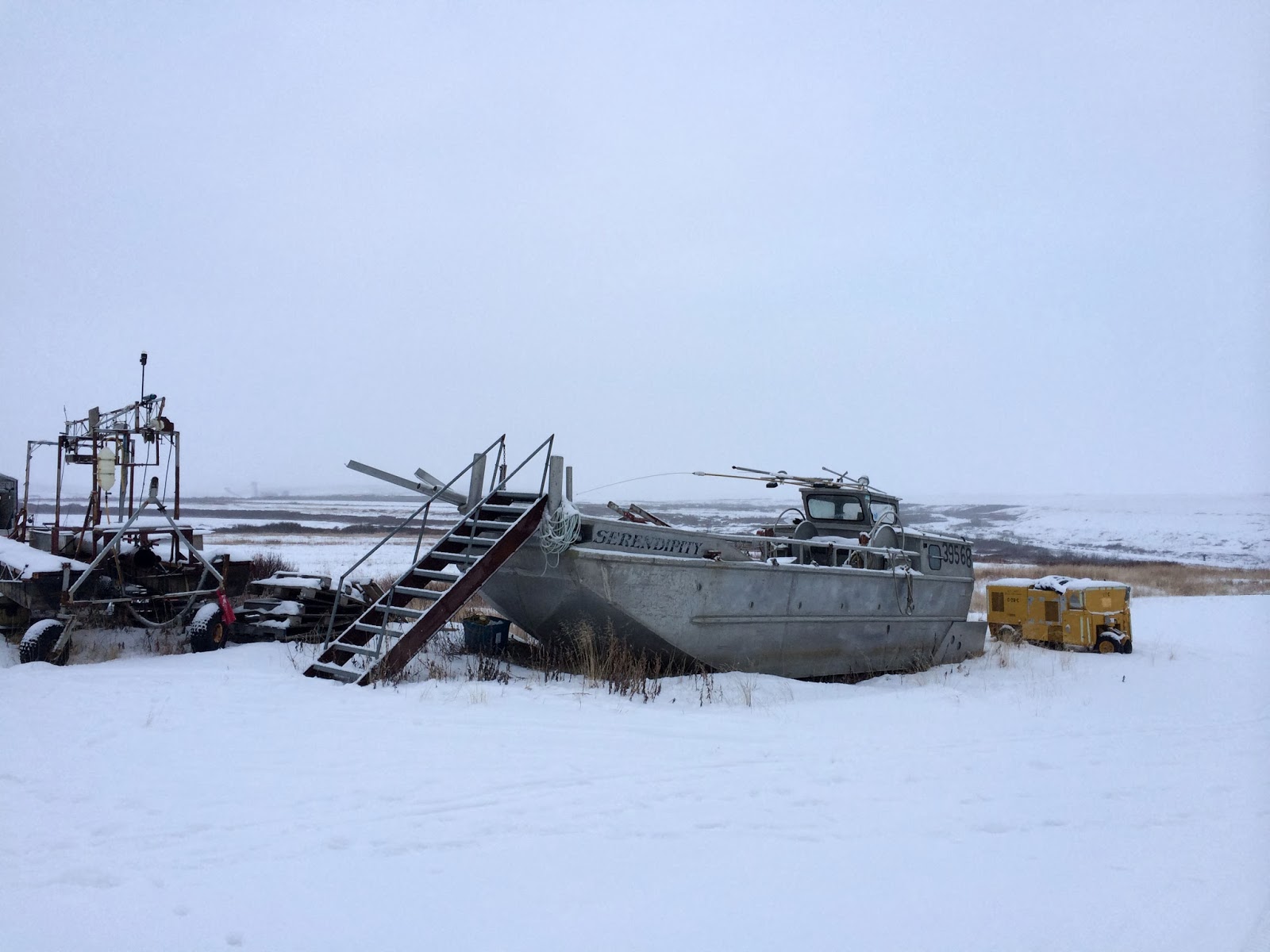 I walk around looking for birds. Apart from the omnipresent Ravens, there aren't any. It's cold, windy and it's started to snow. After an hour, I'm exhausted. I haven't seen any white birds, and there don't appear to be any feeders. I start rethinking my plan - maybe I should have brought birdseed? Maybe I'm too early and should have come later in the year? Maybe...and then my search image whizzes by - 4 white birds flying over my head! They head out to the grassy tundra and then disappear. My binoculars are covered in too much snow to get a good view of the birds flying away. But they looked almost entirely white to me. McKay's?

And then I notice a tiny pile of seed husks outside one of the houses - that's probably where the birds flushed from. Someone is feeding the birds. Or rather did - there doesn't look like much left. I move to the other side of the road, and wait - hoping for the birds to return. The first thing to return is the homeowner, looking slightly confused at this guy standing outside his house, in the cold snow, with a telescope.

"Are you looking for the snow birds?"


Yes! I reply. Snow birds are what the locals call the buntings and most people here know about these white winter visitors. Once we've broken the metaphorical ice, he tells me that the birds have only just started to appear - and come in one or two times a day. He generously retrieves a bag of bird seed and dumps a good amount on the ground, wishes me luck, and (sensibly) heads inside.

Within 15 minutes the first bird flies in. It's white. It's a Snow Bunting. This is a good practice in identification. The McKay's should have a lot less white in the wing - only at the very tips, and a whitish back. (At this time of year some of the white feathers are edged in brown, but will never be as dark on the back and wings as a Snow Bunting.) 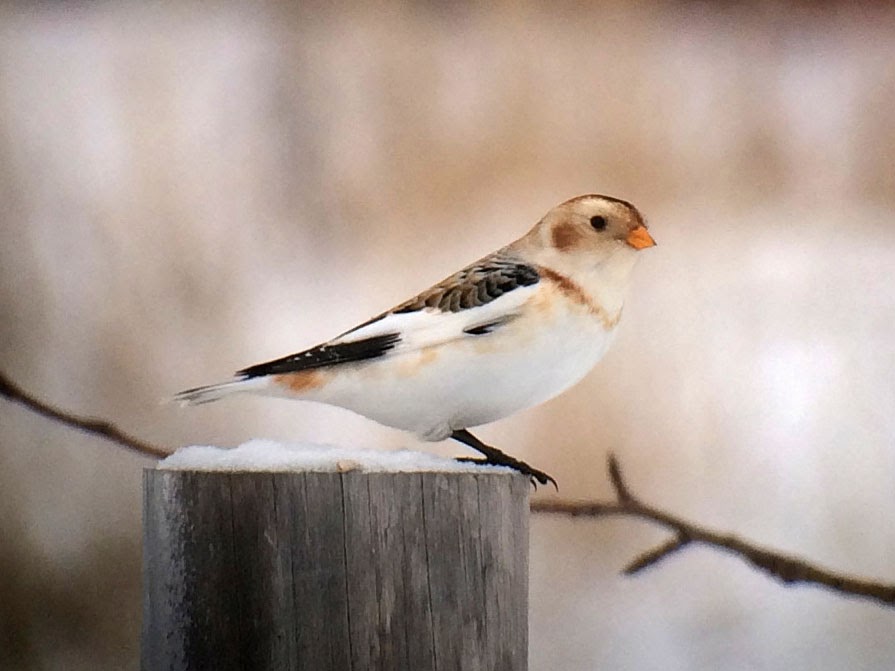 Snow Bunting - notice the large amounts of black
in the folded wings and the dark back.

And 15 minutes later, I hear chirping above me. I look up and the wires are covered in white birds!... 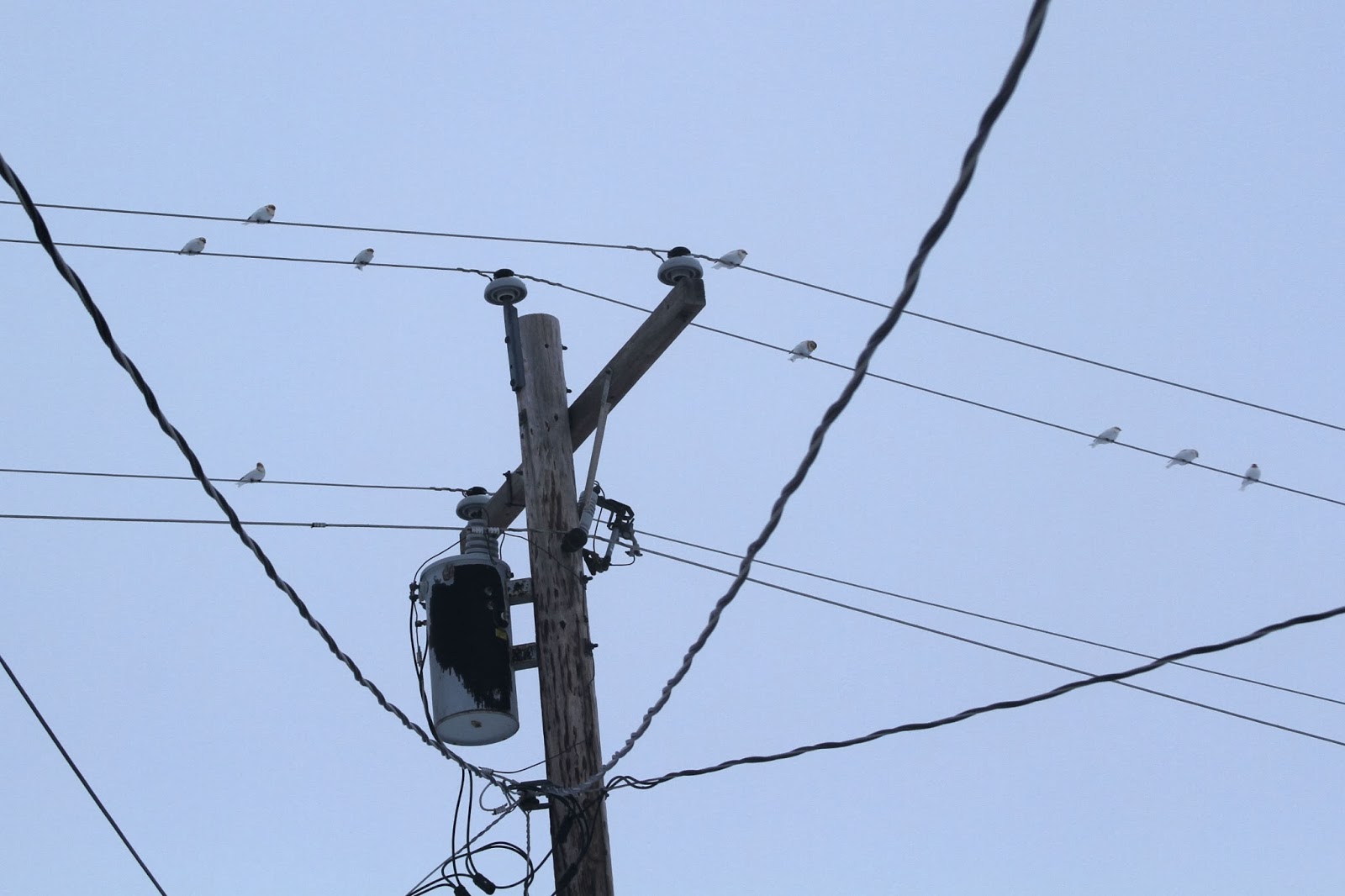 From this view I can clearly see the tails. Snow Buntings have dark central feathers in the tail, whereas McKay's are almost entirely white. These birds have white tails! 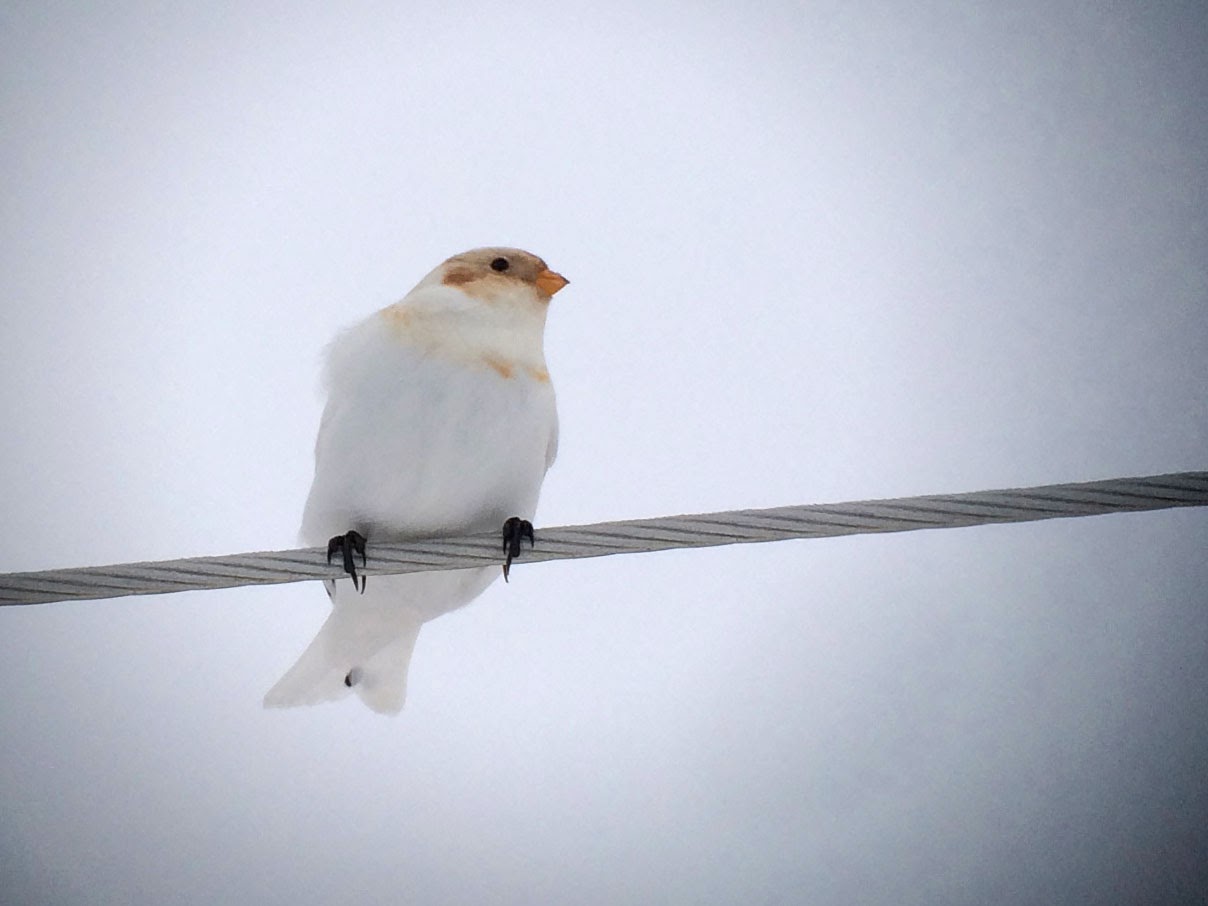 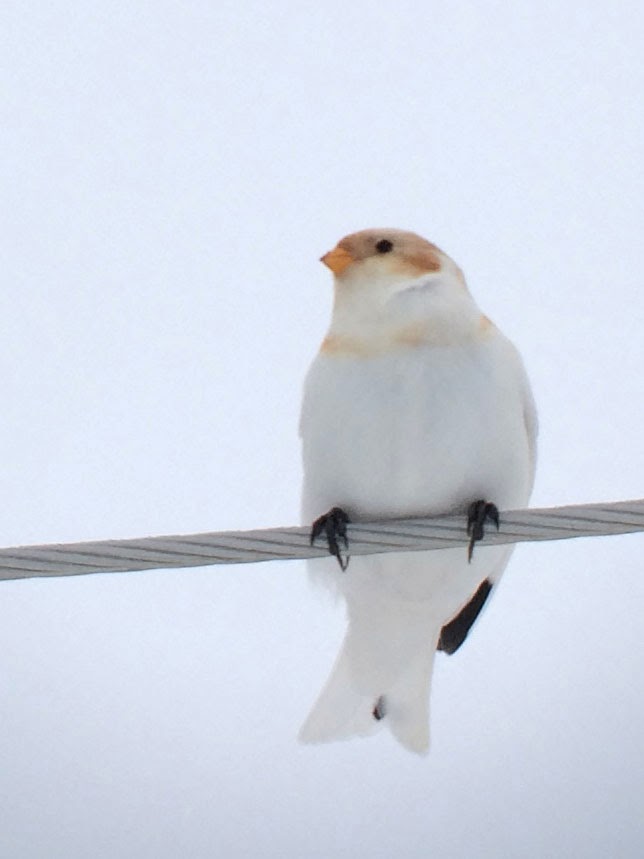 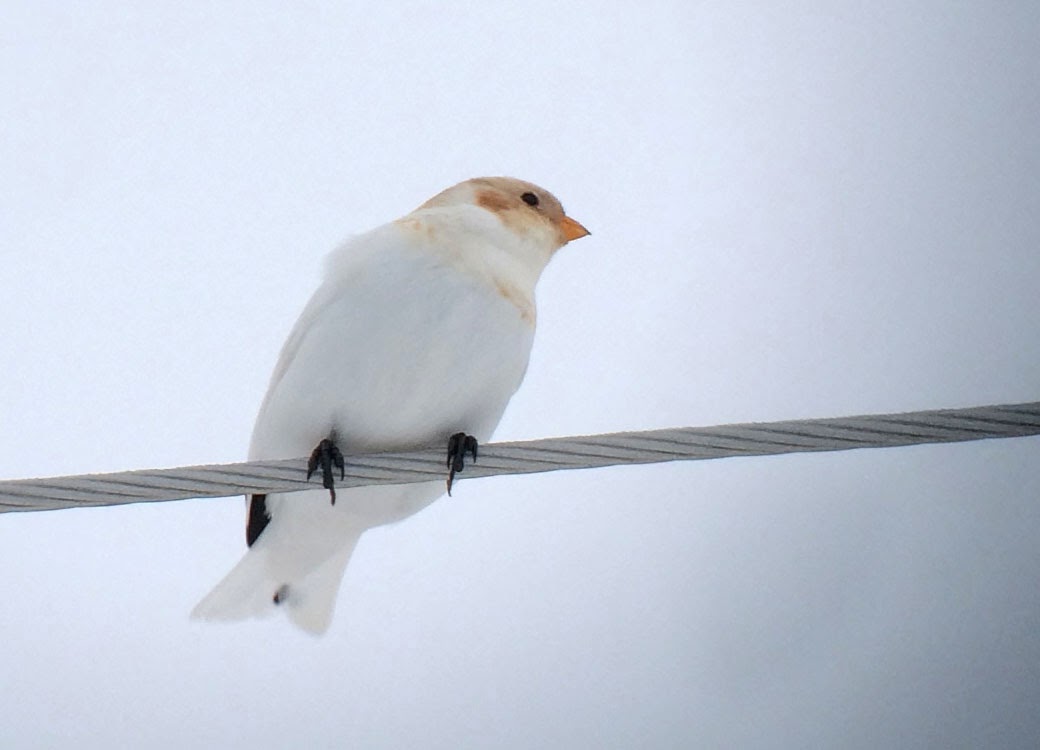 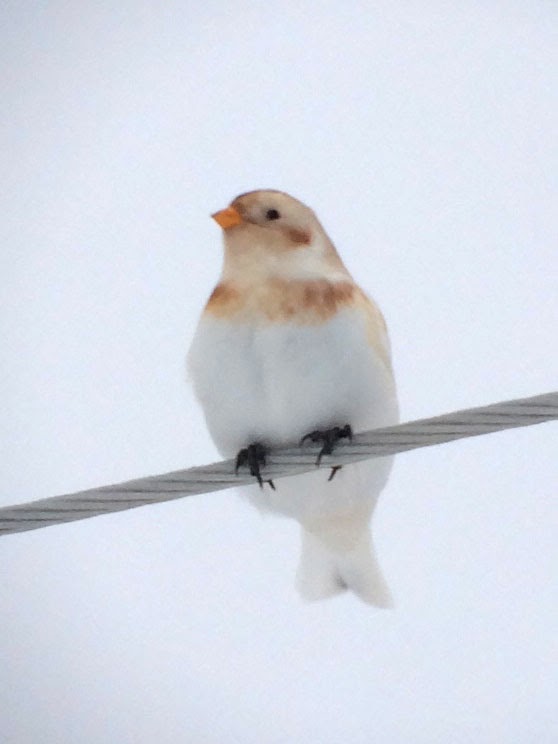 and white tips to the end of the wings... 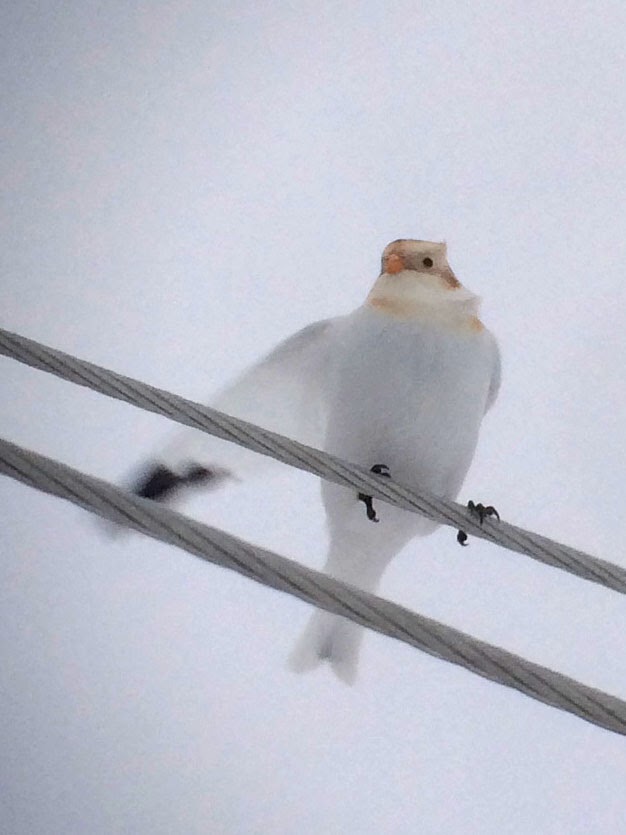 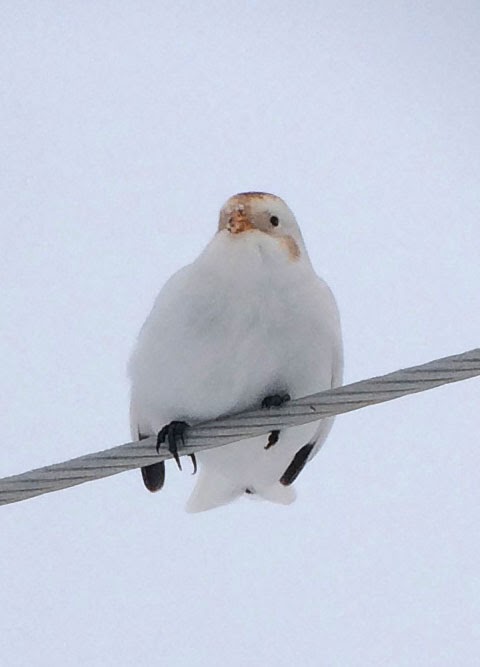 There are at least 12 McKay's and 2 Snow Buntings. Once the birds start feeding on the ground it's easy to spot the difference between the two species: 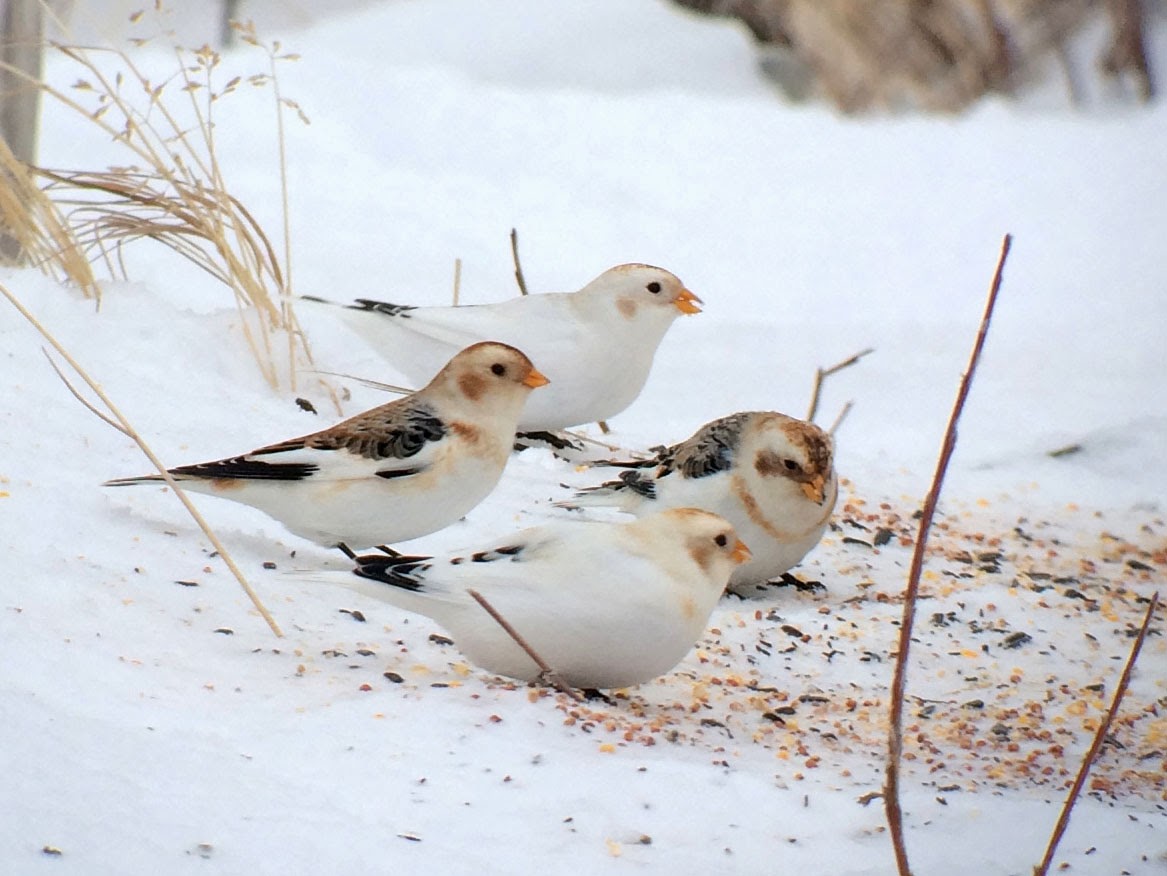 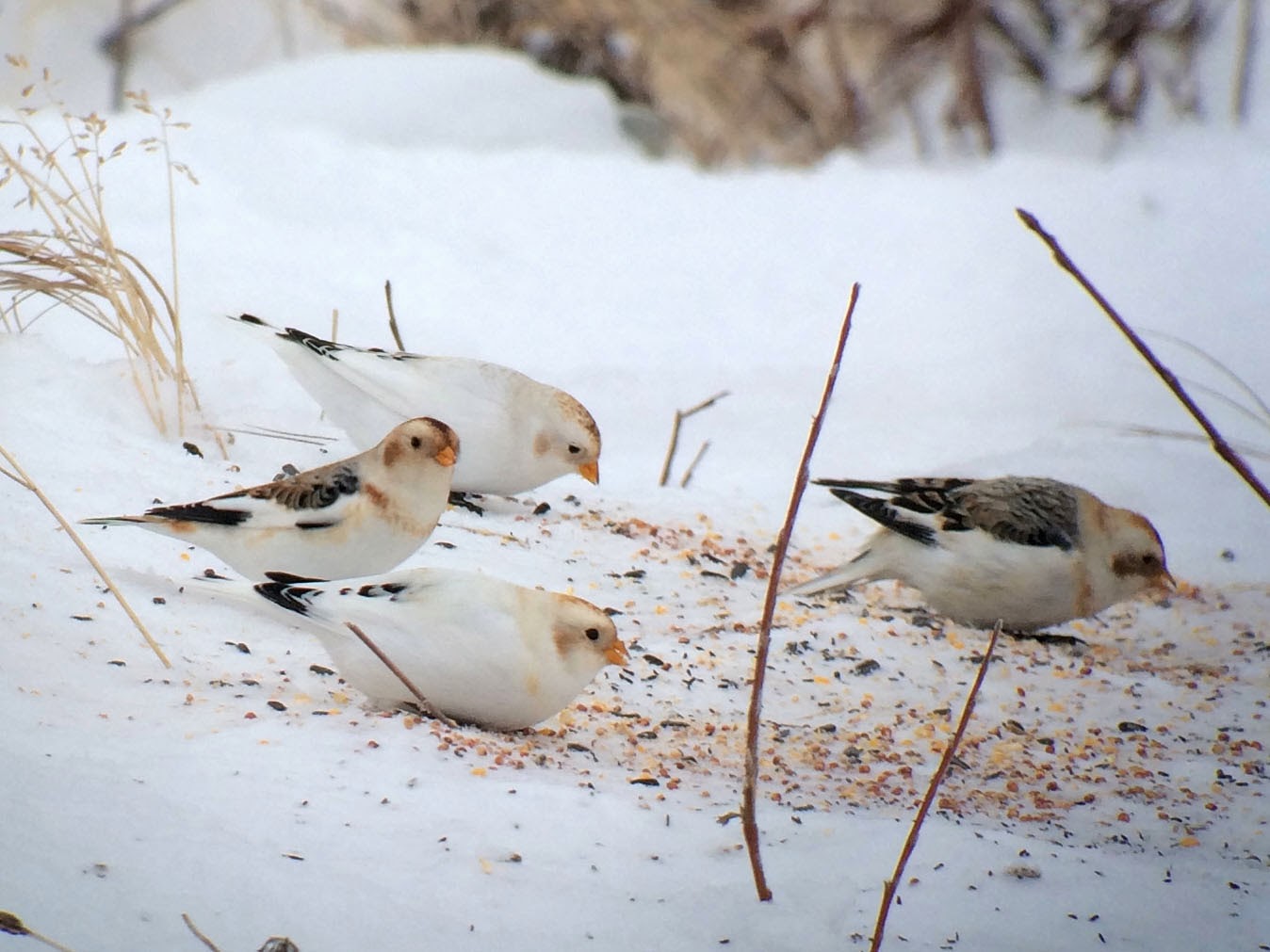 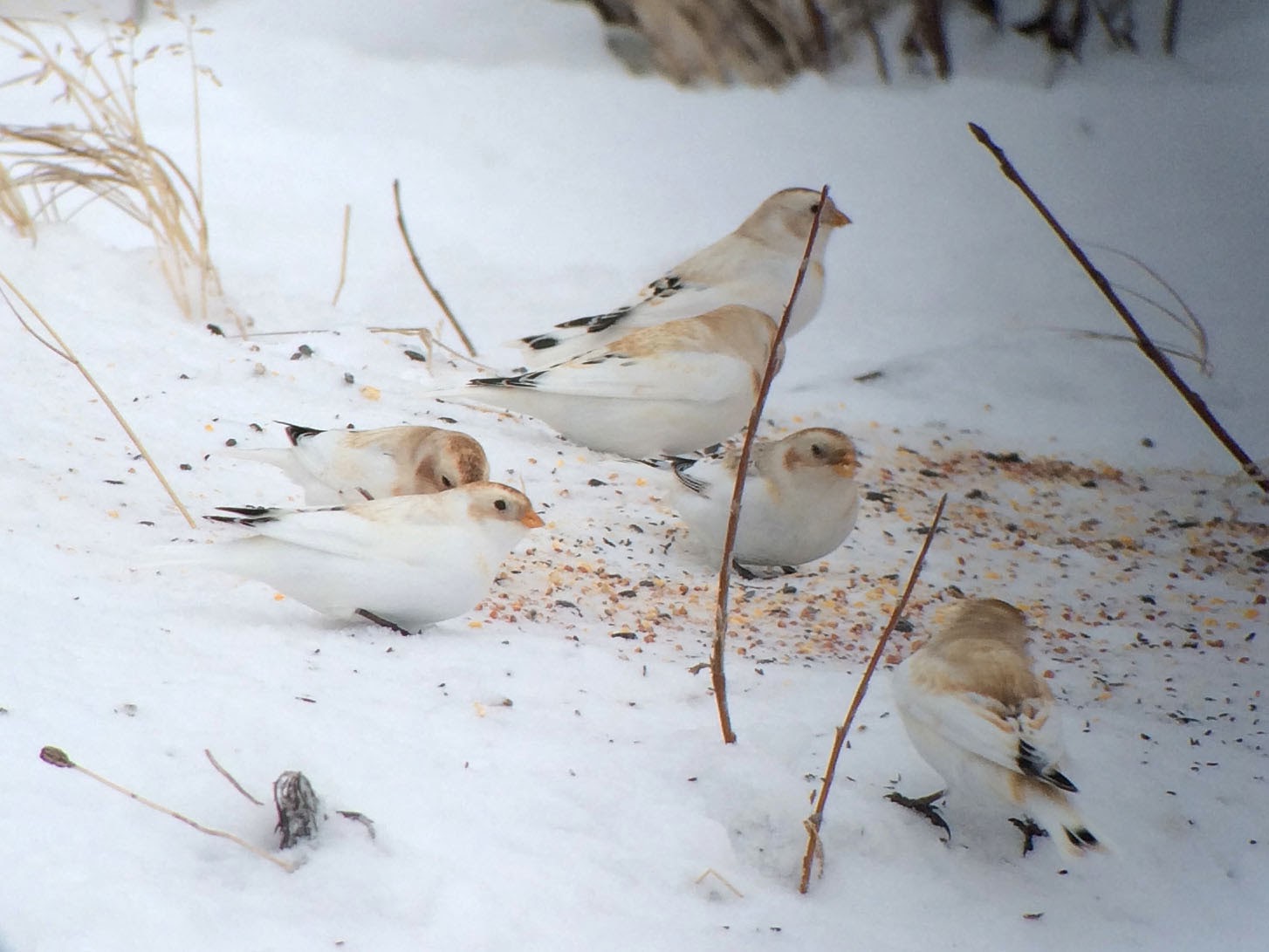 Group of McKay's Buntings. Notice the tiny patch of black in the wings
and tail of the lower right bird. (Snow Buntings have solid dark central tail feathers.)

I watch the birds for about 15 minutes as they busily munch their way through the new seed. Without the patches of black, these birds would disappear into the snow. 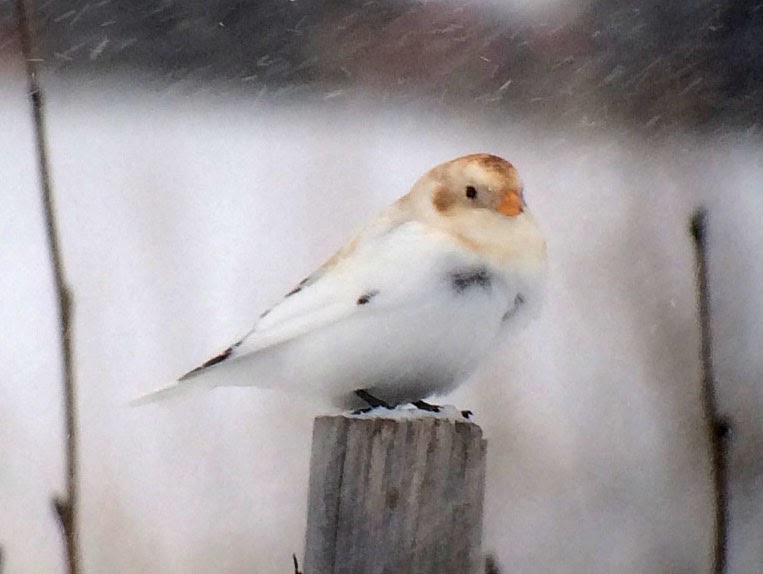 Before leaving (and before the sun sets - not that I ever really saw the sun) I trudged back into town and checked out the harbor. I was surprised it wasn't frozen. 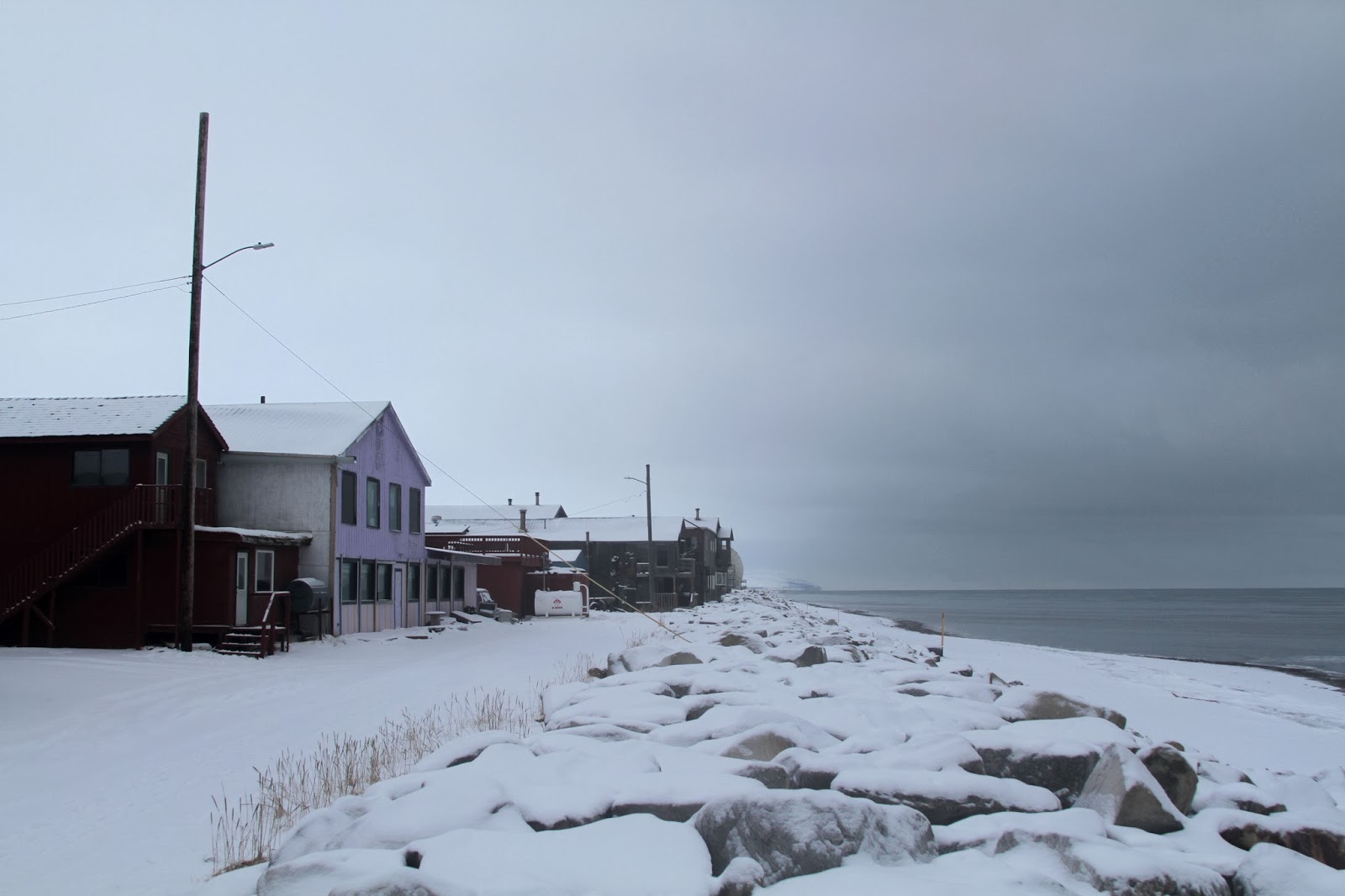 I was hoping for Ivory Gull - but the sea was empty - not a duck, loon or alcid in sight. Just a flat, cold expanse of sea. But a closer look revealed ghostly-white lumps moving through the water - Beluga Whales.

As I sat in the airport, checked-in for my evening flight back to Anchorage, I reflected on a great start to my Alaska trip. Heck - I could even head out to Adak tomorrow (Sunday) rather than Thurs and spend more time out there. I'd already seen both my target birds in mainland Alaska - Dusky Thrush and McKay's Buntings. That puts me, at the end of November, on 738 species + 2 provisionals. That's ahead of the pace John Vanderpoel set in 2011 (he ended the month on 743+1.) And with the long-standing record set by Sandy Komito at 748 (745+3), there was a chance that...

"We regret to inform you that tonight's flight is cancelled."

It never sounds like regret. And when you're in Alaska, cancelled flights are never a surprise. And so my one-day trip to Nome now involves an overnight stay. And my plans for an early and extended trip to Adak are scuppered.

But one thing I've learned this year is that fate throws you curveballs. When one door closes, another opens. An American Flamingo was just located in coastal Texas. Maybe I'd have enough time to leave AK for a few days and swap the white birds for a large pink one?

And besides, if I didn't get to spend the night in Nome, I'd never have known that over-the-top Christmas decorations are not just the specialty of the Lower 48... 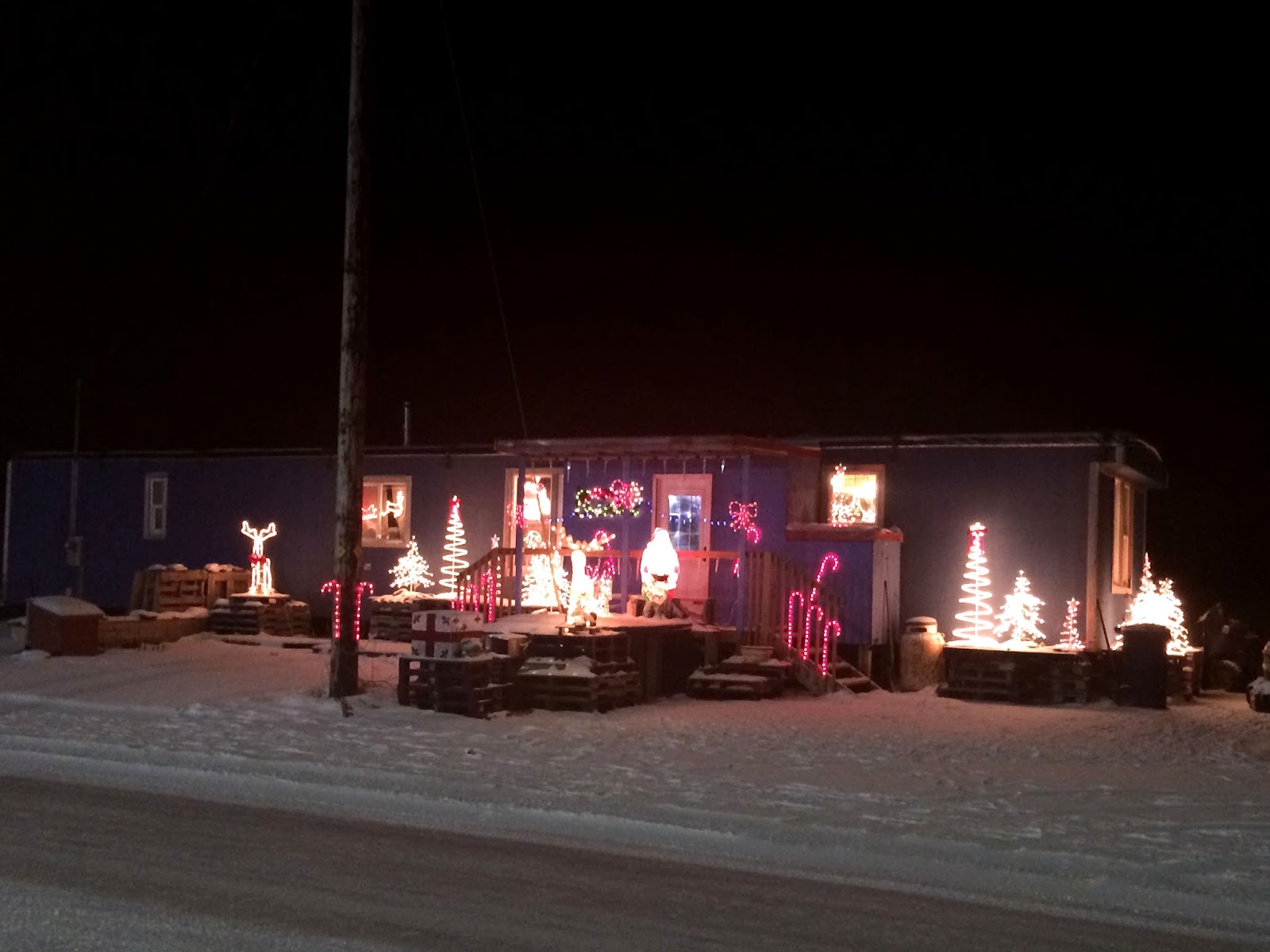