FIRE BIRDS ON THE PLAIN

As I approach the end of my Big Year (yes - this really is going to end soon), I'm chasing down some of the ones that got away. And Sharp-tailed Grouse is definitely one that got away. Several times. I missed them in Colorado, couldn't find them in Wyoming and I'm sure they were hiding behind trees and laughing at me in Minnesota.

Unfortunately, the best places to find these birds are in some of the most difficult places to get to: the remote plains and prairies of the northern Mid-West all the way up into northern Canada. I'd asked for suggestions on where to go for this bird - and got a lot back: from the Upper Peninsula of Michigan to the interior of Alaska and back down to Montana and the western Dakotas. It was clear wherever I went, it was going to be a trek.

In the end, North Dakota won - specifically Grand Forks. It won because it's *only* a 5 hour drive from Minneapolis, I hadn't been to North Dakota this year (new birding state!) and I'd get to drive through Fargo (yes, I know - the movie was filmed in MN, but still.) But mainly because a local birder, David Lambeth, all but guaranteed that I'd see them here (yeah - I know, I've had a lot of birds guaranteed this year, not all of which ended up on my list!)

It took a whole day to get here, starting early enough from Boston that I saw the sun rise for my connection in Philly... 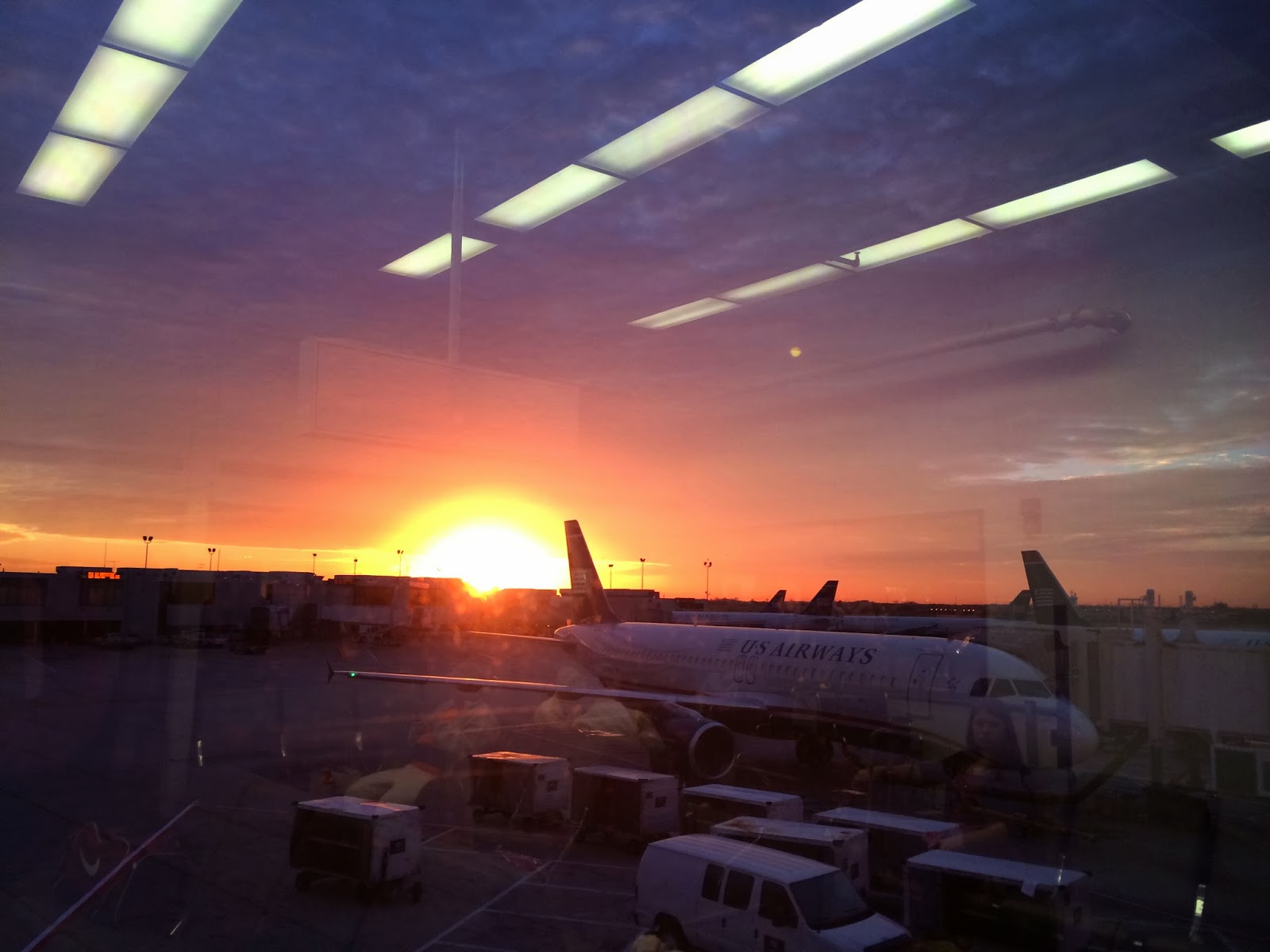 followed by a 5 hour drive from Minnesota, through Fargo... 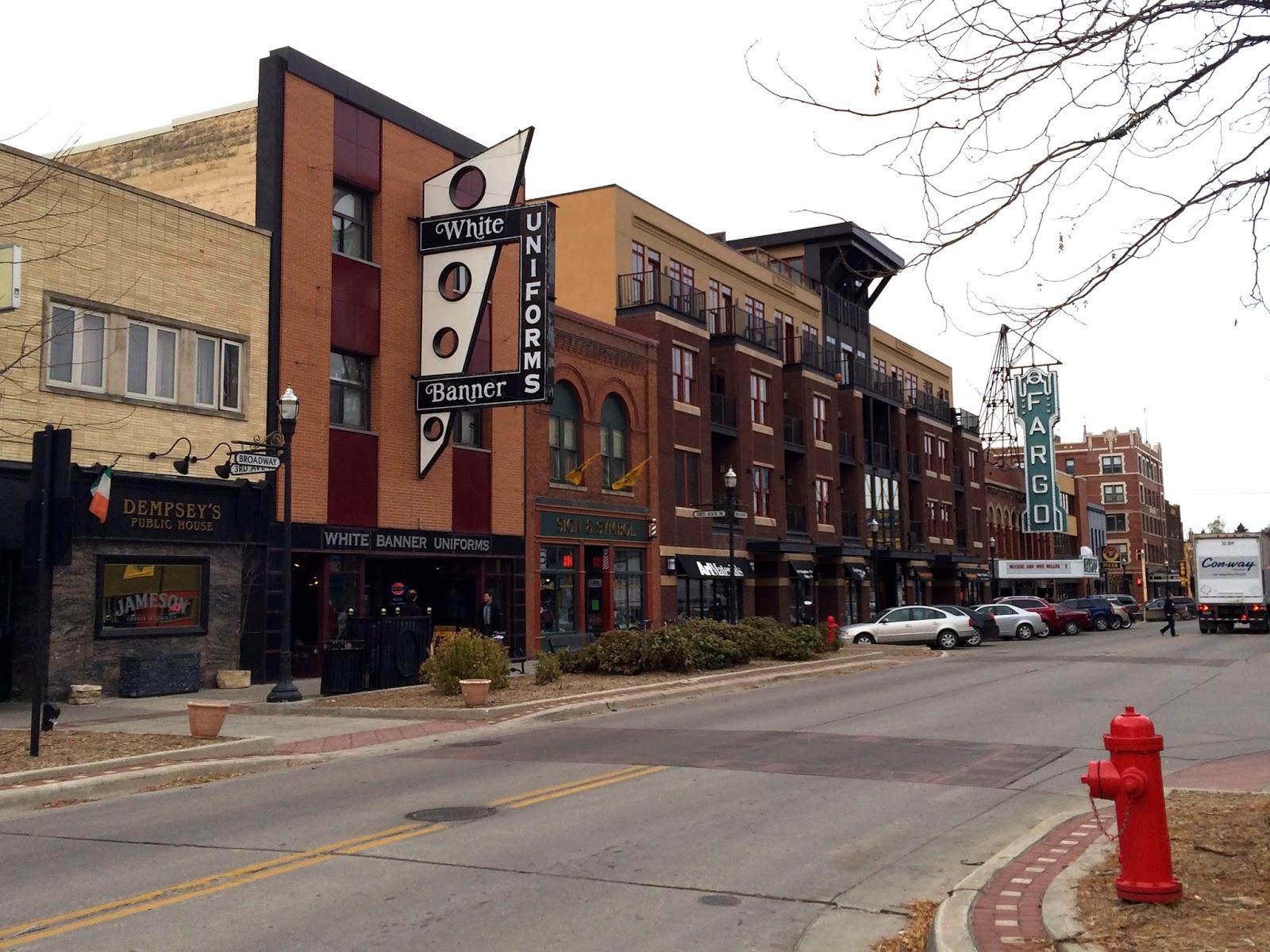 and arriving at Grand Forks in time to see the sun set... 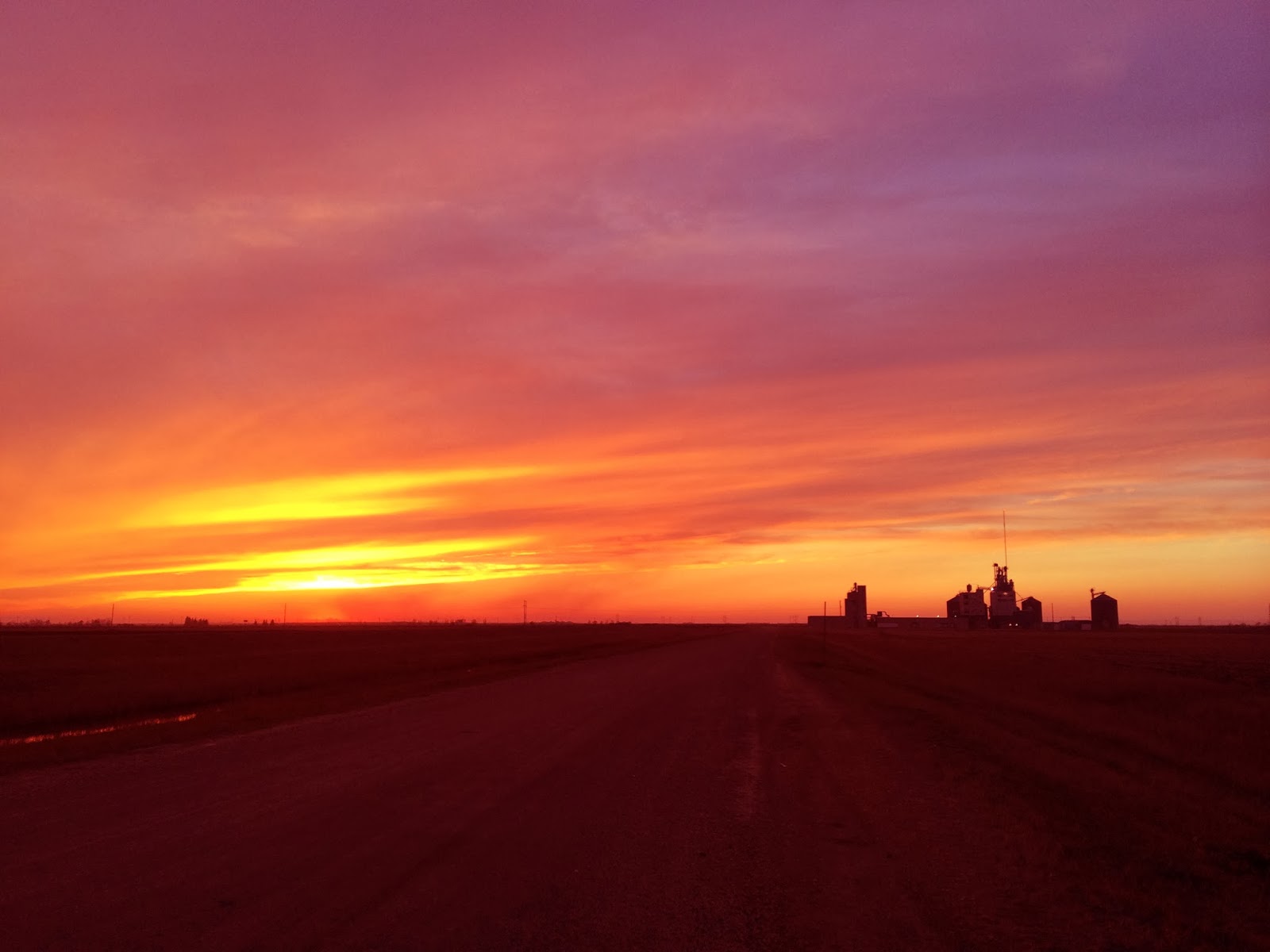 Yes - the sunsets really are this amazing.
(It helps when you have this much sky.)

Sharp-tailed Grouse like open grasslands and were known to the Native Americans as "fire birds" or "fire grouse" due to their reliance on fire to keep their habitat open. And like many species in this family, they're social. The males come together each spring to dance at a lek, where they hope to impress a female. And the dancing is pretty impressive - with lots of foot-stomping (up to 20 times per second!), tail-rattling and moving back and forth, or turning in circles. Add in the purple inflatable neck sacs, and it's hard to imagine how any female could resist! At this time of year though, when they're not on the leks, and their purple sacs aren't doing much inflating, they're harder to find. Which means, it's back to the basic grouse strategy: driving around and hoping to randomly run into them. Which was pretty much the plan for this morning.

I met David as the sun was rising. We headed out to the west of the city, into the cold and frosty plains. 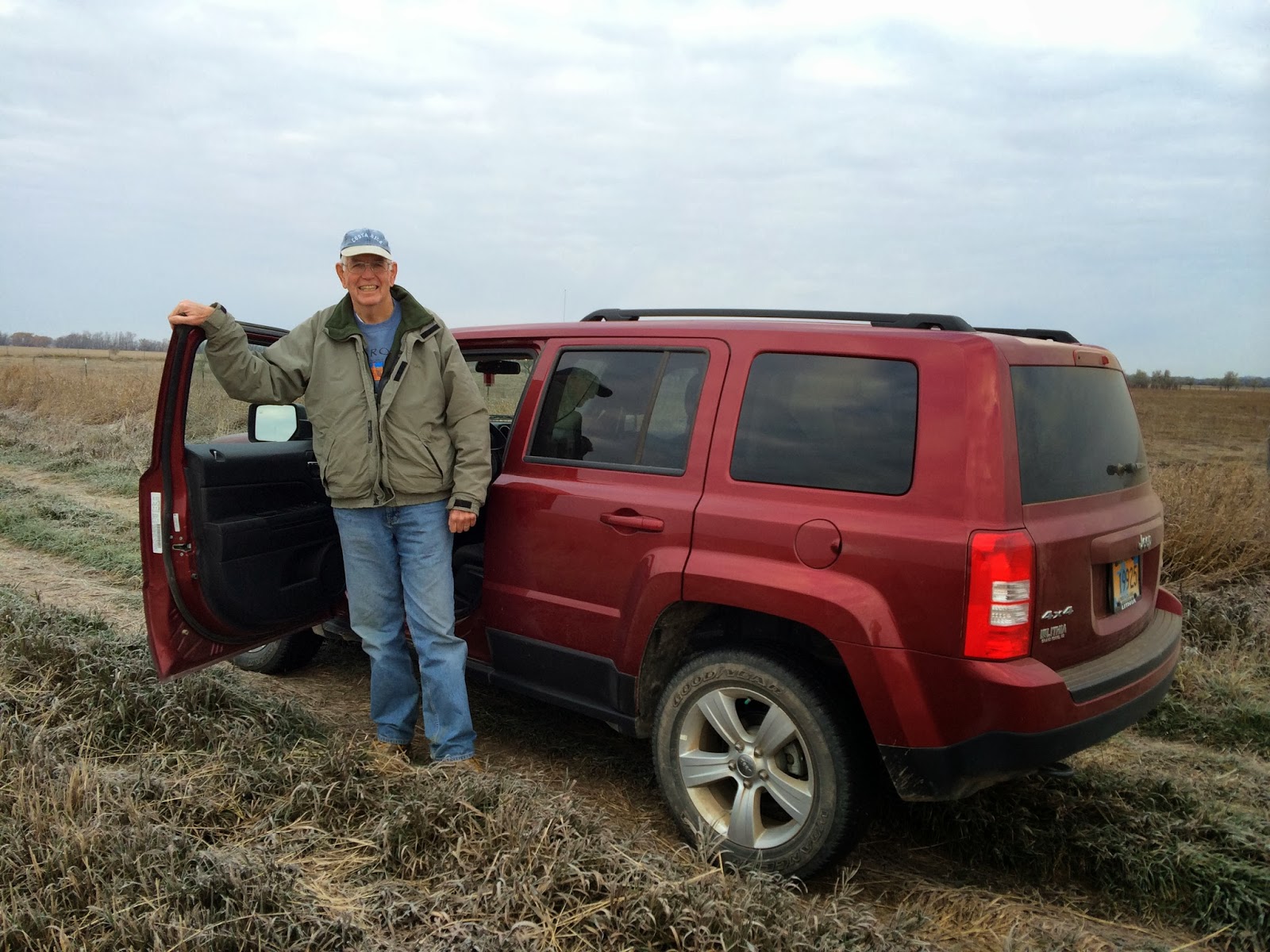 Dave Lambeth - local birder extraordinaire and my guide for the day.

Much of this land is farmed (for corn and sugar beet) while the rest is open grassland. Dotted among the fields are Russian Olives, an invasive species. As well as breaking up the distant vistas these trees provide food for the grouse. This is where they go for breakfast - they like sitting in them in the early morning and nibbling at the berries. (What they do for coffee, I have no idea. Poor things.)

As we're driving down a dusty road, and I'm taking in this new landscape, David suddenly stops. We've scared up a flock of grouse. They're flying away from us: flap, flap, flap, flap - glide - flap, flap, flap, flap - glide. I can see white in the tail - and a tail that's very pointy. Sharp-tailed Grouse!! We're not even an hour into our search and we've already found them!  Great job Dave and North Dakota! Some of them land in a nearby Russian Olive... 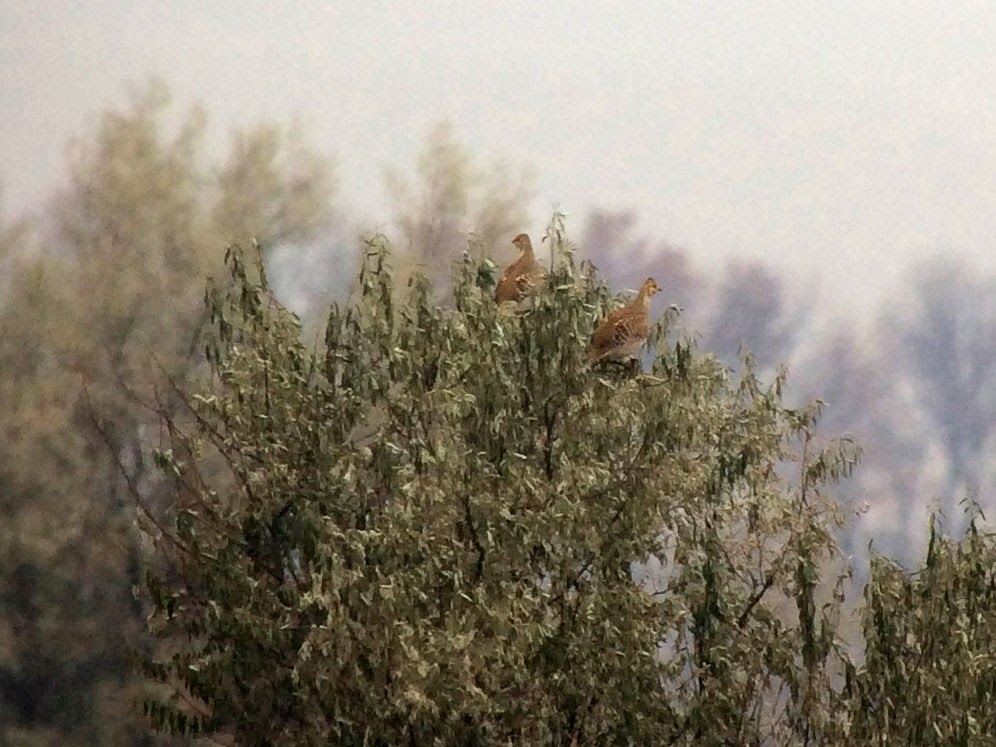 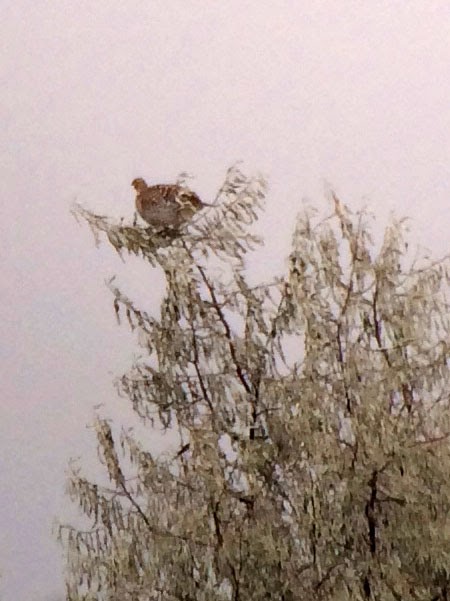 These birds are surprisingly large - bigger than Spruce Grouse and Ptarmigans. And yet, somehow they manage to not fall out of the trees... 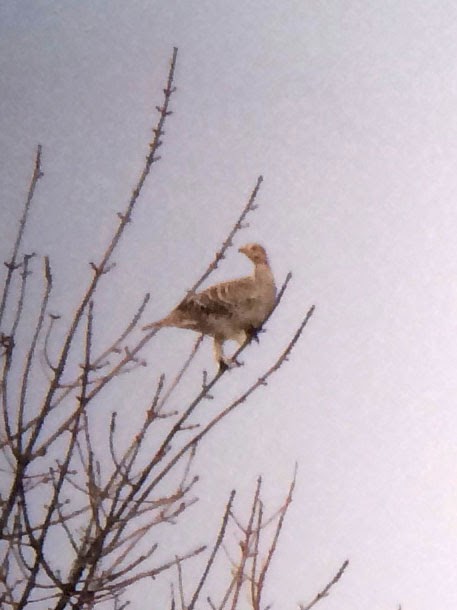 Hey - I think my chair is going to break...
(Damn those Ikea Olive chairs)

Others are on the ground, and incredibly performing part of their display - necks stretched, head sticking out, foot-stomping and moving around like little wind-up toys. Occasionally one will chase another away. And as they're doing all this, I can hear the faint popping sounds of their display calls.

We check a couple of other spots during the morning, and see two other groups, bringing our total to over 50 birds. Each time we're alerted to their presence by accidentally flushing them  - and seeing the fat little birds buzzing away on whirring wings. But we're often able to relocate them in a tree or on the ground.

This special habitat of grassland plains, which the grouse like so much, has been partly saved from agricultural development by it's high moisture content - which in many areas is too wet to cultivate. Unfortunately, that's starting to change now as "field tiling" is being used to dry out the land making it suitable for crops. (In tiling, porous tubes are dug into the ground which collect and drain away the water.) It's a threat not only to the grouse, but to everything else that lives in this unique and beautiful habitat.


Grand Forks isn't just plains though - we also visit the local water treatment plant, which is now packed full of wildfowl, with a few lingering Franklin's Gulls and a newly-arrived Snow Bunting. But these birds won't be here for long. Yesterday saw the first snow of the winter for Minnesota, and North Dakota won't be much further behind. Soon these open spaces will be white, covered in a blanket of snow.

Thank you Dave for showing me an awesome bird, and for taking me out to a beautiful part of the country. 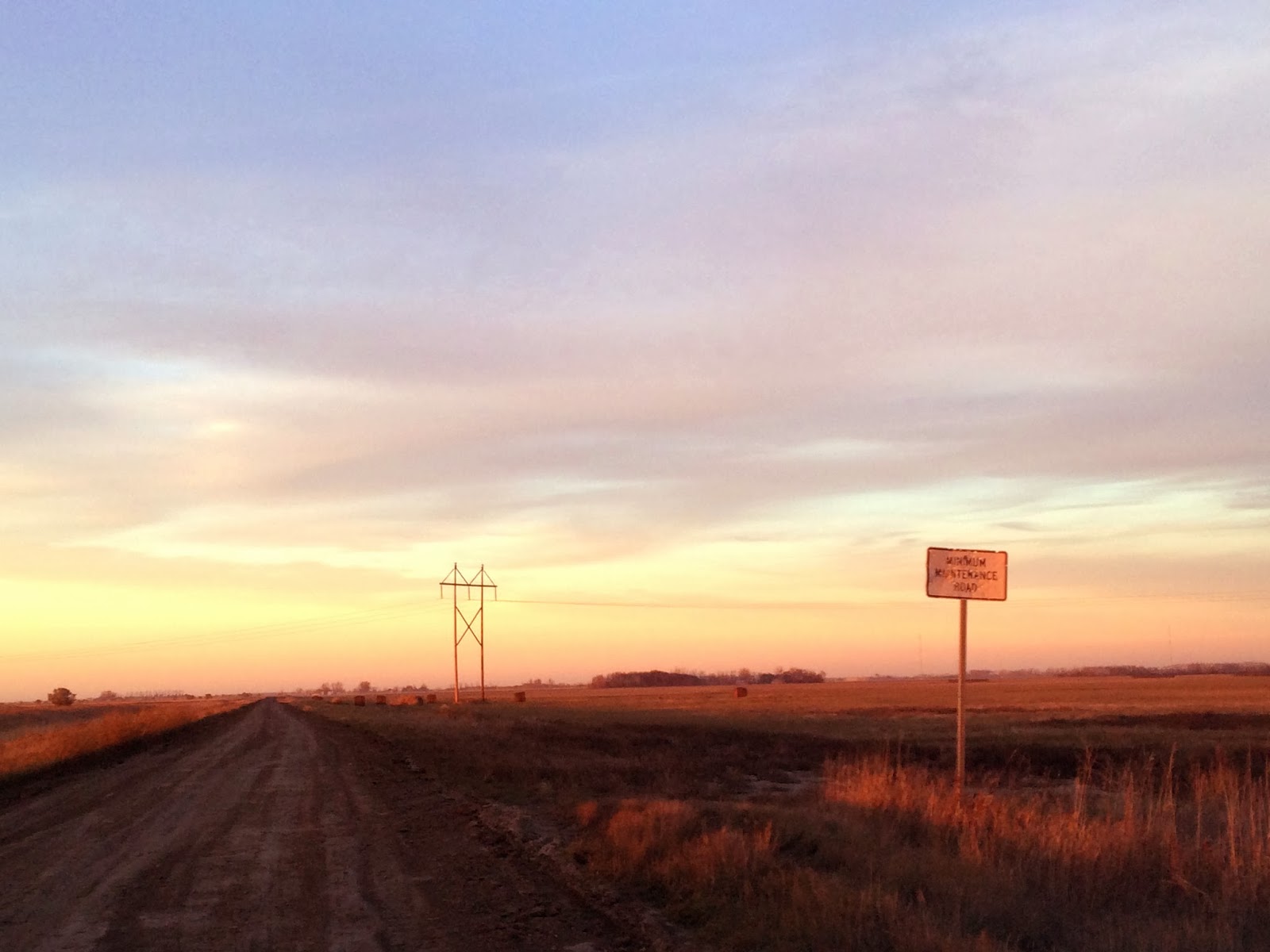