I'm met in Newfoundland by a welcome and familiar face... 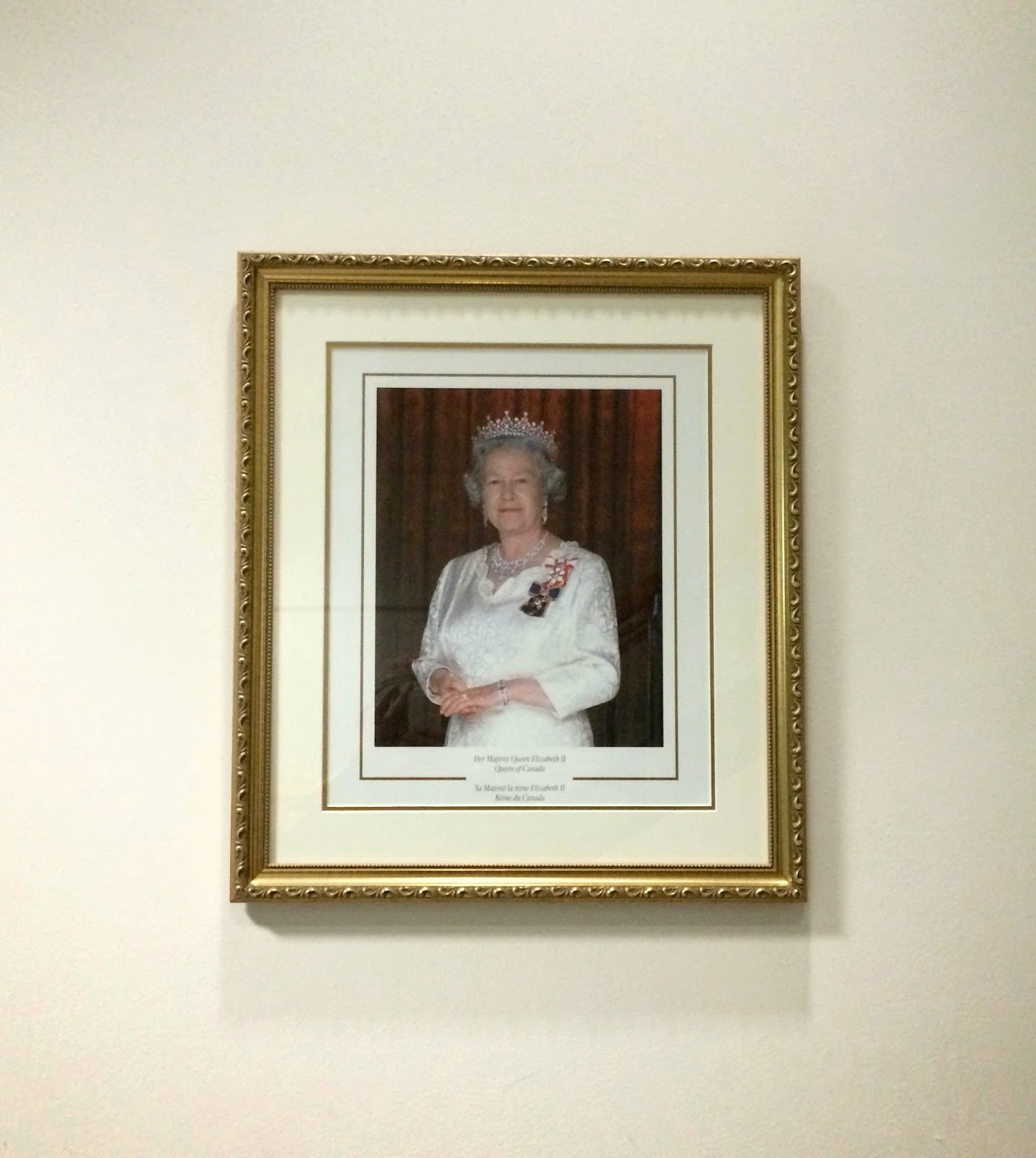 And by a name that sounds familiar? 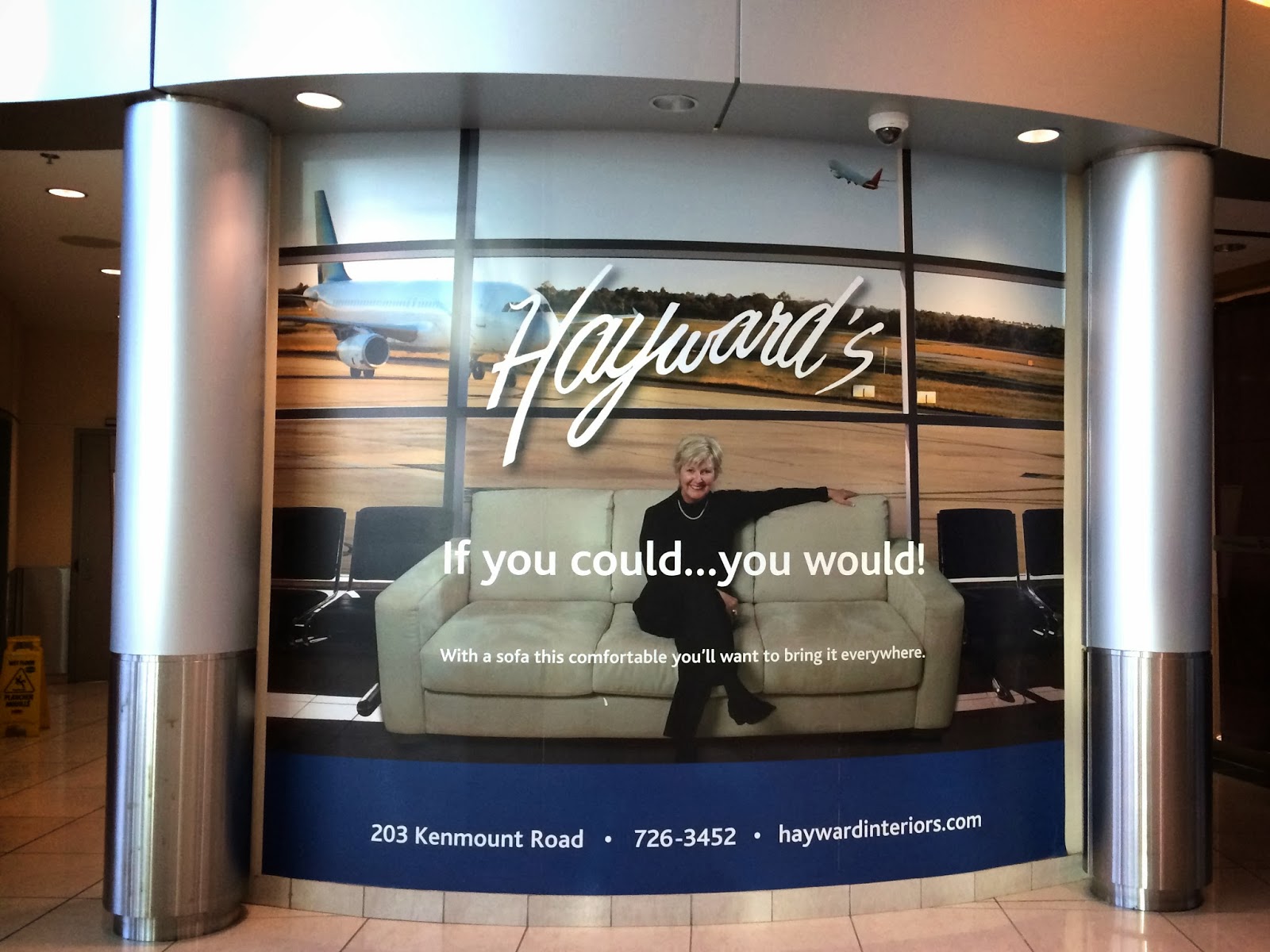 Newfoundland, which I quickly discover is pronounced new-fen-LAND (stress on the final syllable) is Britain's oldest colony. In 1497 John Cabot (actually Giovanni Caboto - he was a Venetian) under Henry VII claimed the island for the English. And in 1583 it was added as a Royal Charter under Elizabeth I. But, of course, like most parts of the British Empire there were people here before it was "discovered." The native Beothuk were here long before the British, but after confrontation, disease and bad luck, finally died out in the 1800s. And 400 years before the British, the vikings, under Leif Eriksson, were regularly fishing here, and had settled an area they called Vinland. Newfoundland was the last province to join Canada, doing so only in 1949.

And, more than 500 years after John Cabot, I'm here! Admittedly, on a slightly less important mission: I'm tracking down a couple of birds. They could both be long gone: a Pink-footed Goose that was seen on a town pond a week ago, and a Yellow-legged Gull that was found a month ago.

The goose chase takes me through the barren interior of the island, out to the north coast. The forests, lakes and open highlands remind me of the stark beauty of Scotland. 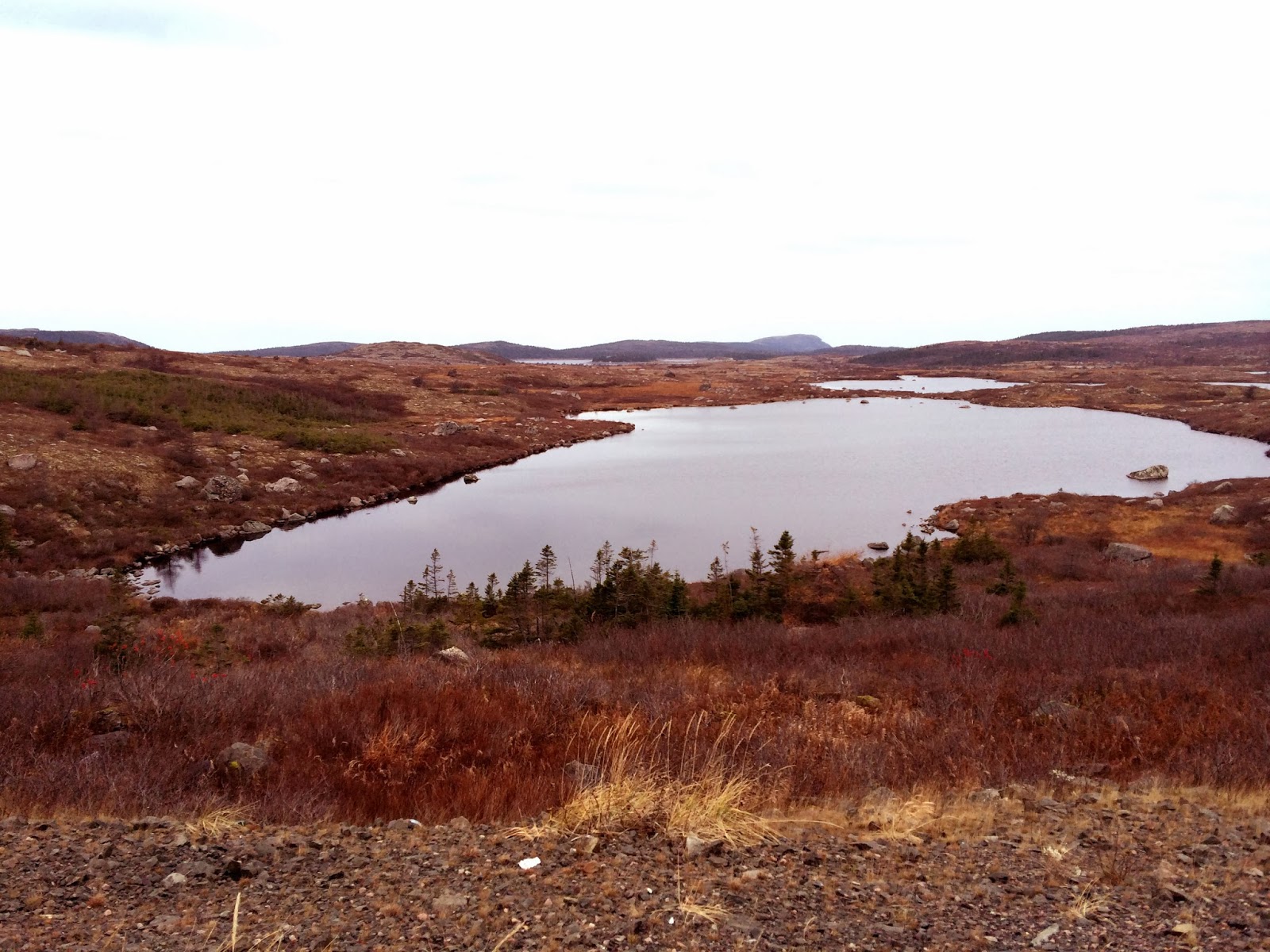 After a lengthy drive, I finally arrive at Bonavista. Allegedly the site of John Cabot's first landing, he exclaimed, "O buon vista!" (Oh, happy site!) I navigate the haphazard, medieval streets before finally finding the pond. A quick scan shows there's no goose. It's a long drive back to St. John's. It's not a happy site. 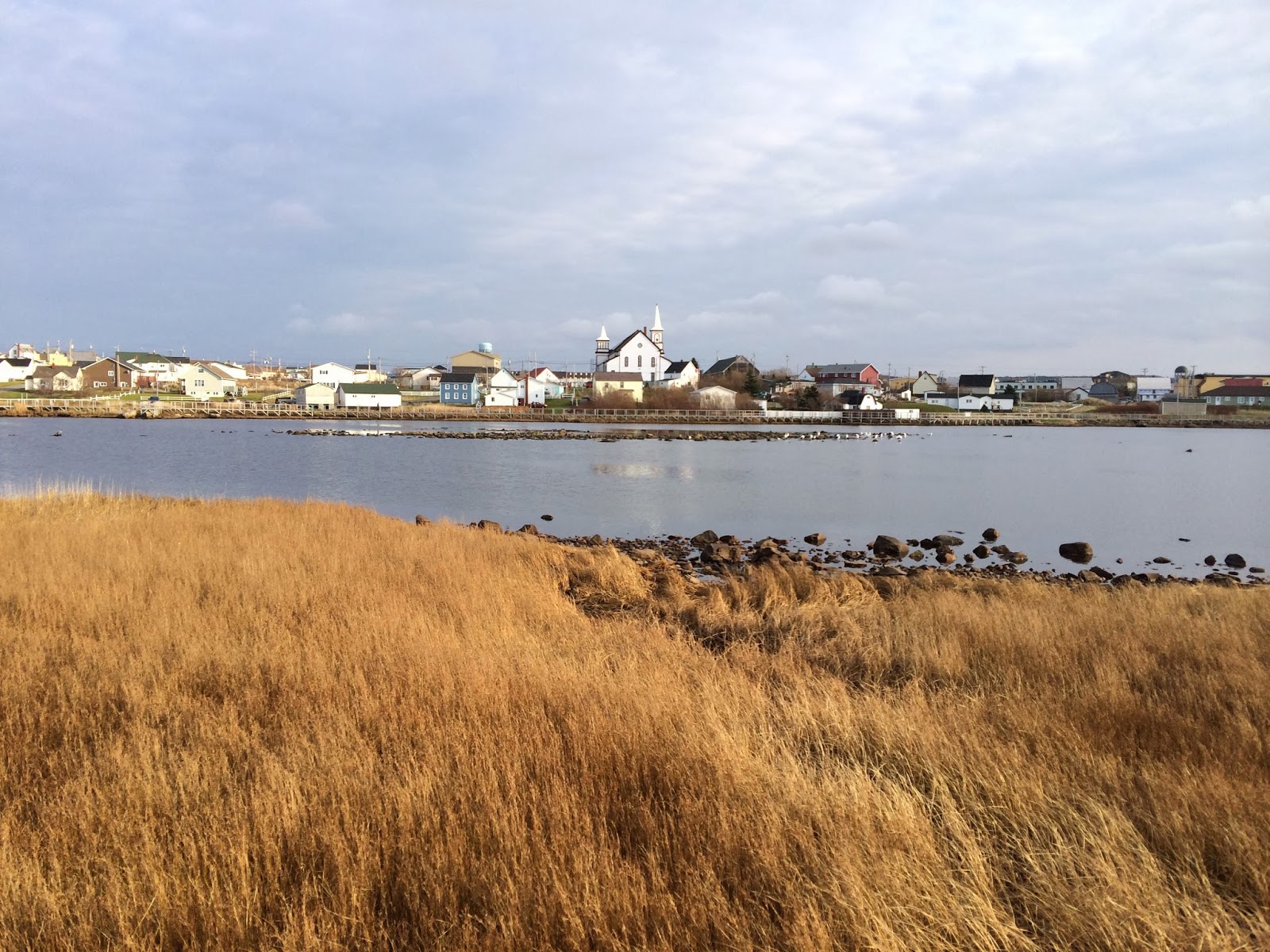 Old Day's Pond, Bonavista.
Could have been a happier site.

Newfoundland was settled largely by the British (more than 50% of the population claim British and Irish ancestry) with numbers bolstered by Loyalists fleeing the American War of Independence from the south. And this is evident in the accents, which originate from the West Country in England (Cornwall, Devon, Dorset) and Southeast Ireland. Since the pockets of habitation here have remained largely isolated (a functional road network is relatively new) so too have the accents. Locals can tell the origin of anyone on the island as soon as they open their mouth. To me, the accents are thick, rapid and with a gentle Irish lilt. And while I don't understand everything that's said to me, I am happy to be in a place where mine is not the only unusual accent!

And it's not just the accents that are British - the architecture is too - like the brightly-colored row (terraced) houses of the capital, St. John's. 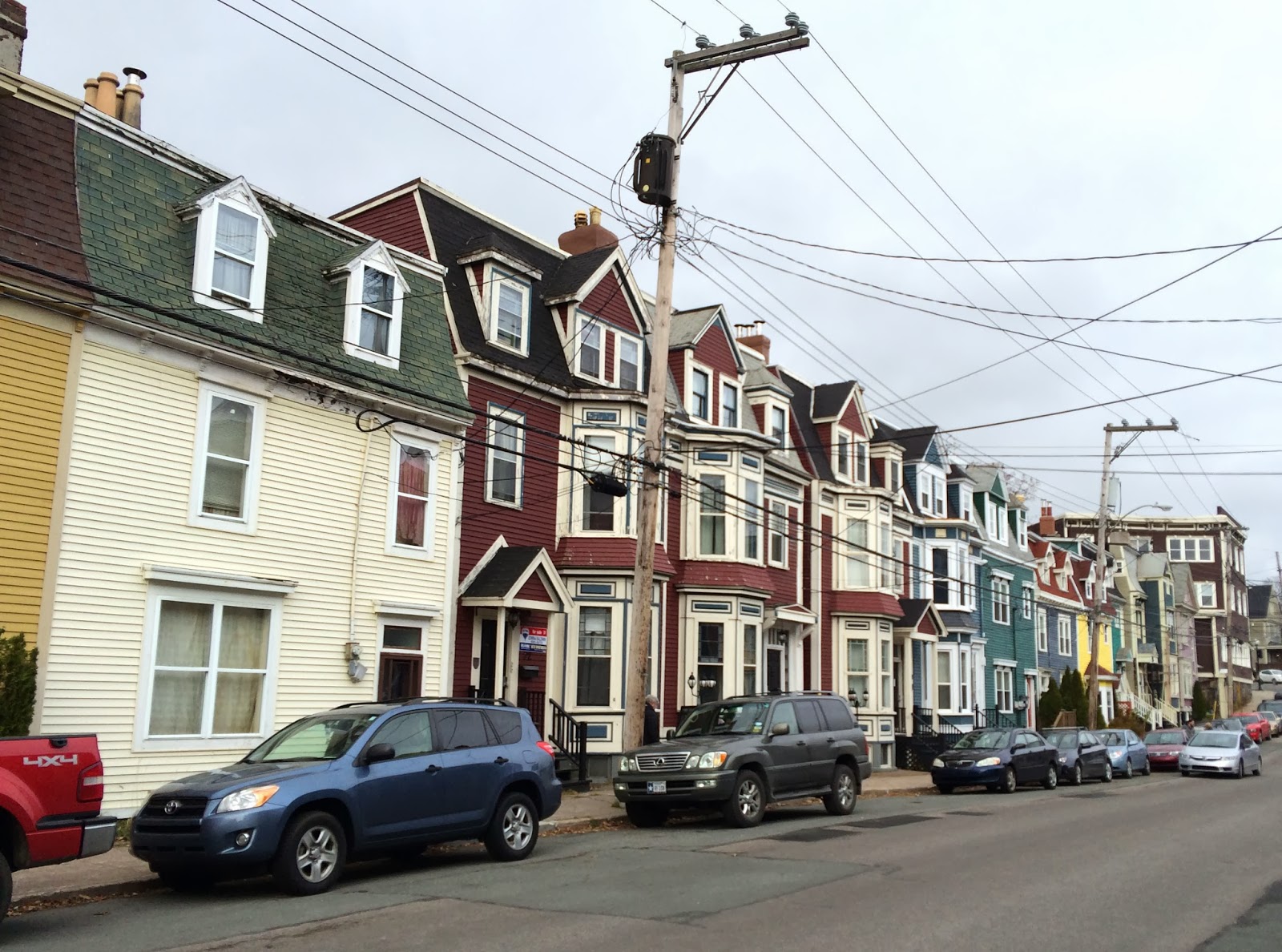 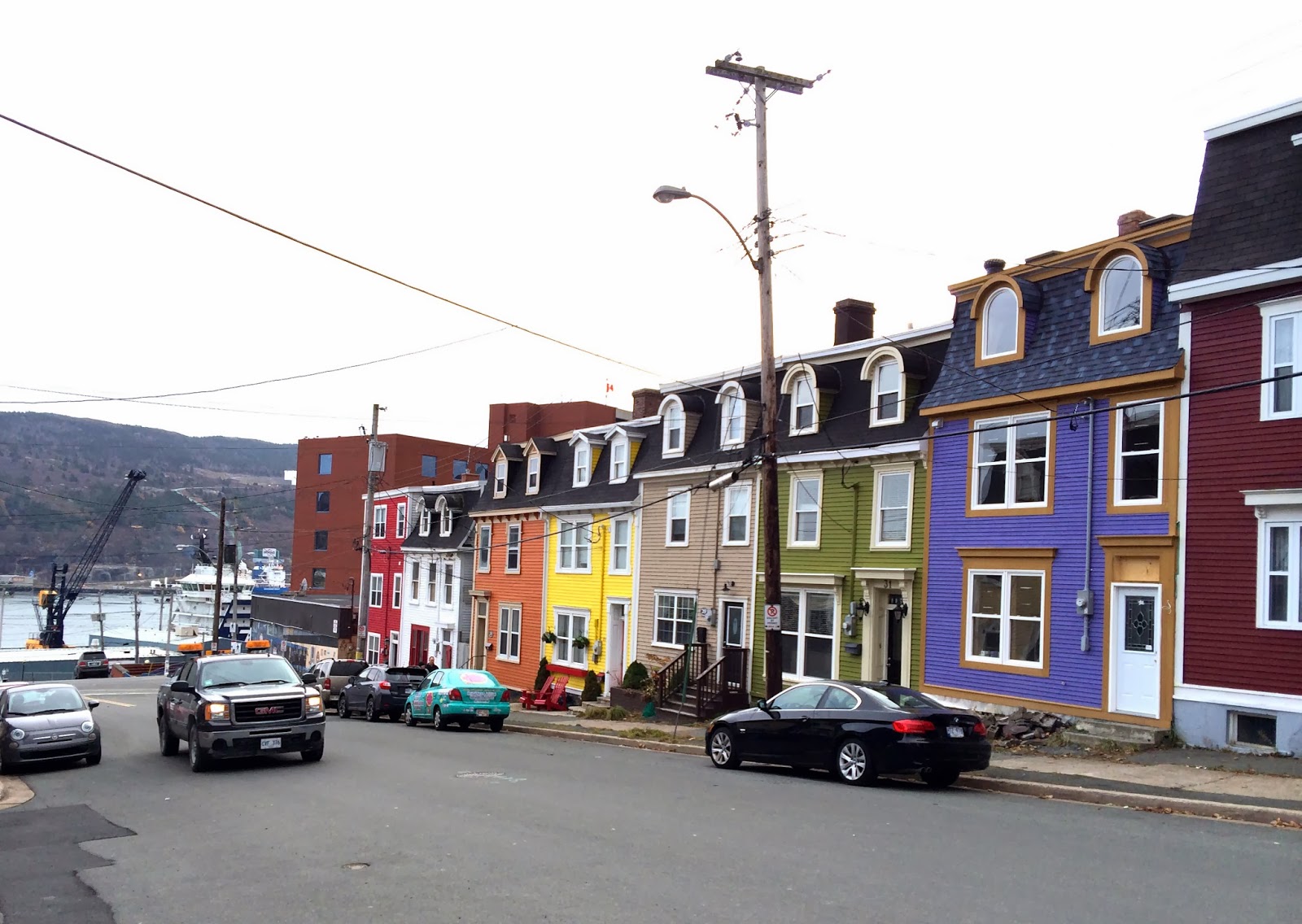 The streets of St. Johns climb steeply up from the harbor

After striking out yesterday, I'm hoping today will be more successful. Today's chase is Yellow-legged Gull, a European bird that breeds around the Mediterranean Sea. It's about the size of a Herring Gull, with bright yellow legs, and a back that's intermediate in gray between Herring Gull and Lesser Black-backed Gull. And Newfoundland is the best place to see this bird in North America. In recent years there's been one or two birds wintering in St. John's. Except last year, when there were none. And then this year, on Oct 21st, Bruce McTavish found and photographed one. It has not been seen since.

Local birding guide, Jared Clarke, thinks the bird's still here - there just aren't many people out looking for it. Despite being very busy with kids, soccer practice, and chasing the island's first Virginia's Warbler, he put together a detailed list of places for me to check for gulls - centering around Quidi Vidi Lake. This is a loop that takes me past all the local sightseeing attractions: the local dump, the golf course, the Fishing and Ocean department, as well as the lake itself.

My first stop is Quidi Vidi Lake, which is full of gulls - mostly the small, round-headed Iceland Gulls... 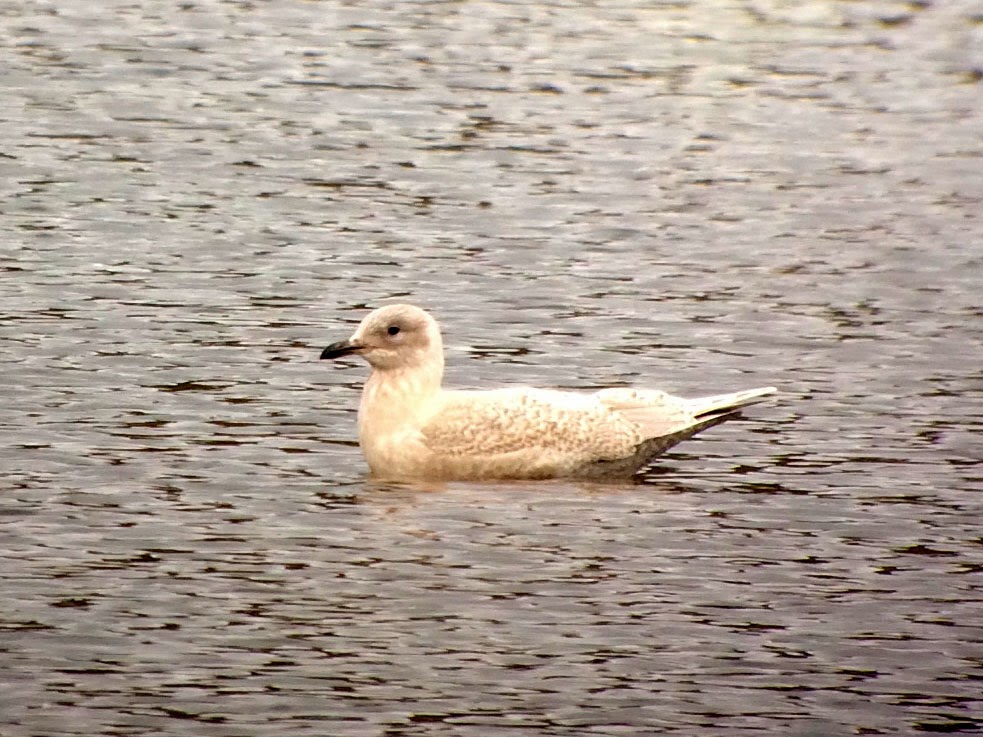 as well as up to 10 Black-headed Gulls - a European Gull that's rare elsewhere in the ABA region... 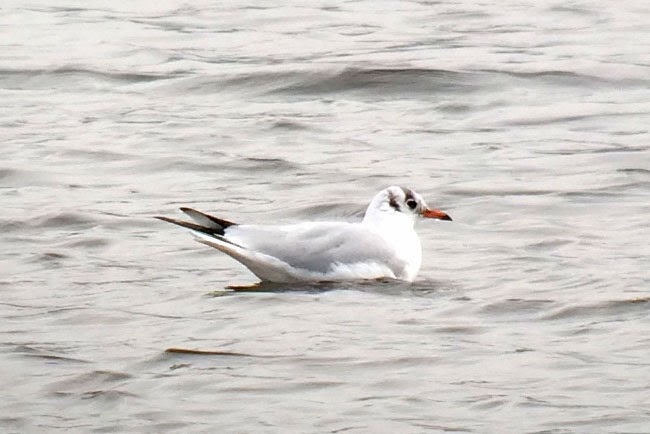 But no Yellow-legged Gulls.

The roofs on the brightly-colored houses of Pleasantville are full of gulls this morning - but they're all Herring and Great Black-backed: 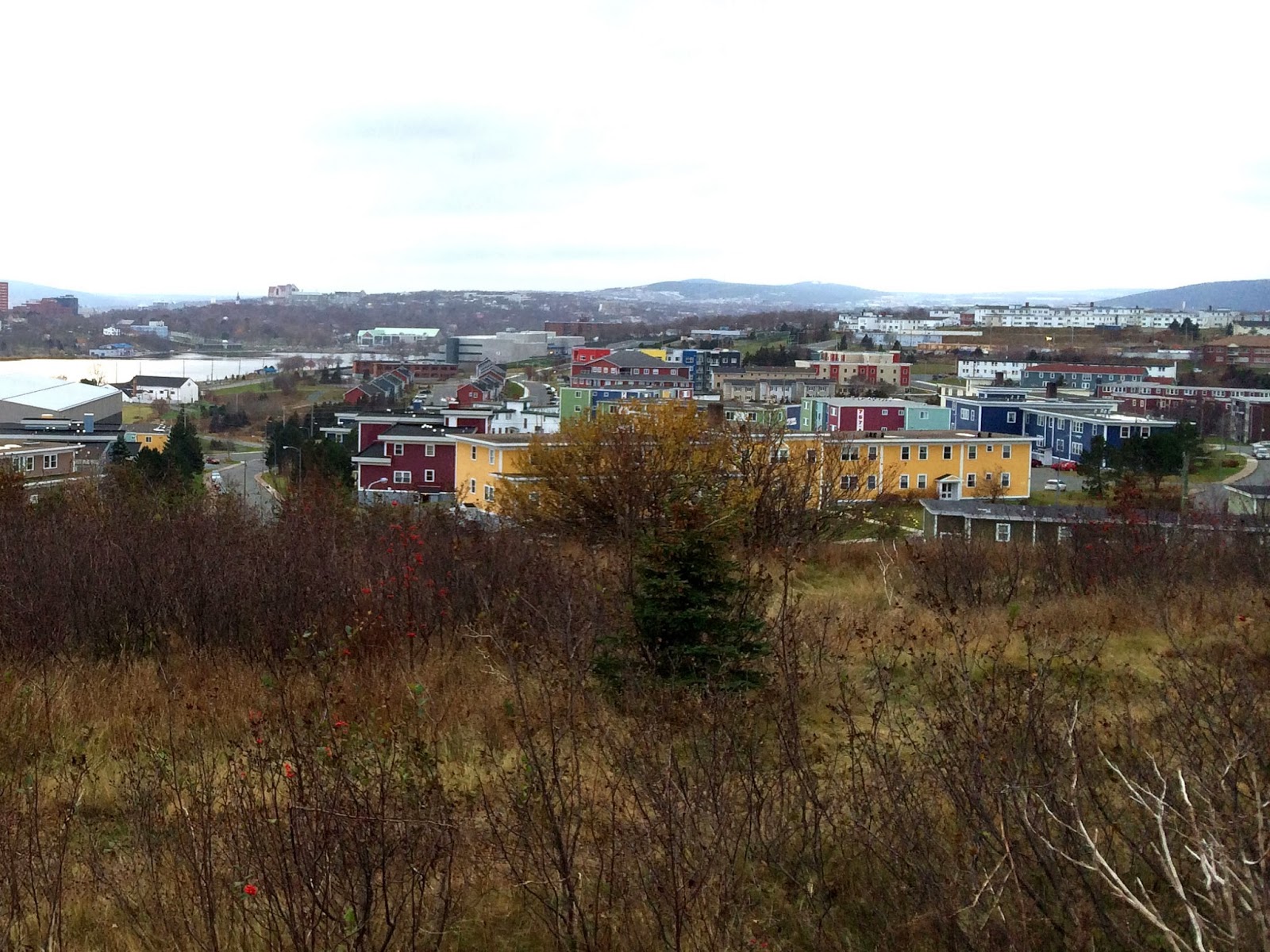 Pleasantville - just north of Quidi Vidi Lake.
Would have been a lot more pleasant if the gulls had yellow legs!

I spend the morning following the rest of Jared's gull route and come up empty. I retire to Coffee Matters, which is my (excellent) caffeine stop for the day and access to the outside world (I'm using their wifi since I have no cell reception here.) 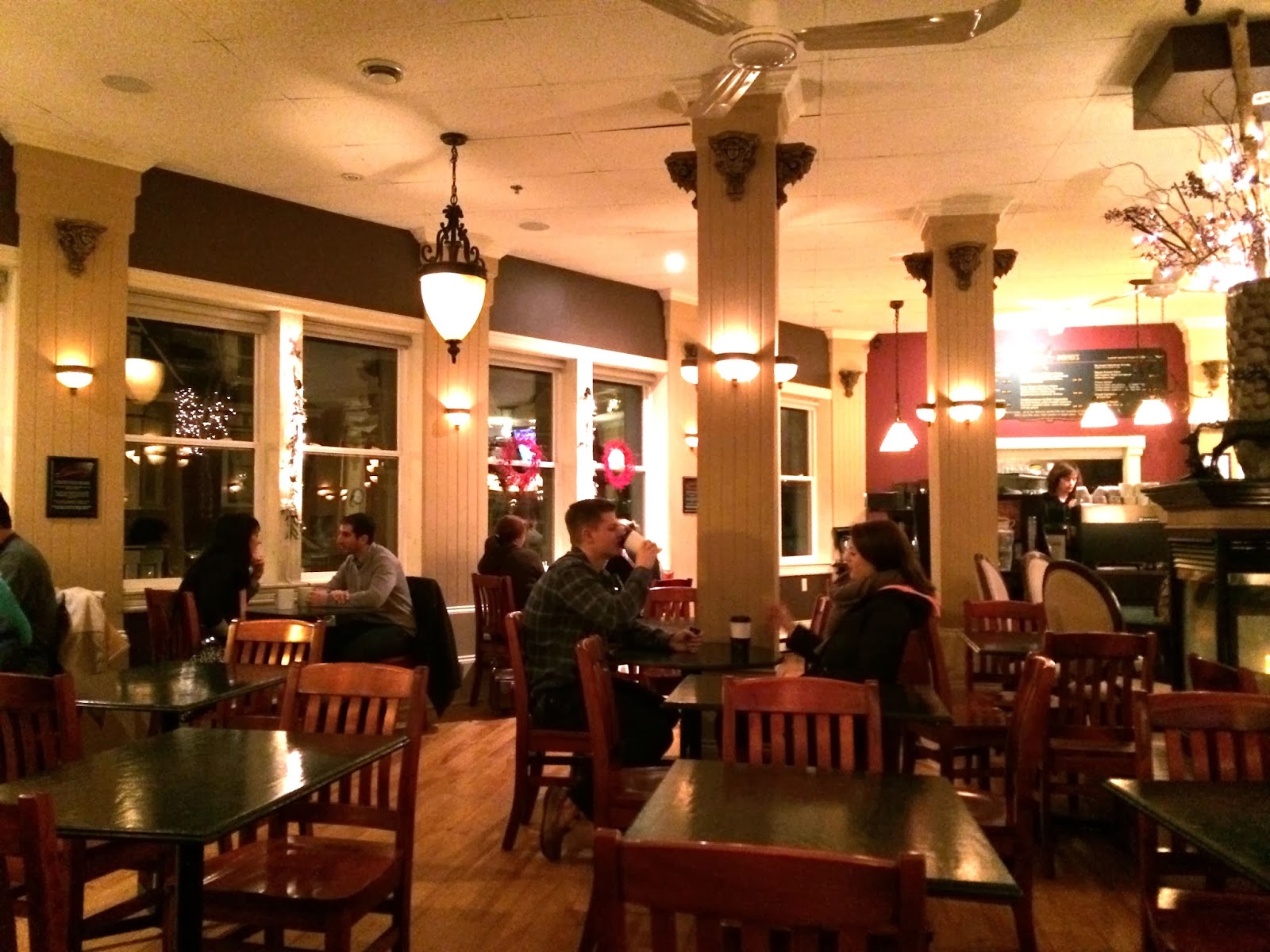 Coffee Matters. Sure does!

The afternoon is a repeat of the morning's gull search. I see a lot of gulls, just none with the right leg color. Maybe Bruce's bird last month was a one day wonder?

On my way to Quidi Vidi Lake this morning, I drove past an apartment building whose roof was covered in gulls. They were the first I saw today, but since they weren't on Jared's list, I drove straight past. After checking all the sites this morning, I went back before lunch and did a brief scan with my binoculars - all Herring and Great Black-backed Gulls. This afternoon, I went back again, hoping for some new arrivals in the gull mix. (There weren't.) And then, on a whim, late in the day (3pm) with only an hour or so of light remaining, I went back again. This time, I got my scope out, hoping that I'd missed some subtlety on a Yellow-legged Gull (I hadn't.) But I did see something interesting: the head of a Herring Gull! It was peeking over the top of the roof. Of course - there were gulls on the other side!

After what seemed an inordinate amount of time, I managed to find somewhere to park on the other side of the building with a view of the roof. And I could see there were plenty of gulls on that side. I got out, raised my binoculars, and the first bird I saw was a classic Yellow-legged Gull! It had all the field marks for which I'd been desperately searching all day: bright yellow legs, white head, and gray back (darker than the surrounding Herring Gulls.) Wow - I couldn't believe it. I'd found the bird! Perseverance really does pay off!

I went back to the car to get my scope (to photograph the bird) when I heard gulls screaming above my head. And even before I looked back to the roof behind me, I knew they were the same gulls. My heart sank as I saw the roof was now devoid of gulls. They circled overhead, and then slowly drifted out towards the harbor. I waited for them to return (they didn't.) And while the gulls were probably heading off to roost for the night, I reflected on my incredible mix of luck - in finding the bird, and then immediately losing it! It had probably been there all day. And within seconds of my arrival, it disappeared for the day. And while I was upset not to get what would have been a great photo, I was happy that my trip here had been worthwhile. 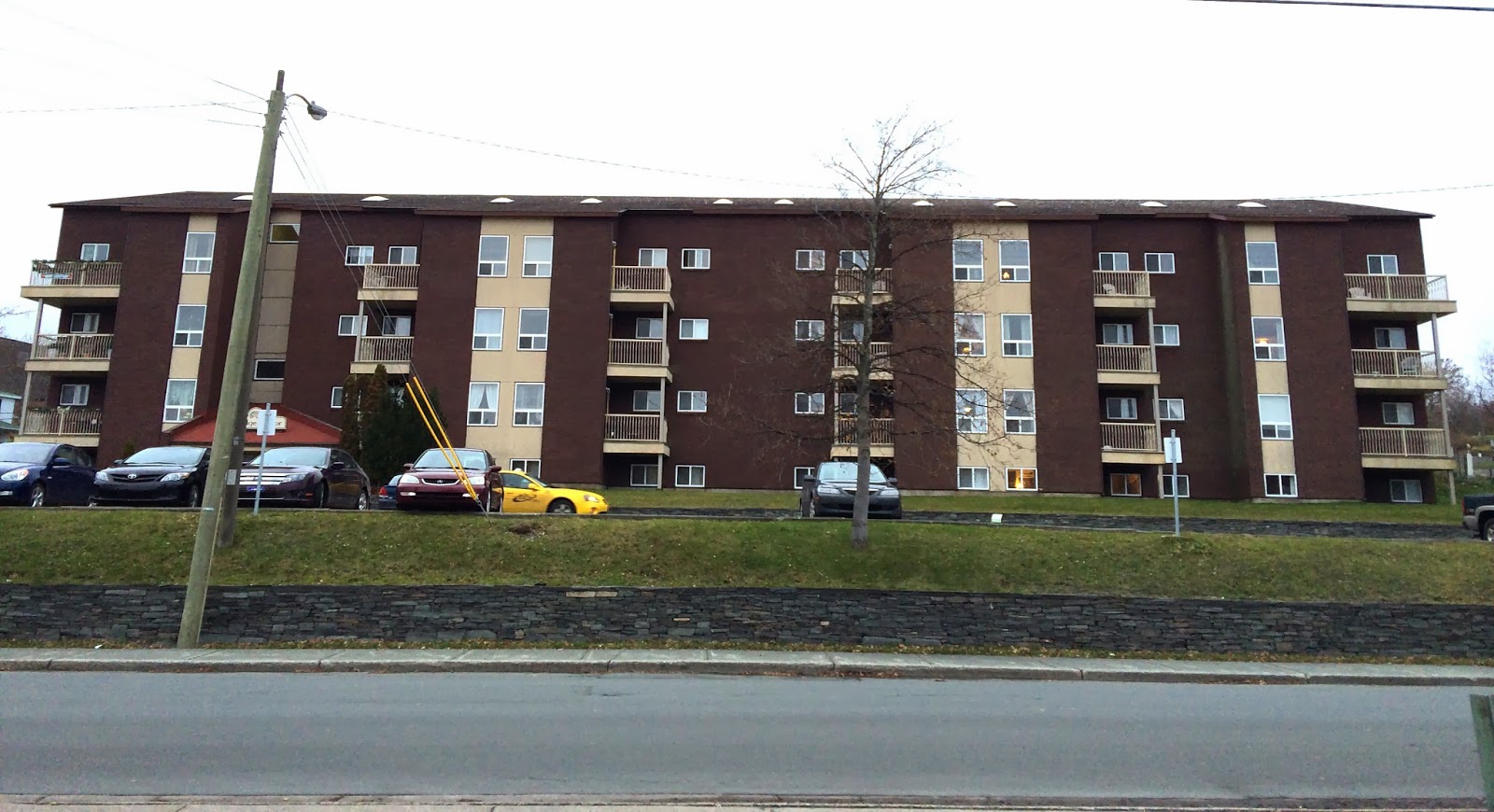 I met up with Jared later for a celebratory beer, and thanked him for providing such helpful suggestions. Without his confidence in the gull still being here, I probably wouldn't have come. And then I headed off for an early night. Tomorrow, I'm flying back to Nova Scotia. And remarkably, during one of my (many) coffee breaks today, I discovered that a Pink-footed Goose had been relocated to Truro, NS - only an hour from Halifax! Maybe I'd make up for yesterday's wild goose chase?


UPDATE: My recent trip to North Dakota for the Sharp-tailed Grouse made the news! The Grand Forks Herald wrote a story about my trip and interviewed Dave Lambeth and I. I'm sure the folks of North Dakota are raising their eyebrows at such a pointless endeavor. Either that, or they're preparing for the Big Year tourist industry!