Nome is about 100 miles south of the Arctic Circle in western Alaska. It can only be reached by plane, or dog-sled (the annual Iditarod Trail Sled Dog Race starting from Anchorage ends here.) I opted for the plane (it's 9 days faster.) It's hard to imagine that this was once the most populous city in Alaska: in 1900 there were over 10,000 hardy souls here. They were all trying to cash in on the gold discovered in Anvil Creek by "Three Lucky Swedes" in 1898. The gold rush may be over today (the population is down to about 3,000 now), but small numbers of prospectors are still drawn to these remote shores. Looks like business is a bit slower these days though... 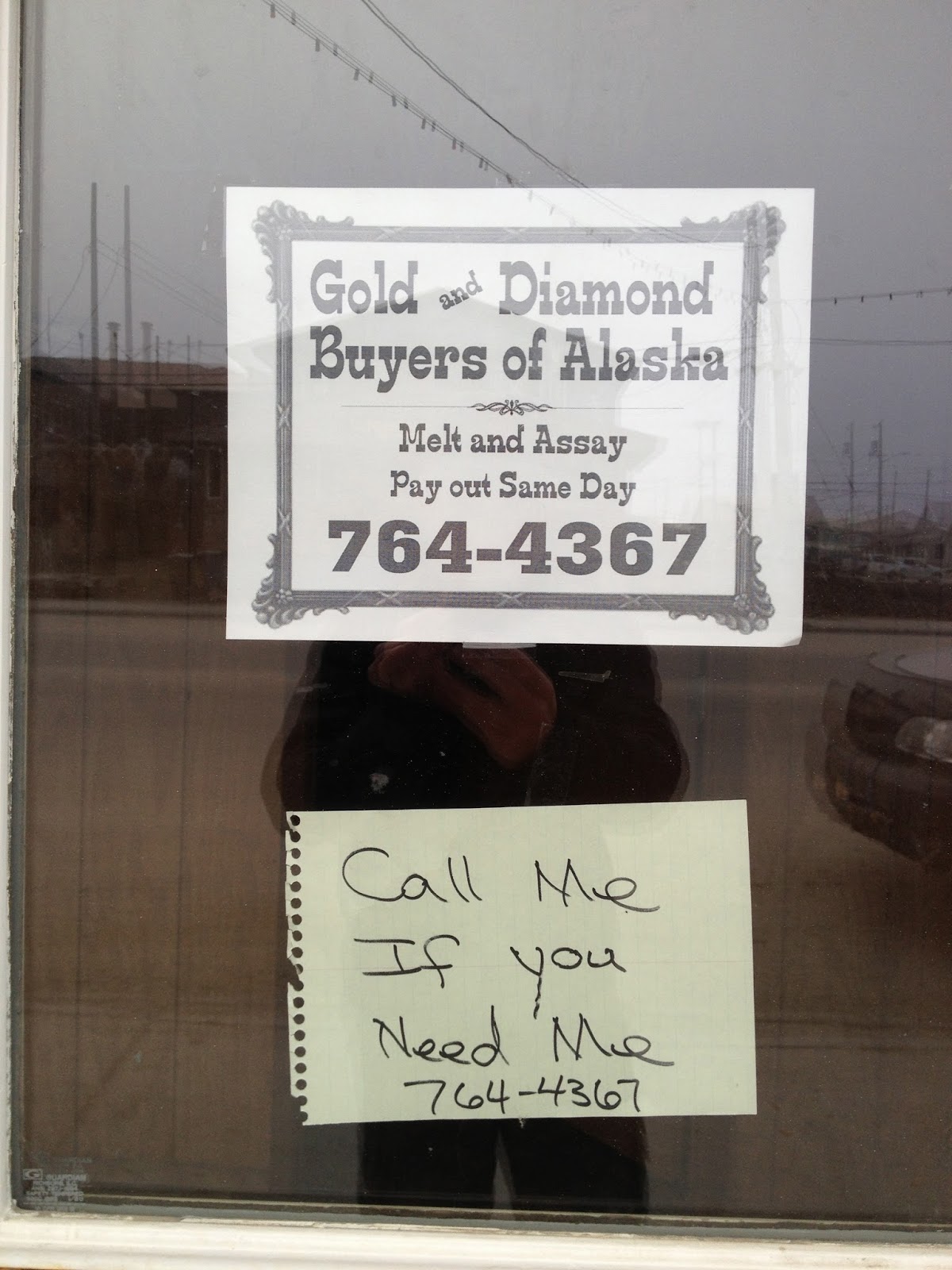 At this time of year ("spring") you're more likely to run into birders prospecting for rarities than gold dredgers. That's why I'm here!

This was an exciting trip for me personally, as I was going to meet (and bird with) a big year competitor. I first heard of Hans de Grys in Arizona in Jan. He'd been there a week ahead of me and seen everything. The same happened again in Florida. And Texas. The guy was a birding machine, seeing every bird and staying one step ahead of me. (I have his eBird records to thank for helping me find all the birds he'd left behind!) We'd been communicating and sharing birding info for the past month - he sounded friendly and I was excited to finally meet my arch-nemesis / new birding pal. He's been keeping a blog too - it's http://reallybigyear.wordpress.com/ and is full of wit, wisdom and some cracking photos (warning - he rather likes sunsets.) Hans is doing a mid-year to mid-year big year (as an academic sabbatical), and this is almost his last trip.

I met Hans in Anchorage about an hour before our flight. My "birder checklist" for Hans was quickly ticked for the following: normal, funny, friendly, and, importantly, knows his birds. I saw a lot of great birds in Nome, but the real highlight for me was making a great birding friend. We birded together for 3 and half days and I enjoyed every minute. We saw a lot more birds too - having another pair of eyes and extra brain really helps.

As we landed, the pack ice reminded us just how close to the Arctic Circle we were: 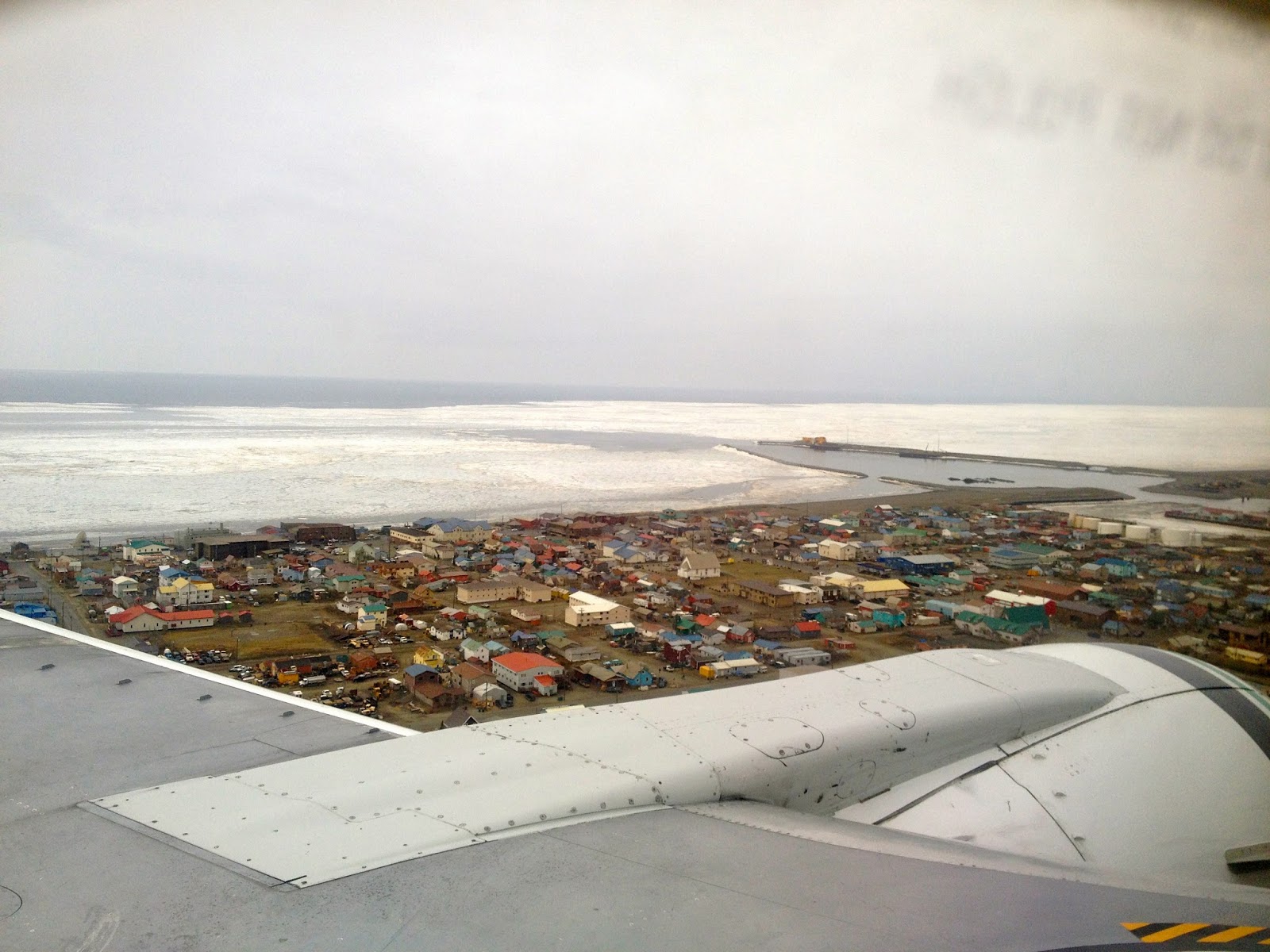 Flight into Nome - pack ice around the harbor.

It would be in the thirties during most of our stay with a chilling wind and even snow. The coastline changes every day with pack ice breaking up and reforming… 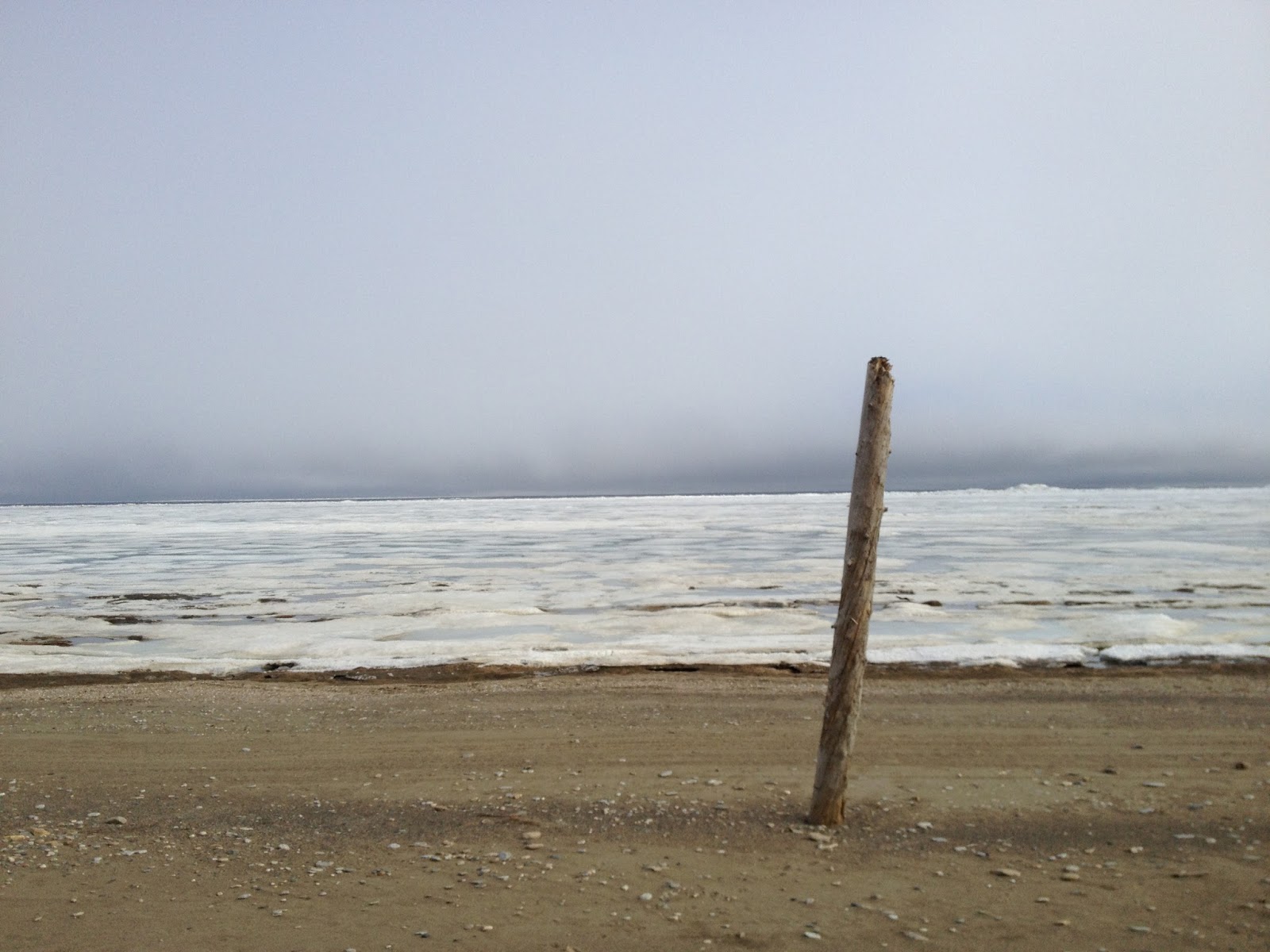 Not the best spot for sea watching.

Accommodation and rental vehicles are tough to come by during spring migration. We were set with the first... 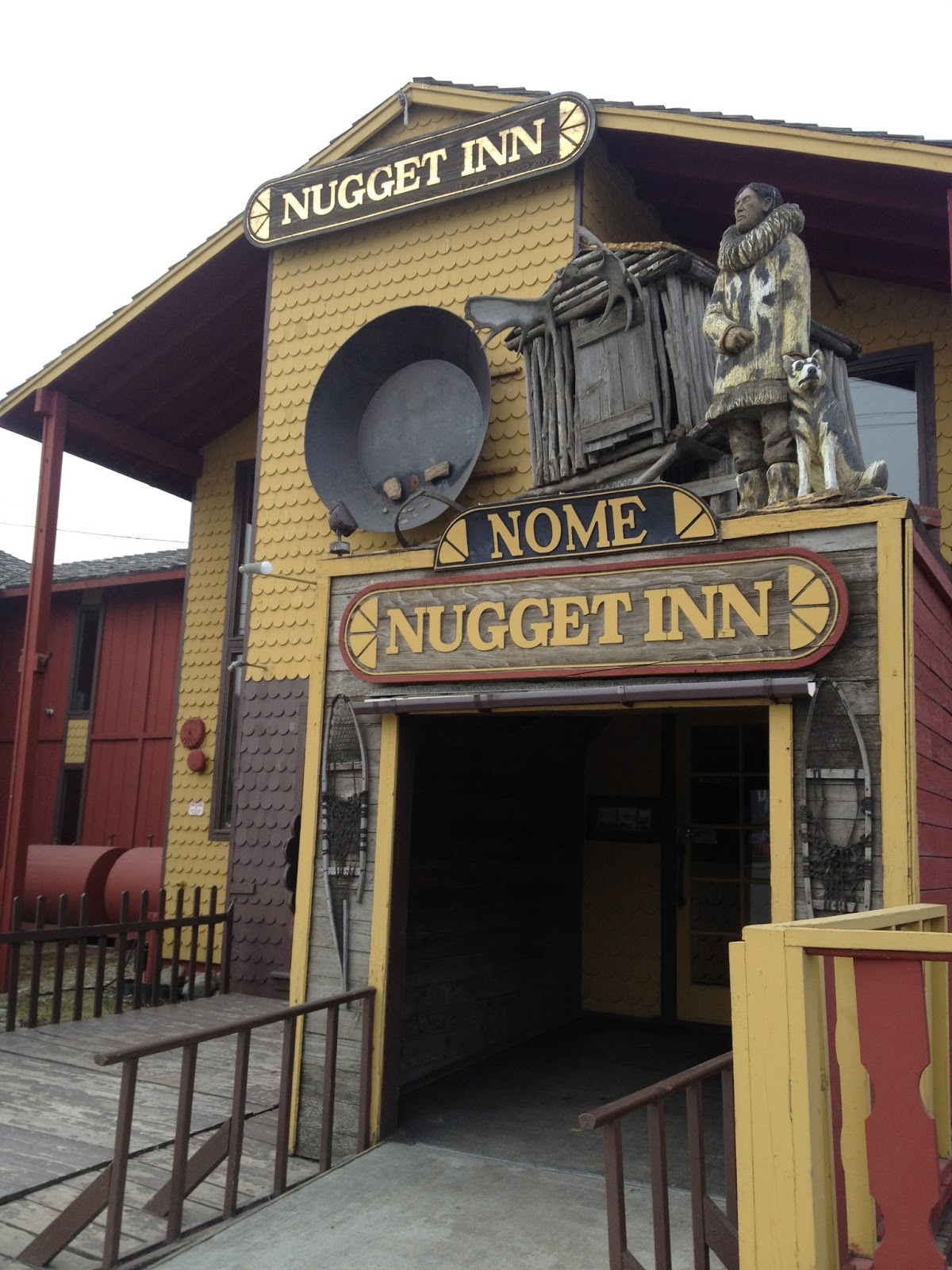 ... but lacking the second for our first day. But luck was on our side - we met father and son birding hotshots Joe and Abe Borker who very kindly took us out in their vehicle. At this time of year, it never really gets dark this far north, and so our first afternoon in Nome was as long as a normal birding day anywhere else!

We had a blast on the Council Road. Abe quickly found us all a life bird: an Emperor Goose hiding in the tundra at the back of the lagoon. As we were watching it, in flew some Bar-tailed Godwits: 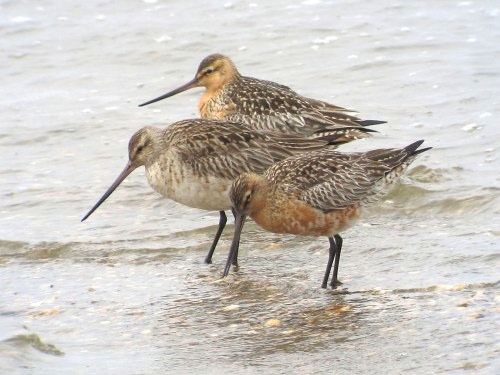 Bar-tailed Godwits breed in Western Alaska.
Note the size difference between the reddish males and the gray female. Most shorebirds show this sexual dimorphism, where females are larger.

Further up the road, we were reminded just how audacious those gold rush dreams were. At the height of the stampede, a rail line was planned all the way from Nome to Vancouver. But by 1903, with crushing debt, and the amounts of gold fading, the line had only gone 35 miles. 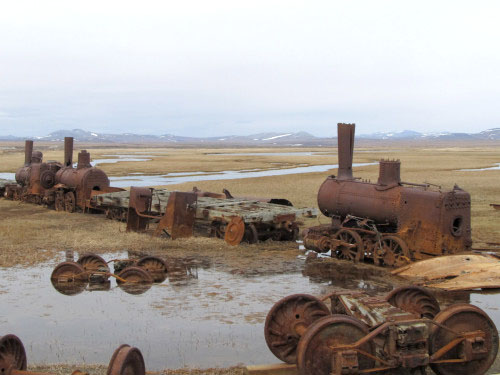 The Last Train to Nowhere.
Three locomotives abandoned on the tundra. (Photo by Hans)

Thankfully, the bridges on the roads are in much better condition. And one, on our first day, was the nesting site for a pair of Gyrfalcons... 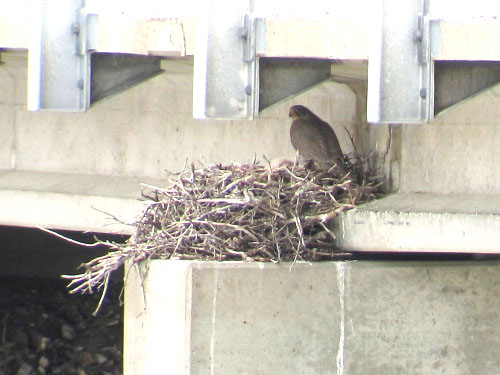 One of the Gyrfalcon parents, standing over some fuzzy babies.
The road is about 6 feet above them! (Photo by Hans.)

Nome is not connected to the main Alaskan road system. But it does have roads - three of them, to be exact. Each goes about 70 miles: two (Council and Teller) end at native villages and the other (Kougarok) just disappears into the tundra! We would typically tackle 1-2 a day (although we once had a "3 road day" which was very exciting!)

The Kougarok Road is famous as the most accessible breeding site for the Bristle-thighed Curlew - a bird that rather sensibly winters in Hawaii. On our last day, Hans, Abe and I drove the 72 miles to Coffee Dome (sadly, a mountain and not a local coffee shop!), hiked up through the tundra (likened to walking on soft, wet, bowling balls) to the ridge - where we saw and heard the bird. Hans and Abe were very excited… 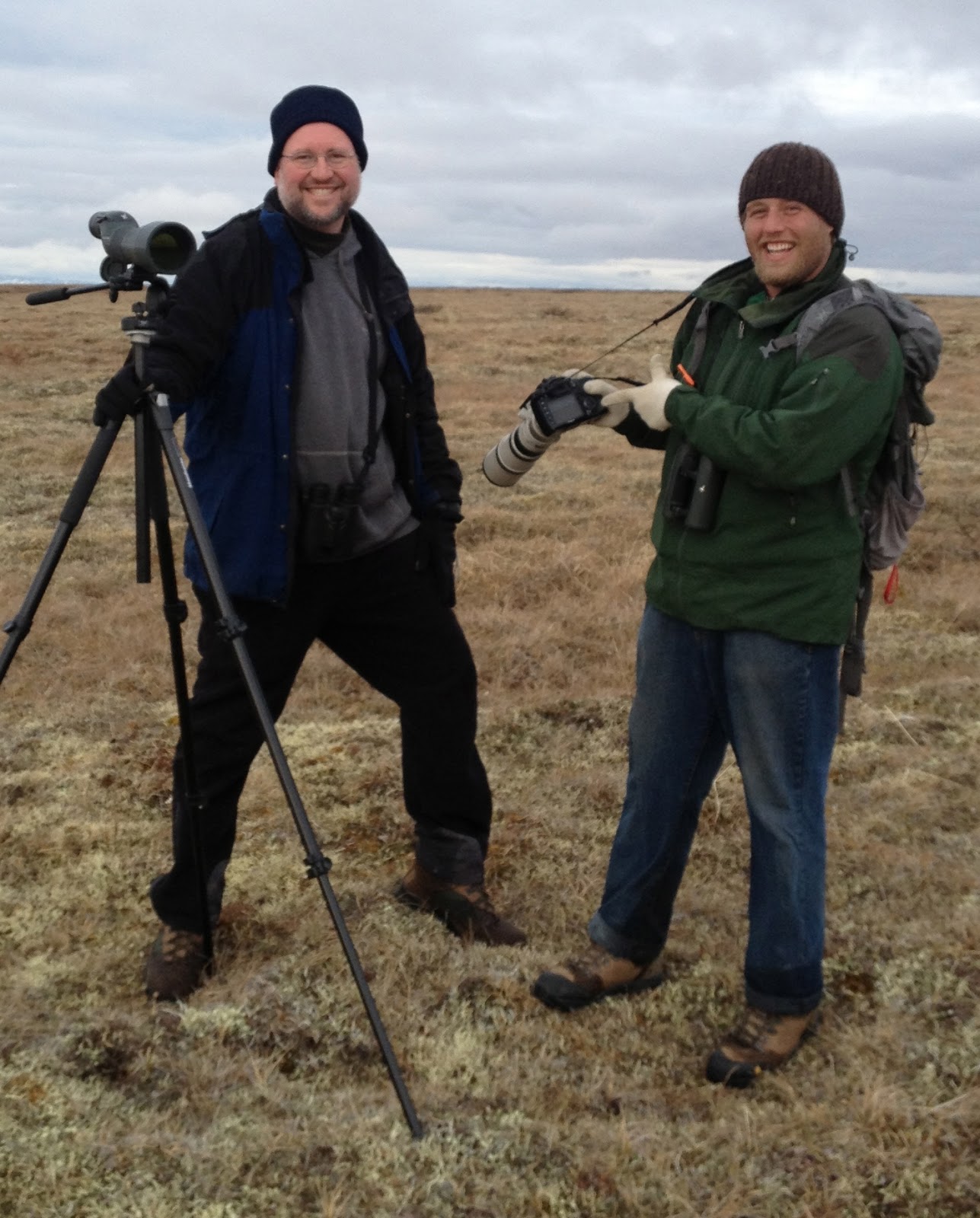 Birders visit Nome for the sheer variety and number of breeding birds - all in stunning plumage. Many of these birds migrate thousands of miles just to be here - from South / Central America, Asia, New Zealand (Bar-tailed Godwit - non-stop), Antartica (Arctic Tern - which sees two summers a year, and more daylight than any other creature on the planet!) and even Africa (Northern Wheatear.) The tundra is a great place to have kids and bring up a family - lots of food (insects, voles, other birds), great lighting, no pesky humans and plenty of space.

Normally seen way out to sea is the Long-tailed Jaeger. This bird feeds on fish caught by other birds - it chases the hell out of them with incredible aerial acrobatics until they drop it. It was great seeing them on land… 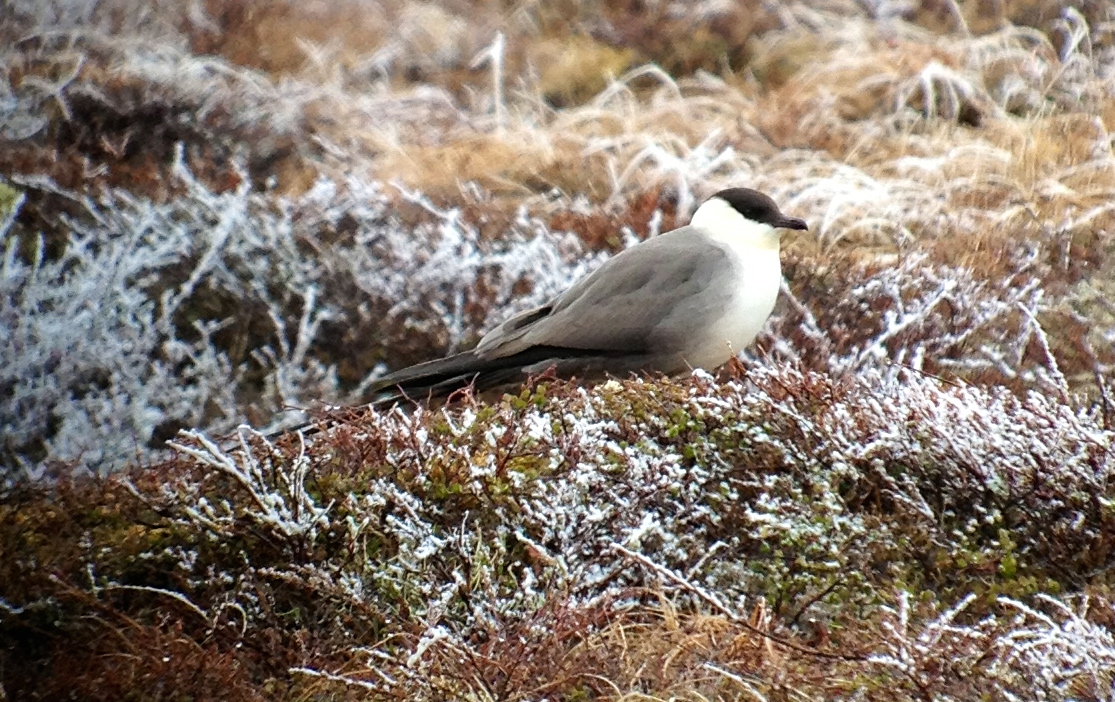 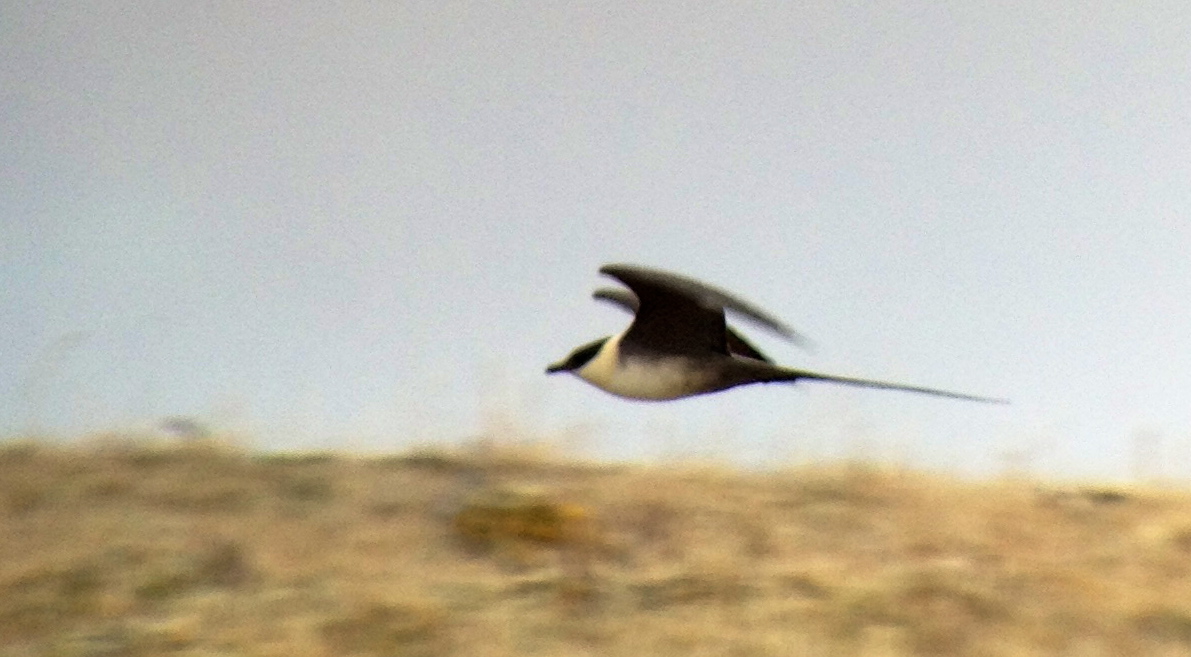 One of my favorite birds here was the Red-throated Loon, which nests in small tundra pools. I'd never seen this bird in breeding plumage before. What a sight!... 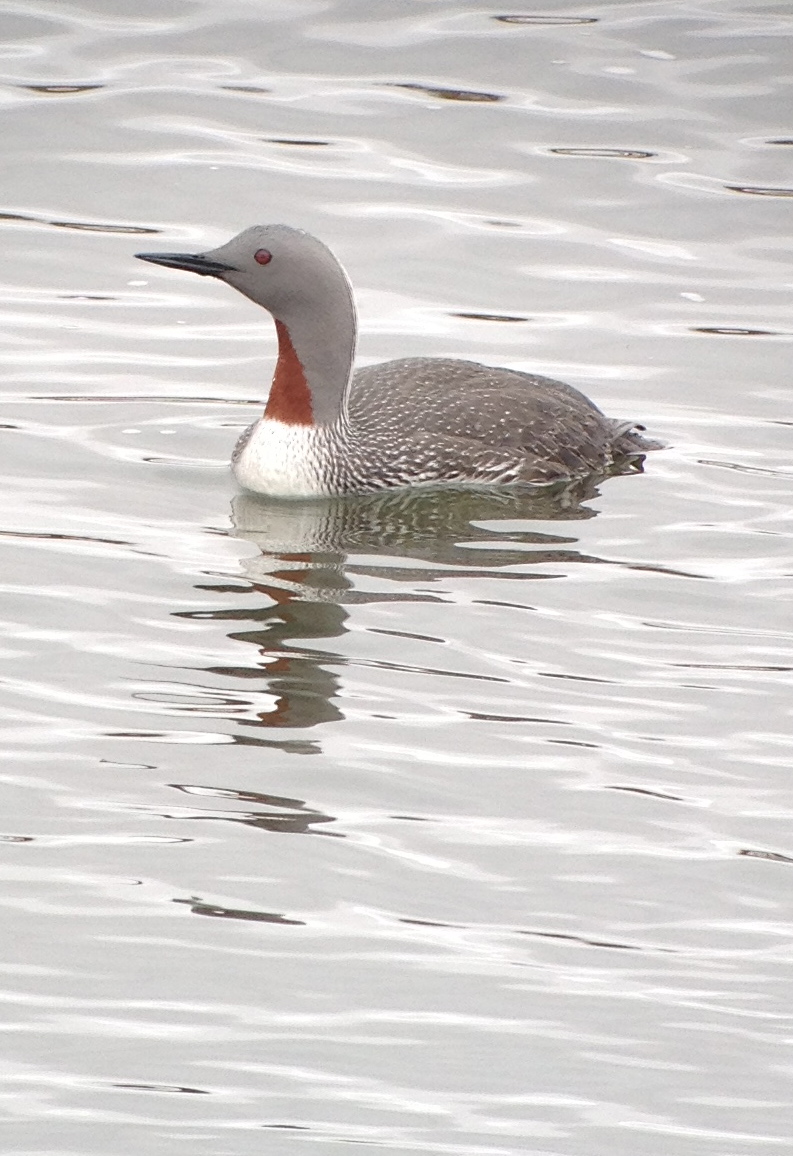 Many different species of shore bird breed here too, including Red-necked Phalarope: 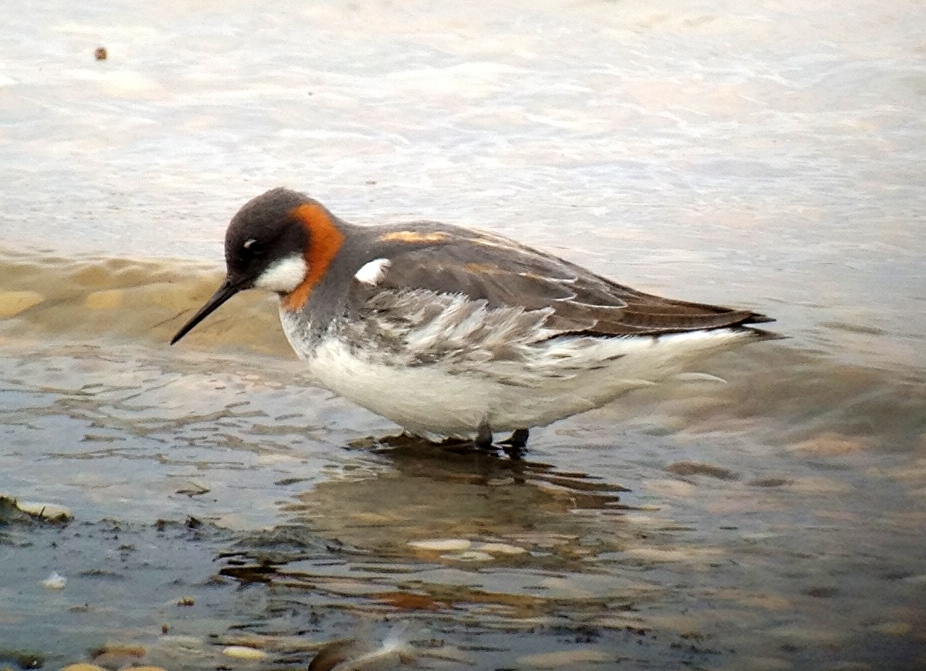 Red-necked Phalarope. In any sizable tundra pool we would find these birds spinning around picking insects off the surface. Sexual dimorphism is reversed in this group of shorebirds - the females are more brightly colored than the males. 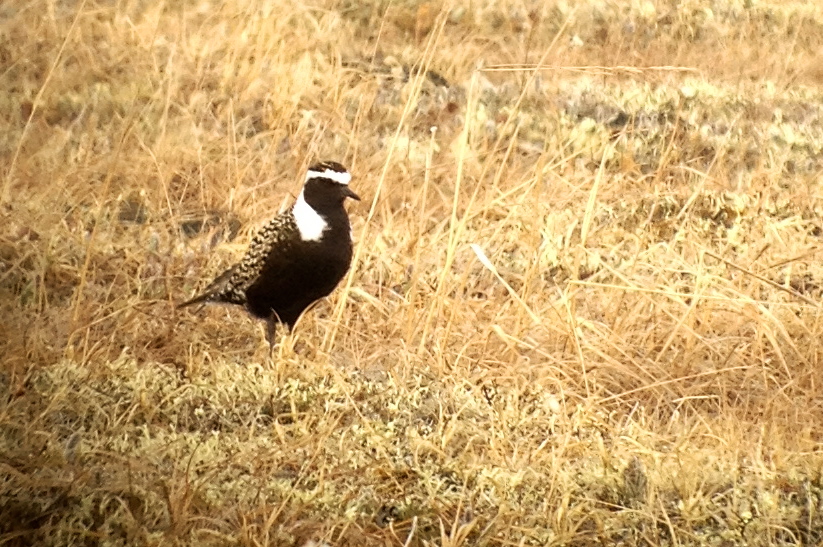 If you're in Nome, and driving any of the 3 roads, watch out for Willow and Rock Ptarmigan. The combination of (1) liking to stand on the road, (2) being very tame, and (3) being extraordinarily lazy (they walk slowly, and rarely can they be bothered to fly) makes them a road accident waiting to happen (or that day's dinner.) They may be stupid, but they're very cute… 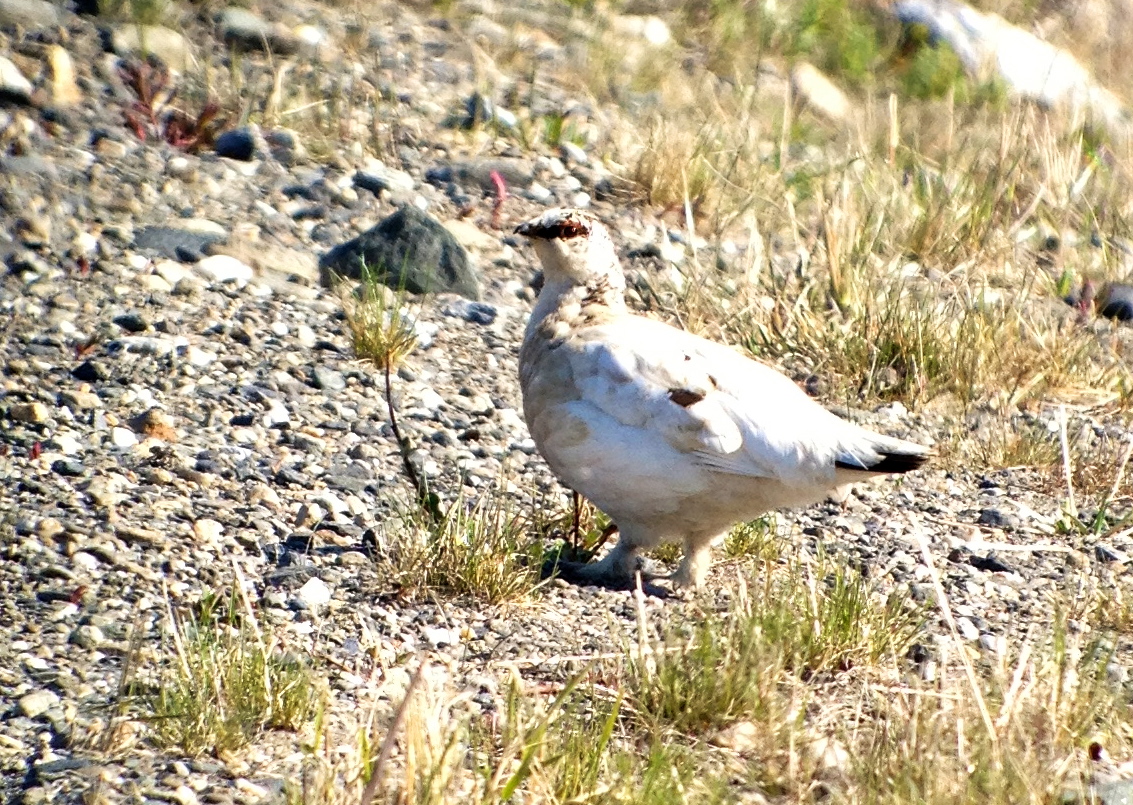 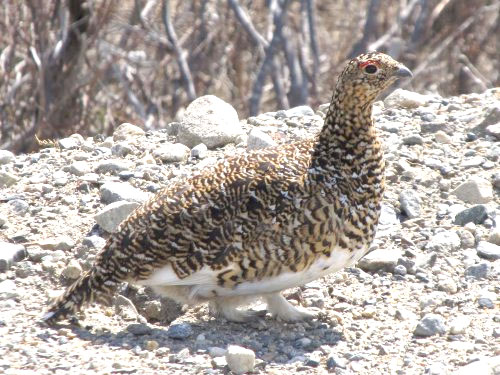 Female Willow Ptarmigan - great photo by Hans (taken from inside a warm car!)

Both Ptarmigan have a bright white winter plumage that helps them blend into the snow. Right now, they're molting into their browner summer plumage.

Nome is home to some Trans-Beringian migrants. Many were just arriving from Russia to spend the summer here. We had great views of Arctic Warbler that involved hacking into some dense (and thankfully Grizzly Bear-free willow tundra). But the best bird had to be the Bluethroat. These birds sing from the air while "parachuting" down to the ground. 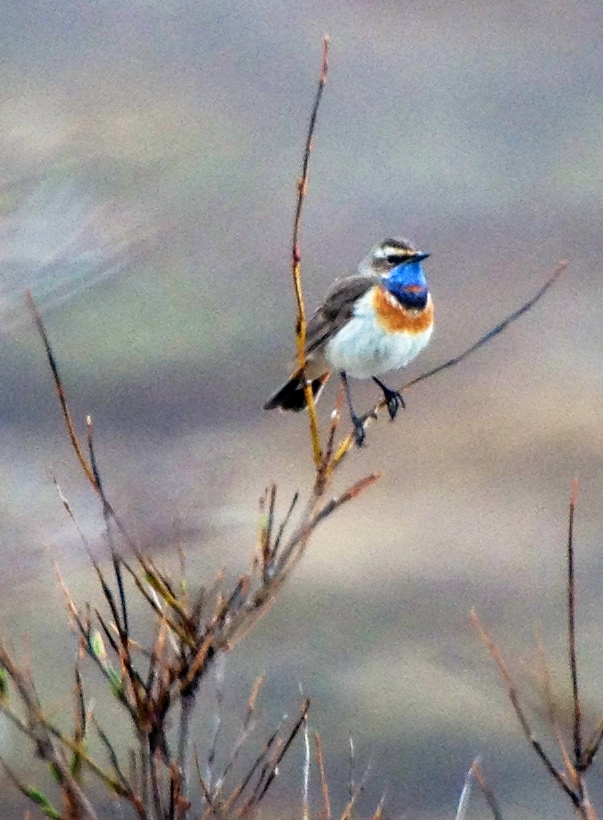 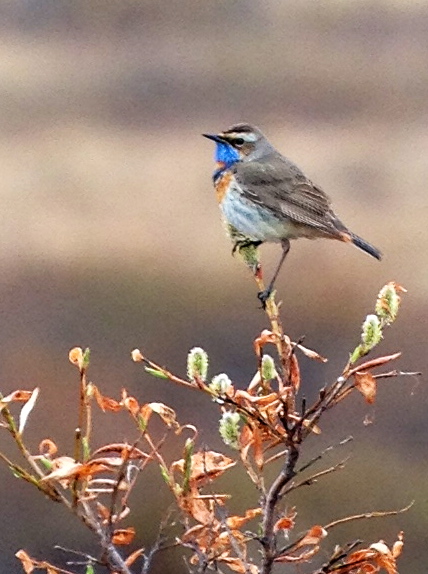 Bluethroat. Obviously!
(Thanks Rich Cimino for the location tip.)

One of the rarer breeders here is another Eurasian bird - the White Wagtail. We were lucky to find two at the Sinuk River on the Teller Road: 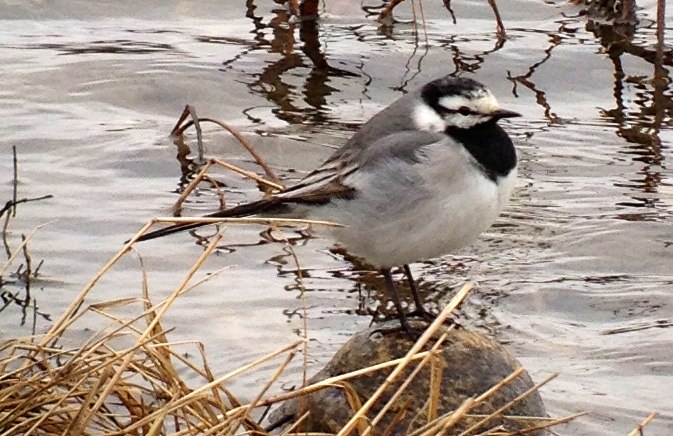 White Wagtail - this is the gray-backed subspecies ocularis.
Note the pale back and black line through the eye

Among all the handsome breeding birds, one of my favorites had to be the Steller's Eider. These guys aren't easy to find - they hide among the sea ice: 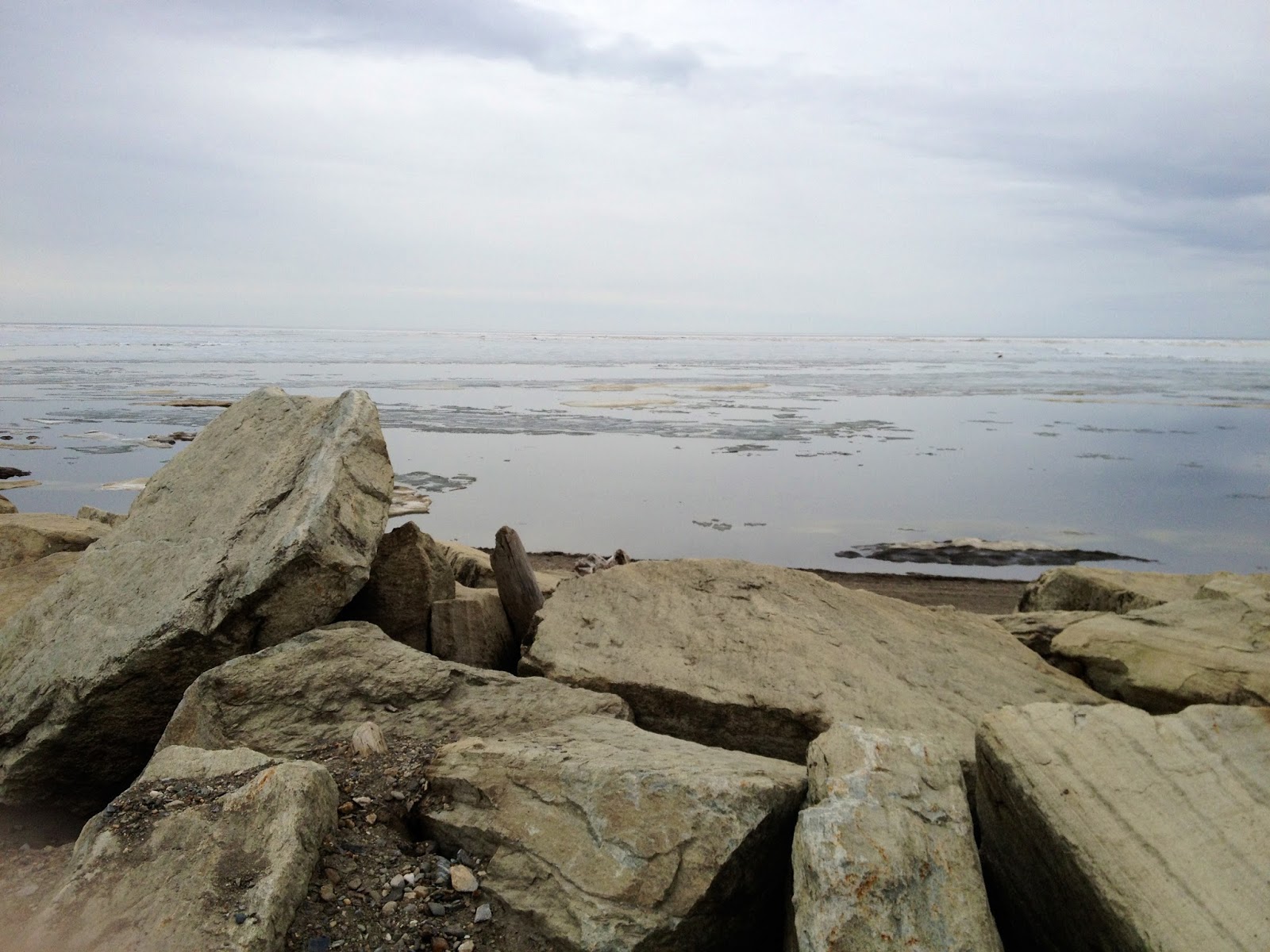 It's thought that during the winter, their body heat melts a small hole in the pack ice - which is enough for them to fish.

This being Alaska - there was lots of non-bird wildlife too. Like this moose, loose in the tundra... 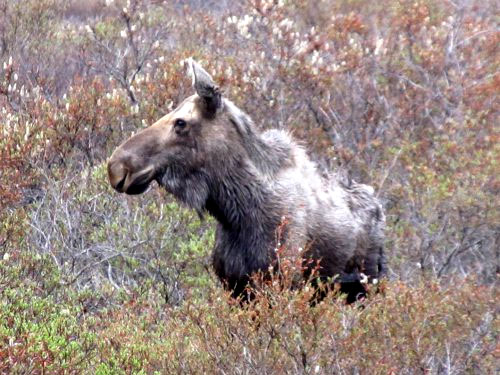 And Muskoxen. We came across this baby Muskox, all on its own. Hopefully the mother was somewhere nearby... 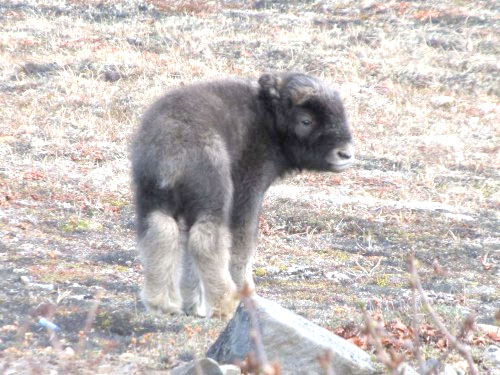 And this less than wild animal... 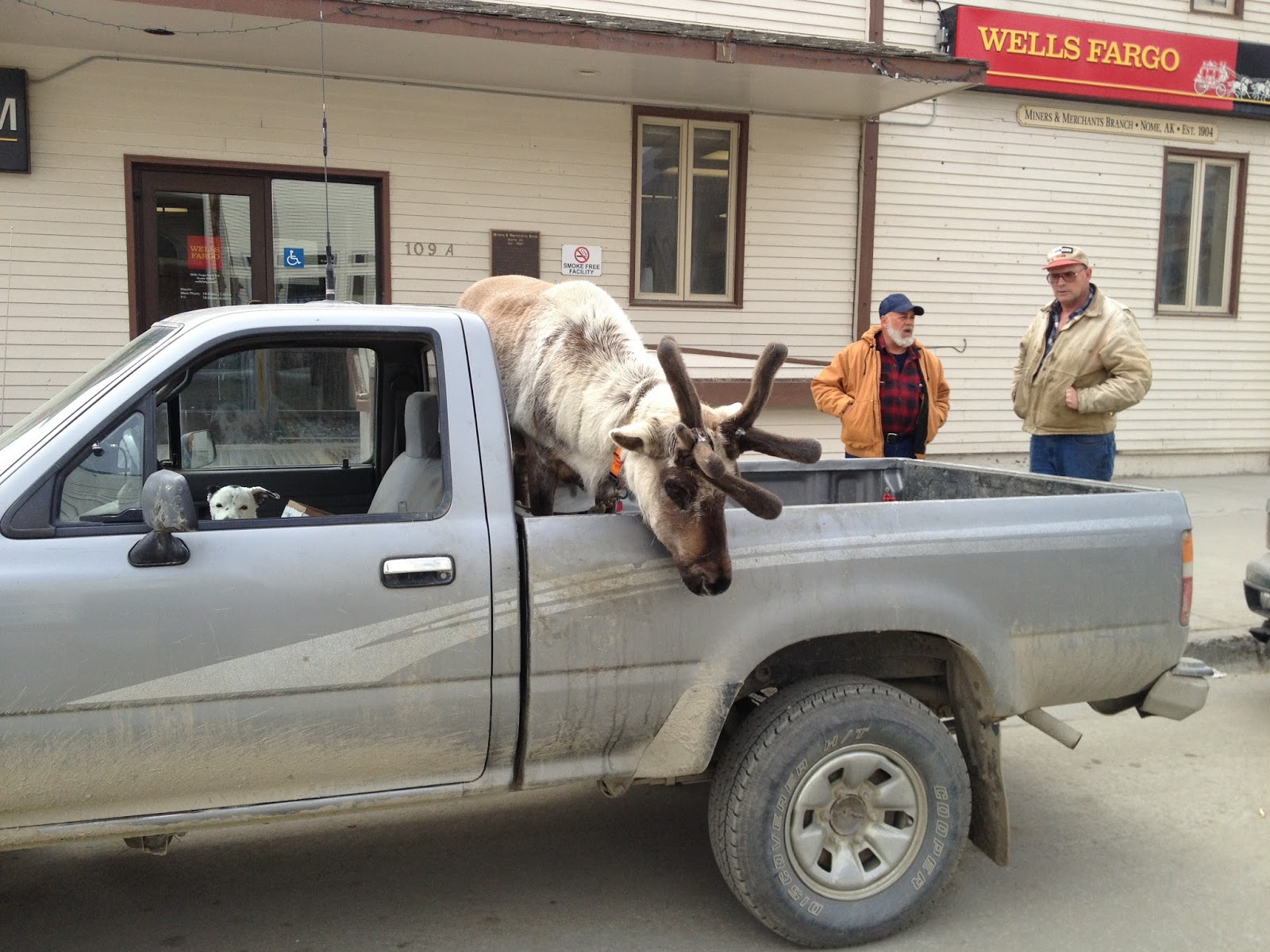 "Velvet" - the reindeer. A local celebrity.
(and yes, her antlers were very velvety)

The last day we had miserable weather - for humans, but great for rare birds! Coming out of an afternoon nap (we'd got up at 5:30 that day for the Bristle-thighed Curlew) I looked out my hotel window and spotted a Yellow-billed Loon swimming in the harbor. It would be the final year bird of the trip for me. We narrowly missed Spectacled Eider that Abe and Joe found on the ocean, 10 minutes before we pulled up behind them! But it didn't matter. I'd seen such great birds here, in large numbers, in dazzling plumages, and in great company. It was wonderful birding with Hans, Abe and Joe - I learned a lot, and laughed a lot. I was sad to leave. 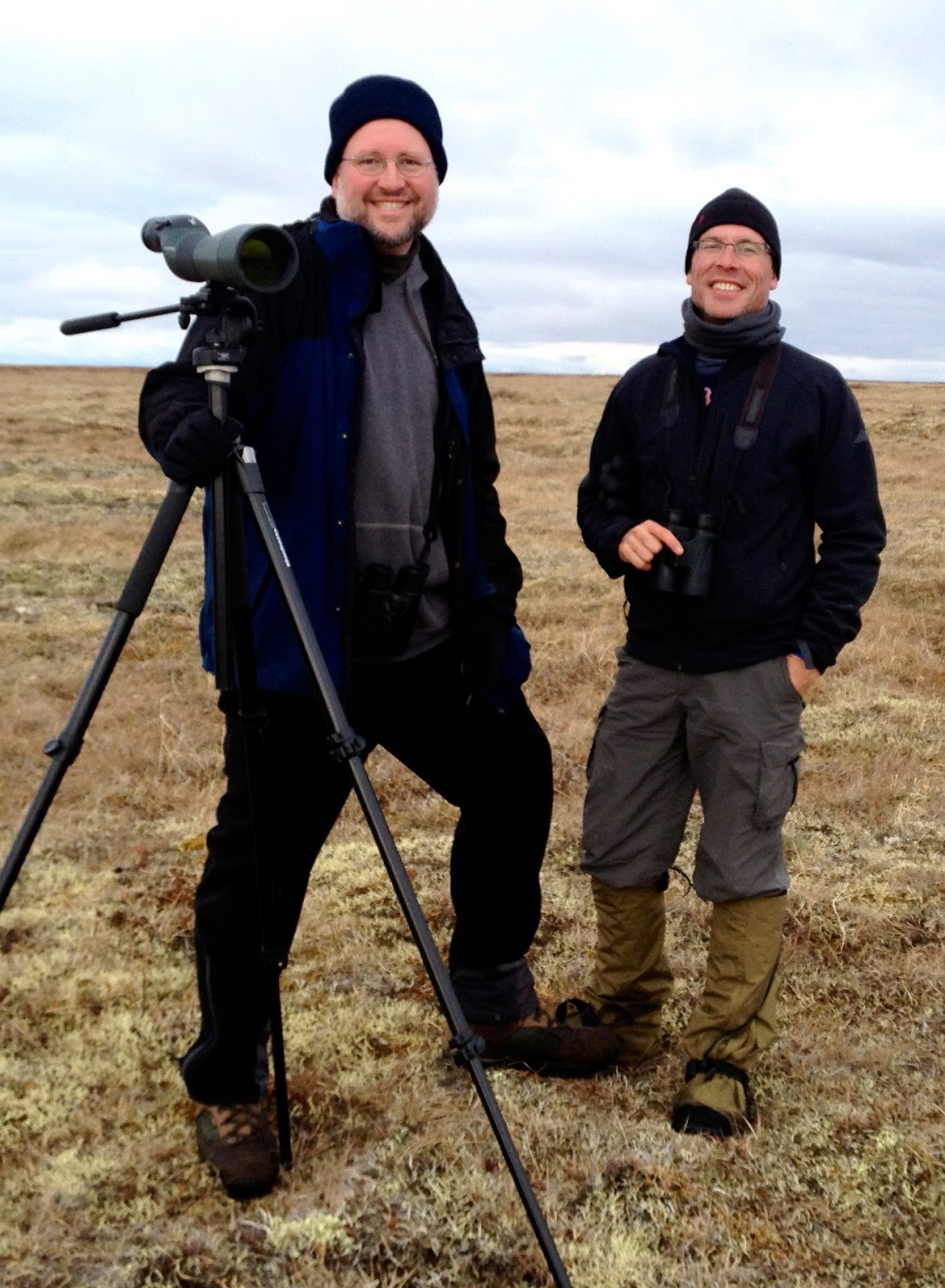 Hans de Grys and Neil Hayward - two Big Year Birders.
Or two men with too much free time on their hands!


A big thanks also to Aaron Lang from Wilderness Birding for birding location tips around Nome.

I've been on the road for about a month now - and probably look and smell like it too. I'm excited to finally head home to Boston (the real Nome Sweet Nome), but not before a night in Michigan - a one-bird stop for Kirtland's Warbler...