SPRUCED UP IN VERMONT

This is the kind of birding I like - you arrive at your destination, and there's a sign warning you that your target bird is in the area. With photos! *And* telling other people not to shoot it! 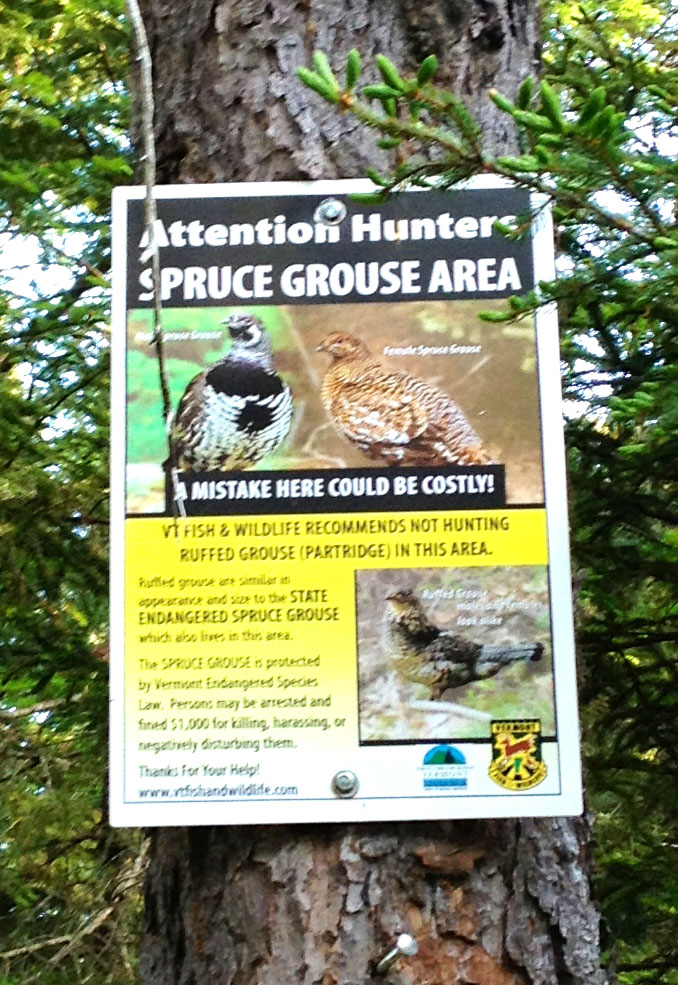 Certainly a lot more welcoming than New Hampshire, through which Gerri and I have just driven. The state motto "Live Free or Die" sounds relatively lame compared to this welcoming sign... 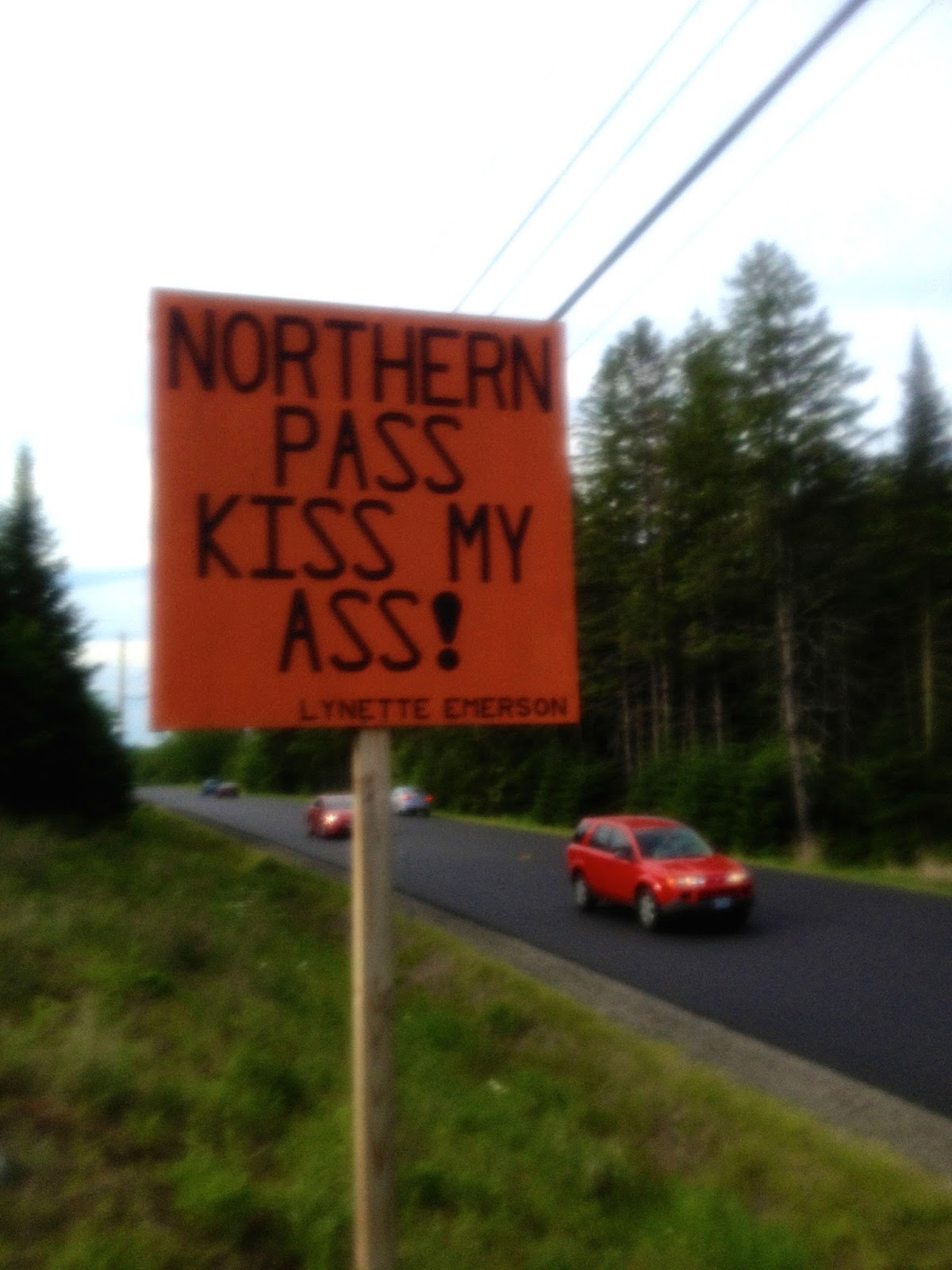 I'm at Moose Bog in the Northeast Kingdom of Vermont - less than 30 minutes from the Canadian border. I'm here to work on my grouse. This is an annoying group of birds - largely because they're so unpredictable and darn difficult to find when you're looking for them. Depending on the species the strategy can involve driving slowly for miles around mountains, woodlands, or fields. Or doing all that on foot. Although the habitats are different, the one constant with all grouse seems to be doing the above as early in the day as possible. Which, of course, means getting up really early.

Even though it's "only" 3.5 hours from home - I didn't like the prospect of a 2:30 am start, so we stayed in a cheap motel in NH. I've found there's an inverse correlation between the cost of accommodation and the number of hand-made signs (and often the grammar and overall legibility.) This was a cheap place... 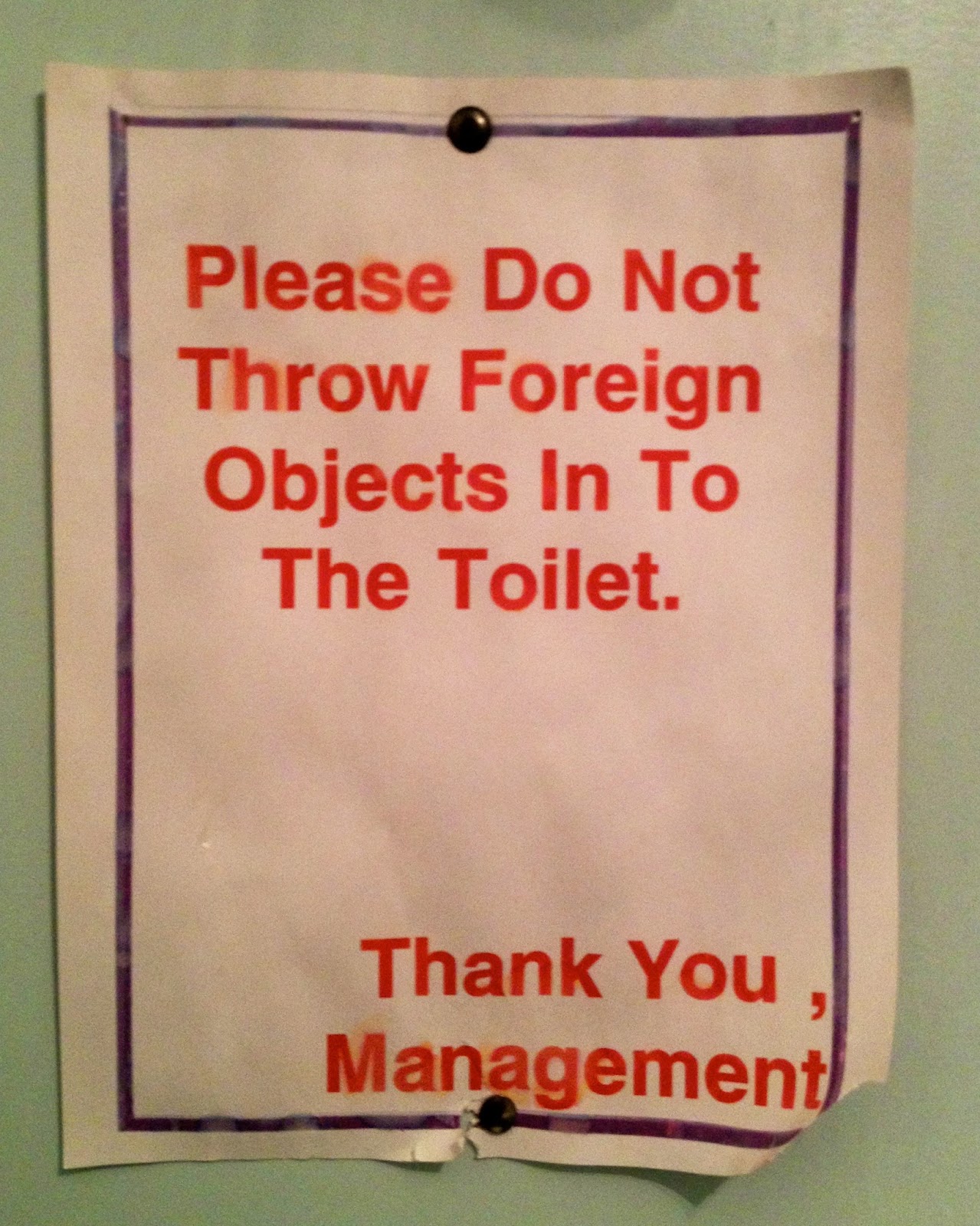 So - throwing domestic objects in there is ok?...The owners didn't seem to appreciate the made-in-America TV that I tossed in as we were leaving. Guess that's Living Free in New Hampshire!

Moose Bog is home to the Spruce Grouse, an endangered bird in Vermont. It's a boreal species, and round here this is about as far south as they range. A short (3/4 mile) and very narrow trail winds through dense spruce forest, softly carpeted with moss. 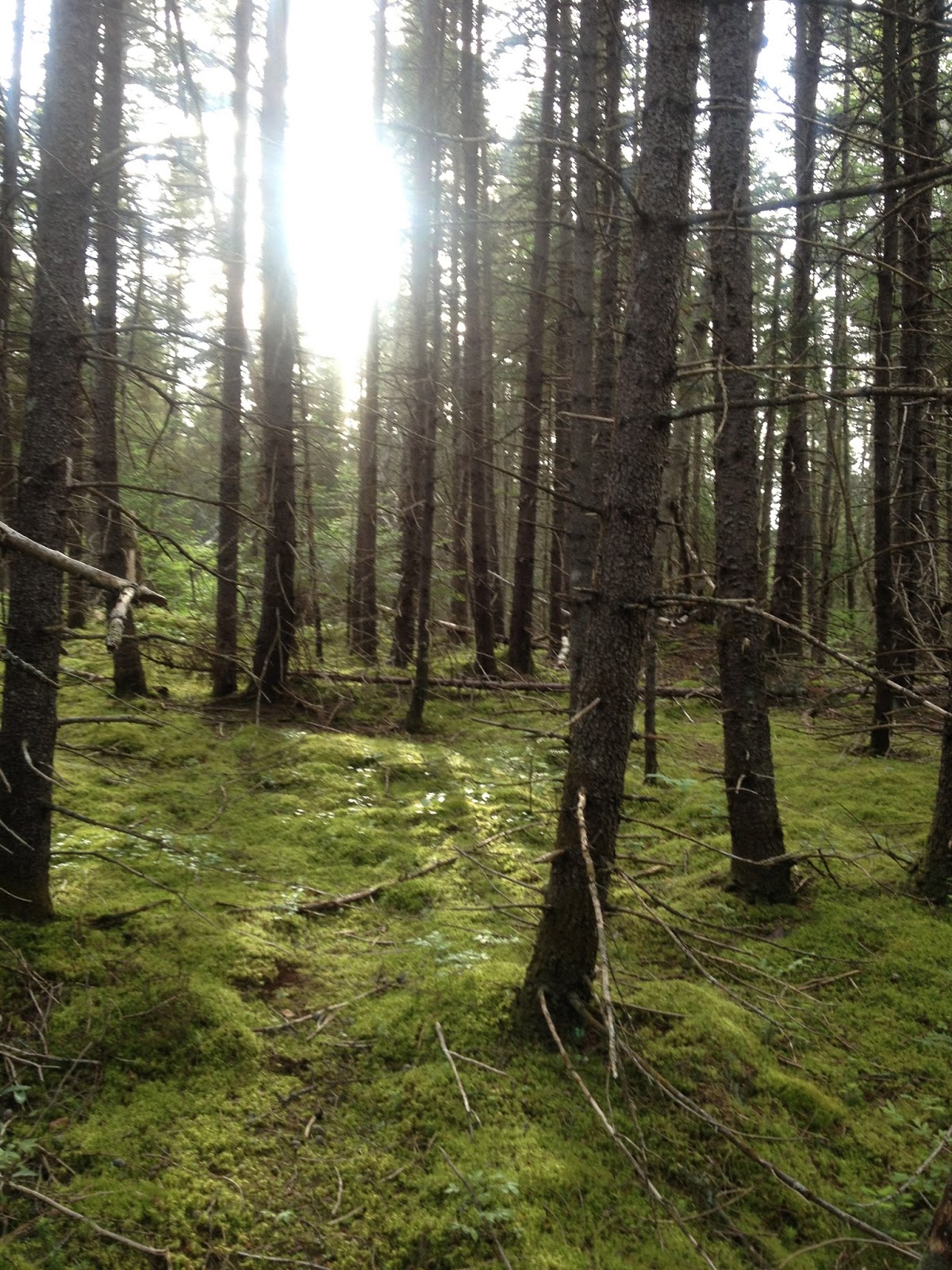 At this time of year, the delicate Lady's Slippers are blooming... 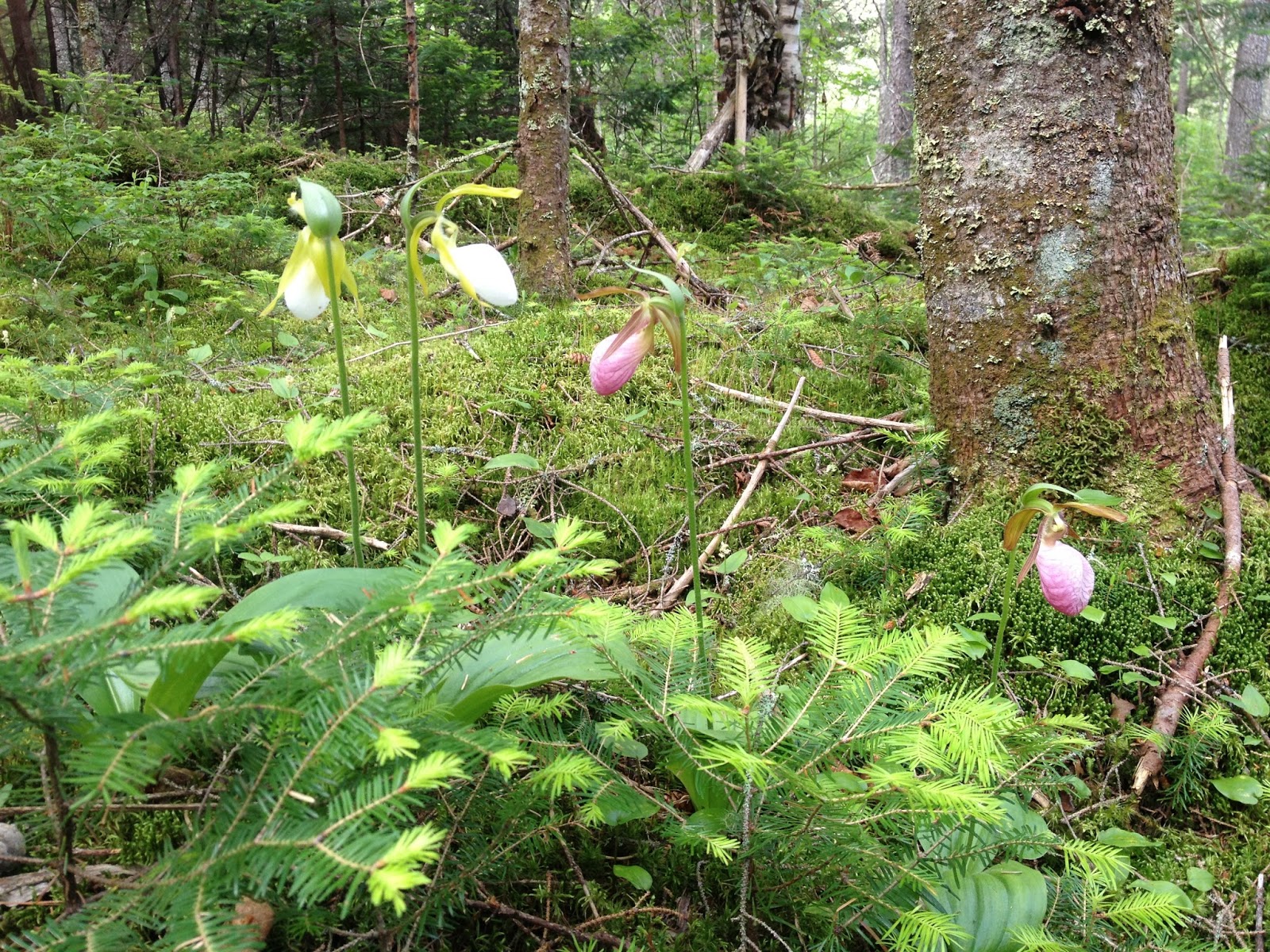 The grouse walk through this area slowly and silently. Your best bet for spotting them is to do the same. At the start of the trail a tiny Winter Wren belted out its tinkly song. Blue-headed Vireos chatted, and Blackburnian Warblers squeeked out their incredibly high-pitched song. We scanned the forest floor for movement - but nothing. I'd already mentally prepared myself for making this trip at least 3 times, figuring our chances were about 30%. Guessing that we'd miss the grouse the first time, I was treating this as a scouting trip.

As we moved towards the end of the trail, I caught some movement out of the corner of my eye. Something was walking behind a pile of logs. We waited and then a black-necked head popped up. Spruce Grouse! I couldn't believe our luck! It was very tame, and didn't seem to concern itself with our presence. 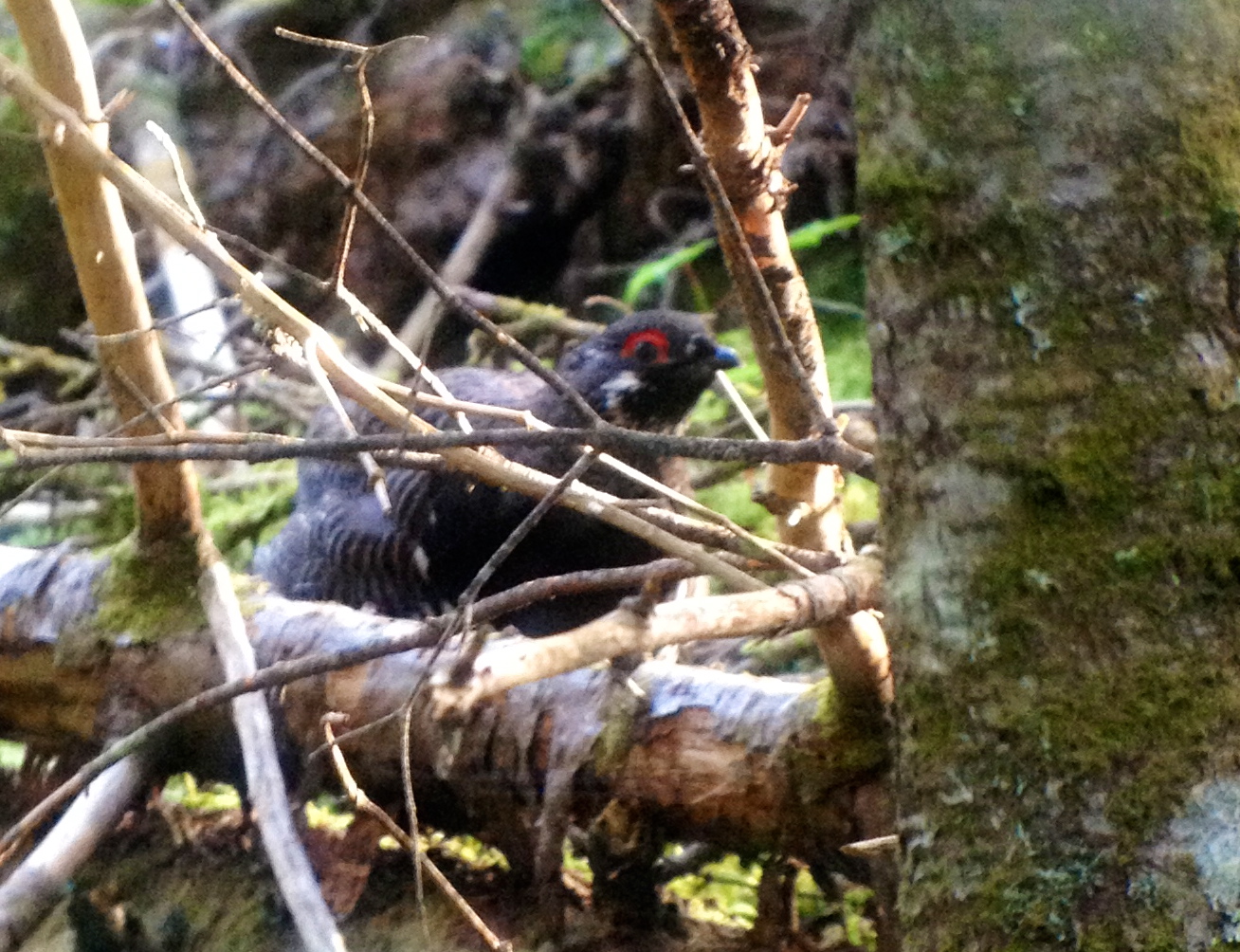 Um..we can still see you! 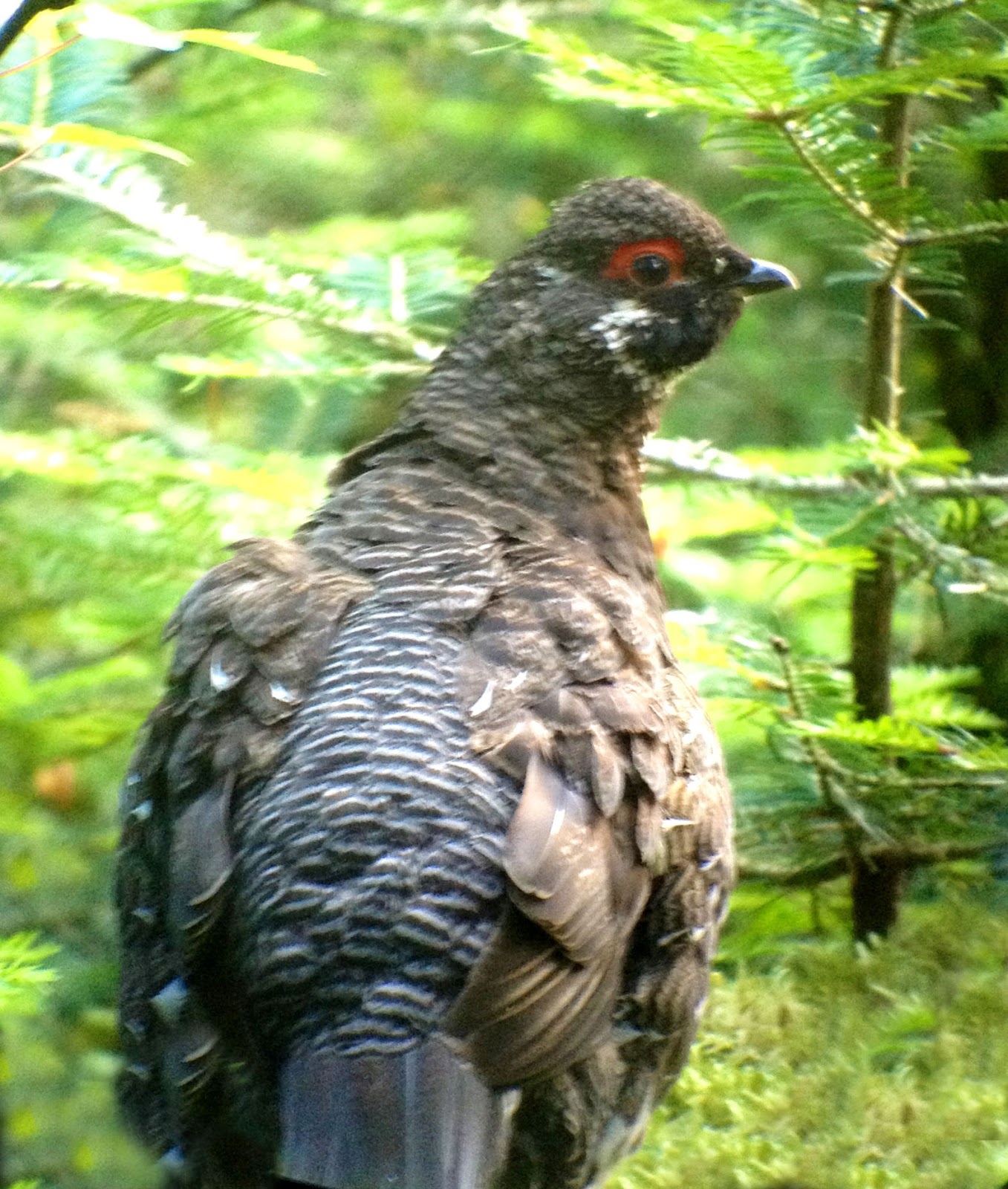 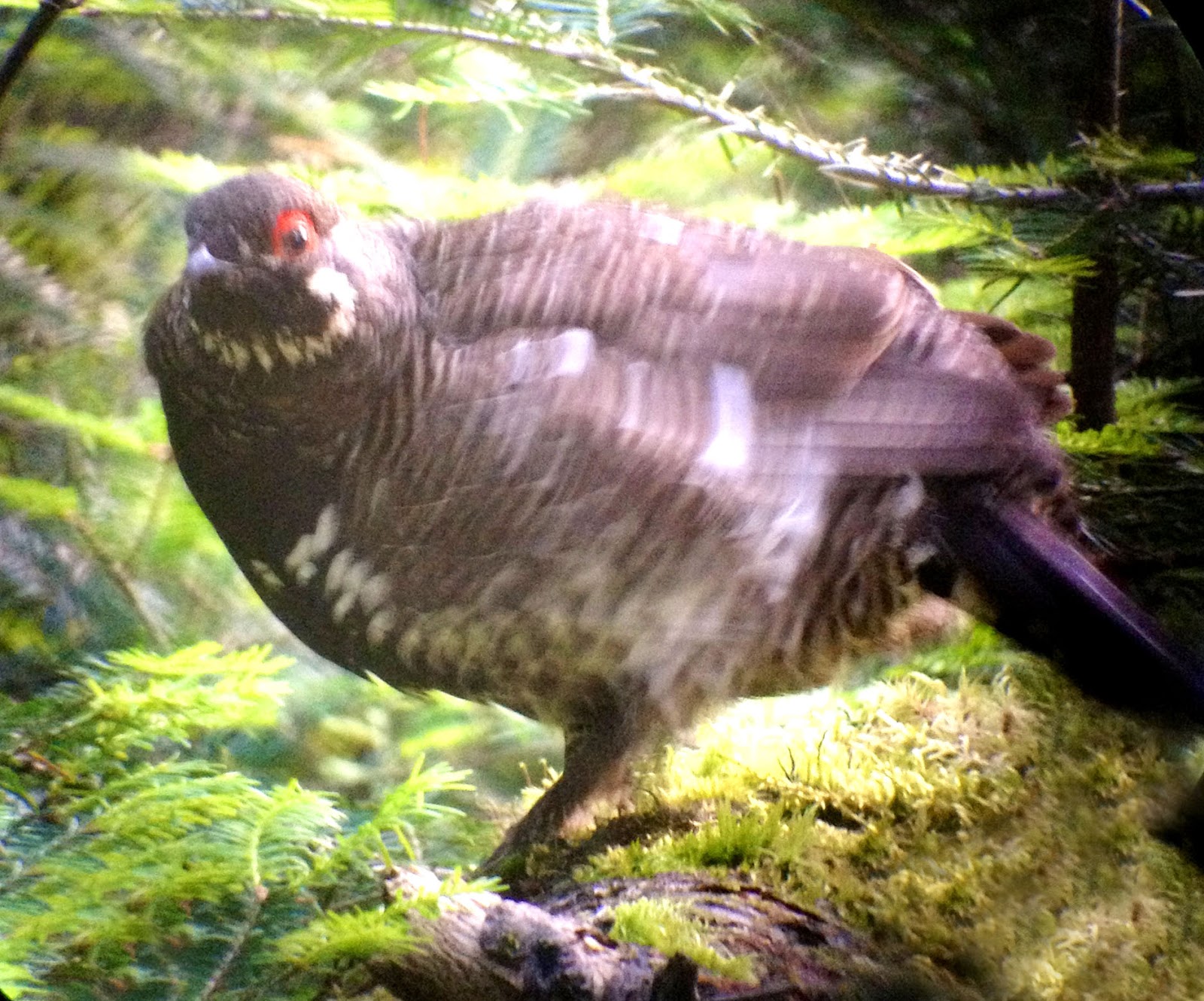 We watched the bird for 15 minutes, before it slowly walked out of sight. It was a magical morning in a beautiful part of the country. Thank you Liz Southworth for suggesting I try Moose Bog.

So - I'm feeling better about grouse than I'd have thought at this point of the year: I've seen all three Ptarmigan, Spruce Grouse, Ruffed Grouse, Dusky Grouse, Gray Partridge, Prairie Chickens and both Sage-Grouse. But I still have some tough ones left: Sooty Grouse (West Coast), Sharp-tailed Grouse (mid-west) and Chukar (???) Oh - and I'm debating whether to go for the ridiculous Himalayan Snowcock - an introduced bird found only at the top of the Ruby Mountains of Nevada. That's the place that offers helicopter rides to go see them!

We stopped for coffee on the way back in North Woodstock, which has some pretty interesting bathroom decoration... 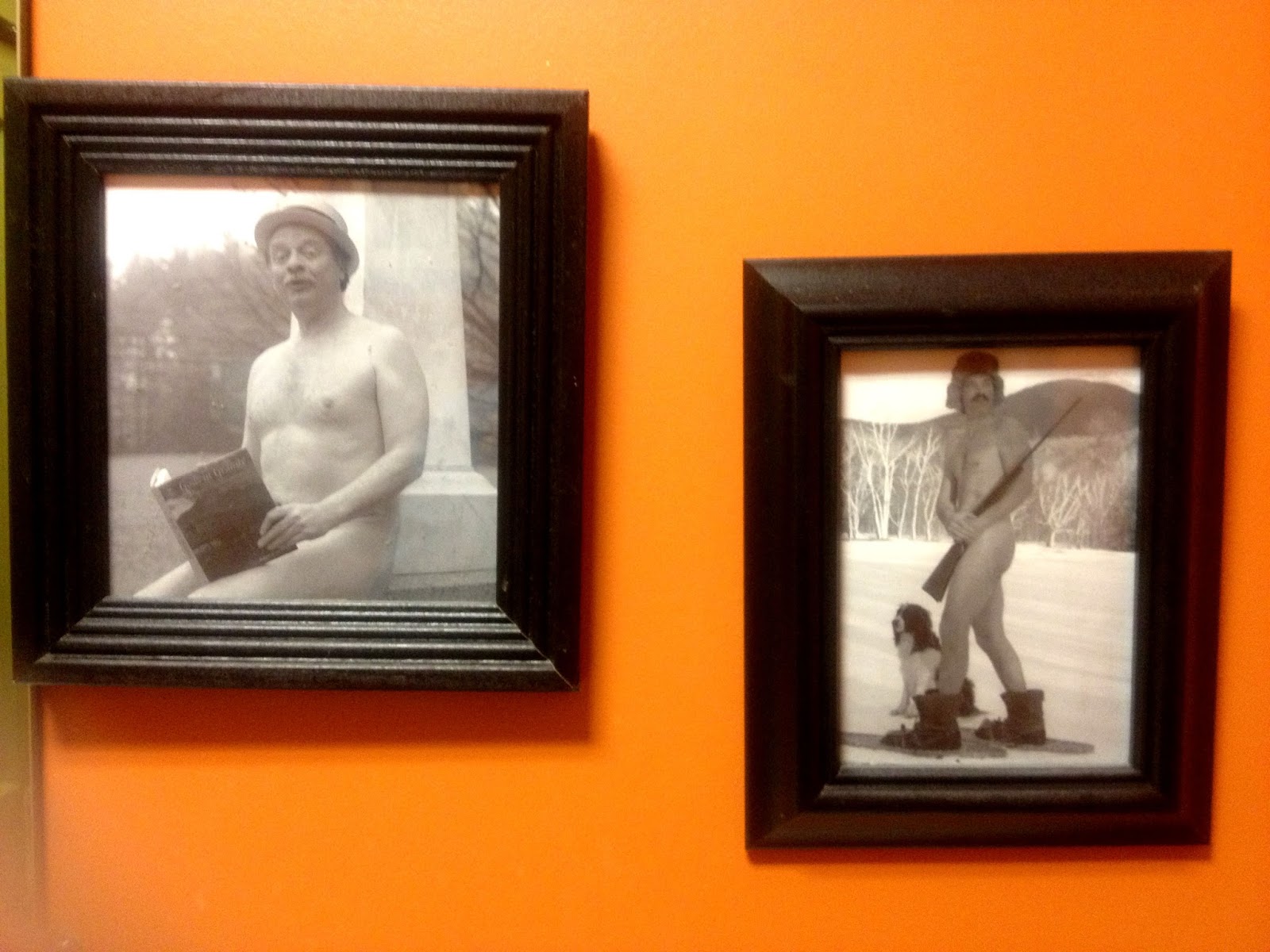 Looks like the guy on the right
really did have a gun in his pocket and wasn't just pleased to see us...
+ + +