It's June, it's Detroit Airport, so I must be making the Kirtland's Warbler pilgrimage. This is a one-bird stop from Alaska on my way home - finally. It's was a logistical pain to get here: Nome - Anchorage - Seattle - (red-eye to) - Dallas - Detroit. After a month of travel, I'm beat. While I've made many long drives this year (26,000 miles of them), the simple 3 hour trip north from Detroit to Grayling was one of the hardest - I had to pull over and take a nap. In both directions!

But boy was it worth it!

Kirtland's Warbler is an endangered species - it nests only in Northern Michigan (although a few pairs are now thought to nest in nearby states.) It's an ultra fussy bird: it only nests around Jack Pines, between 6' and 14', which have interlocking lower branches (to hide the nest), and dense ground cover. This early stage forestation was a lot more common before forest fires were prevented. The population crashed around the mid 20th century, and hit a low of around 400 individuals in the 1970s. Several groups, including US Fish and Wildlife, MI Audubon, and Michigan Dept. Natural Resources teamed up to reverse the trend. And they've been successful. There's now around 4,000 individuals in MI, and the birds are an important local tourist industry. That and Mixed Martial Arts… 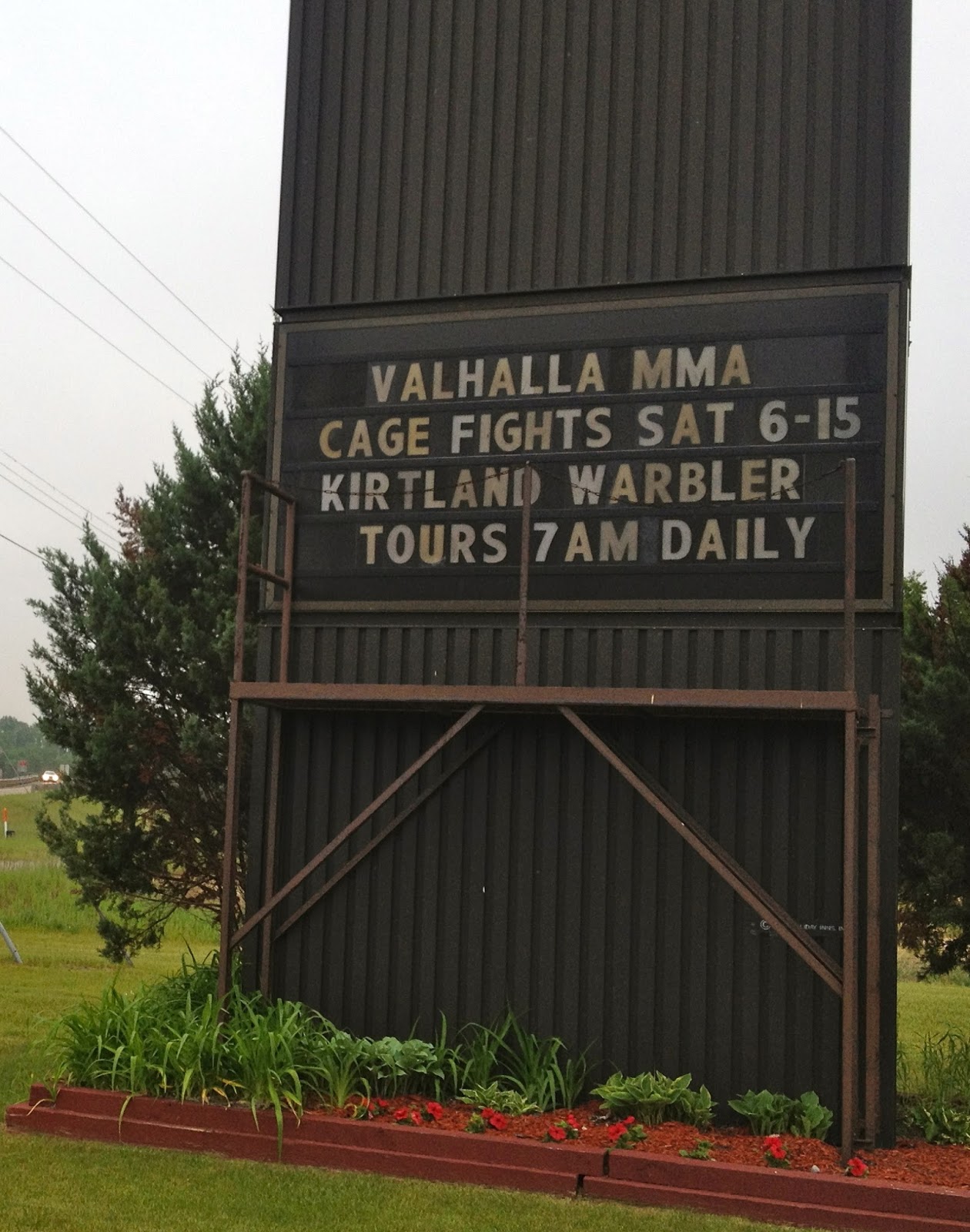 The Grayling Ramada Inn. To be clear, I was here for the Warbler Tours!

The largest breeding population is centered around Grayling, MI. I arrived late afternoon in the sandy Jack Pine habitat. 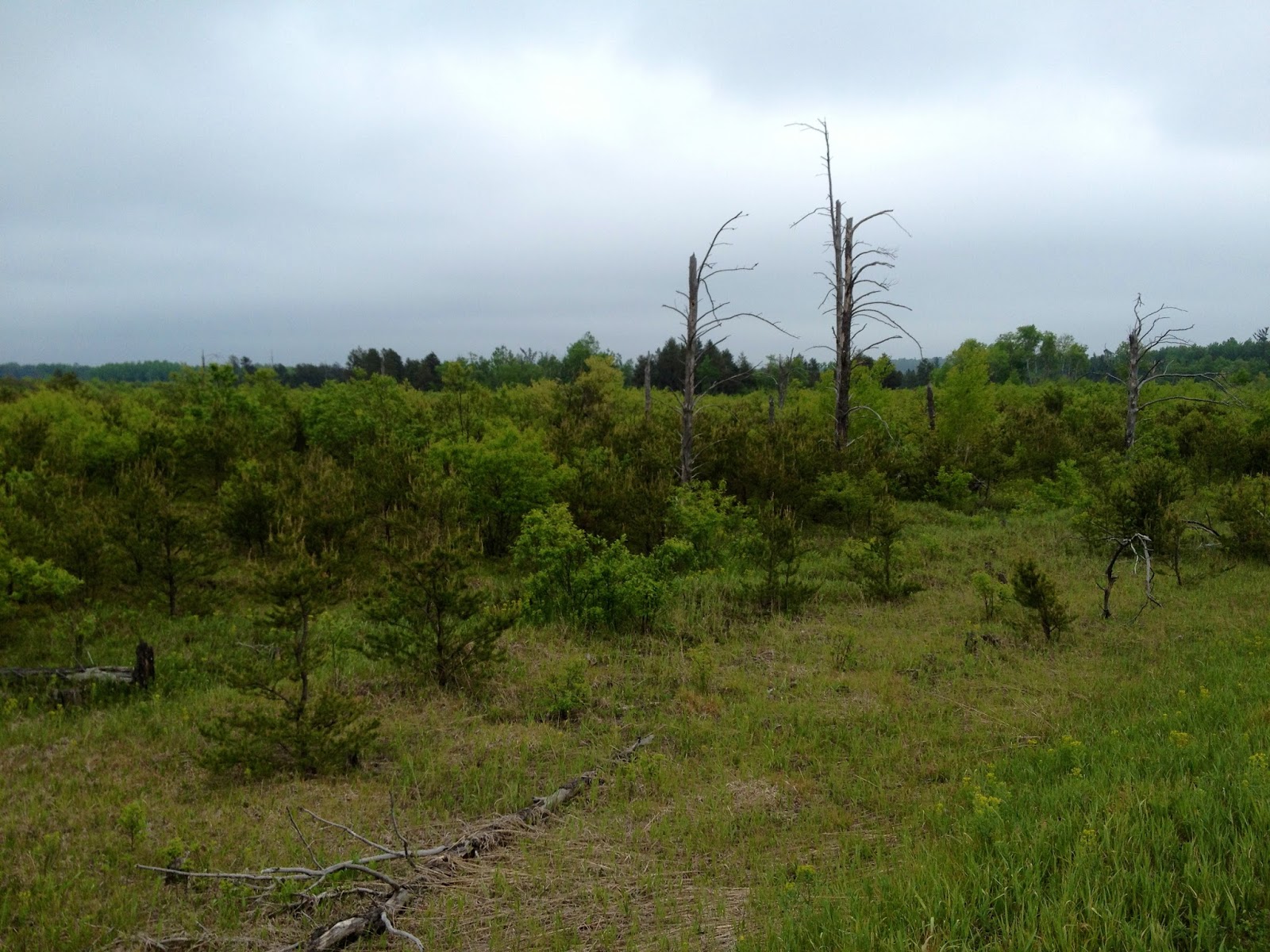 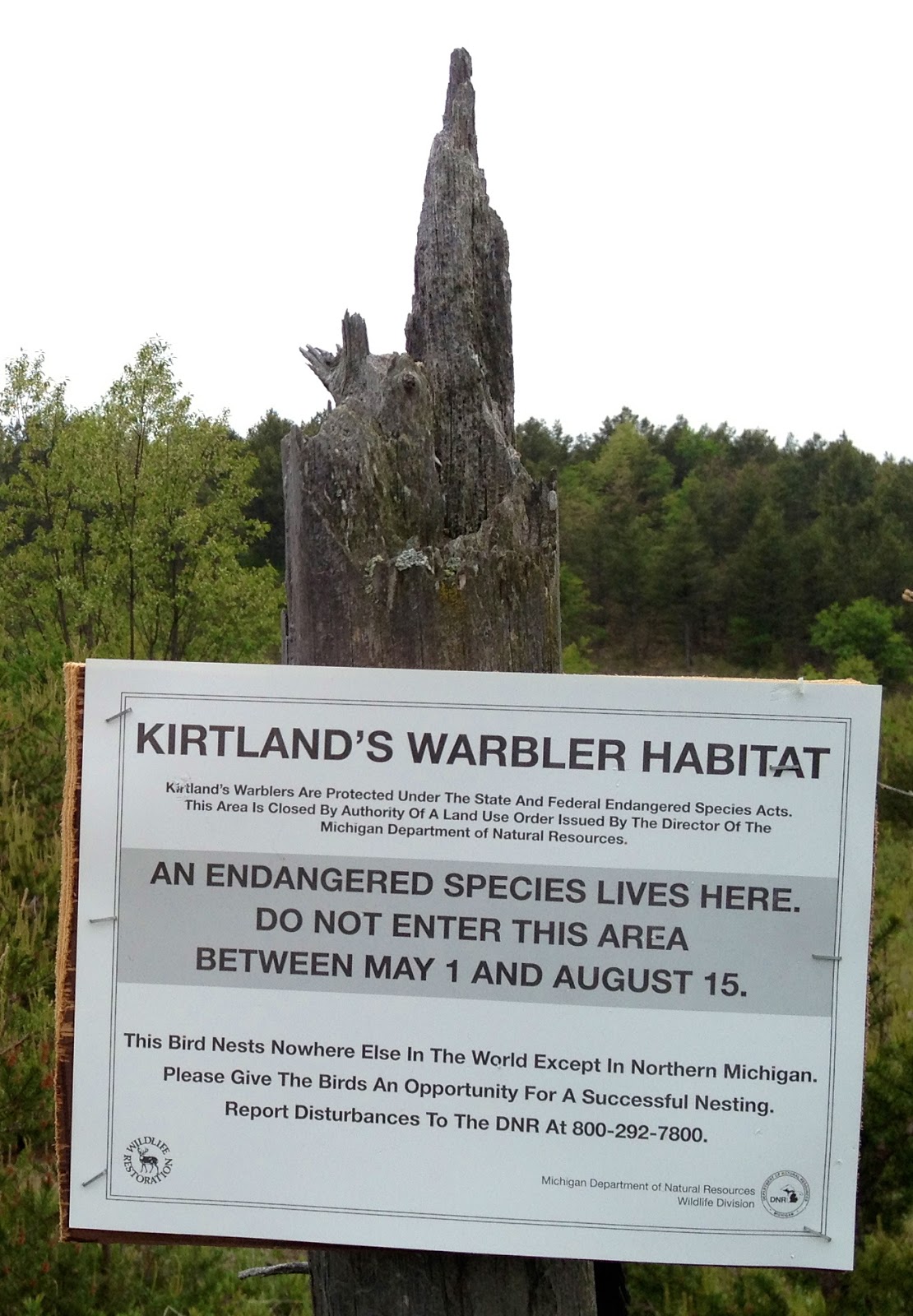 It wasn't long before I heard the distinctive song of the Kirtland's - chip-chip-chip-too-too-weet-weet. For a brightly colored bird, they're surprisingly well hidden. It took me some time to spot one: 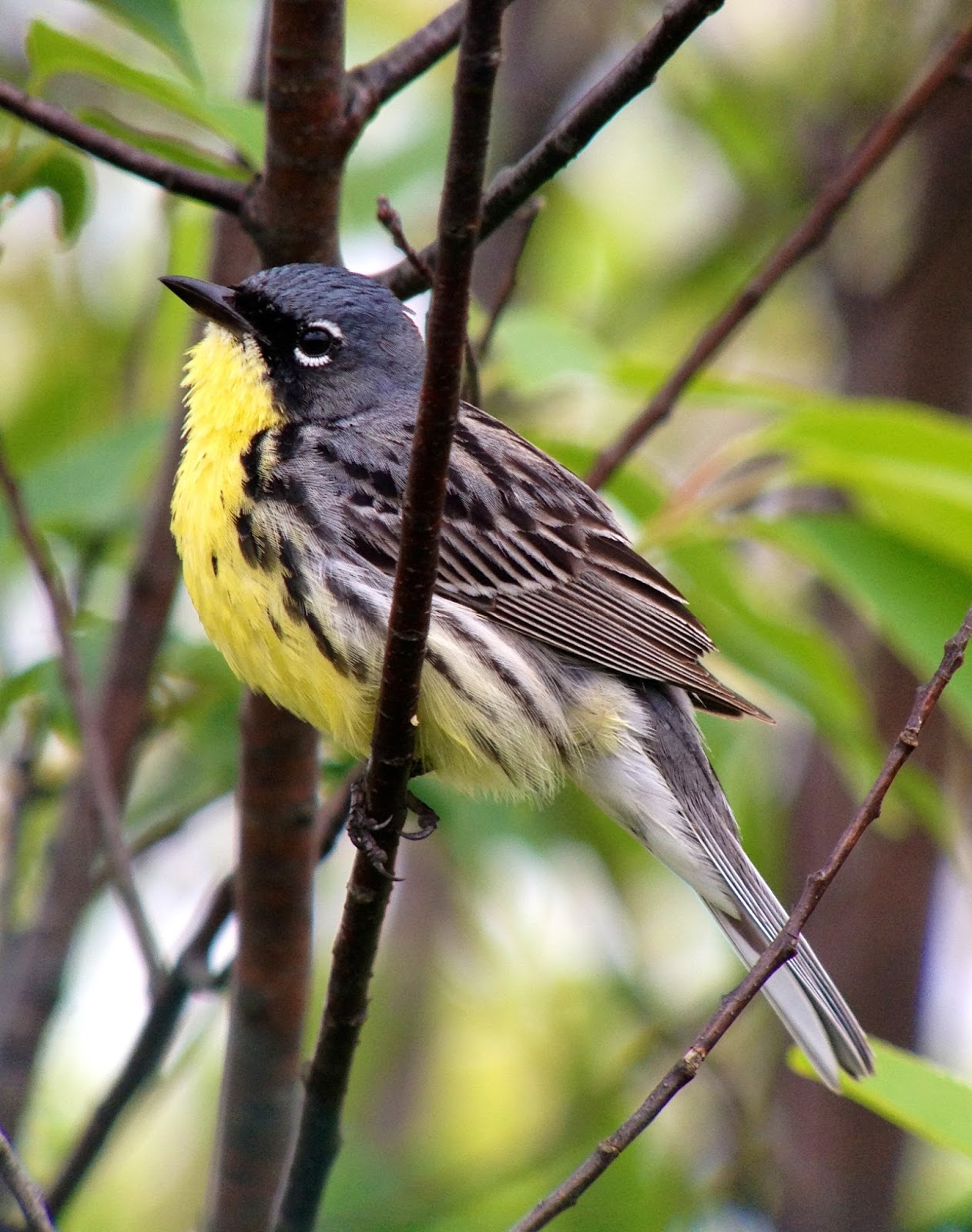 Kirtland's Warbler - notice the broken eye-ring, blue-gray head,
black lores (area between the bill and the eye), bright yellow underparts,
and streaking on the flanks. This is a male. Females are probably on the nest now
and are a sightly paler version of the male.

The birds throw their heads back when singing… 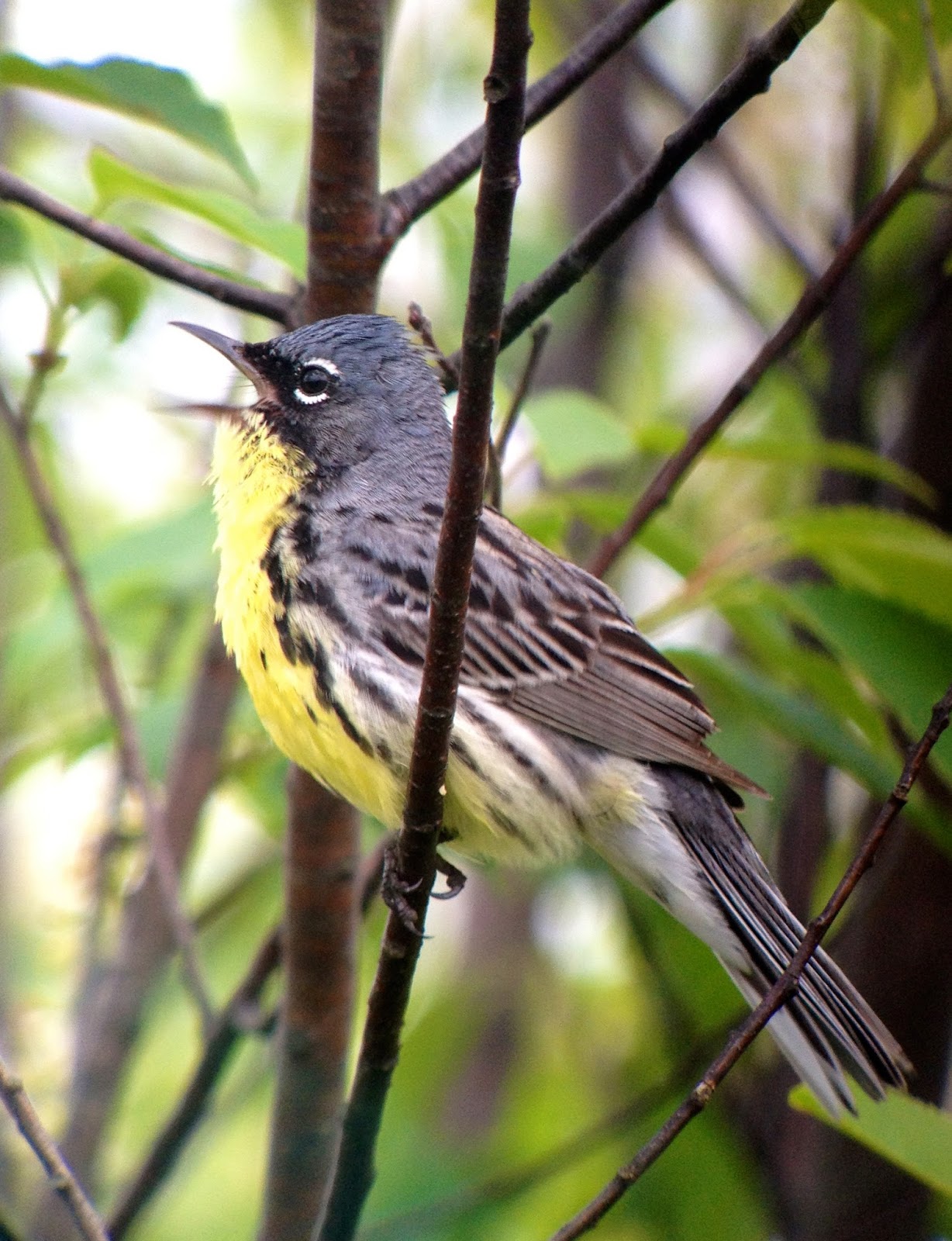 I went on the free Fish and Wildlife tour the next morning, which was very educational. This was given by Megan, whose job it is to "remove" Brown-headed Cowbirds from the warbler breeding grounds. As well as suffering habitat loss, the other major factor in the decline of the birds is predation by cowbirds. Previously restricted to the southern plains, this bird has moved north as the forests have been opened up. The Kirtland's were simply not prepared. The cowbirds lay eggs in the warbler nests and often remove one or more of the host eggs. The poor warblers can't tell the difference between their own chicks and the massive cowbird chicks. The latter often throw out warbler chicks from the nest or out-compete them for food, reducing the warbler breeding success still further. 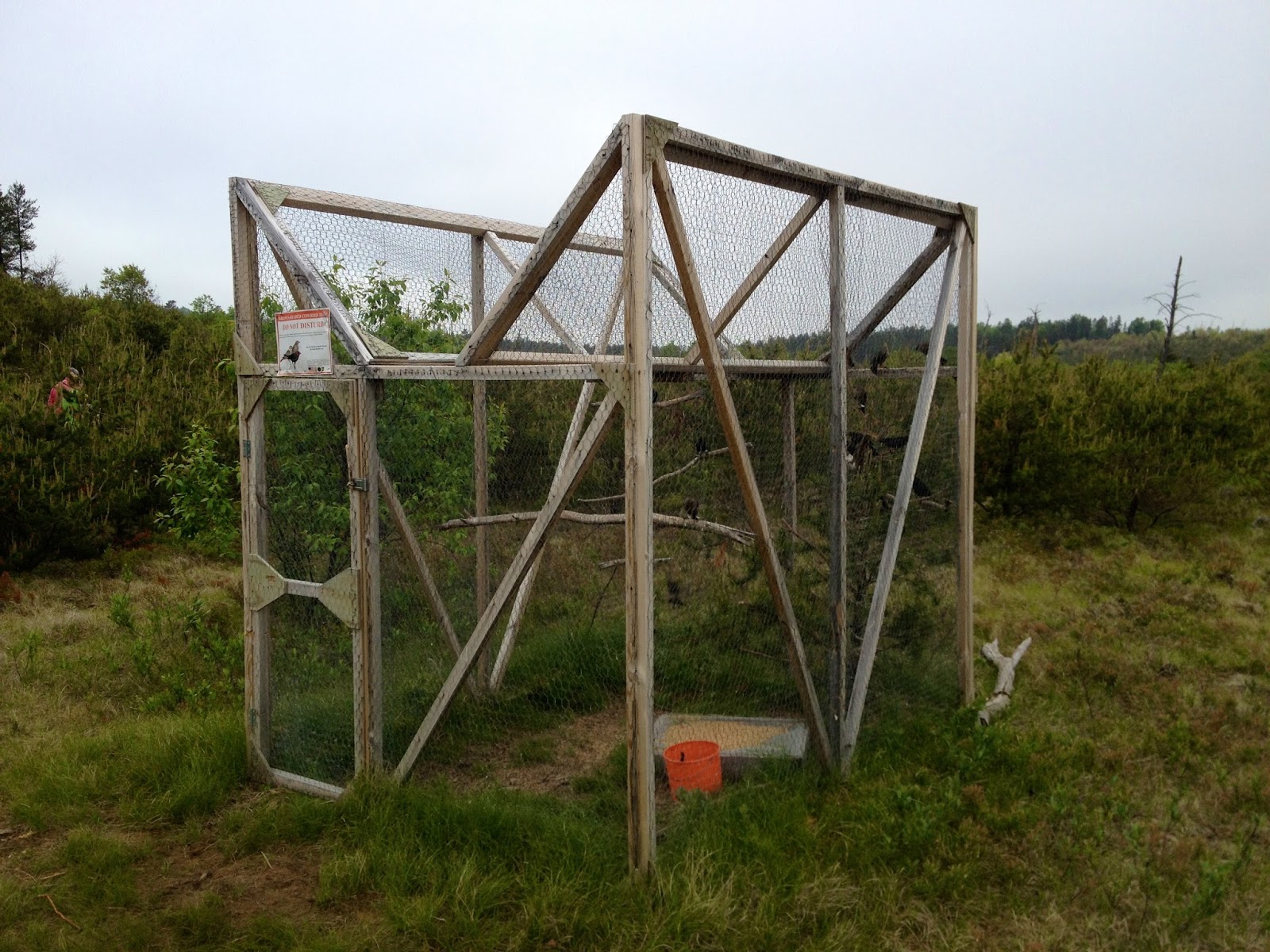 The mesh wire structure contains about 20 cowbirds which act as bait: 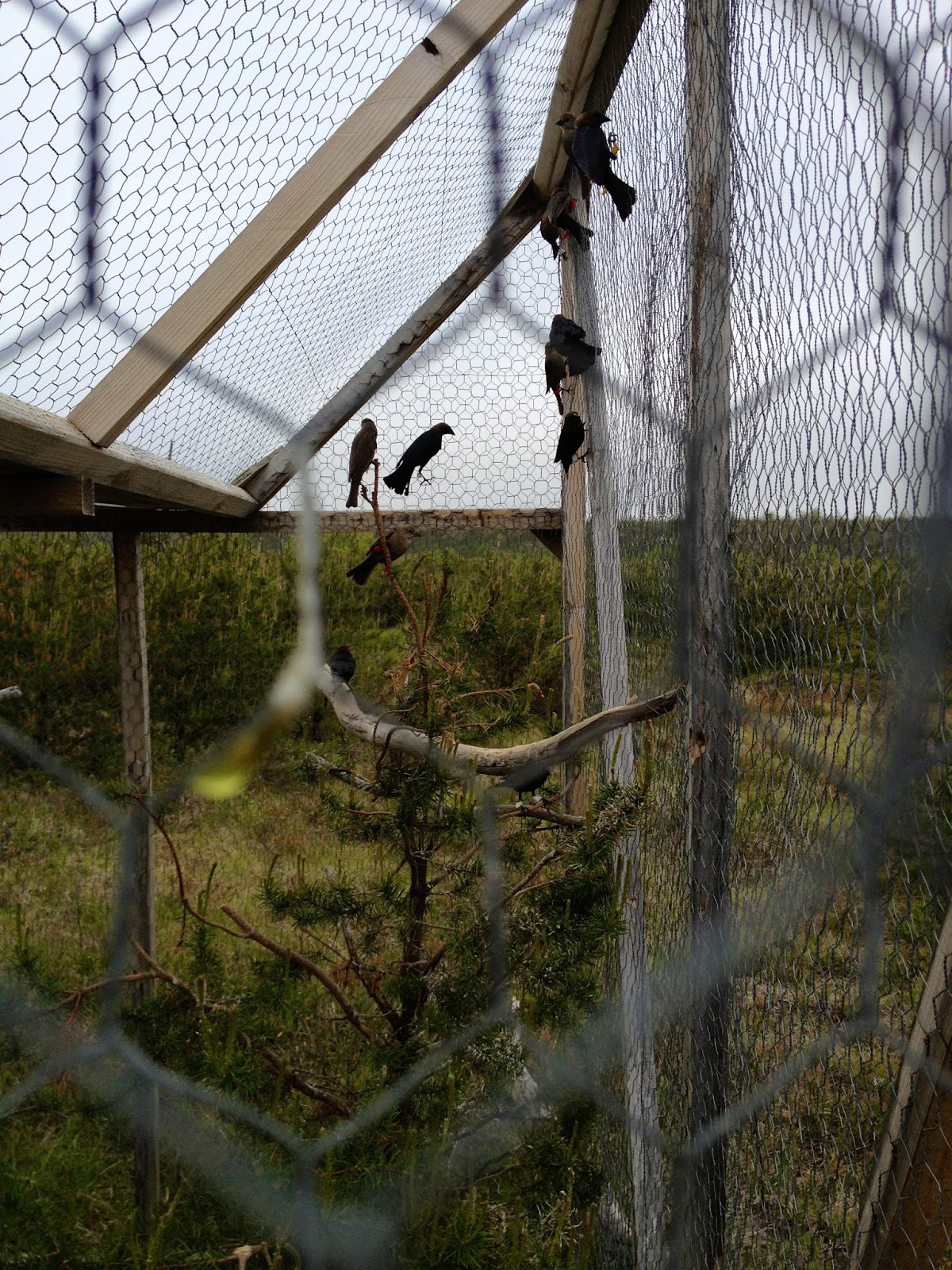 Cowbirds fly into the trap through a hole in the ceiling, but are unable to fly out. New birds are removed daily and destroyed. Using multiple traps like this, about 4,000(!) cowbirds are killed every season. With this combination of significantly reduced cowbird parasitism, and better land management (a rotation of logging to always provide trees of the right age and size) the Kirtland's Warbler has come back from the brink of extinction. Thankfully, their fussiness only extends to breeding - once they get to their wintering grounds in the Bahamas they don't seem to care about the size of the trees or whether the lower branches are touching the ground - they're probably just thinking, hey, it's the Bahamas!

It was a real treat to see these birds, and the efforts that have gone into saving them. You can tell the locals are very proud - there are Kirtland's signs all over the place, business named after them, and all the school kids get to learn about their special bird. The state is even considering changing their state bird from (the ridiculous and widespread) American Robin to the Kirtland's Warbler. [If you haven't read Nicholas Lund's excellent and hilarious blog about state birds I'd recommend it - http://tinyurl.com/a8uzl8w]

Next time you're in the Michigan area over the summer, and have a free morning recovering from the Cage Fights the night before, I'd encourage you to pay a visit to this remarkable bird, and the even more remarkable work that has gone into protecting it.