The Great Dismal Swamp is clearly in need of some PR. How about some renaming - how about the Awesomely Cool Water Feature? or the Suffolk Lakeside Retreat? Either way, you can blame (or thank - since I saw no other humans on two visits this weekend) William Byrd II. He was responsible for mapping the swamp in 1728 while establishing the border between Virginia and North Carolina that runs through it, and for subsequently naming it. Clearly, the man wasn't a fan. 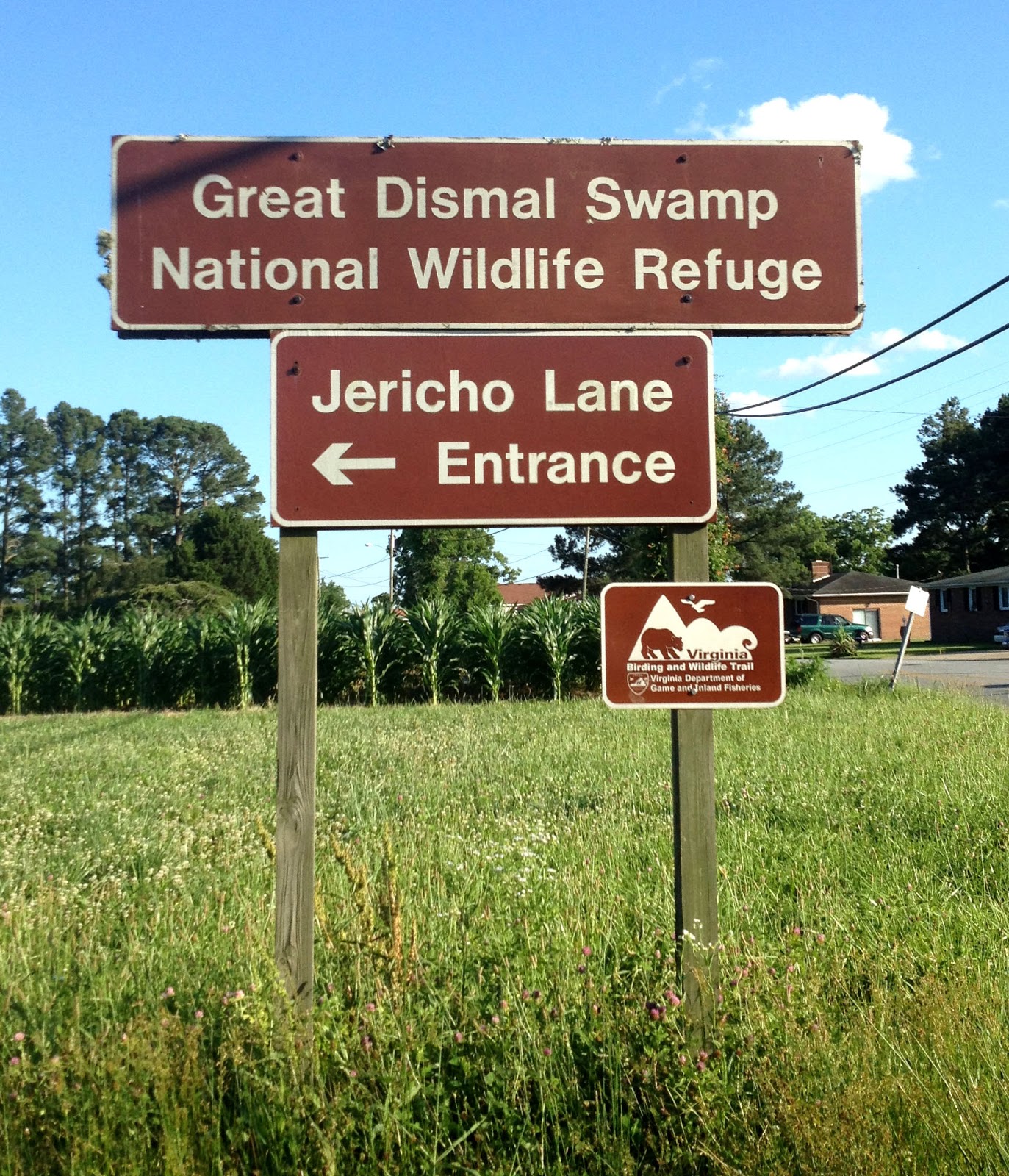 The swamp is around 50,000 acres with a large circular lake (Lake Drummond) at its center. It's one of the biggest and wildest areas of the Eastern US. And it used to be much bigger and much wilder (and probably to Byrd, much more dismal) - around 1 million acres - before intensive logging and drainage almost destroyed it. Signs posted around the swamp remind visitors of its checkered past. Many of the ditches - dry, logging roads that run through the swamp - were built with slave labor. Later, its seclusion attracted runaway slaves that lived here in maroon societies, achieving some kind of freedom.

I'm guessing that William Byrd wasn't a birder. Otherwise, he'd have swooned over the Swainson's Warbler - the largest concentration of which today is probably found in this very swamp. A highly secretive warbler that likes dense inaccessible swamps and thick ground cover - i.e. places that are hard to get to, and hard to see into! The birds are often to be found on the ground - wiggling their way through leaf litter looking for tasty morsels. This skulker is the last of the breeding warblers for my Big Year. Having missed it during migration, I found myself walking out into the Virginia swamp late on a summer afternoon - hoping to at least hear their distinctive song, and maybe, just maybe, to catch a glimpse.

The Great Dismal Swamp is a beautiful place… 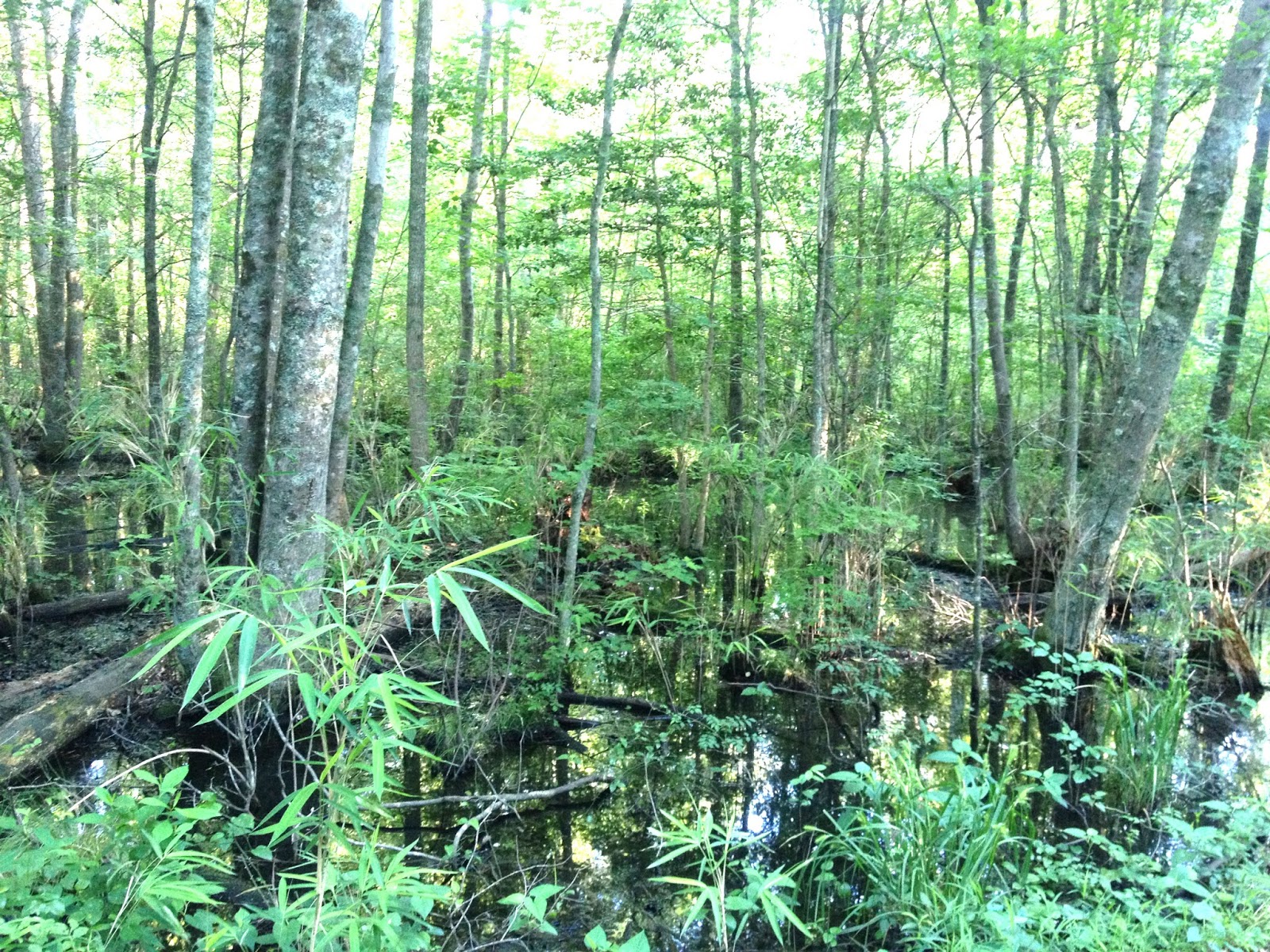 The only thing really dismal about the swamp these days is the 600 mile drive from Boston (yeah - it seemed like a good idea at the time!) Gerri was along for the ride ("the dismal swamp is a vacation destination?"). Soon after arriving we started hearing Prothonatory Warblers - and were dazzled by their brilliant yellow plumage and steel blue wings: 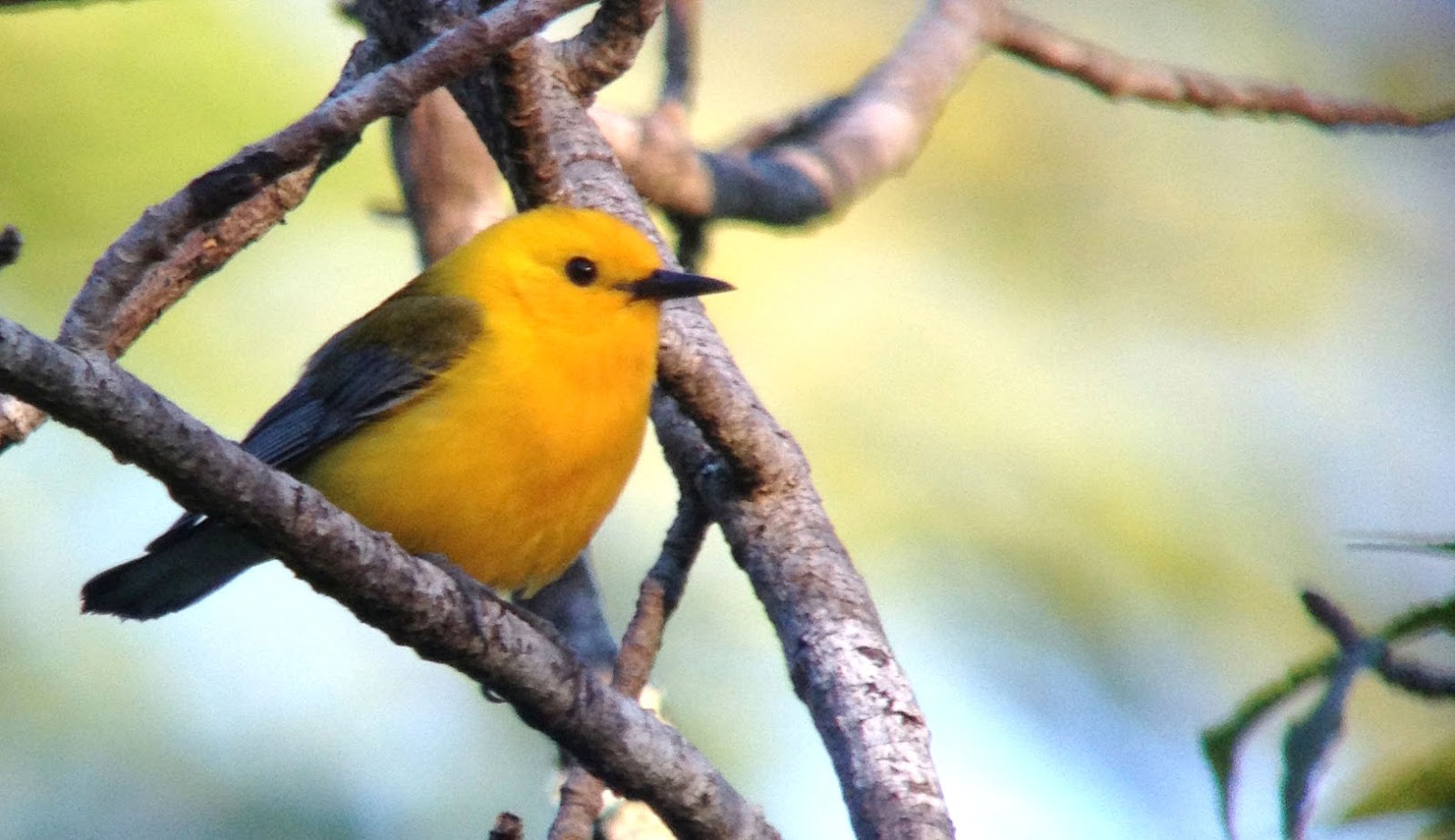 About half a mile down Jericho Ditch, we suddenly heard it. "ooh, ooh, I stepped in poo" - the easily memorable song of the Swainson's Warbler (alternatively, and more politely, transliterated as, "whee, whee whip-poor-will".) And then we heard a second bird! For the next hour, we peered into the dense swampy understory hoping to catch a glimpse. But no luck. It was tantalizing - they were so close, they were continually singing, but they were so well hidden.

As it was getting dark, a deer emerged from the swamp onto the ditch, probably wondering what the hell we were doing. Didn't we know that Virginia Beach was only an hour away?? 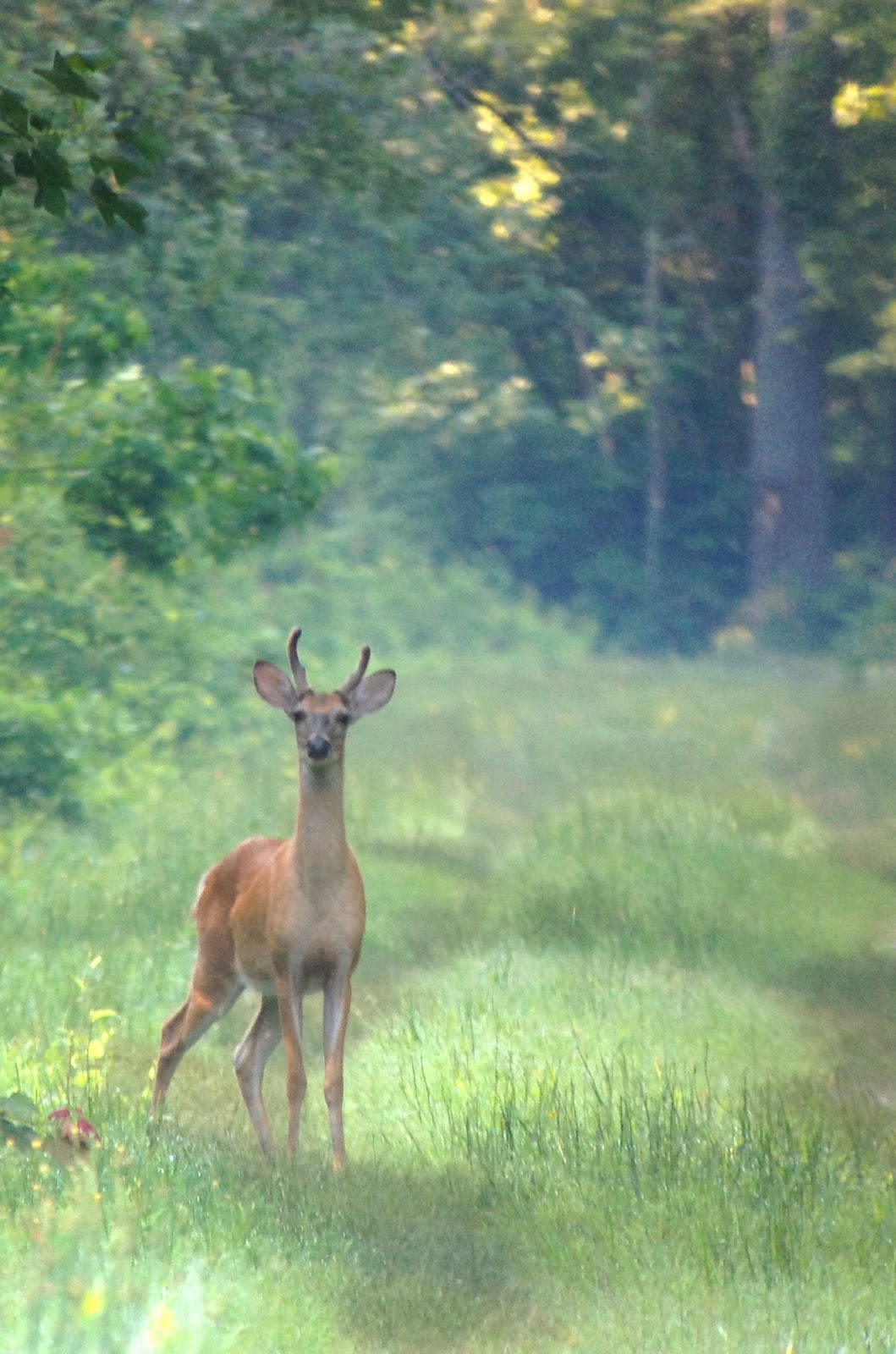 I was very happy to add Swainson's to my heard list, but really wanted to see one. We'd been so close! So we planned on a return visit the next morning. We stayed in nearby Suffolk, where I was happy to see that Virginians are still pondering important philosophical questions… 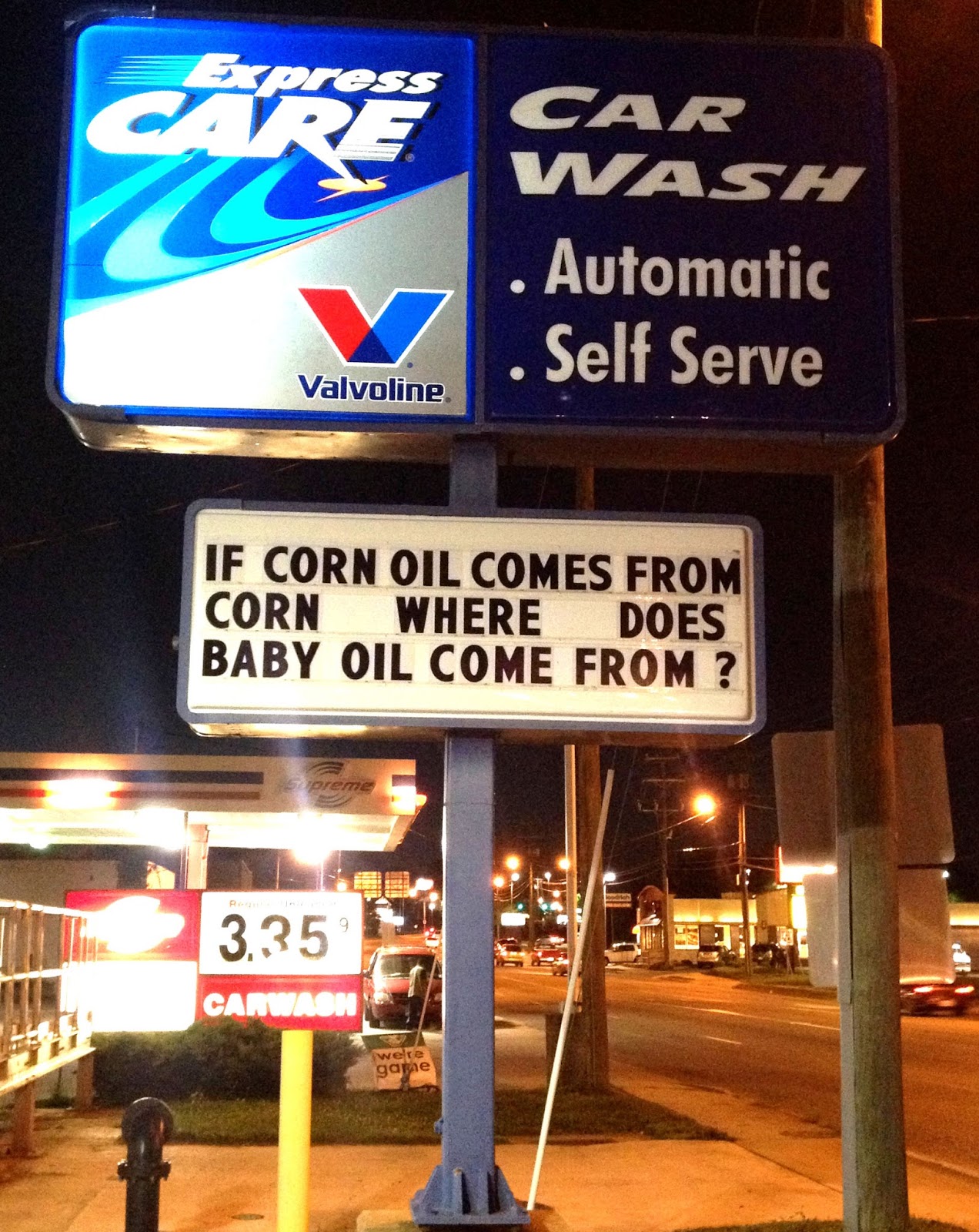 The next morning the swamp was alive with birdsong - Prairie Warbler, Northern Parula, Yellow-billed Cuckoo, Great Crested Flycatcher. And the two Swainson's Warblers. We waited patiently again, almost burning holes into the swampy undergrowth with our focussed attention. But no luck. They'd beaten us again! We gave up, and drove somewhat dejectedly out of the swamp along Jericho Lane.

I was pulling up the map for Chapel Hill, our destination for the night, when I heard out the window that someone had just stepped in poo. We slammed on the brakes, reversed back, and jumped out. "Ooh, ooh, I stepped in poo." Swainson's! - and the swamp on this lane was much more open. Interesting! We waited. And finally - we saw it. A Swainson's Warbler flew back and forth between eye-level branches, seemingly excited by its new visitors. It even hung around long enough for a quick digiscoped pic… 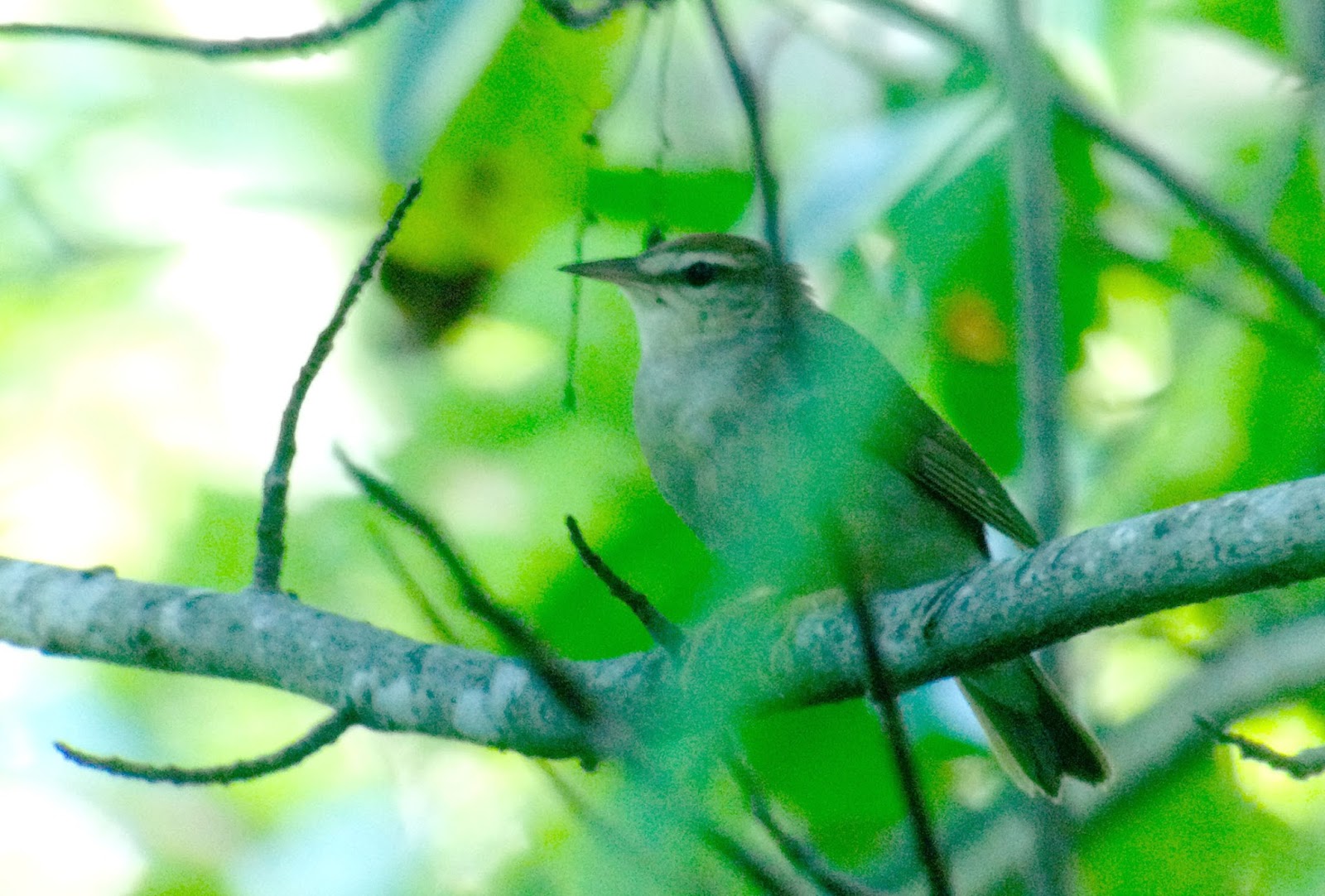 What a great bird! And such a strong personality. Despite the ostensibly nondescript coloring - brown upperparts, gray-white belly, rich brown cap - it's a stunning bird, all the more so after the long and frustrating chase. Nothing dismal about this bird! And never has stepping in poo sounded more fun…