This was absolutely the wrong day for rain. This was a big, multi-transportational chase - my biggest this year - and it was raining. I was not feeling at all confident while eating my (surprisingly delicious!) Huevos Rancheros in Rockland. (Check out Home Kitchen Cafe!) Gerri and I had driven 4 hours from Cambridge to be here in time for the ferry. The ferry would take us to Vinalhaven, an island off the coast of Maine. From there, we'd be taking another, smaller boat a further hour or so to our final destination: Seal Island. And there, finally, we hoped to see the rare Red-billed Tropicbird.

The weather wasn't on our side. But we did have one lucky charm up our sleeves - John Drury - the "Tropicbird Man." He'd been taking people out to Seal Island for the past 7 years - ever since this tropical bird - nick-named Tropi - had taken up annual summer residence here - thousands of miles north of where it should have been. The man had an almost tangible bond with the bird and we were hoping that John could work his magic today.

The ferry ride was smooth with lots of Black Guillemots in breeding plumage to keep us busy with our binoculars. An hour and a half later the ferry disgorged us into the tiny fishing town of Vinalhaven. Brightly-colored skiffs bobbed in the harbor, lobster pots crowded the quiet streets, and we felt the cool summer breeze on our sweating brows. The rain had stopped. 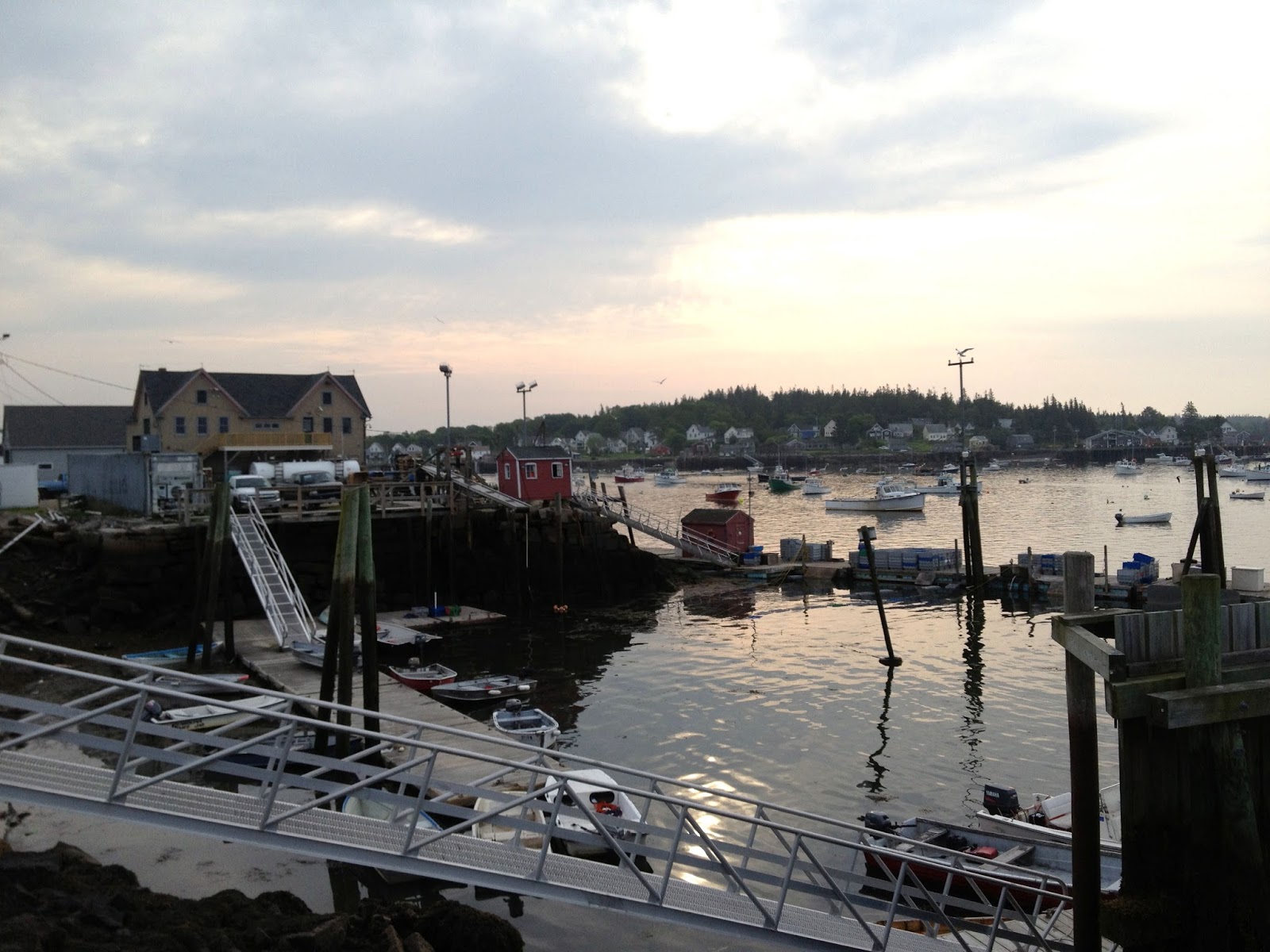 Amid the clapboard New England Cape houses, there's a refreshing French influence to the architecture - including where we were staying - the Payne Homestead. 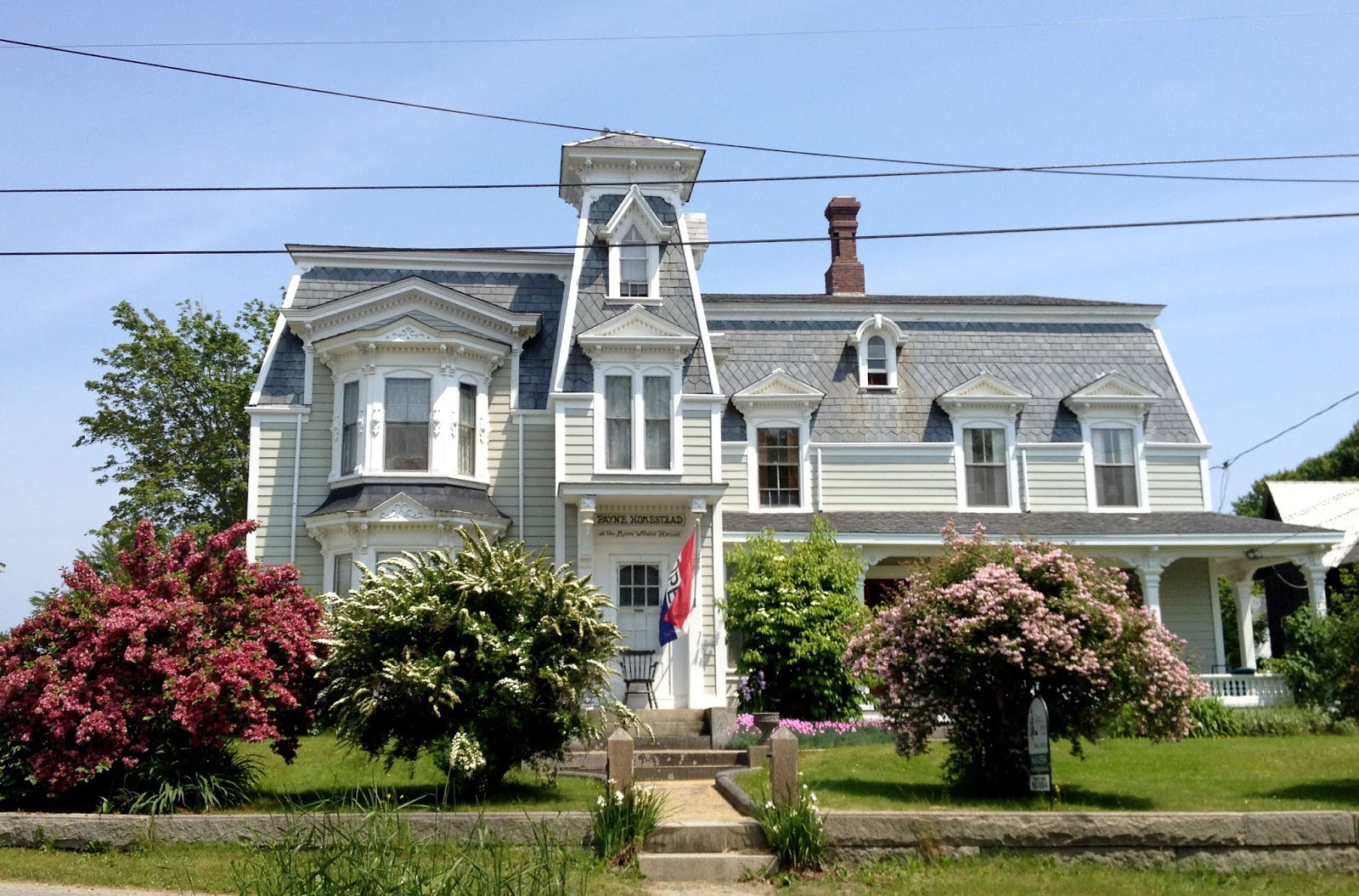 If this was Nantucket at this time of year, it would be crowded and obnoxious. But this is rural Maine at its best. No TV in the hotel (except the "TV room" which has no cable, but a VCR machine (!) with a bookcase of video *cassettes*) or internet. But plenty of friendly hospitality.

John Drury was waiting for us in his new boat, Skua. He's a tall, quiet man, who espouses shoes, small talk and knows these islands like the back of his hands. Stepping aboard, John coaxed the boat gently out of the harbor… 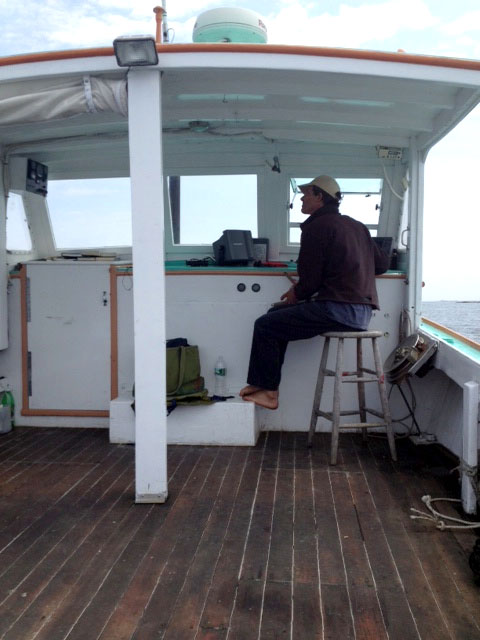 John Drury at the helm of Skua.

It felt almost appropriate that we were flying the Welsh flag - only one country away from my birthplace, and home to my best friend back home, Jon. 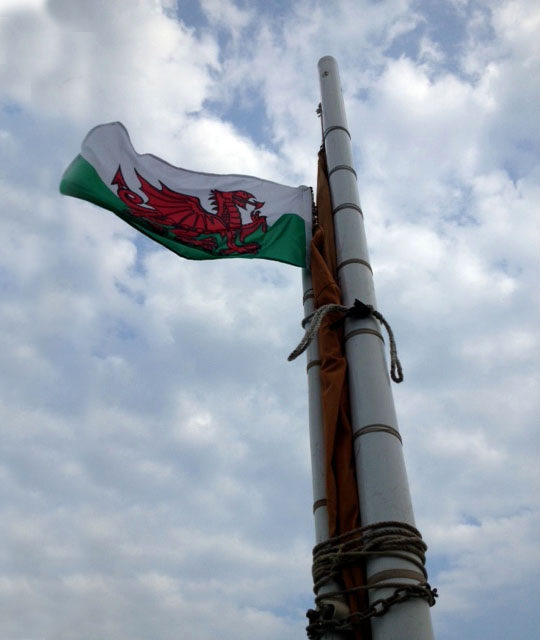 It's about an hour out to Seal Island. On our way we saw Common Eider mothers forming communal rafts, shielding the chicks hidden in the center. A new urgency to this protection has been the recent and dramatic increase in summering Bald Eagles. We saw up to 12 birds. Eider and Cormorant (including several pairs of breeding Great Cormorant) chicks provide regular and bite-size snacks for the Eagles. 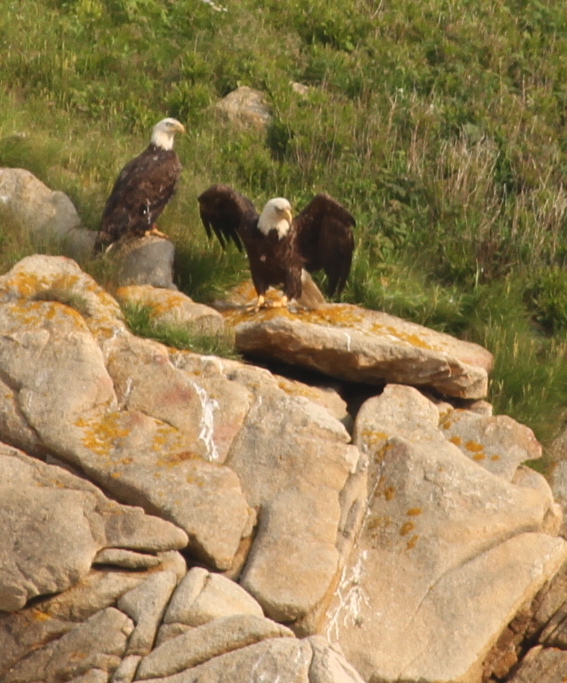 Can you see the famous film director?
Appropriately, he's among the birds (the one bird here is a Bald Eagle.)

As we reached Seal Island, we were greeted by the irresistibly-cute Atlantic Puffin. 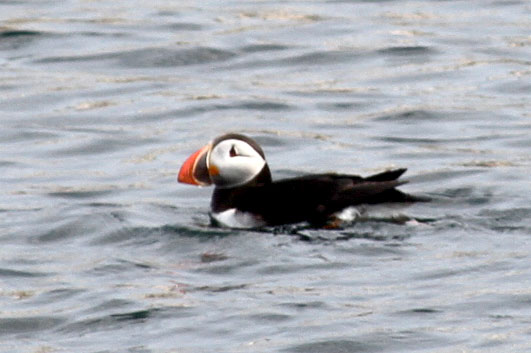 Atlantic Puffin.
During spring, the bill increases in size and color which may play a part in mate selection.

As well as a pair of Long-tailed Duck in rare breeding plumage, and Common Loon… 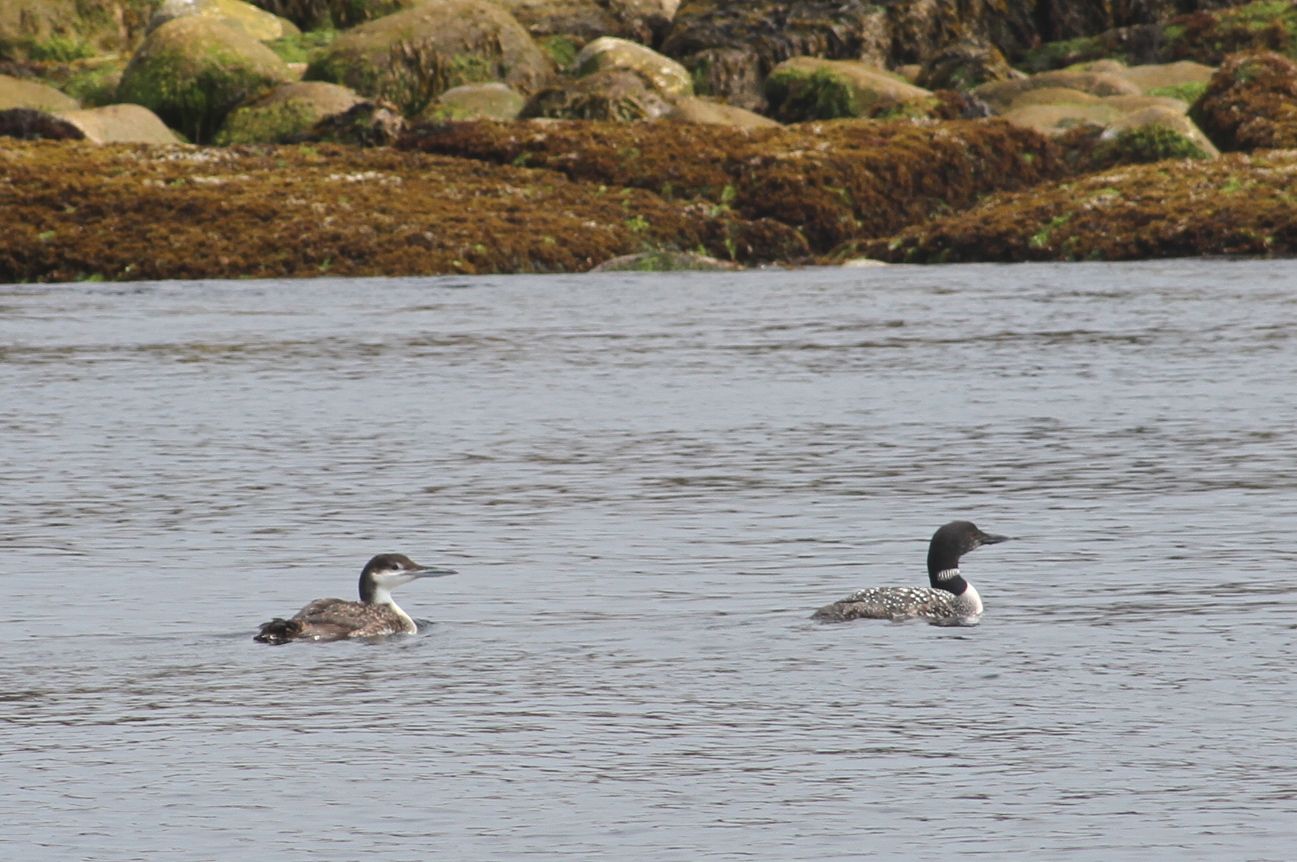 and the breeding colony of Arctic Terns: 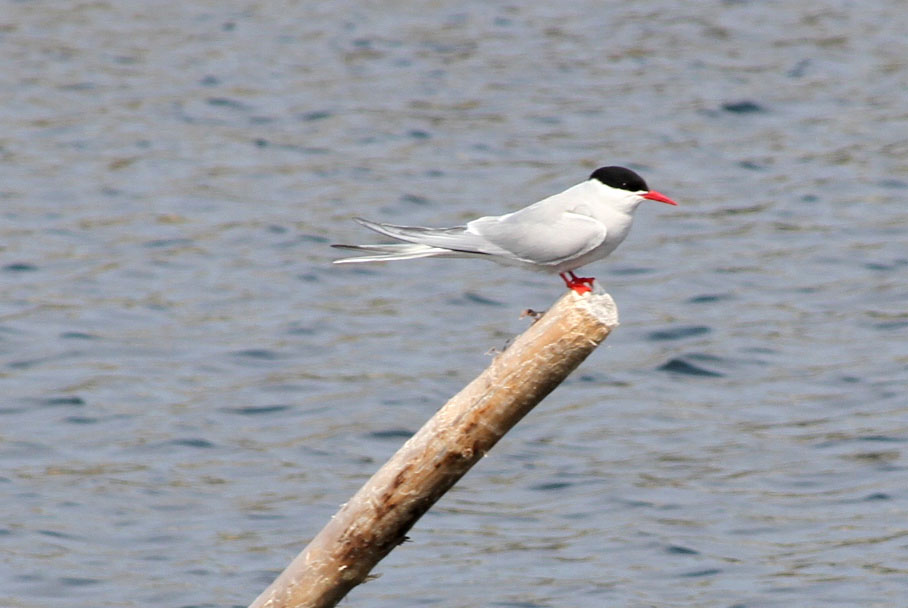 i.e. - everything but the Tropicbird! The delightful Puffins had quelled my nerves for a while, but now they were back. Where was Tropi? There had been one sighting this year back in May. Could this be the final year of the Tropicbird? John circled the island hoping a different view would help. While we were searching we had a pair of breeding-plumaged Common Murres: 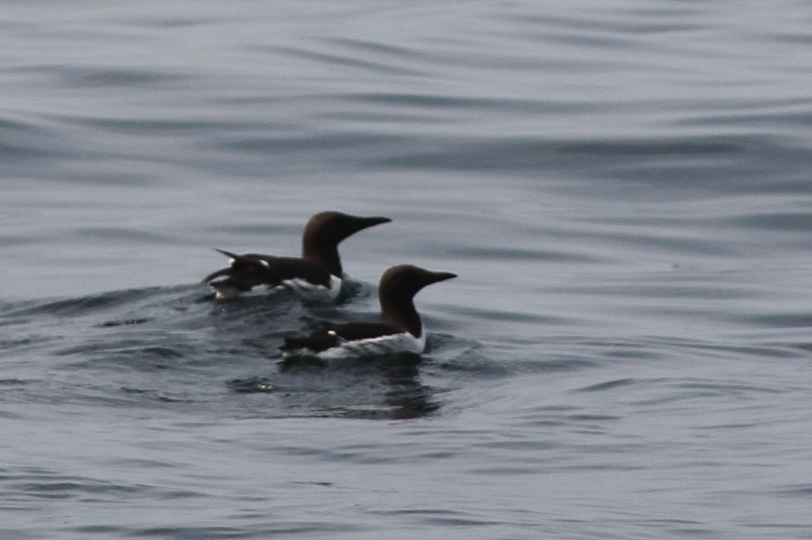 A pair of Common Murres.

Unusual this far south at this time of…."Tropicbird!" The scream comes from behind. Gerri's shouting and I almost fall out the boat in surprise! As I wheel around to see why the hell she's shouting a huge bright white bird with an impossibly long tail and blood red bill glides silently past… 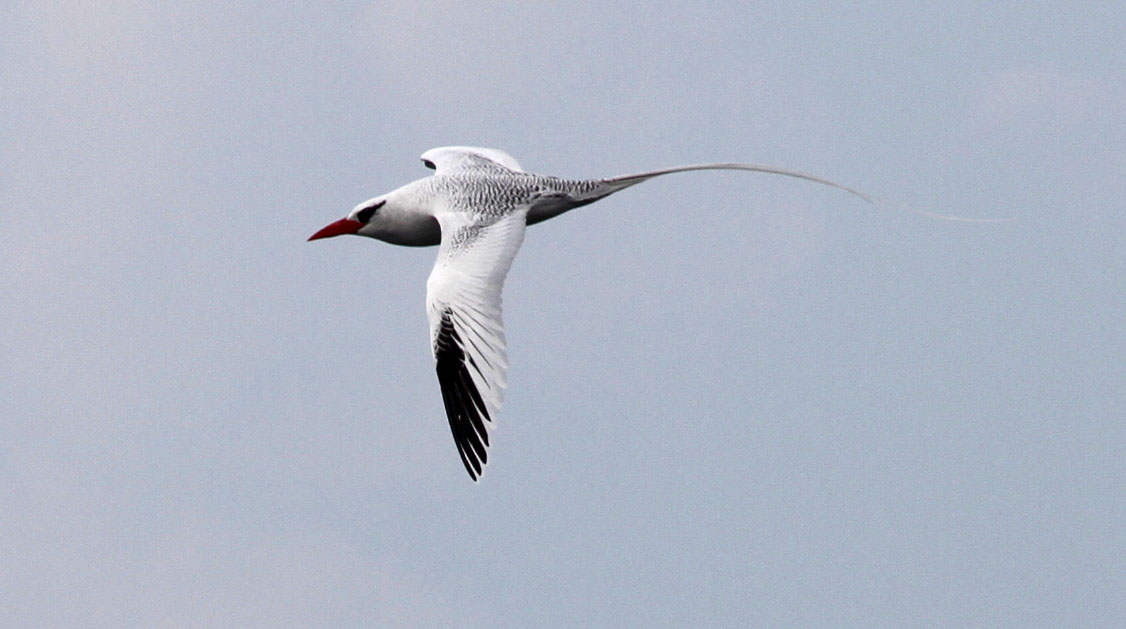 I shout out too, and soon we're all shouting "Tropicbird!" Well, everyone except for the yogically calm John, who's nodding, and ready at the helm to follow the bird. After strafing a few terns the bird lands amid a group of Common Loons. We approach close enough to admire the bird: 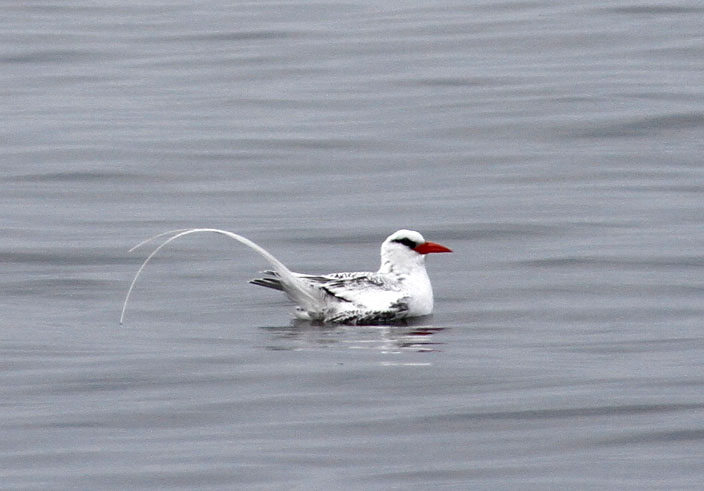 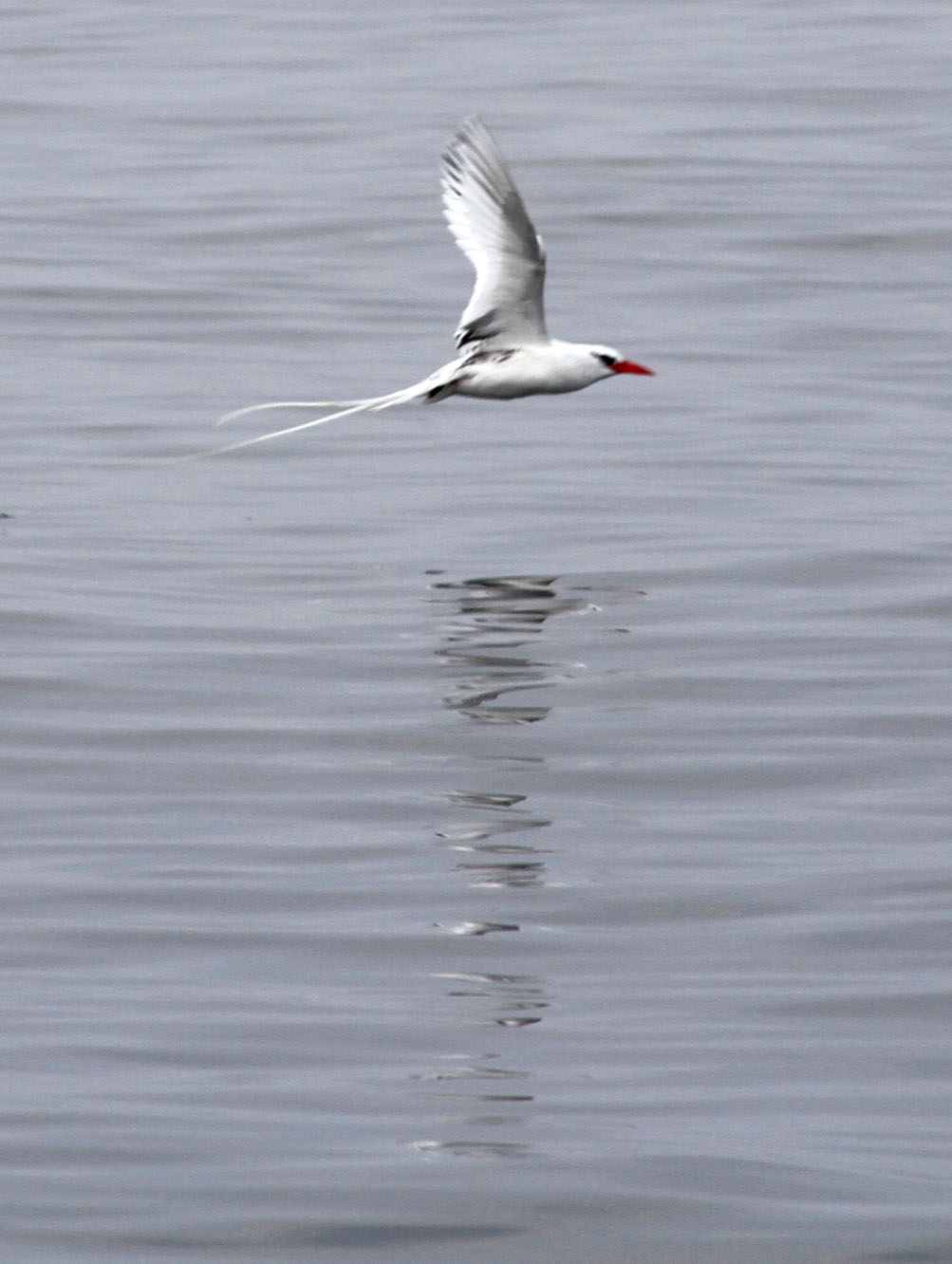 For the next 15 mins we watch as Tropi takes off and flies among the terns. Despite its huge size, it's a surprisingly graceful flier. John explains that when the bird first arrived it wanted to roost among the terns. Must be pretty lonely being the only Tropicbird in town But the terns were having none of it, and kept chasing it away. In return, Tropi started strafing the terns and generally annoying the hell out of them. This game has gone on for 7 years, and we witnessed some of these playful interactions: 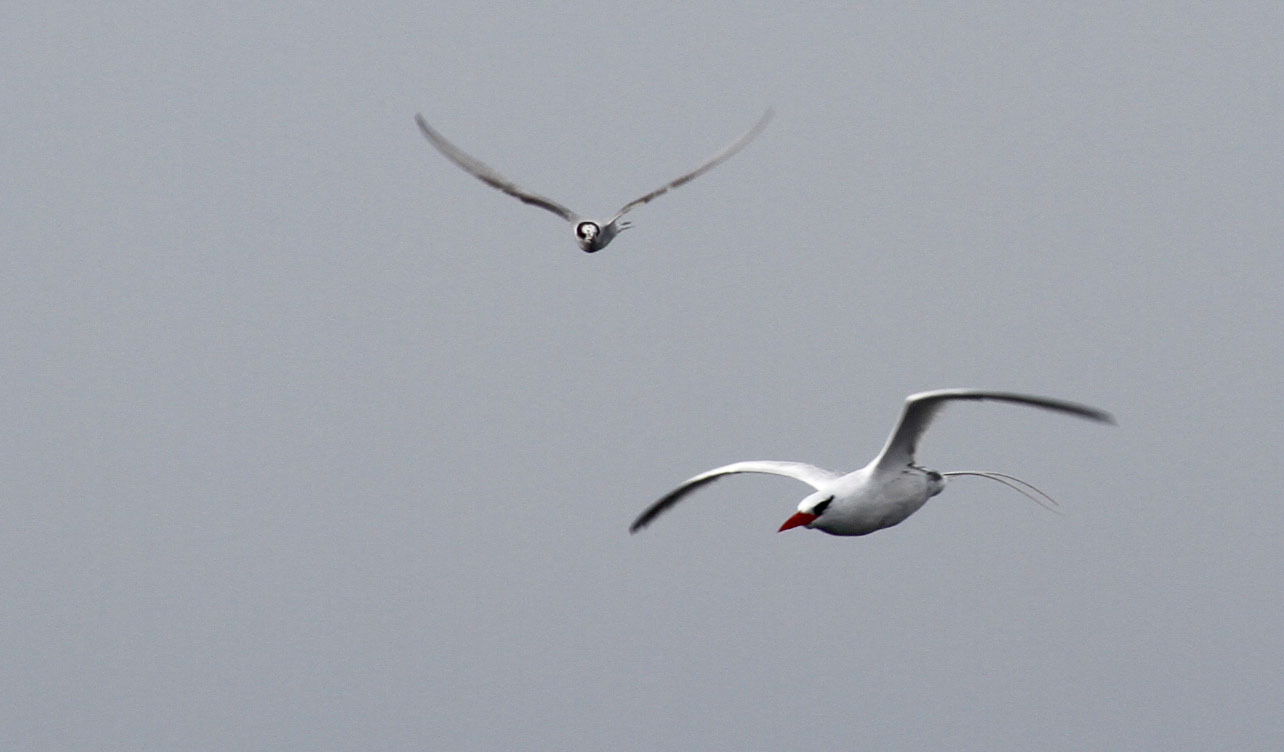 This has been one of the my most amazing birding experiences - such an enigmatic bird, and a really fun trip out to see it. I was happy to share it with Gerri - who's celebrating her birthday this week (Monday.) 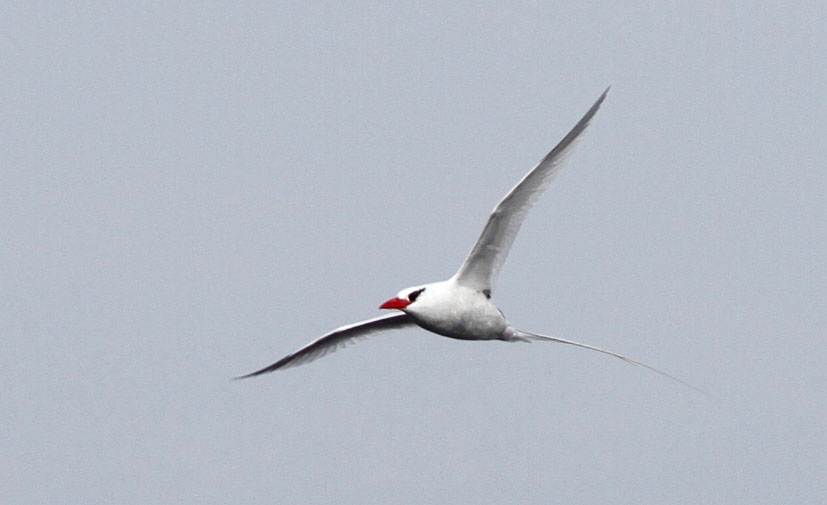 Thank you Mr Tropicbird Man! Contact details for John Drury if you're interested in an awesome afternoon out in coastal Maine: 207-596-1841.

So - it's June 23rd and I've seen an amazing 650 birds! I started this year having no idea I'd be doing this. A January trip to Arizona was just a winter break from the (relatively) birdless Massachusetts. It wasn't really until March / April that the audacious thought first entered my mind: this is pretty good start - maybe I could do a Big Year? Back then, a Big Year would have been 550. As the months and birds have rolled by, I've been upping my targets - 600, 625, 650. And now I have a good chance to get into the 700s. John Vanderpoel, who saw an incredible 745 birds during his 2011 big year was at 654 by the end of June (his 650th bird - coming on June 26th.)

Anyway, back to reality. A good night's sleep on Vinalhaven (there's no return ferry after 4:30 so we're stuck on the island) and then back to Boston.

Happy Birthday Gerri! Hope you enjoyed the Tropicbird and Puffins!