This has been such an incredible birding week - highlighted by some rare, and very colorfully-named birds: Red-billed Tropicbird in Maine, Yellow-green Vireo in the Rio Grande Valley, and Flame-colored Tanager in Big Bend. June had been good to me - I was sad the month was fast coming to an end.

As I'm discovering, the second half of a Big Year is going to be very different from the first half - as noted by Chris Hitt in slowbirding. I've seen 652 birds in the first half, and I'll be lucky to get more than 50 in the second half. The rarities have slowed down, and apart from a couple of owls (Barn and Northern Saw-whet) there wasn't anything anywhere near the East Coast for my Big Year upon my return to Boston.

These were the thoughts of a very sleepy birder flying back from Texas on Thursday. As I touched down at Logan I was greeted by the familiar skyline of Boston... 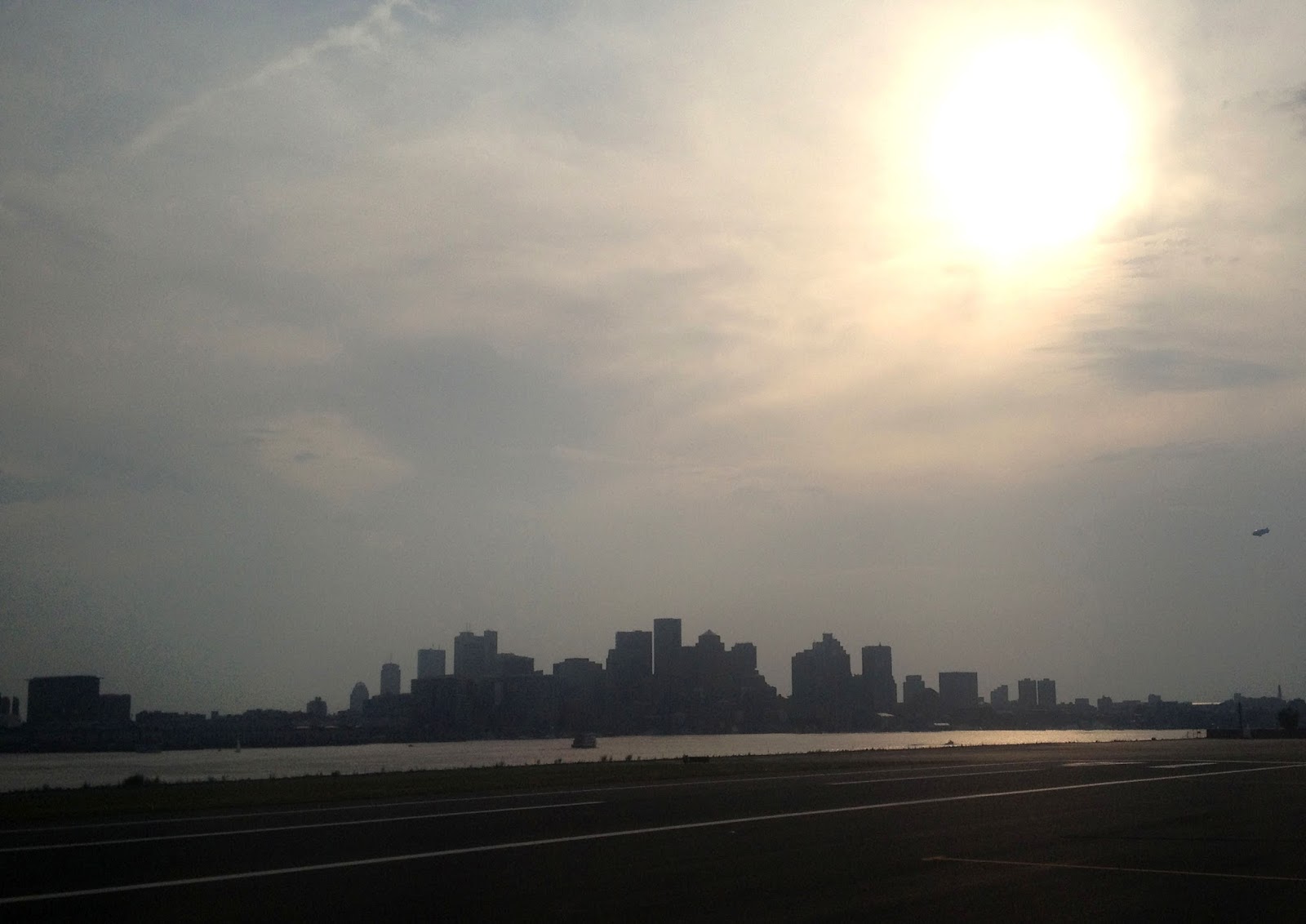 Turning on my cell phone as we land, I almost jump out of my seat (which I think is some kind of capital offense now) and race toward the door (which I'm sure is probably even worse.) The reason for my near arrest and imprisonment are the words: "Red-necked Stint" - a tiny, brightly-colored shorebird from Asia, paired with the words "Plum Island" - about an hour north of where we're currently taxiing.

Red-necked Stint holds an prominent position on my list of nemesis birds - birds that I've chased and missed (often painfully.) And this one's an international nemesis! As a kid growing up in the UK, I remember chasing this bird with my birding friends Jon and Robert. We drove 4 hours (a distance that's considered almost inconceivable in the UK - undoubtably flasks of tea were brought along with a stash of Cornish pasties) to north Norfolk on the east coast. The bird was only the second record for Britain, and had been present for several days. On the way up we called "Birdline" (yeah - no listservs in 1992, we had to call a phone number to listen to a recorded message of rarities) to check that bird was still there (it was.) We arrived, having already mentally ticked this bird, enjoying adding a super-rarity to our British lists. As we walked towards the blind in front of which the bird was feeding, we met a birder coming in the opposite direction, "Sorry mate, it just flew off, high towards the east." We spent the rest of the afternoon there, looking for it, but knowing that it wasn't coming back. And it never did. We missed the bird by about 15 minutes. No amount of tea and pasties was going to make up for this loss.

Amazingly, a Red-necked Stint turned up in MA in 2010. Now was my opportunity for revenge! The bird was on south beach, Chatham, Cape Cod. It requires a boat to get out there, and then several miles of wandering the beach in very hot and very buggy conditions. A whole day there produced exactly zero Red-necked Stints. This was a game I wasn't winning:

Gerri picked me up from the airport, and amazingly we made it up to Plum Island (a) an hour before sunset and (b) without a speeding ticket. There were birders there - which was good. But they weren't looking at anything - bad. We met my friend Jim McCoy walking back, who hadn't seen the bird. Shit.

Maybe it was too much to expect after such a record week. But the bird had been moving around a lot based on the tide. I felt hopeful the next day the bird would be relocated.

Friday morning the magic words appeared in the subject line on the Massbird listserv, "Red-necked Stint - YES" We raced to Plum Island, ran to the beach, and were met with a crowd of smiling birders - "It's in the scope now if you want to look." Really? I'd finally get to see this tiny beauty / bastard? Yes - I would. And I did. 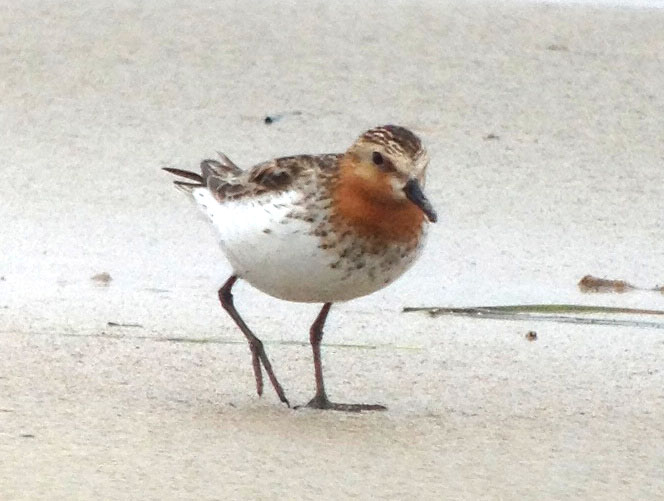 Red-necked Stint. Notice the reddish neck and stippled necklace.
This is a small shorebird with a short, stubby bill, which it uses to feed in the tidal mudflats. 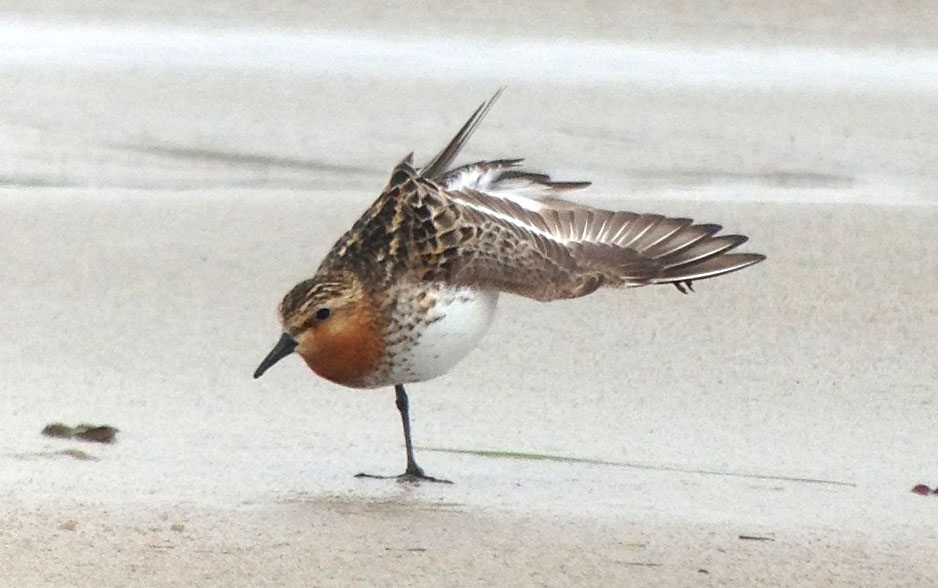 Holding the half moon yoga pose. 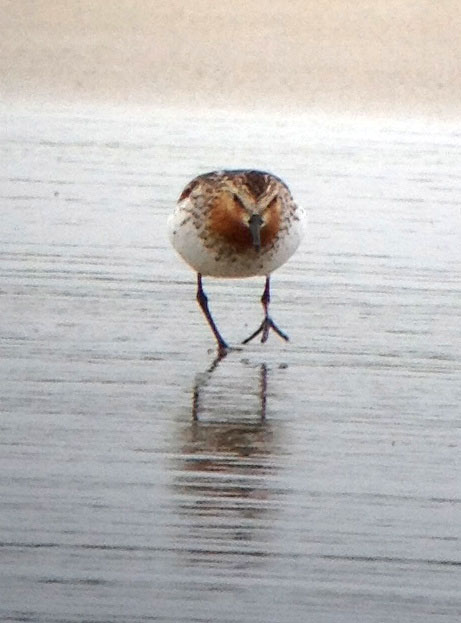 I was finally on the Stint scoreboard: