I'm sitting in a rental car, it's 1am, and I've just driven 1,040 miles in one day. I'm about to recline my seat and convert my vehicle into my hotel. This is the level of insanity / stupidity to which this Big Year has devolved. Oh, and did I mention that my car is parked at a trailhead at Big Bend, TX? A place to which I'd sworn recently never to return. And I've just seen a Black Bear outside… 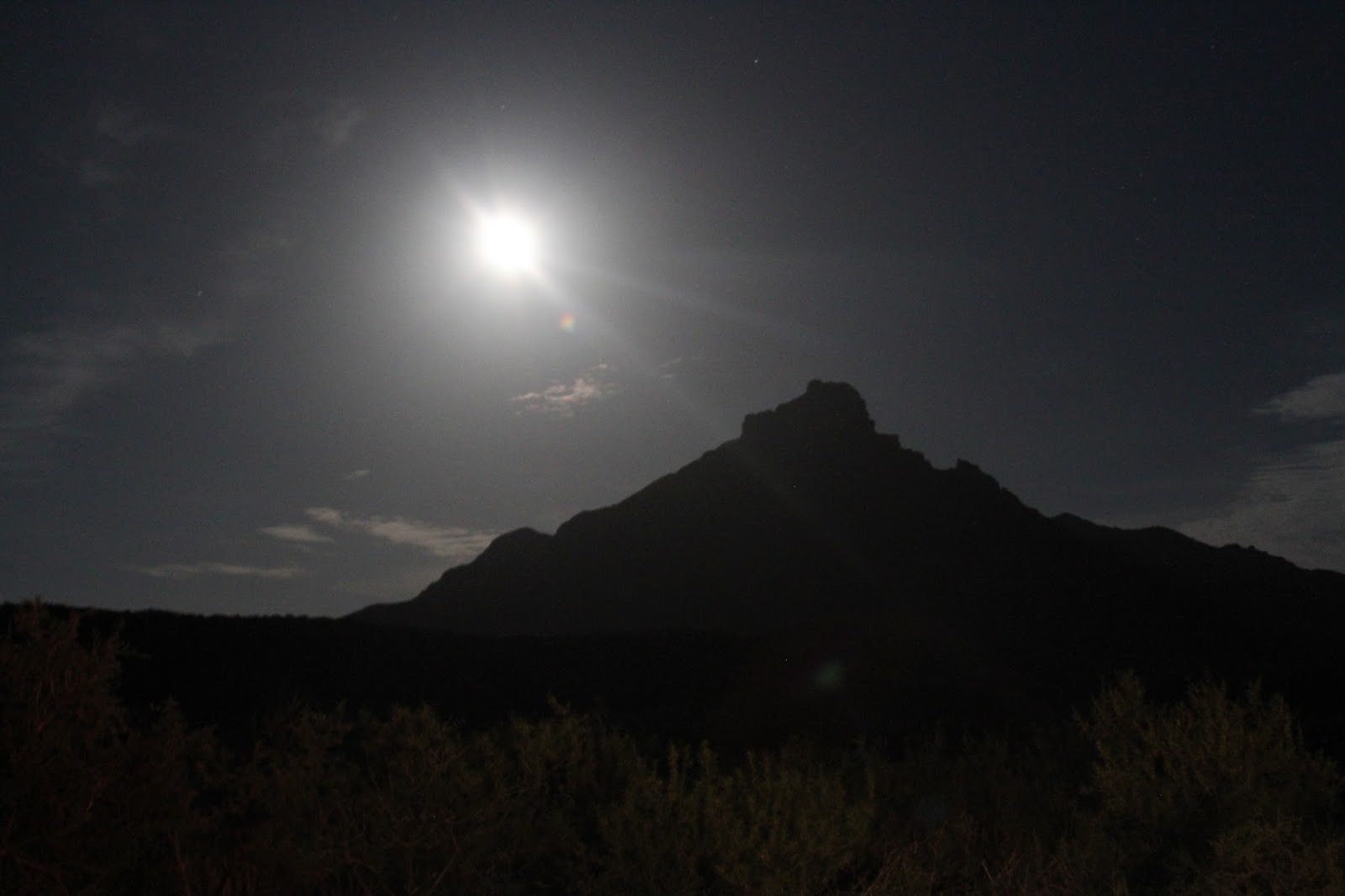 I'm half-way through what is (hopefully) the most physically demanding trip of the year. Here's the itinerary:

MON: Wake up at Vinalhaven, ME. Ferry to Rockland, ME. Drive 4 hours home to Cambridge, MA. Shower, feed / say hi to cats, pack, head to airport. Fly to Austin TX via Charlotte.

WED: Hike 11 miles up and down the Pinnacles ("death march") Trail to Boot Canyon for Flame-colored Tanager (for the second time this year.) Drive 7 hours to Austin. *Sleep*.

THU: Fly home, shaking from all the buckets of (probably very bad) coffee I'll have drunk. But hopefully with 2 new birds.

The Flame-colored Tanager has been haunting me ever since I hiked up Big Bend in mid-May and missed it. It's been seen more regularly since, and appears to be breeding with a female Western Tanager. The Yellow-green Vireo has been around for almost 2 weeks. Both birds are pretty rare (code 3), and I've been reading the reports with a  growing sense of unease, knowing that I should probably go. So, here I am, on a 1,500 mile, 2 day, double-rarity chase in Texas. In the summer. I already know exactly how I'll feel if I miss them.

With a couple of (stationary) naps on the drive, I made it to Brownsville in one (heavily caffeinated) piece this morning. As I arrive at Resaca de la Palma I meet one of the park rangers, Jade, who shows me on a map where the bird was last heard. It's a mile away on the tram route… which, of course, isn't running today. I team up with 2 other birders who've just arrived, and we walk out to the location. It's a hot and sticky 100F. 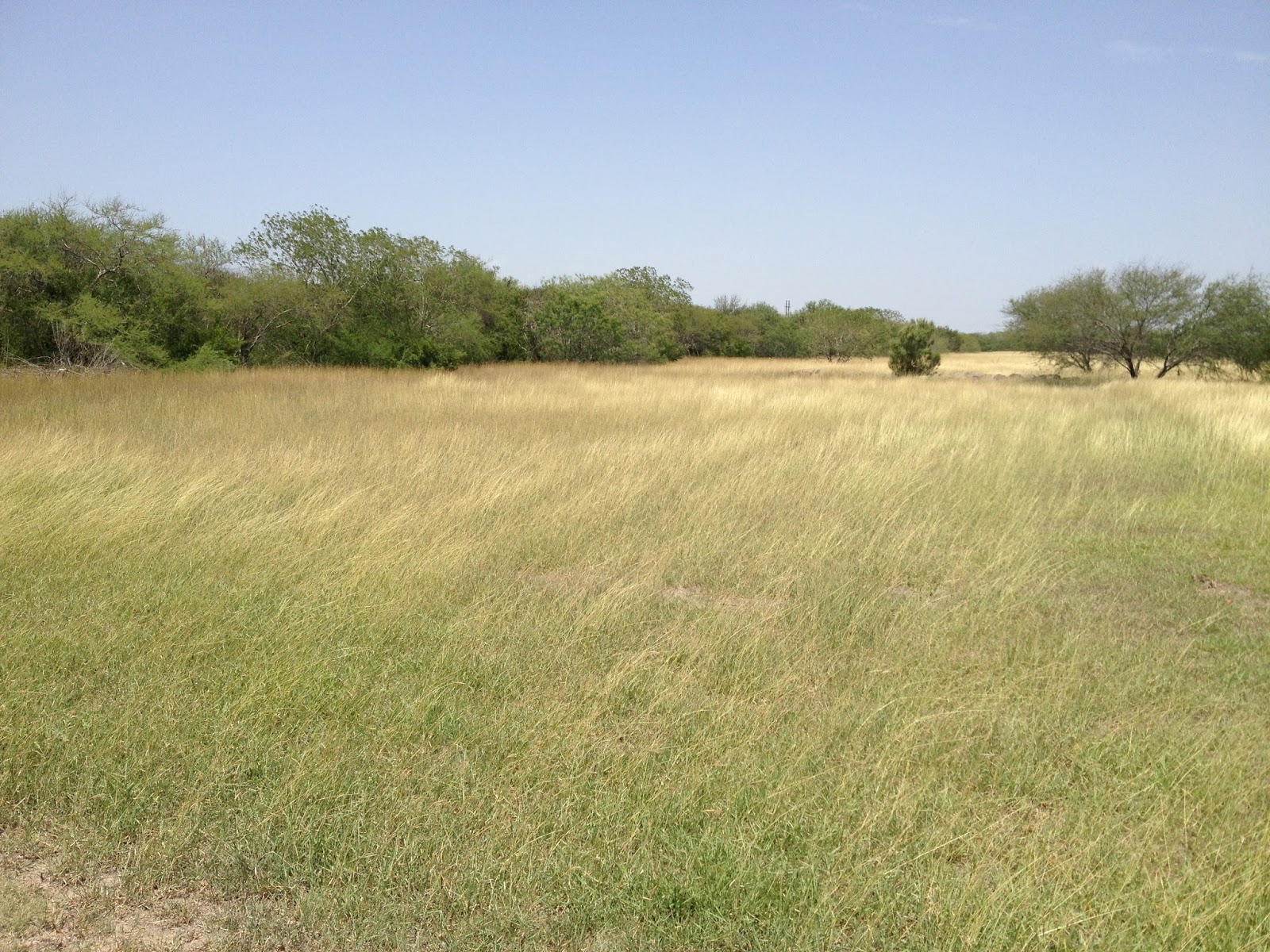 Two hours later and we're all very hot, tired, and have a collective list of exactly zero Yellow-green Vireos. To add to the frustration, the local Mockingbirds are confusing us by singing parts of the vireo song - they clearly were exposed to this visitor and incorporated aspects into their own song. Mockingbirds are mimics, the ultimate cover artists among birds - their repertoires are based on other songs they've heard, and presumably thought - "Hey, that's a cool song, I'll add that to mine."

As the two other birders decide that this is no longer fun (technically, this point was reached after only 20 minutes) and leave, I stick around reviewing my options. The longer I stay here, the later I'll arrive at Big Bend. I absolutely need to sleep - I'm exhausted already, and the hike tomorrow will be hell. The bird clearly isn't here - Yellow-green Vireos love to sing, and will often sing all day, so we should have heard it already. I then remember there was a recent report at a different location in the park. It's another mile further into the park, and it's getting hotter. But I know I can't face the long drive if I haven't tried everything with this bird. So - I head off to the Yellowthroat Trail, wishing I'd brought water (yeah, right - I thought this would be a quick 30 min bird!), and trying to avoid the snakes… 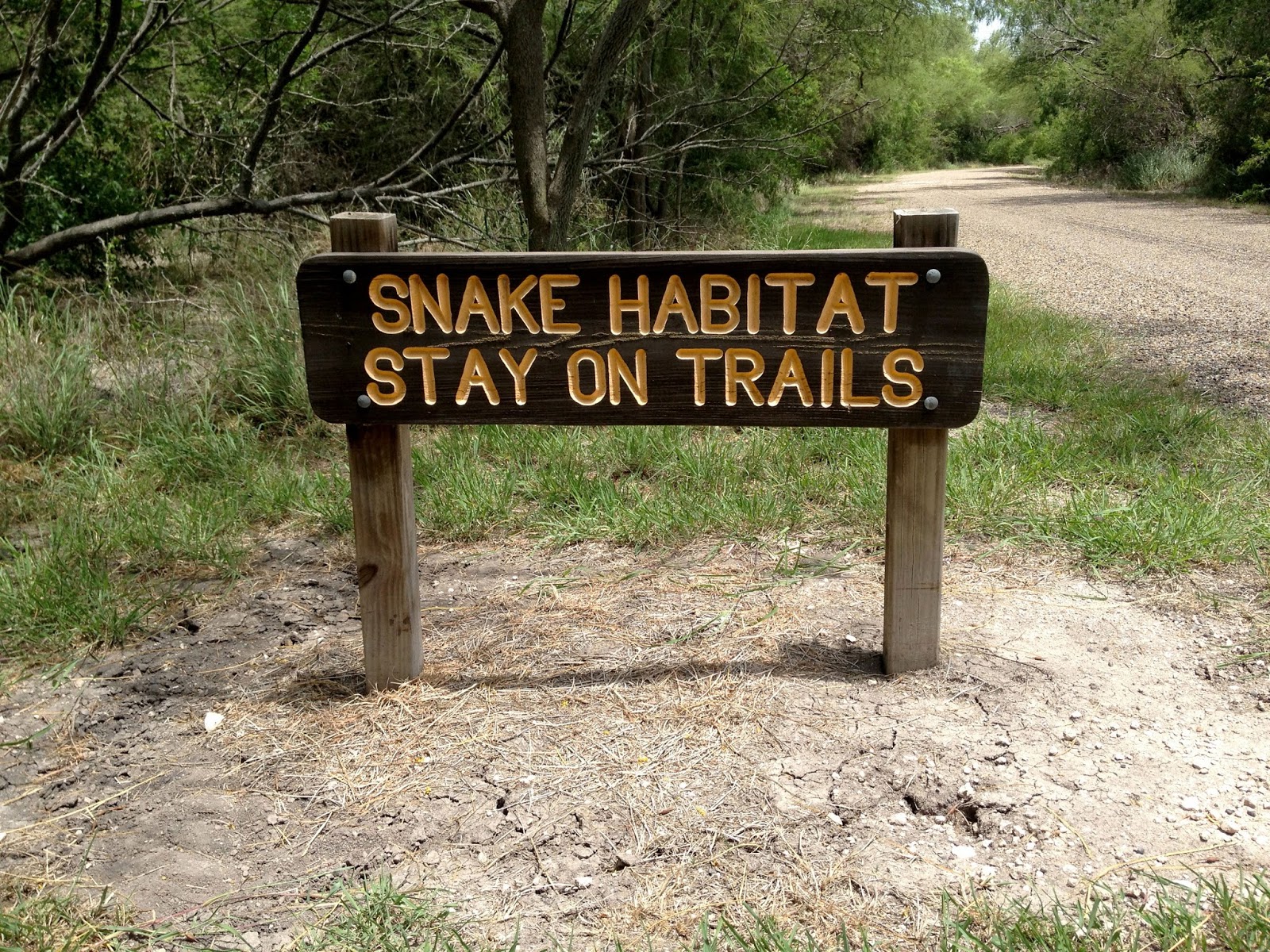 I hear it immediately as I reach the trail. A cross between a House Sparrow and a Red-eyed Vireo. It's noon, and the bird is singing persistently. Yellow-green Vireo! The relief is palpable. Some part of this whole boondoggle now seems worth it! Here's the song:

Song: Yellow-green Vireo with images of my feet!

These birds are real skulkers, and tough to spot. They'll sing from deep within a tree or bush, have a ventriloquial sound, making them hard to locate. And they tend not to move, so looking for movement isn't helpful either. Eventually, after staring at a tree for 10 minutes, I spot the bird. It's big, and is indeed yellow and green, as advertised: 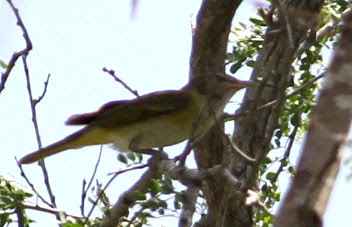 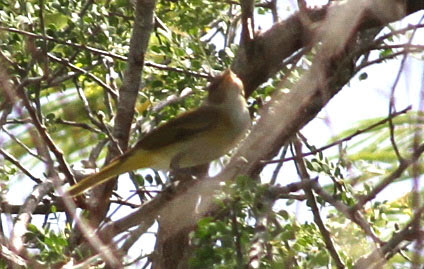 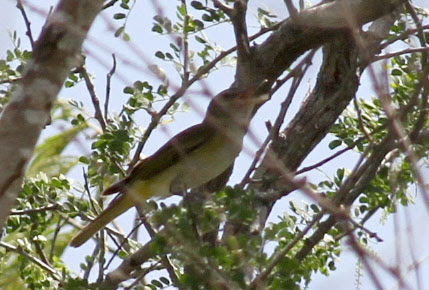 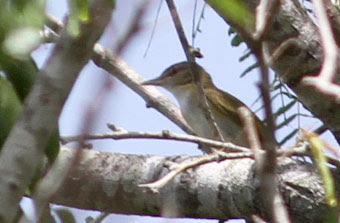 As I walk back to the car (where my supply of water is very inconveniently located) I'm reminded that I was on this very trail back in May, during migration. The place was hopping with migrants back then - including my only Philadelphia Vireo of the year. But thinking of this Vireo double-whammy is about all my brain can process - my head is close to the point of sublimating, or at least melting…

I'm not looking forward to the grueling hike tomorrow (note to self: remove water from car and put in bag), but I'm very happy that I have at least one of my target birds.

I'm turning the light out now and hoping this crappy Nissan rental car is bear-proof...