BICKNELL'S AND NELSON'S WITH KETCHUP AND MUSTARD

I'm back home now, and realizing that home is a pretty good place for a Big Year base. There always seem to be good birds to go for within a reasonable drive from Boston (note: my interpretation of "reasonable" has become rather *un*reasonable as of late.) And now is no exception. Gerri and I headed up north today on a search for Bicknell's Thrush and Nelson's Sparrow.

There are essentially two great spots for Bicknell's Thrush. One of them is called the Cap's Ridge Trail which has the highest trail head in the New Hampshire White Mountains. It's a steep 2.5 mile walk up Mount Jefferson, threading its way across stunning ridges and spectacular scenery. It's one of the most amazing hikes in New England. The other is a $15, 7 minute cable car ride up Mount Cannon, also in New Hampshire, popular with muggles, and noisy school kids. The Mount Cannon option is essentially for the pathetic, loser, lazy-ass birder.

We arrived at Mount Cannon in time for the first cable car. There are two - one at each end. They're yellow and red, and the tour giudes (yes, there's a guide in the cable car to help "explain" the mountain you're going up) call them Mustard and Ketchup... 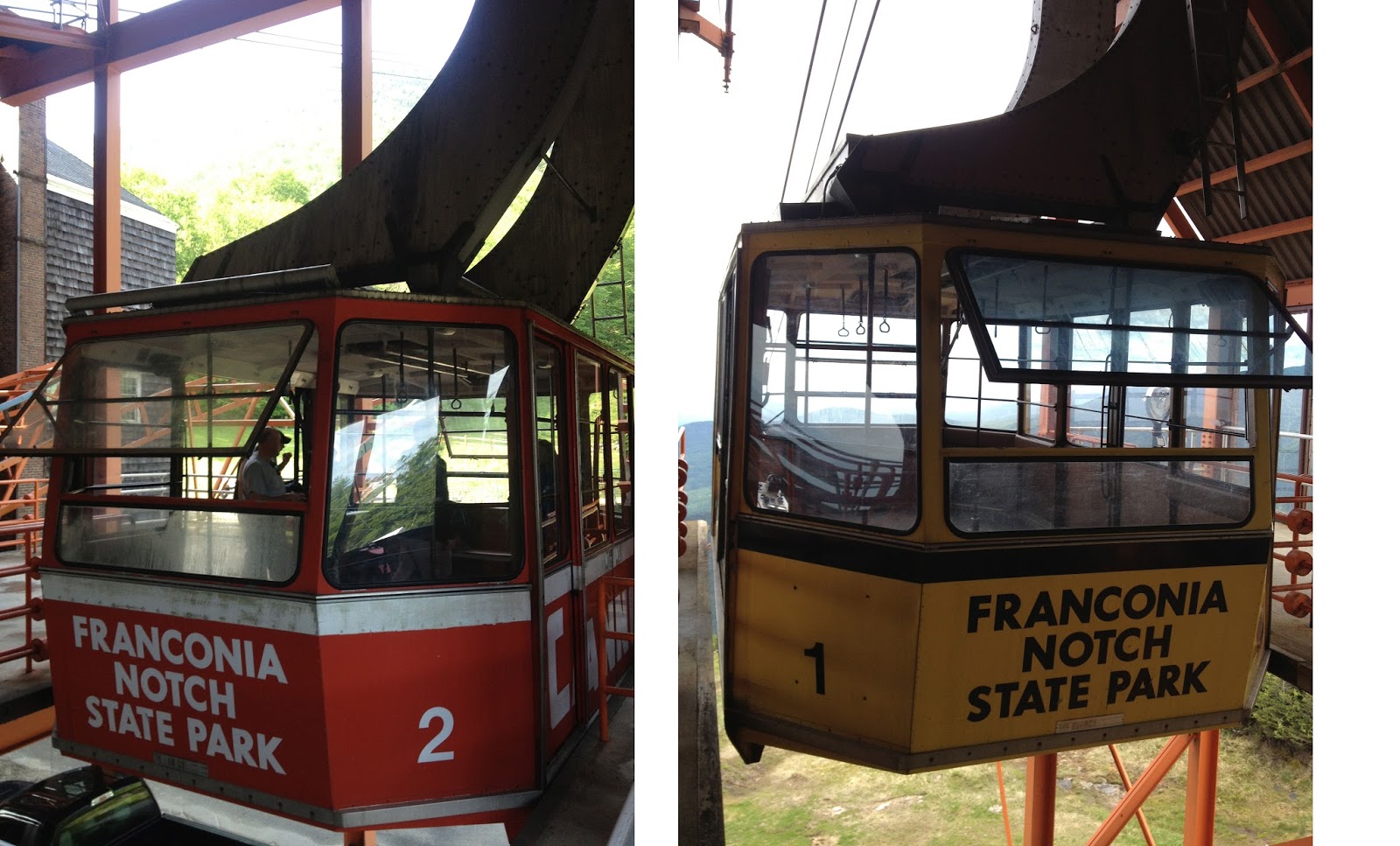 Bicknell's Thrush is found in stunted (Krummholz) conifer forests above 3,000 feet. Which looks like this: 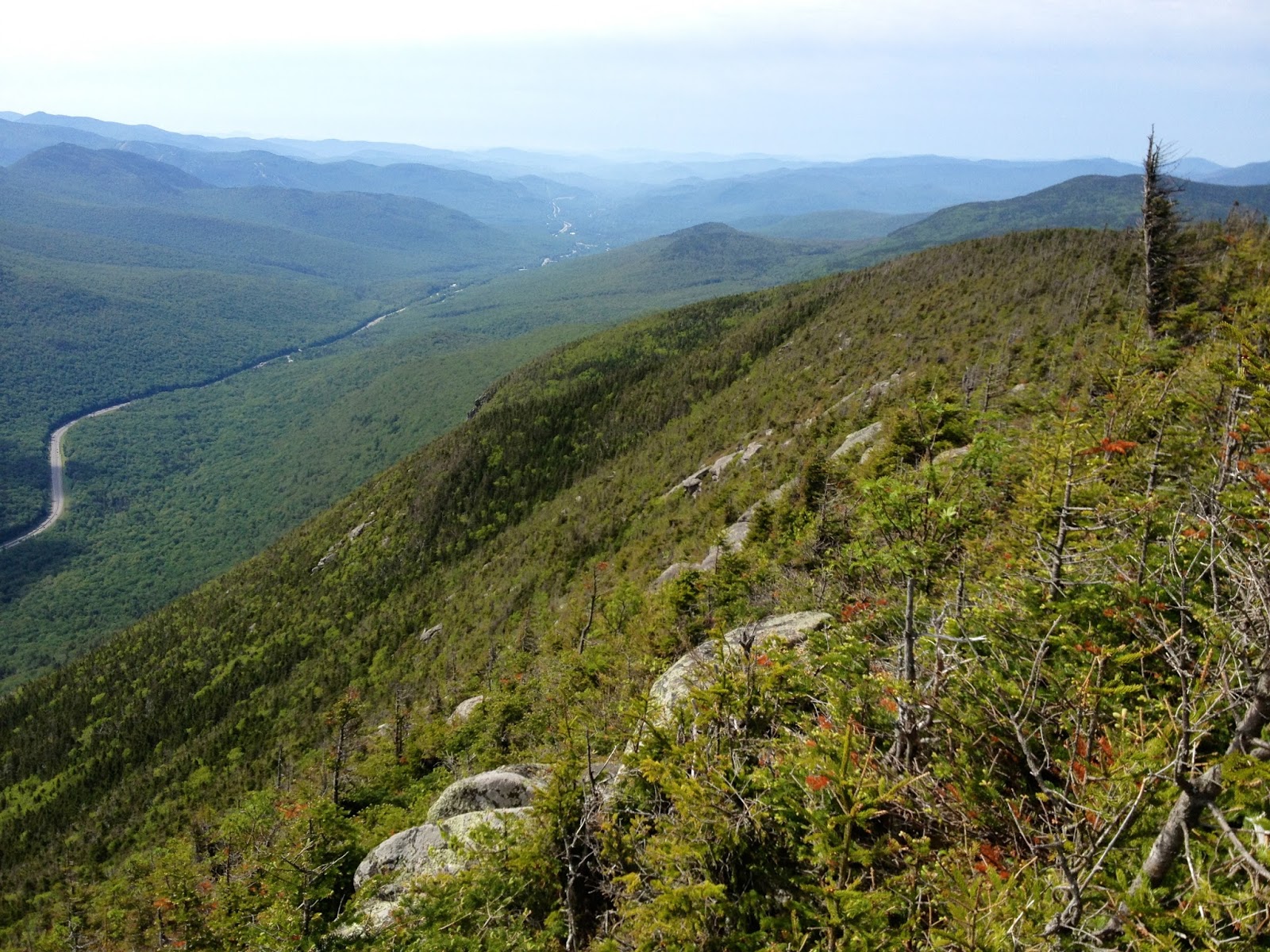 Where the Bicknell's live: Krummholz pine above 3,000 ft in northern New Hampshire.

It's probably our most secretive thrush, and is more often heard than seen. And it's not common - the small population in the Northeast was split from the more abundant, northwestern Gray-cheeked Thrush. The main difference between the two is habitat preference and song. Oh - and their sex lives! Bicknell's practice polygynandry in which the female mates with more than one male - and then she keeps all those males around to help around the nest. Sweet!

It wasn't long after climbing out of Ketchup that we started hearing the characteristic nasal call - "vee-ah" of the Bicknell's. Then a few started singing - a beautiful, raspy phrase that slurs upwards at the end. We found a pair of that were duetting together - alternatively singing. And finally one came out of the krummholz to investigate us. We got quick, but great looks - enough to see the gray face, delicately spotted belly and reddish brown upperparts. Very cute bird!

We also had a small family of Blackpoll Warblers up on the summit, including this male singing atop one of the confiers… 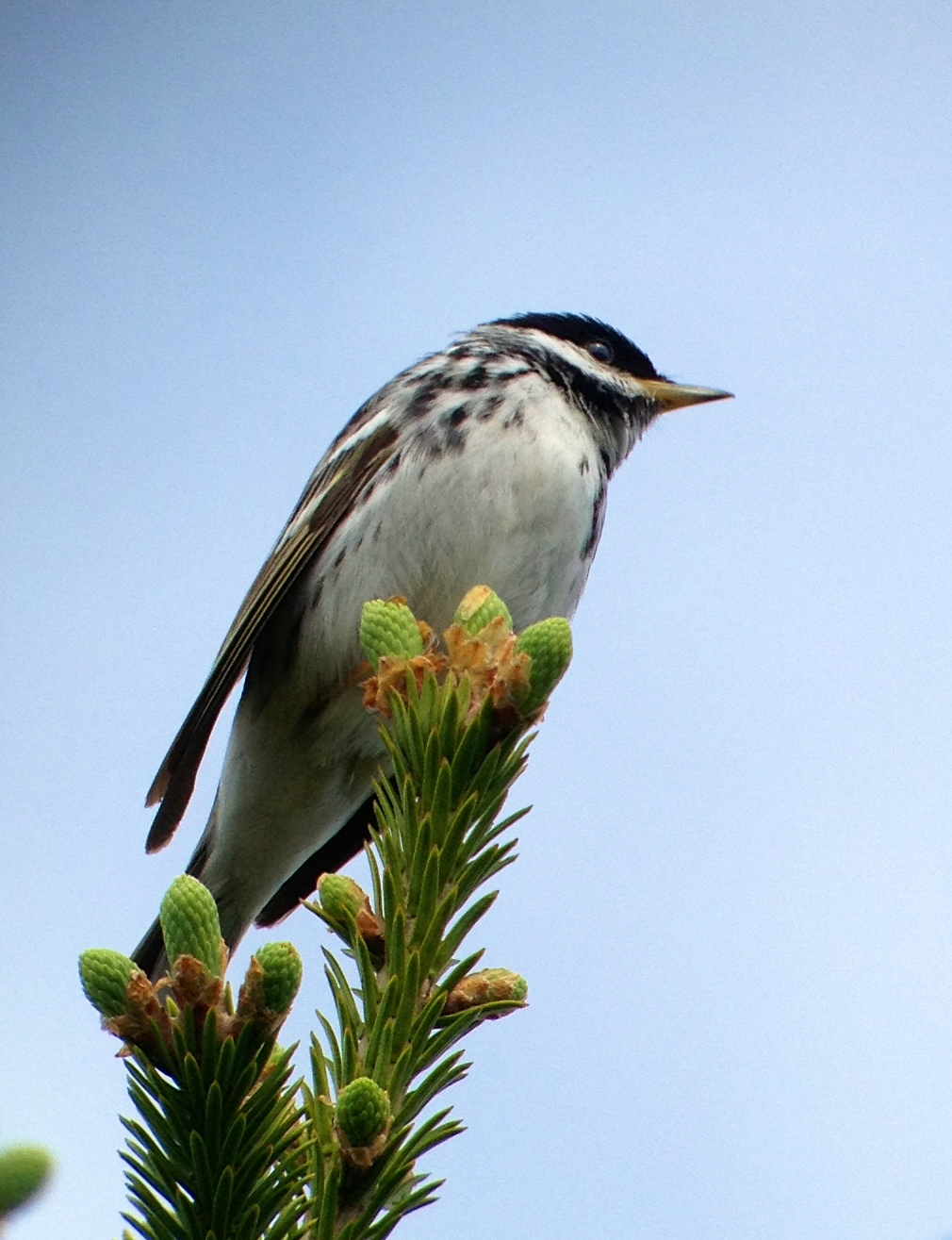 Then we started hearing large numbers of juvenile Homo sapiens. In environments like this, they can be particularly loud and annoying. Definitely not as skulking as the Bicknell's. We took the next tram down.

Our next stop was a quick one - to see the recently-reported Black-backed Woodpecker nest, only 6 miles from Mount Cannon. We arrived to find one adult flying away from the nest tree and the sound of baby woodpeckers begging for food. Ten minutes later and the adult (a male - with a golden-crown) was back with a caterpillar. We watched as a hungry chick stuck its bill out of the hole and accepted the morsel of food. Here's the adult at the site… 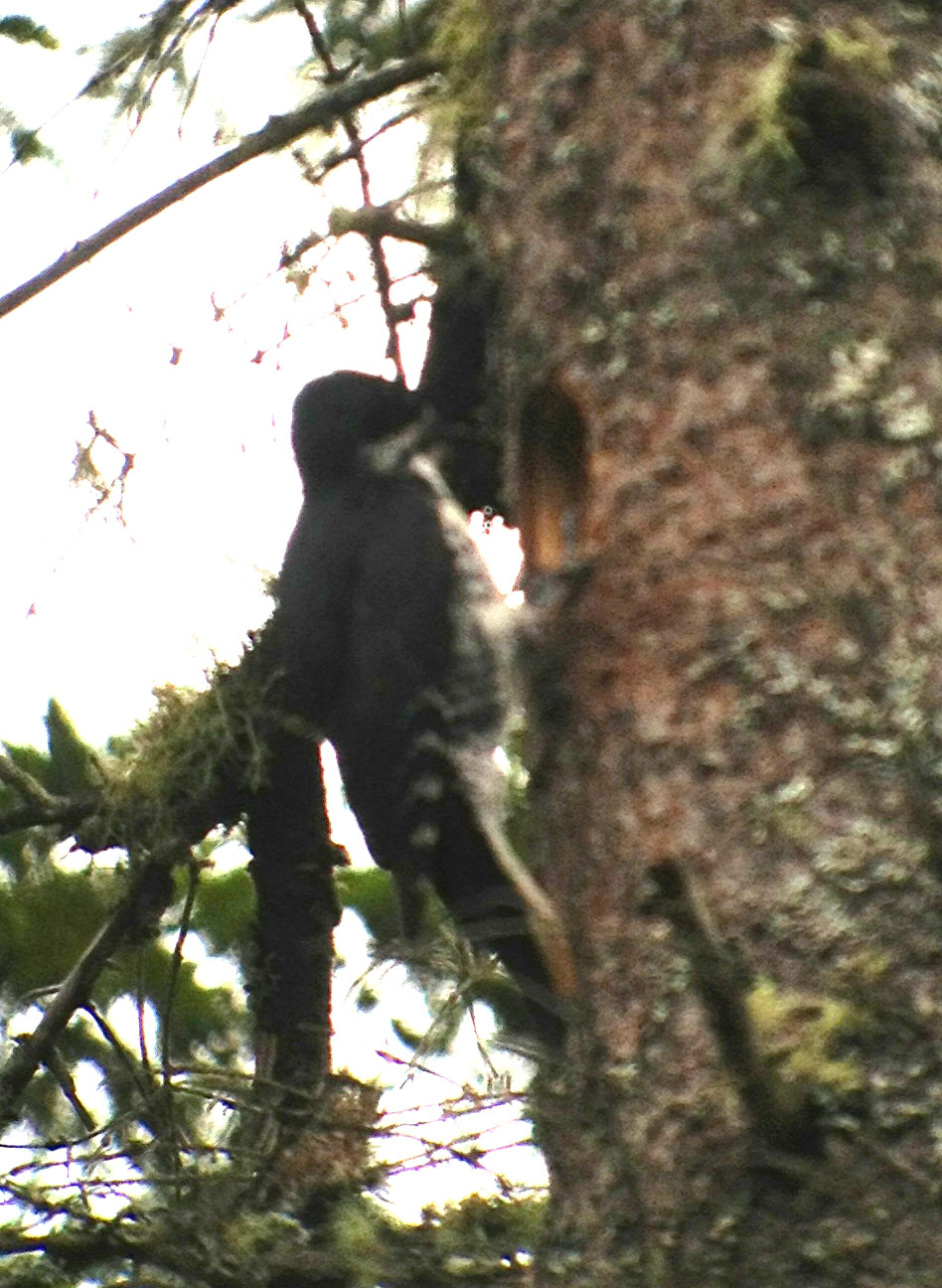 Black-backed Woodpecker (male) at the nest hole.
(Actually my second this year, after finding one in Ottawa in the snow.)

We stopped for lunch in the busy and touristy town of North Conway. There had been recent reports of bears in the area. Despite searching hard with my super bear-spotting binoculars (which very handily - for packing purposes - are also my super bird-spotting binoculars too) I couldn't find any bears… 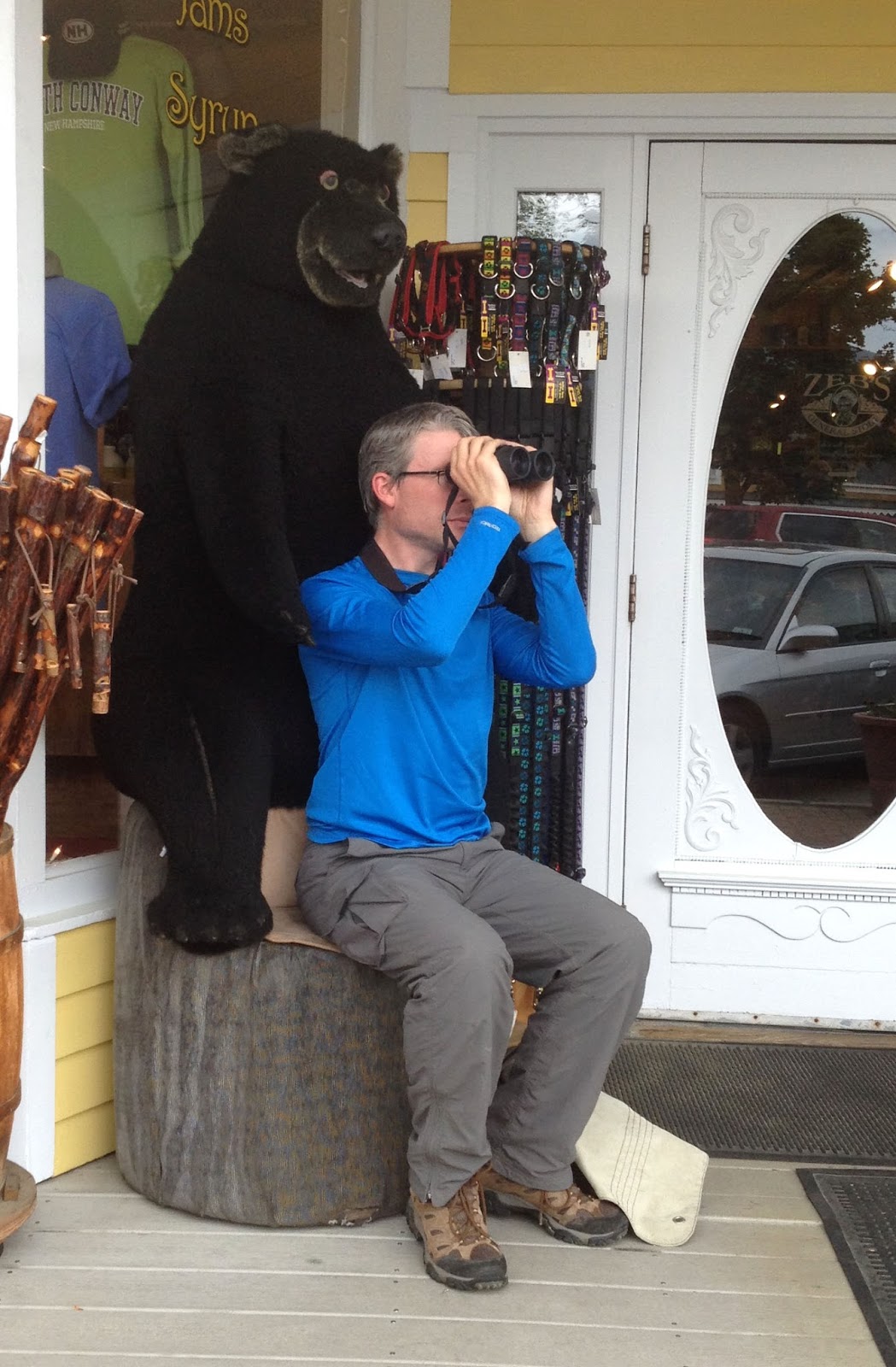 "I heard there were bears here. But I don't see any."

Our final stop was Scarborough Marsh in Maine. This place is famous (among birders that is) as a nesting site for Nelson's Sparrow. I love sparrows. I love the identification challenges for such a large group of birds that are so subtly different. And Nelson's is even more fun for sparrow nerds as there are distinct subspecies. The majority of the birds (nelsoni) live in wet marshes and fields of the Mid-west. We have a small maritime population - subvirgatus - in salt-marshes of coastal Maine and Canada. These birds are paler than their mid-west counterparts and with longer bills.

Nelson's has a distinctive, insect-like call - "p-tssssshh-uk". We started hearing it about 3/4 mile into the marsh. Then we started seeing birds peeking out of the short Spartina marsh grass. Here's the bird: 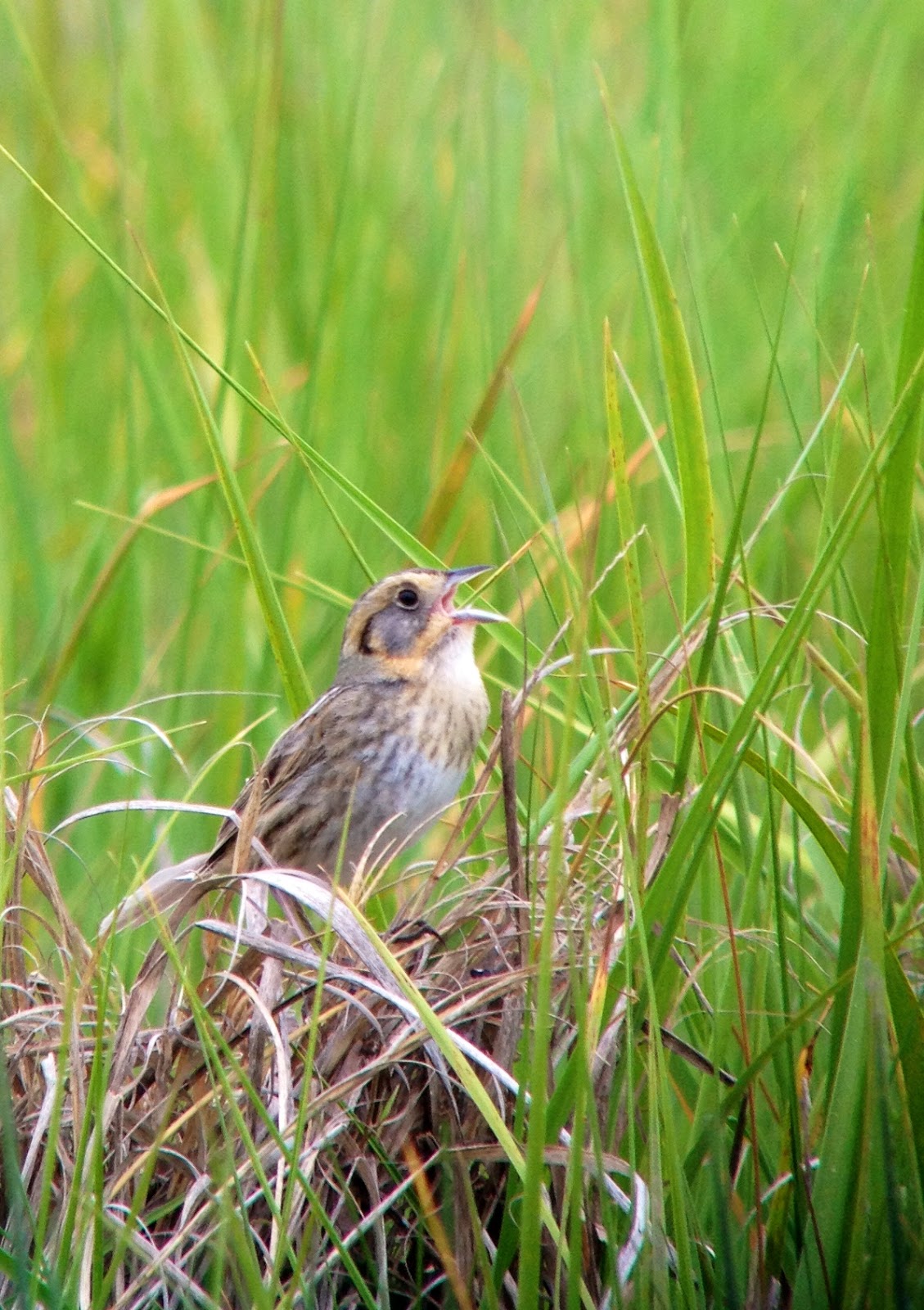 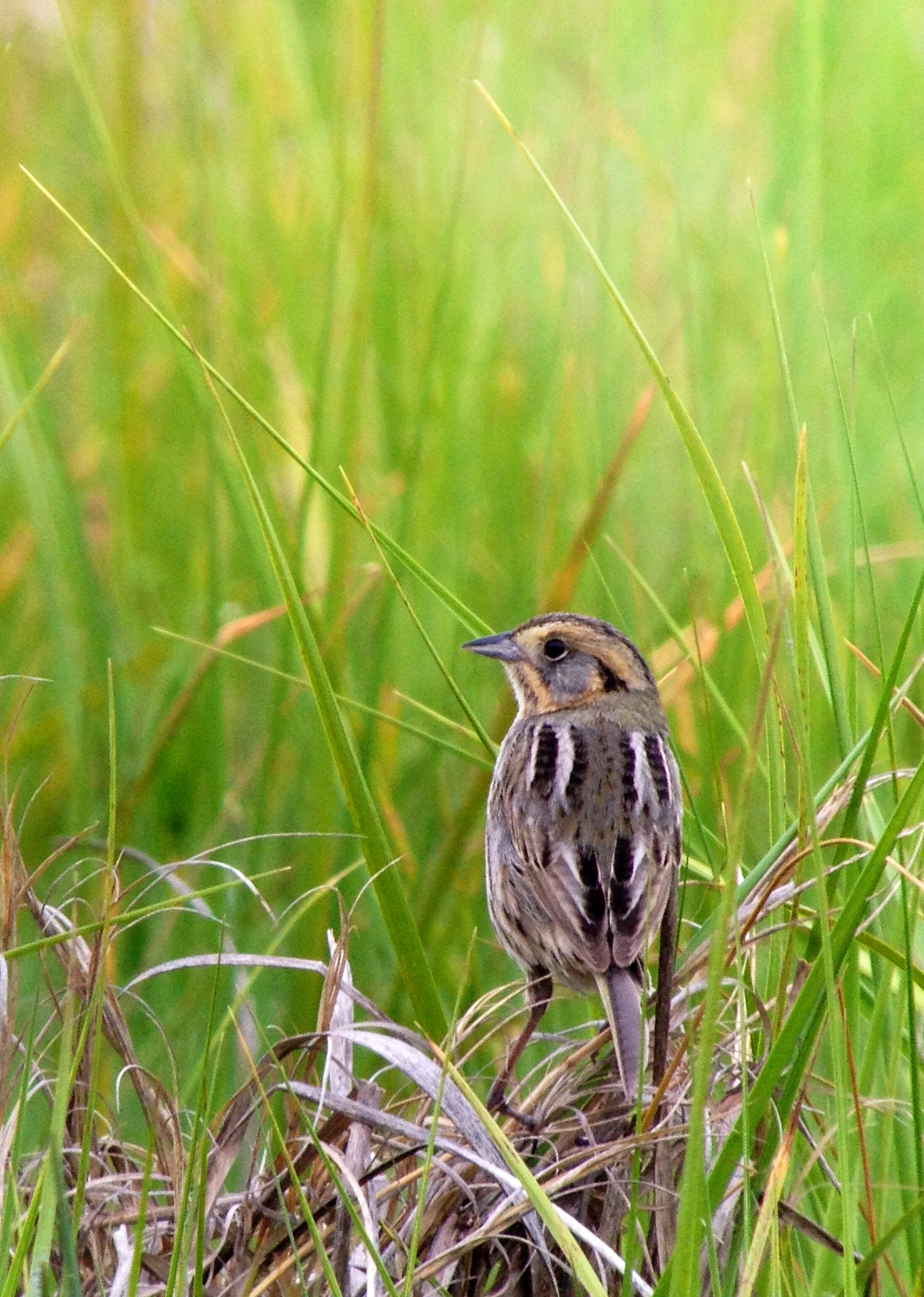 Nelson's Sparrow. Notice the orange face with clean supercilium (eyebrow).
(The similar Saltmarsh Sparrow has streaks in its supercilium.) 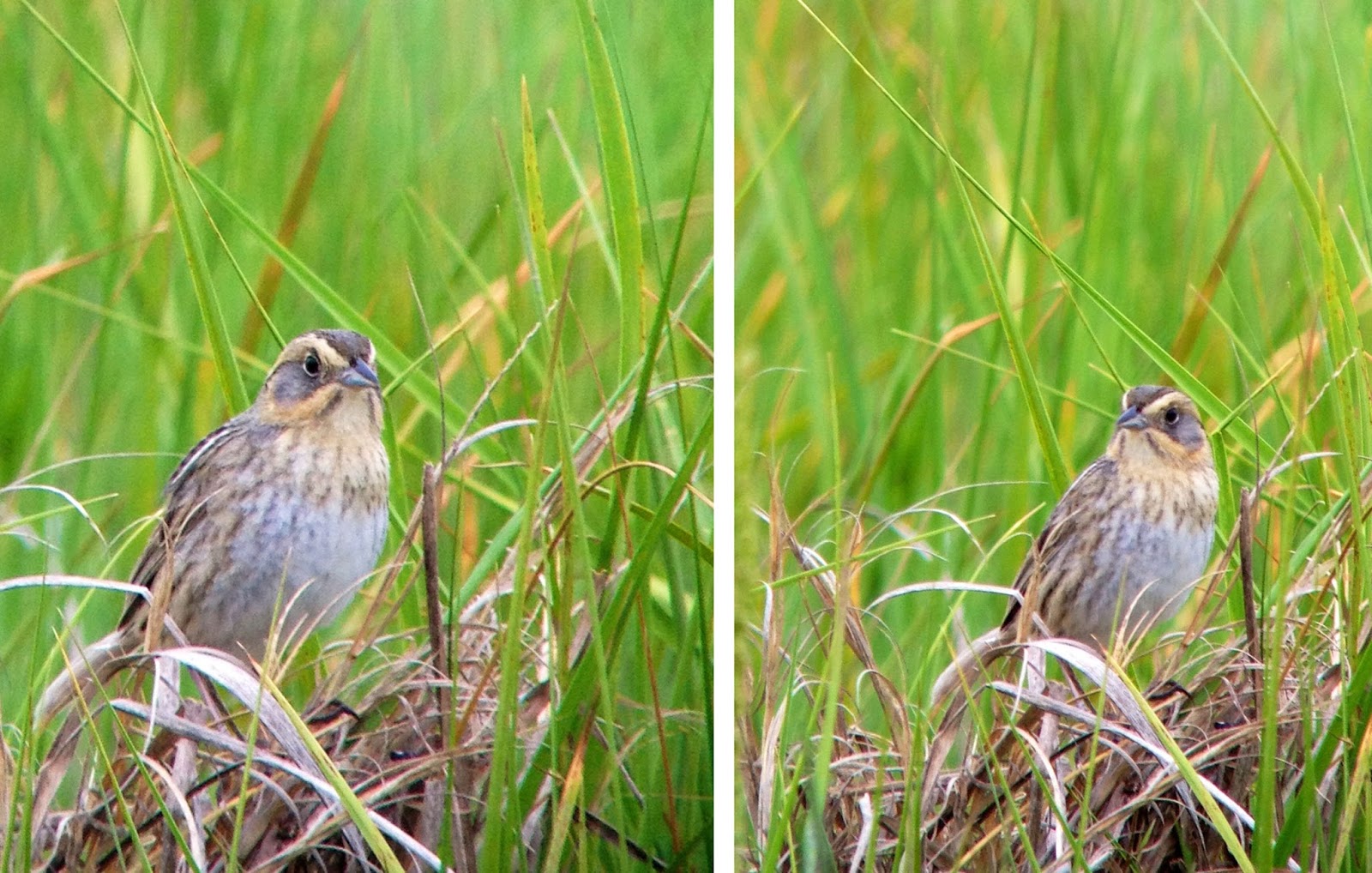 The Atlantic subspecies of Nelson's is subvirgatus.
The birds are pale with indistinct streaking on the breast and sides.

And with that, I'm one bird away from completing the sparrow set (all 33 of them.) And if it were not for the rain, we'd have stopped at Plum Island on the way back for the last one: Saltmarsh Sparrow. But we'll have to save that for another day...