BIRDING IN THE PRIBILOFS - SOME BIRDS!

And we're back! This time, as promised, there will actually be some bird stuff, bird discussion, and even some pictures of birds. Hard to believe we found time between all the shopping and fine dining, but there were some pretty good birds to see on St. Paul this week.


On our first day of birding here I managed to catch up with the Common Rosefinch which had been found a couple of days before. It was feeding on the putchkie and hanging with the Longspurs. 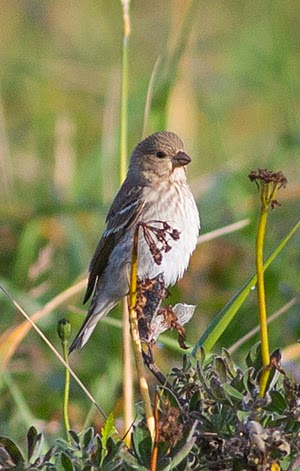 Another bird I was keen to catch up with was Common Snipe - a bird I'd missed at Gambell. Common Snipe love the muddy fringes of marshy pools, where they sit probing around for food while hidden in the grass. The only real chance you have of seeing them is if you almost step on it and flush one. Superficially similar to our Wilson's Snipe, they have a distinctive white trailing edge to the wing and whiter underwings - both of which you need a good view to see. The good news is that we flushed one right next to us that first evening. The bad news - I couldn't get on the white in the wing (a combination of poor light and some rather amateurish binocular work). I only saw the silhouette of a disappearing snipe. Foiled again! 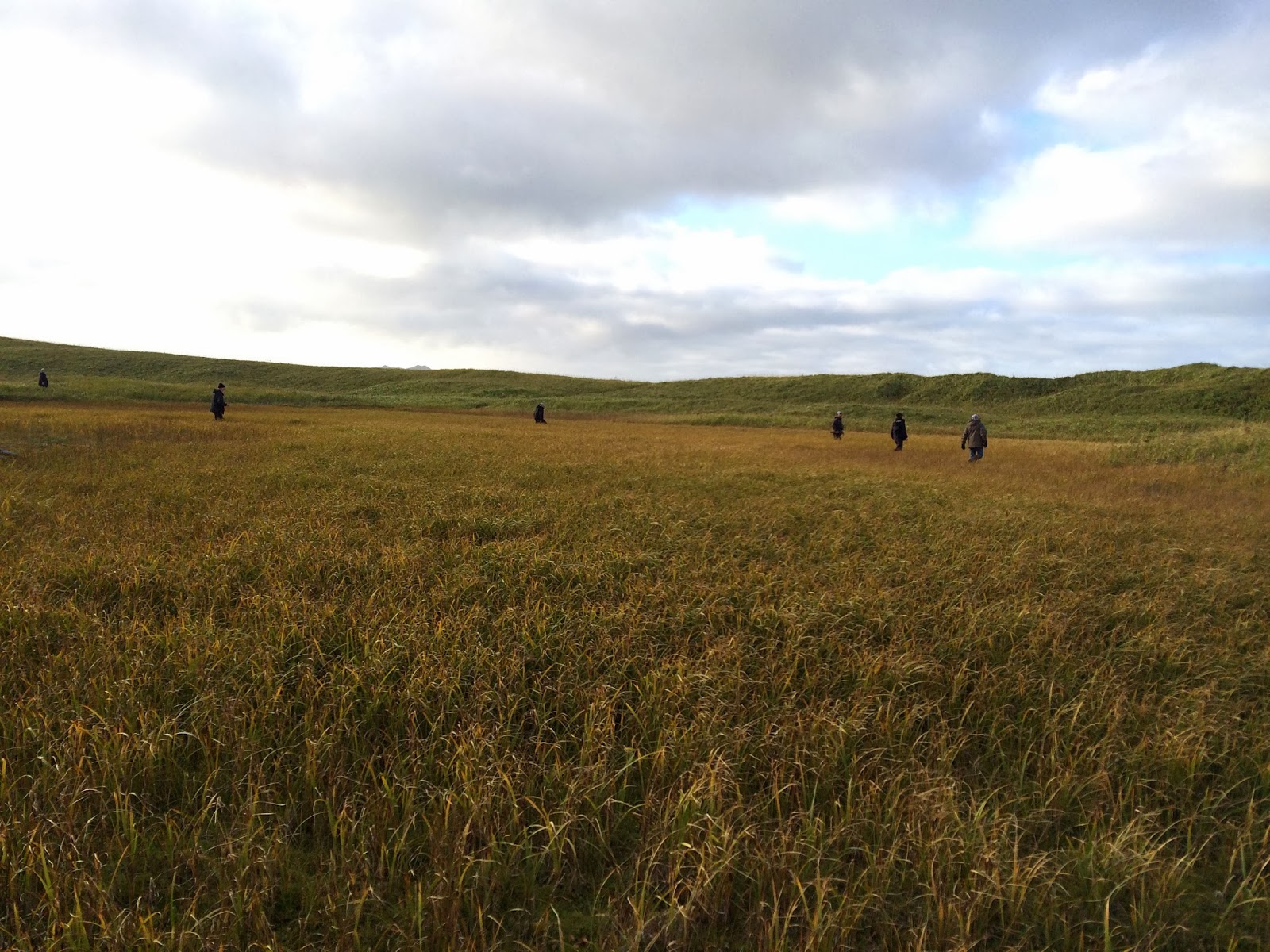 Stomping through marshes looking for Snipe

It's often windy on St. Paul. And often extremely windy. While this is a pain for the humans, it's actually helpful in finding birds. Birds aren't stupid - they'll take advantage of natural wind-breaks to seek shelter. Polovina Hill is a great place to avoid the wind, with one side of the hill gauged out and quaried for road material. As we pulled up to the hill on the second day, Scott Schuette refound a bird I'd really hoped would stay for my trip - a Gray-streaked Flycatcher. 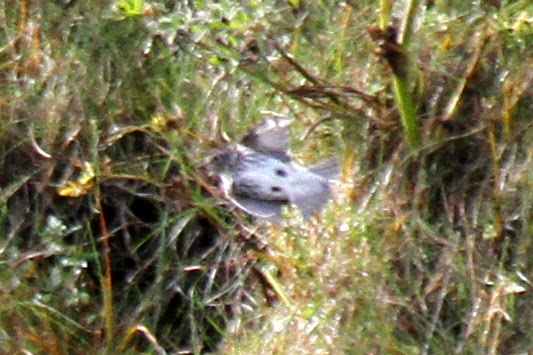 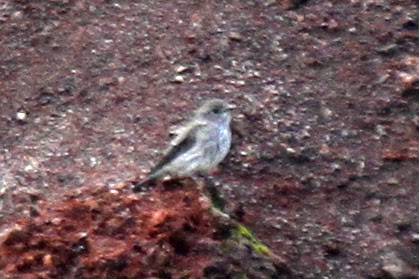 Gray-streaked Flycatcher- an insectivore from Asia
(photos by Laura Keene)

That's two new birds in two days! Pushing my luck, we tried again for the snipe. This time though we had perfect light to see the white on the wing. The only thing missing was the wing. And the bird. Anyone care to guess what my nemesis bird might be this year?

Birders come to St. Paul to see Asian vagrants - birds that have got lost, or more likely blown off course, from Asia into the Bering Sea. (Russia's "only" 500 miles away.) And as birds are on the move to winter grounds, fall is a great time to be here. Among the more common vagrants are Bramblings. There were at least 6 over the past week. These are black and orange finches that breed in birch forests on the Russian side of the Bering Sea, and apparently often get lost in it... 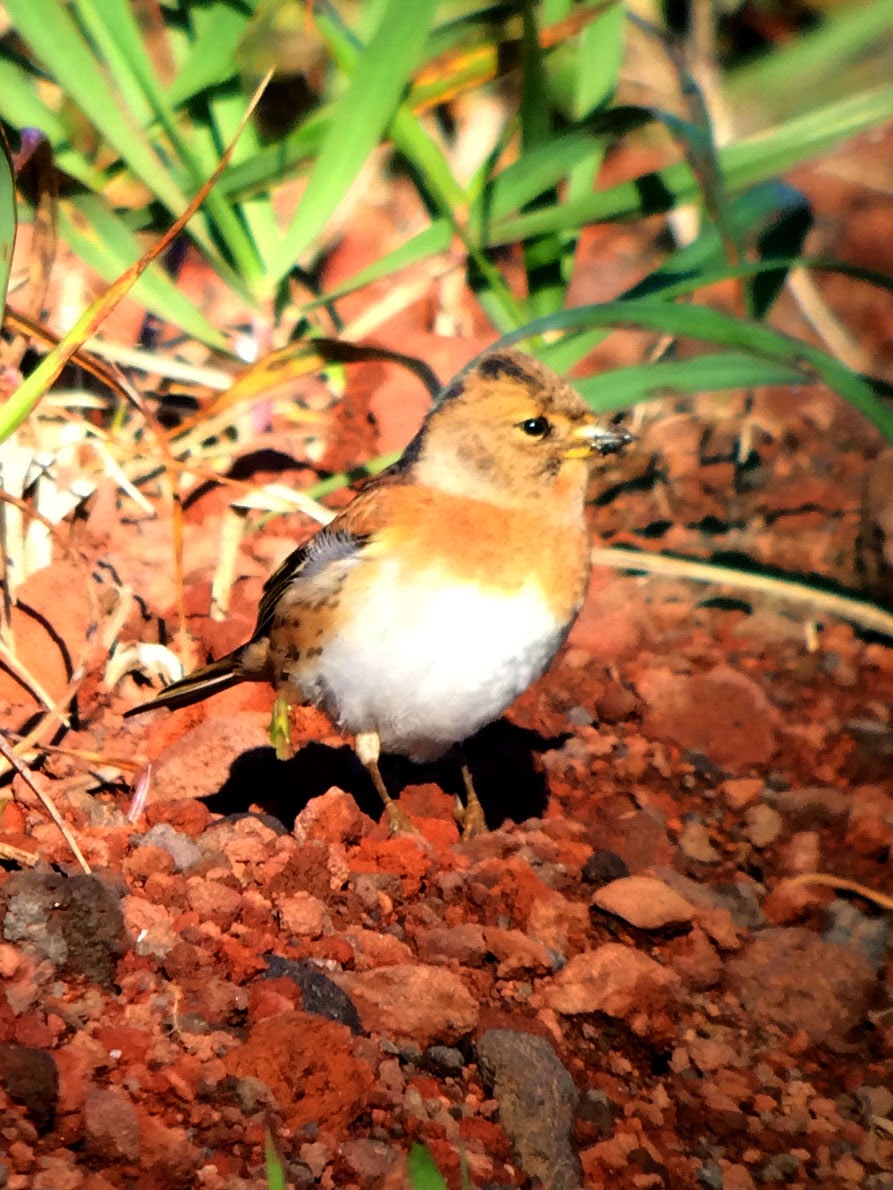 Brambling - one of the more common Asian vagrants

One of the really rare birds on most visitors' wish-lists is the White-tailed Eagle. This bird turned up last spring - a first for the island - and stayed. It's been seen all over St. Paul since then. It's not known where or even whether it has a regular roosting spot. There's no real strategy for finding it although (i) being outside and (ii) looking up can both dramatically increase your chances. As can a little luck. And we had some of that on the second day... 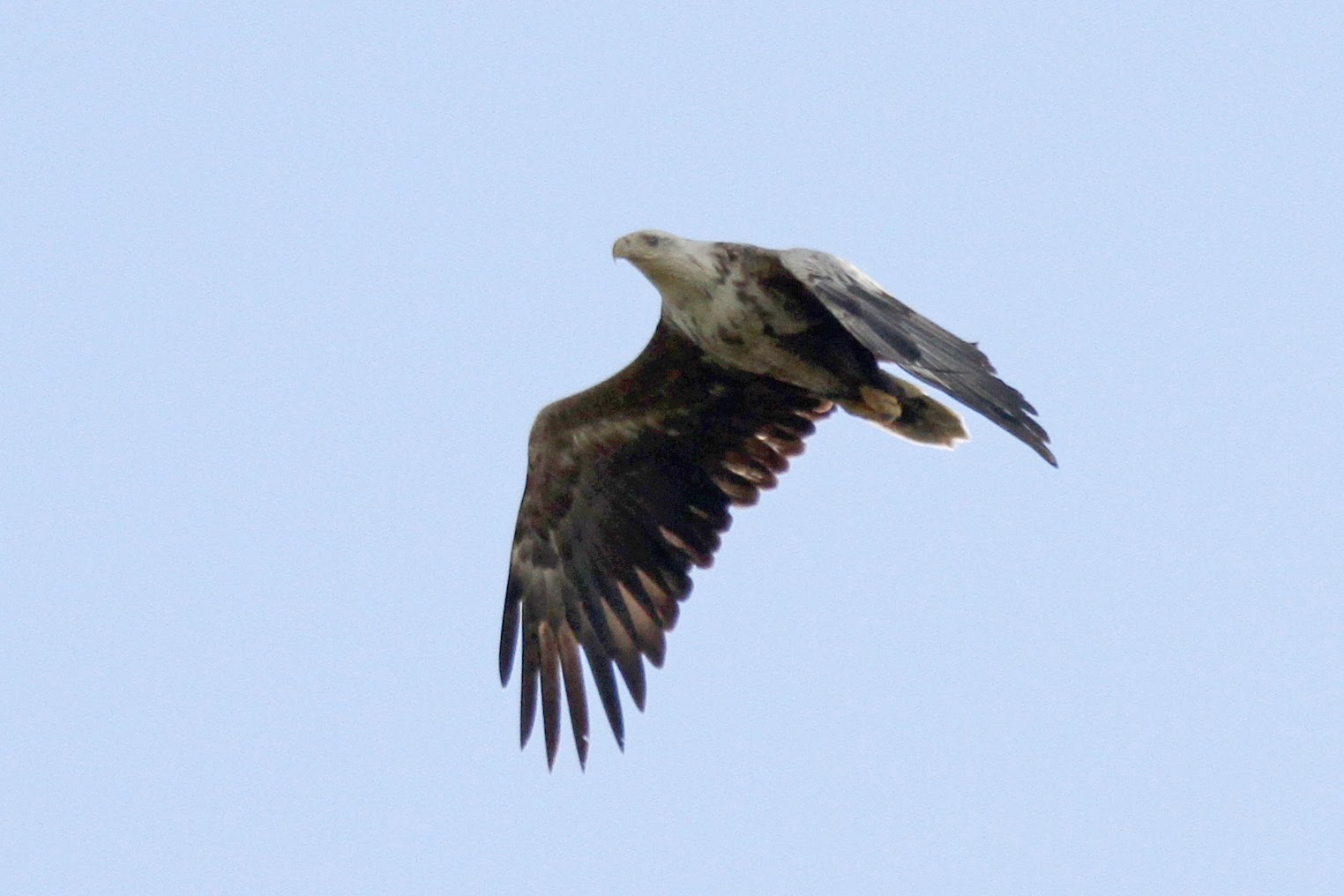 When there weren't birds to find there was plenty of other wildlife to enjoy. The Pribilof Islands host the bulk of the world's breeding population of Northern Fur Seals. In summer, the breeding "rookeries" are teeming with these slippery guys... 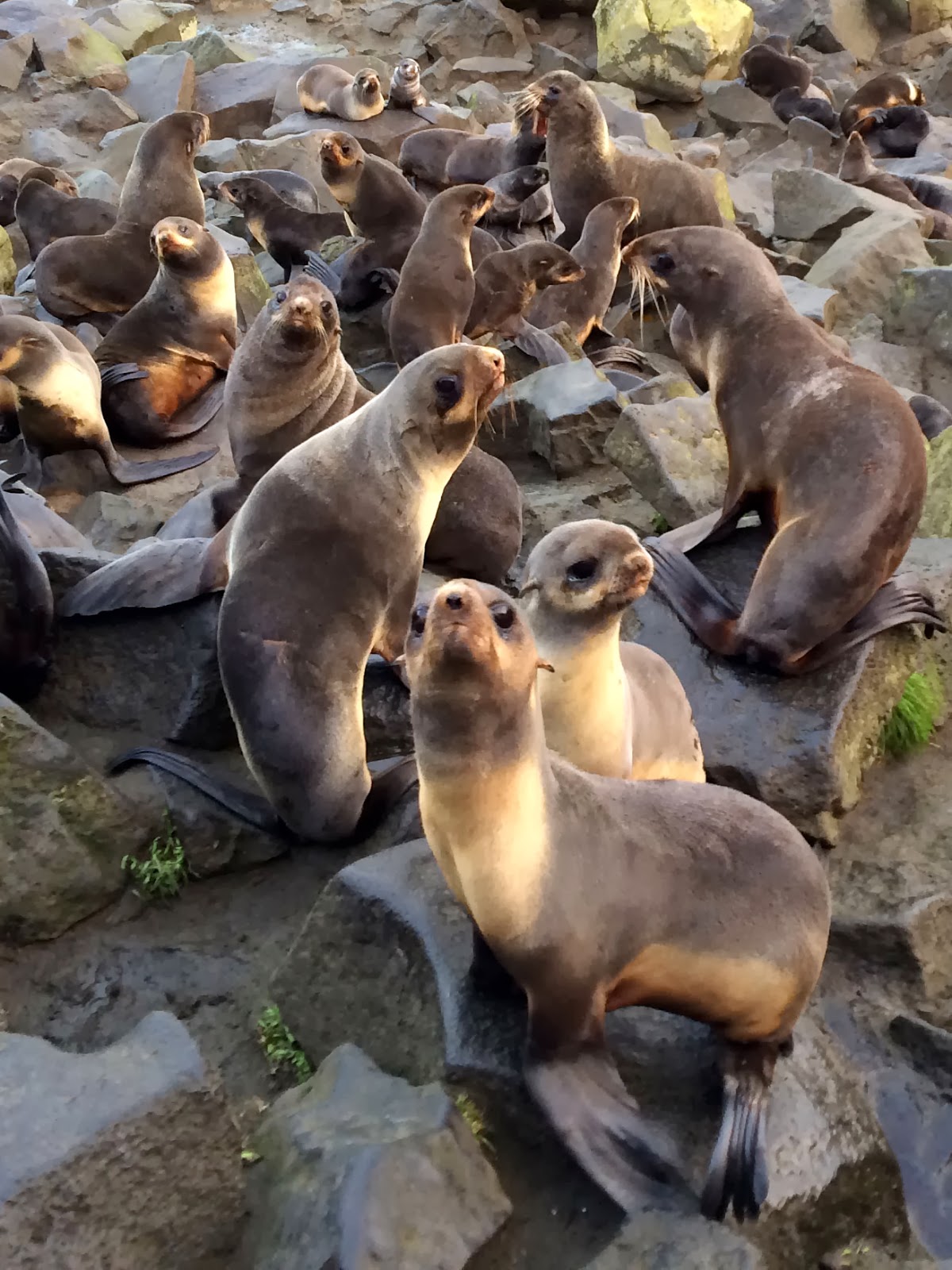 Fur Seals used to be hunted for their incredibly thick pelt (300,000 hairs per square inch!) They were one of the main economic incentives for the US to purchase Alaska from Russia (1867.) Within the first 20 years some 2.25 million seals were killed, mostly on St. Paul, and mostly females, which also caused their dependent pups to die. There's now less than a million of them in the whole of the Bering Sea / Pacific - and they're protected under the Marine Mammal Protection Act. 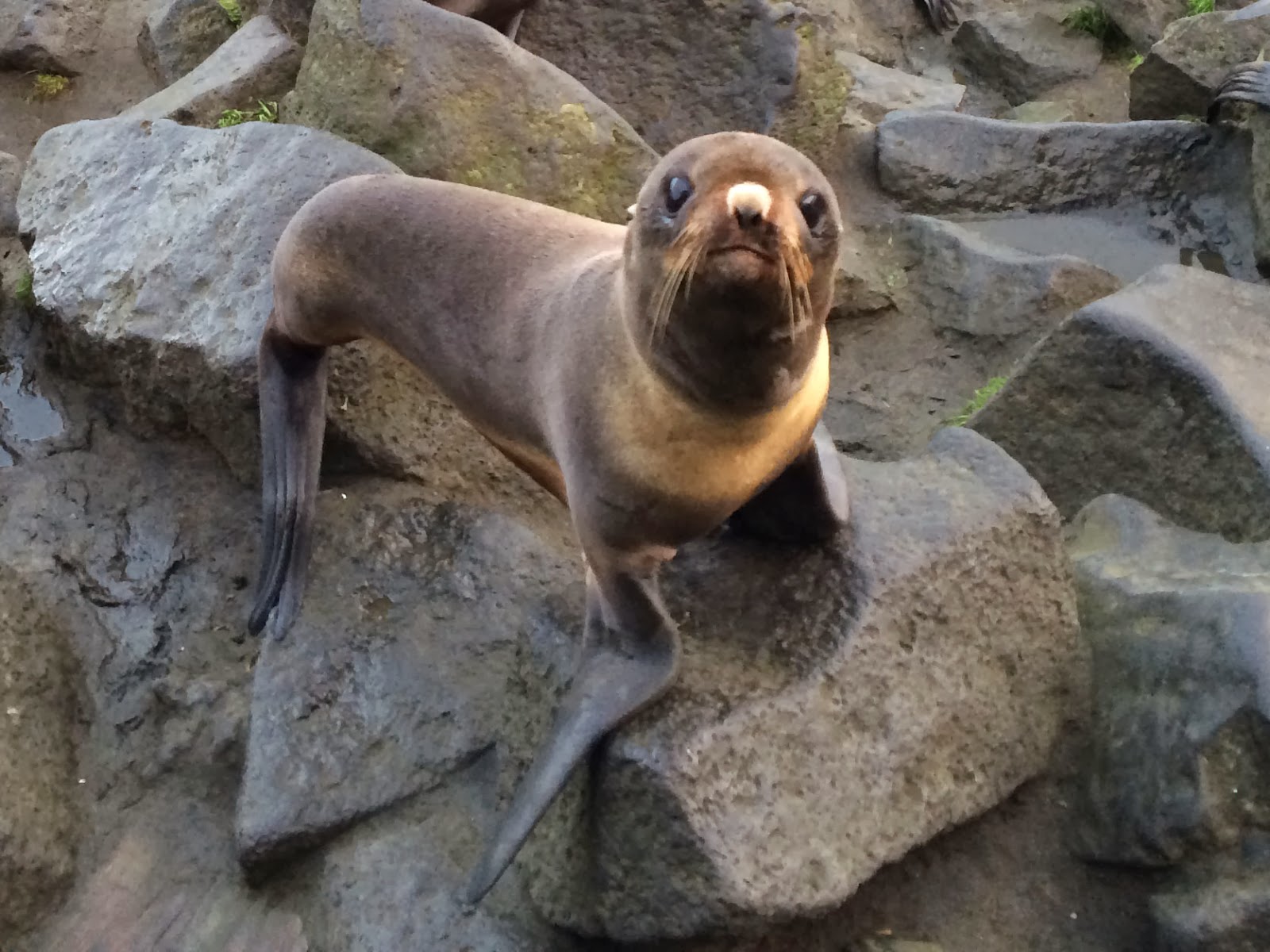 With that number of seals in the water, it's no surprise that they attract predators... 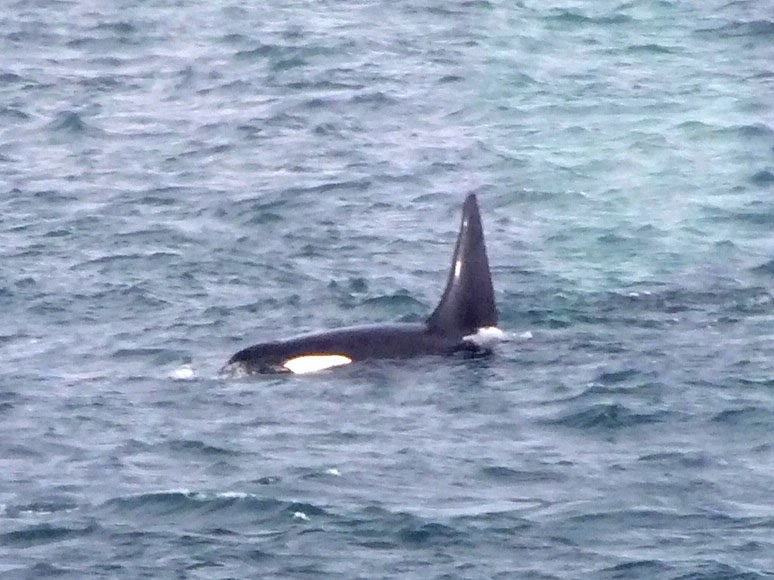 Orca (Killer Whale) - on the lookout for seals.
Orcas are toothed oceanic dolphins and apex predators, having no natural predators themselves.

Of course - there were land predators too... 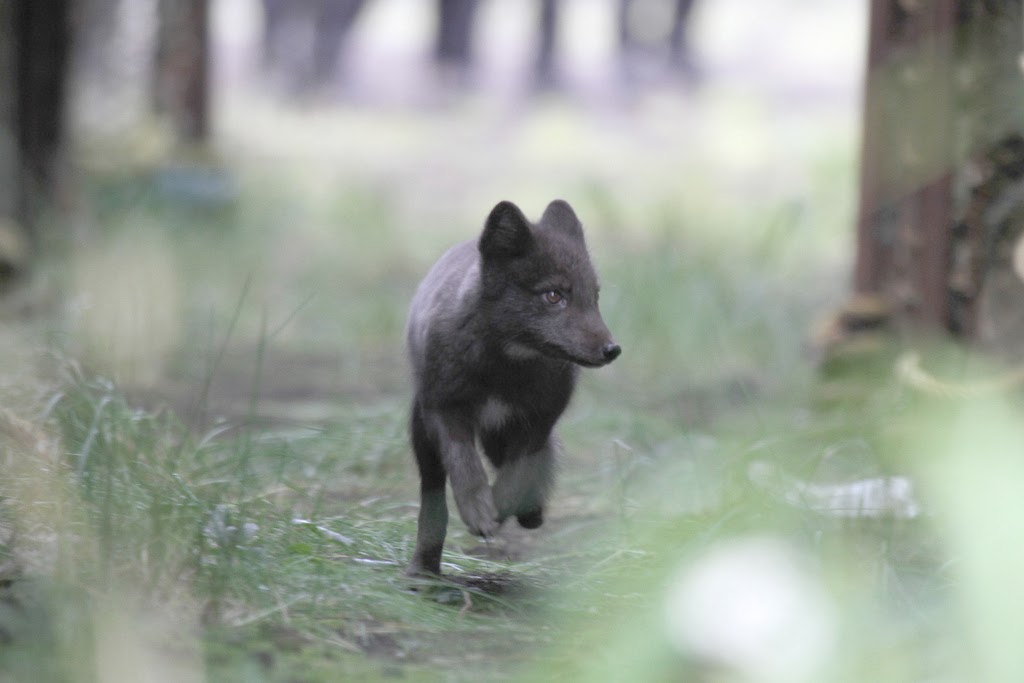 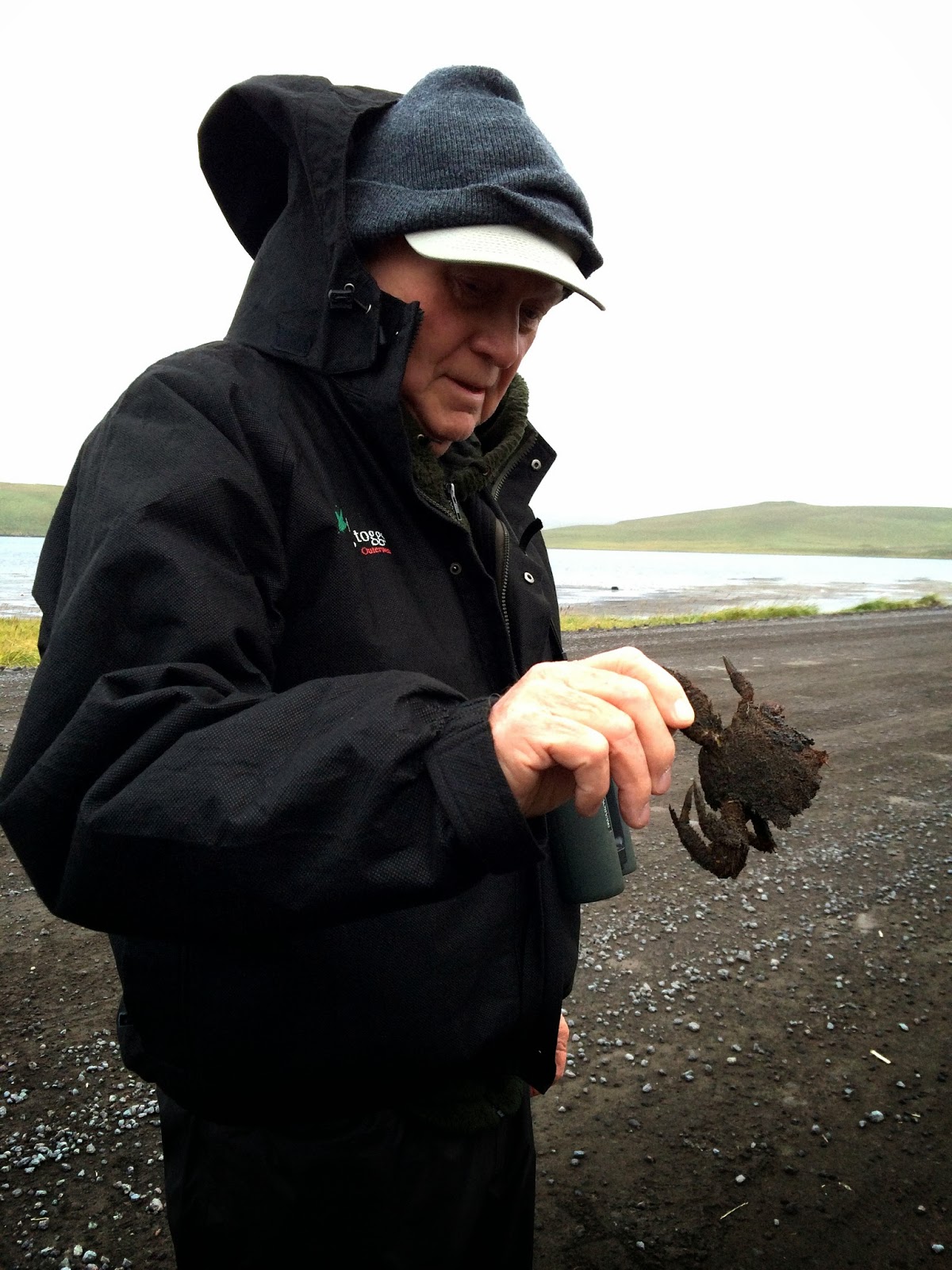 Paul Sykes with a crab.
(Or crab with a Paul Sykes)

On day 3, we headed to Marunich, the northern shore of the island. Offshore was a huge flock of King Eiders (all in eclipse plumage.) Onshore, was an equally large flock of weirdos in winter plumage... 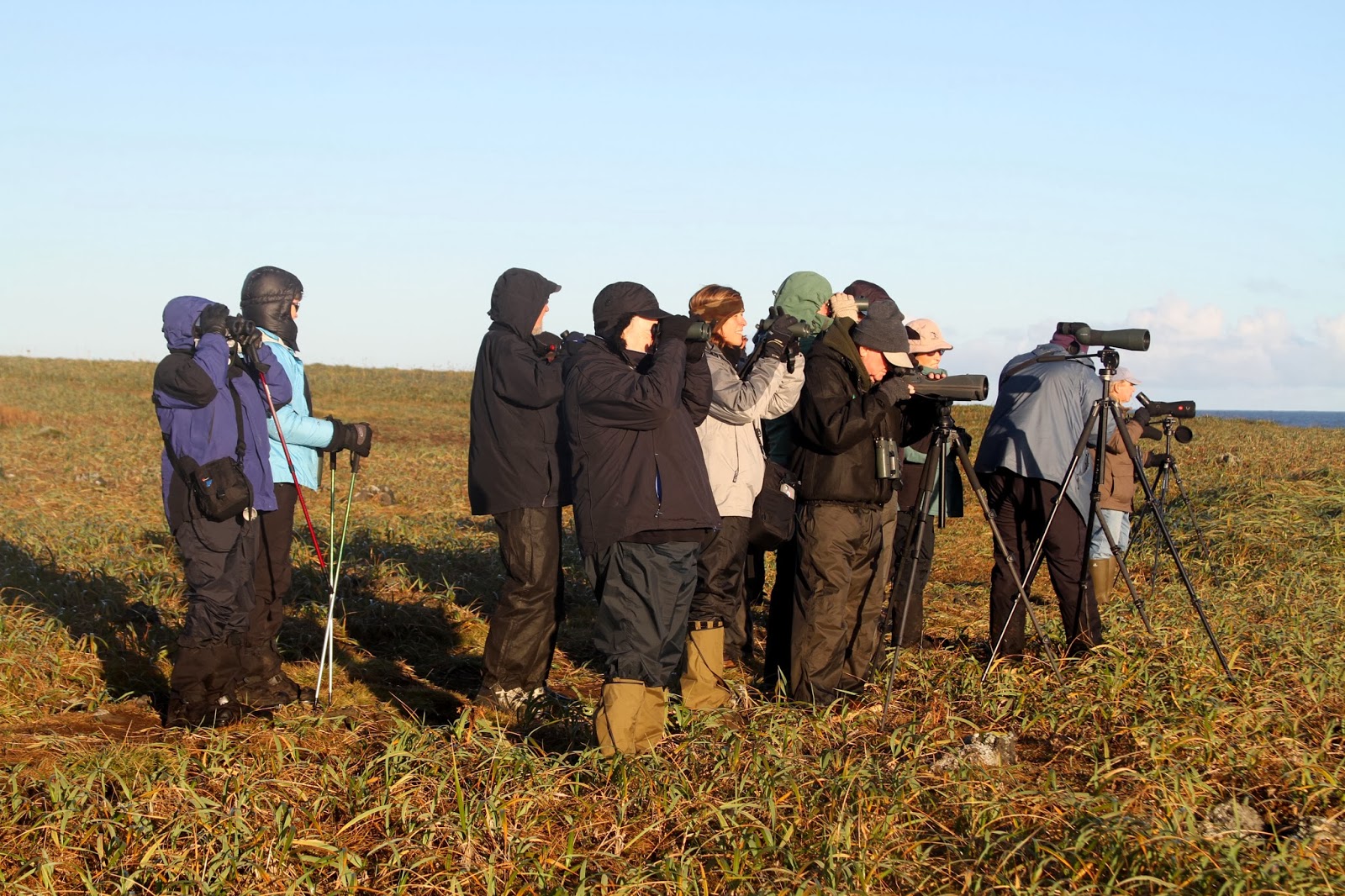 And it was here, at a small grassy pool, that I finally saw my Snipe. Gavin Bieber flushed a bird in the marsh and I managed to get on it as it banked and showed off its bright white trailing edge before disappearing over the ridge. Nemesis no more! 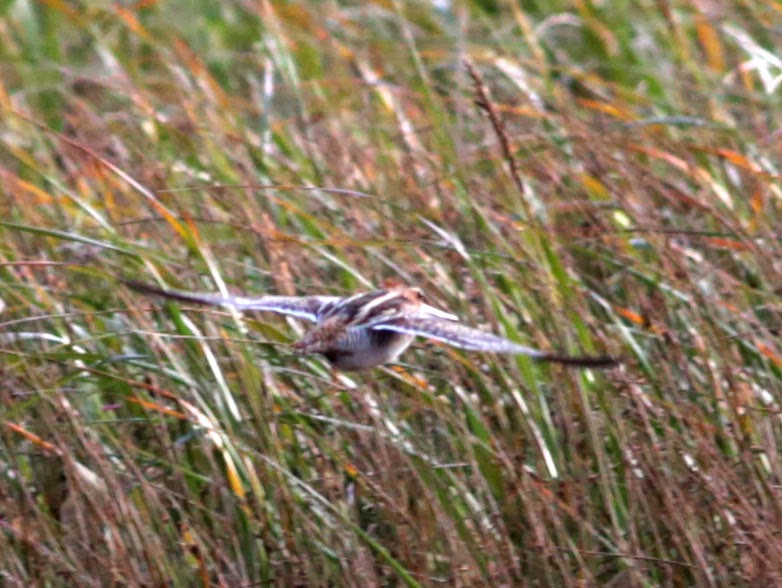 Common Snipe (common in Asia, not common here!)
Strong white trailing edge on the bird as it flies away.
(photo by Doug Gochfeld of a bird we saw later in the week.)

It's hard not to notice the bright colors as you're walking around the island. From spring through fall, there's a changing parade of flowers. At this time of year - purple is in... 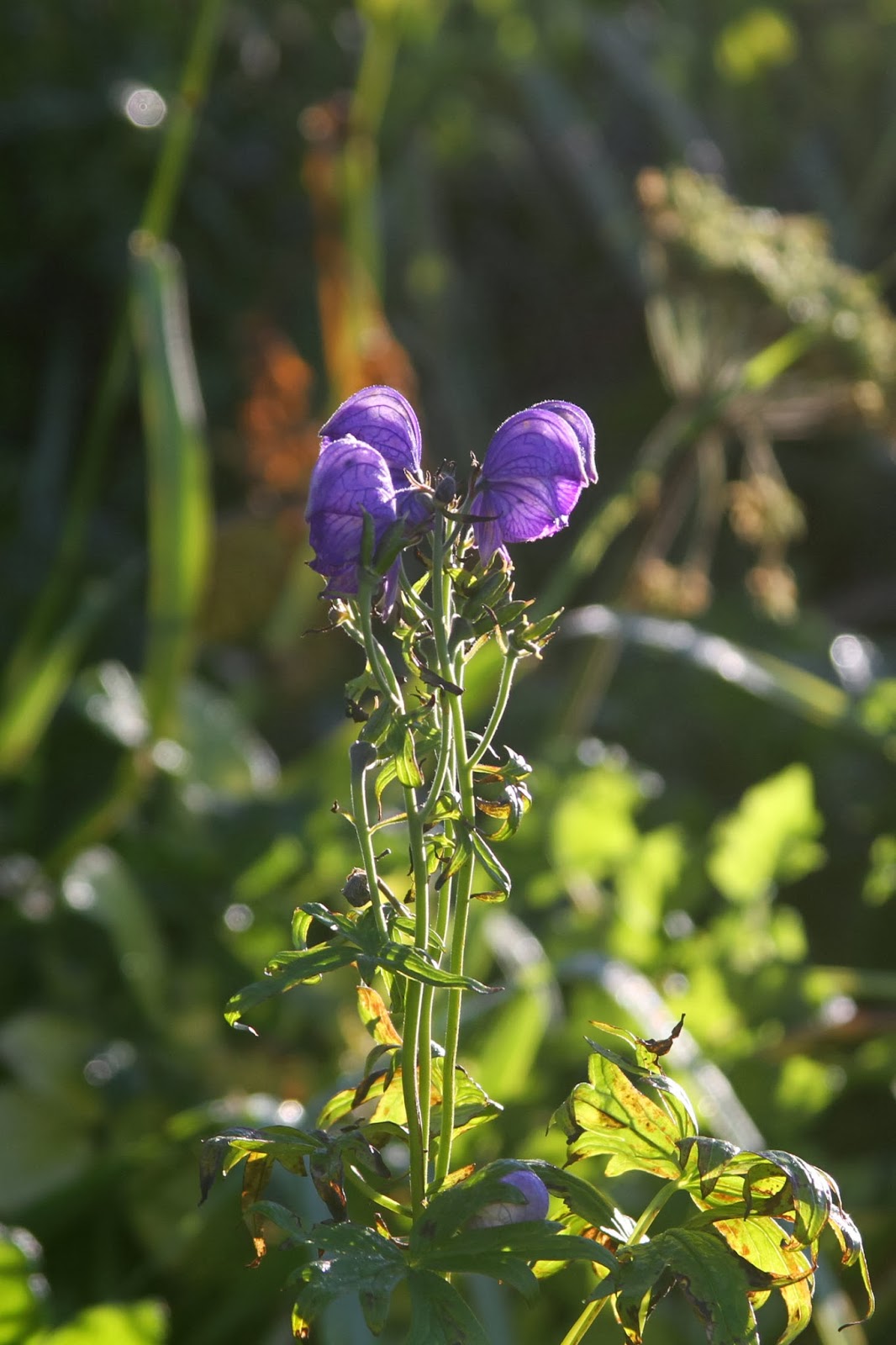 Monkshood - named after the shape of the petals.
Toxic. Its Latin name, Aconitum, means "without struggle" hinting at how effective a poison it is. Also known as Wolf's Bane as it was used to kill wolves (in Eurasia, not St. Paul!) 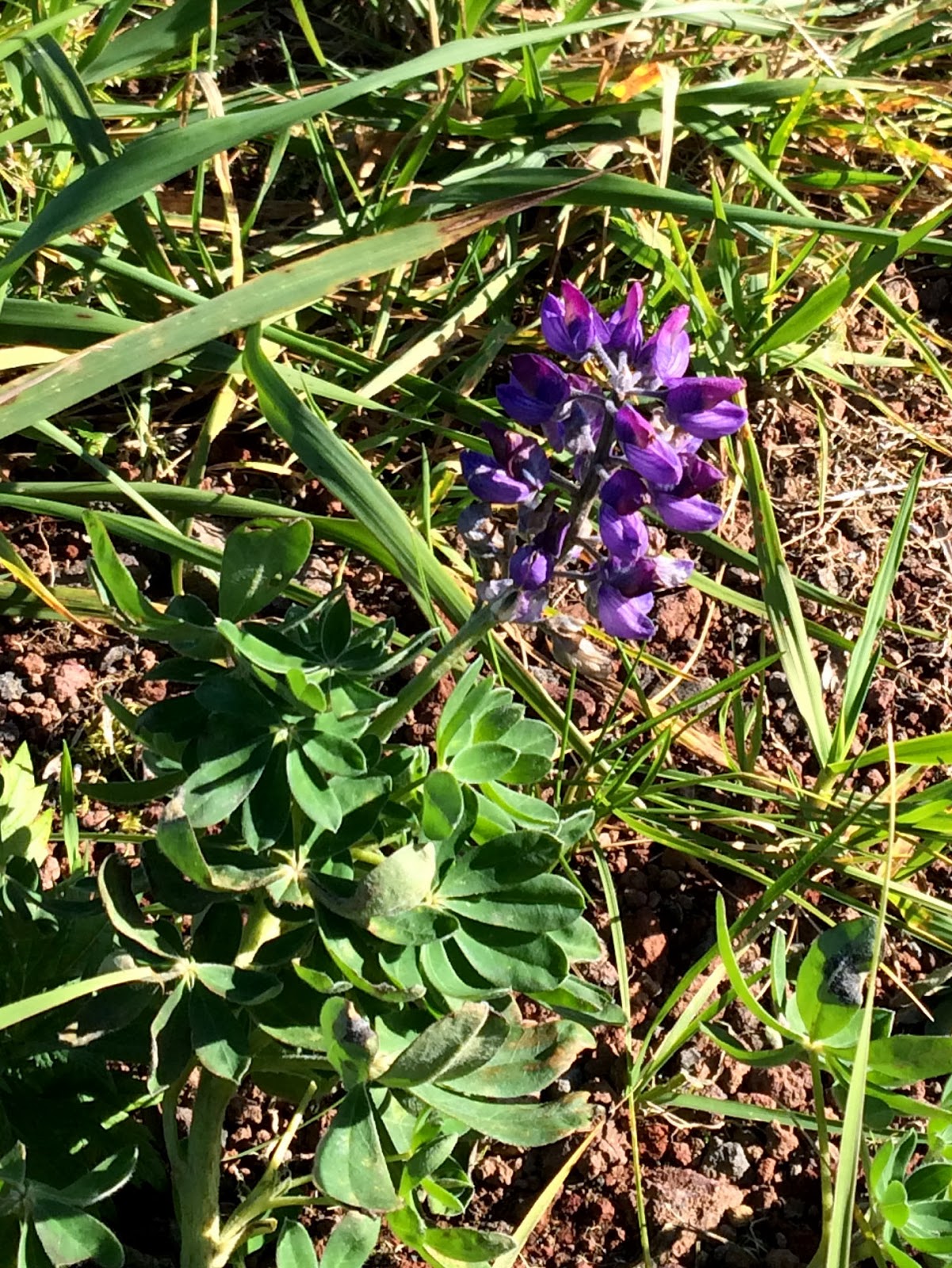 And the colors weren't just restricted to flowers.

With ever-changing weather and cloud conditions, we were often treated to some great skies. 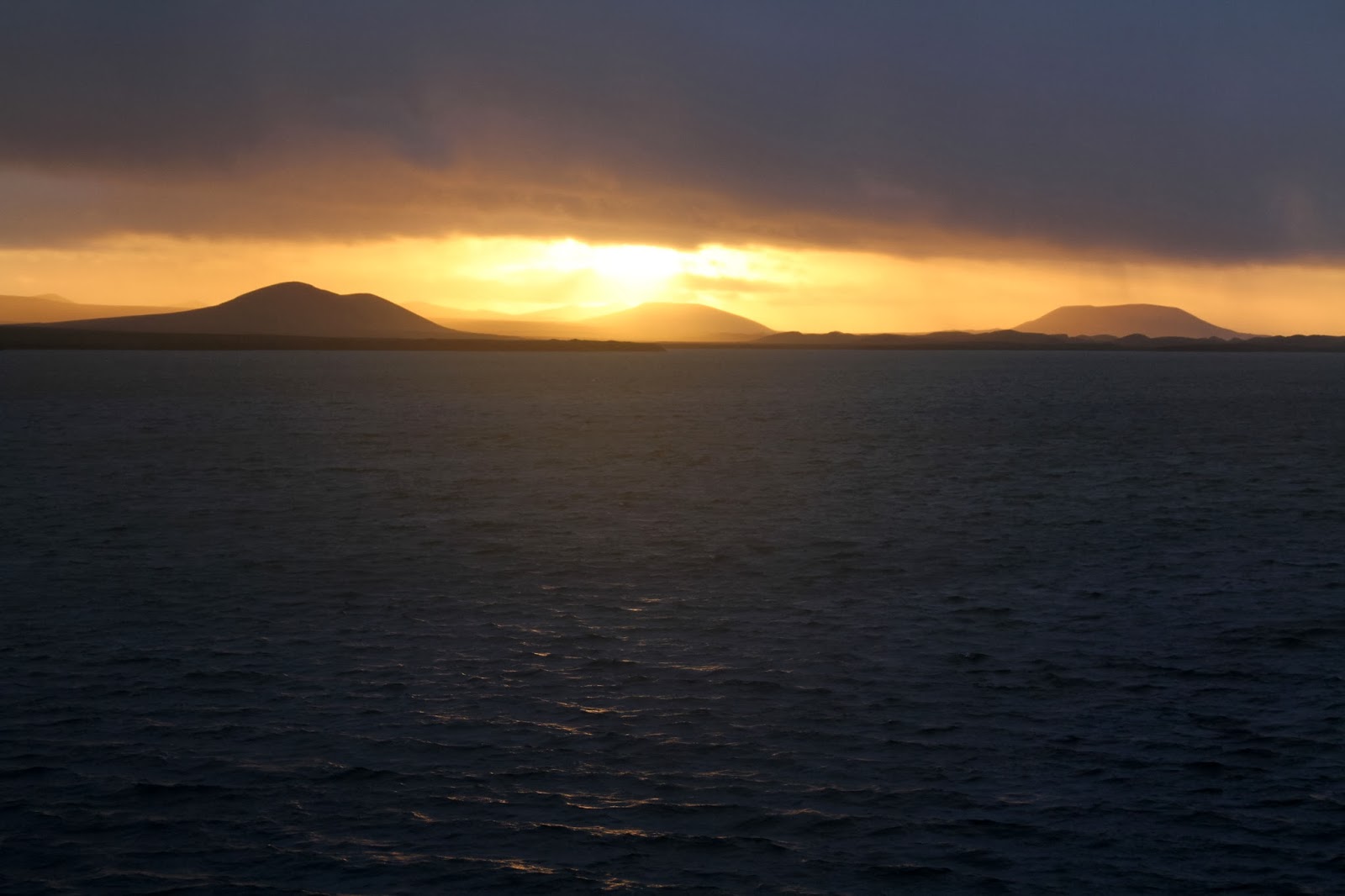 Hutchinson Hill, rising up on the northeast peninsula, is another great wind break. A cut in the hill offers a great hideaway for birds - especially as the guides put out seed and suet to entice them in. Every day we'd creep up on the cut and slowly peer in - hoping for something special... 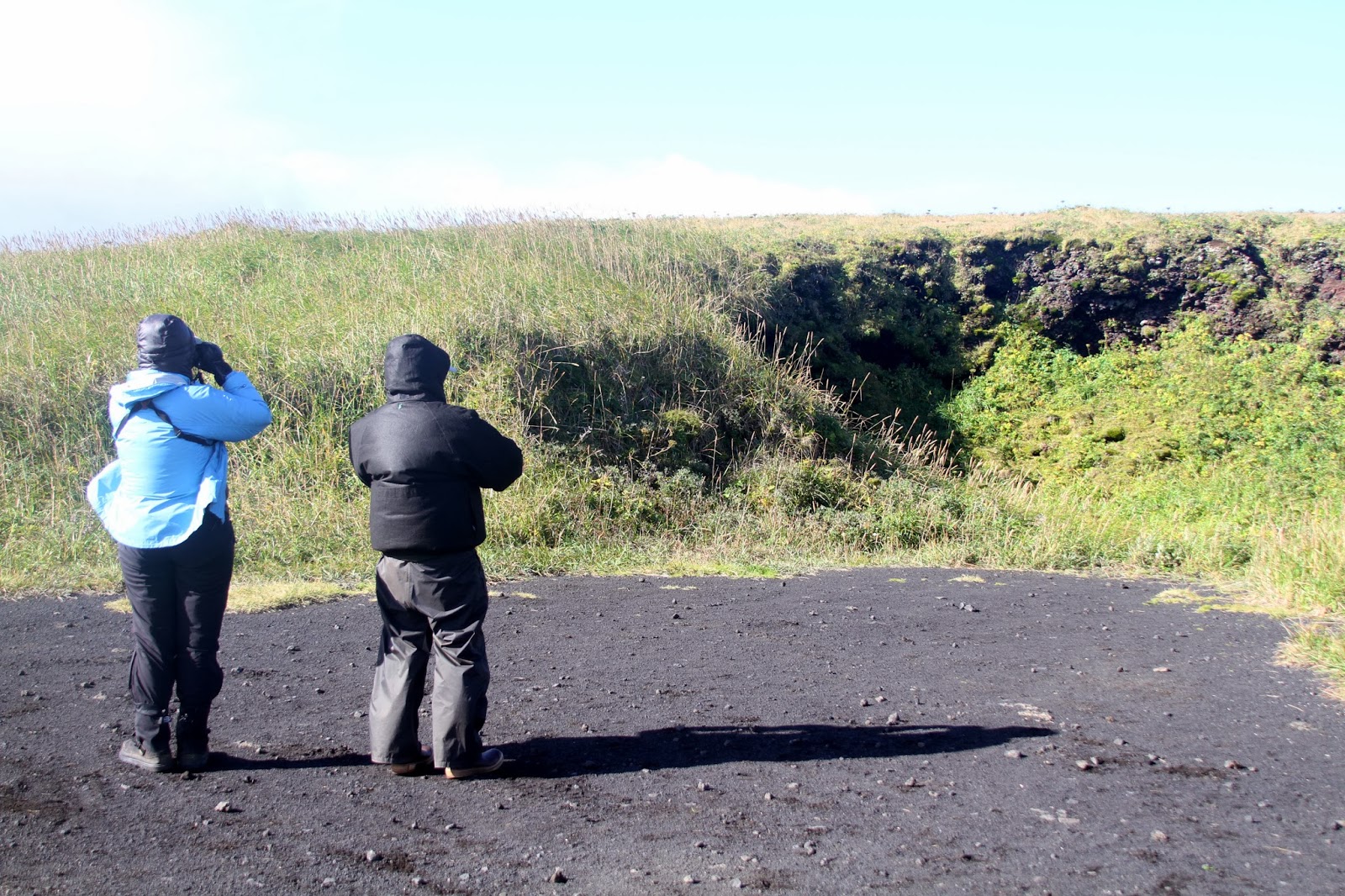 Peering into the cut 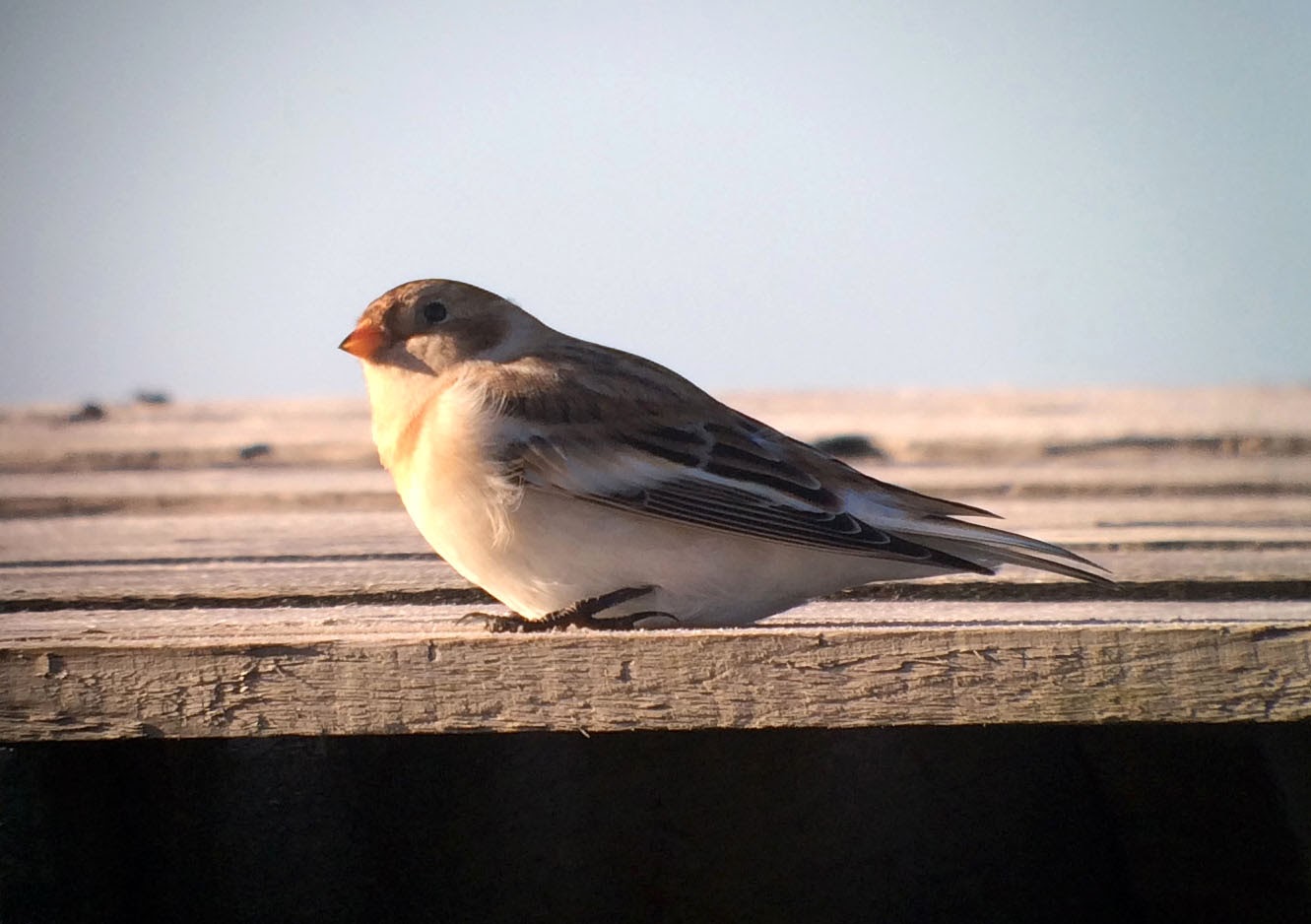 Snow Buntings - one of the more common birds on the island

But today Gavin Bieber had flushed a bird in the vegetation opposite. And it was a potentially interesting bird. We walked out in a line to where it landed. "Pipit!" Gavin shouted as a bird flushed, circled overhead and eventually landed on a rock, giving us enough time to photograph and identify it... 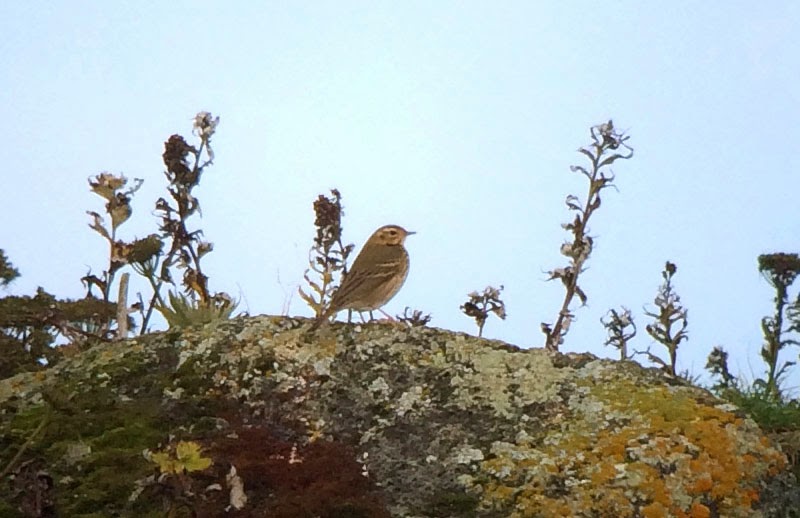 Olive-backed Pipit!
Thankfully landing on the only visible piece of ground!

While shorebirds migrate earlier than passerines, and most have already migrated by now, there were still plenty on the island to keep us busy. Rock Sandpipers are one of the most common nesters on the island - I remember their cute wing-flapping displays from the spring. This time of year though, they're off the tundra and busy feeding on the beaches, handsomely dressed in their pale winter plumage... 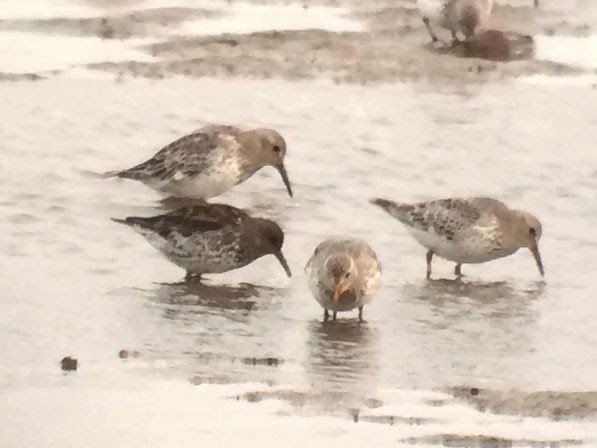 Rock Sandpipers (Pribilof subspecies)
The dark bird at the front left is a mainland bird. 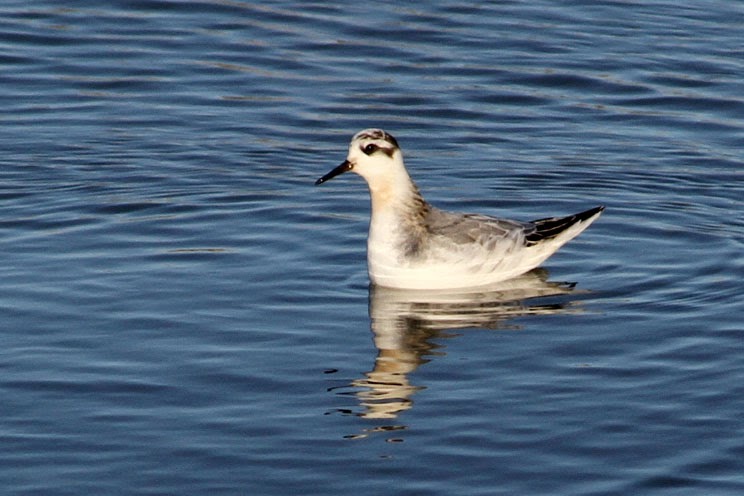 Other common shorebird migrants are the "Pectails" - the similar Pectoral and Sharp-tailed Sandpipers. 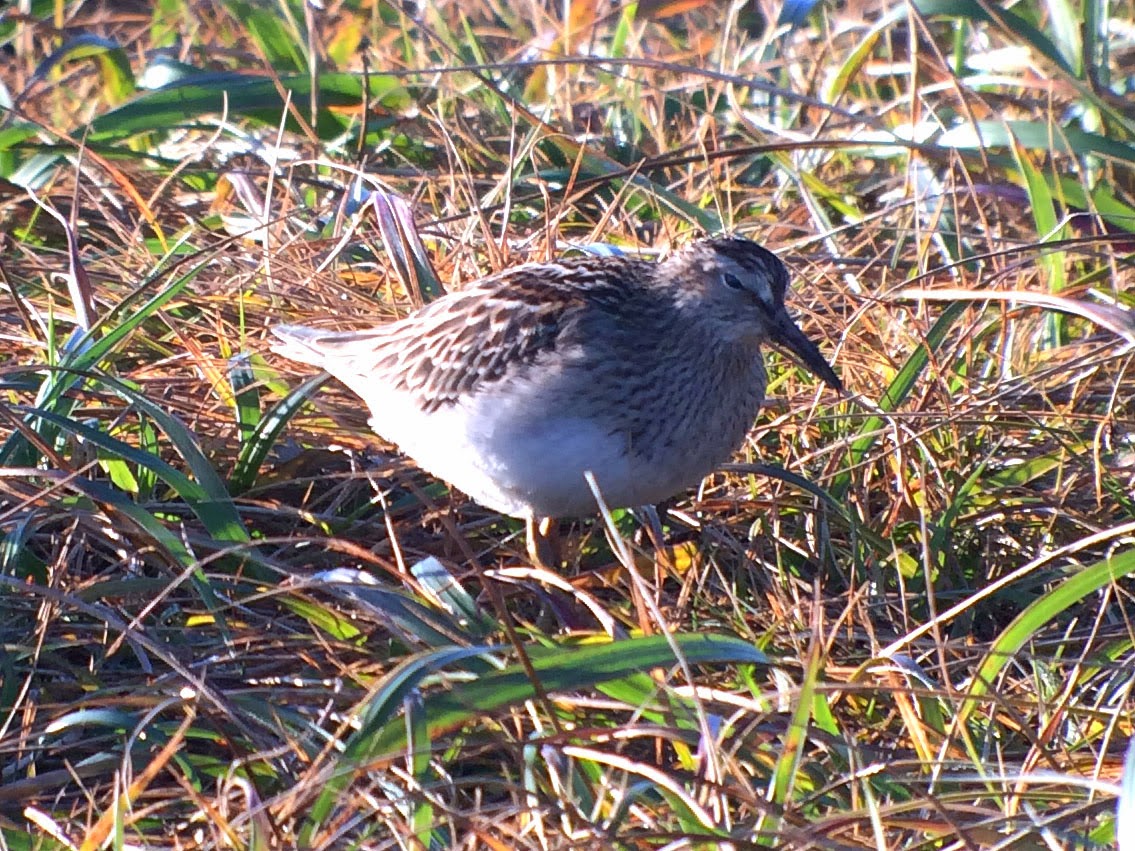 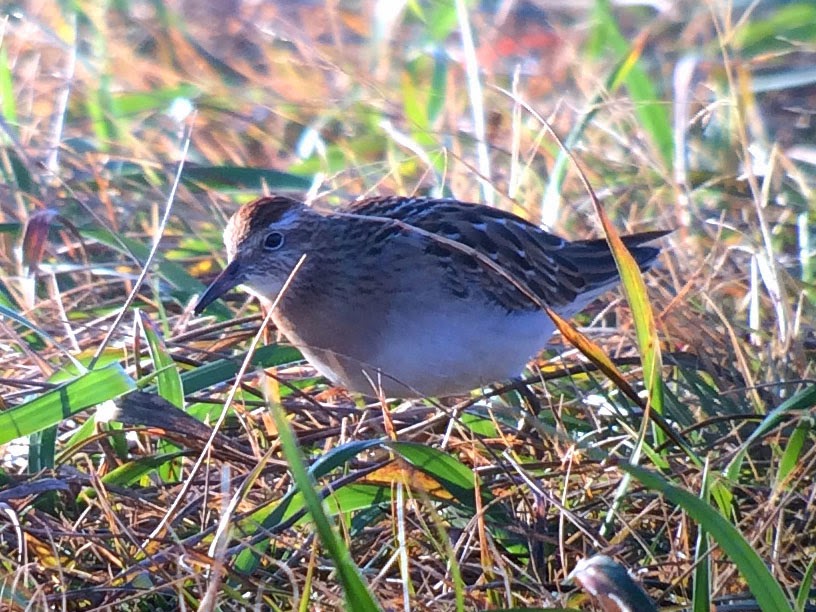 On my shorebird wish-list for the trip was Gray-tailed Tattler - a rare vagrant that's reasonably expected here (they had 2 in the week before I arrived - of course!), and one that I'd missed in Gambell. So I was very excited when Gavin found a Tattler on the 4th day. We jumped out of the bus, spotted the bird, and then heard it give its distinctive call. Distinctive, that is, for Wandering Tattler... 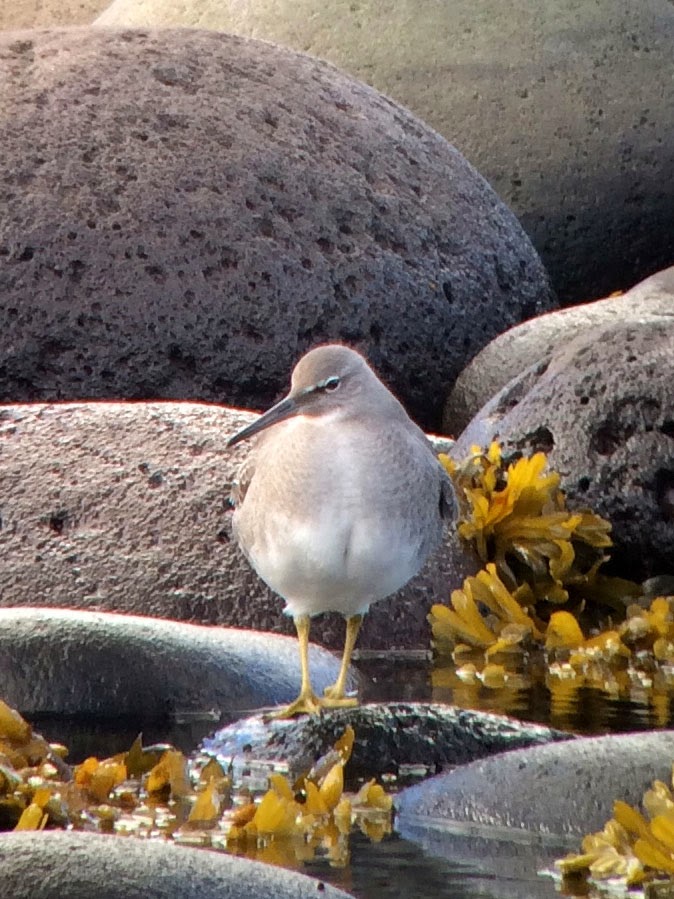 But on the penultimate day, while scanning through a flock of Rock Sandpipers, we got a clear Gray-tailed, and my first new bird for October. 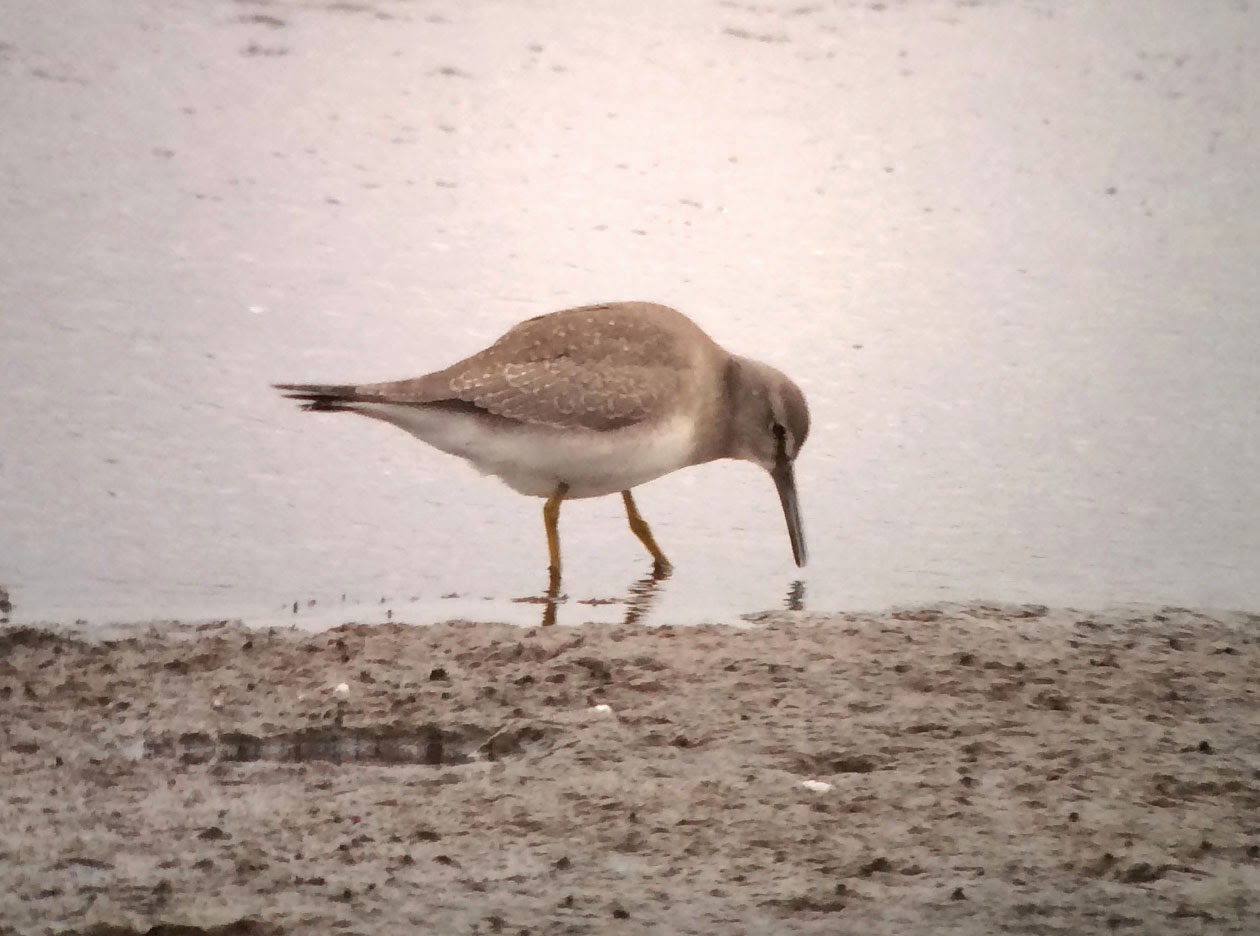 OK. I can tell some of my regular readers are getting bored with this dreary report... 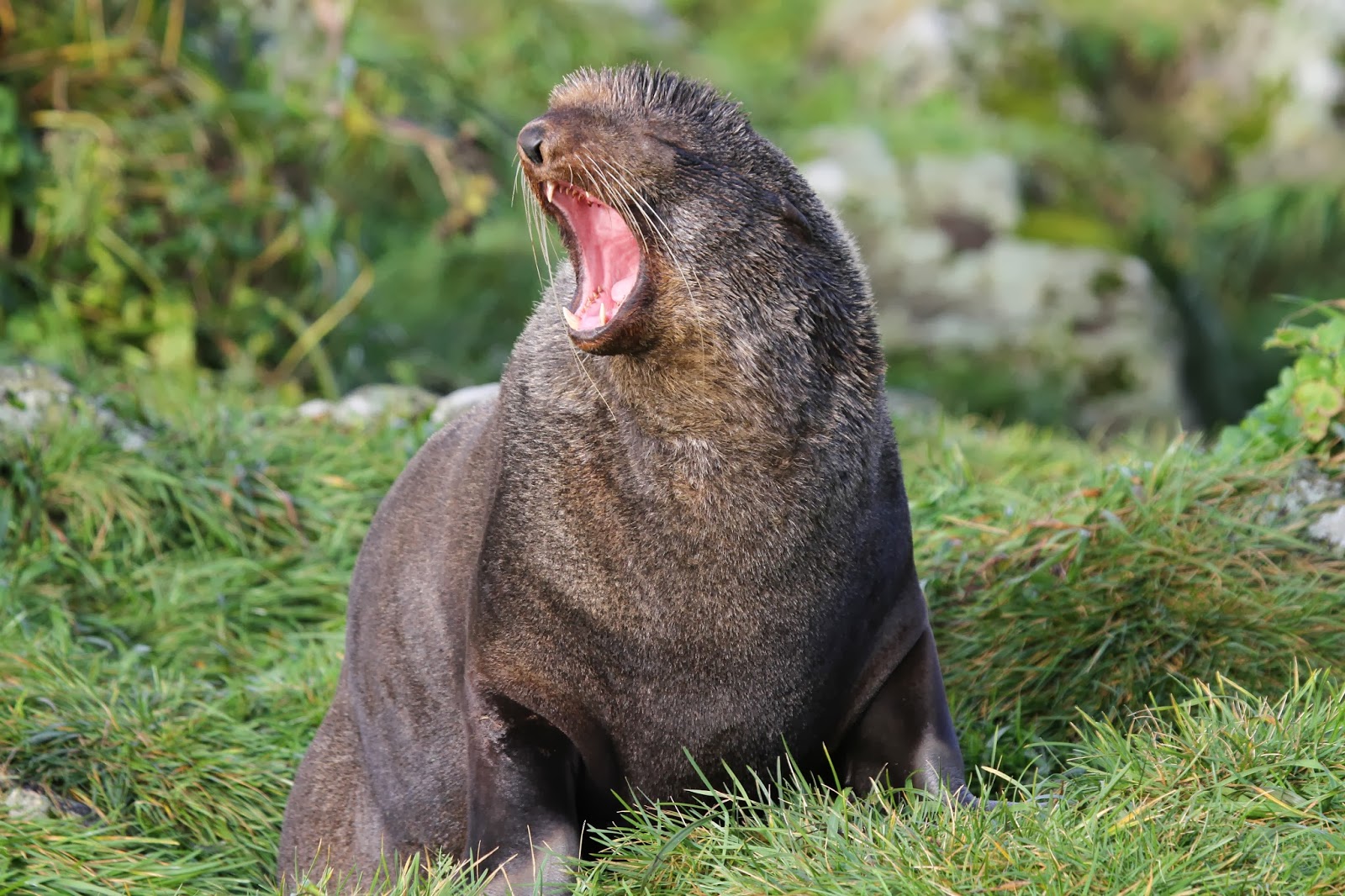 After a lackluster month in Gambell, I'm very happy I decided to come back to St. Paul. I got the two shorebirds I'd missed in Gambell (Common Snipe and Gray-tailed Tattler) as well as three really good rarities (Common Rosefinch, Gray-streaked Flycatcher and Olive-backed Pipit) plus the Stonechat in Anchorage, which I wouldn't have seen if I weren't coming to St. Paul. Of the 9 new birds this month, 5 were on St. Paul. 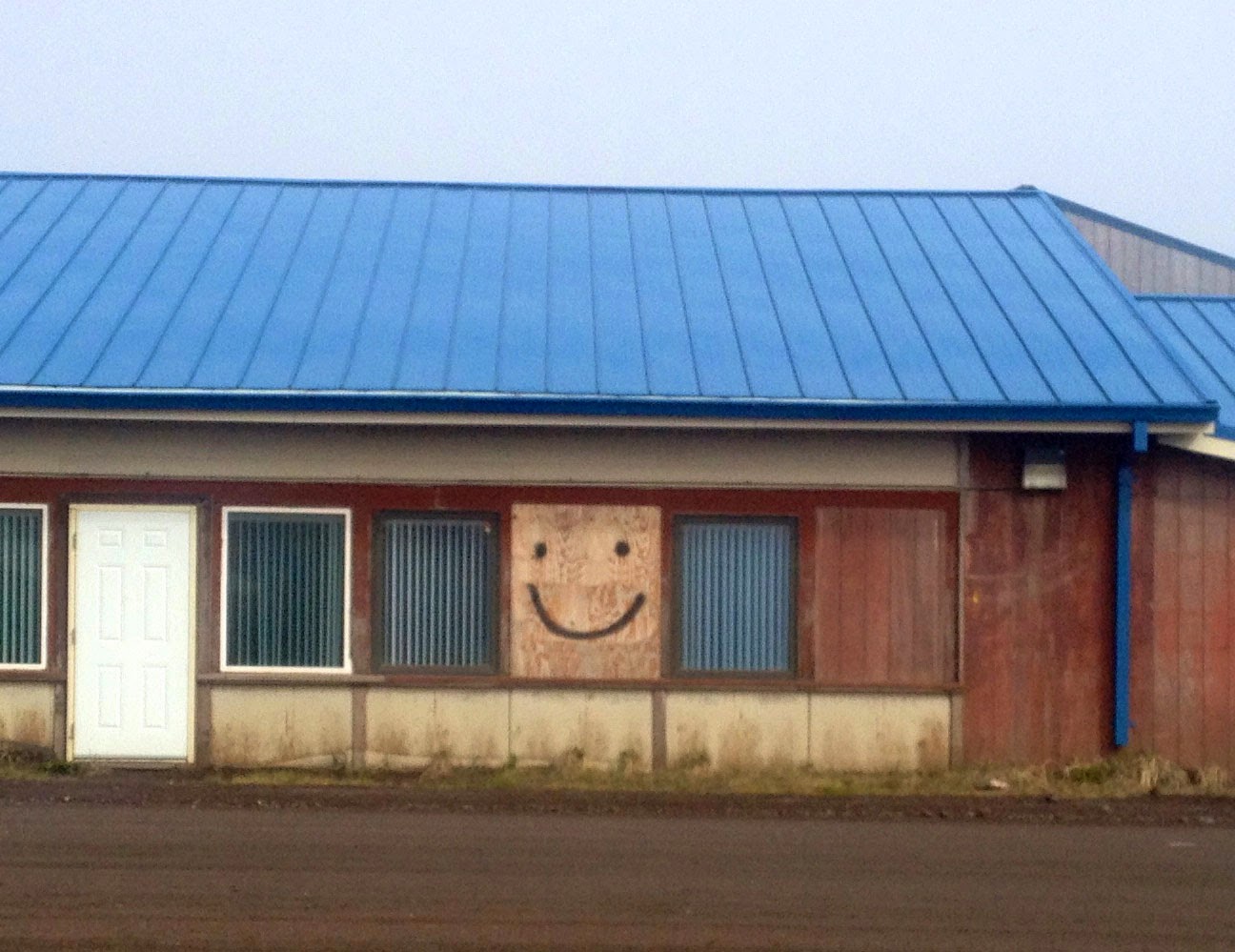 St. Paul. Very happy to be back!