Even this far north there aren't many mid-day departures that look like this... 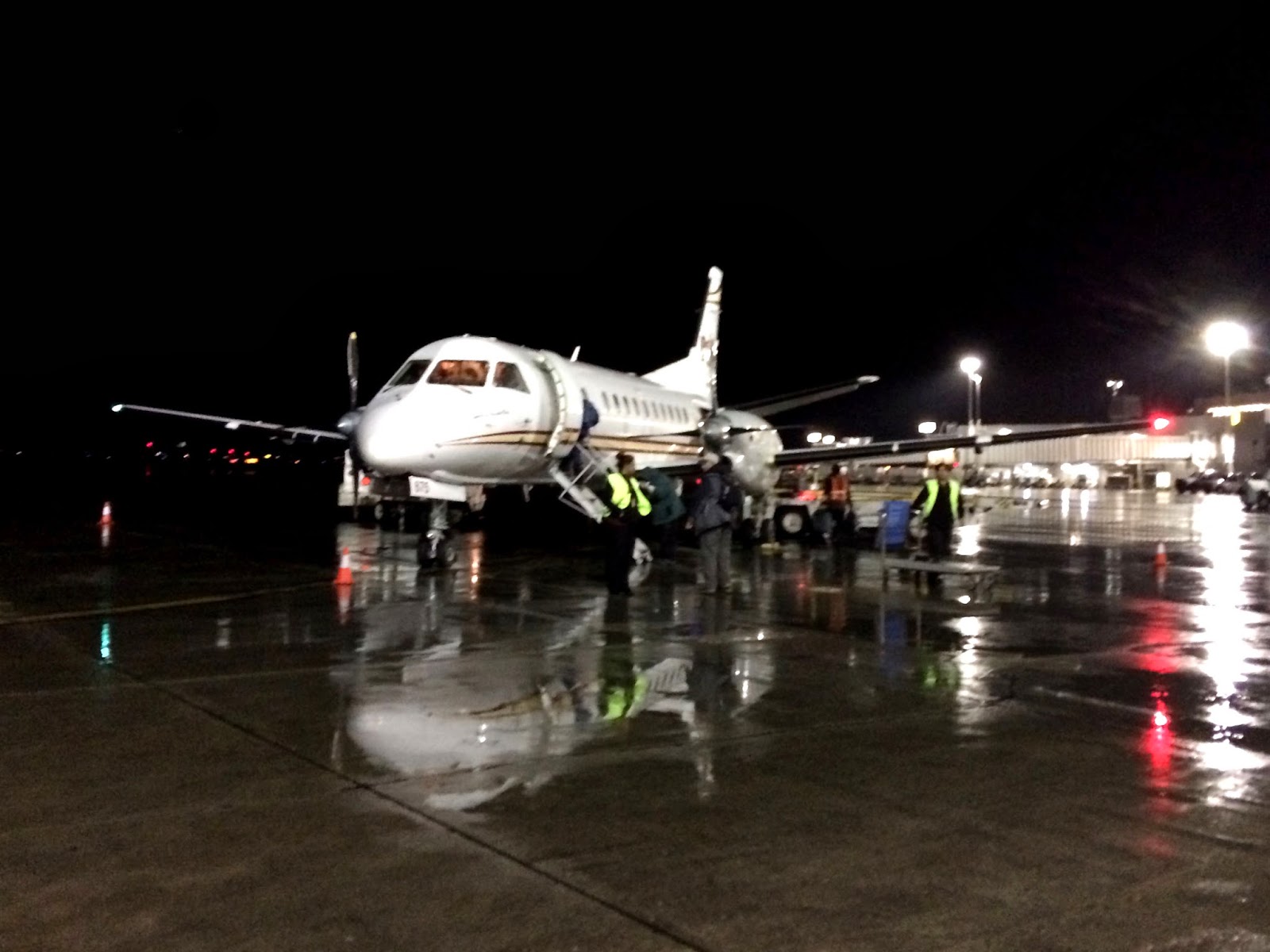 That's because Penair has continued their incredible streak of canceling all my flights to and from St. Paul this year. This time though, the culprit wasn't a volcano. Or even fog. This time, they couldn't find a plane to take us in. And really, that's the crucial part of any flight reservation - having a plane. And more bizarrely, after a cancelled 11:45am scheduled departure, our new flight time was the next day. At 4. *AM*. Yeah. Welcome to Alaska!

So, after a fantastic spring trip here, I couldn't resist coming back to the Pribilofs - those far-flung islands hidden amid the Bering Sea. Since I'm going to be in Barrow in early October, and the Lower 48 has been pretty quiet for rarities this month, I thought I'd return to St. Paul for a week, hoping for an Asian vagrant. Or five. I was also excited to meet up with Chris Hitt, who's birding on the island for a couple of weeks. Chris did a Lower 48 Big Year in 2010, and saw a record 704 species. He was here with friend and fellow Big Year birder, Dan Sanders... 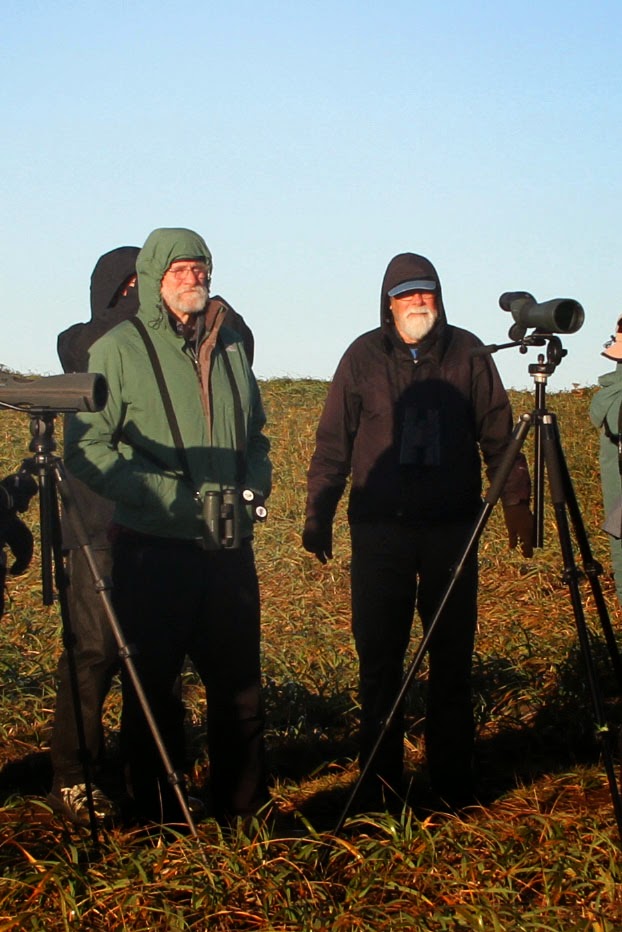 Also on the island were two veteran birders... 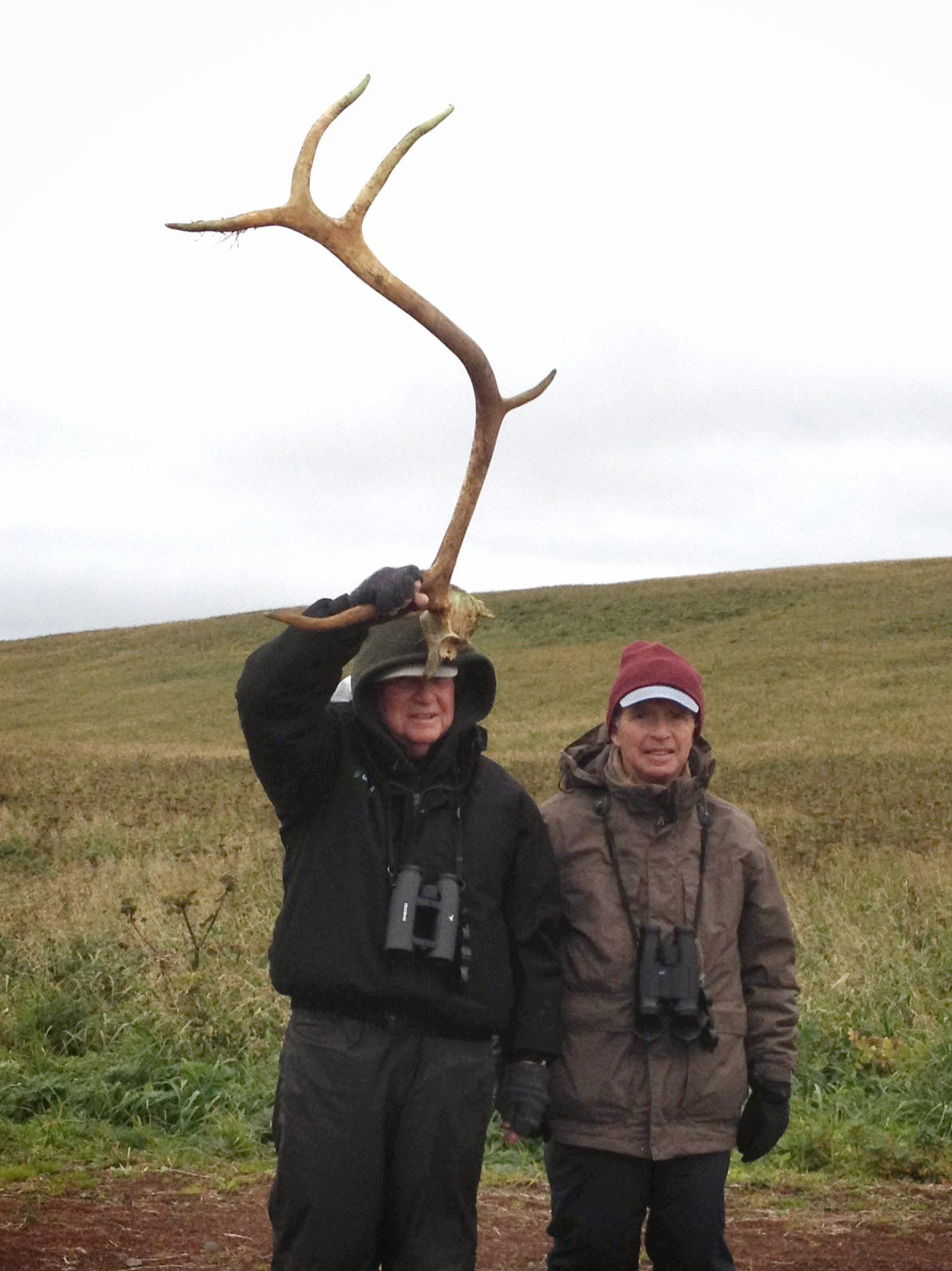 The 800 Club
Paul Sykes (883) and Larry Peavler (882)
(Paul finds birds by scaring the hell out of them with his impressive horn.)

The island looks a lot different compared to spring! The snow and ice is gone, replaced by aquamarine lakes, blue skies and knee-high green vegetation. 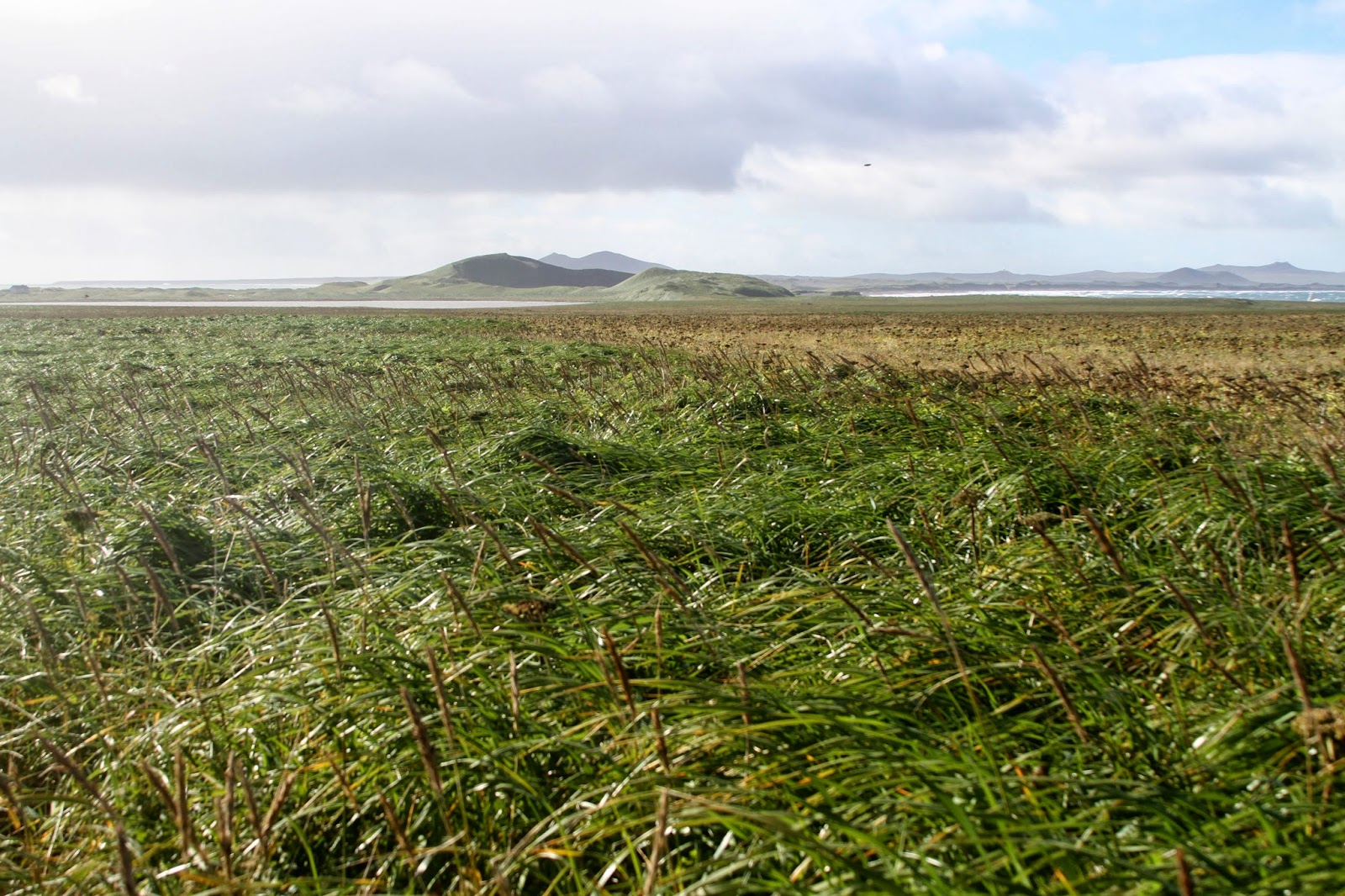 A typical birding day starts before sunrise when one of the guides picks us up in the tour bus. 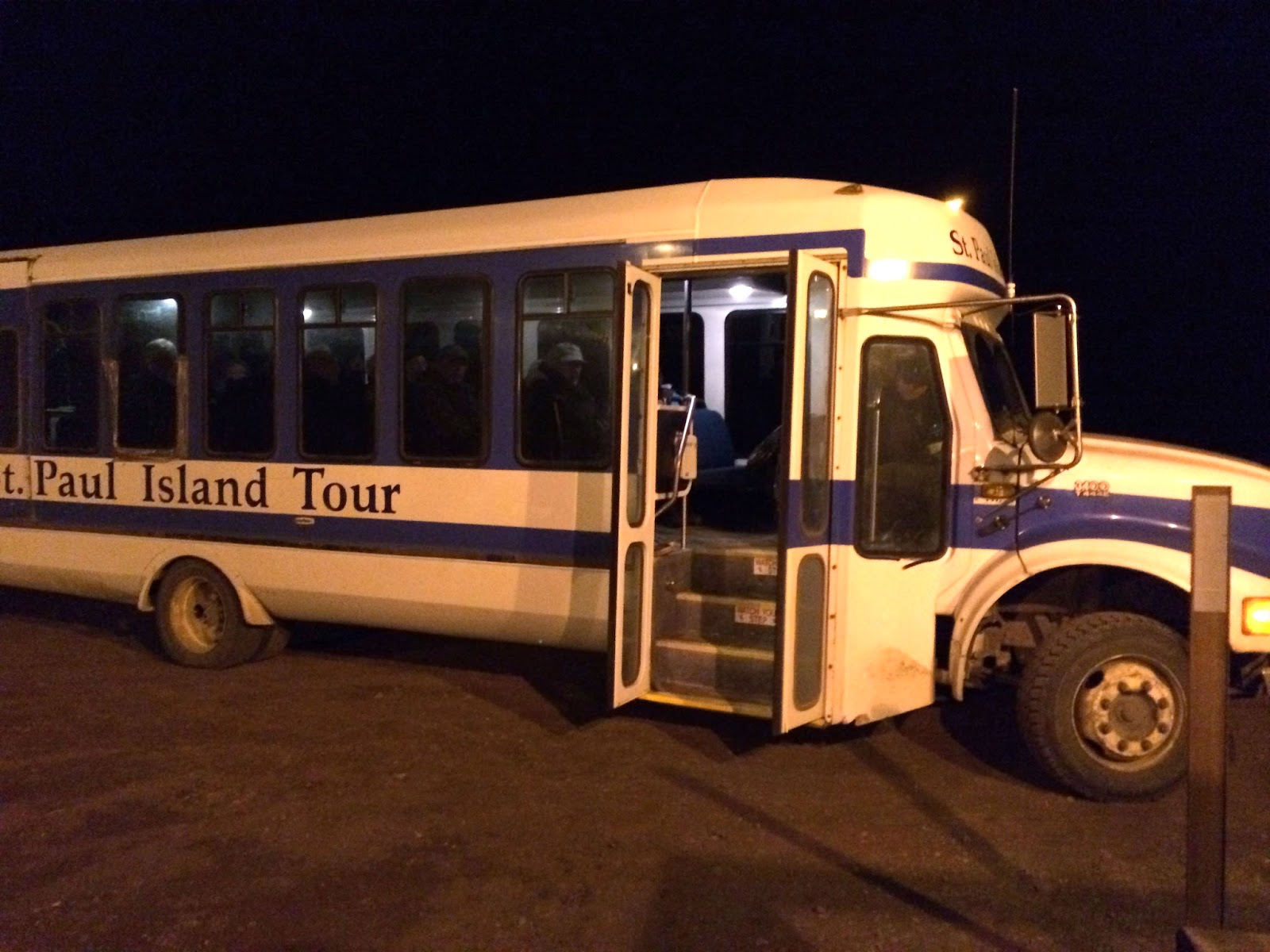 This bus is full of birders eagerly waiting for me.
(Note to self: must get out of bed more than 10 mins before departure time)

First stop is breakfast. It's hard to choose where to go, as there are so many options for eating out in St. Paul. However, nothing can compete with the eggs at the Trident Fish Cannery. So, that's where we go... 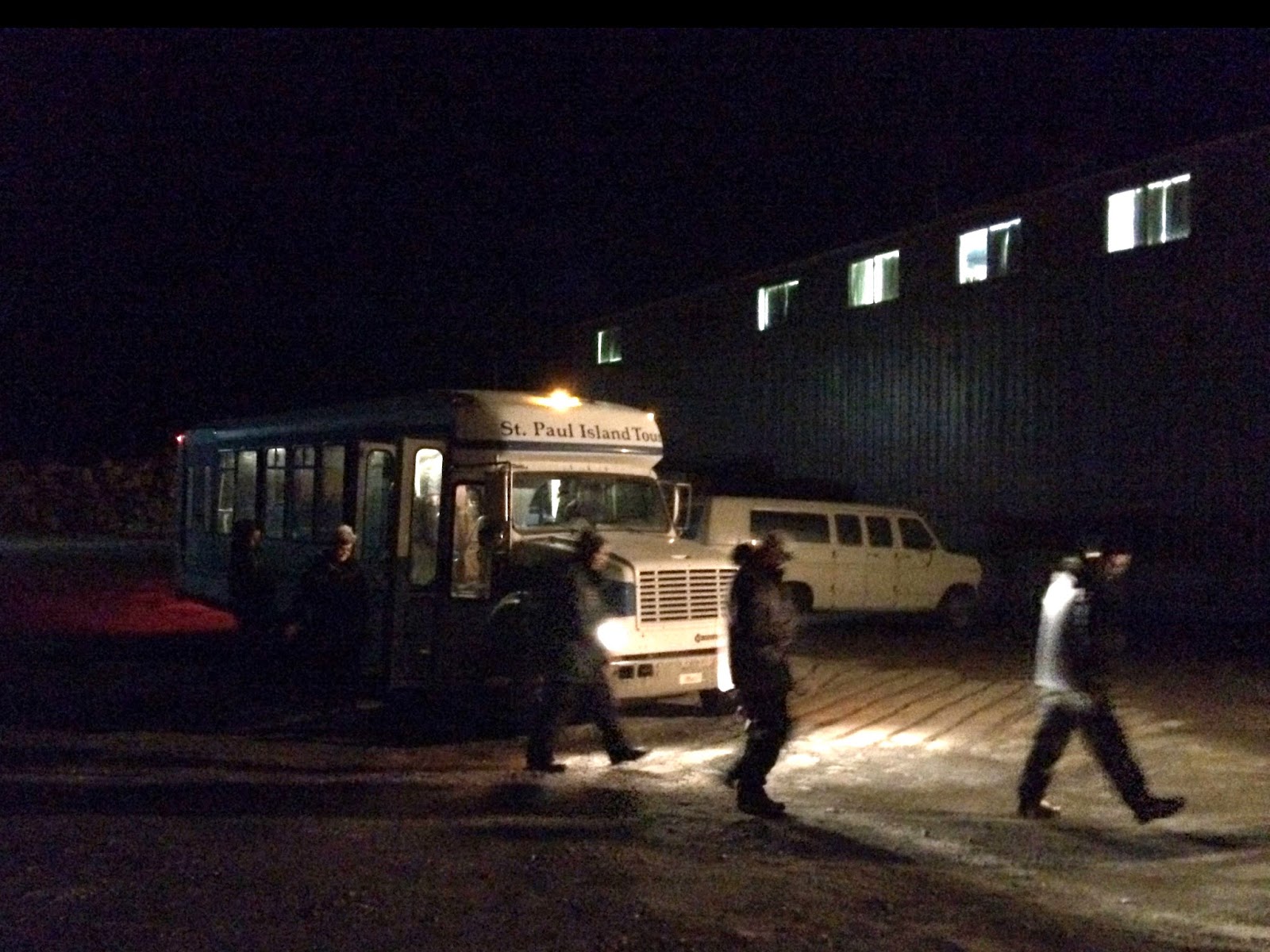 We rush off the bus, hoping to be first in line... 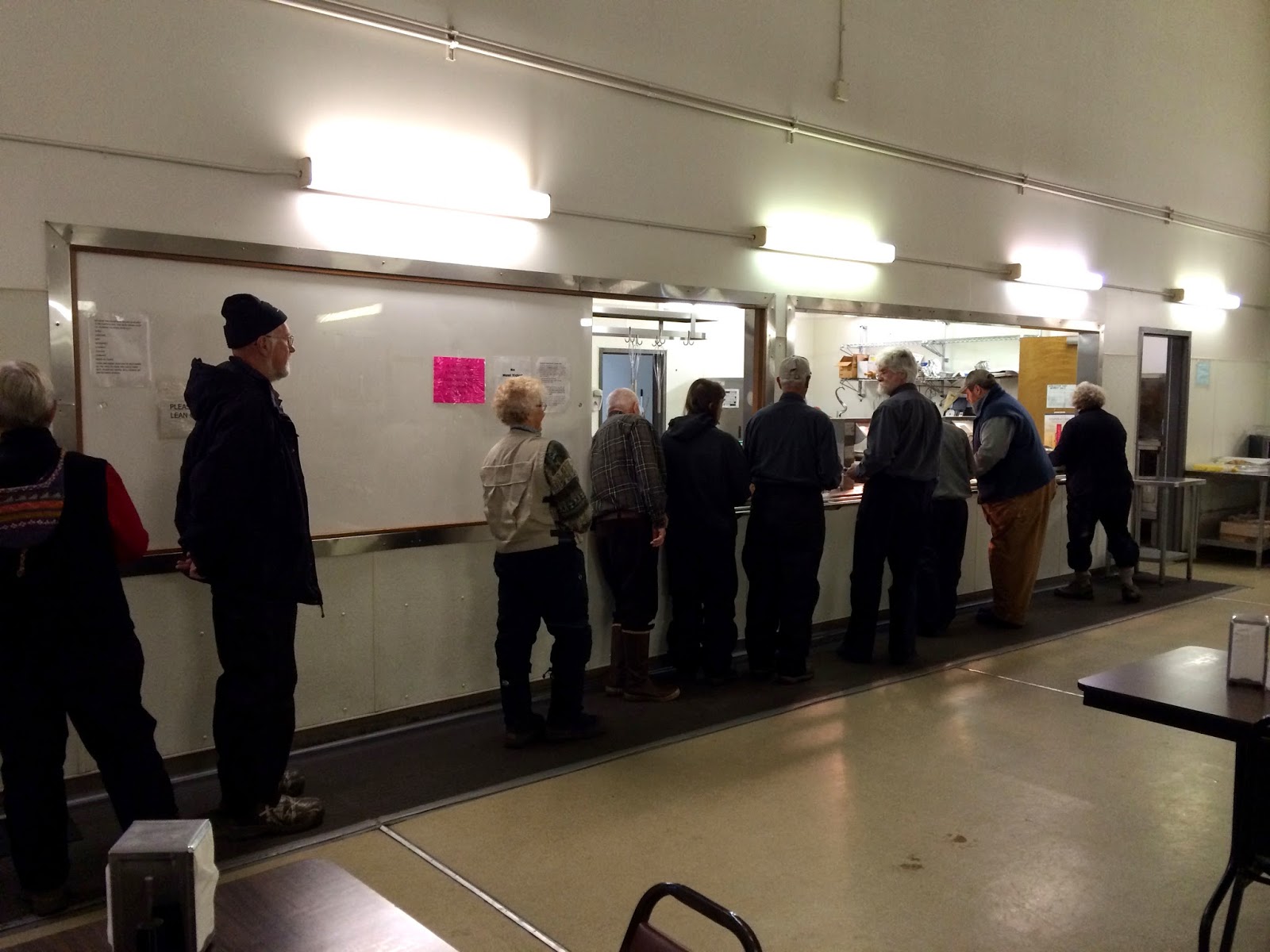 What? No eggs benedict today?

After waiting for the sun to finally rise (we're so far west in the Alaska time zone that sunrise is well after 9am), we drive out to bird the island. Sometimes this could be done from the bus... 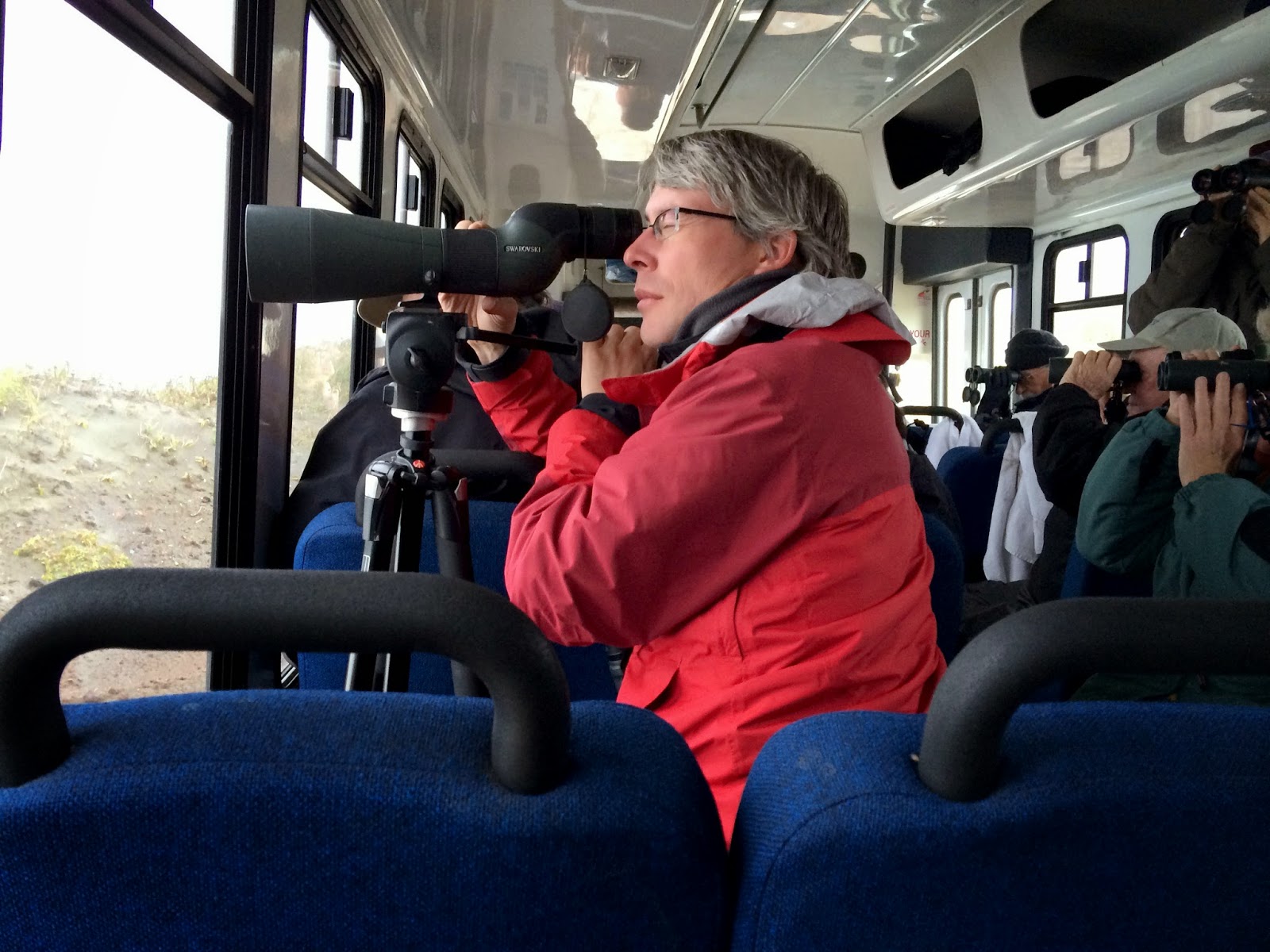 But invariably we'd have to actually get out of the bus. We'd then do the "Putchkie Putsch" - a cruel and sadistic game invented by the birding guides on the island. Putchkie is the native name for the tall, evil celery plants that suddenly spring up when the snow melts. 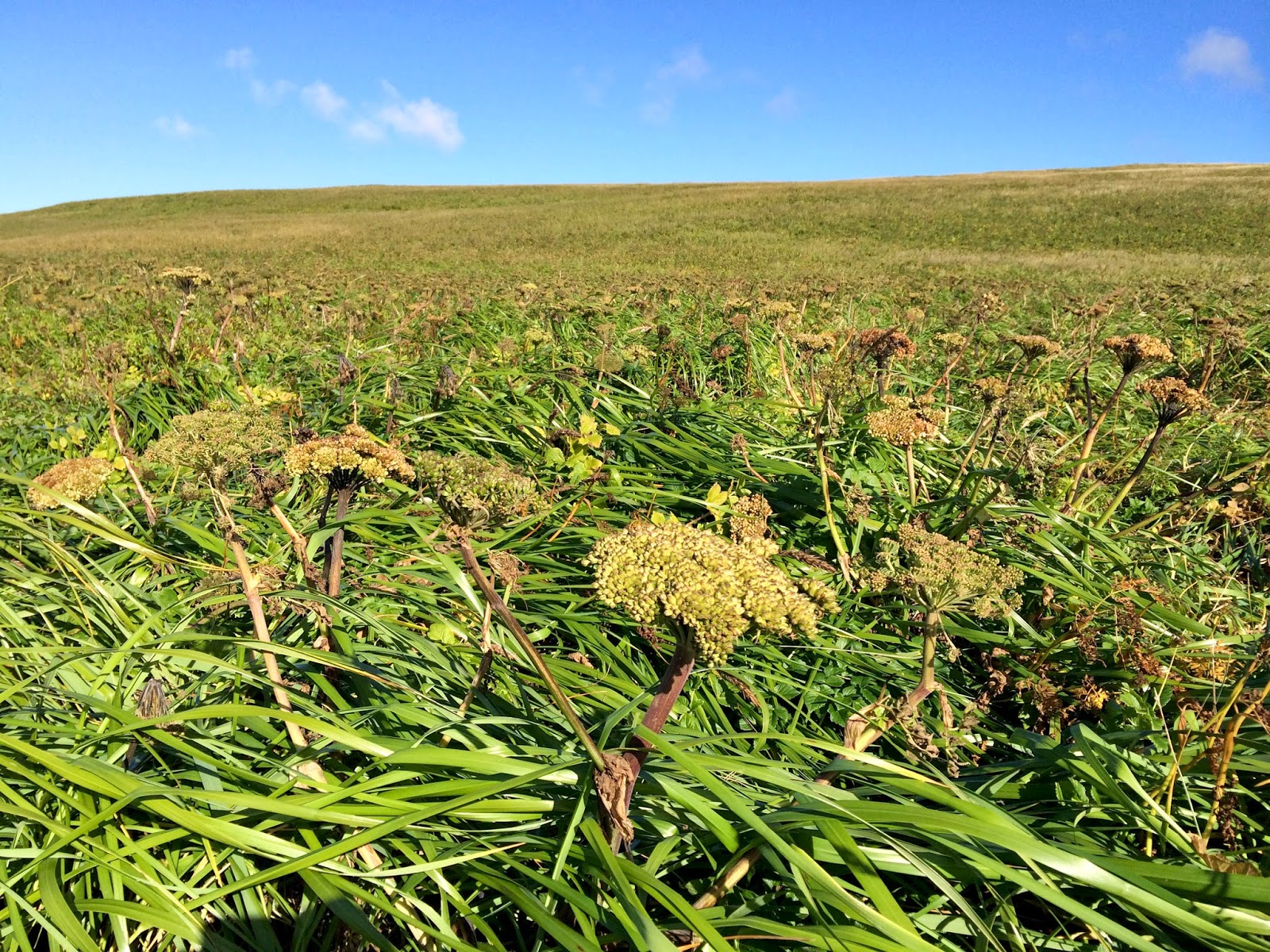 Putchkie - the local celery.
It looks harmless but will easily break a leg if you get tangled up in it.
(And then it'll reach down and strangle you to death. Probably.)

In this game, the guides convince naive birders that there are actually birds hidden in these vast and lonely patches (there aren't.) The game starts with one side lining up in formation at one end of the field... 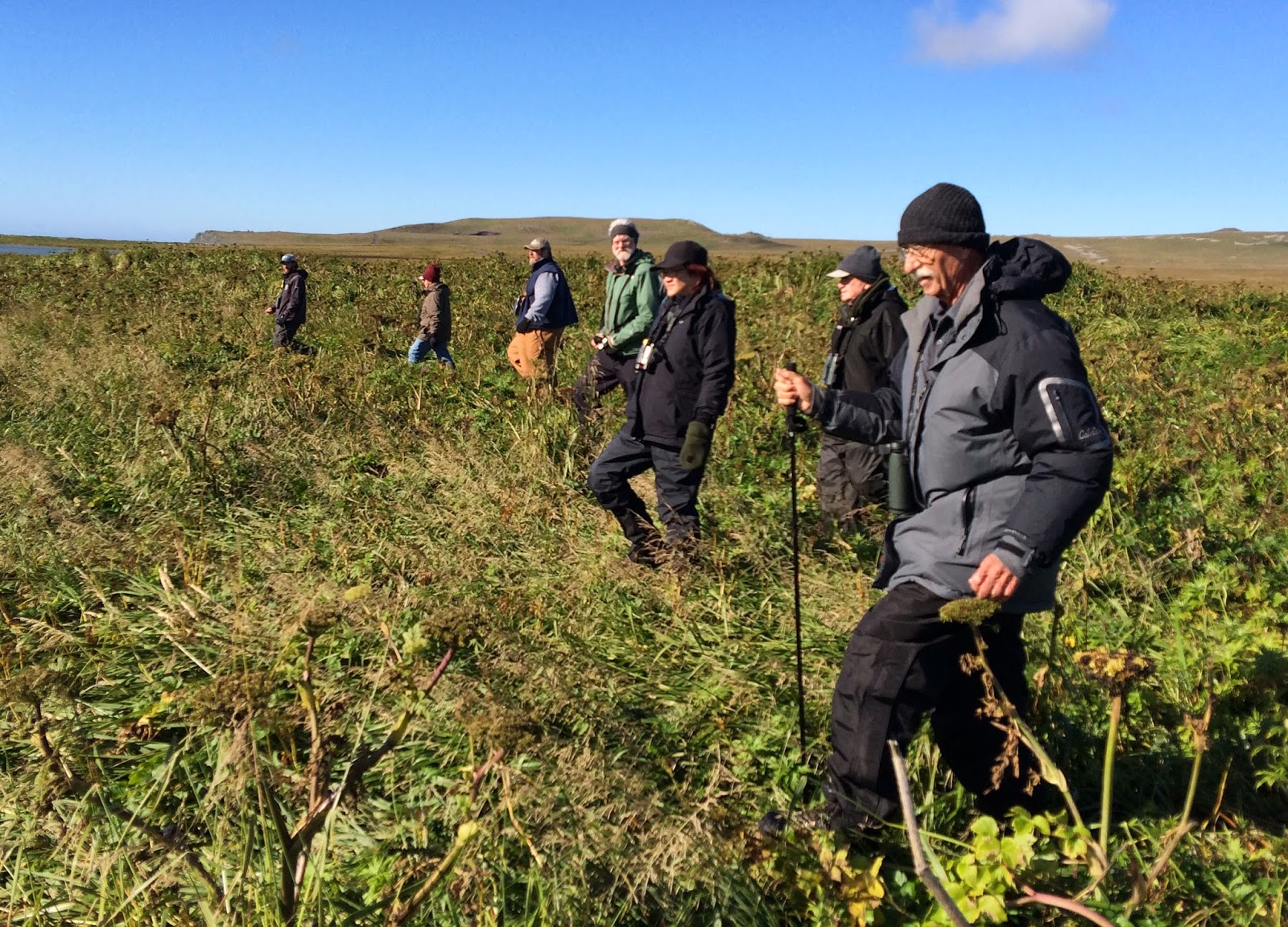 And then Go! Players start walking through the leg-tripping grass, and back-breaking hummocks. Soon, there'd only be a few left standing... 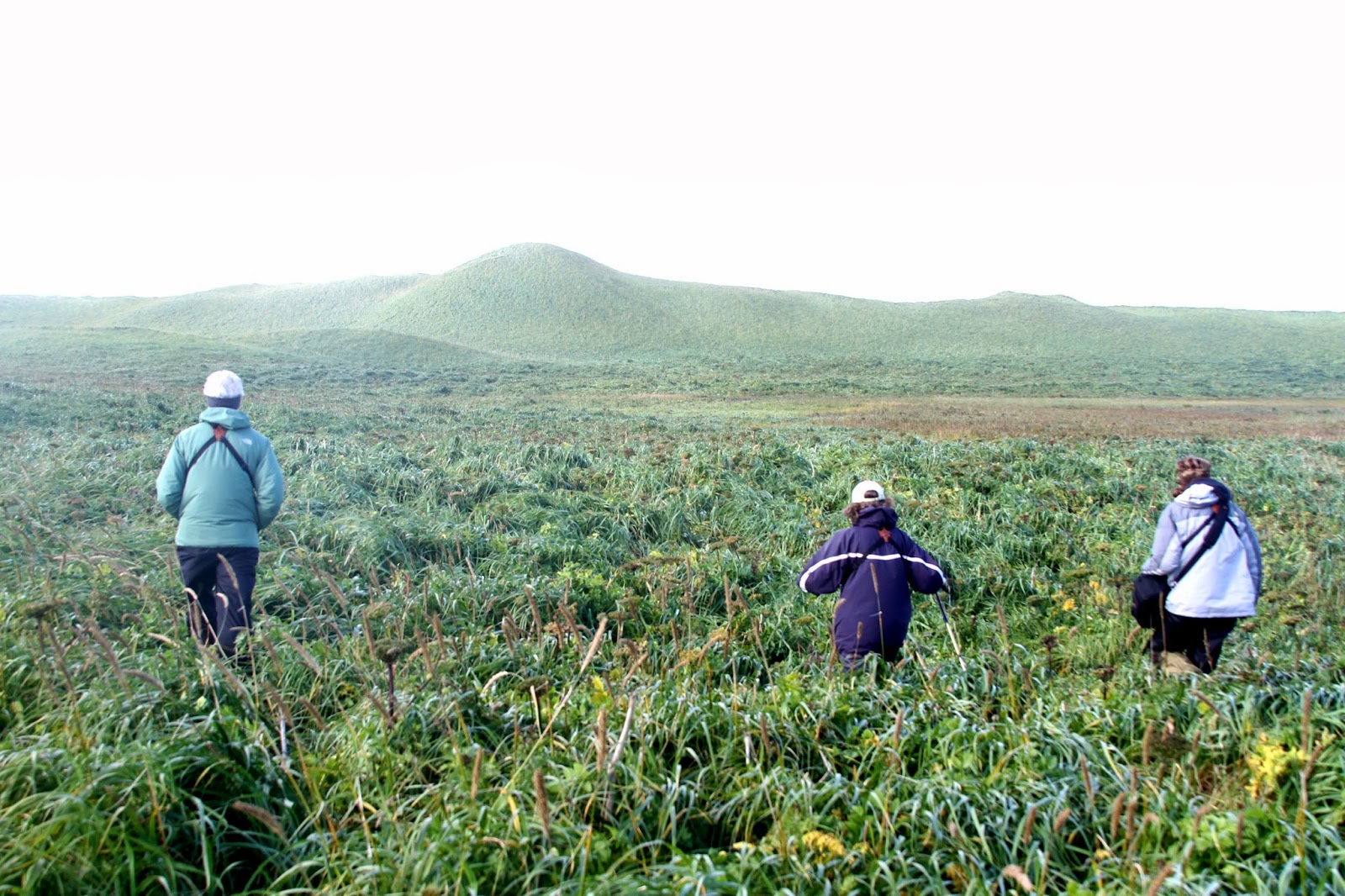 The game would end when no birds were found and with players limping back to the bus. 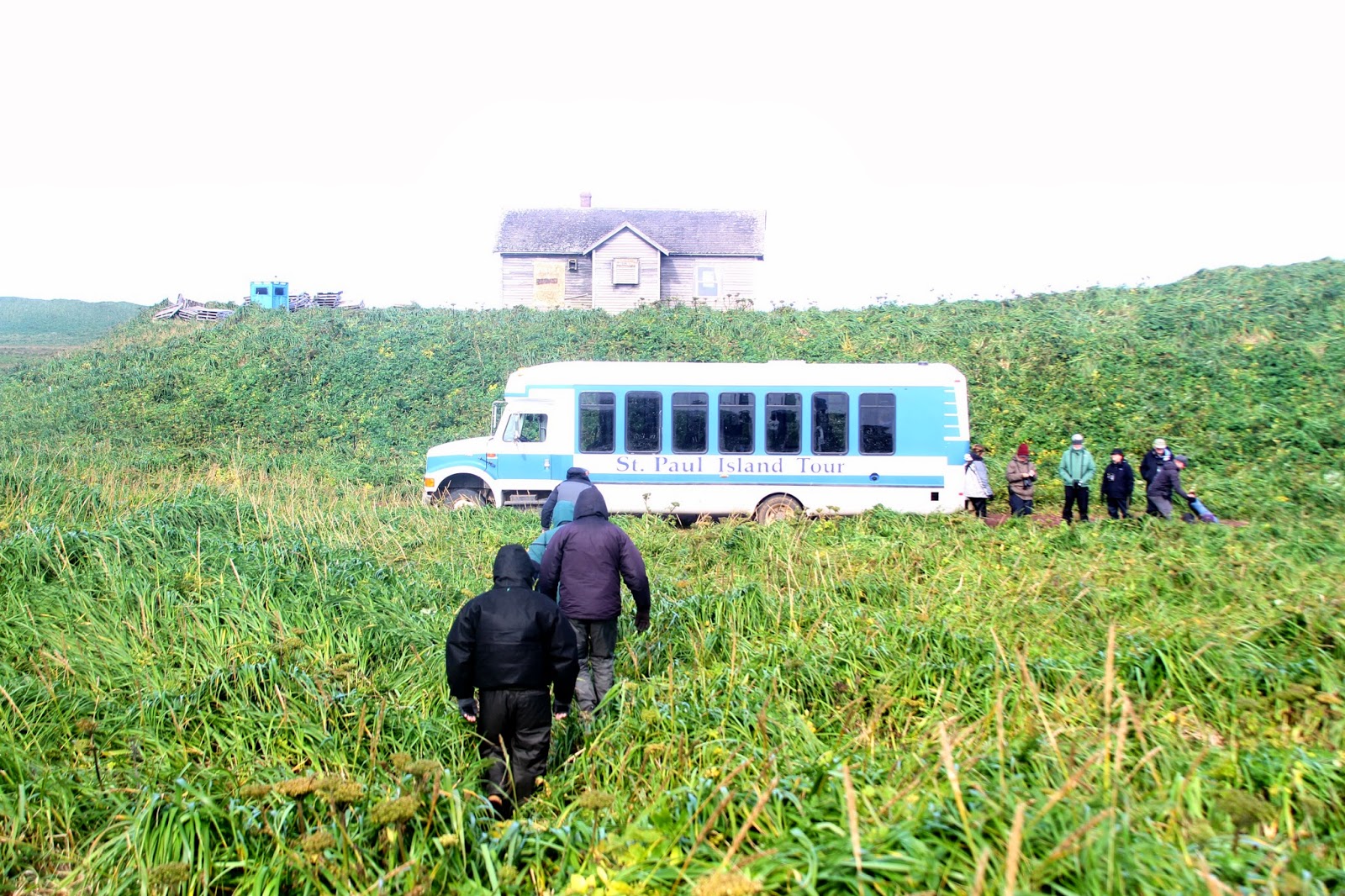 I'm kind of surprised they still play this game here. Last week, one of the players didn't do so well... 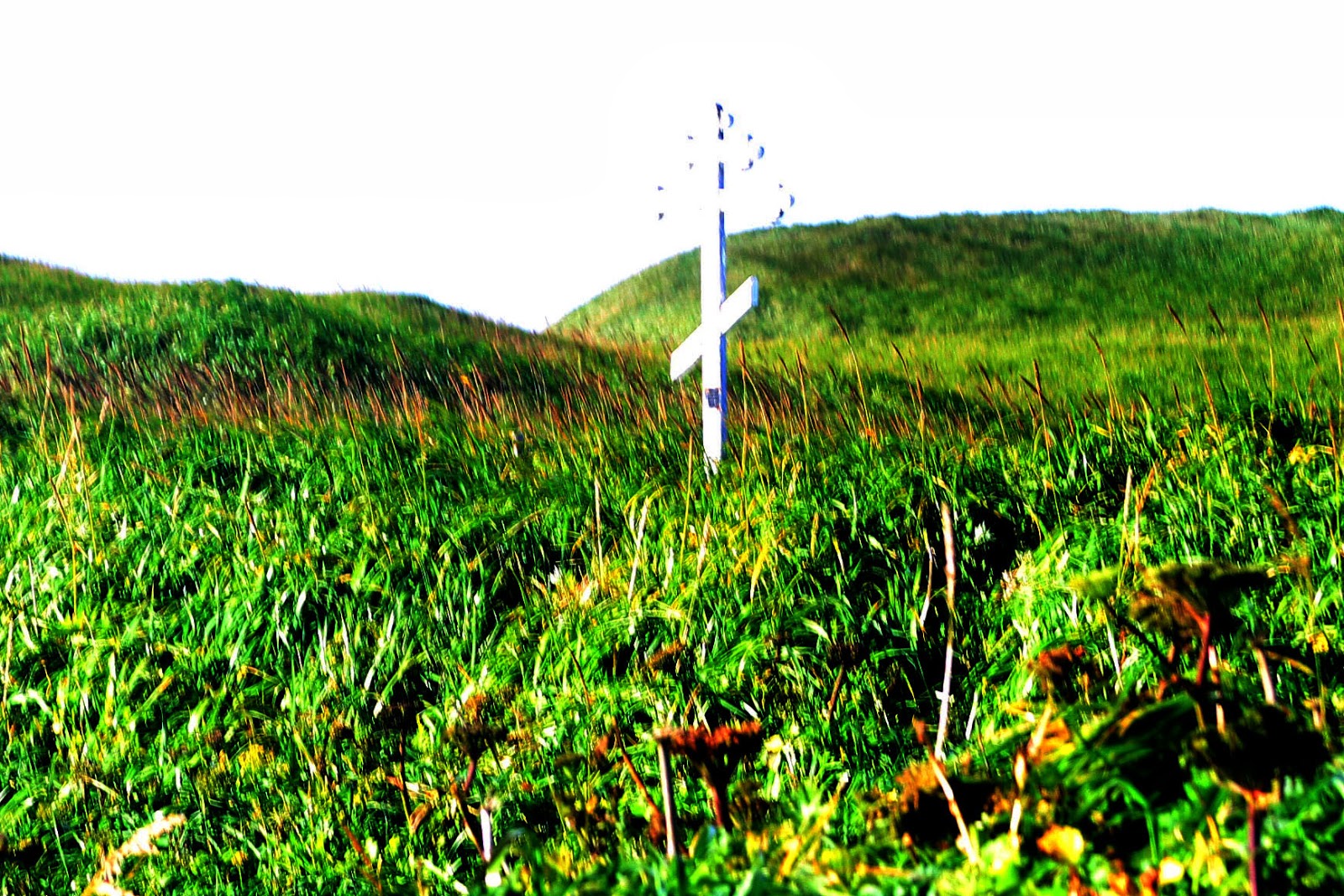 This player broke one of the cardinal rules of the game - they found a bird.
(Replay showed the bird to be a Middendorff's Grasshopper Warbler)

By mid-day we'd all be exhausted from the Putchkie. We'd consult Yelp for a lunch place. Often, we'd head to a local hole in the wall place, some well-kept secret - 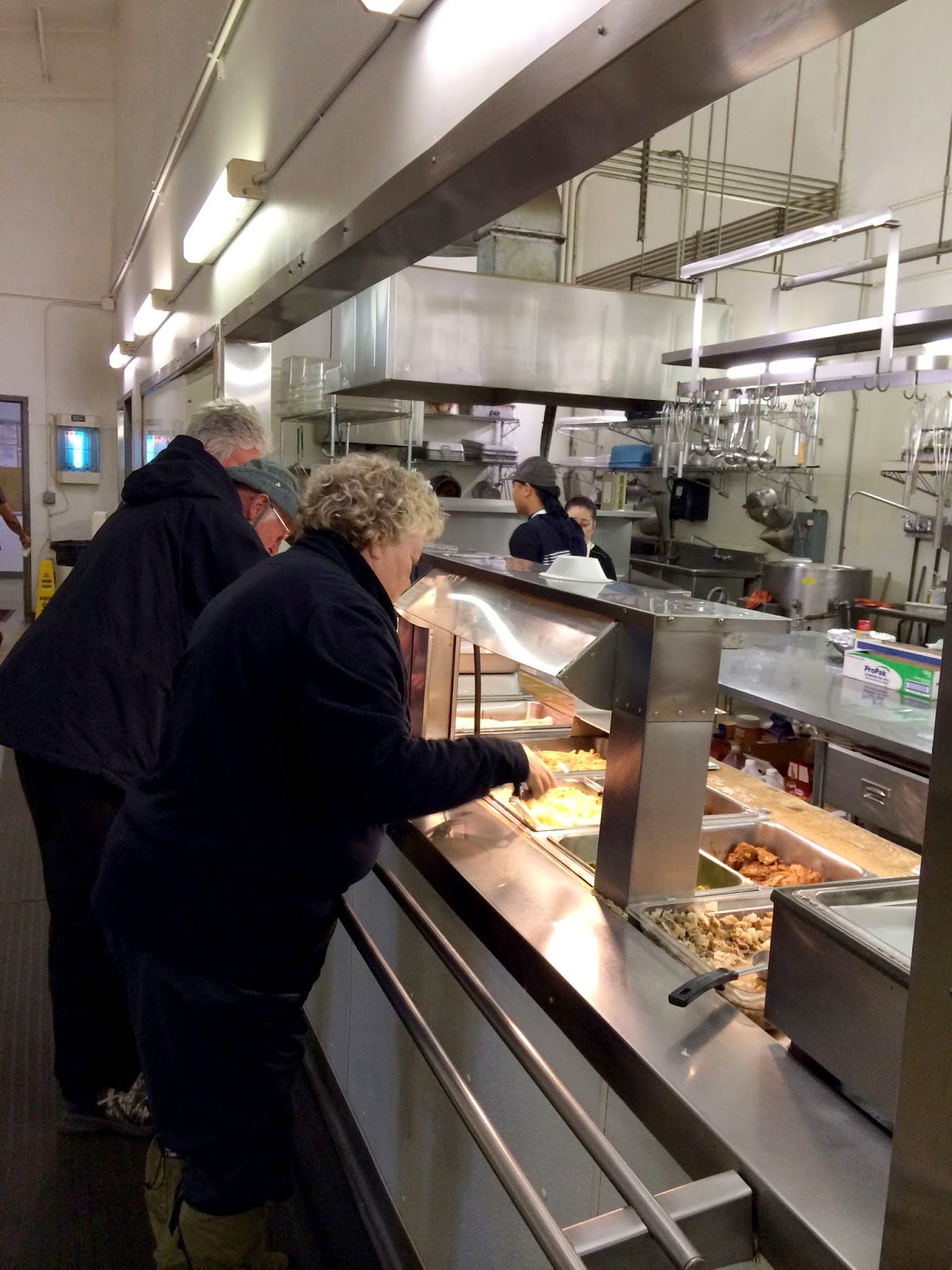 The Trident Fish Cannery - a great little spot for lunch.

We had excellent guides on the island - Scott Schuette, Doug Gochfeld and Gavin Bieber - who worked hard to find birds. Often in unusual places. 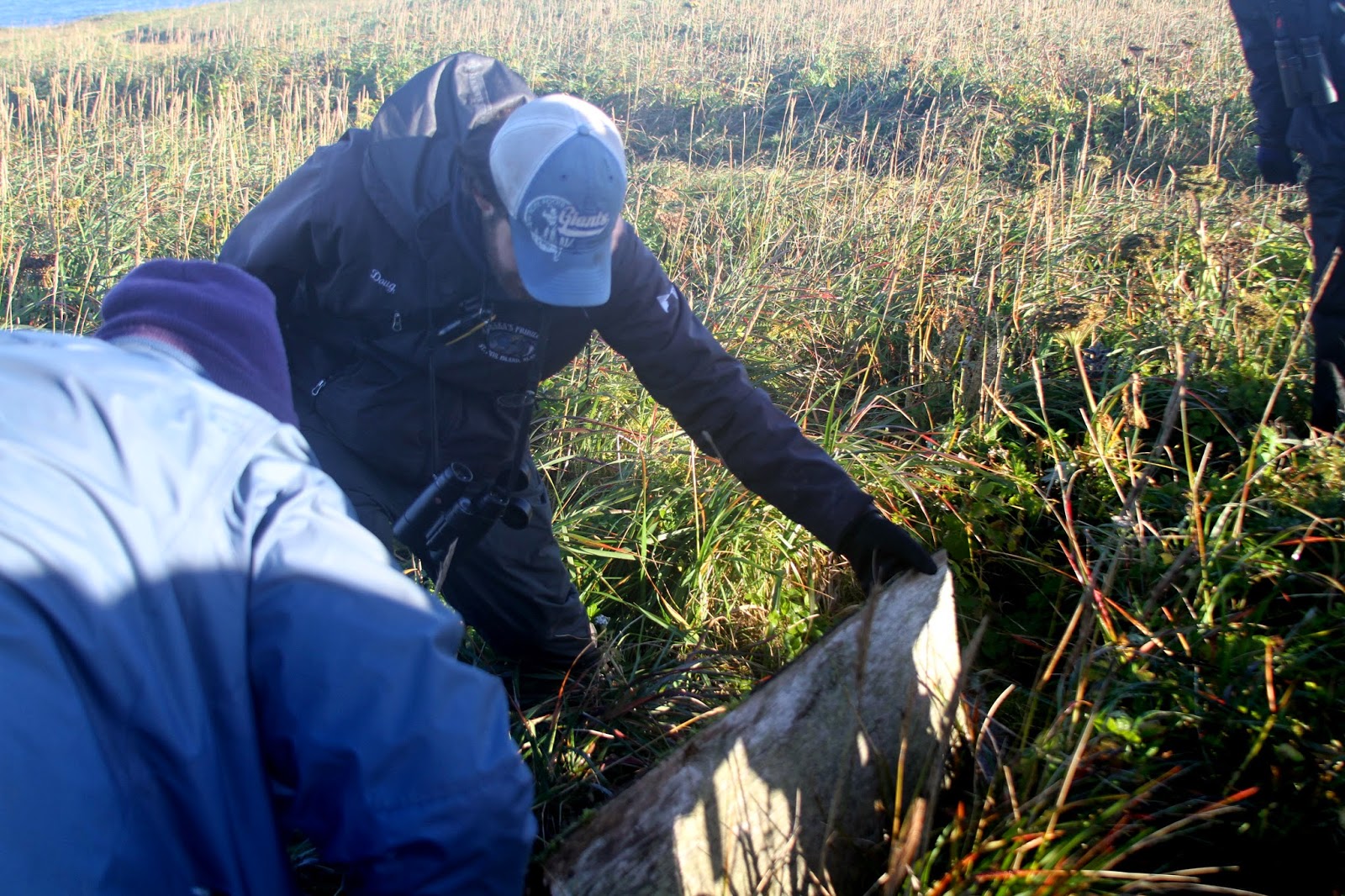 Looking for birds under boards. 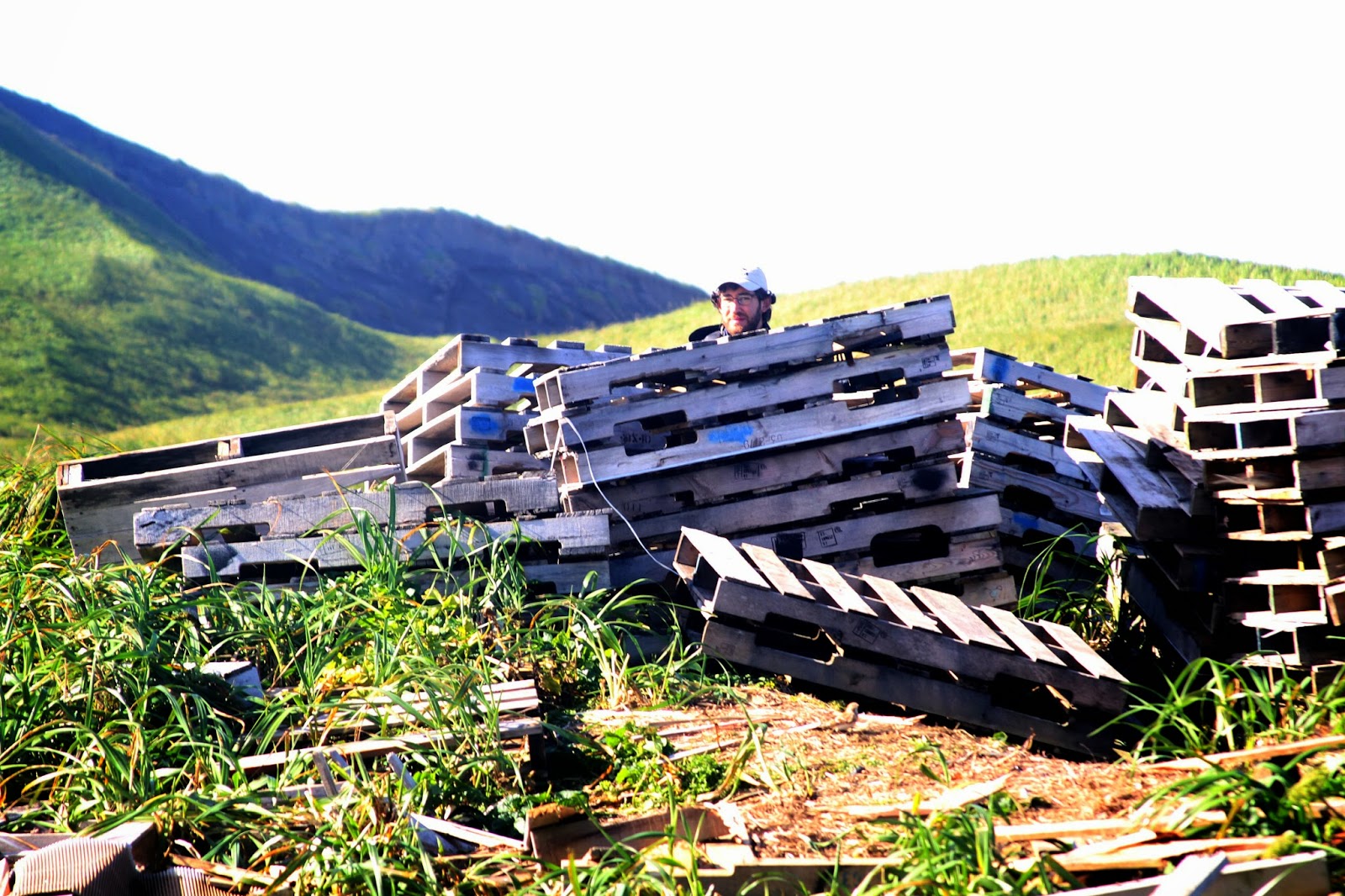 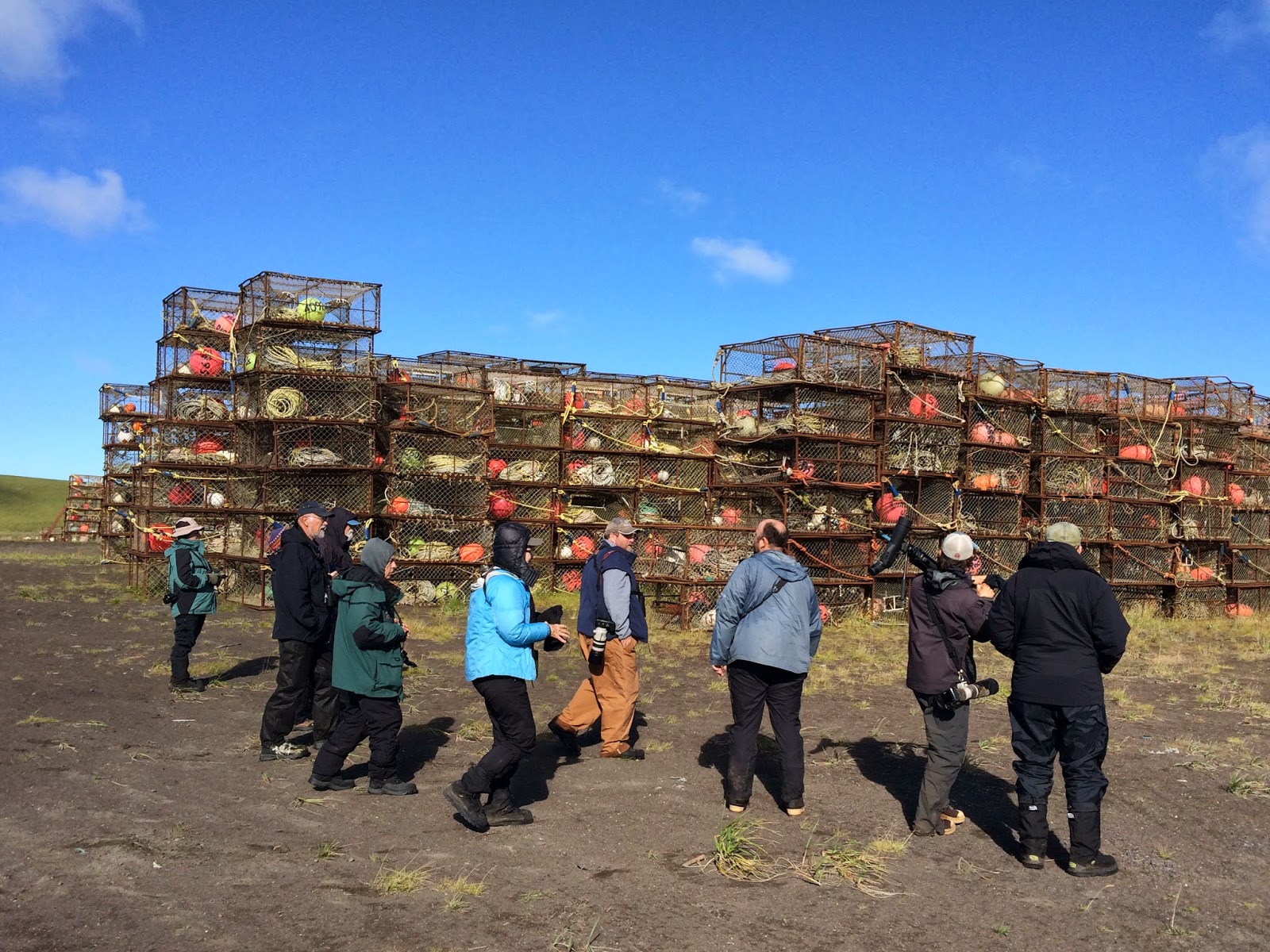 Crab Pots - a great place for birds to hide. 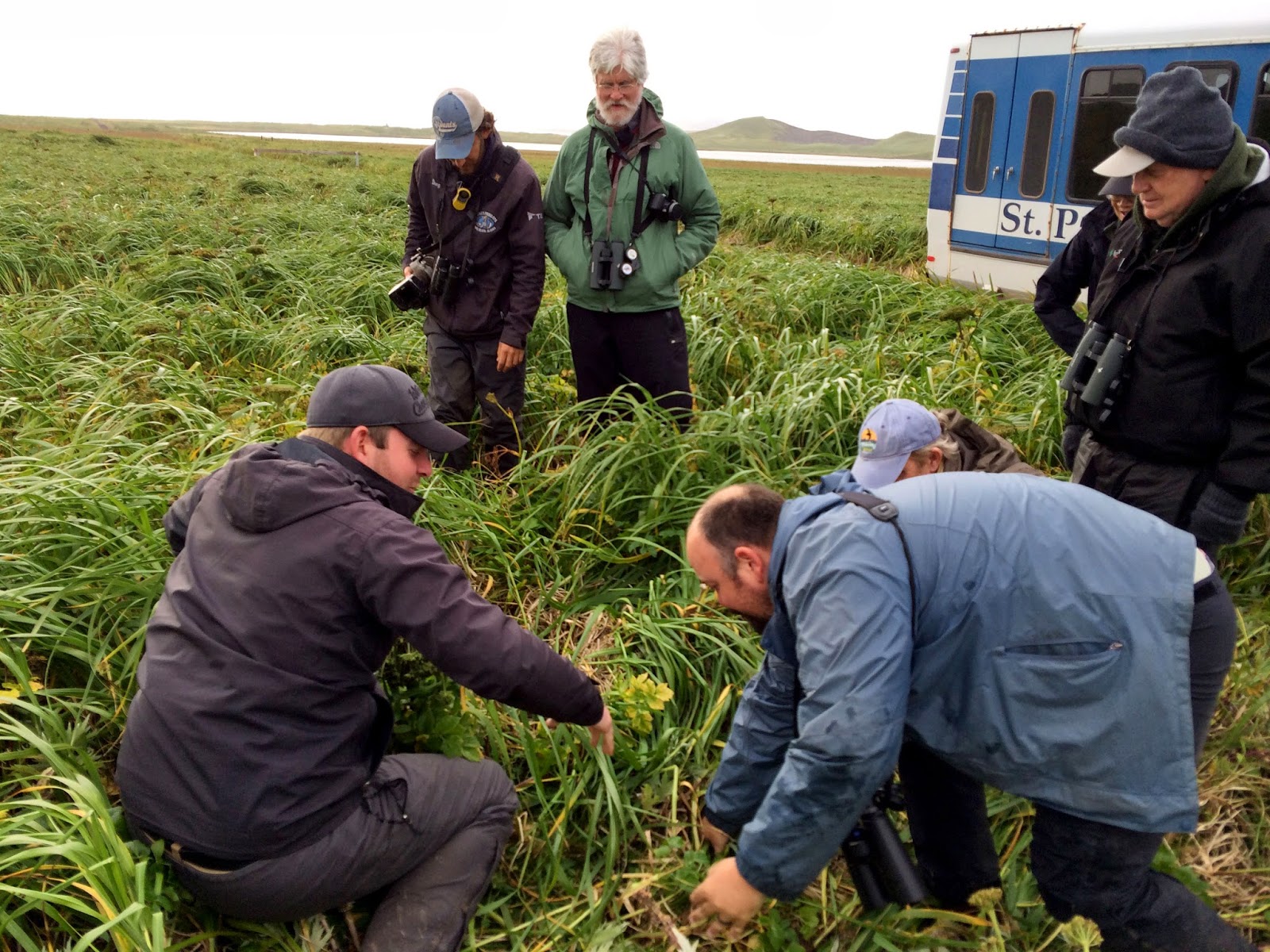 Getting desperate. Catching birds in the grass

At times though, I felt they were just a bit too optimistic with potential birds... 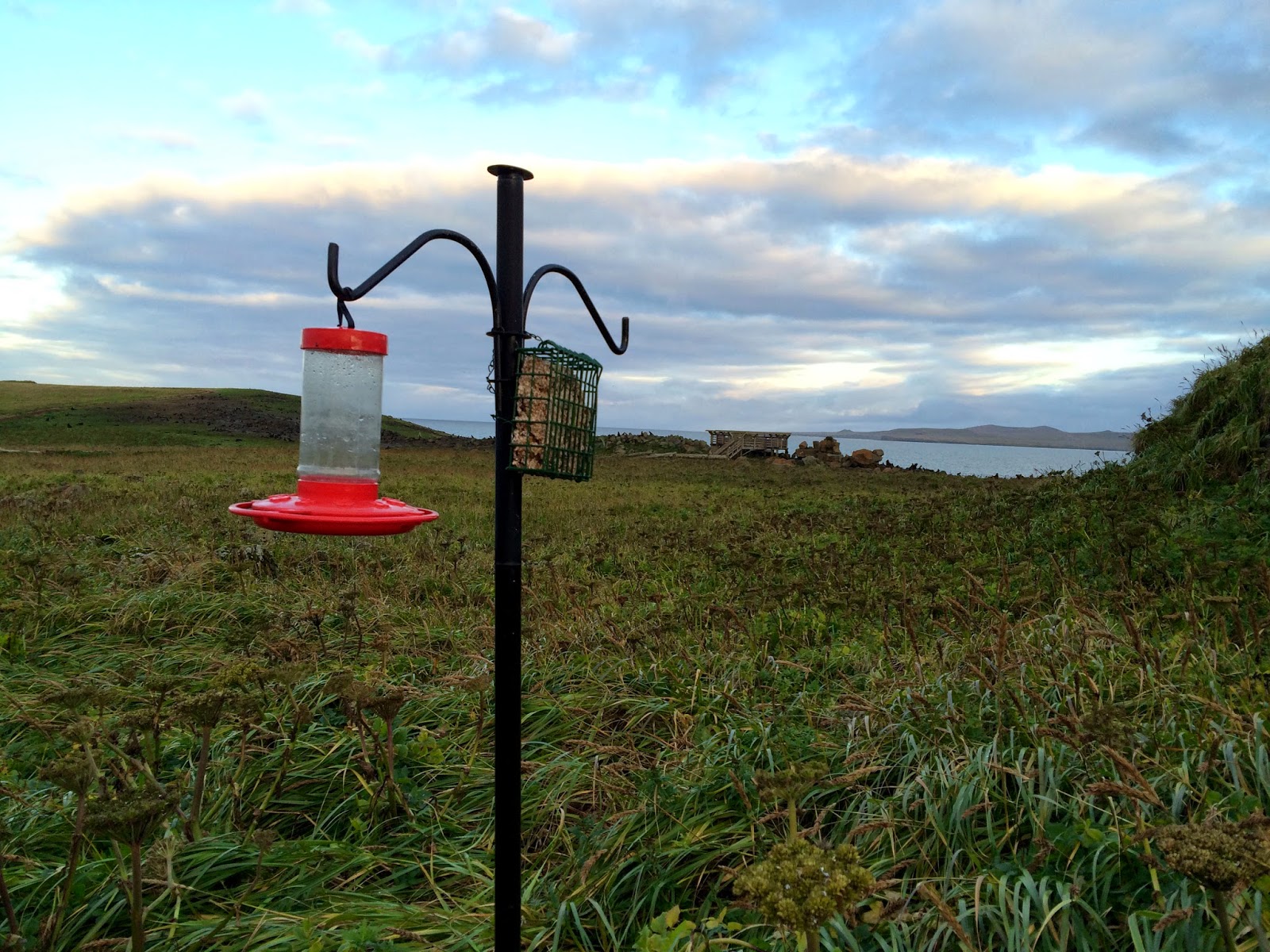 And on really slow days, we'd resort to that old favorite - whacking the ground until we scared up a bird... 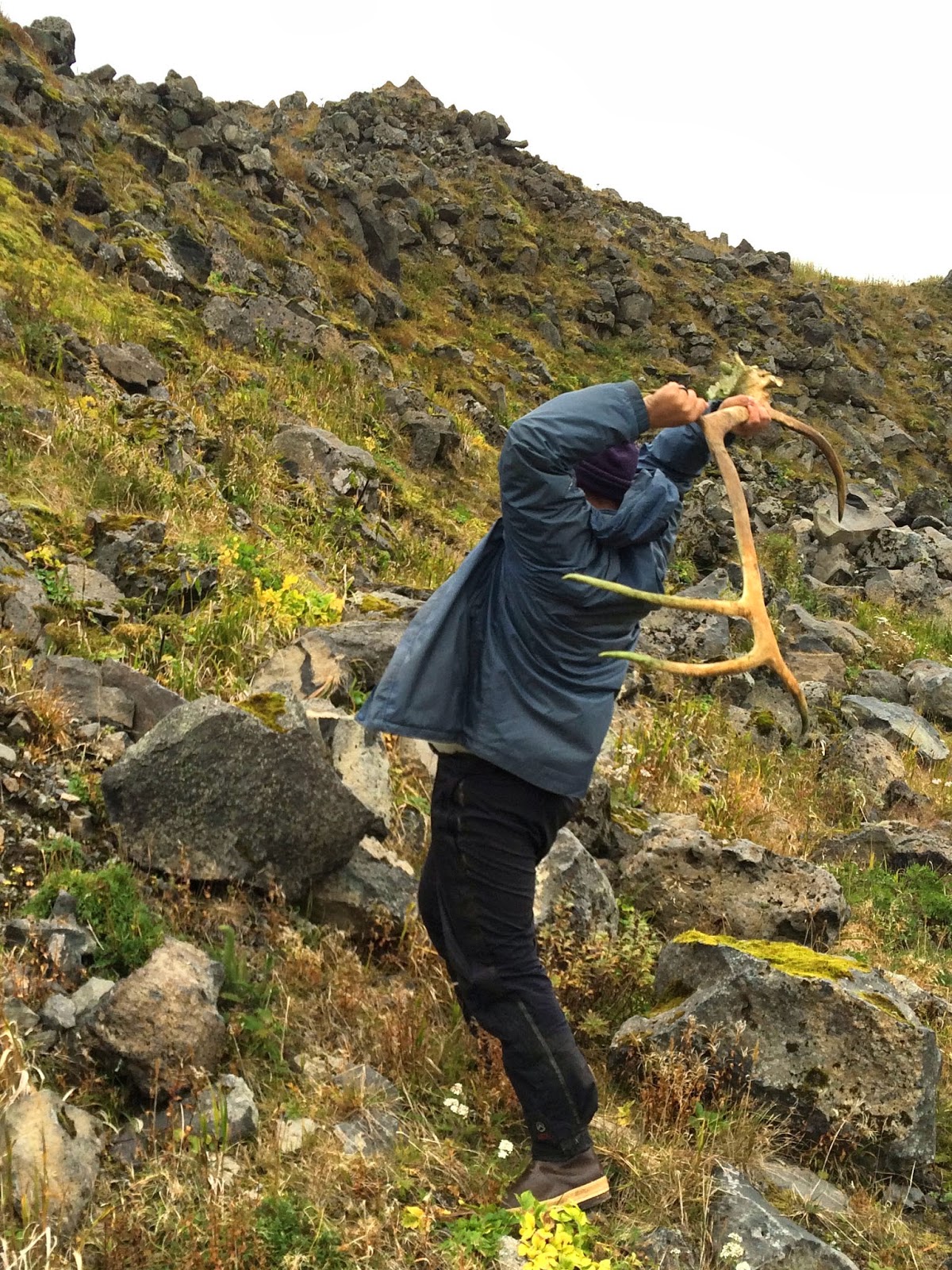 Gavin Bieber employing the ground whacking technique for finding birds.
(No birds were harmed in this photo.)

After a hard day's birding, we'd head out to dinner. Our favorite evening restaurant was, umm, what was it called? Oh yeah, the Trident Fish Cannery. 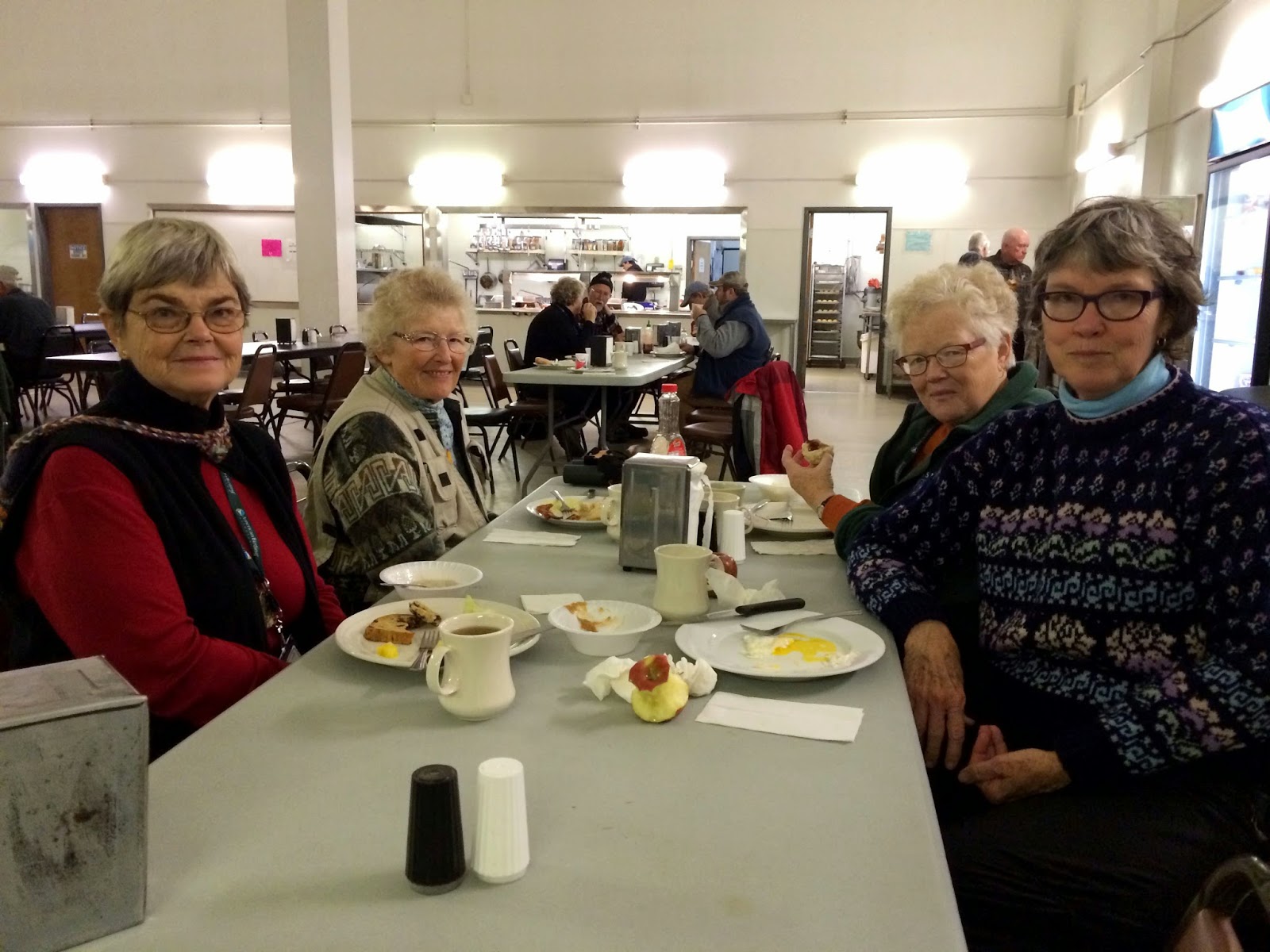 And, we'd often finish a great meal with a trip to the local espresso place... 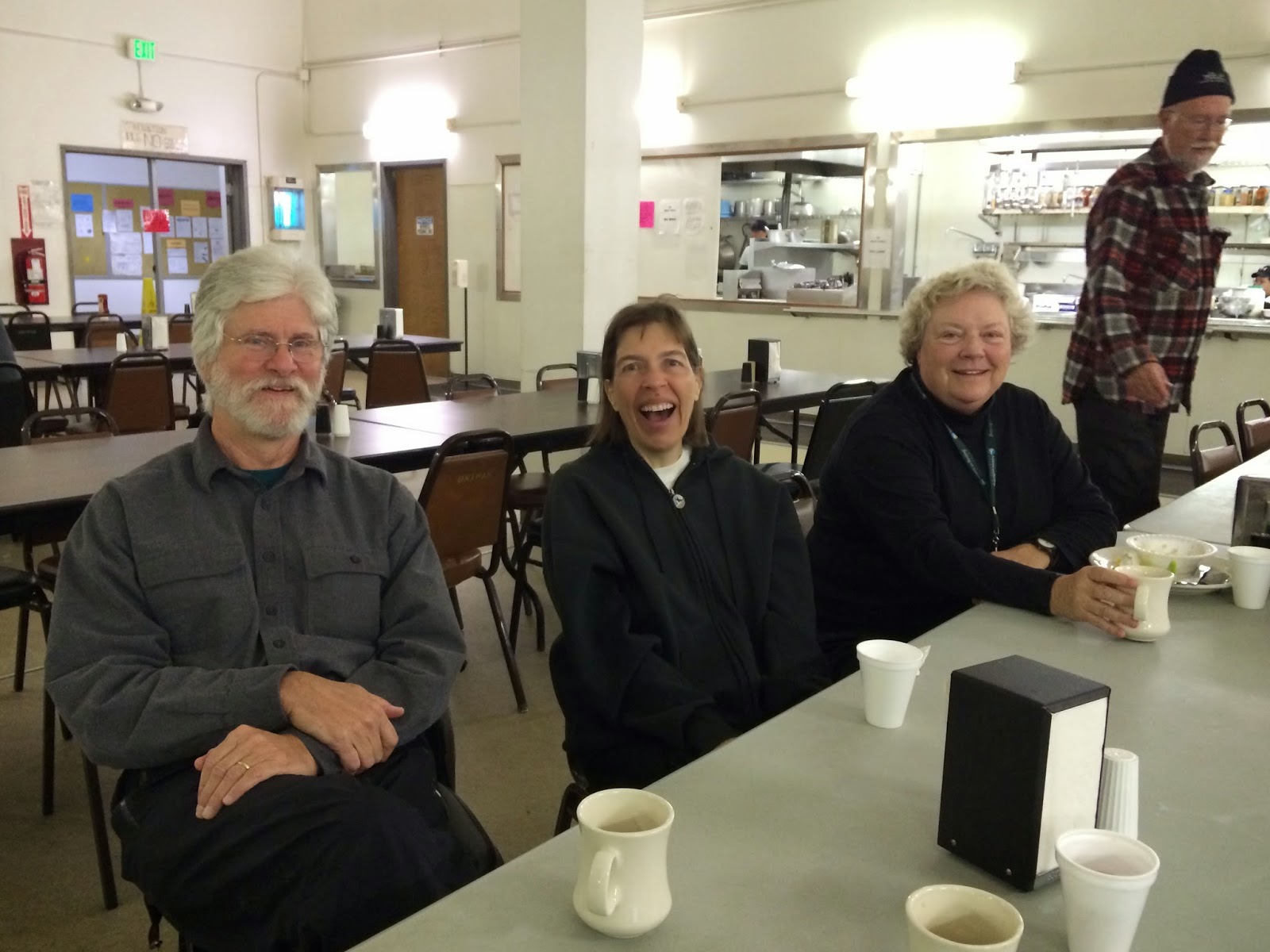 When there were breaks in the birding, we'd hit the local stores. I'm mean store. 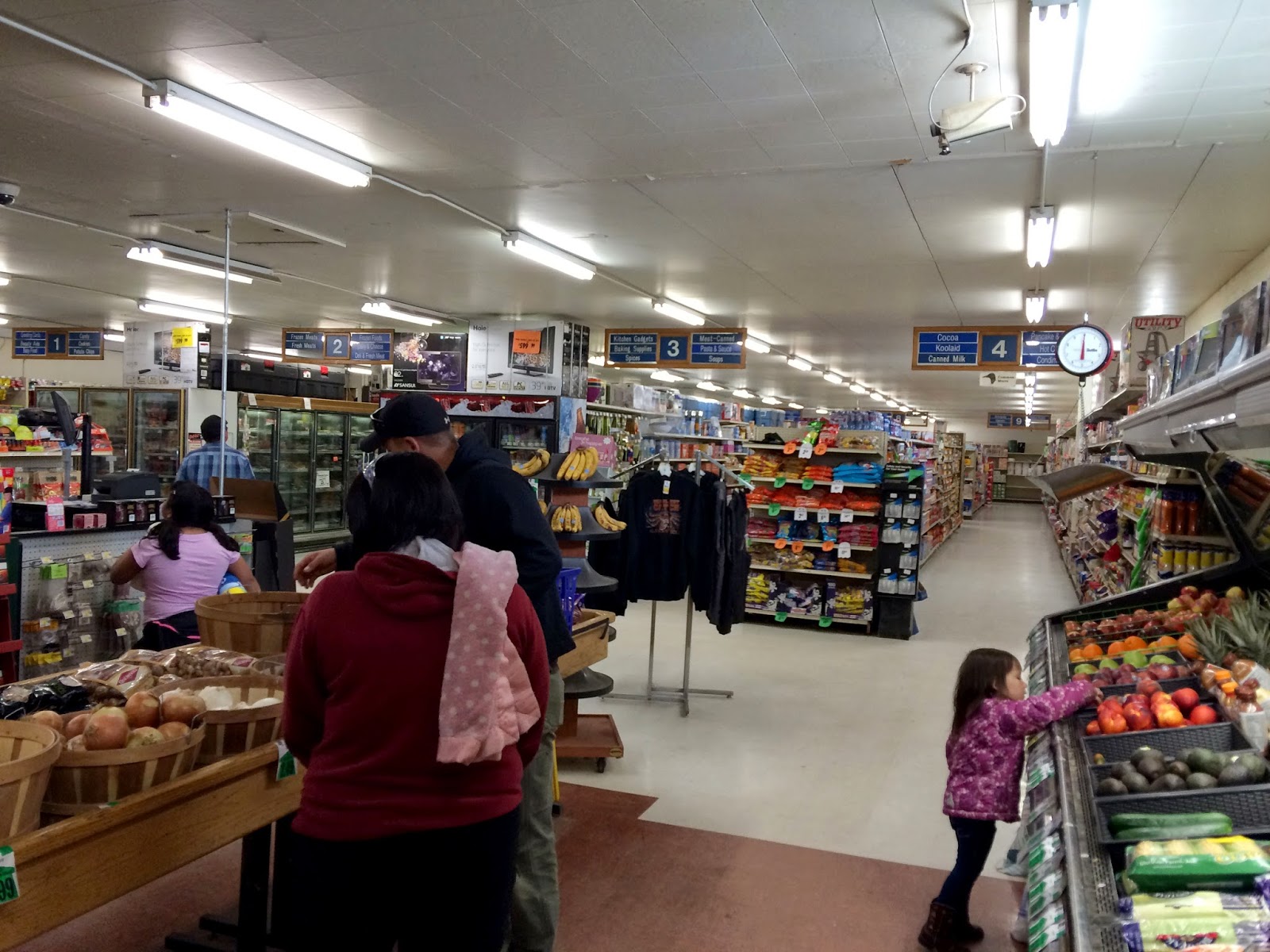 Or check out the wine selection at the local liquor store... 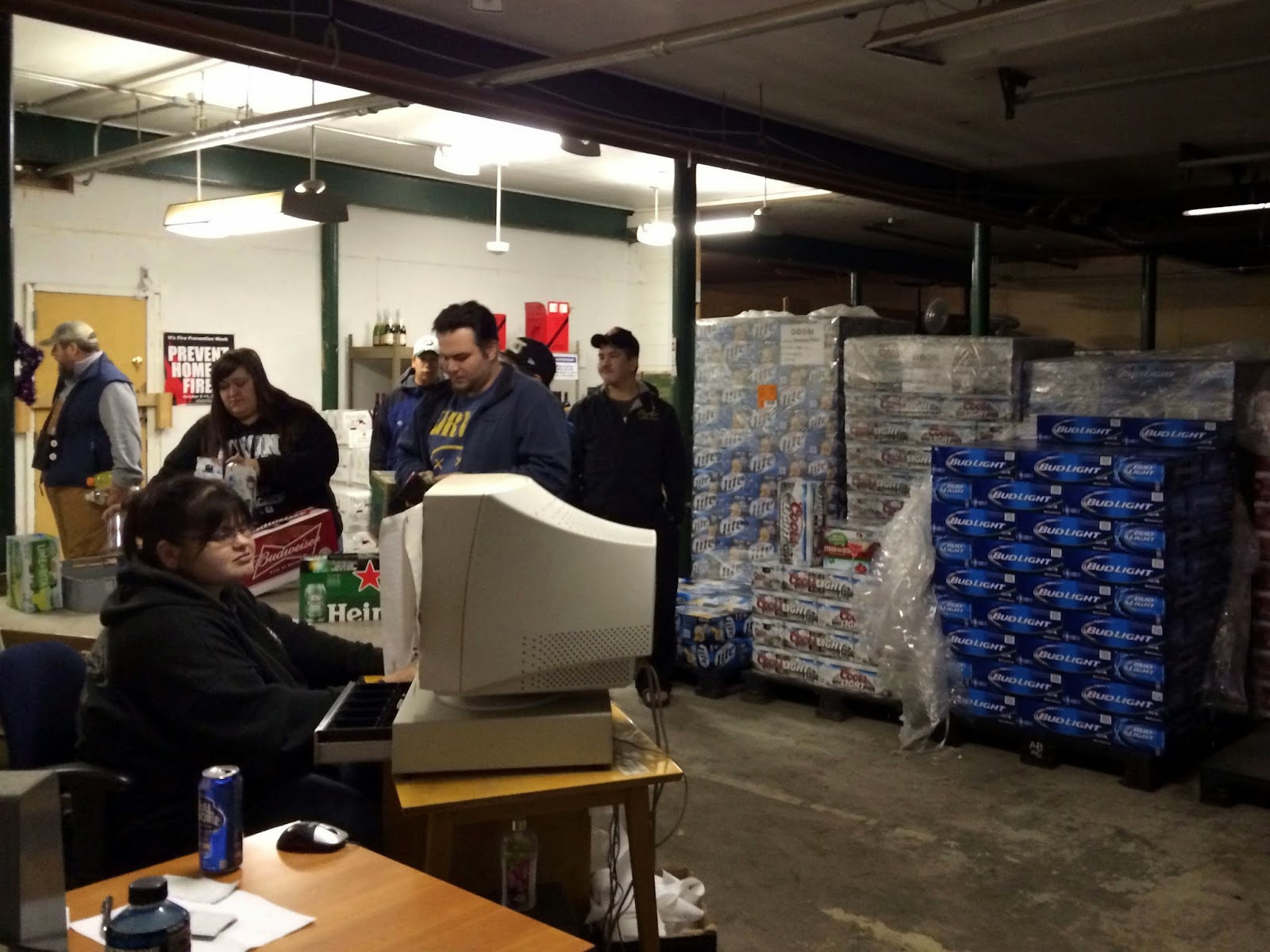 (Seemed to be out of vintage wines this week.)

OK - I hear you. Enough with the intro and the lame humor. What about the birds? What did you see? Well, I saw a lot. But that'll have to wait for the next post. I've just found out there's a new restaurant in town. Apparently they serve Putchkie Pie.
Posted by Unknown at 8:30 AM