California, with its warmth, trees and readily-available lattes, is a welcome break from the remoteness of Alaska. But as I'm sitting in traffic in Los Angeles, going nowhere quickly and surrounded by dufuses honking their horns, the novelty of civilization quickly wears off.

I'm here for a week of birding - a pelagic out of San Diego on Sunday, with a potential back-up mid-week with the ABA rally to the same waters. I'm hoping for Craveri's Murrelet - a diminutive alcid that breeds south of the border. In many years, this bird goes unrecorded in our waters - only rarely ranging as far north as southern California. But this year is, apparently, the best in 10 years for them. But it's getting late - if they're here, they're usually gone by early October. I'm also hoping for Least Storm-petrel, which are relatively common here - that is, if you can find the raft of roosting birds. And then on Friday I have a pelagic out of Bodega Bay, northern California - the premier port for sightings of rare seabirds.

There's a crisp autumnal feel in the air as I walk over to the boat at 5am on Sunday. And it's not without a huge sigh of relief that I find the dock populated by binocular-toting folks - a scene notably absent from the August pelagic on the same boat (Grande), which was cancelled without me knowing.

Our leader for the day is Paul Lehman, who's also just back from Alaska. After I left Paul in Gambell in mid-Sept, he had a pretty amazing end to the month - Siberian Chiffchaff, Lanceolated Warbler, Siberian Accentor, Ross's Full and McKay's Bunting. 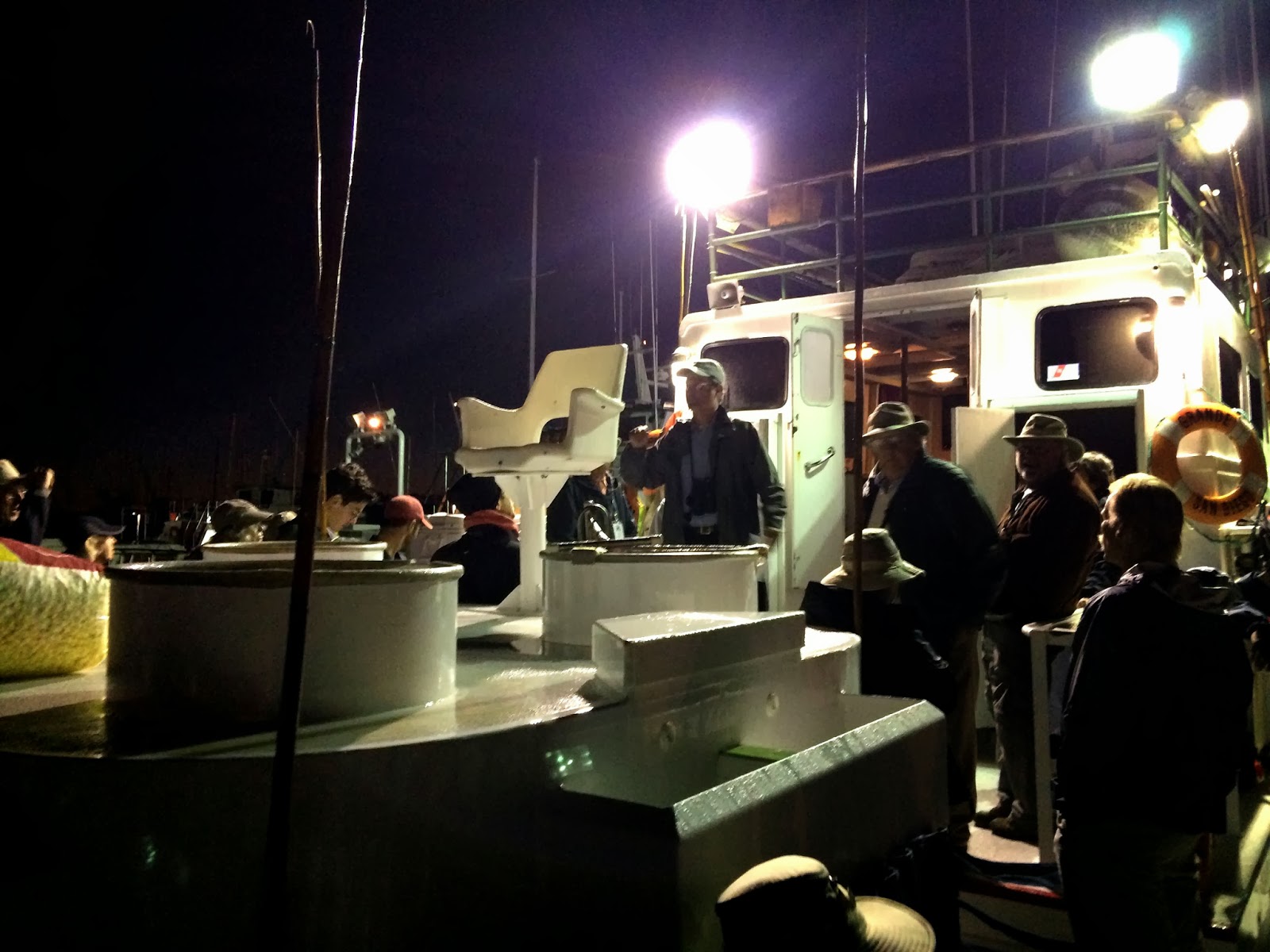 What 5:30am looks like in San Diego!
Paul Lehman introducing us to the boat.

Despite the calm seas (1-2 ft waves) and good viewing conditions, the birds are fewer this time of year. One of the more common birds is Pomarine Jaeger, which seem to come and go continually throughout the day. as well as a real rarity for San Diego at this time of year - a Black-footed Albatross: 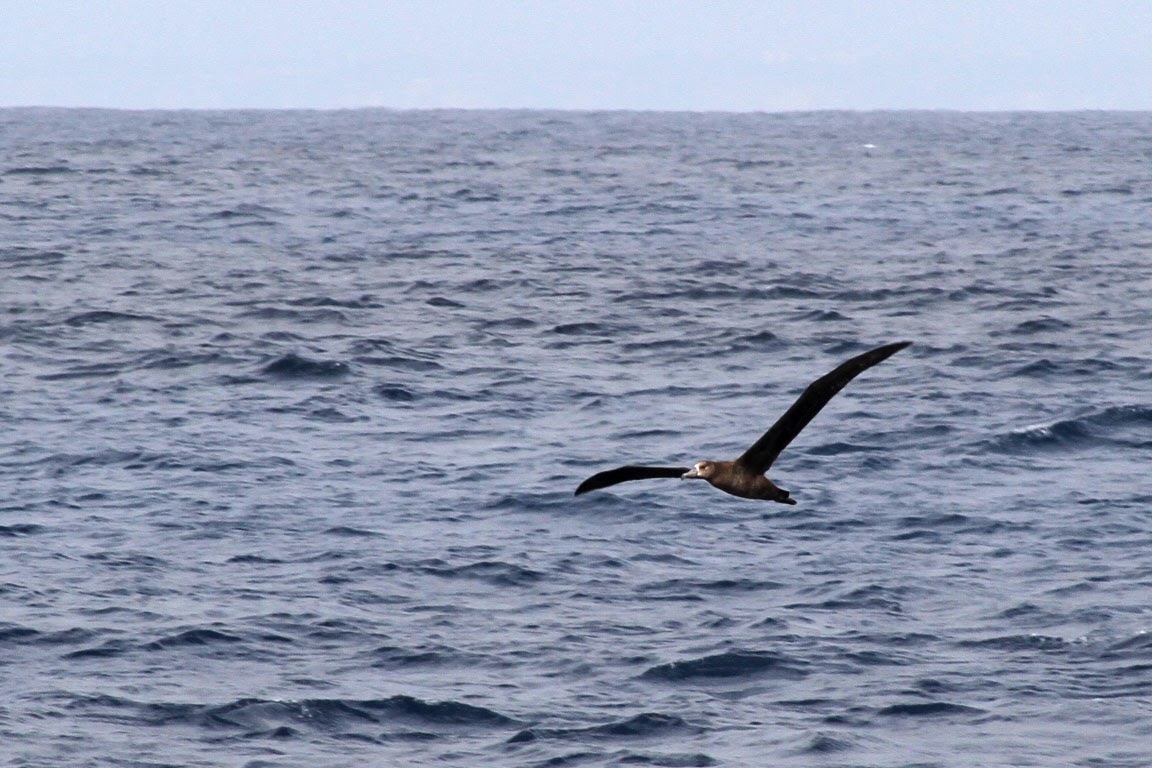 "Large white bird on the water at 12 o'clock!" As we approach, a Red-billed Tropicbird lifts off the water, instantly harassed by a Parasitic Jaeger. 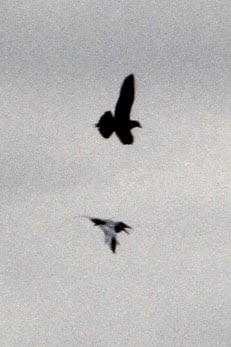 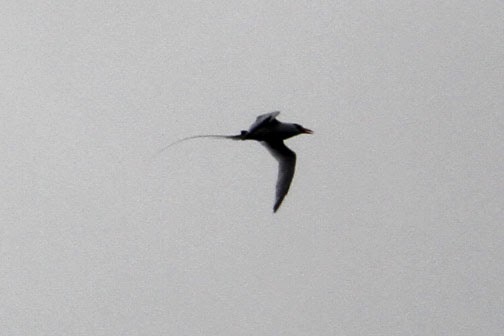 It's a year bird for fellow big year birder, Jay Lehman, and a pacific ocean tick for me - having seen one off Maine earlier in the year.

But still no shout of Craveri's.

We're heading east, to two underwater ridges or uprisings - the 9 mile bank and 30 mile bank. As we approach the latter, we start seeing single storm-petrels. We follow them until they coalesce into a roosting flock, or raft. There's a mix of Least and Black. Leasts are a year tick for me, and easily picked out from the much larger and longer winged Black Storm-petrels. Leasts look like little, fluttery bats, a similarity reinforced by their lack of an obvious tail. 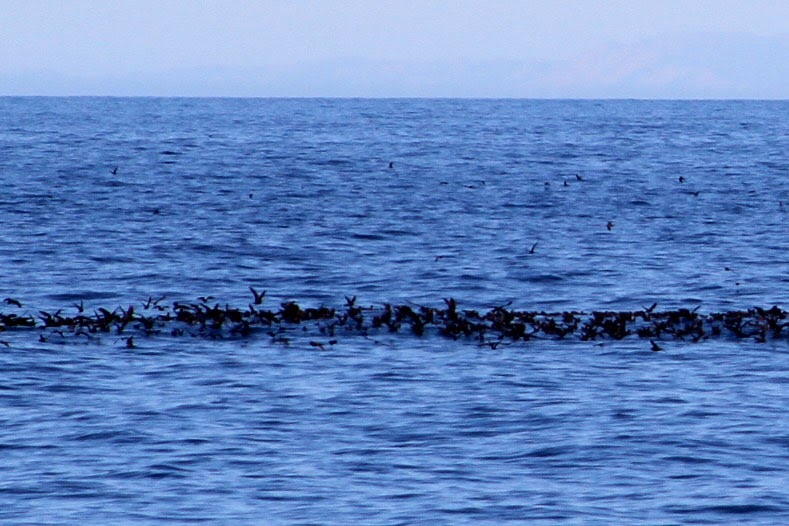 Raft of Storm-petrels - a mix of Black and Least

As we're heading back, we start running into more shearwaters. Among a large flock of Pink-footed, we find a single Flesh-footed - a lovely chocolate-brown bird with pink base to the bill: 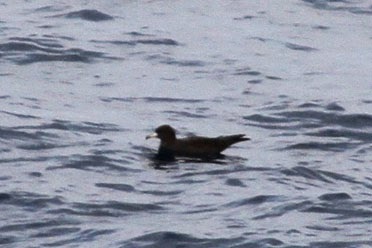 That's a pretty exciting and rare bird - but the reaction is nothing compared to what happened next. Paul spotted a Great Shearwater on the water, and suddenly the boat was alive with panicked birders - many of them local - getting the first record of this species for San Diego county. For most, it was also a state bird. And for others a life bird! 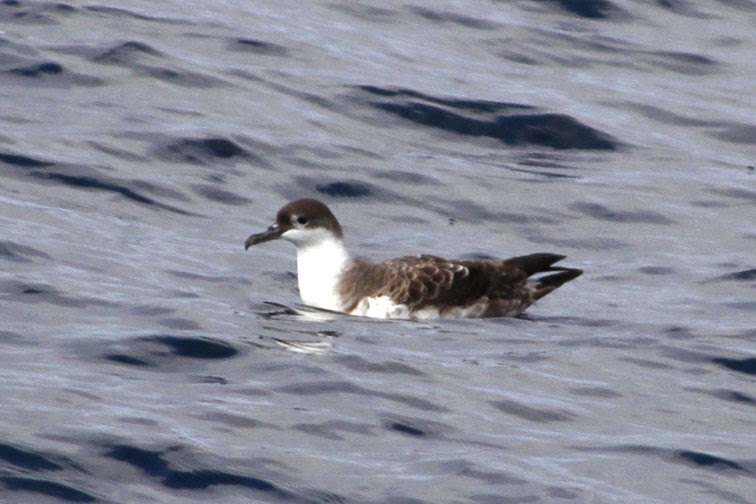 Great Shearwater - the first record for San Diego county and southern California!
These birds are common on the east coast, but very rarely round Cape Horn
and make it into the Pacific Ocean.

To many, I'm sure this is more exciting than a Craveri's sighting - but, alas, on this trip I'll never know.

Fortunately, there's an ABA rally in town this week. And they're running a couple of pelagic trips for the group - essentially going out in the same waters as Sunday. Although the Craveri season is probably over, I decide to try again - and thankfully Paul manages to get Jay and I on the boat on Tuesday.

It's a beautiful start to the day, and full of promise. 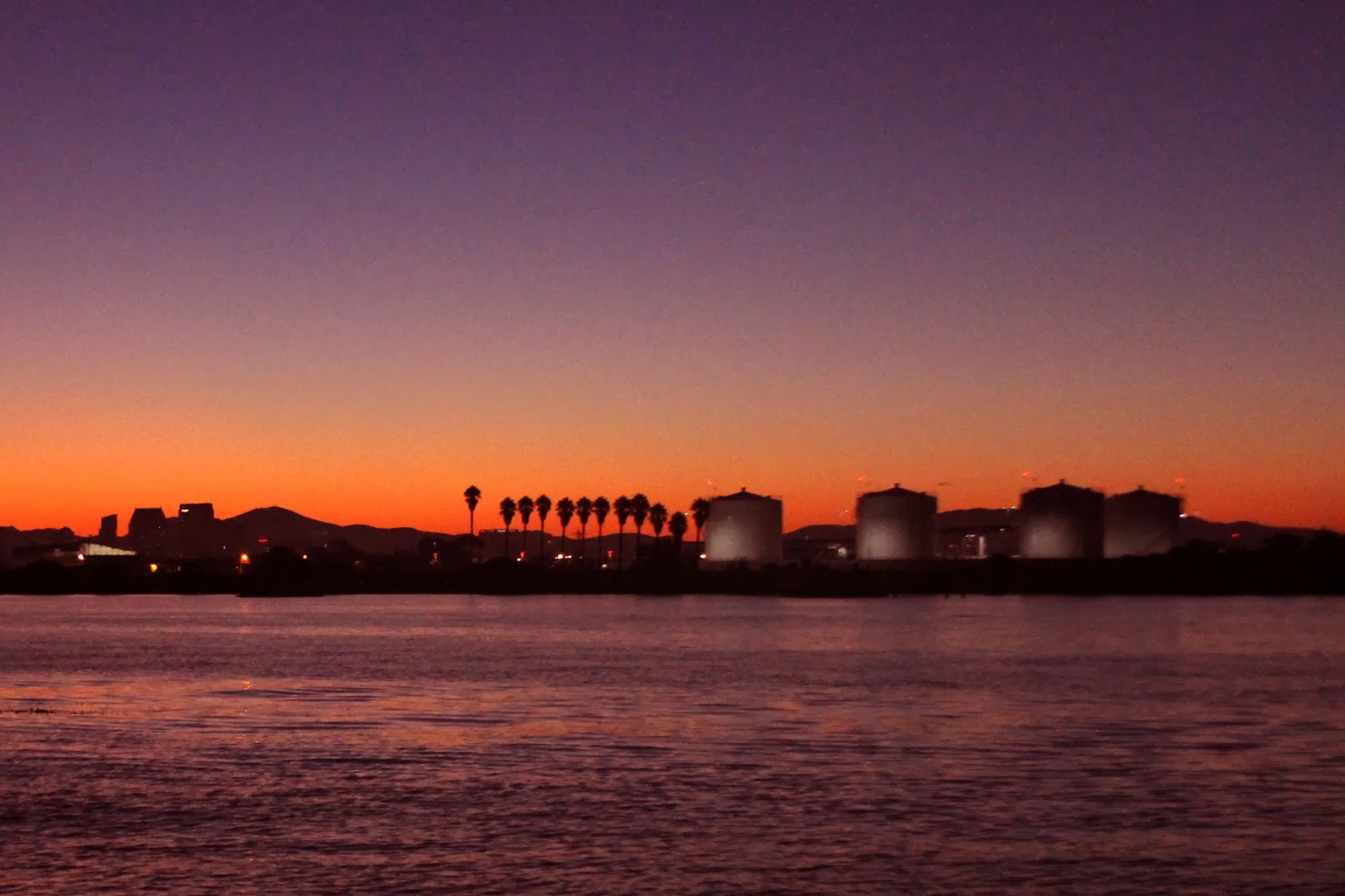 But with each passing minute that we're not getting Craveri's my hopes are slowly turning to despair. (OK - maybe not actual despair.) What if we don't see the birds today? Should I come back again tomorrow on the next boat? Can I stay awake on yet another pelagic? Will they serve fish tacos again on the boat today?

I'm chatting to John Puschock, who's one of the leaders on this trip, when the engines are suddenly cut. John signals me to follow him to the front of the boat. As I'm moving forward, I'm reminded of Paul Lehman's comments about how skittish murrelets can be - and that if we find them, we're not going to be announcing them on the PA system. And as I arrive at the bow, I can hear Paul's unamplified voice, "pair of murrelets at 9 O'clock."

After a mild panic lasting 15 seconds of me not seeing what everyone else evidently is seeing, I spot two tiny black-and-white birds bobbing on the water. Murrelets! The captain gently nudges the boat towards the birds. I'm expecting them to fly any minute, and reveal their diagnostic underwings (Scripp's and Guadalupe, the only other birds likely to be confused with Craveri's, have bright white underwings.) But we keep getting closer and closer, until eventually the birds are right alongside the boat. So close we can hear them vocalizing - a cicada-like rattling. 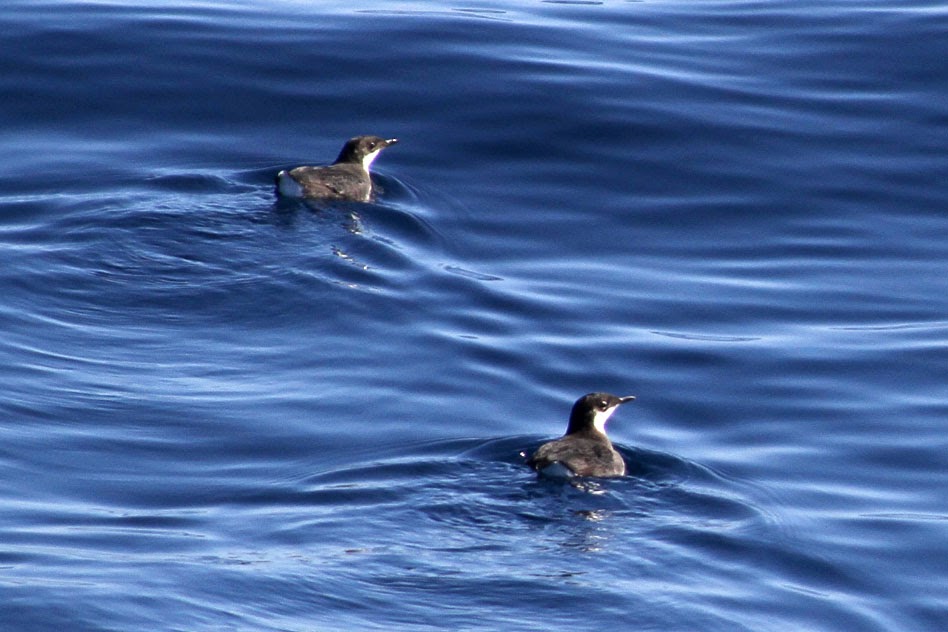 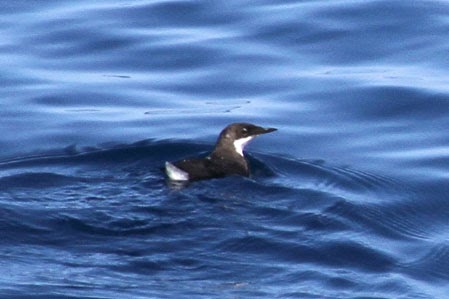 Craveri's Murrelets. At close range, the black upperparts have a brown ting.
The black on the head comes down below the bill, and the eyes are framed by white arcs.

There's a quiet excitement among all the birders pushed up against the railing, taking in the incredible and close view. For many, including John Puschock, it's a life bird.

No two days are the same in pelagic birding. Even taking the same course as the previous day will produce different birds. Today we had Craveri's, which were new, but no Red-billed Tropicbird, Flesh-footed or Great Shearwaters that we had Sunday. That's why with pelagics you need to take more than one trip. And this was a great demonstration. An ever greater demonstration of this principle happened the very next day - when the ABA group saw not only Craveri's again, but also saw the rare Guadalupe Murrelet - the southern form of the previously-named Xantus's Murrelet, and a bird I've never seen. Now that would have been a great boat to be on. (And I bet they had fish tacos too!) 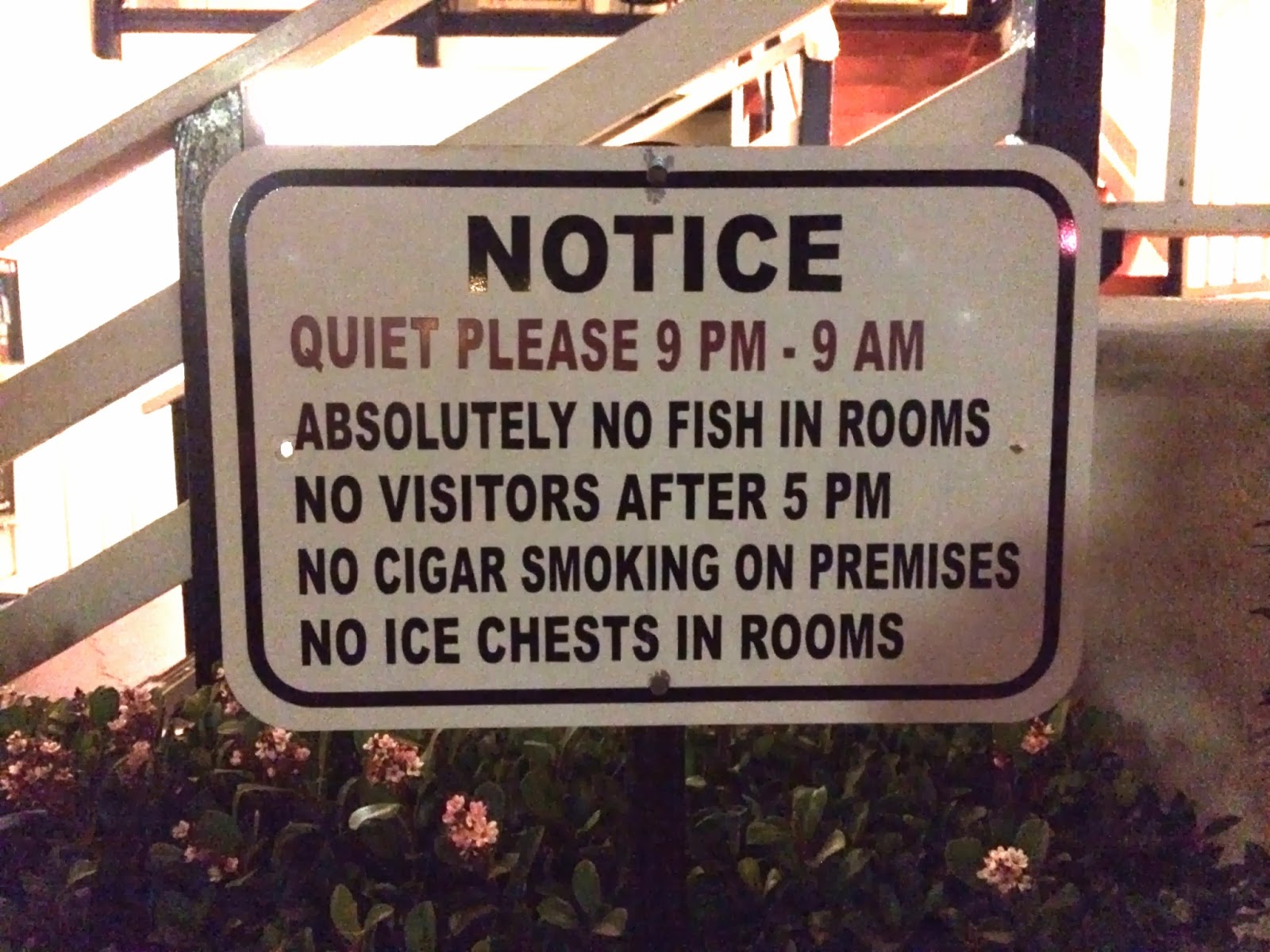 The Dolphin Motel - a great place to stay in San Diego. Unless you're a fish.