THE LAST OF THE PUTCHKIE BIRDS - FINAL DAYS ON ST. PAUL

There may not be pumpkins on St. Paul, but fall has finally come to the Pribilof Islands... 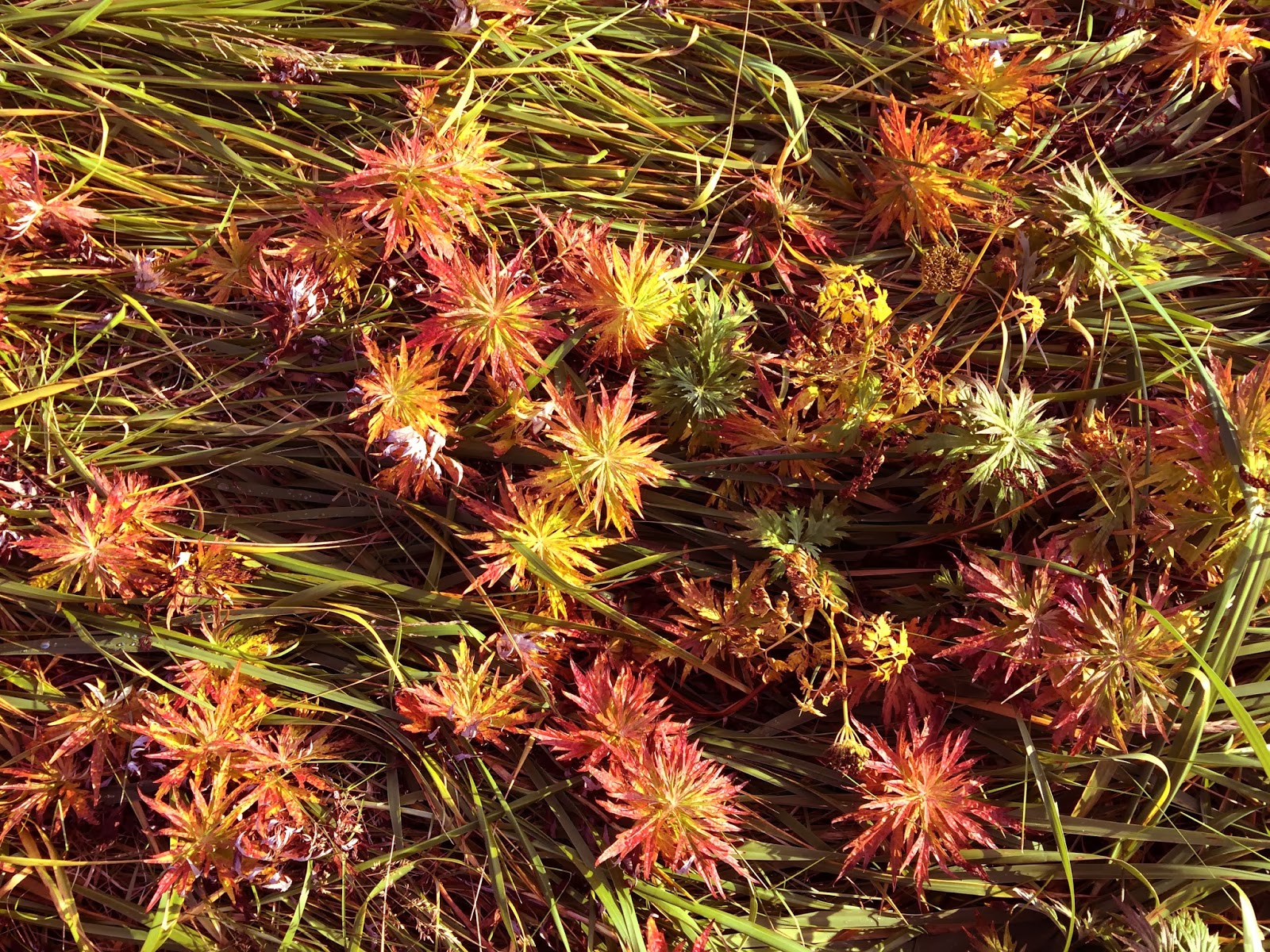 And it's been a great fall for me - a potential ABA first (Common Redstart) this week, as well as 5 new year birds last week. And on this, my 3rd and final trip to St Paul this year, the putchkie is more alive with birds than I've ever seen it... 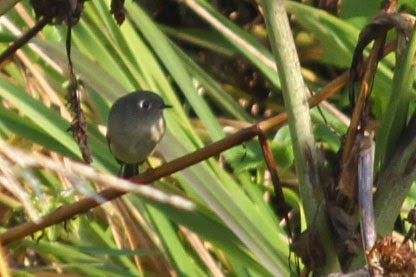 As well as Red-throated Pipit, Fox Sparrow, and even a shorebird... 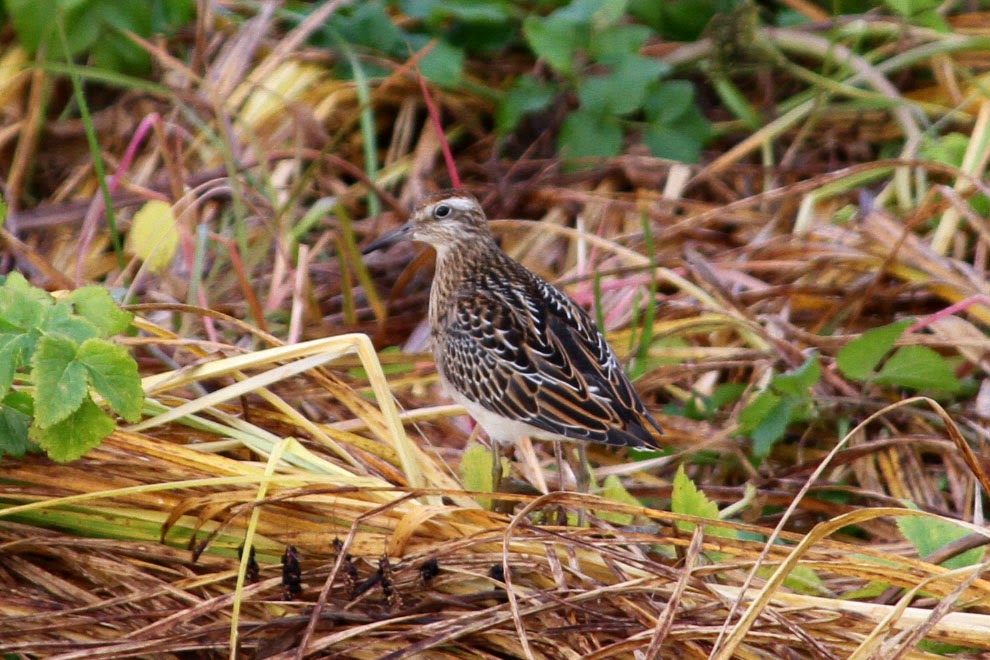 Although one of our best putchkie patches was flattened overnight... 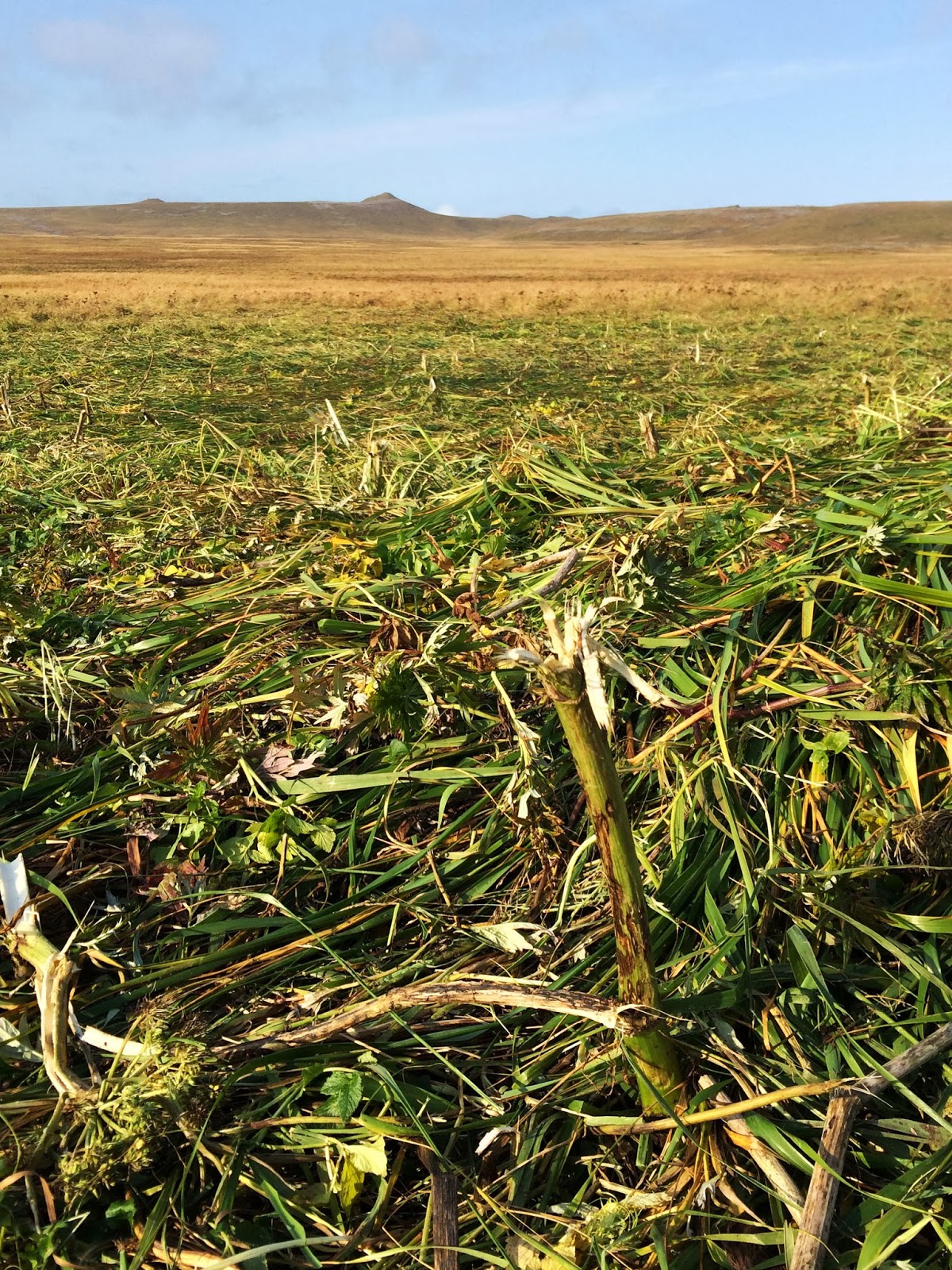 It wasn't long before we caught up with the culprits - one of St. Paul's herds of introduced reindeer 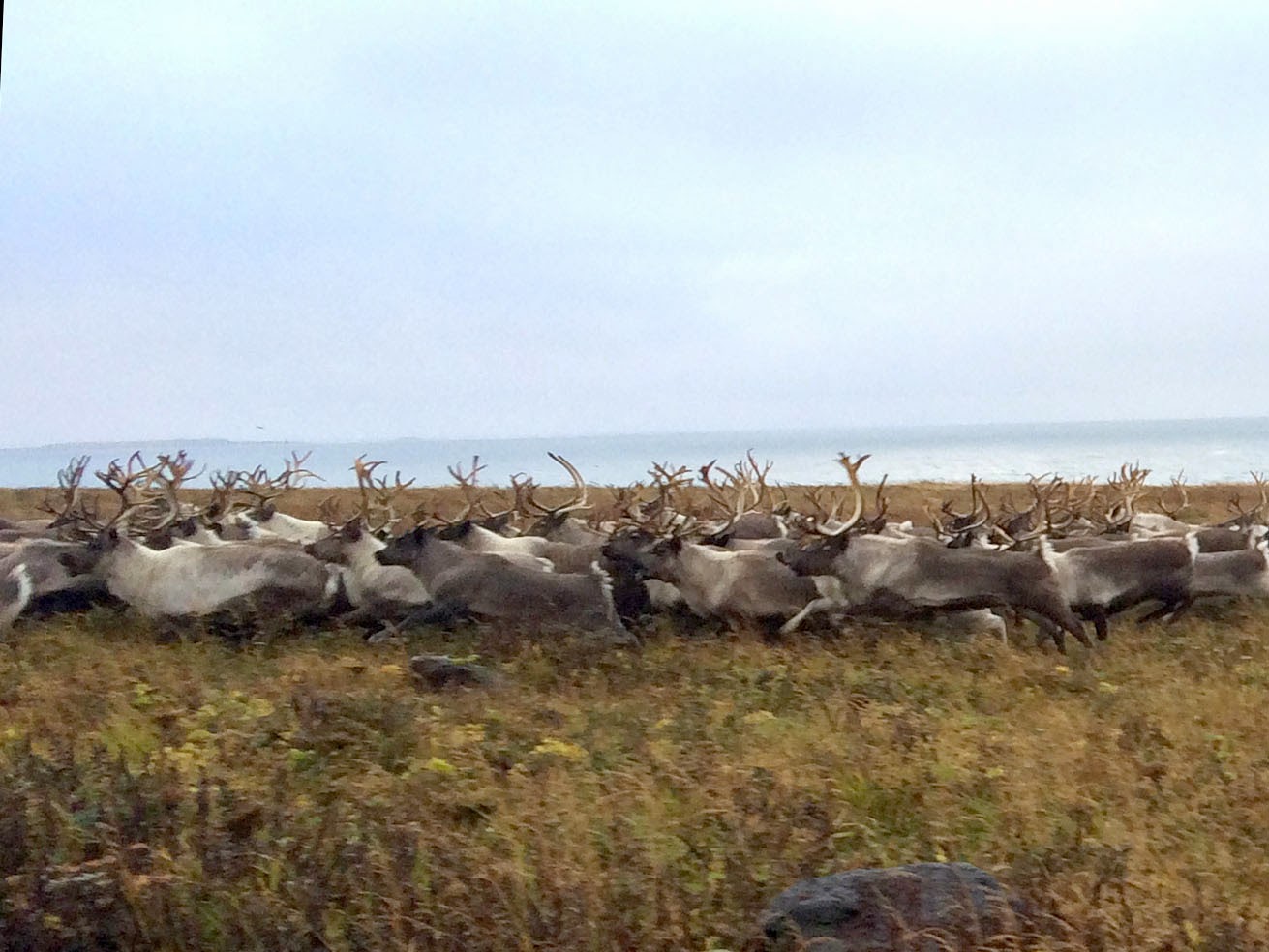 The day after the Redstart find is our last day on the island. And the weather is terrible - driving rain and strong winds. I'm guessing we're not going to be finding many birds in this. Before heading to the airport to check in, Doug decides to swing by the cliffs to check on the sea (strong SE winds tend to push pelagic birds onto the coast.) As soon as we park, we can see a thick line of Short-tailed Shearwaters streaming just offshore. "Everyone out!" shouts Doug - this is our best chance for Mottled Petrel - a lifebird for half of us. It takes Doug about 2 minutes before he spots one. They're hidden among the slightly larger shearwaters, their gray upperwings camouflaged perfectly against the turbulent, leaden sea. Fairly distant views, but a very nice last day surprise! 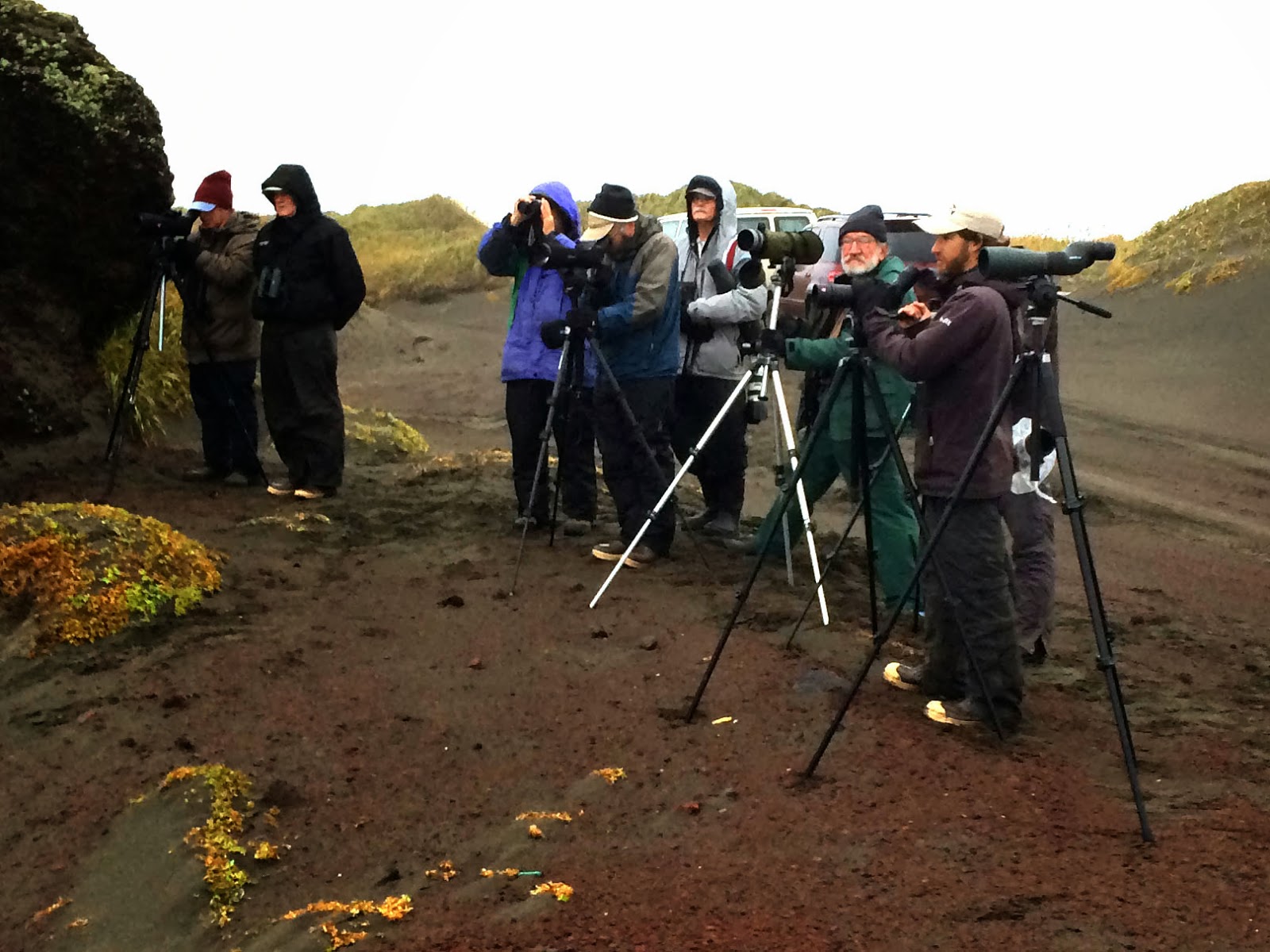 What a great bird to end our trip here. Or is it? As we're heading towards the airport I have a strong feeling that I should stay. After yesterday's Redstart, what else might be on the island?
I've learned this year to follow my instincts - especially in coming back to St. Paul twice this fall, which I hadn't planned to do at all. So, when I get to the airport, I manage to switch my ticket for Friday, giving me 2 more days on the island. It's a risk - it means I'll miss the pelagic out of Ventura, CA on Saturday, but still make the San Diego pelagic on Sunday (assuming I can get off the island on time.) And I won't be the only birder still here - Norm Budnitz is arriving on the plane that everyone else is leaving on. I had fun birding with Norm in Gambell this fall.

Later that day, after the plane has left, we manage to refind the Common Redstart making Norm only the 10th birder to see this bird in the ABA region. We also have a fly-over White-tailed Eagle at the same spot. But nothing new for me.

Most of our days on St. Paul are the same - we cover the same birding hotspots, hoping for something new to have dropped in. A staple among hotspots is the crab pots - which we check every day. With no trees on the island, these stacks are the nearest approximation - offering shelter and elevation. Despite some amazing finds over the years, they've been quiet during my 3 visits. But that doesn't stop me getting excited each time we approach - the anticipation building as one person zigzags through the lines of crab pots, while the rest of us watch to see if any birds are flushed. Today, it's my turn for the zigzagging. I'm not even a quarter of the way through when Scott raises his binoculars and shouts out excitedly, "Eyebrowed Thrush!" 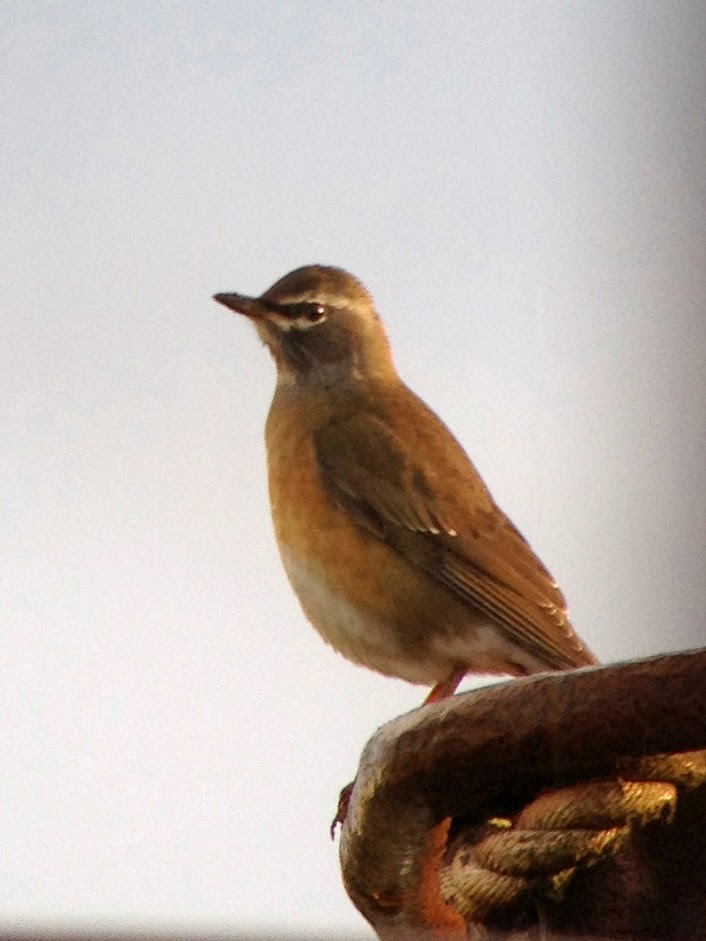 Eyebrowed Thrush - a vagrant from Asia
High on my wish list!

And that's it - my last bird of the trip, and my last bird for the Pribilofs. I've had a great time here from the melting snows of the spring and the arrival of the nesting alcids, to the burned foliage of the fall, and the wayward Asian vagrants. I've seen some amazing birds, and birded with some amazing people. I'll leave with a lot of happy memories.

And a lot of that success is thanks to the guides, Scott and Doug (and Cameron Cox in the spring), for working so hard every day to find good birds. Thank you guys! 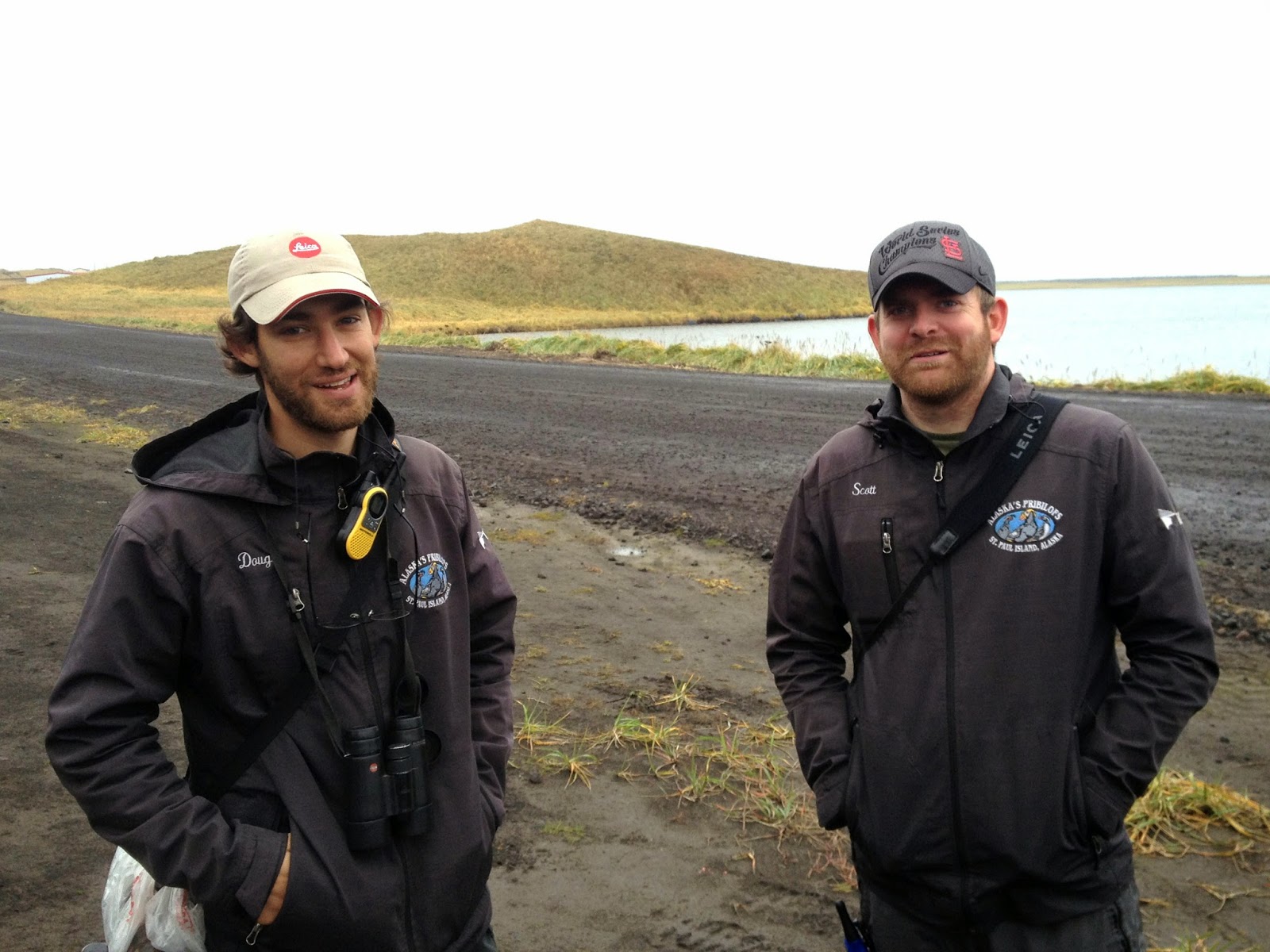 As for me - I'm heading south to California and a couple of pelagic trips. Looking forward to seeing trees, drinking lattes, and wearing something other than waterproof birding gear!